Having explored the main centre of Edinburgh yesterday we went a little further afield today, out to Rosslyn and Holyrood, to see a few more of the sights this city is famous for. Top of the list was Rosslyn Chapel, one of Scotland’s most popular religious sites and one of the most intriguing churches we’ve seen to date.

Rosslyn Chapel is a small church, situated in the village of Rosslyn just outside Edinburgh’s city limits, was made famous by the book “The Da Vinci Code” (hence its popularity amongst the visiting hordes). Long before Dan Brown used this as his inspirations, however, mystery surrounded the chapel and its intriguing array of carvings. It was the church’s archaic association with the Knight’s Templar, not the more recent pop culture reference, that captured our interest and had us setting off early this morning* on a bus bound for the village of Rosslyn.

*The chapel’s popularity has sky-rocketed since “the Da Vinci Code” was published and subsequently made into a movie. We were waned that, as a consequence, the crowds can get rather large. Given how small the church is we didn’t really want to be squashed in there with 1,000 other people and so intentionally got out there early, to be there when it opened. Seemed this was a good tactic as there weren’t many other visitors there with us and we got to enjoy the unique ambience of the place unhindered. 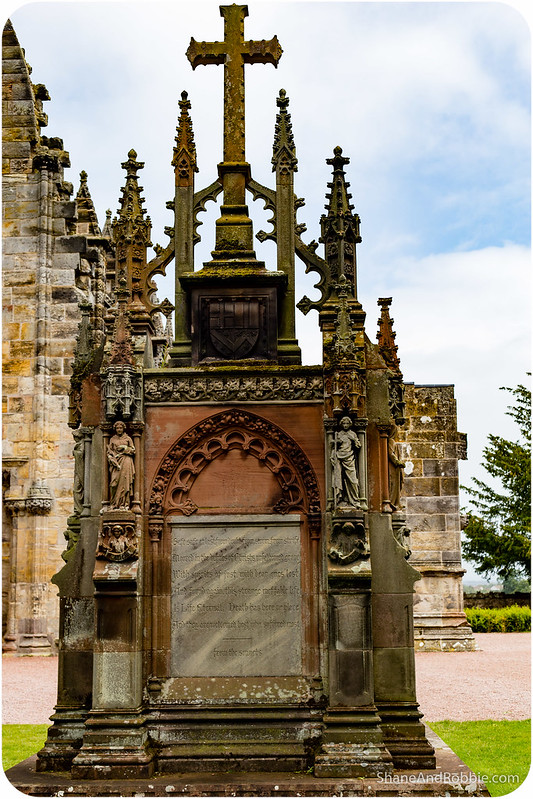 Rosslyn Chapel was founded in 1446 by William St Clair and remains privately owned by the family. It’s set in the beautiful countryside just outside Edinburgh and is quite an attractive structure from the outside. The rose, yellow, and grey stone the chapel is made of makes for interesting shades and tones, and the intricate carvings around the windows and adorning each corner of the building were fascinating. 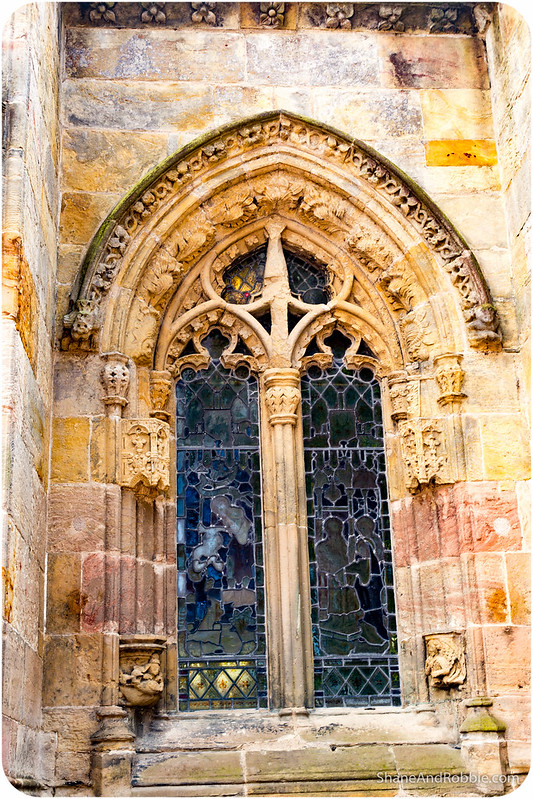 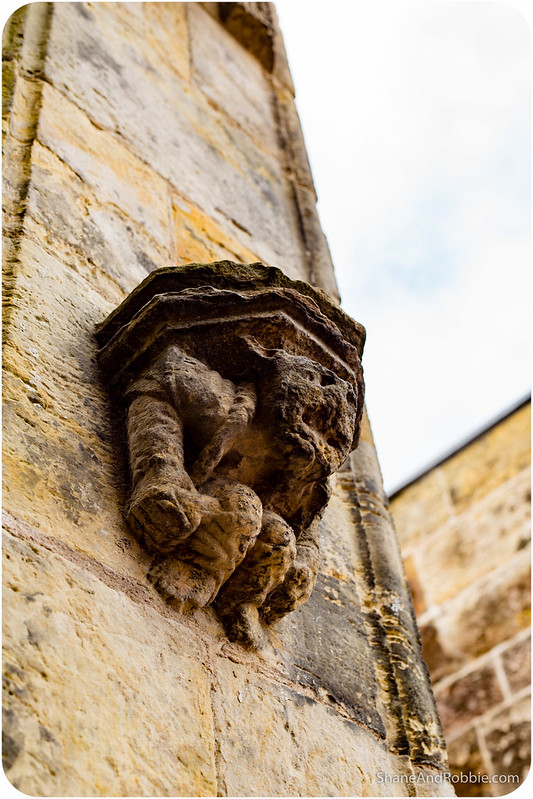 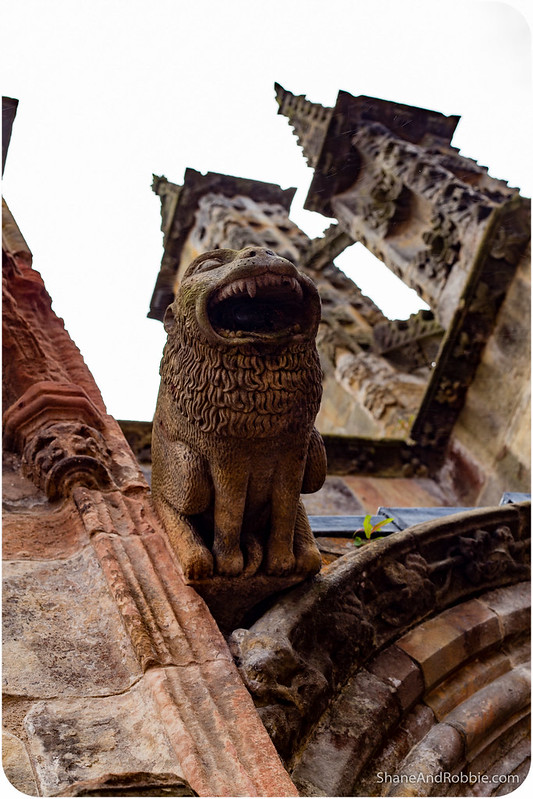 But stepping inside the chapel the wonder of Rosslyn’s Chapel really came to light. Every available surface was covered in carvings, rich in symbolism. There are more than 100 carvings of “Green Men*” in and around the chapel. Other carvings represent plants, including depictions of wheat, strawberries and lilies. There’s even some carvings in the chapel that purportedly represent ears of corn, a plant which was unknown in Europe at the time of the chapel’s construction. One of the enduring theories about these carvings is that they support the idea that Henry St Clair, William’s father, traveled to the Americas well before Columbus along with other Knights Templar.

*”Green Men” are recognised pagan symbols of growth, lushness, and fertility. Depicted with greenery all around them, they’re often viewed as a male counterpart to Mother Nature or female fertility spirits/gods.

The mysteries associated with Rosslyn Chapel don’t end there, however. Beneath the ornately carved chapel lies a stone crypt within which, according to legend, the treasures of the Knights Templar are buried*. Depending on whom you ask, that treasure is the Holy Grail, sacred scrolls from the time of Christ, a fragment of the cross on which he died, or even his embalmed head, secreted out of the Holy Land as the Templars fled prosecution 700 years ago.

*It was this myth that Dan Brown used as the basis for his book.

Allusions to Freemasonry and secret societies are also supposedly found in amongst the chapel’s carvings. Theories abound about the hidden meanings of the intricate stonework, especially since William Sinclair, the chapel’s original sponsor, was supposedly the Grand Master of the Scottish stonemasons, and subsequently several other members of the Sinclair family have held this position.

Note: You’re not allowed to take photos inside Rosslyn Chapel but the following photos from their official website (www.rosslynchapel.com) should help give you an idea of the amazing interior of the church.

The chapel’s alters were destroyed in 1592 during the Scottish Reformation, and the chapel was abandoned, gradually falling into decay. It was only restored in the 19th century after Queen Victoria visited and expressed a desire to the Sinclair’s that it should be preserved. The restoration works carried out have been done beautifully, making Rosslyn Chapel a wonderful place to visit (even if you’re not a “Da Vinci Code” fan or a conspiracy theorist). 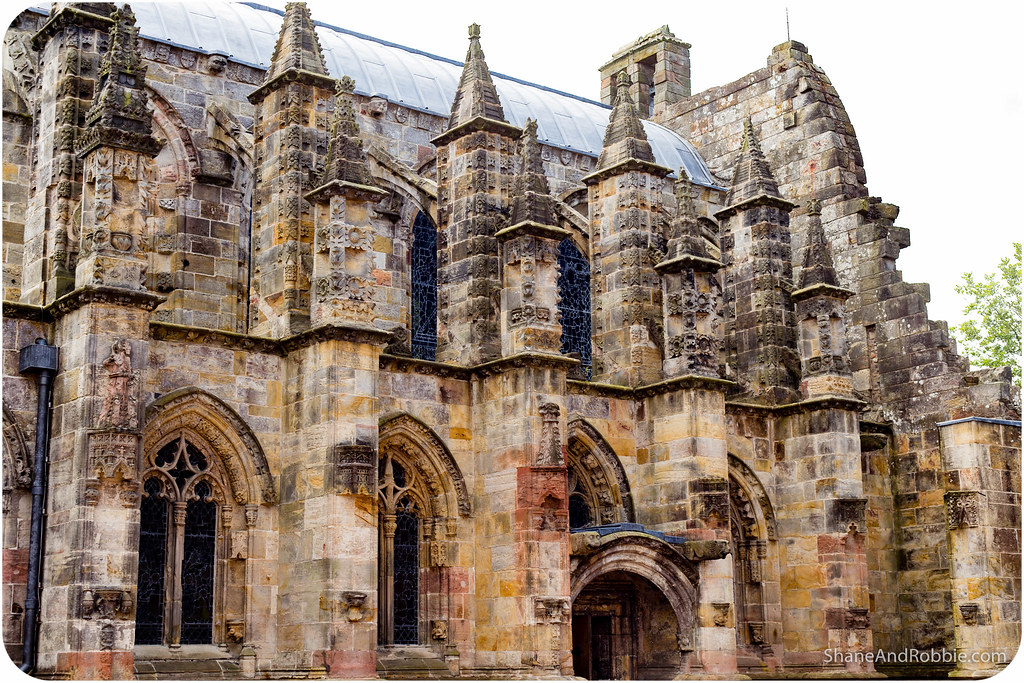 Having sated our thirst for religious (and pagan) iconography we hopped on the bus back to Edinburgh and headed down The Royal Mile towards Holyrood Palace and its surrounds. 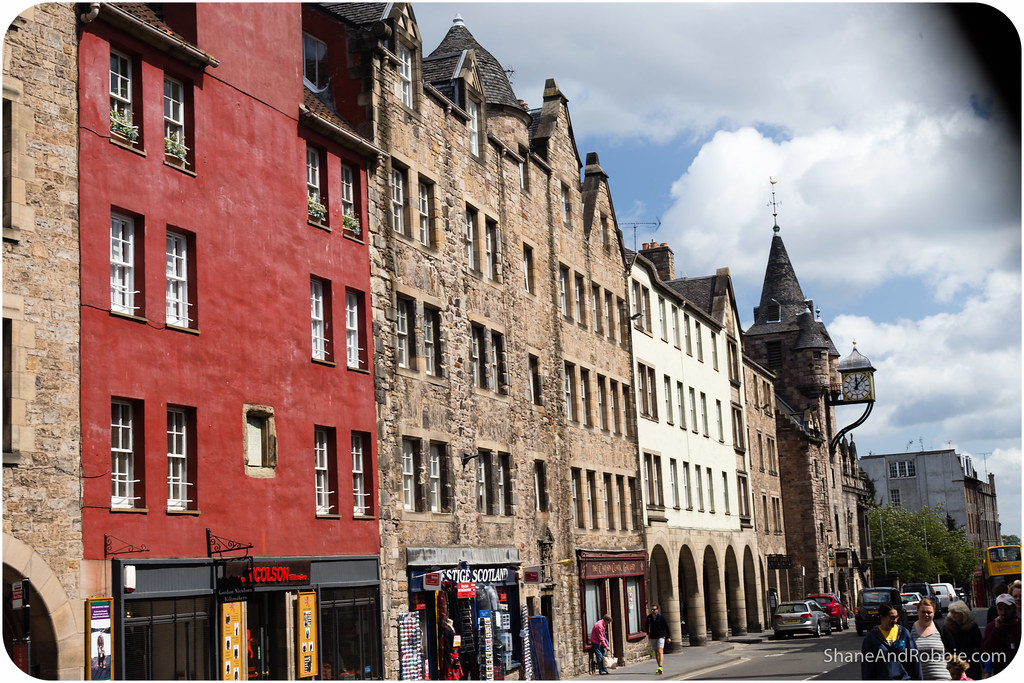 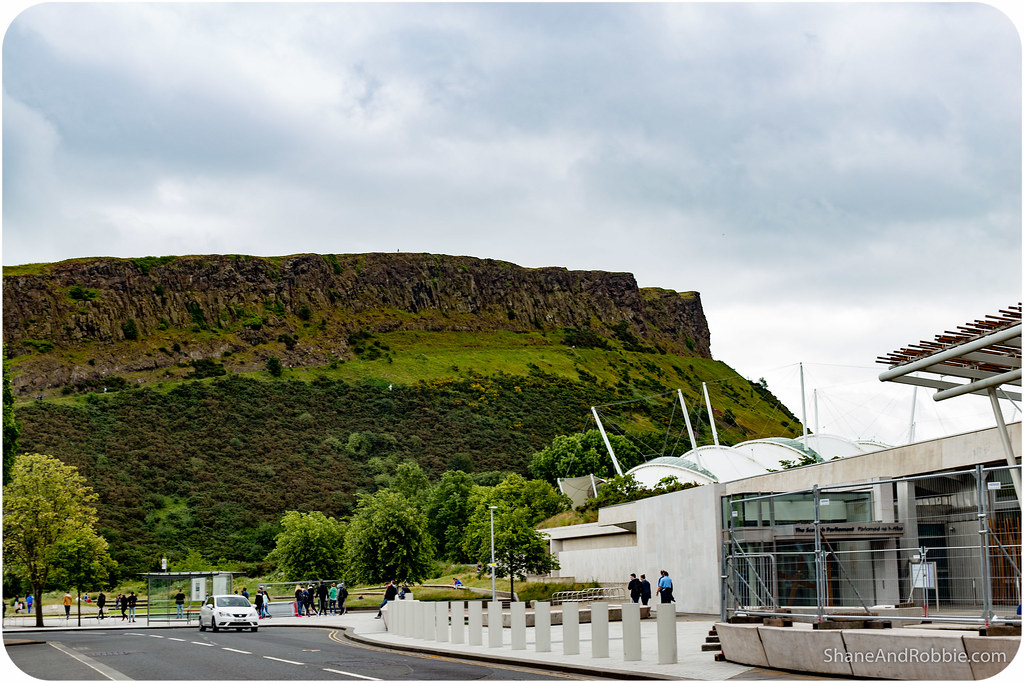 Holyrood Palace is the official residence of the British monarch in Scotland. It’s located at the eastern end of The Royal Mile in Edinburgh and was built in the 1670s in the Baroque style. 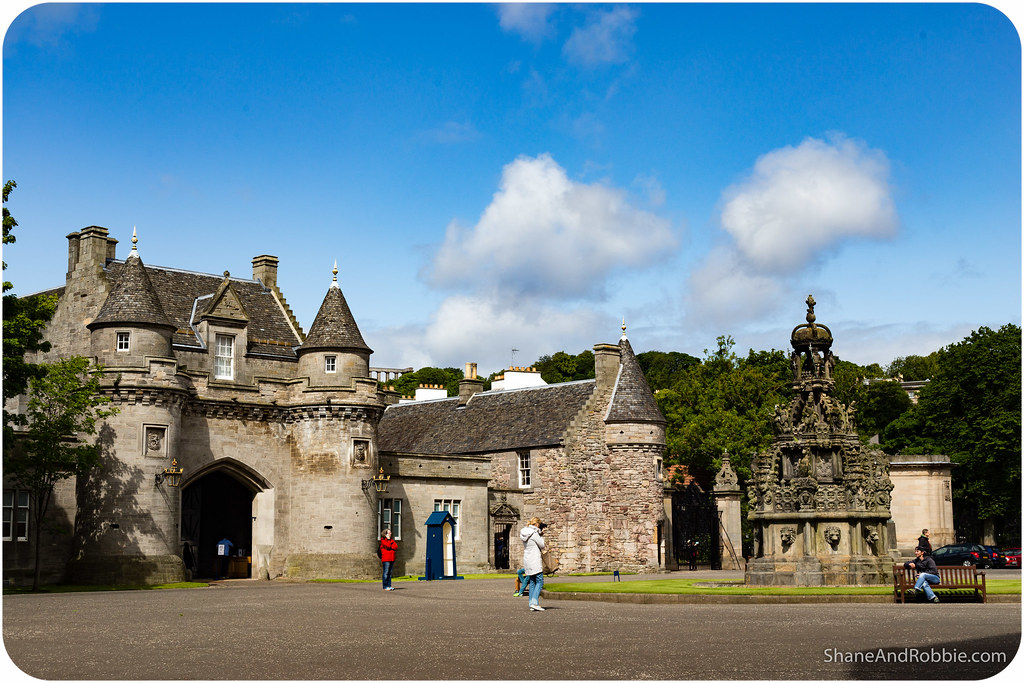 One week of the year, in late summer, the palace becomes the residence of Queen Elizabeth and Prince Philip, and the setting for a range of official engagements and ceremonies. As you would expect from a palace that is actually still functioning as a palace (even if only for one week of the year), it was a pretty grand kind of place. 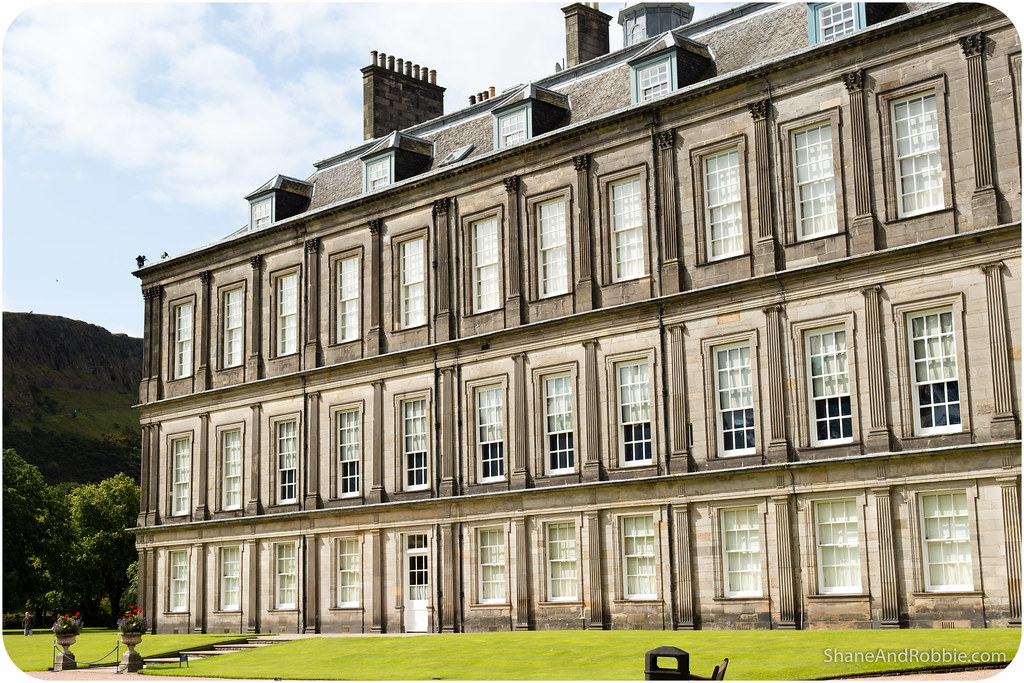 When the Queen’s not in town parts of the palace are open to the public, and we joined the crowds keen to have a nosey through the Royal Apartments and the formal reception rooms. As is commonplace in these kinds of castles we couldn’t take any photos inside the palace, but trust us, Liz and Phil live in style when they’re up here every August. 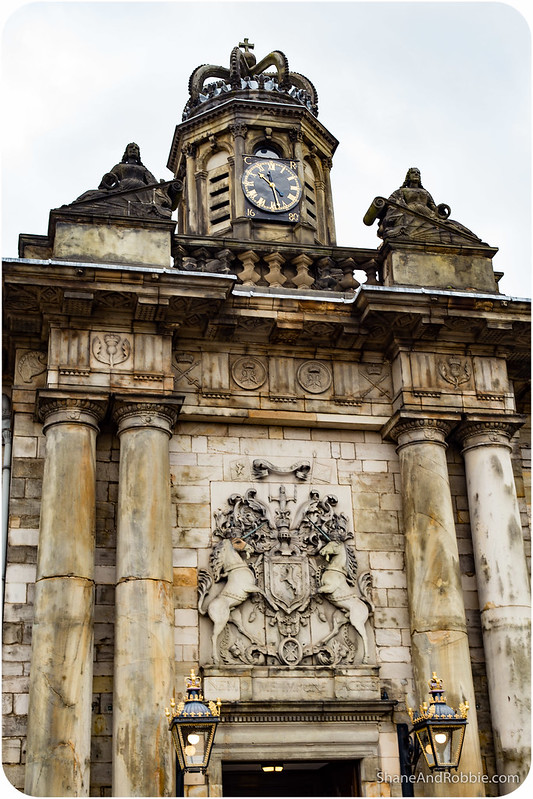 Beside the palace are the ruins of Holyrood Abbey. The abbey was founded in 1128 by King David I of Scotland. Legend has it that in 1127, while King David was hunting in the forests to the east of Edinburgh, he was thrown from his horse after it had been startled by a stag. He was saved from being gored by the charging animal when it was startled by the miraculous appearance of a holy cross* descending from the skies. As an act of thanksgiving, the king founded Holyrood Abbey on the site of the miracle.

*”Rood” is an old word for the cross which Jesus Christ was crucified upon; the name “Holyrood” therefore effectively means “holy cross”. 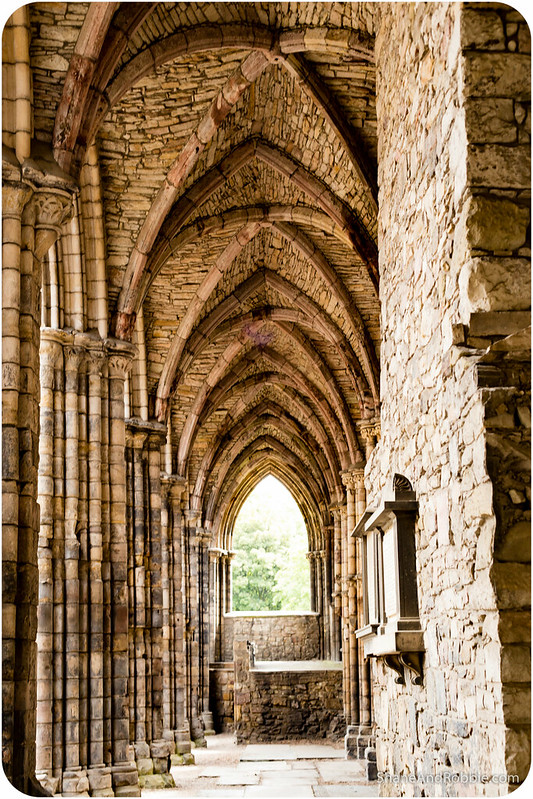 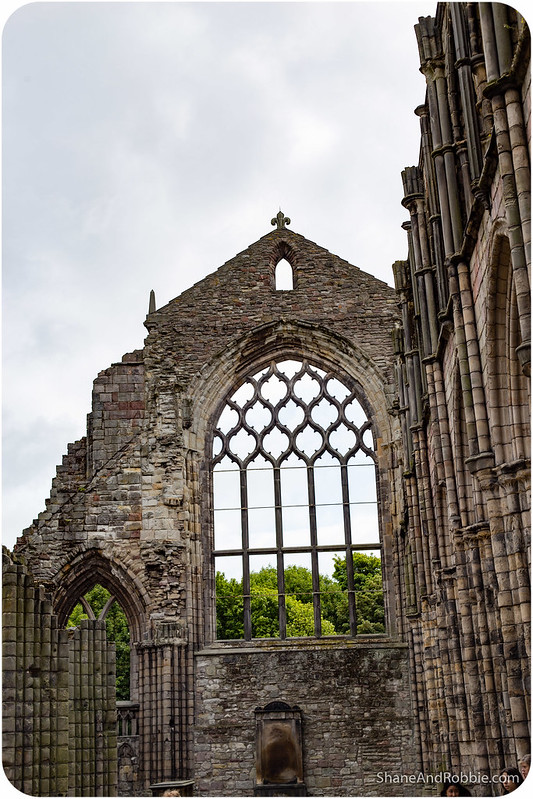 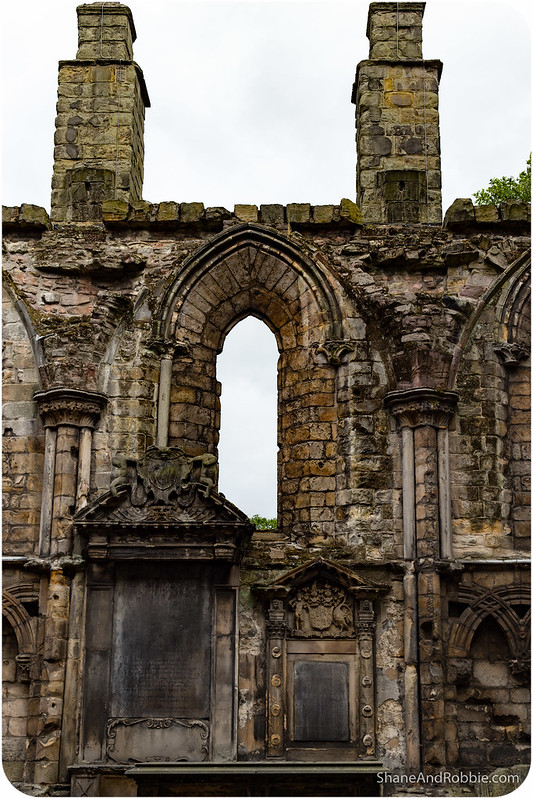 During the 15th century the abbey guesthouse was developed into a royal residence and, after the Scottish Reformation, the Palace of Holyrood was expanded further. When the Scottish and English crowns were united in 1703, however, the palace was no longer occupied full-time and the abbey church was left to go to ruin. 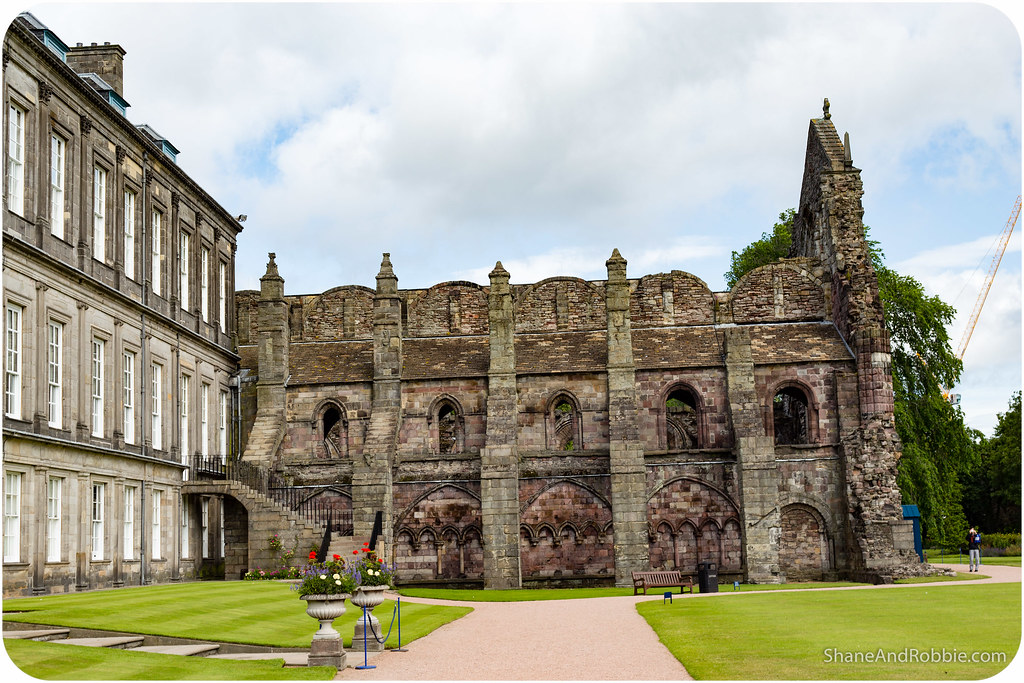 We took a stroll through the 10 acre gardens surrounding Holyrood Palace and then continued on into Holyrood Park. Once the hunting grounds of the royal family, Holyrood Park is now a public green space that today was bustling with joggers, people walking their dogs, and families out for the day. 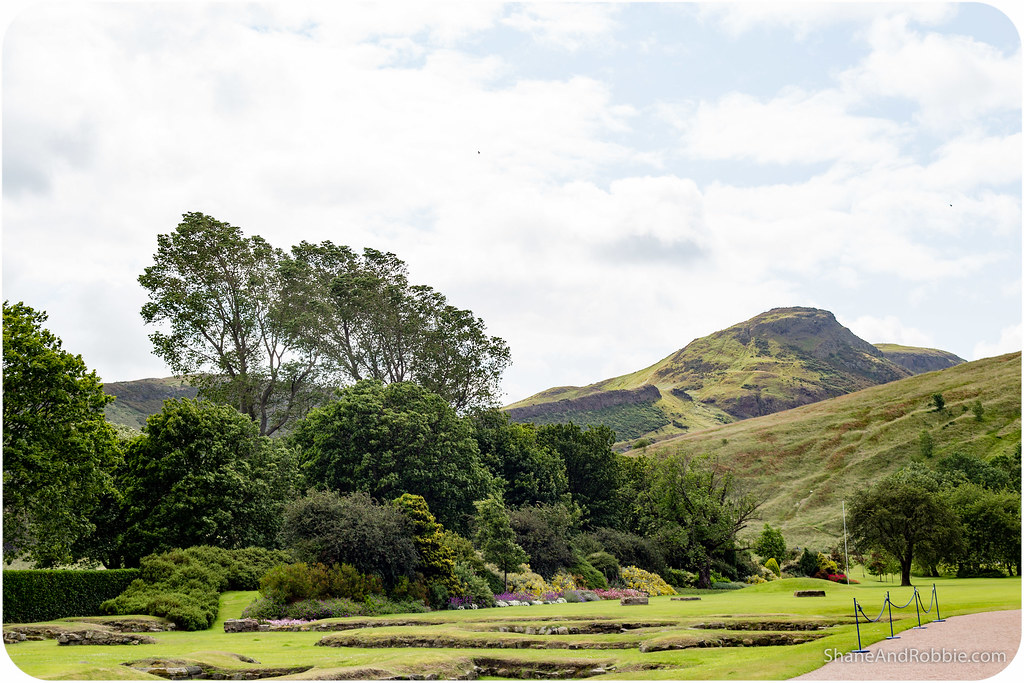 Central to Holyrood Park is Arthur’s Seat*. This 250m high hill rises up to the east of Edinburgh’s city centre and is described as “an easy climb for keen hillwalkers”. It’s been a while since we did any hiking and the afternoon was sunny, so we set off for our hill walk.

*We found out later that the hill’s name comes from its association with Arthurian legends; Arthur’s Seat is supposedly one of the possible locations for Camelot 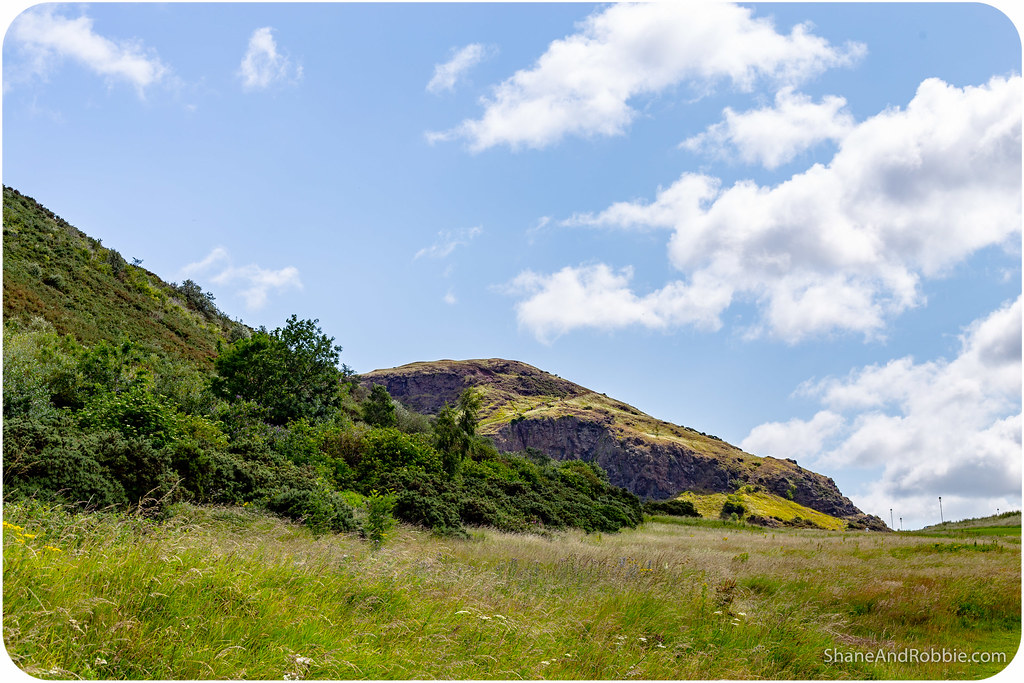 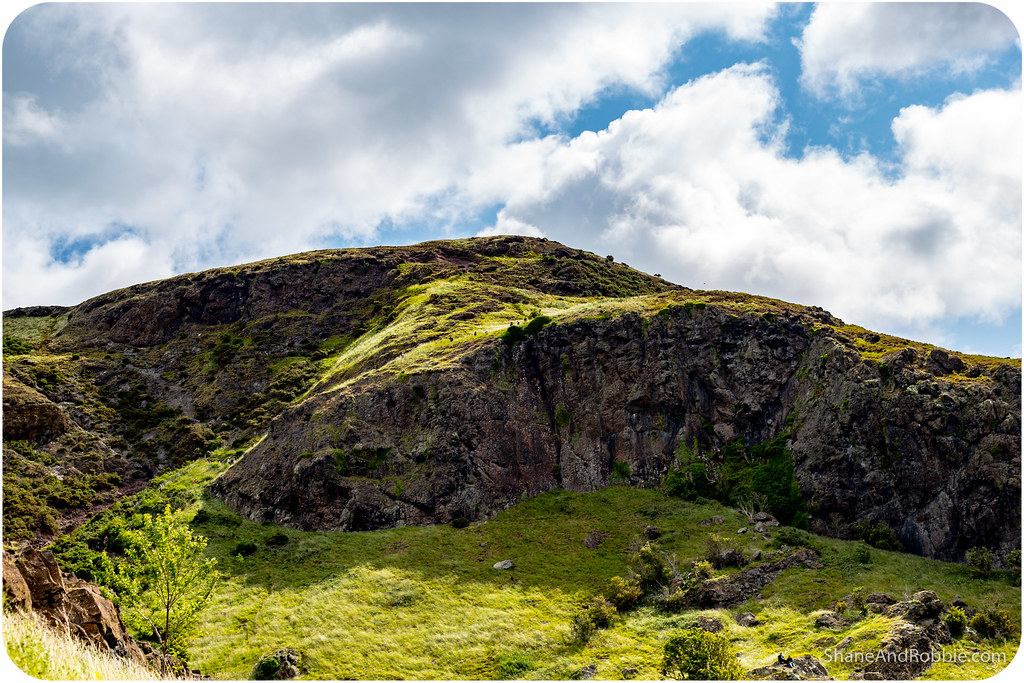 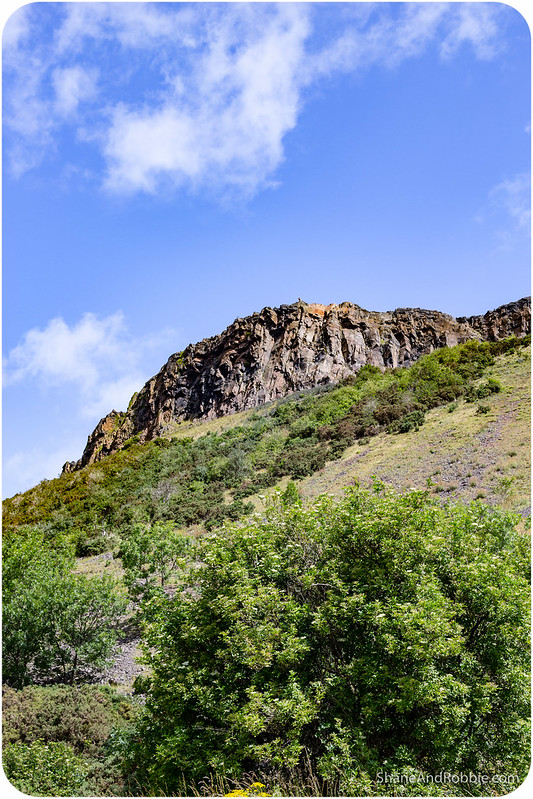 The views along the way and from the top were great and a suitable reward for our efforts. We could see all the way to the castle and across to the port arfea of Leigh, where a cruise ship was just pulling out of the dock. 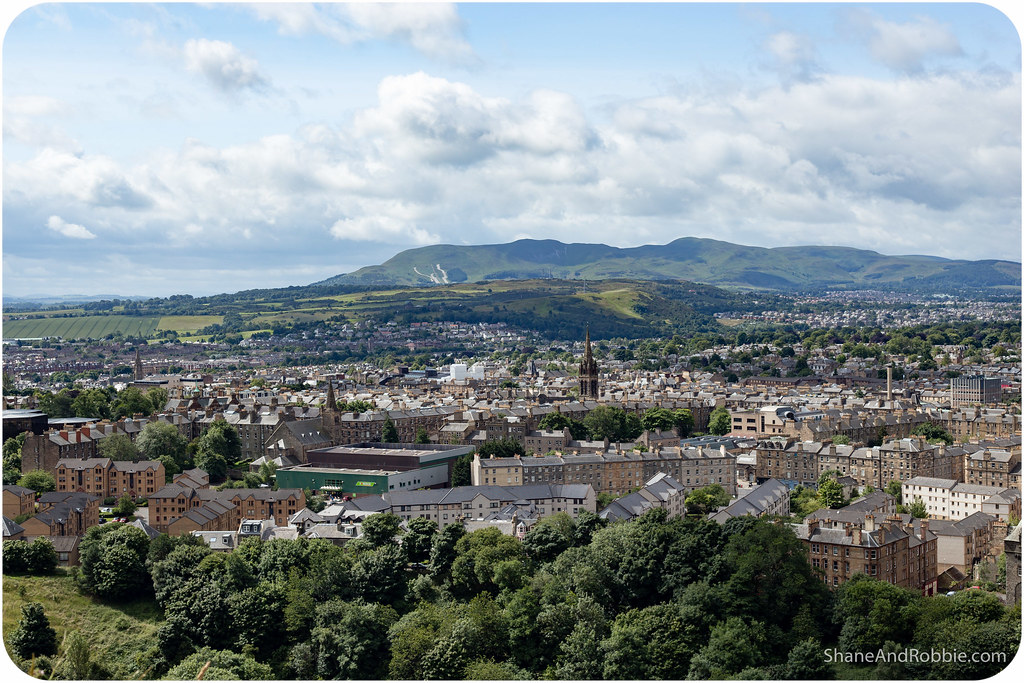 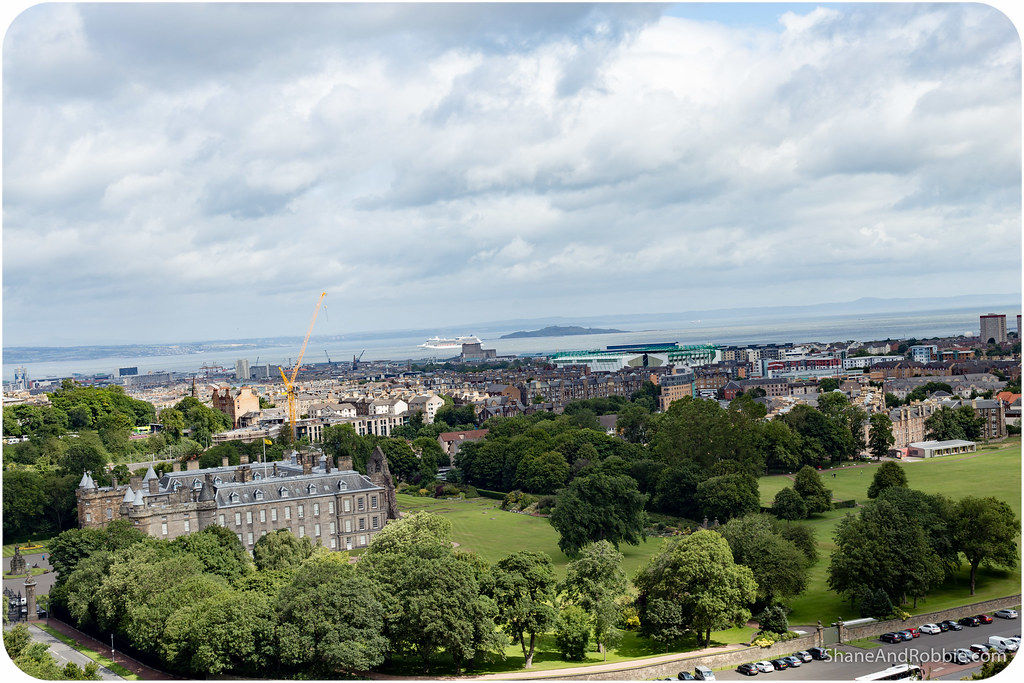 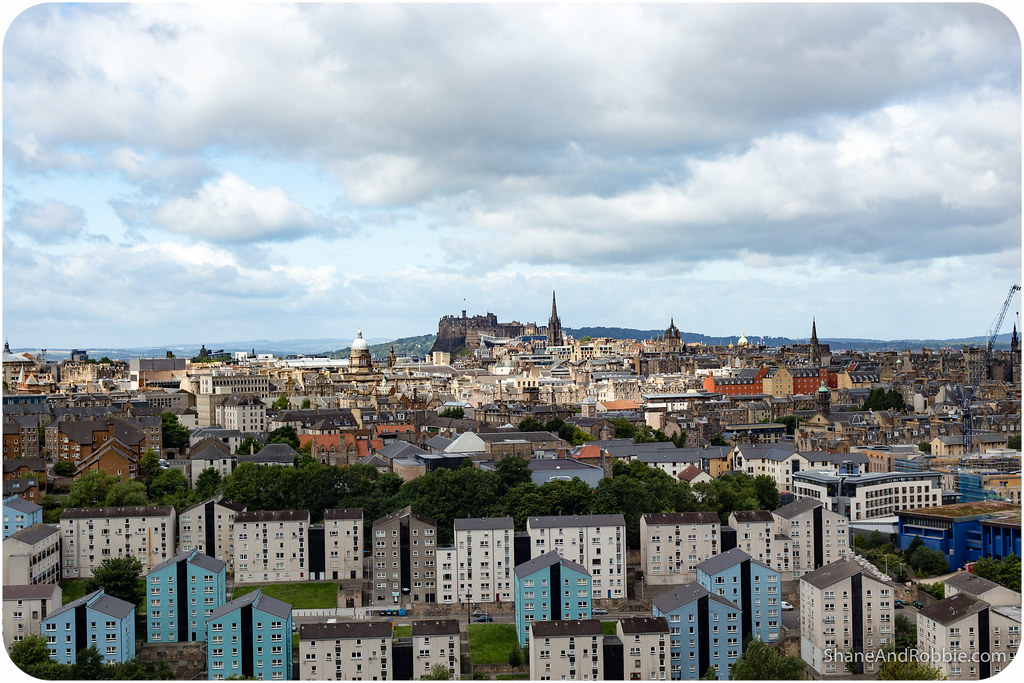 Walking down Arthur’s Seat and back to our hotel we realised that today was actually our last day in Scotland! Tomorrow we cross the border and re-enter England, and whilst we’re keen to see more of England, we’re going to miss the beauty and grandeur of Scotland! We’ve ended up enjoying Scotland way more than we thought we would and have definitely put this country on the “Must Return To” list. 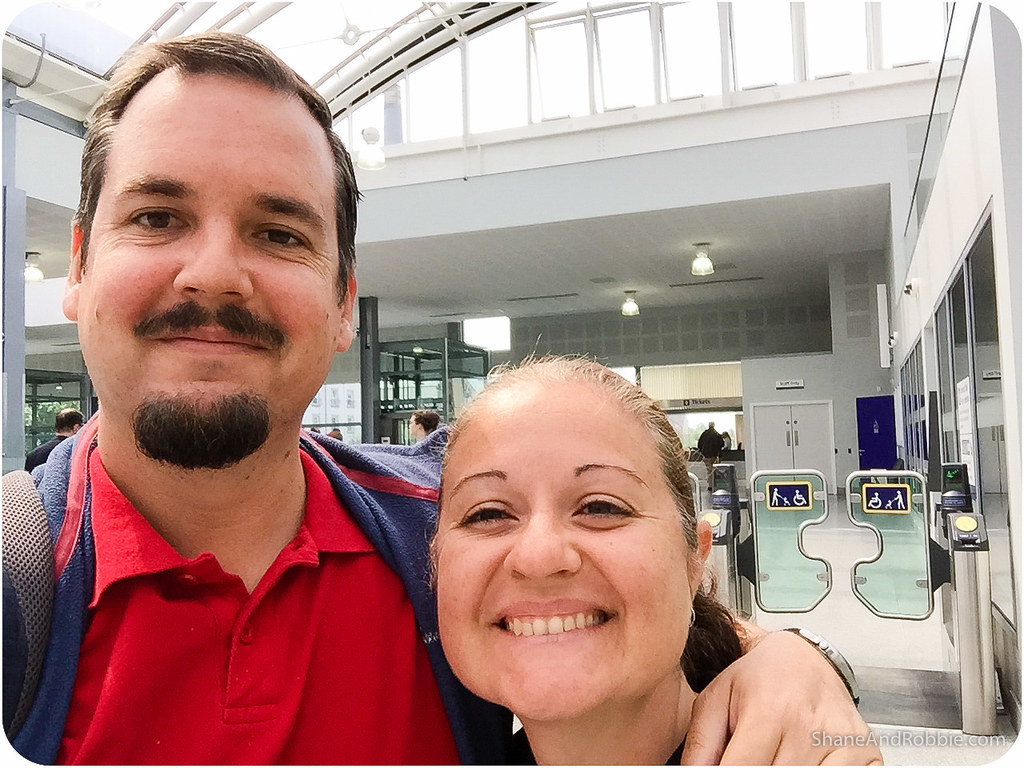