Hadrian’s Wall stretches across Northern England, from Wallsend in the East to Bowness-on-Solway in the West. This 2,000-year-old, 135km-long stone barricade winds its way through some of the loveliest countryside in England and attracts hikers and history buffs from all over the world. Today we joined the legions of explorers who’ve come to this part of Britain to follow in the footsteps of the soldiers who once patrolled the Roman Empire’s frontier. 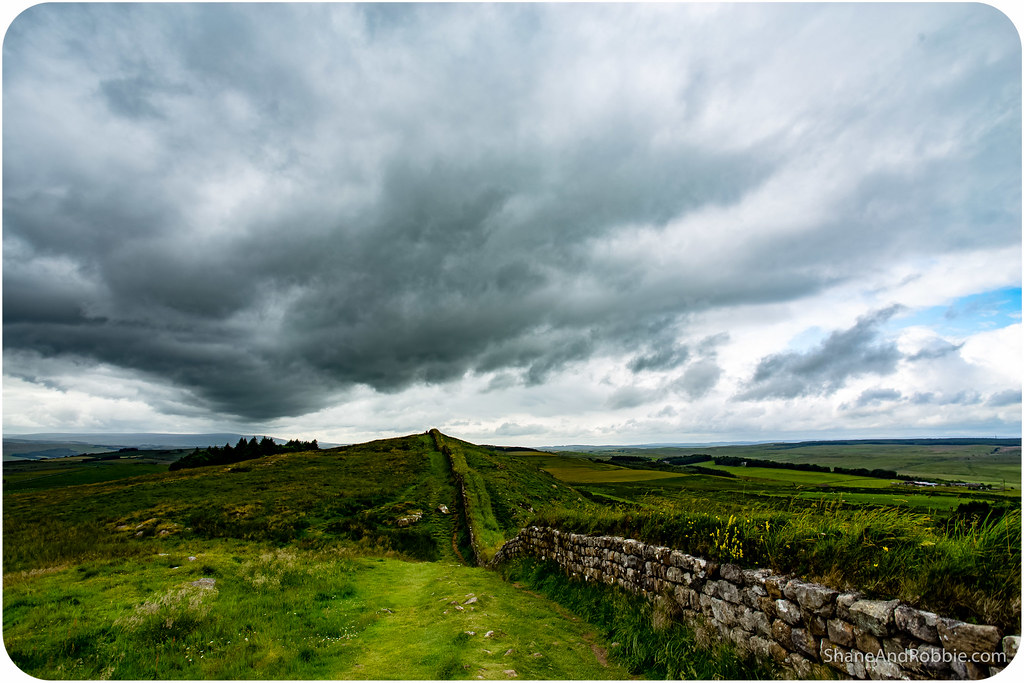 Romans first landed in Britain in 55BC, after conquests in Gaul (i.e. what is today Northern France). They gained a foothold on the coast of Kent but, undermined by storm damage to their ships, were unable to advance further at that time. The weather, and fierce battles with the locals, kept the invading Romans at bay until 43BC. At that point Britain became part of the great Roman Empire… at least most of it did. The very North of the island never came under Roman rule, thanks to the ferocious Pictish and Celtic tribesmen who lived up there and the difficult terrain. 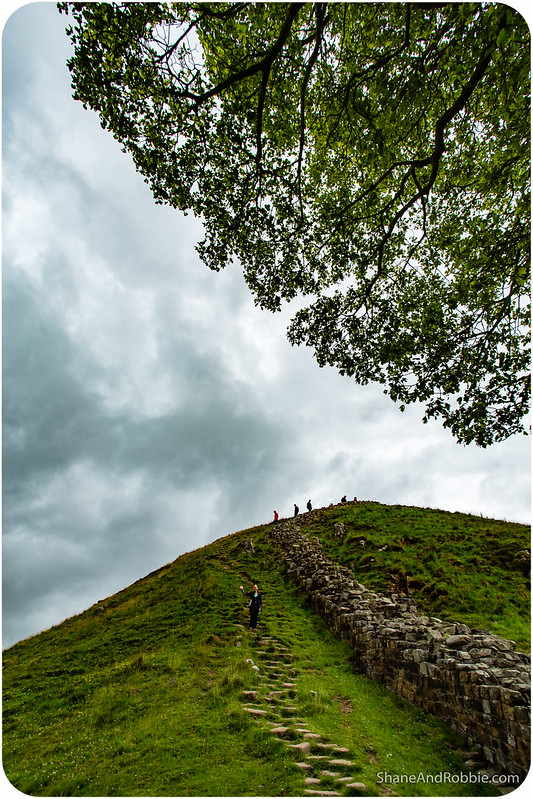 In 122AD, a few years after taking control of the Roman Empire, which reached its greatest expanse by the time of his rule, Caesar Hadrianus made a journey to the edge of the known world. Having seen for himself the windswept Northern limit of his empire, Hadrian left orders that the border was to be protected by a wall 5m high and 3m thick, stretching from sea to sea. And so they built Hadrian’s Wall. 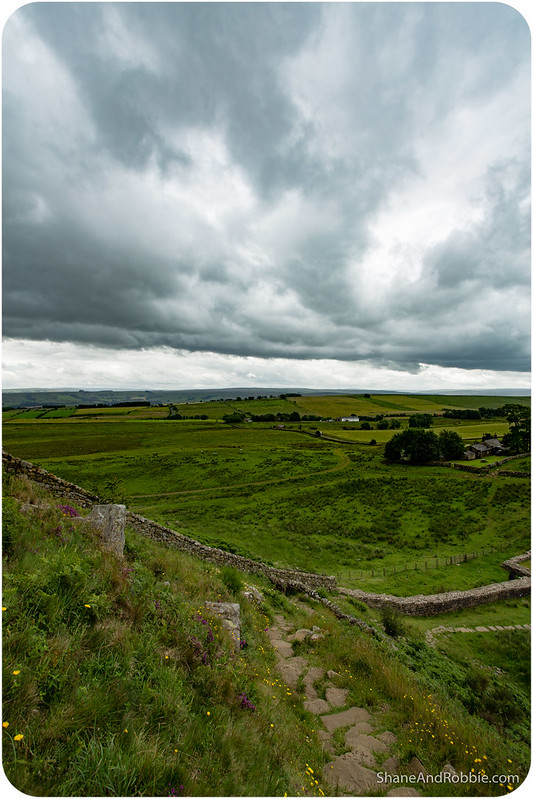 The wall was made of stone, quarried from the local hills, and followed the line of the Whinsill Escarpment which runs across much of Northern England. For defensive purposes every Roman mile (about 1.5km) they built a mile-castle, and a larger fort was constructed every 5 Roman miles (about 7.5km). The mile-castles housed static garrisons, whereas the forts had fighting garrisons of infantry and cavalry. The remnants of these mile-castles and forts are still dotted along the wall, as we saw during our trek today. 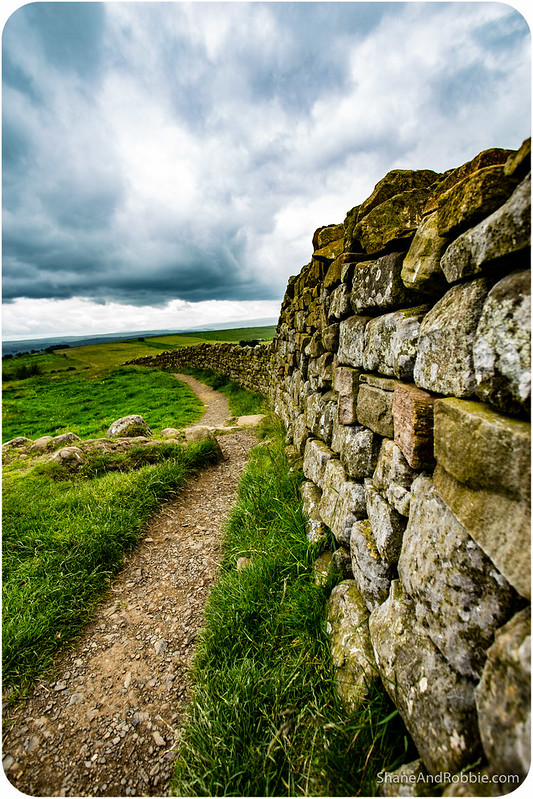 At one stage we came across a reconstruction designed to show what a piece of the wall would have looked like when it was entire. Seeing this we were struck by the similarities between the design of Hadrian’s Wall and the Great Wall of China, which we visited earlier this year. It’s obviously a design that works for 2 great civilisations to use it defensively like this. 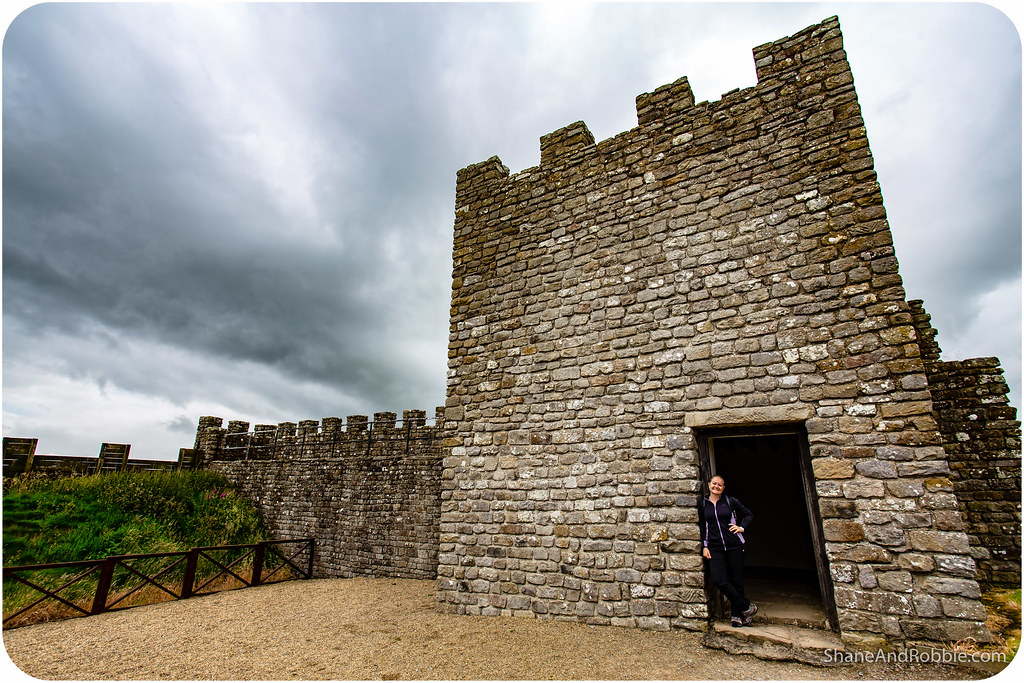 Though much of the wall has disappeared over the centuries (some of its stones were used to build local houses and to pave nearby roads), enough remains that we got a sense of the wall’s imposing presence as we walked part of the Hadrian’s Wall Path*.

*This trail runs along beside the remnants of Hadrian’s Wall for all 135km and is very popular with hikers keen to enjoy the beauty of this Northern part of England. 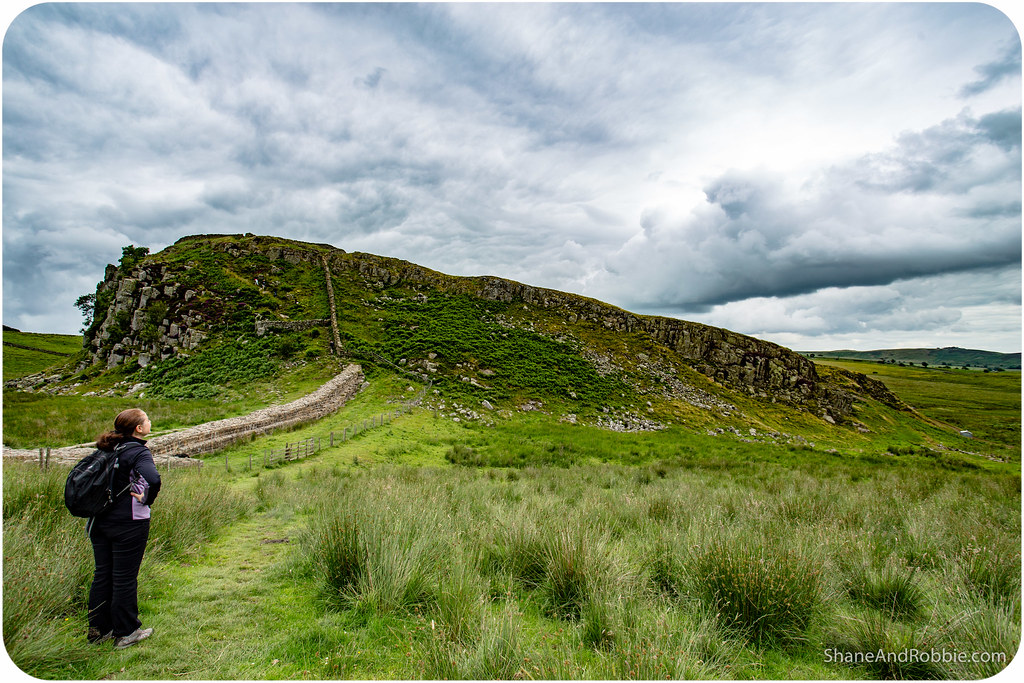 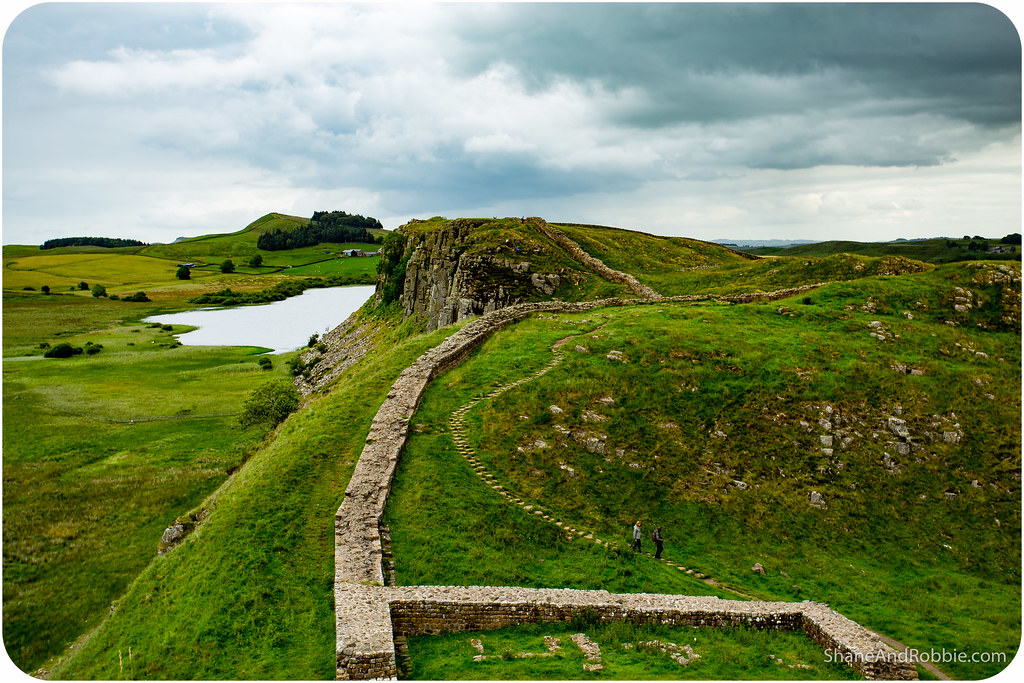 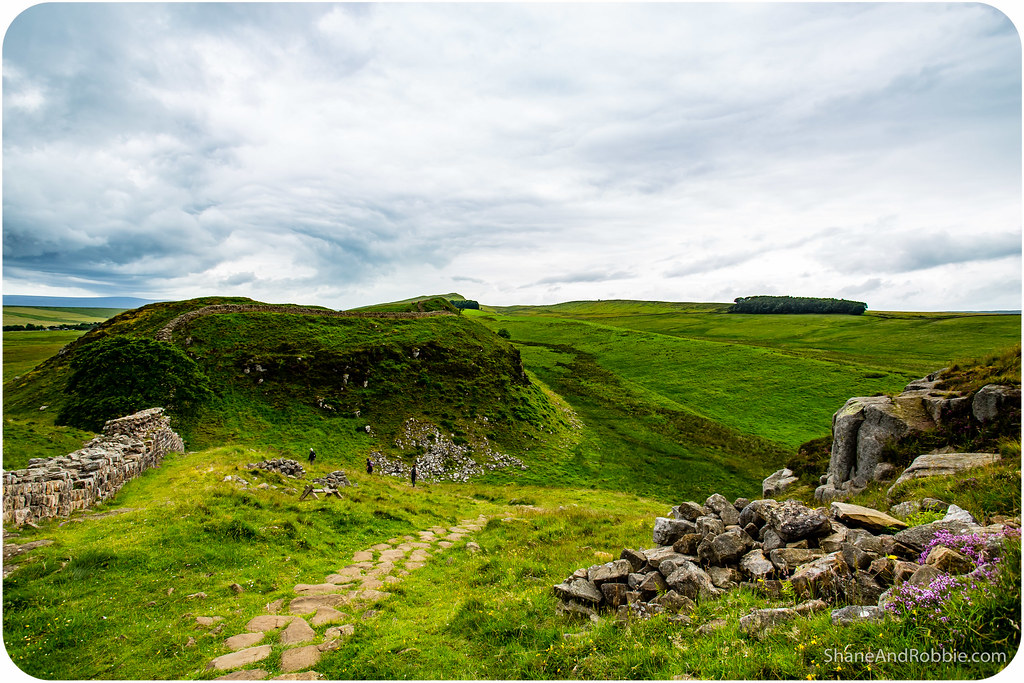 We walked about 10km of the Hadrian’s Wall Path, between the ruins of 2 ancient Roman forts: Vindolanda and Vercovicium. This part of the wall runs up and down a few hillsides, following the topography of the escarpment and making even that short hike a bit more strenuous that we had banked on! 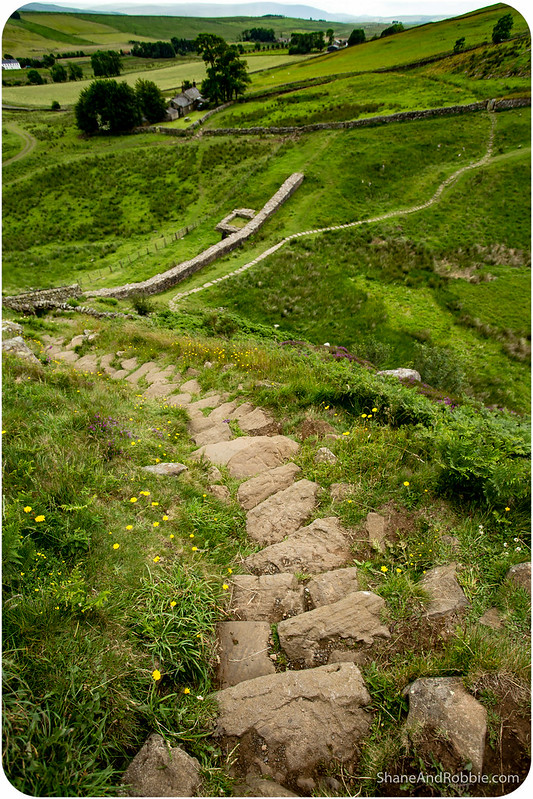 We started our trek at Vindolanda, which is easily accessible by public transport from Newcastle and makes for an interesting visit in its own right. The ruins of Vindolanda fort and its surrounding vicus* are open to the public and tell the story of live in ancient Roman, at this far Northern outpost. The ruins of a temple, of the public bath house, the market place, and the public latrine were all visible, as were the remains of a number of homes. 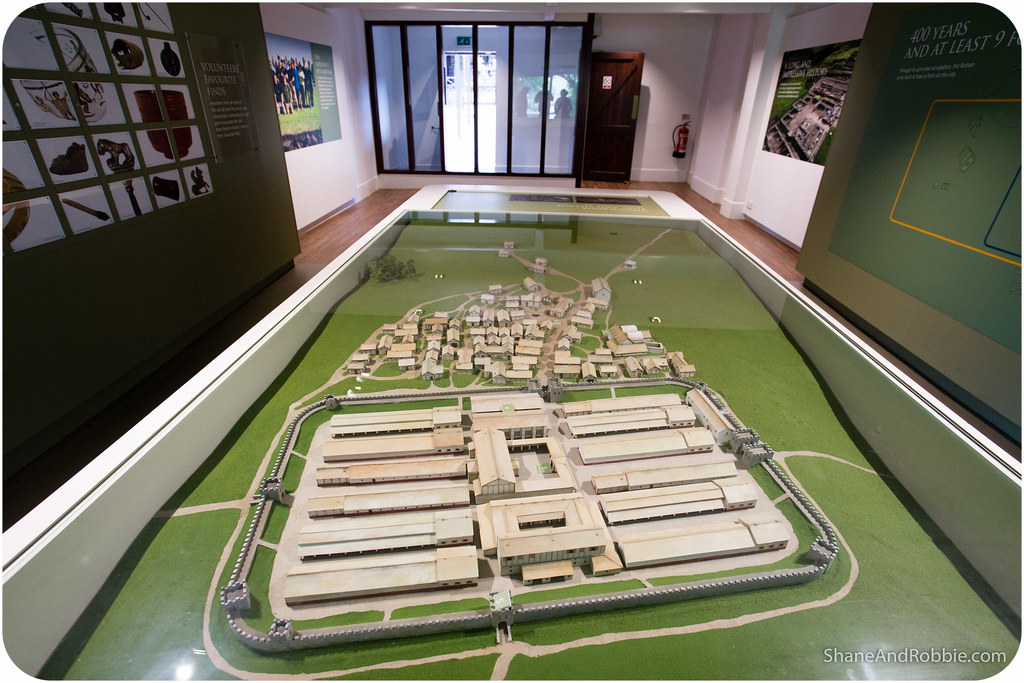 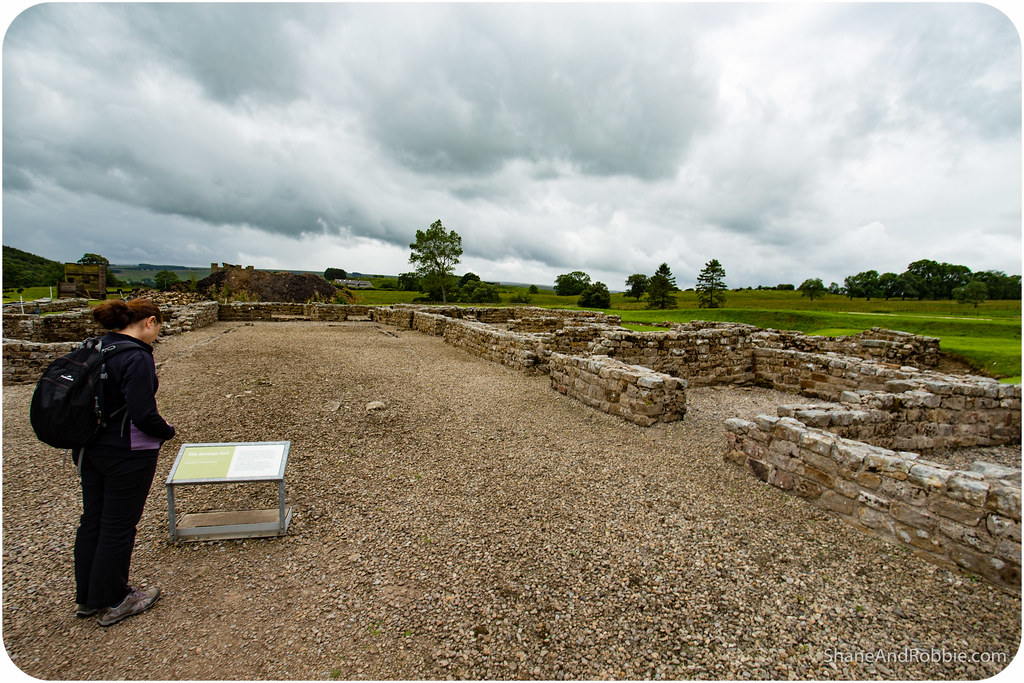 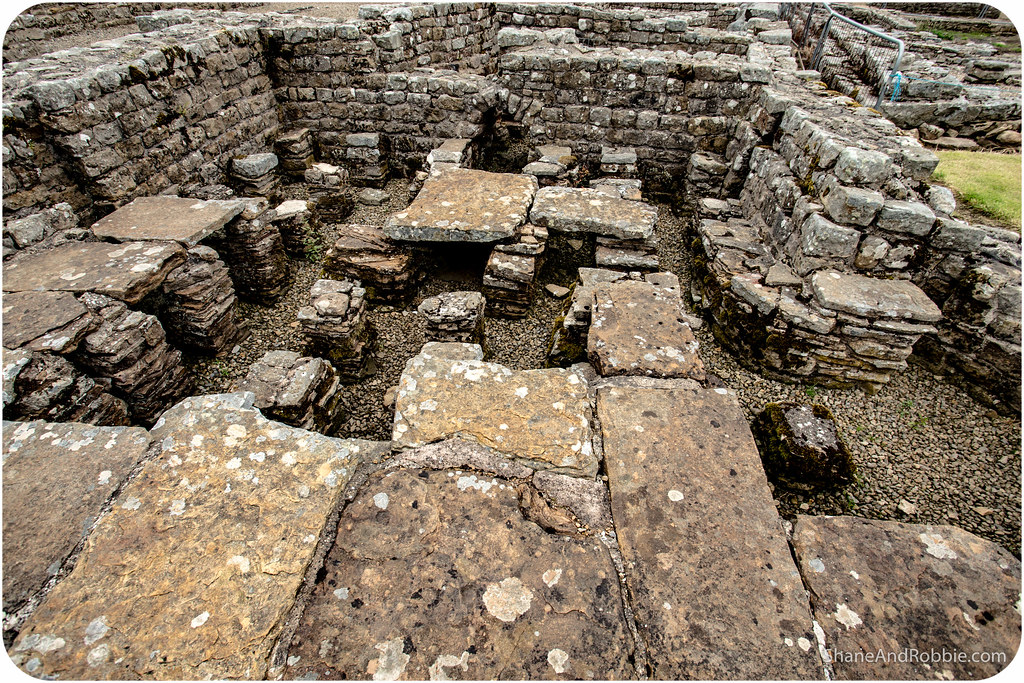 Even better than the ruins themselves, however, was the Vindolanda museum, which had displays showcasing all the artefacts uncovered on the site. Due to the anoxic nature of the soil around Vindolanda the artefacts were really well preserved – including coins, weapons, fabric, and leather pieces (shoes, horse harnesses, etc). 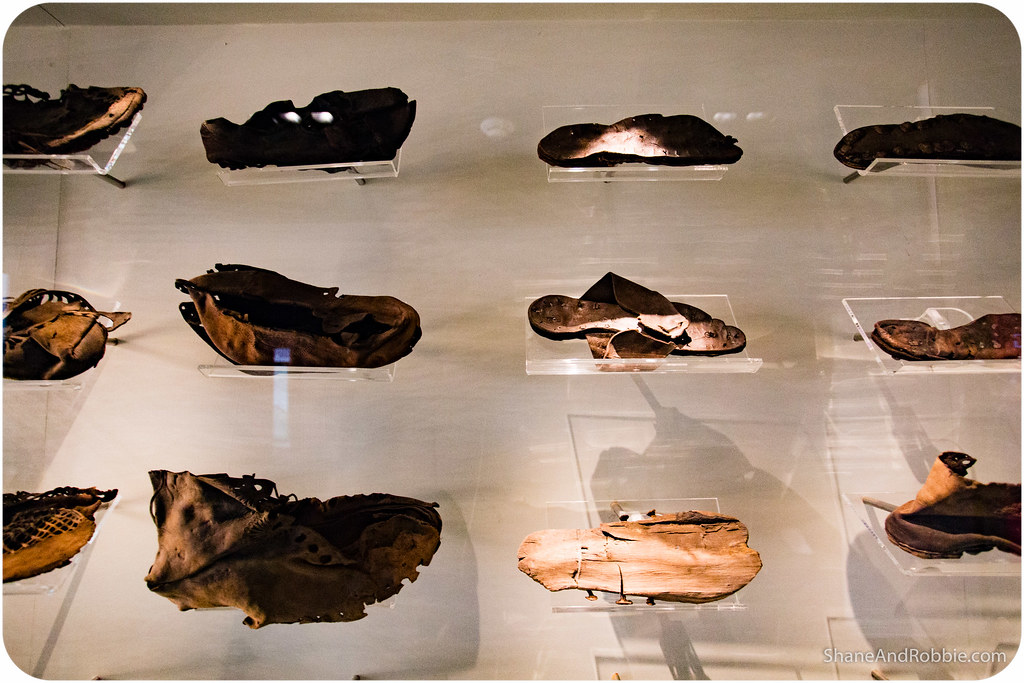 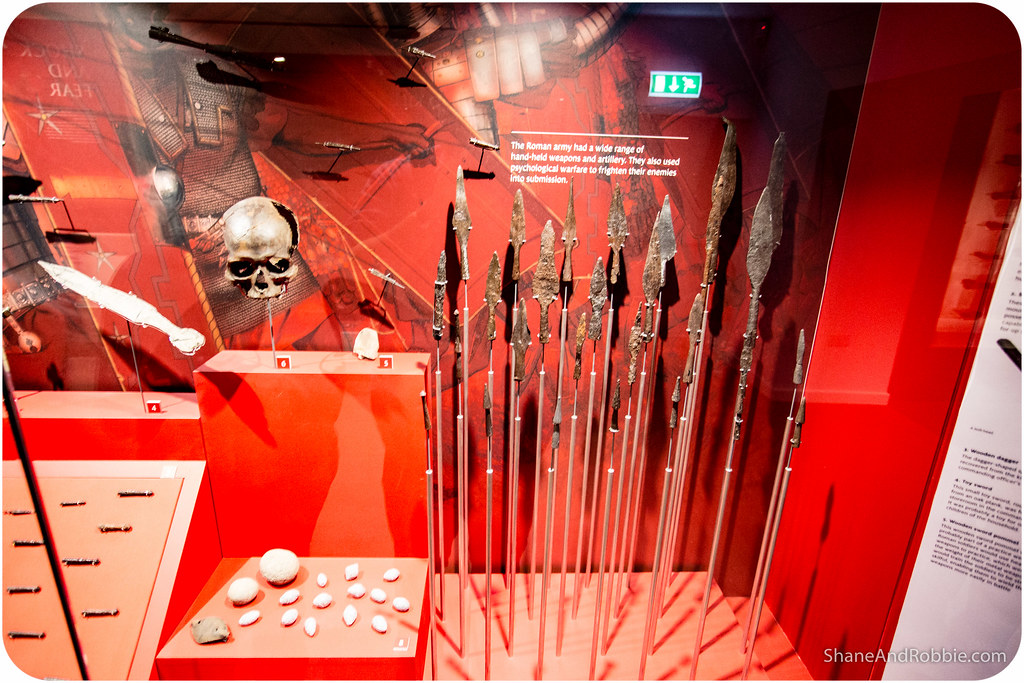 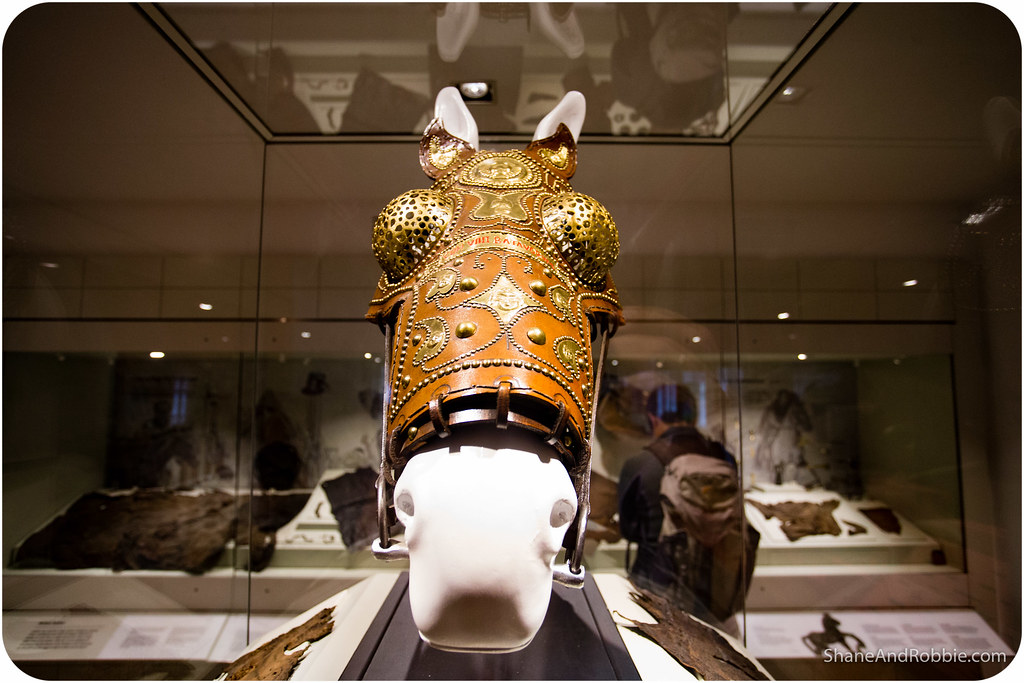 From Vindolanda we trekked across fields and along narrow country lanes, towards the ruins of Vercovicium (now known as Housesteads) Roman Fort. Along the way we stopped in at a small village pub for a wholesome and hearty lunch – perfect hiking food! 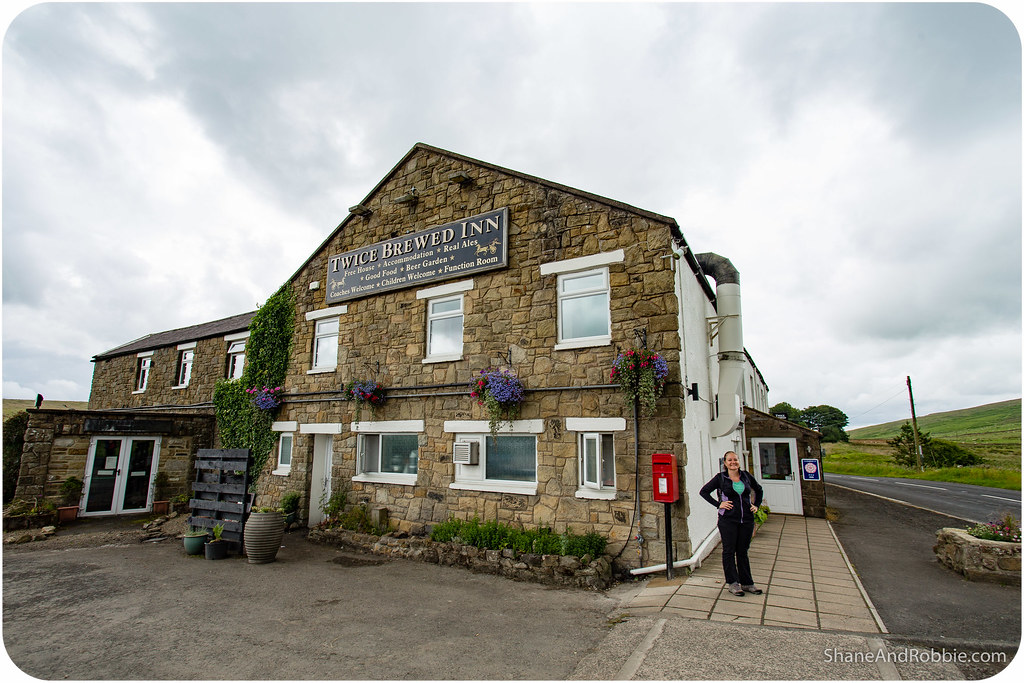 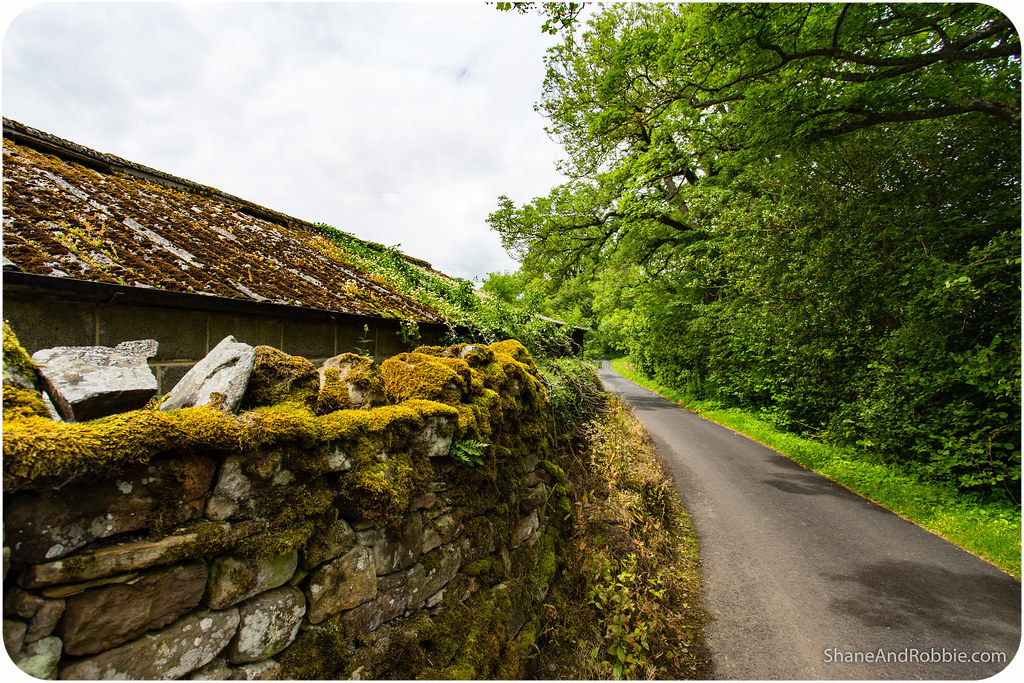 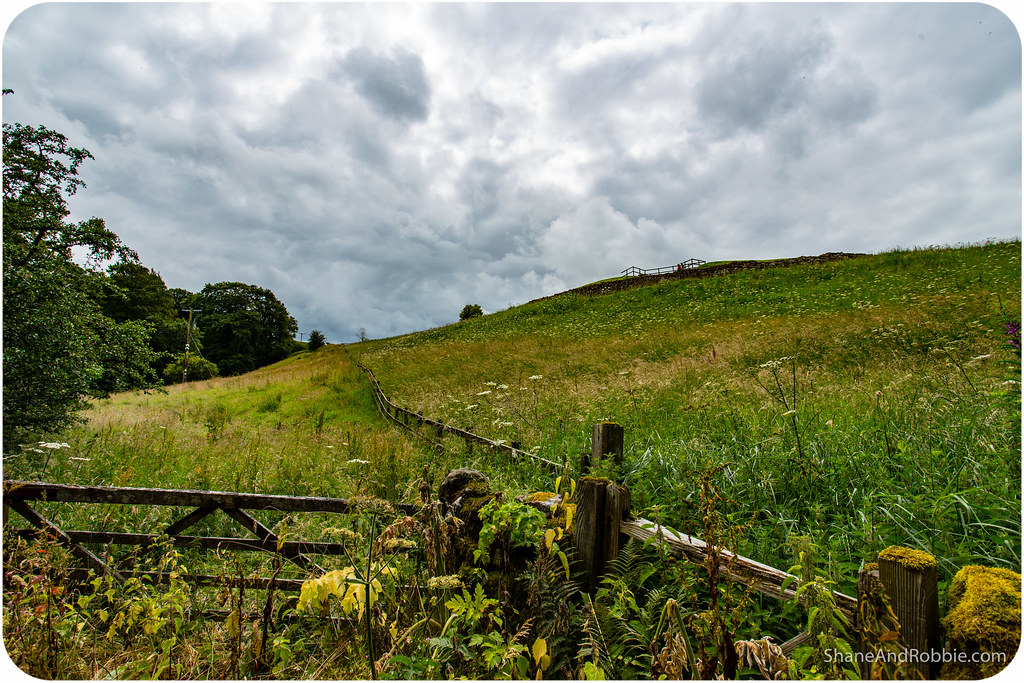 The views along the way were great, especially to the North into what was once wild, untamed territory. There were other people walking following the trail, but it was by no means busy. In fact, it was wonderfully peaceful and pleasant walking along the wall (despite the constant wind). It must be amazing to do the entire multi-day hike, from coast to coast, and wake up beside Hadrian’s Wall. 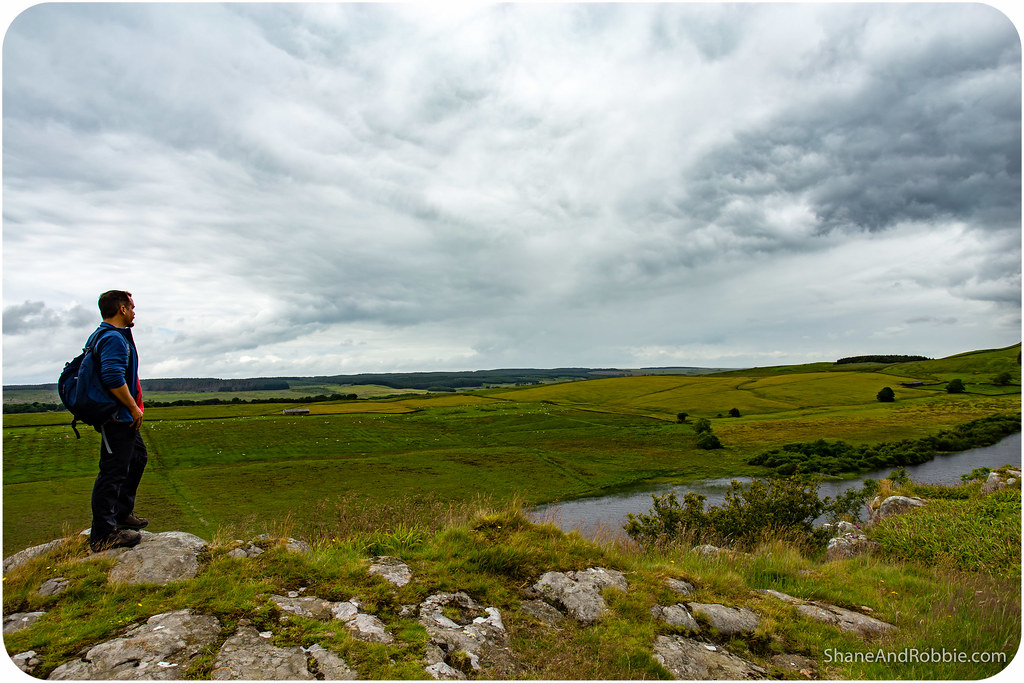 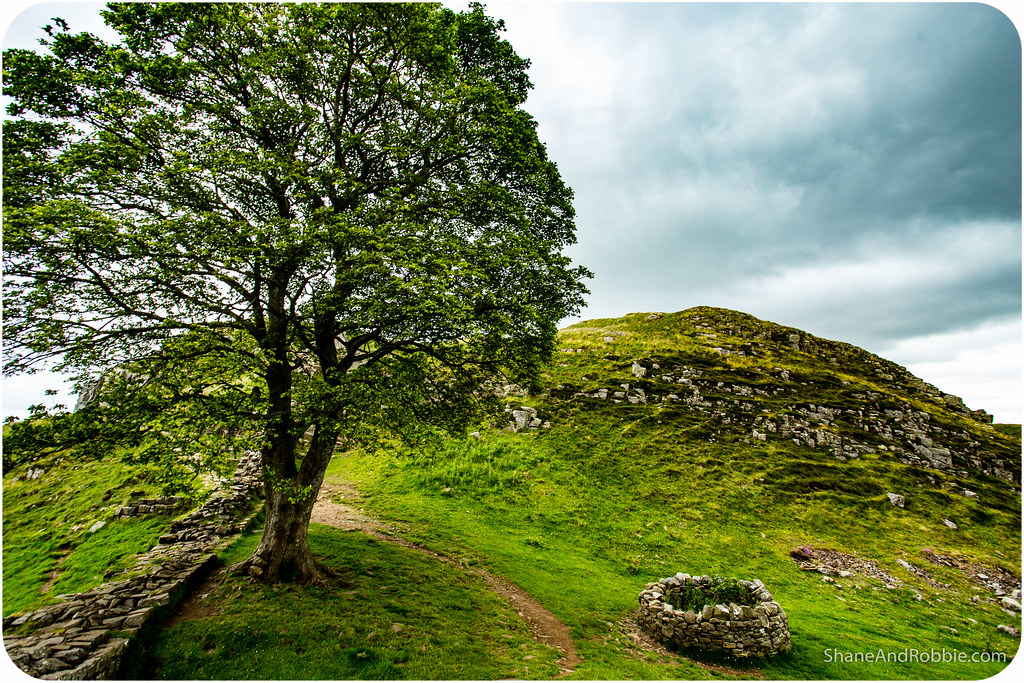 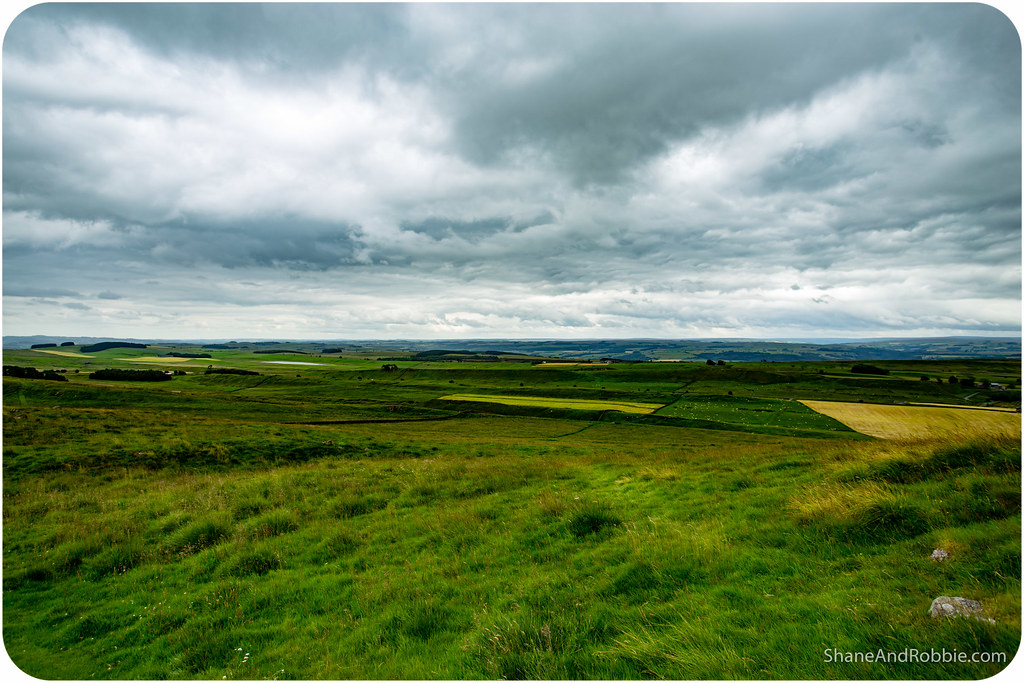 After briefly visiting the ruins of Vercovicium we hopped back on the aptly named “AD122” bus that does the run between all the Roman sites of interest and headed to the village of Hexham, where a local train took us back to Newcastle for a quiet night’s entertainment in our very comfortable hotel room (ahhhh – the luxury of fluffy bath towels and bath robes). We had a great day exploring some of the ruins of Roman Britain, and even though the remains of Hadrian’s Wall are much diminished from their original grandeur, it’s absolutely still worth seeing – for the scenery if nothing else! 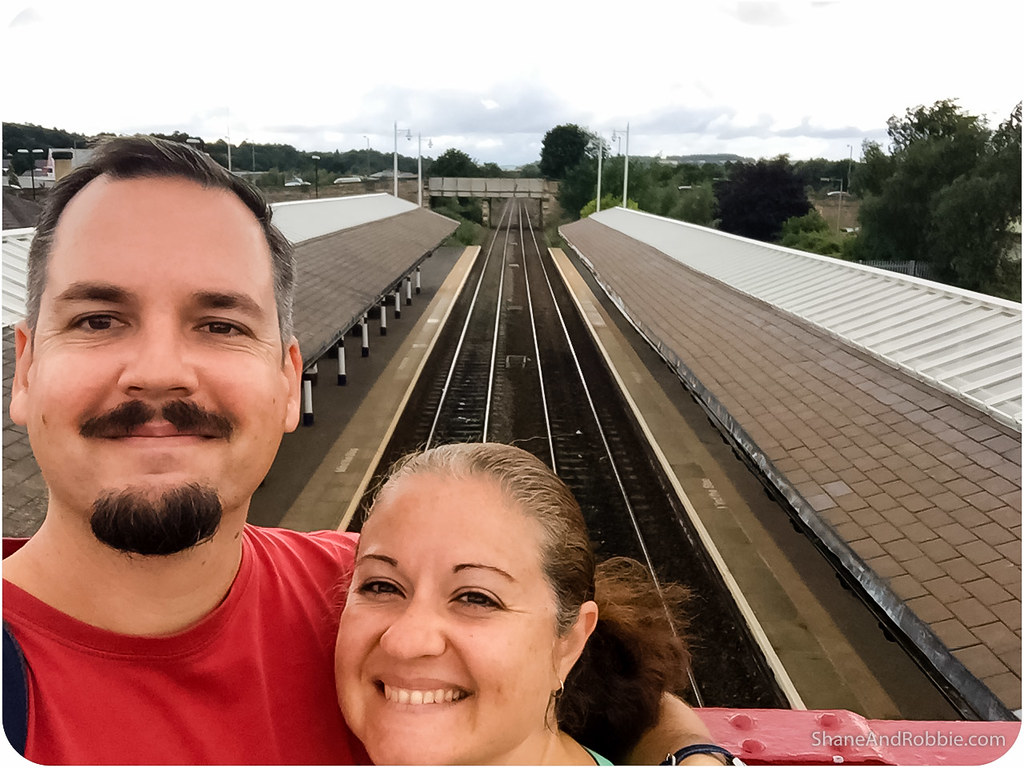