OUR DAY TRIP TO DURHAM

Just 15 minutes away by train from Newcastle-Upon-Tyne is the town of Durham. This small, unassuming university town was once an important pilgrimage site and a powerful city, home to the wealthy and influential Prince-Bishops of Durham. We went to see its 900 year old Norman cathedral and 11th century castle, both designated UNESCO World Heritage Sites, and we were not disappointed! Medieval Durham is fascinating and was well worth a visit. 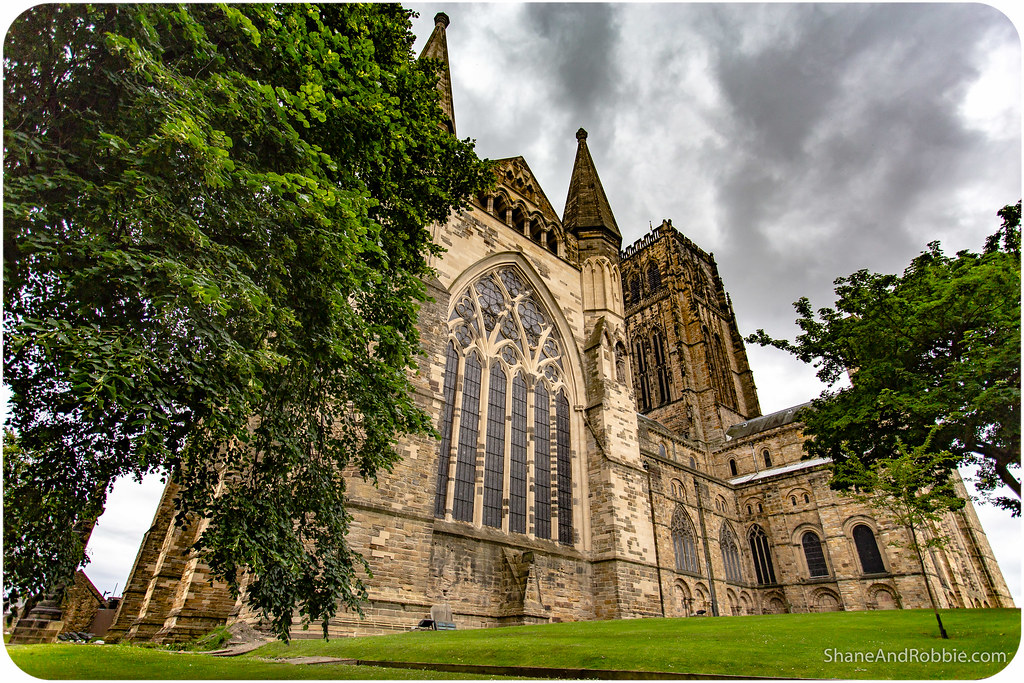 The Industrial Revolution essentially by-passed Durham, leaving the its Medieval town centre unchanged and giving the town a very different feel to Newcastle and other, more industrialised townships in Northern England. Strolling through the cobbled streets of Durham today we got to really appreciate its unique vibe and really enjoyed exploring the old town’s market square, tiny alleyways, and beautiful bridges. 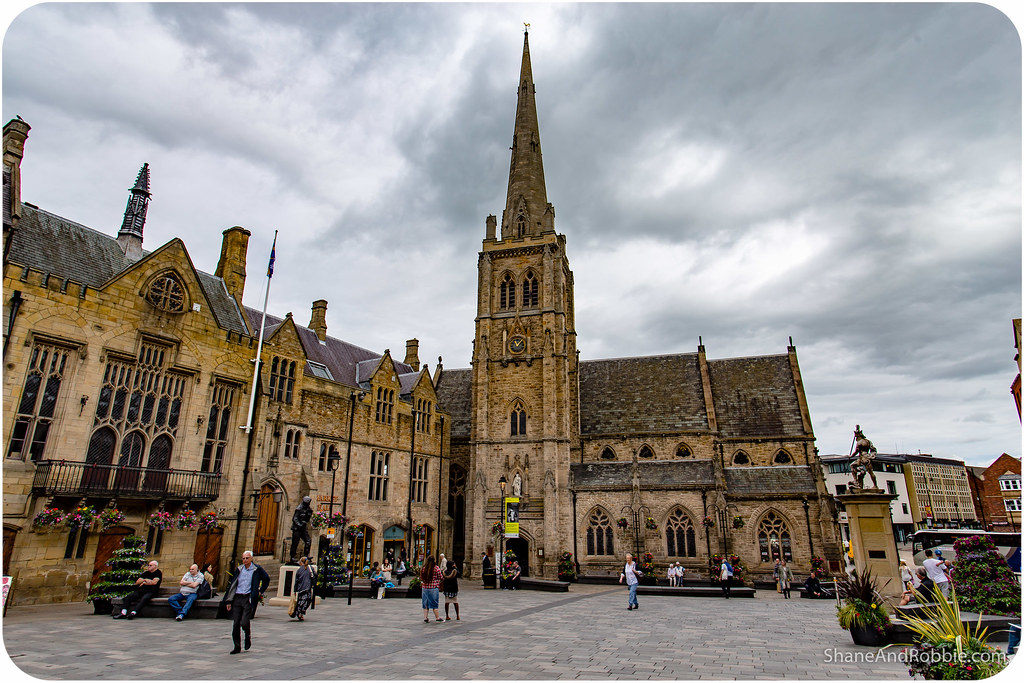 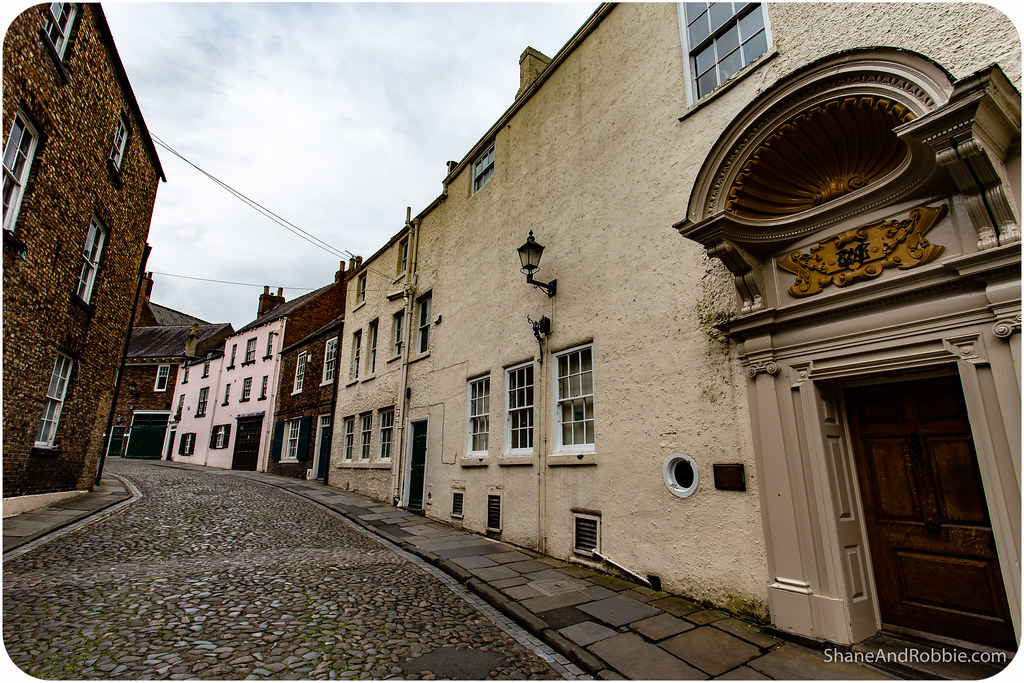 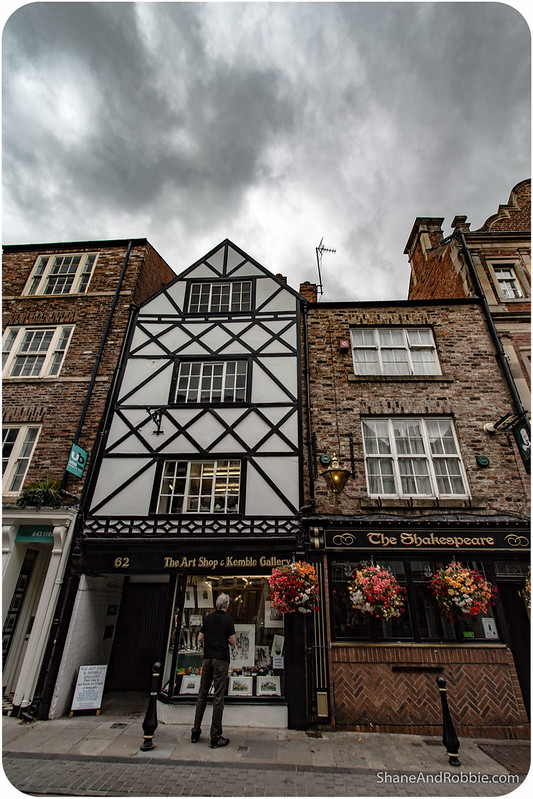 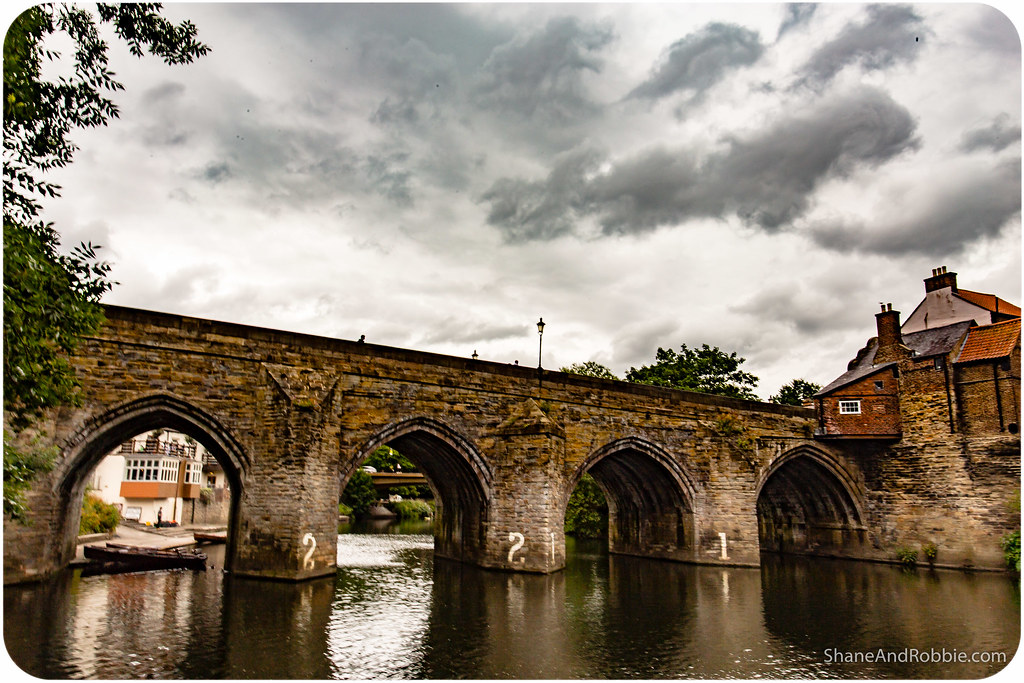 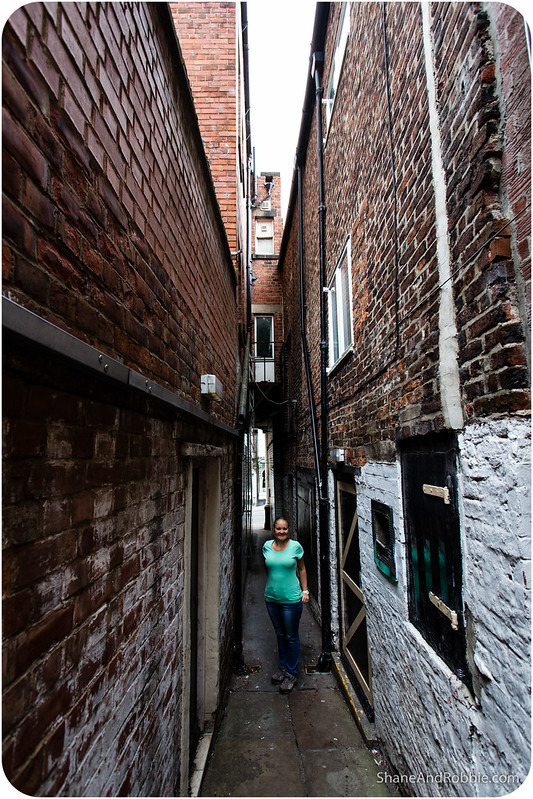 Durham is built on an elevated rocky peninsula, surrounded on 3 sides by the River Wear. Archeological evidence suggests there has been a settlement at this highly defensible site since 2000BC, though the foundations of the present city can only be traced back to 995 when a group of monks from Lindisfarne* established a chapel there. The holy men from Lindisfarne chose the site to bury the body of St Cuthbert, which is why Durham became a pilgrimage destination during the Middle Ages. For centuries the shrine of St Cuthbert was one of England’s most important religious sites.

*Lindisfarne, or Holy Island, was one of the places we visited recently, on a day trip to see the magnificent fortified castles of Northumberland. 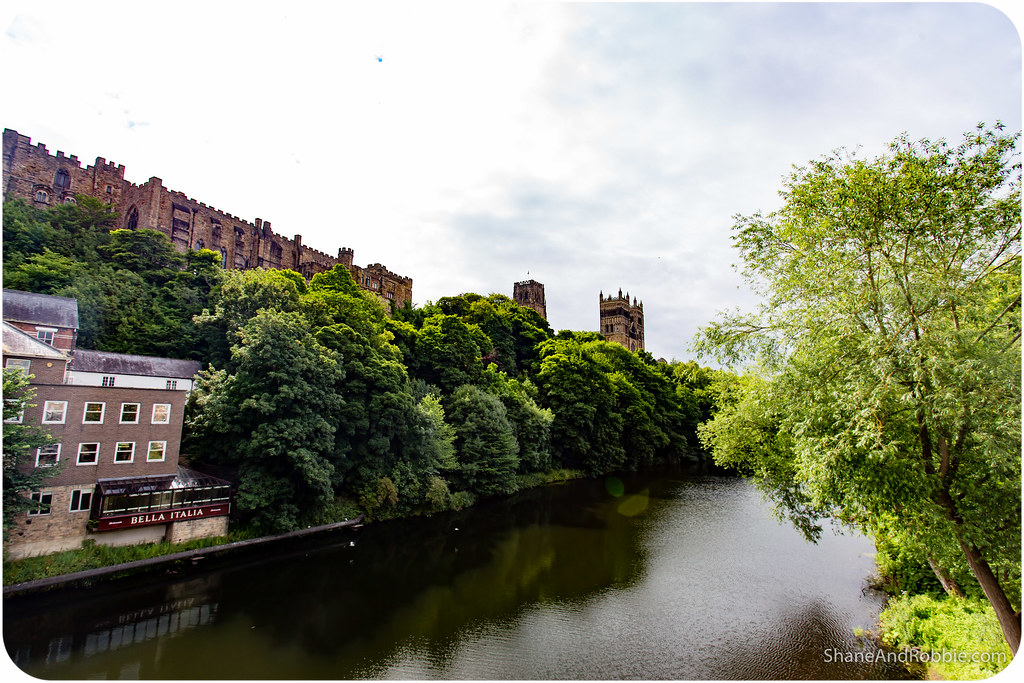 The monumental* Durham Cathedral grew around St Cuthbert’s shrine, with the current Romanesque structure completed in 1133. The church has been in continuous use since its construction 900 years ago; it remains a place of worship (which is why we couldn’t take any photos inside the building), and is of great historical value. Durham Cathedral’s architectural value lies in the fact that it is the oldest surviving building with a stone vaulted ceiling of such a large scale. This may not seem remarkable today, but developing the know-how to roof large buildings with stone rather than wood shaped the course of European architecture from then on.

*It really is a HUGE building – the central nave is 150m long and the highest vault 65m high. That’s impressive considering the building’s age! 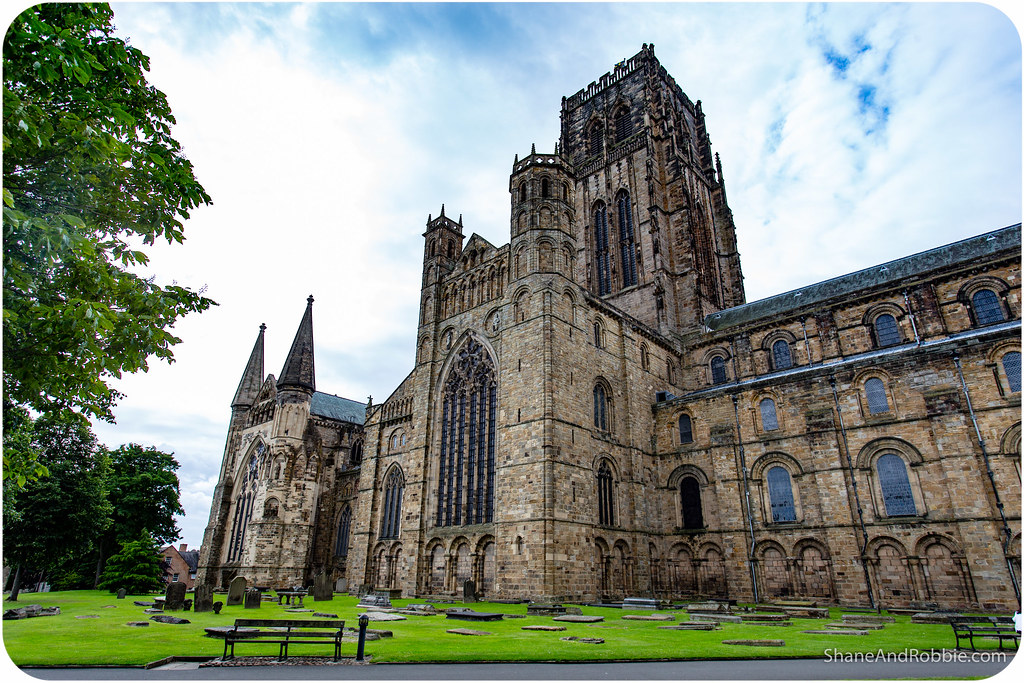 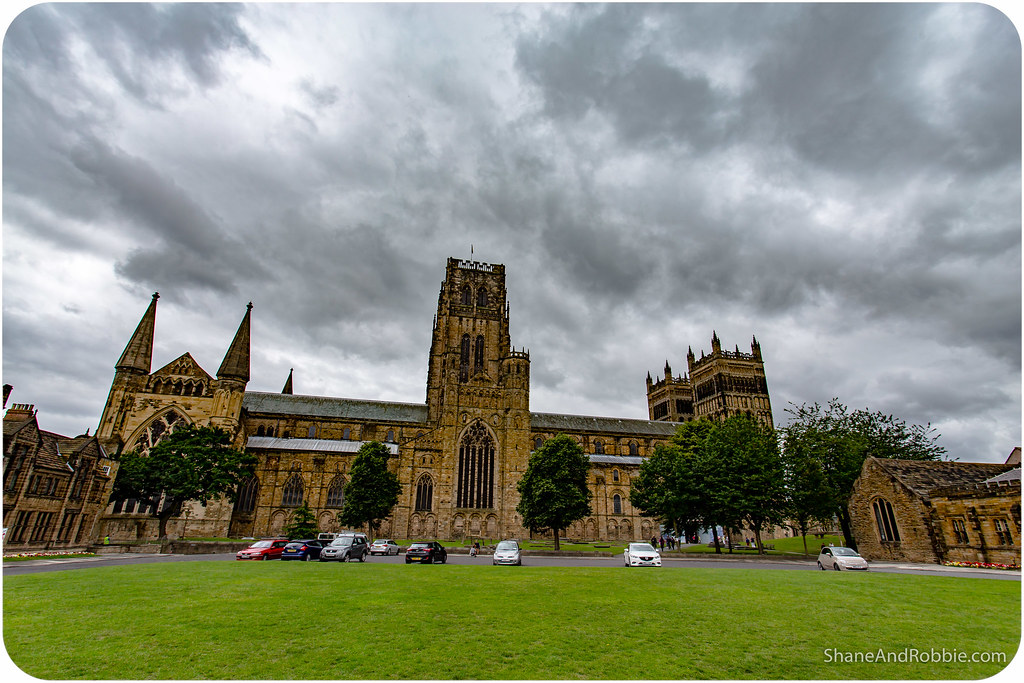 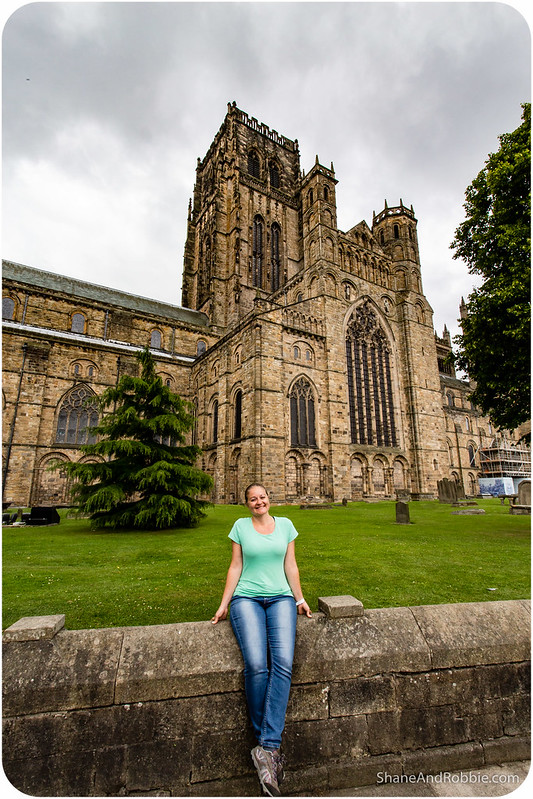 In keeping with the grandiosity of their cathedral, the Prince-Bishops of Durham enjoyed significant wealth and power during the Middle Ages. Their status diminished somewhat however when King Henry VIII curtailed their powers and, in 1538, ordered the destruction of the shrine of St Cuthbert (but not, fortunately, any of the building itself). 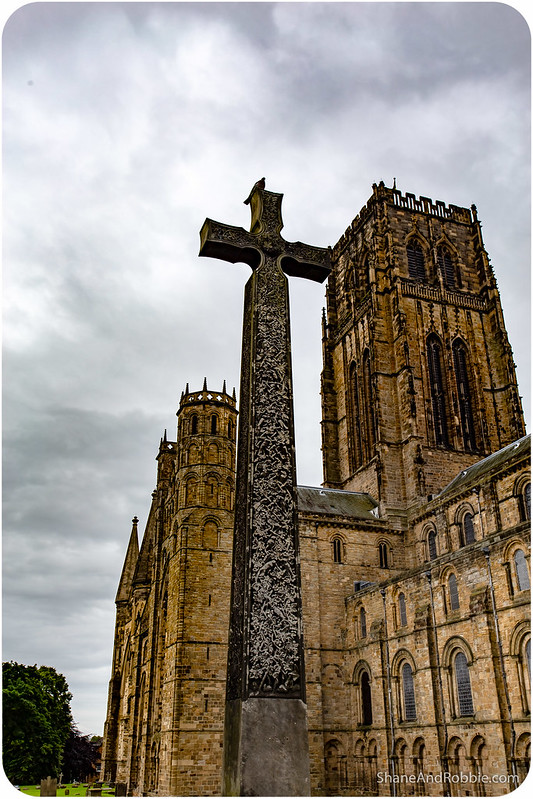 Durham’s geographical position has always made it important, not only as a religious centre, but also as a garrison town. Historically the city played an important role in the defence of the north; in fact, Durham Castle is the only Norman castle keep never to have suffered a breach. 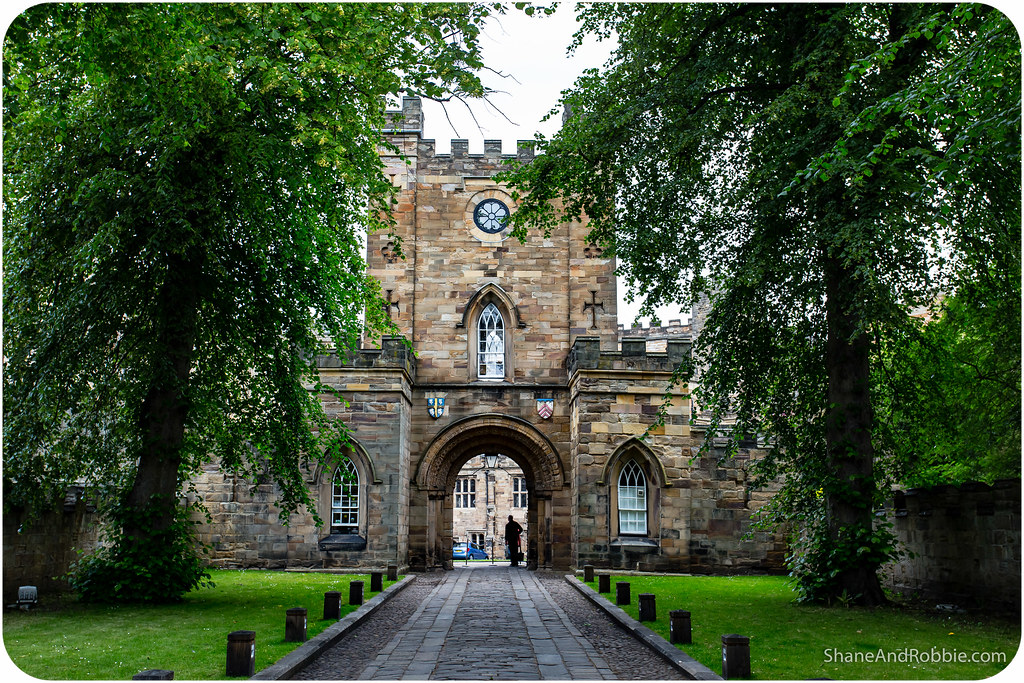 Durham Castle was built in 1076 and stands on top of the hill above the River Wear, opposite Durham Cathedral. The castle came under the control of the Prince-Bishops of Durham in the 12th century and remained their primary residence until 1832 when it became the home of Durham University. Due to its function as a university campus we couldn’t explore the castle at will today, though we’ve seen enough fortified Norman castles at this point in our trip around the UK that we sort of get the general idea of what they’re about. 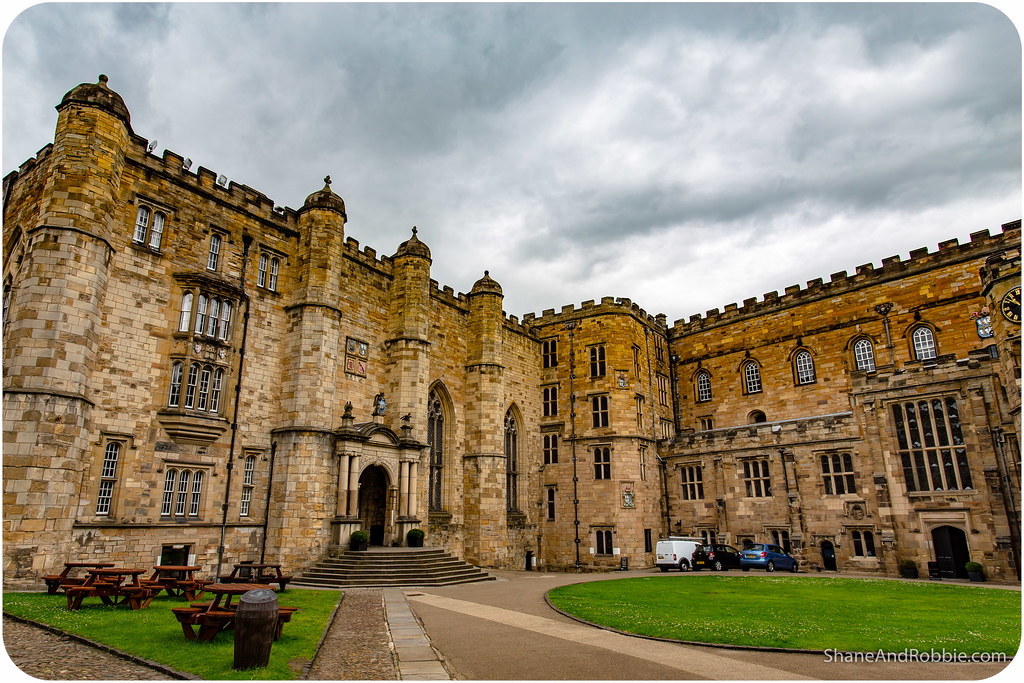 Having seen some of the old Medieval parts of Durham, explored the cathedral, and seen the castle, we decided to take a break and have lunch at one of the many cafés perched around the hilltop. The views were great, the food fantastic*, and the coffee even better. What more could you want?!

*Dessert, in particular, was so good that Shane wouldn’t share! 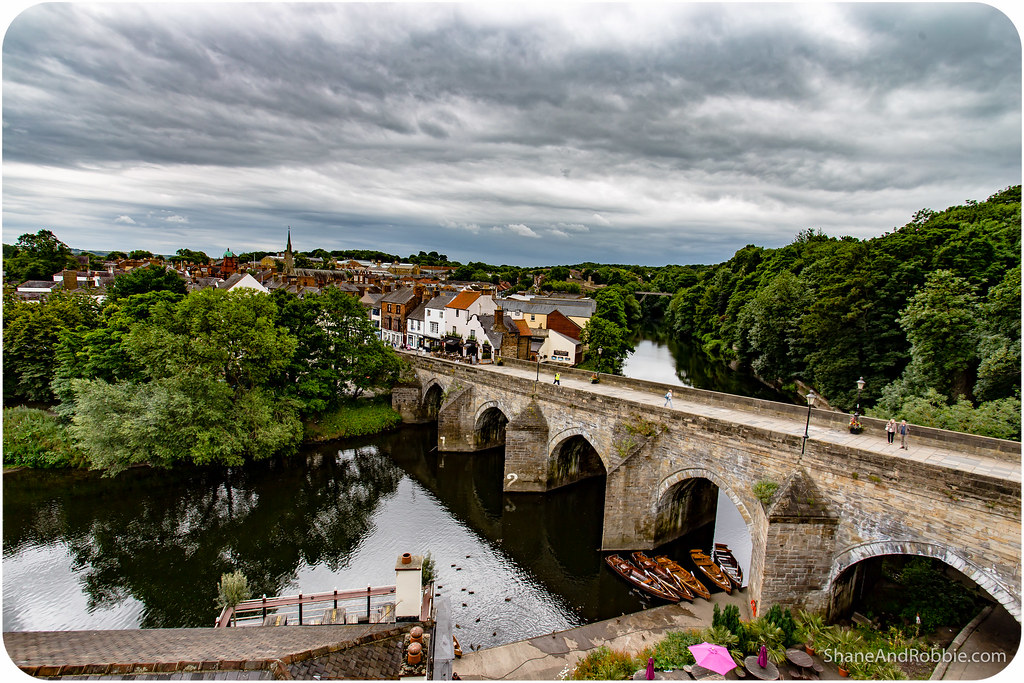 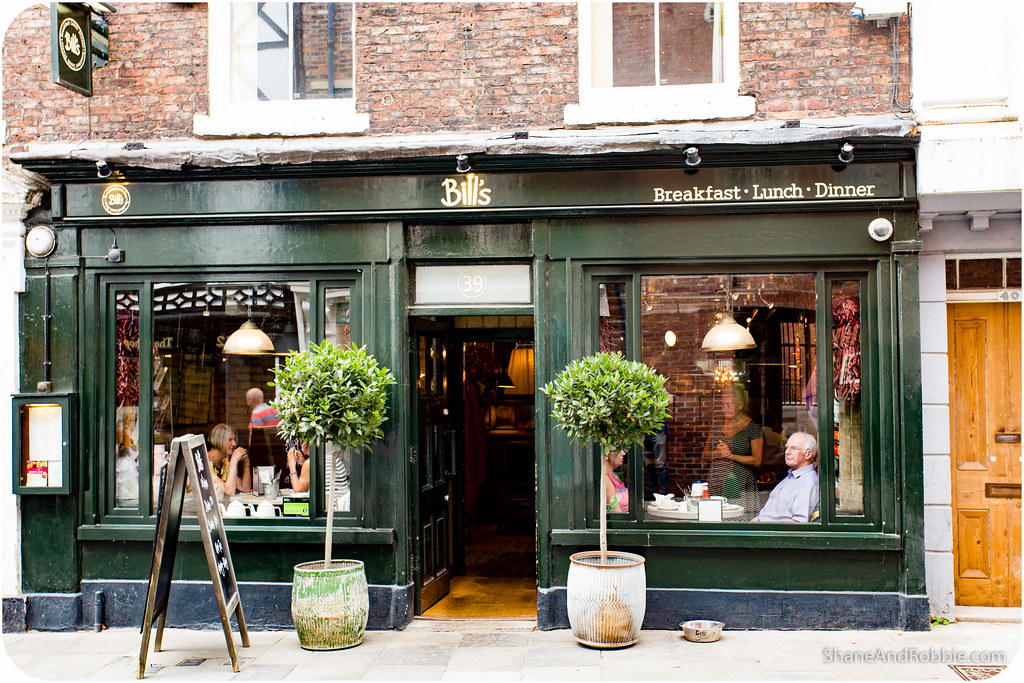 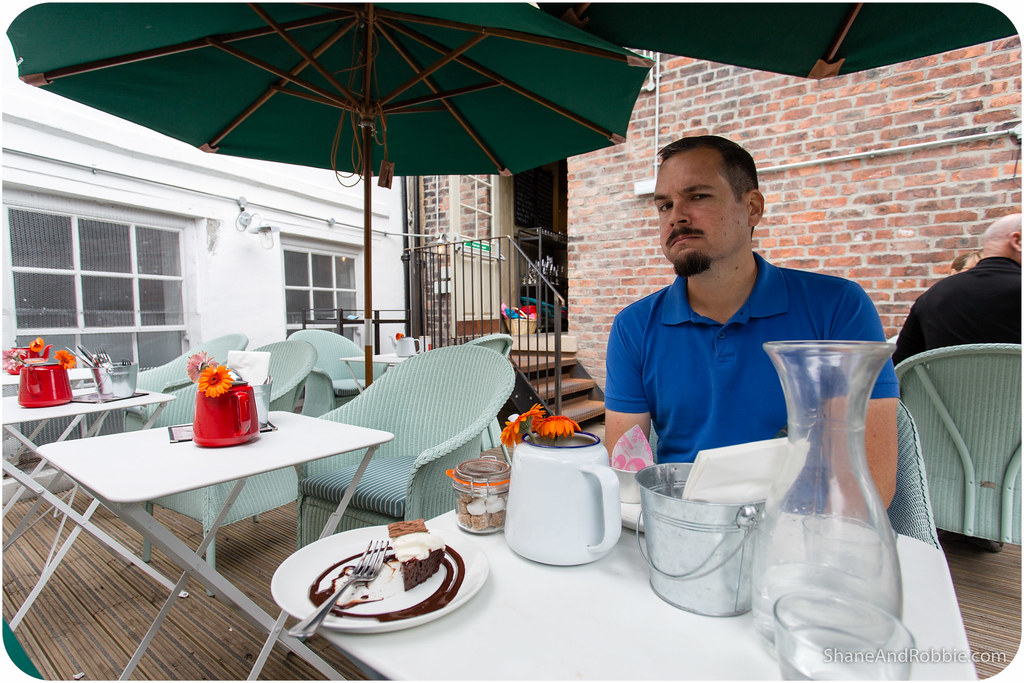 After our sumptuous repast we decided to try and work some of the chocolate brownie and cream off with a walk around Durham Hill. It was lovely, walking through the forest and along the River Wear, enjoying the truly craptacular* English summer weather**.

*For the uninitiated: craptacular = spectacularly crap.

**It’s a cliché, sure, but what we’ve experienced of the “summer” weather up here in Northern England has been AWFUL! No wonder people here have complexions the colour of fresh milk – there hasn’t been more than 3 minutes of sunshine on any given day and the wind is SO cold. And this is summer?! 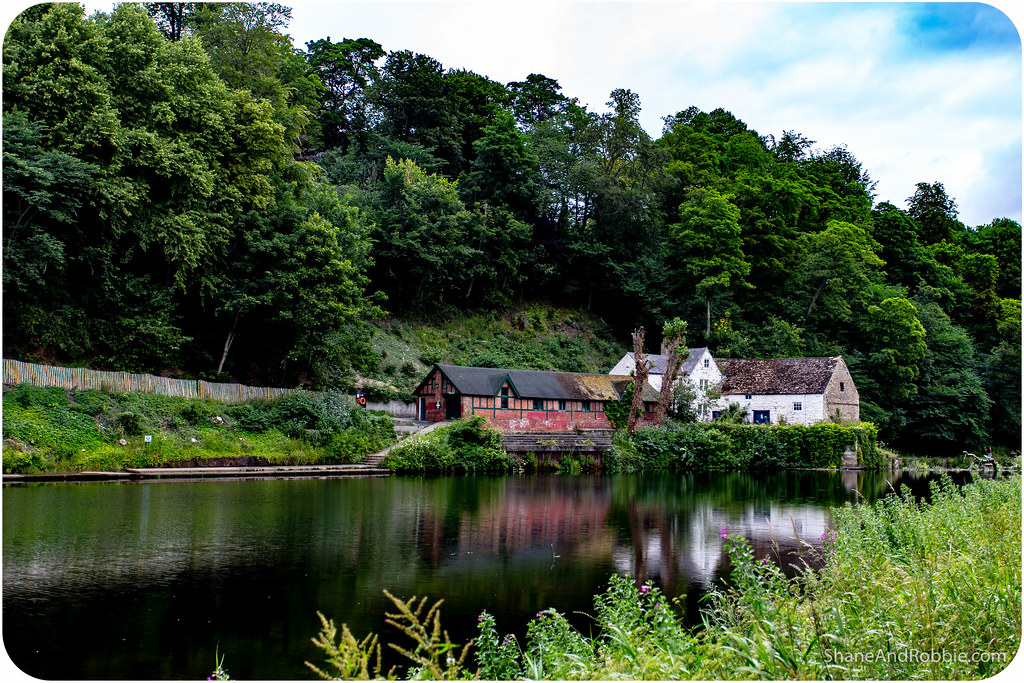 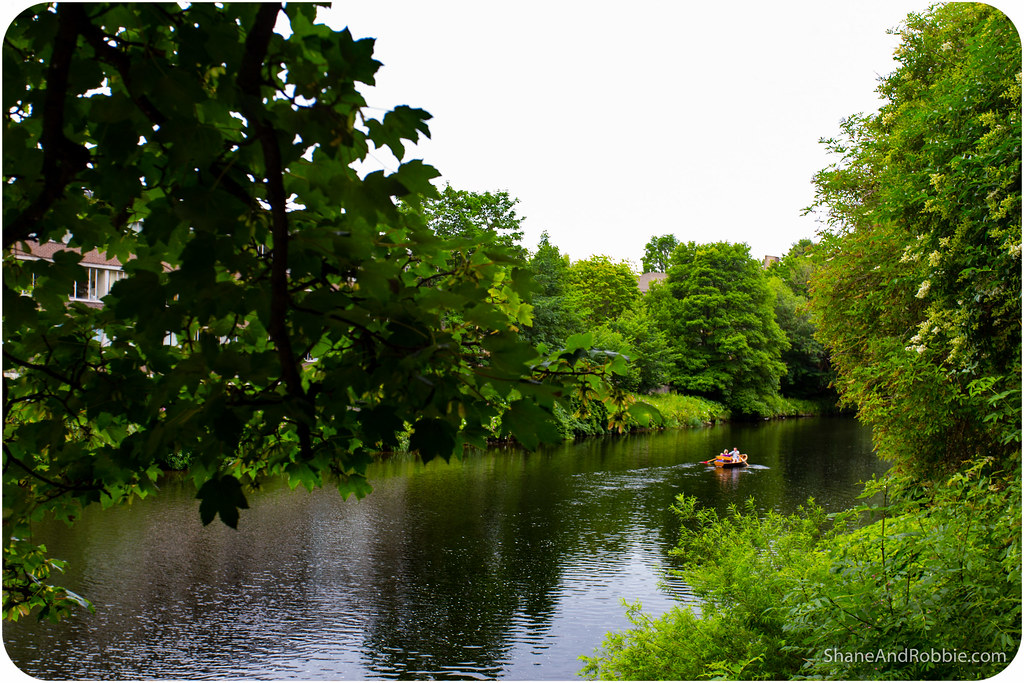 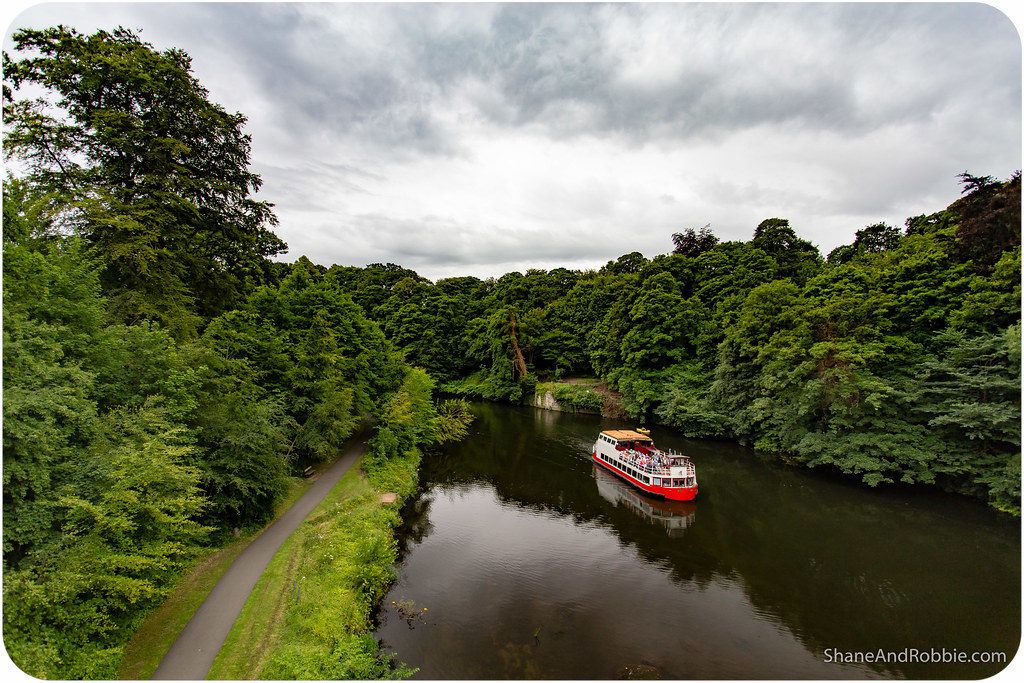 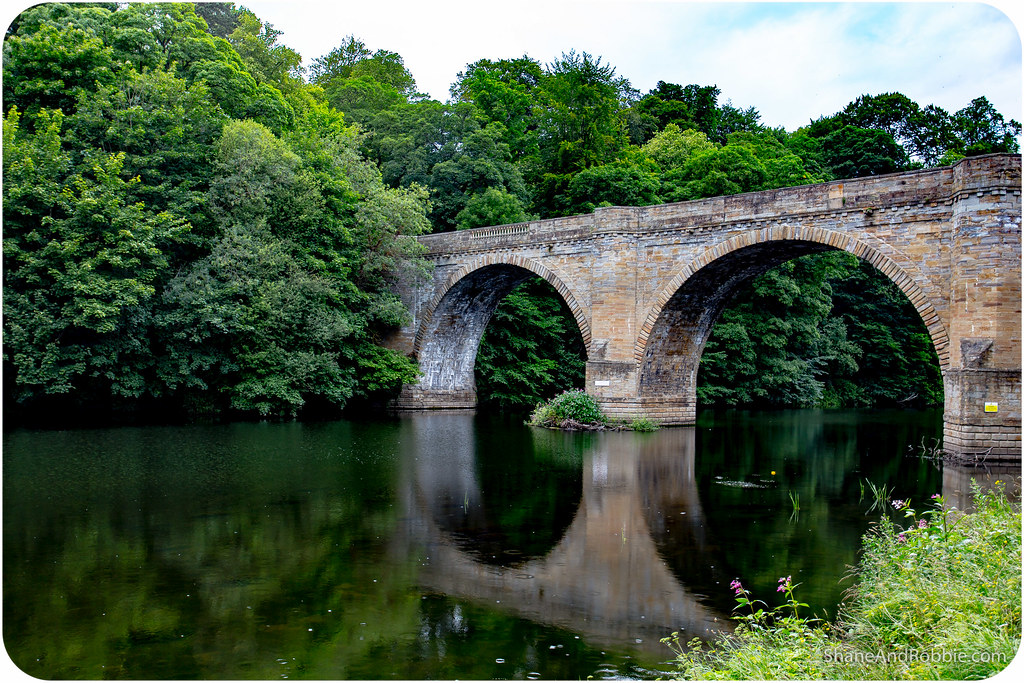 We’re back in Newcastle now, warming ourselves back up after our day trip to Durham and planning our exit tomorrow. We’re going to keep moving Southwards in search of a bit more sun – tune in tomorrow to see if we were successful in our search! 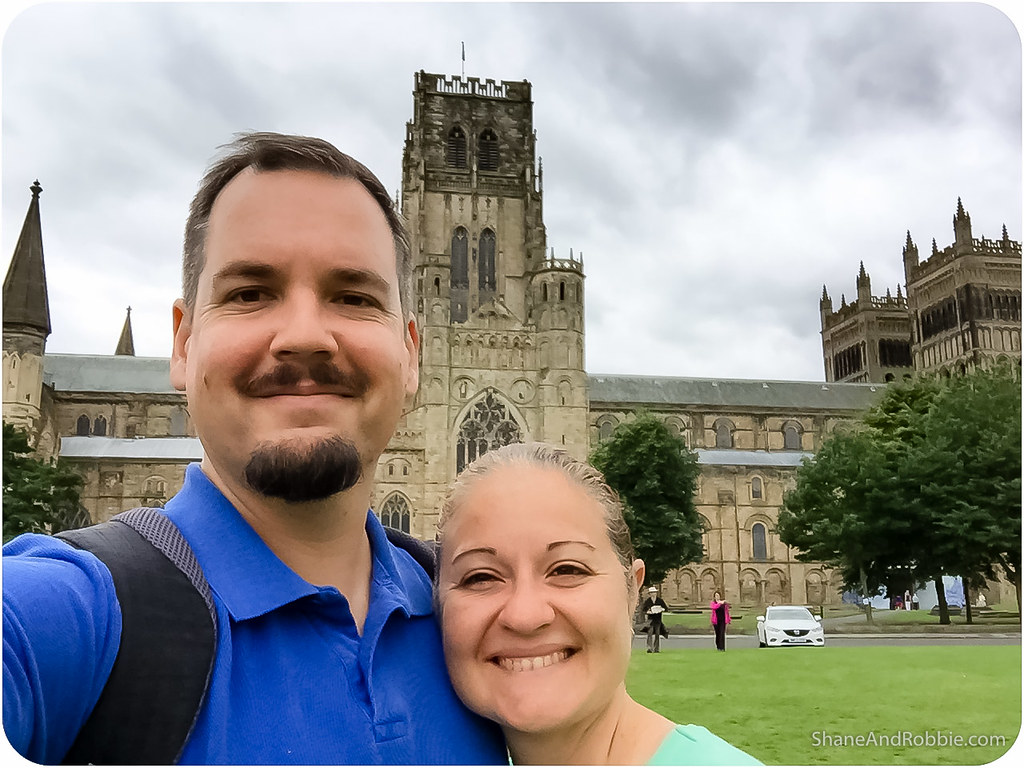