OH WE DO LIKE TO BE BESIDE THE SEASIDE…

There is something quintessentially English about a spending the day at the seaside. It’s nothing like spending a day at the beach Aus-style (that involves swimming in the warm waters of the Indian or Pacific Ocean, with the sun beating down mercilessly upon you, and the soft shimmer of a heat haze visible across the startlingly white sand). A day at the English seaside, on the other hand, involves a mediocre dose of sunshine (akin to standing under a 60 Watt bulb), braving the cold wind as it blasts in from the Arctic, and the mandatory lunch of fish and chips served with mushy peas. We’ve spent plenty of time down at the beach in Aus, but today was out first ever day at the English seaside. It was a tad chilly, but heaps of fun. 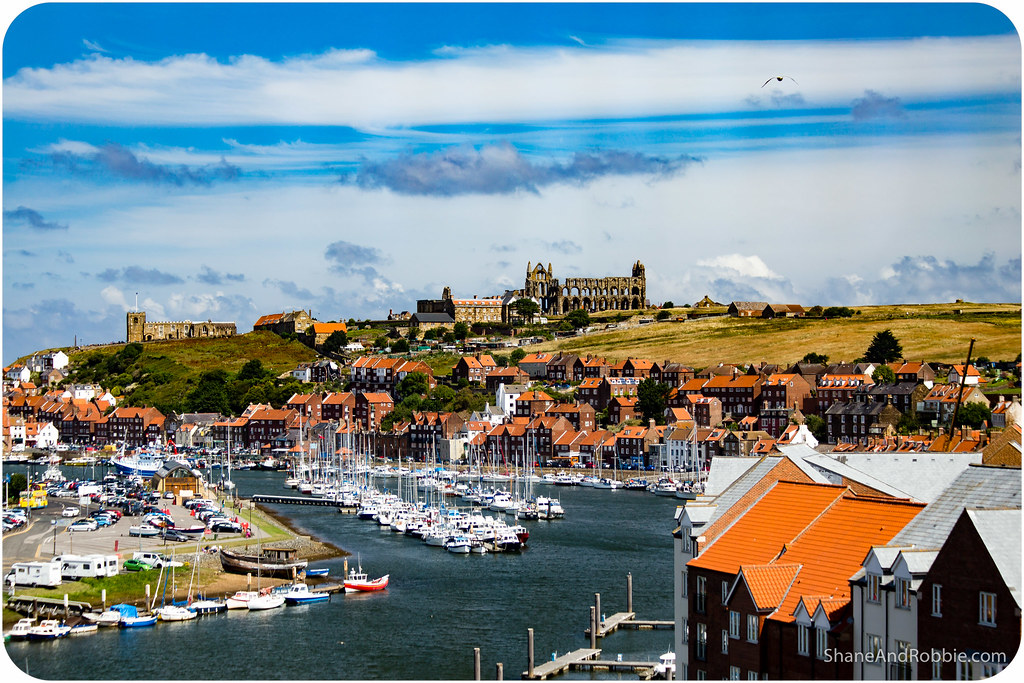 The East Yorkshire coastline is famous for its English seaside resort towns (e.g. Scarborough). This was where women prone to fainting spells, as well as the infirm, elderly, and convalescing, were sent to recover. The miraculous healing powers of the bracing North Sea air has been attracting visitors to the Yorkshire coast since the 18th century, and today we joined a few thousand of our British friends for a wander around the seaside town of Whitby. 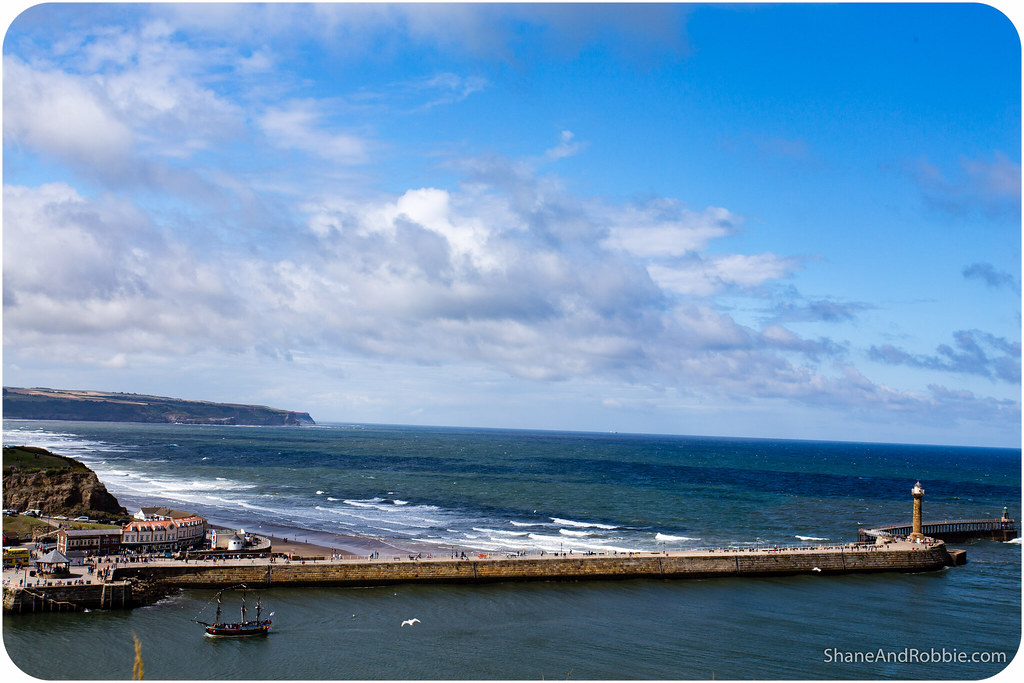 Nestled along the banks of the River Esk, right where the river meets the North Sea, Whitby was once a sleepy little fishing village that was “discovered” by the tourist crowd in the Georgian period. Ever since then, the town has played host to hordes of summer seaside enthusiasts. We caught the bus out to Whitby this morning and had to fight for a seat as it was packed with bucket-and-spade wielding kids, their parents, and a bunch of family canine companions*. Seems a day at the seaside is THE thing to do on a sunny (albeit windy) summer’s day!

*Dogs go everywhere with their people in Europe. It’s AWESOME! We’ve seen them on buses, trains, and planes; in cafés, restaurants and in pubs; and walking along city streets, old city walls, through the moors, forest and fields. Most of the time the dogs are well behaved and tolerant of all the human and non-human traffic around them. It’s just great because it means your WHOLE family can go on holiday together! In Aus everyone seems to be allergic to dogs – you can’t bring them anywhere with you and they are most certainly not allowed on public transport or in eateries. It’s a national tragedy really because what it means is that every year millions of families go on holiday and LEAVE THEIR PUPPIES BEHIND. Such sadness! 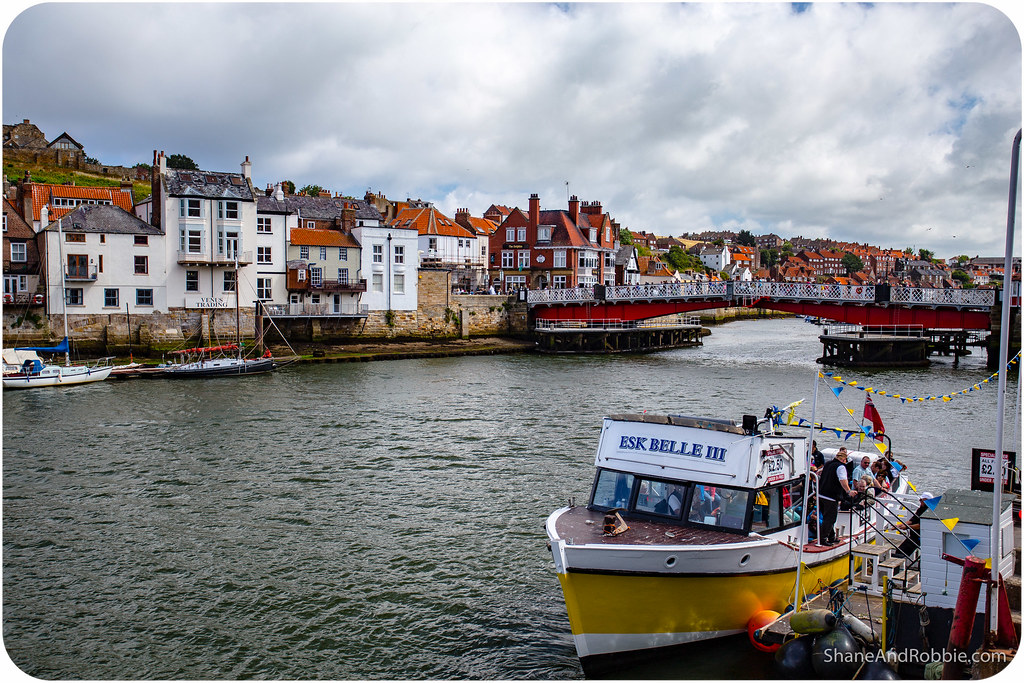 The bus ride from York to Whitby took us through the North Yorkshire Moors National Park. The scenery was beautiful, with hills painted purple due to the flowering heathers and farmland as far as we could see. 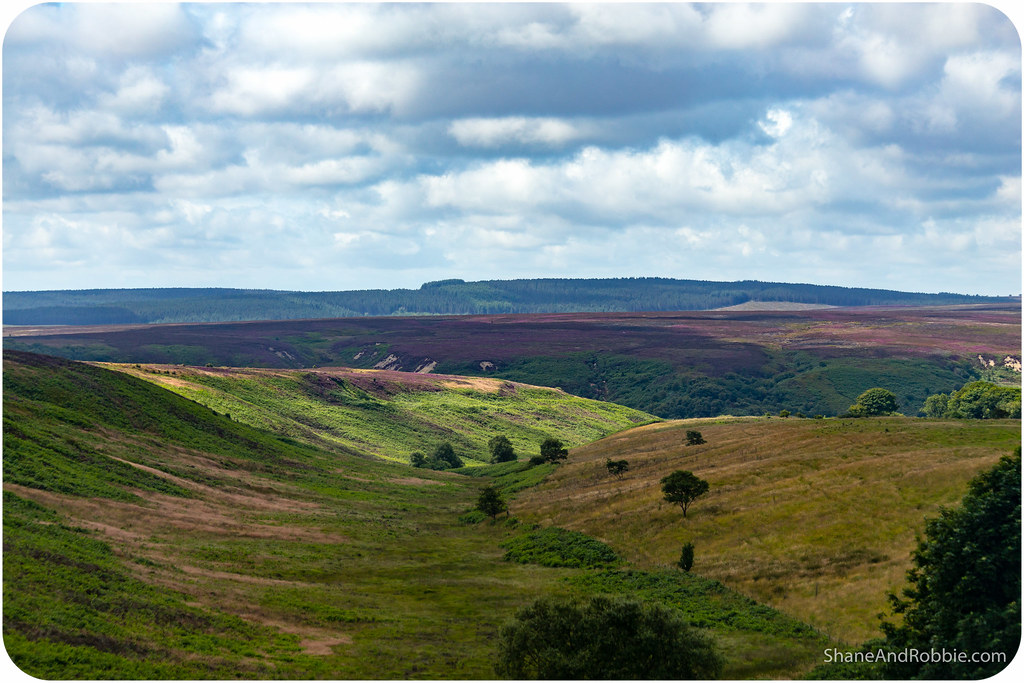 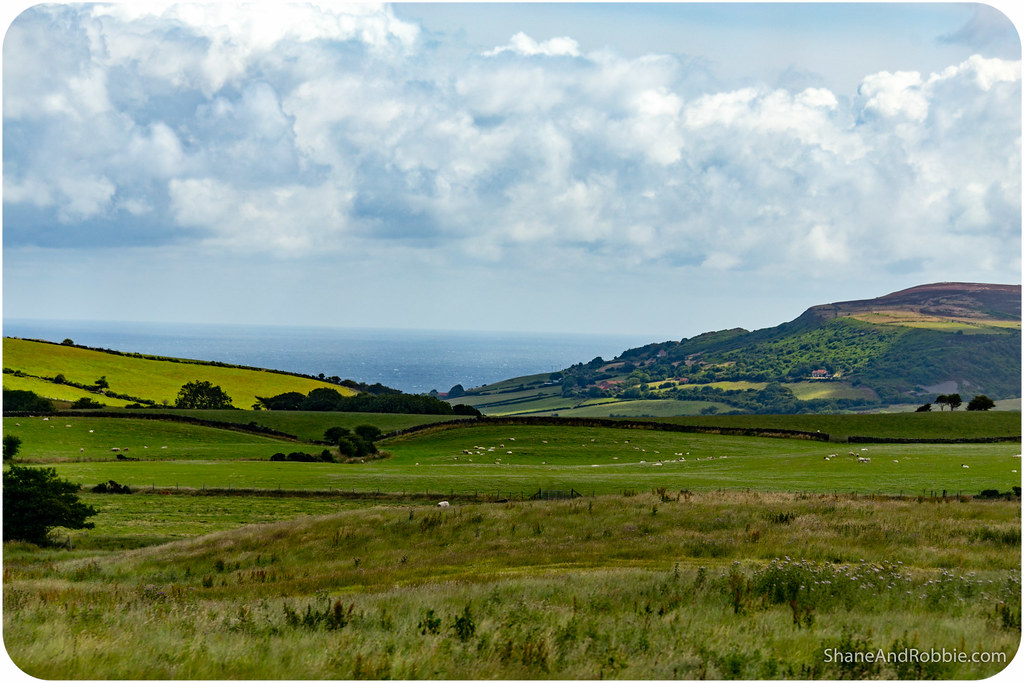 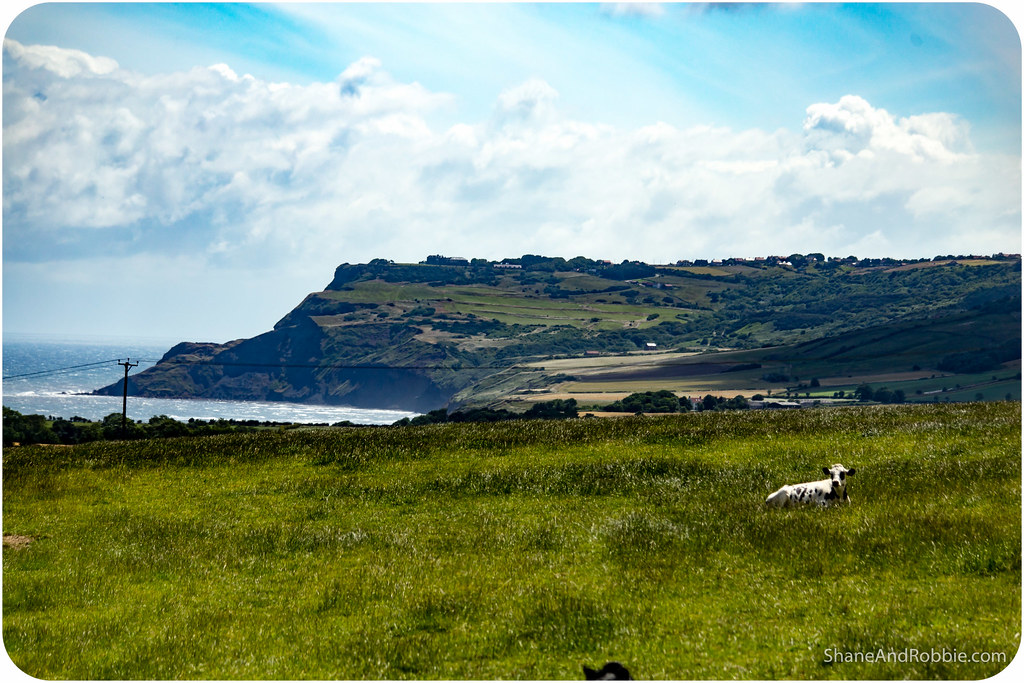 When we eventually arrived in Whitby the first thing that struck us was the architecture. This is one cute town! Seems most of the town was renovated during the 18th century, as tourists began arriving in search of that famed medicinal sea air. 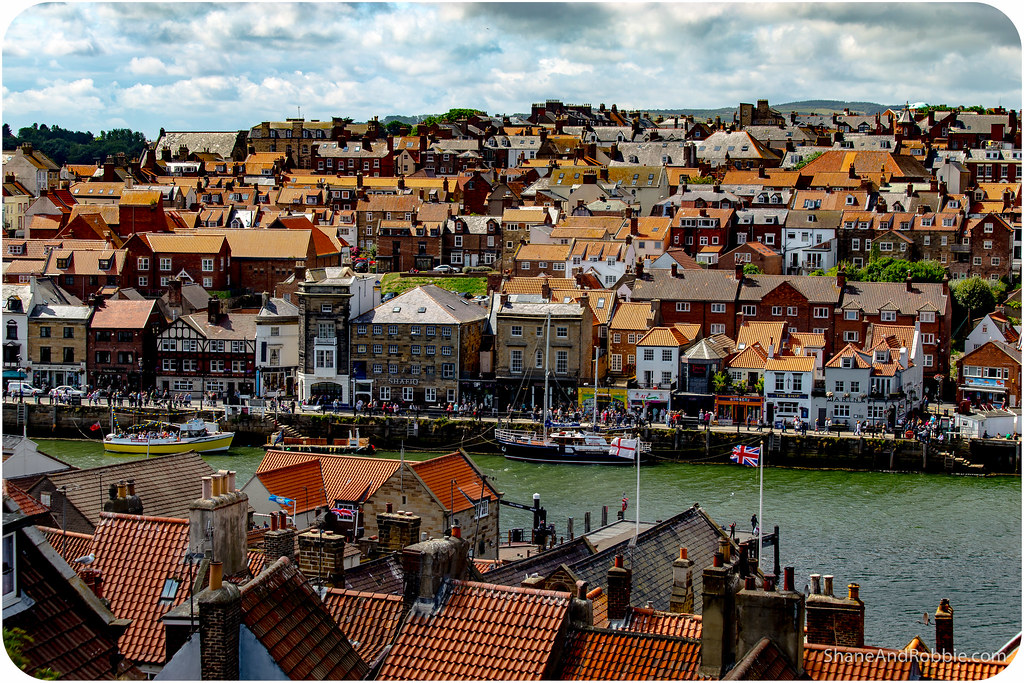 The second thing that struck us was how busy the place was. So many people*! I guess that’s what you get for going to the seaside on a Saturday during school holidays…

*We’re just not used to crowds like this at the beach. Our beaches in Aus are kilometres long and (except for Bondi in Sydney which gets stupidly busy), you never have to share your piece of the beach with more than a dozen other people. 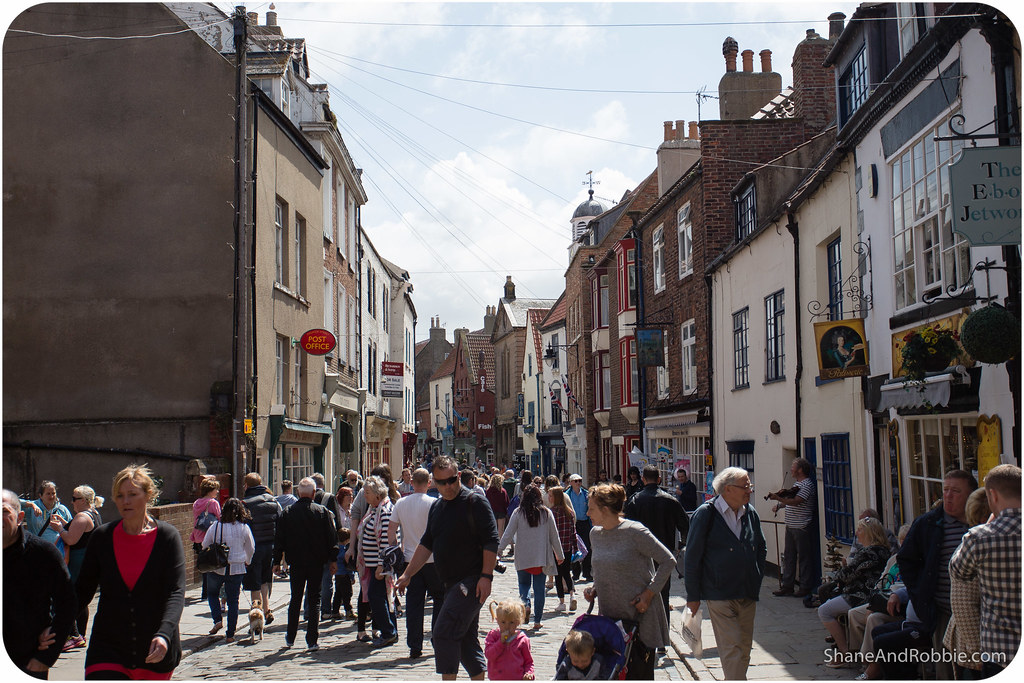 Whitby was not always a bustling little resort town, however; this used to be a fishing and whaling settlement, and an important shipbuilding centre. It was in Whitby, in fact, that the HMS Endeavour was built (this was the ship commanded by Captain James Cook on his voyage discovery to Australia and New Zealand). The connection with Captain Cook doesn’t end there: we found out today that young James learnt his sailing skills working out of Whitby too. 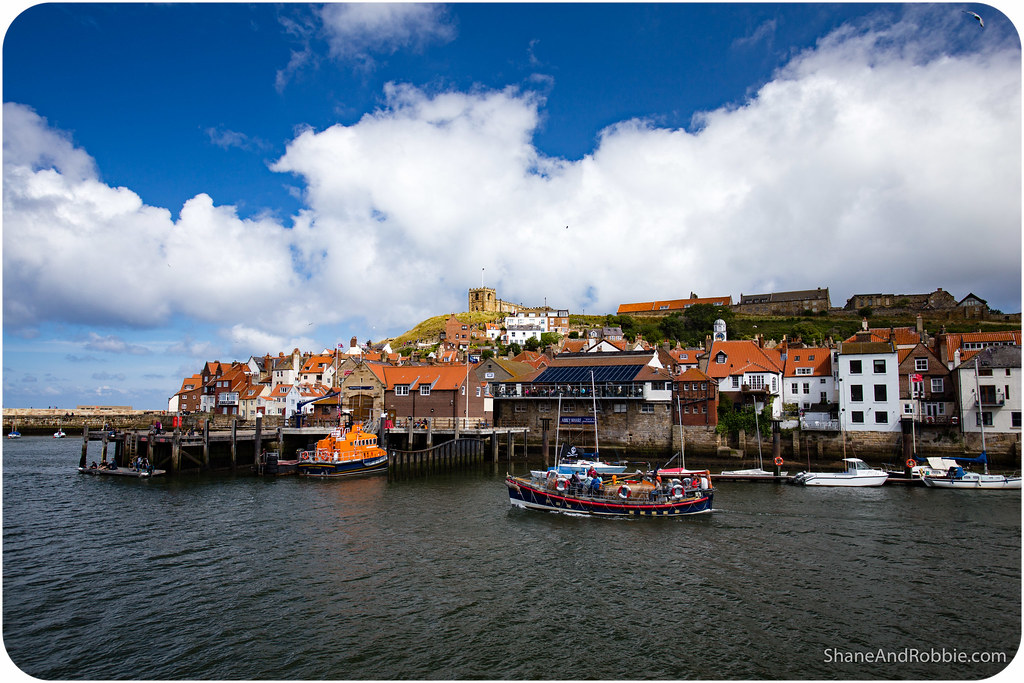 There’s an even earlier chapter to Whitby’s history that we went to explore too: its role as an important religious centre. 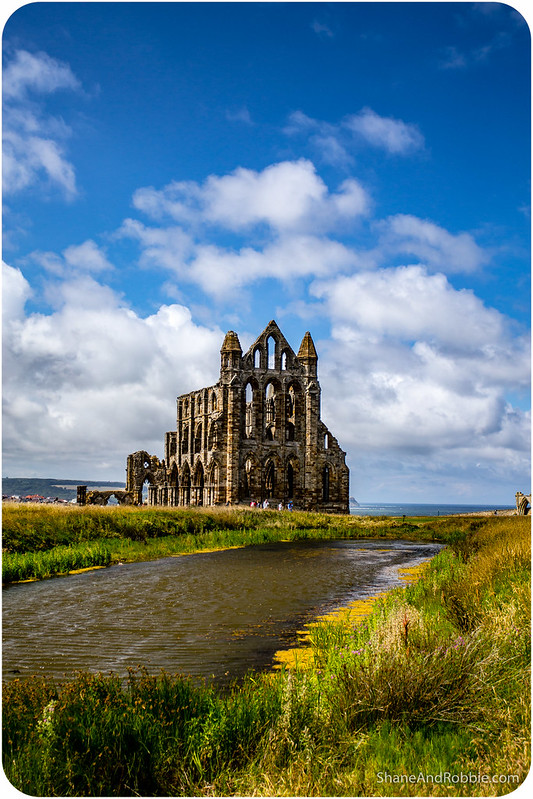 High above the harbour, perched on the cliff overlooking the Esk estuary, stands Whitby’s crowning glory: the ruins of Whitby Abbey. The skeletal remains of the abbey are just a vestige of what was once a very wealthy monastery. 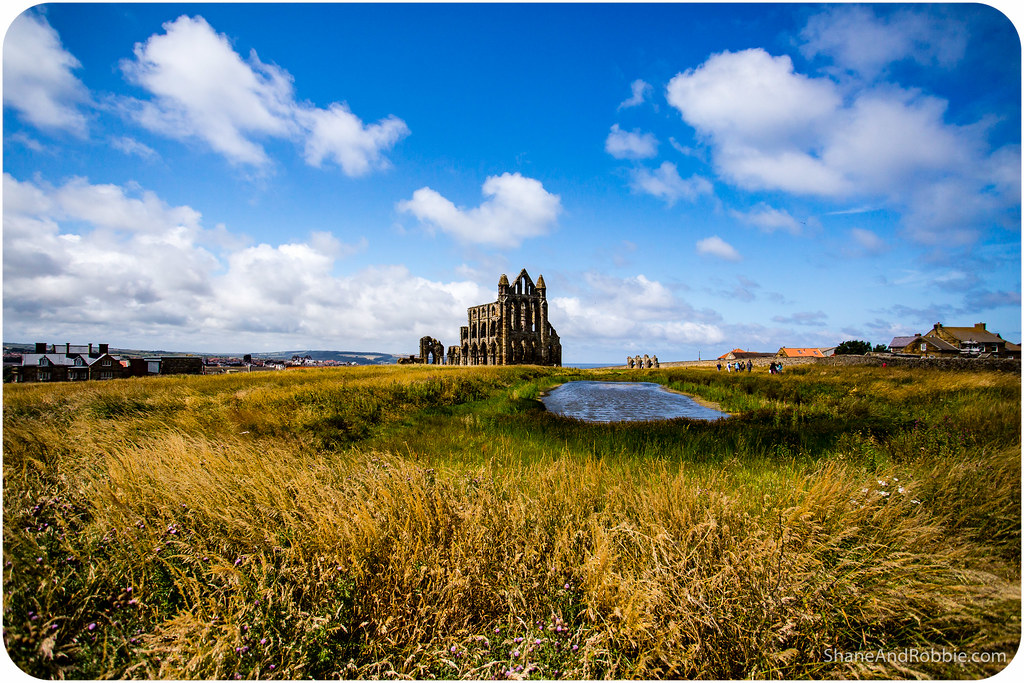 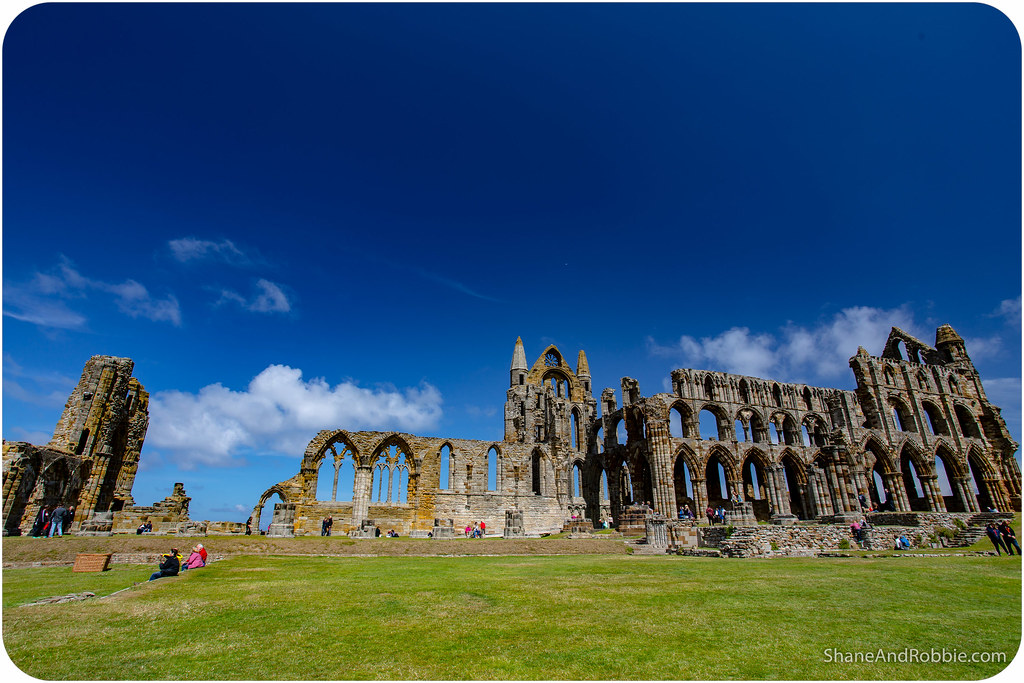 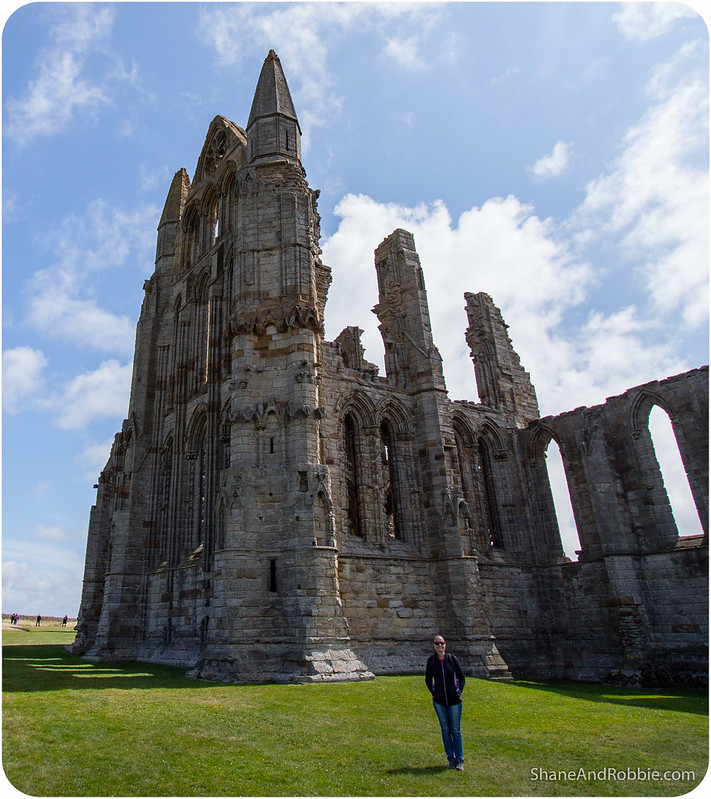 Originally founded in 656, Whitby Abbey was an important religious site for early Christians in Britain. In 867, however, the monastery was destroyed by Viking raiders. Fortunately it was rebuilt by the Normans and grew significantly in wealth and prosperity over the next 500 years, becoming a significant centre for religious learning during the Middle Ages. In 1539 the monastery’s glory days came to an end once and for all though as it surrendered its authority and riches to the English crown when Henry VIII dissolved the monasteries. 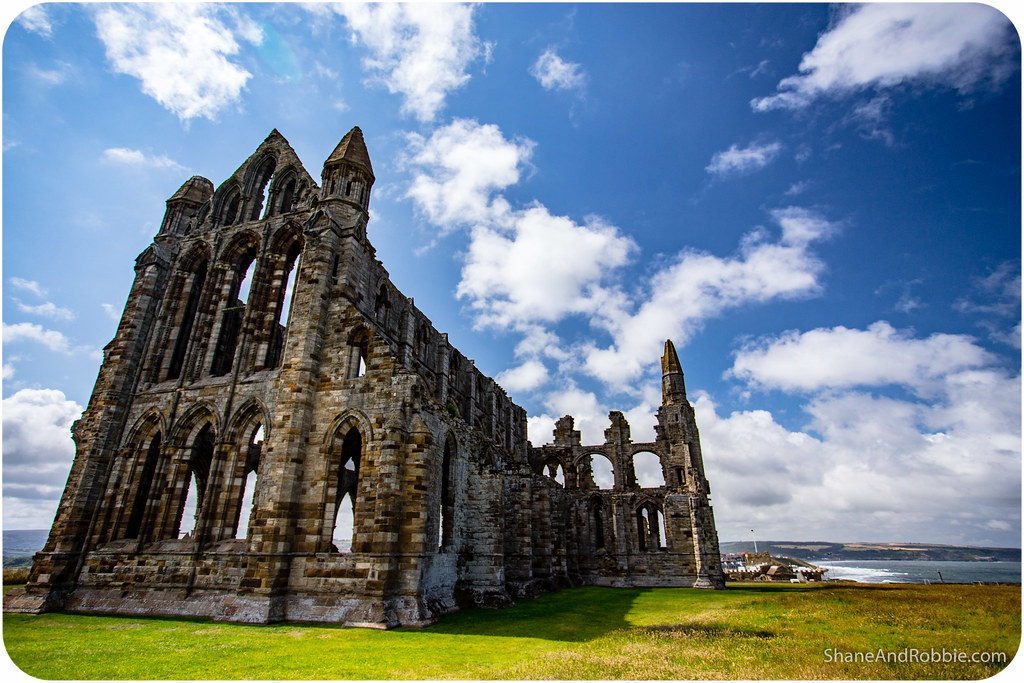 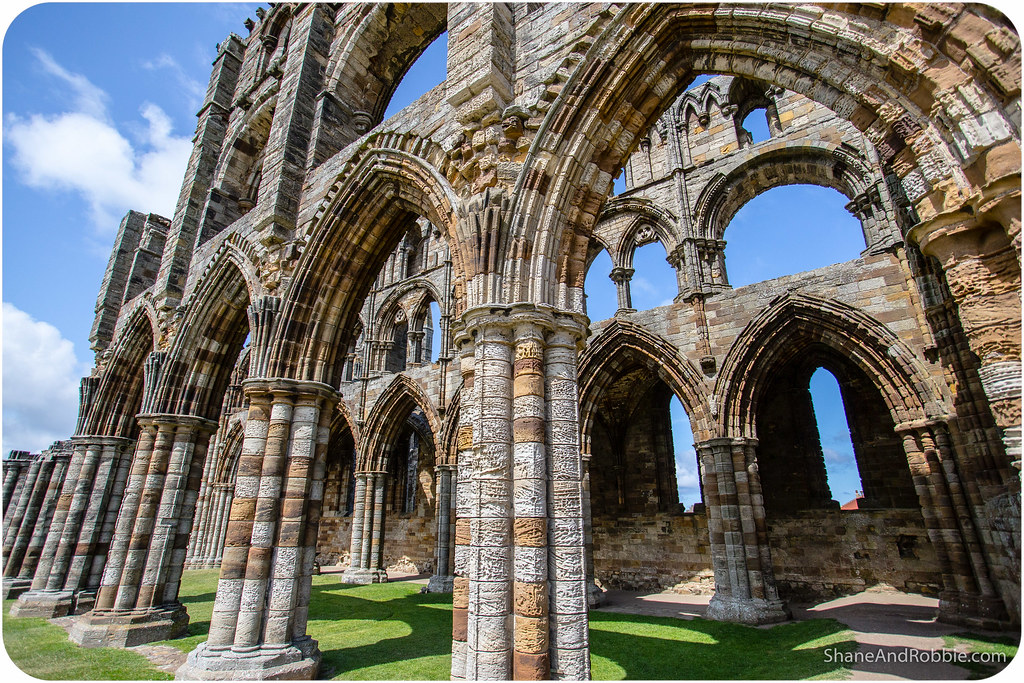 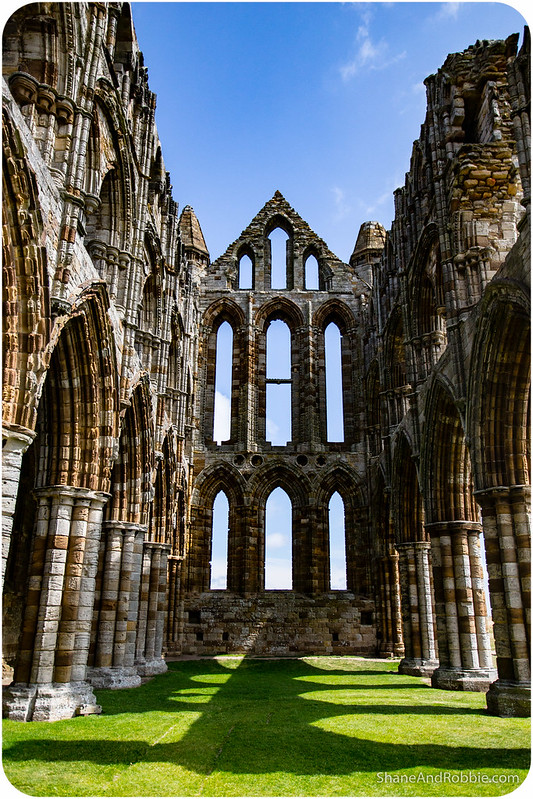 Whitby Abbey ruins are evocative, especially given their position, perched dramatically on the cliffs of the Yorkshire coastline. The graveyard surrounding the abbey adds to this mystique. 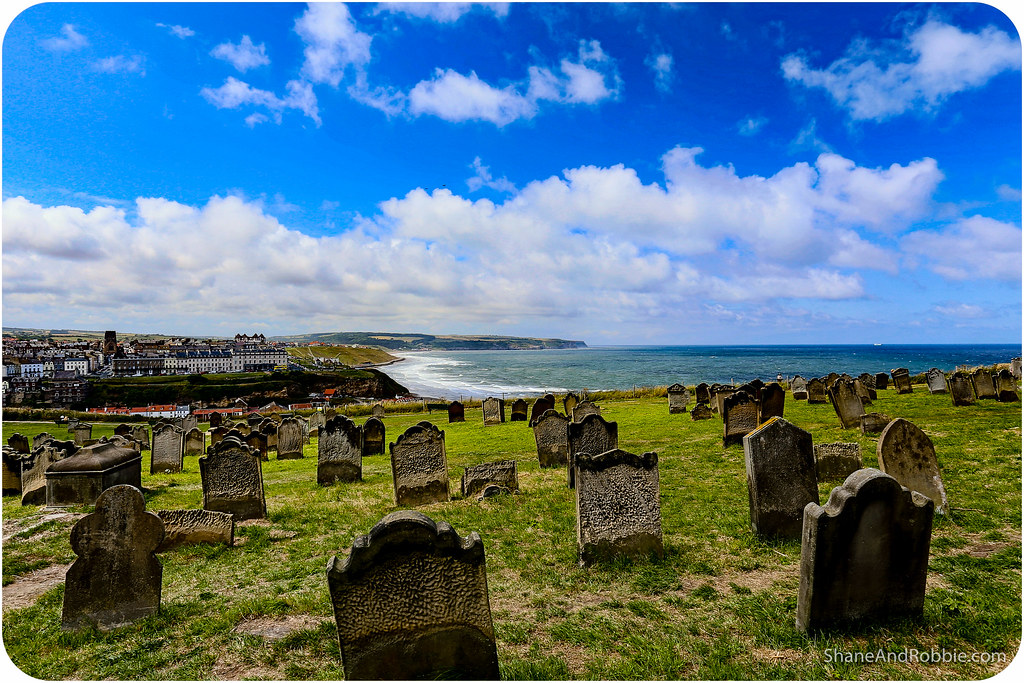 It was the eerie vision of Whitby Abbey and its surrounding graves that supposedly inspired Bram Stoker to set (part of) his famous 1897 Gothic novel “Dracula” in Whitby* (Stoker holidayed in Whitby in 1890). Stoker’s Count Dracula is shipwrecked off the Yorkshire coast whilst on his way to London; he comes ashore in the guise of a black dog and wreaks havoc on the town. Here too Mina runs up the many steps behind Whitby town to try and save her friend Lucy from the evil Count Dracula.

*This association attracts crowds of modern-day Dracula and Gothic fiction fans to Whitby. There’s even a small museum in town dedicated to all thing Dracula-related (which we avoided as it sounded just a bit too naff for us). 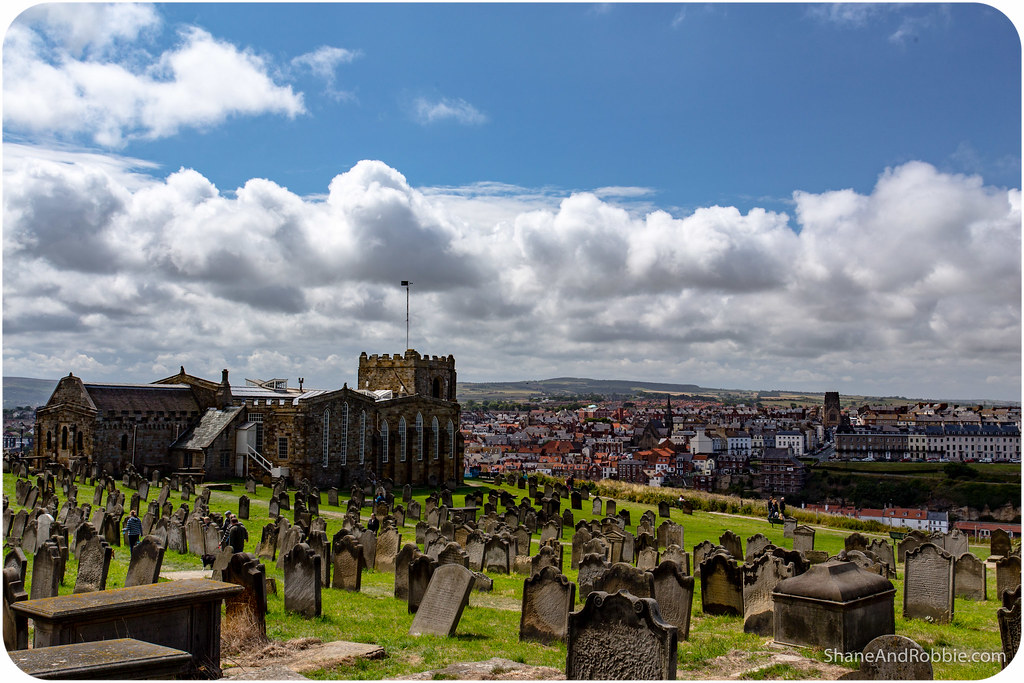 Having spent our day enjoying the seaside wonders of Whitby we came home late this afternoon only to find York had been invaded by an army of well dressed, very excited, older* people. The closer we got to the B&B we’re staying in, the thicker the crowds got. And soon we could hear the faint strains of (bad) pop music wafting through the air. “What could all this mean?”, we wondered. Well…. turns out Sir Tom Jones is playing here tonight, and the concert venue happens to be the York racecourse, right across the road from where we’re staying! We’re not really fans of Tom’s particular brand of tunes, but it is quite funny to be sitting here, relaxing in our room with the window open, being serenaded by Tom Jones! A free Tom Jones concert’s not a bad way to end our sojourn in York…

*Older than us, that is. 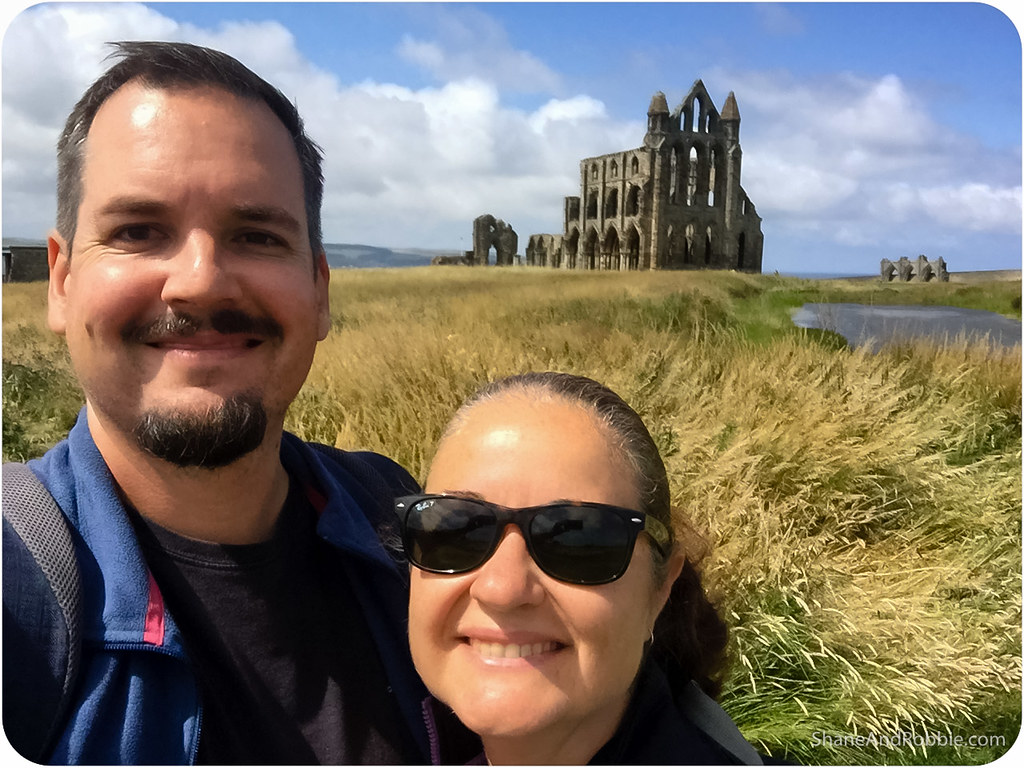