A WET AFTERNOON IN STRATFORD-UPON-AVON

Stratford-Upon-Avon is a relatively small town situated along the banks of the River Avon. Like many towns in the region, Stratford-Upon-Avon started out as a market town during the Middle Ages. Then something happened that really put the town on the map: on 23 April 1564 local alderman John Shakespeare and his wife Mary Arden, the daughter of an affluent landowning farmer, had a son. They named him William and…, well, you know the rest of the story. Stratford-Upon-Avon is where “The Bard” was born, lived for most of his life, penned many of is works, got married, had a family, and died. More than 5 million people a year come to this lovely little town to sea the house where Shakespeare was born, the house he lived in with his wife Anne Hathaway when they retired, the church where he was baptised, the house his daughter lived in, etc, etc. One man’s life has been turned into a multi-million-dollar-a-year industry here in Stratford-Upon-Avon and, even though we are not mad Shakespeare fans, we thought we’d drop by to see what all the fuss was about. 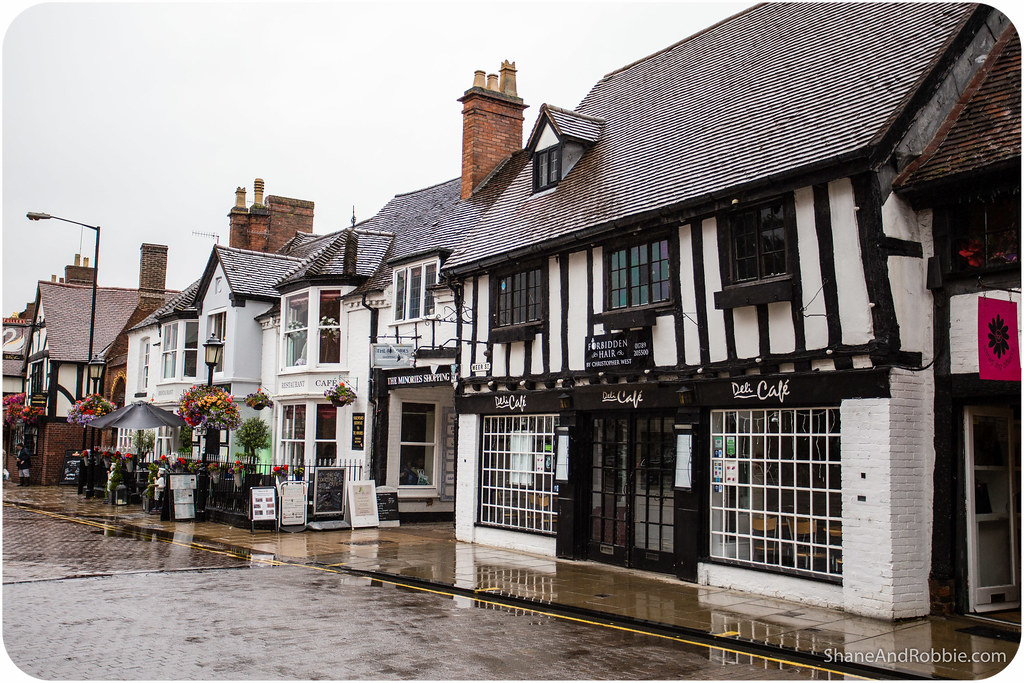 Stratford-Upon-Avon is in the Midlands, the part of England that once formed the early Medieval kingdom of Mercia. We’ve seen this part of the country referred to as “The Heart of England” and have to admit we didn’t know too much about this part of the world before today. In order to educate ourselves (at least a little), we read up on what the Midlands have to offer on the train down here from York* this morning. A few of the more interesting things we learned about the Midlands:

• Its largest city is Birmingham, which is also the second largest city in the UK (after London). Our train journey today took us through Birmingham but we did not linger.

• The Midlands was an important location for the Industrial Revolution of the 18th and 19th centuries.

• It was a Midlander, Sir Isaac Newton, who discovered gravity.

• Anglo-Saxon Mercia (the Midlands) was politically, culturally and militarily far superior to Northumbria (in the north) and Wessex (to the south).

• Stinky, tasty stilton cheese is from these parts.

• With his idea of packaging holidays for groups of like-minded people to enjoy together, Thomas Cook (a Midlander) effectively invented mass tourism in the 1840s.

• The standard English spoken today is Midland in origin; thanks to Shakespeare, many of its most common phrases are too.

*Along with cities like Manchester, Liverpool and Newcastle, York asserts itself proudly as part of the industrialised, “gritty” North. The Midlands started just South of Yorkshire – around Birmingham somewhere. 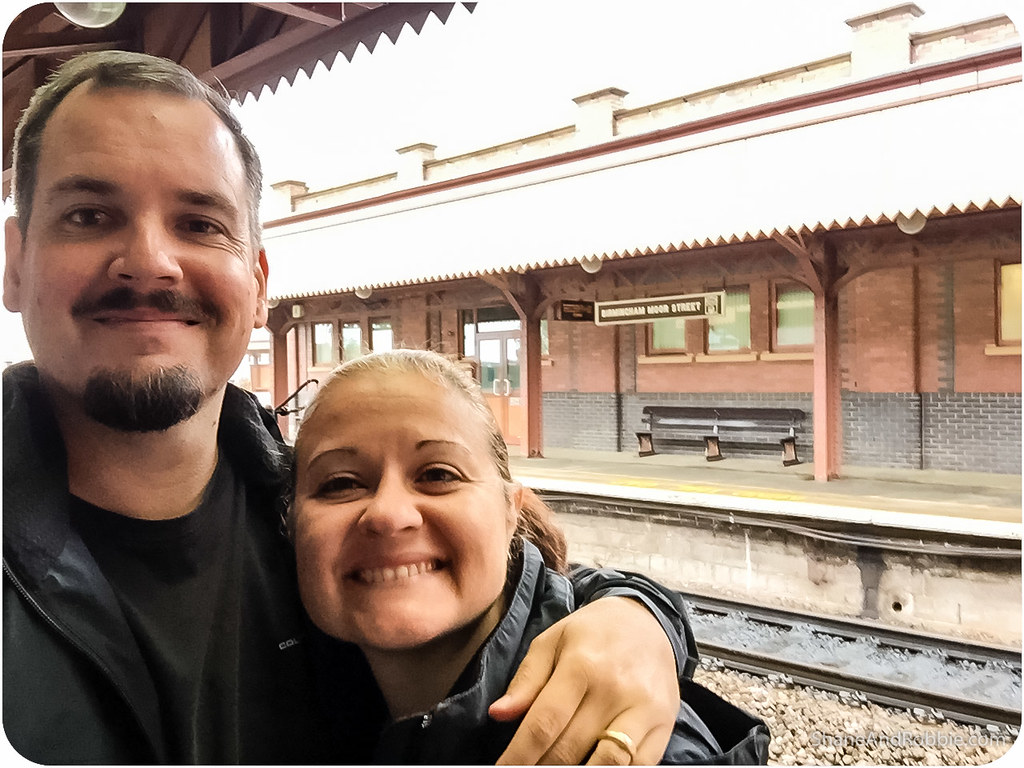 By the time we’d travelled the 250km from York to Stratford-Upon-Avon we’d learnt a bit, seen a little more of the English countryside, and the rain had set in. It seems that today, across the entire country of England, it drizzled, it poured, and it showered. It was also cold – like 10C cold! Summer hey? 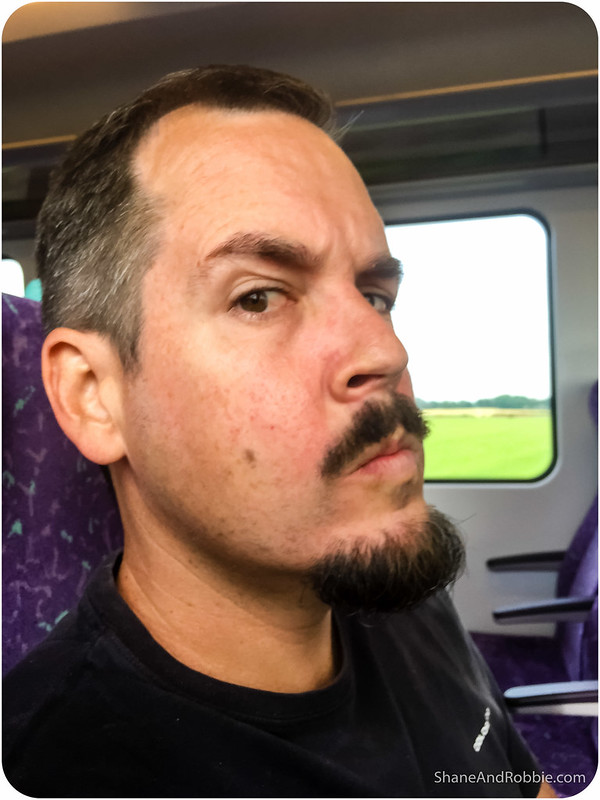 This made the traditional English “Sunday roast lunch at the pub” even more appealing that it already was (why? because pubs are warm and dry). So our first couple of hours in Stratford-Upon-Avon were spent enjoying a lamb roast in the cosy warmth of The Dirty Duck (aka The White Swan), one of this town’s best free houses. 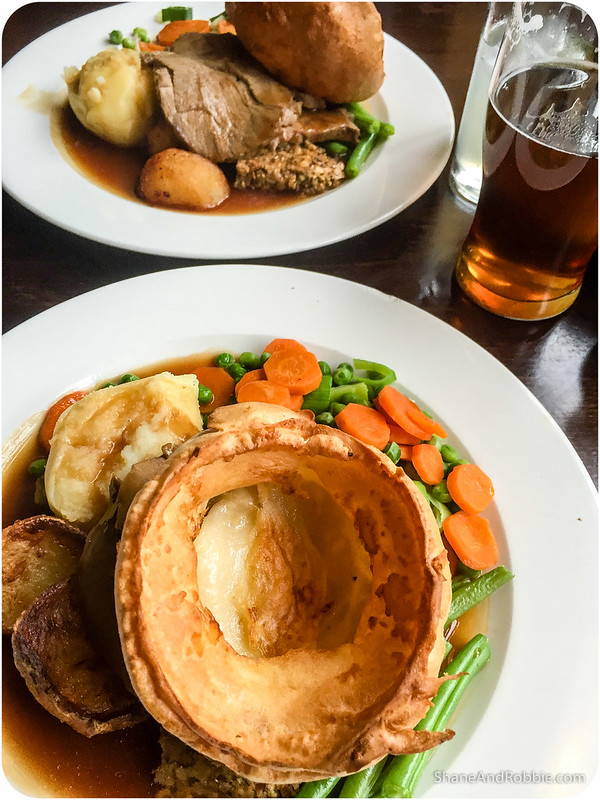 Eventually the rain eased off a little and we felt warm and replete enough to venture outside for some touristing. The main attractions in town are the houses relating to Shakespeare’s* life and the church where he was baptised and is buried. 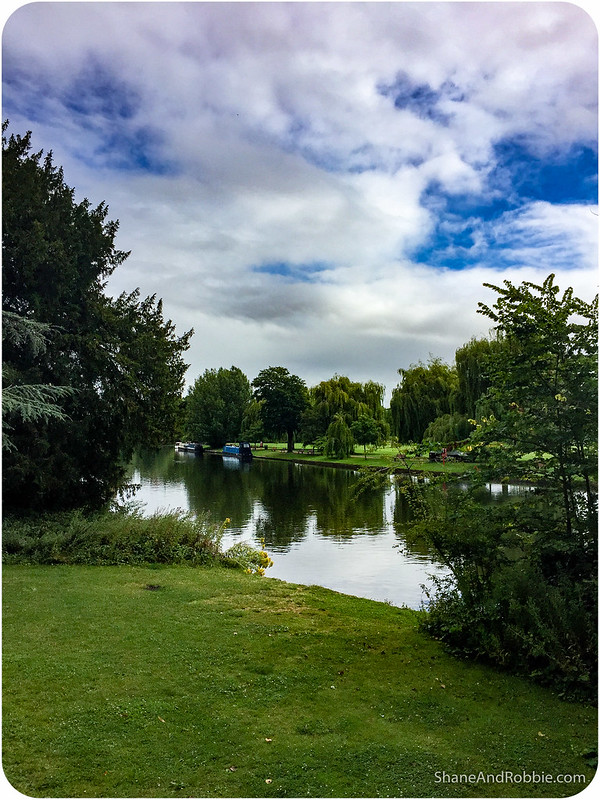 The “Shakespeare Houses” include “Hall’s Croft”, the one-time home of Shakespeare’s daughter, Susanna, and her husband Dr John Hall. Today this is a museum dedicated to all things medicinal. 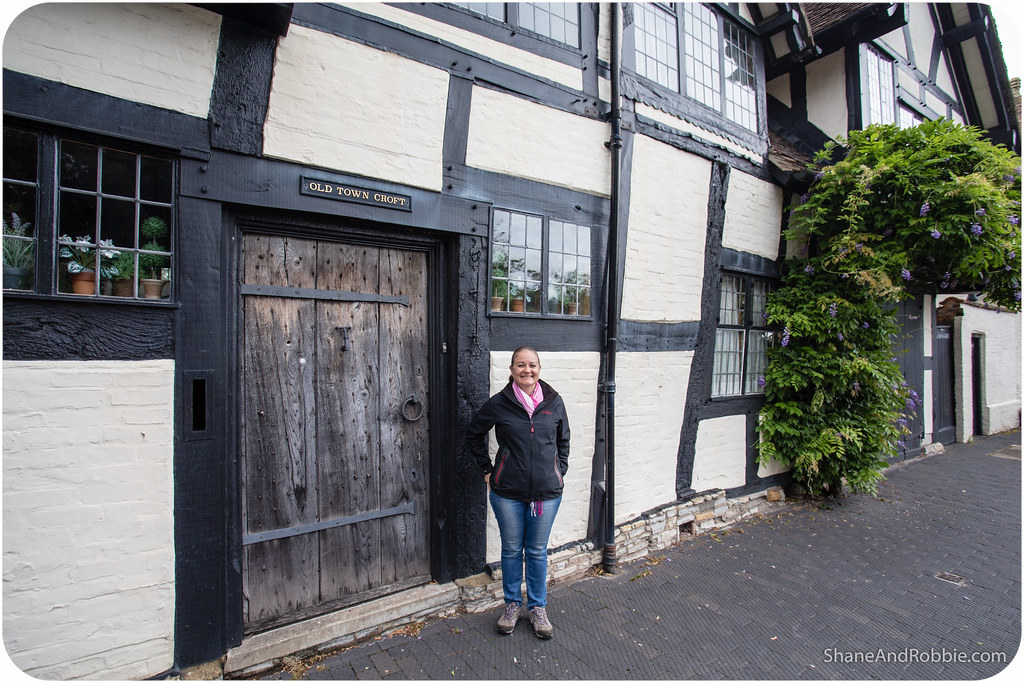 “Shakespeare’s Birthplace” is a restored 16th-century half-timbered house. It is now a small museum dedicated to the poet’s life and works. There’s also “The New Place”, owned by Shakespeare himself and the house where he died.

We also stopped by to see the Holy Trinity Church, where Shakespeare was baptised and is buried. The church dates from 1210 and is Stratford’s oldest building. 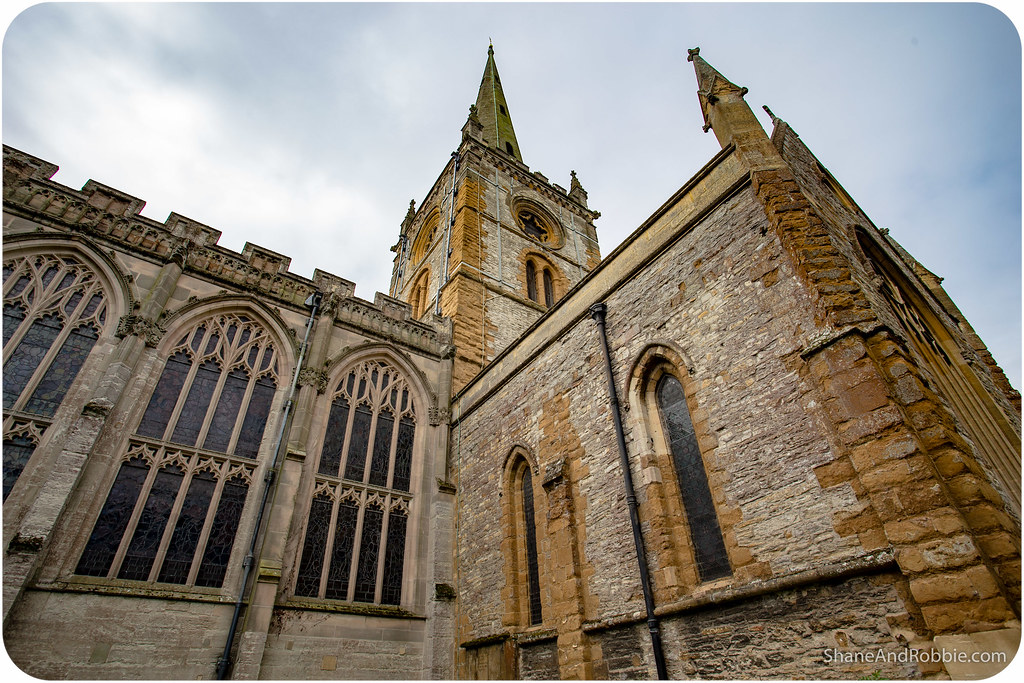 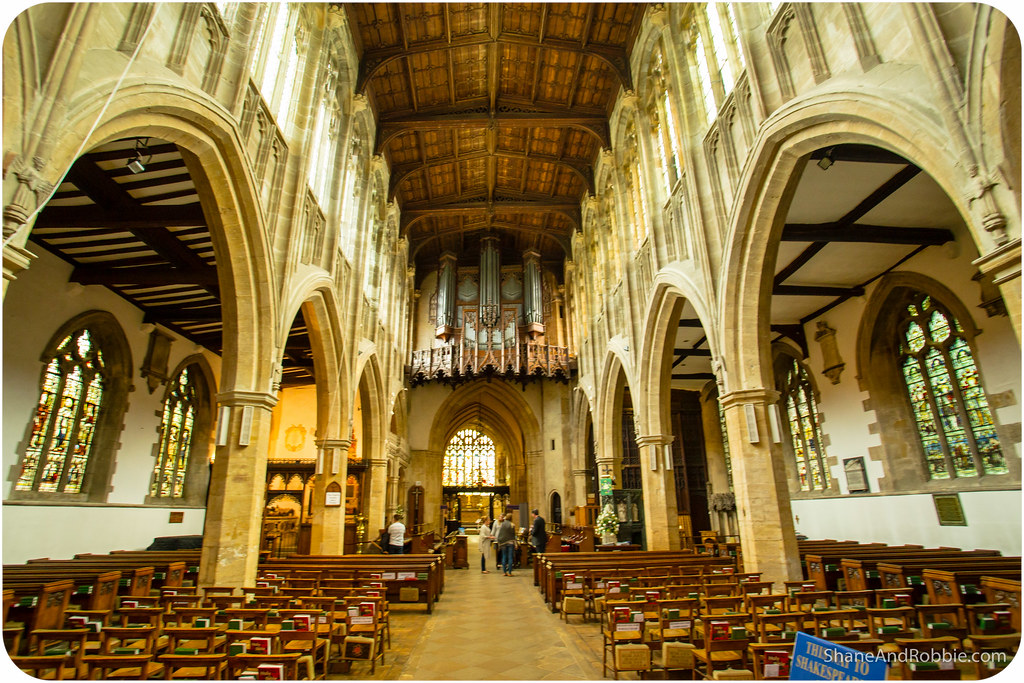 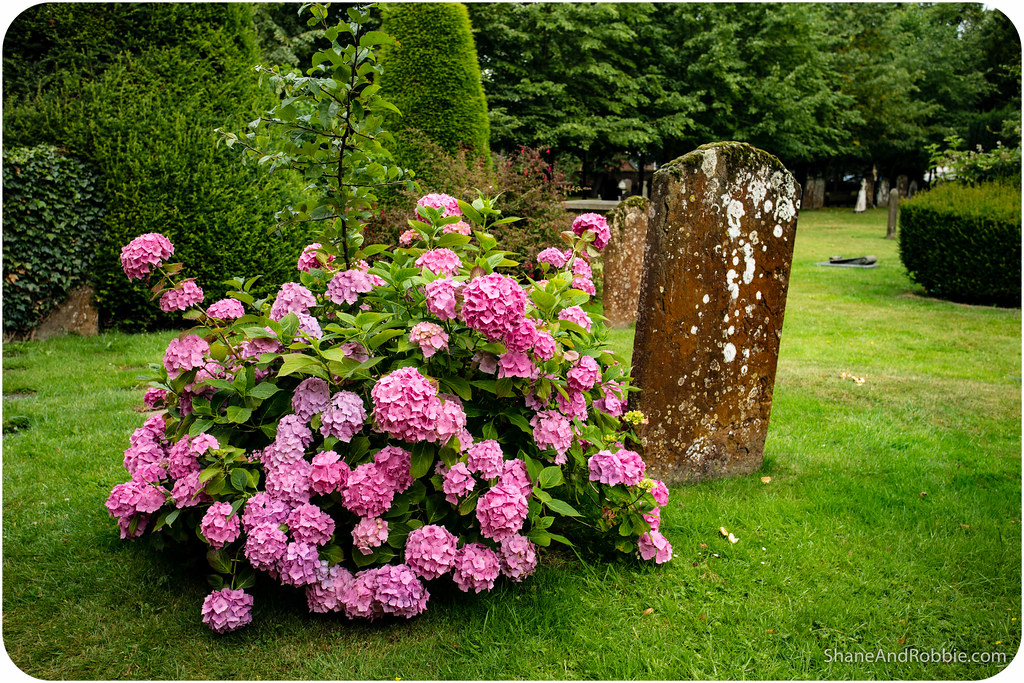 Obviously the Shakespeare theme is what attracts most people to Stratford-Upon-Avon, and though we certainly appreciated seeing the simple origins of the man*, the best part of our day was the stuff that had nothing to do with Shakespeare! Our favourite parts of Stratford-Upon-Avon were the simple things: the beauty of the weeping willows that line the River Avon, the bowed and bent lines of all the beautifully restored Elizabethan buildings in town, the colours of a sweet shop store window, and the warmth and comfort of a 16th century pub when it was cold and wet outside. We can appreciate that none of this stuff would be there (especially the renovated and restored old buildings) if it weren’t for the money tourism brings into town, but all the Shakespeare-related stuff is so ridiculously over-sold and commercialised that it detracted immensely from the experience for us.

*Shakespeare was well educated, certainly, but he wasn’t an aristocrat, that’s for sure; and Stratford-Upon-Avon was a pretty simple little market town in the 1500s. Understanding this made us appreciate how innate his talent really was, and also made us realise that it was no wonder Shakespeare wrote for works that appealed to “the common man”! 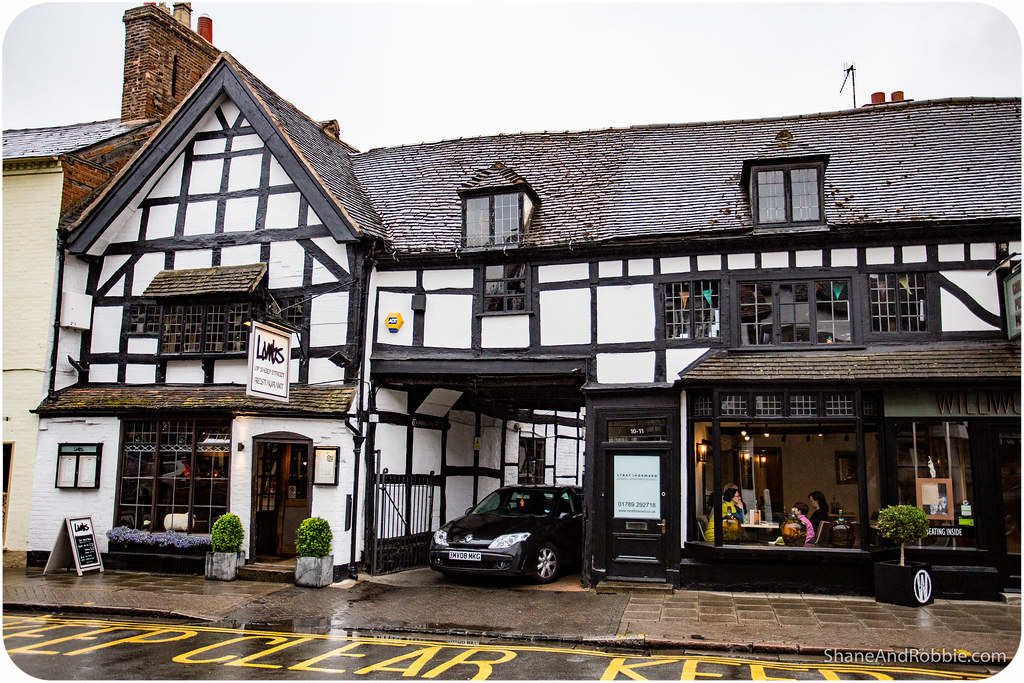 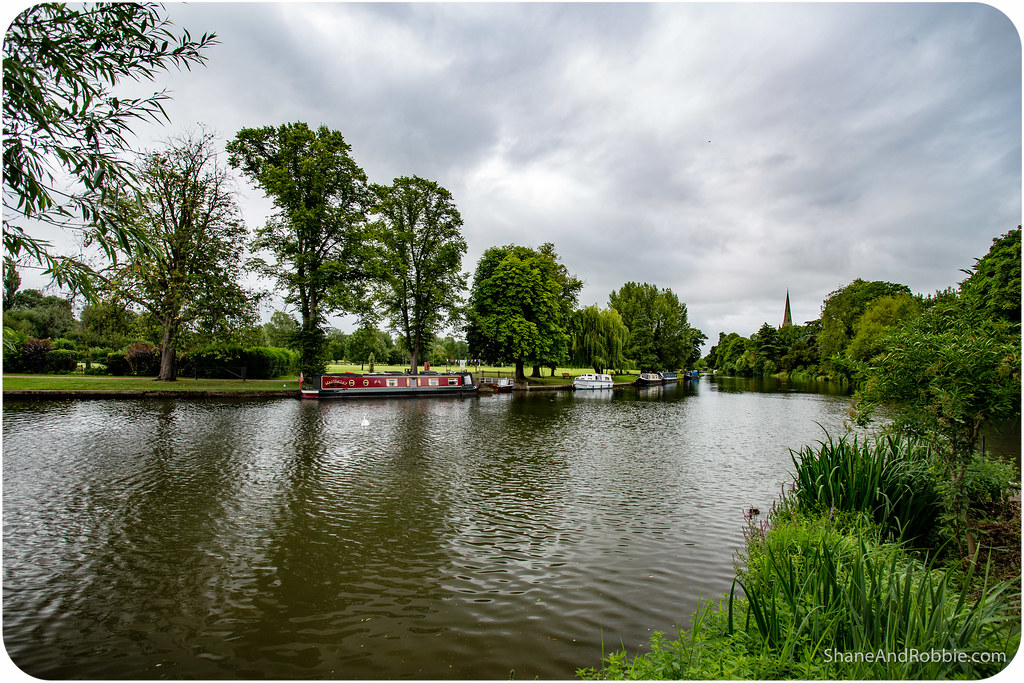 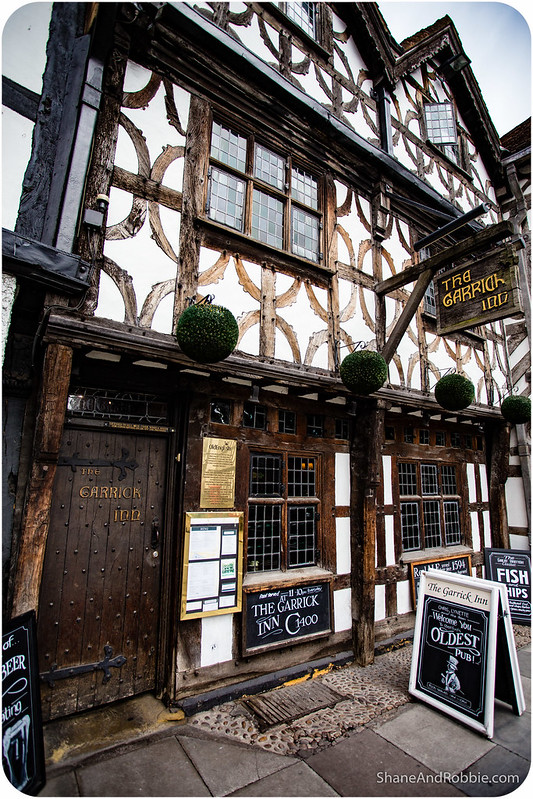 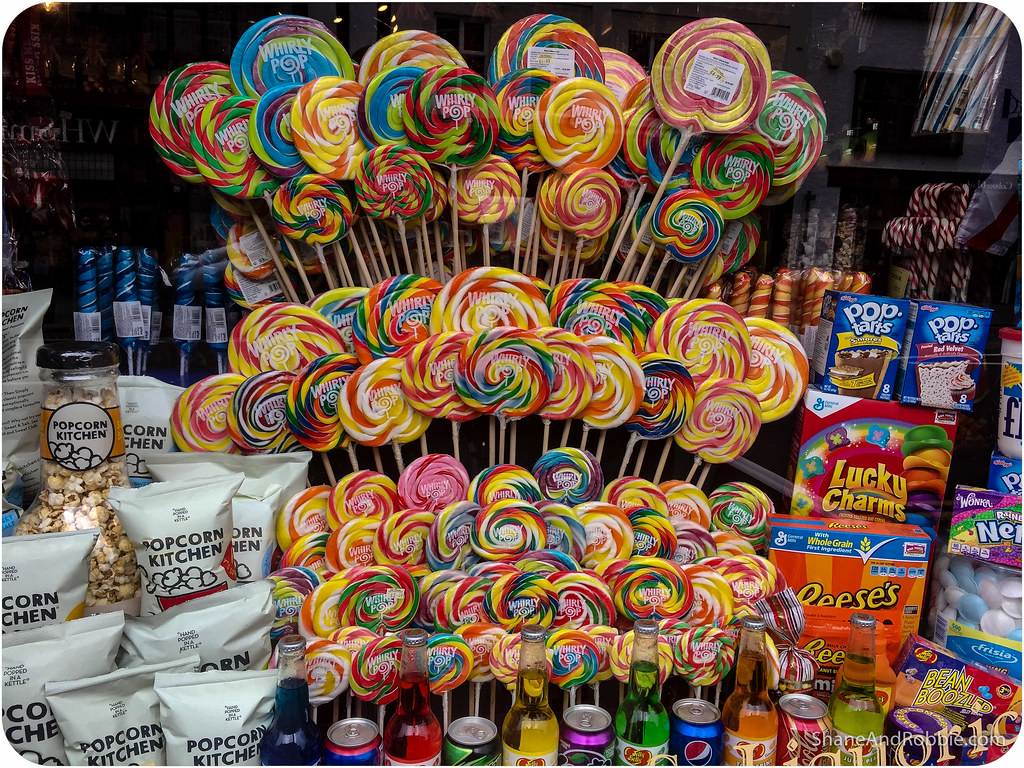 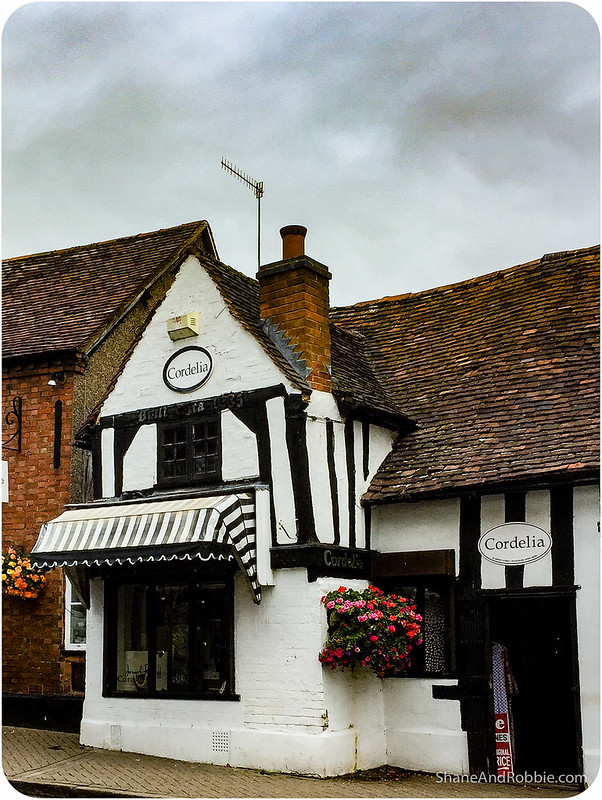 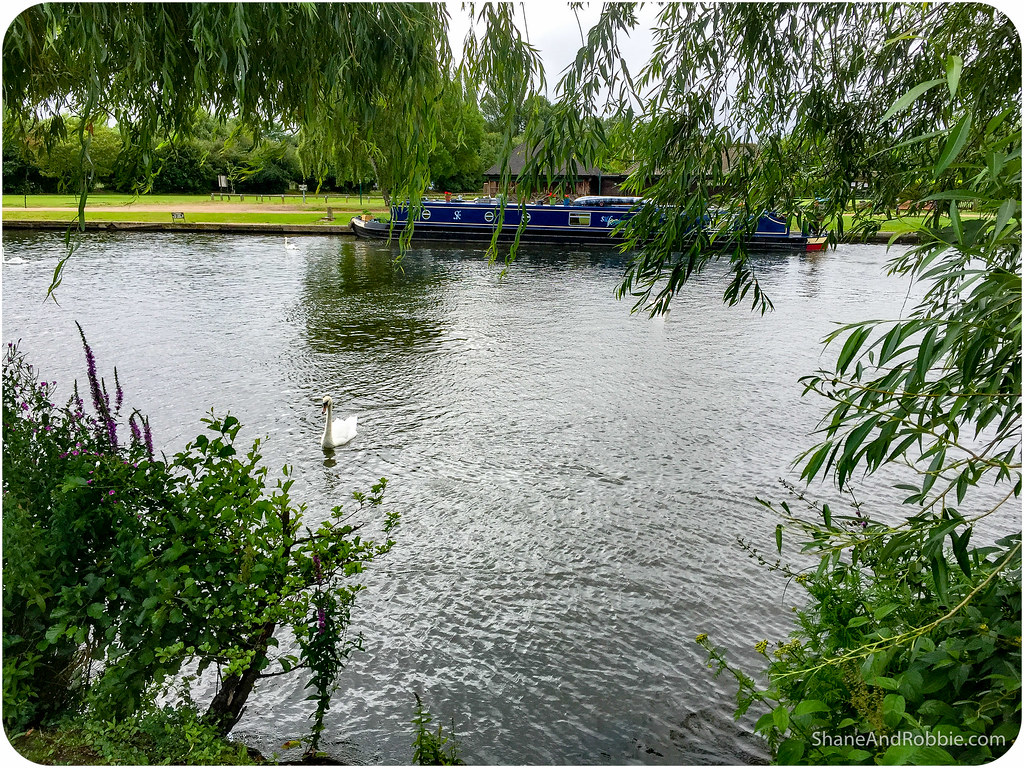 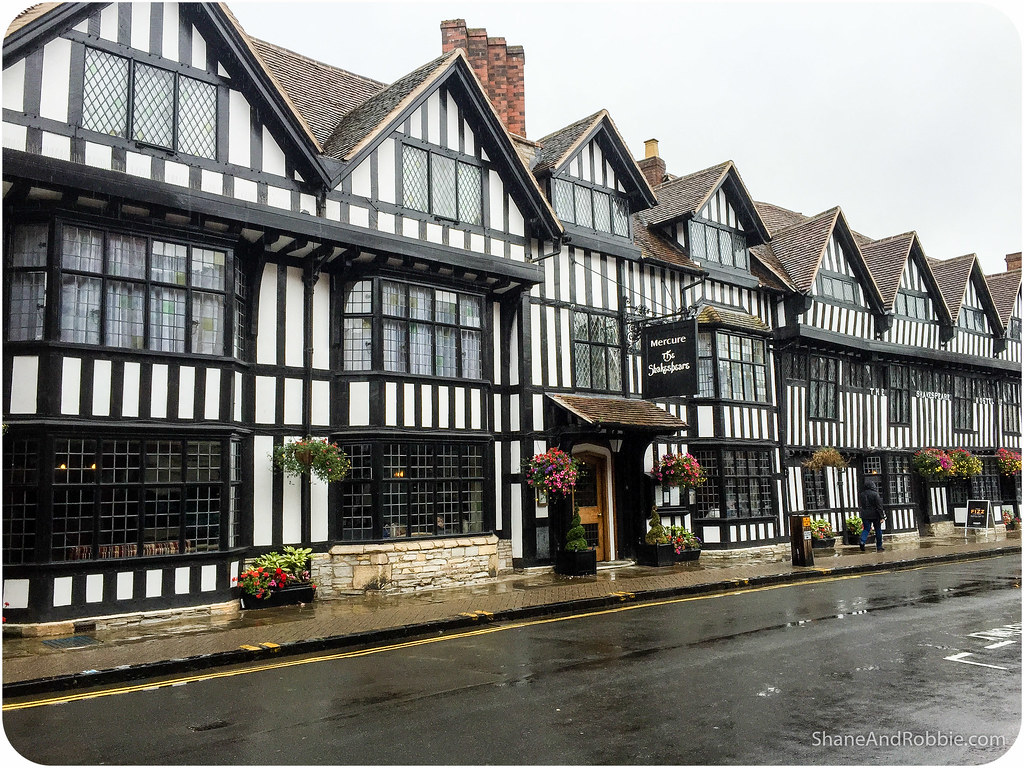 Aside from the Shakespeare-related things, and the pretty countryside, there isn’t too much to see here so we’ve decided to make this a short stop and continue on tomorrow. For now though it’s time to seek out some dinner and celebrate my Mum’s birthday on her behalf in Stratford-Upon-Avon. Happy Birthday Mum! 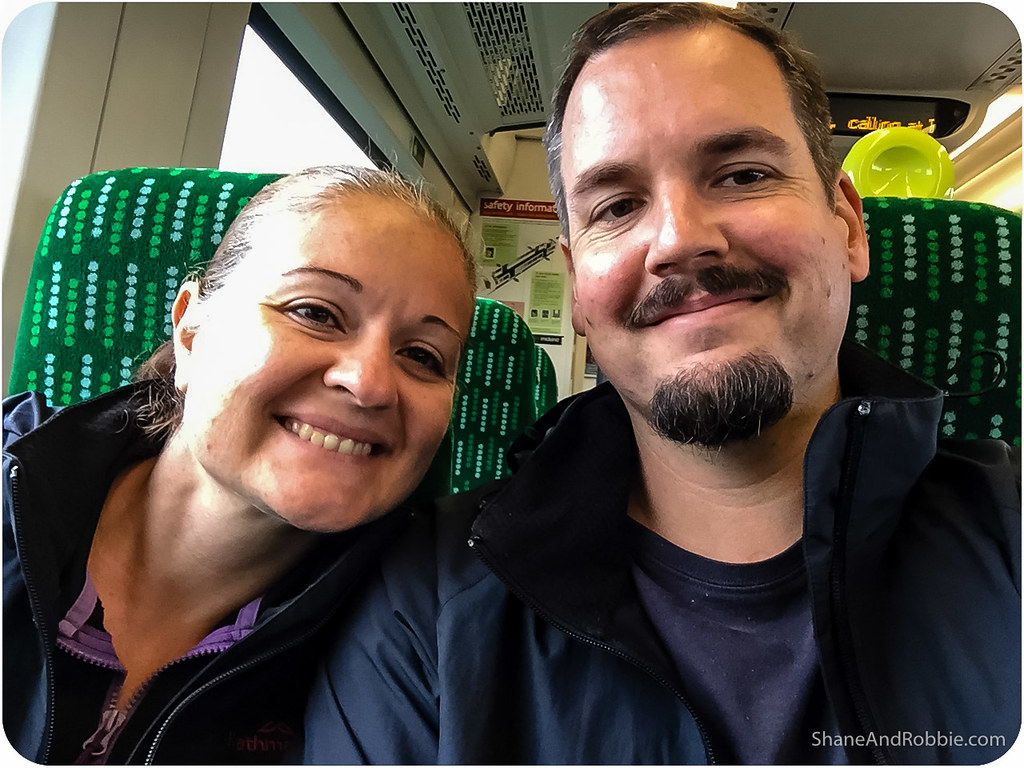