We spent our day exploring Westminster and all its historic landmarks, including the Palace of Westminster, Buckingham Palace, Westminster Abbey and Westminster Cathedral. Situated on the north bank of the River Thames, just across from Southbank and the London Eye, Westminster is London’s “official” heart, where the UK government meets, the British Prime Minister resides, and the Royal Family lives. It’s also a part of the city that’s VERY popular with tourists, as we discovered today; the queues for Buckingham Palace and Westminster Abbey in particular were quite extraordinary! We persevered through the long lines however and got to see some of London’s bets known sights up close. 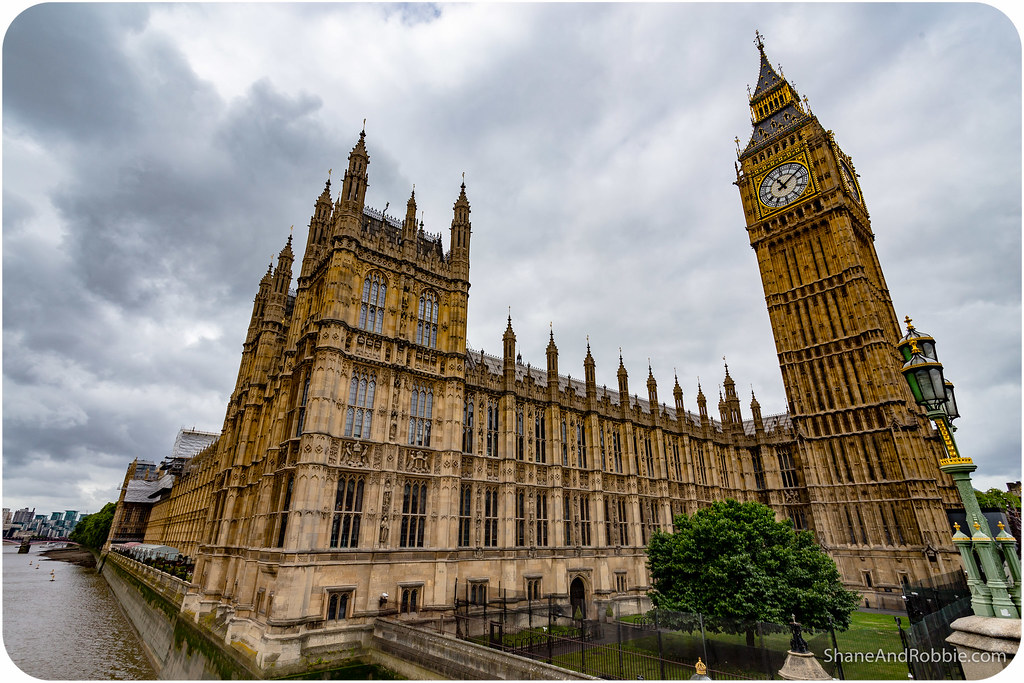 Our first stop of the day was the Palace of Westminster, better known as the meeting place of the British Parliament. This beautiful building was originally built as a royal residence but has been home to the House of Commons and the House of Lords, the two houses of the Parliament of the United Kingdom, since the 13th century. 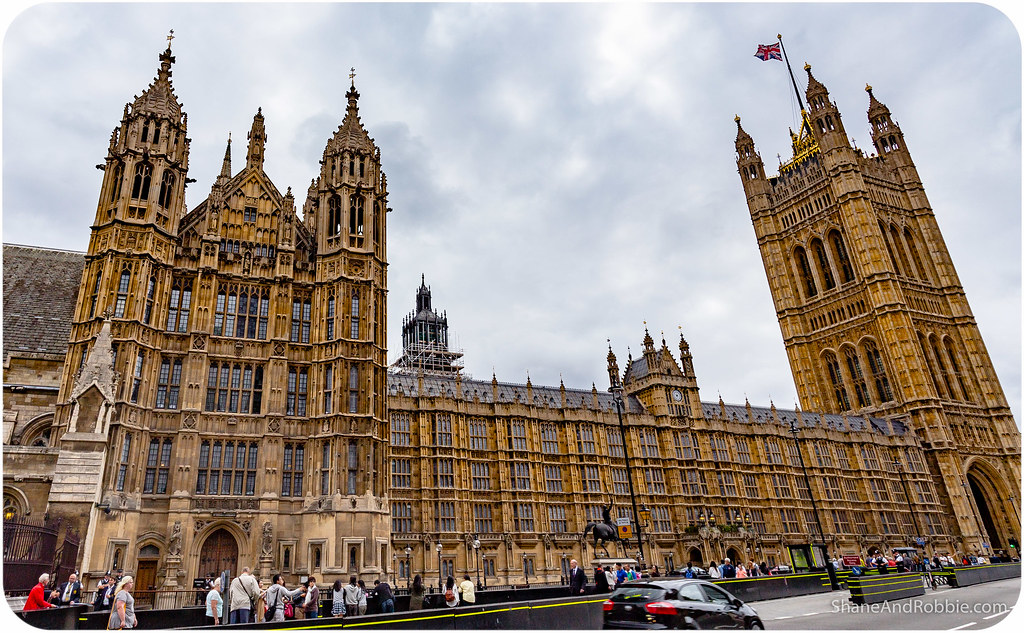 The first royal palace was built on the site in the 11th century, and Westminster was the primary residence of the Kings of England until a fire destroyed much of the complex in 1512. After that, it served exclusively as the home of the Parliament of England and the Royal Courts of Justice. In 1834, an even greater fire ravaged the building, and the only medieval structures to survive were Westminster Hall, the Cloisters of St Stephen’s, the Chapel of St Mary Undercroft, and the Jewel Tower (which you can see in the photo below). 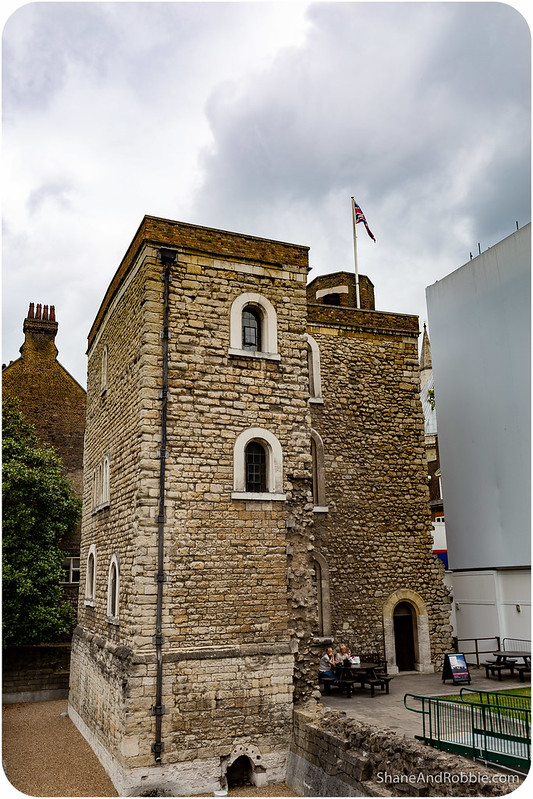 In the subsequent reconstruction the Palace was rebuilt in the Gothic Revival style, inspired by the Gothic style of the 14th to 16th centuries. With its ornate trimmings, and many spires and towers, the building is far prettier up close than we had expected. It’s also HUGE (apparently there are more than 1,000 rooms inside – not that we were allowed in to see them). 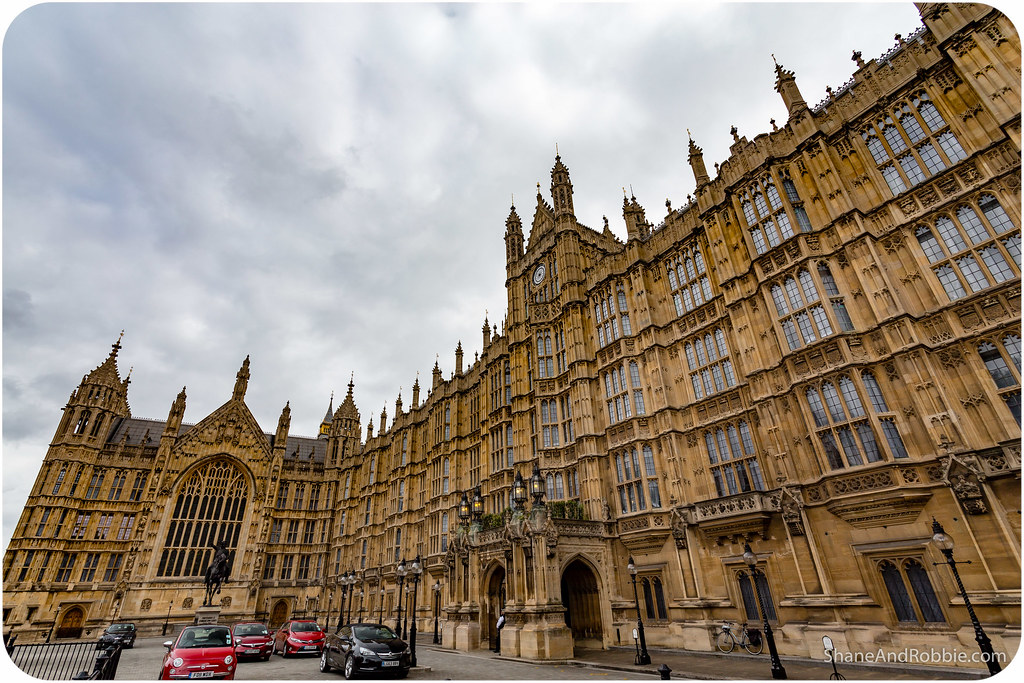 The building’s best known feature is, of course, the Elizabeth Tower, better known as the Tower of Big Ben*. With a clock face on each of its four side, this iconic London landmark (how many of those can one city have?!) is visible from miles around and the ringing of its bells can be heard all over the city. That sound has become inextricably tied to our memories of London and is as iconic in many ways as the tower itself. You can do tours through the tower and find out all about the clock and its bells and how they are kept on time; with so much more to see however, we decided to keep moving and made our way across the road to another of London’s world famous landmarks: Westminster Abbey.

*Big Ben is technically just the nickname of the biggest bell within the clock tower. The bell was named after Benjamin Hall, the 19th century engineer who oversaw the rebuilding of the palace of Parliament after the 1834 fire. 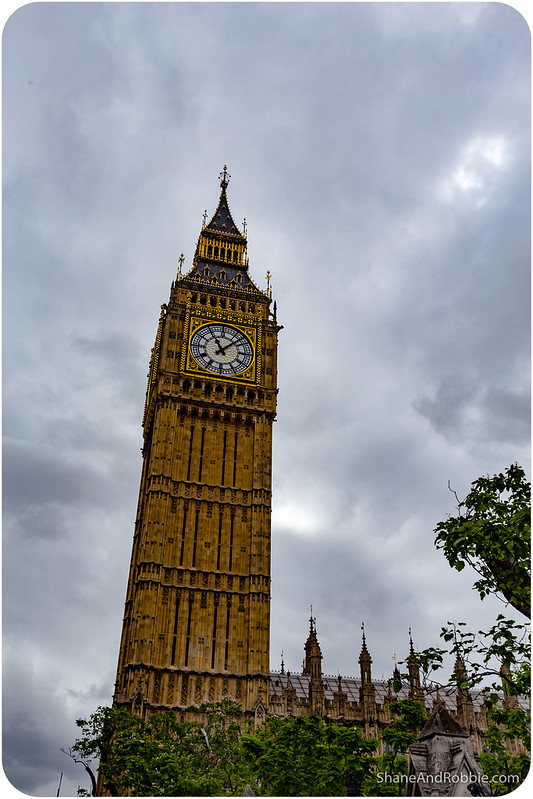 Westminster Abbey is the church where British monarchs are crowned, get married, baptise their babies, and have their funerals. In that sense, just about everyone in the world has seen Westminster Abbey, even if just in passing on TV; most recently it was the focus of the world’s media when Prince William and Kate got married there. We’re not much for royal weddings (*yawn*), but the architecture of the building is pretty cool. There has been a church on the site since the 7th century, and the present church was built in 1265. As is typical of many churches and cathedrals in the UK, you can’t take photos of the interior, but trust us: in keeping with the other Gothic churches we’ve seen around England (e.g. York Minster, Cathedral of Durham), Westminster Abbey is quite spectacular (the queues to get INTO the abbey are less than spectacular however – a tip for anyone visiting London: pre-buy your tickets online to save literally HOURS of waiting and queuing, and save a few pounds too). 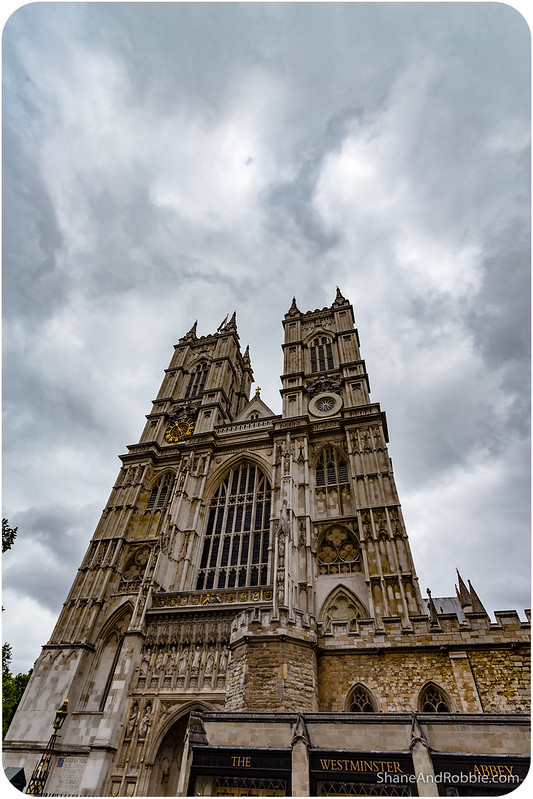 Having seen 2 of the big 3 sights (the third being Buckingham Palace), we needed a break from the crowds (sweet Jesus – THE PEOPLE!*), and so pulled into a quiet café for a bite to eat and some respite.

*We keep carrying on about crowds and how many people there are here (and in China, and in the big cities of Japan, etc), but you have to understand it’s because we come from a country where there’s LOTS of space and not a whole lot of people. This means we’re just not used to sharing our air and personal space with thousands of other people! 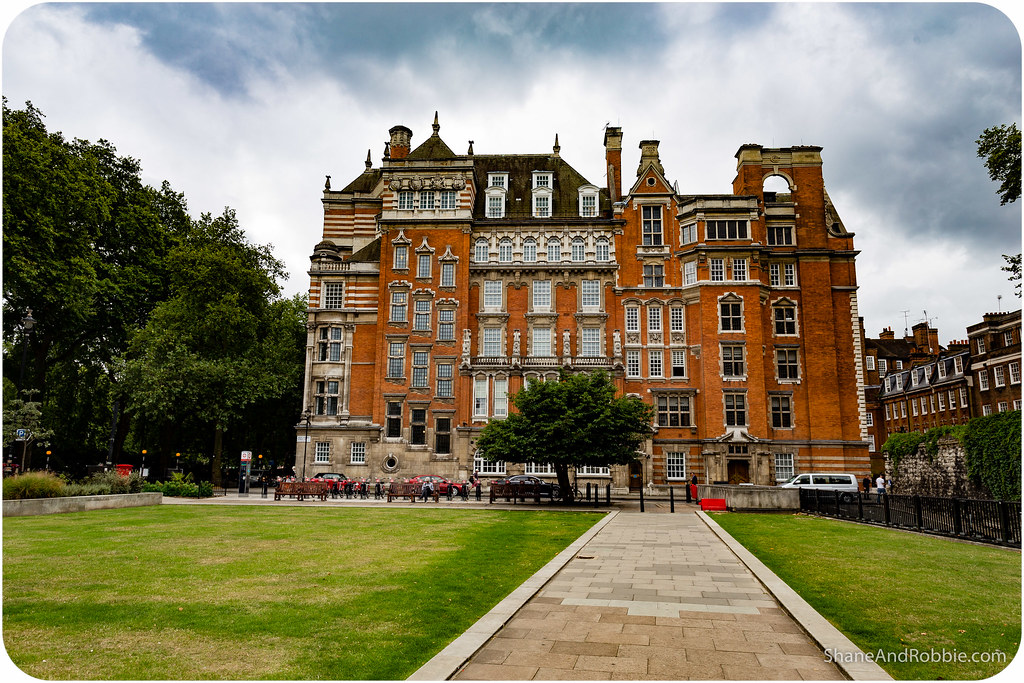 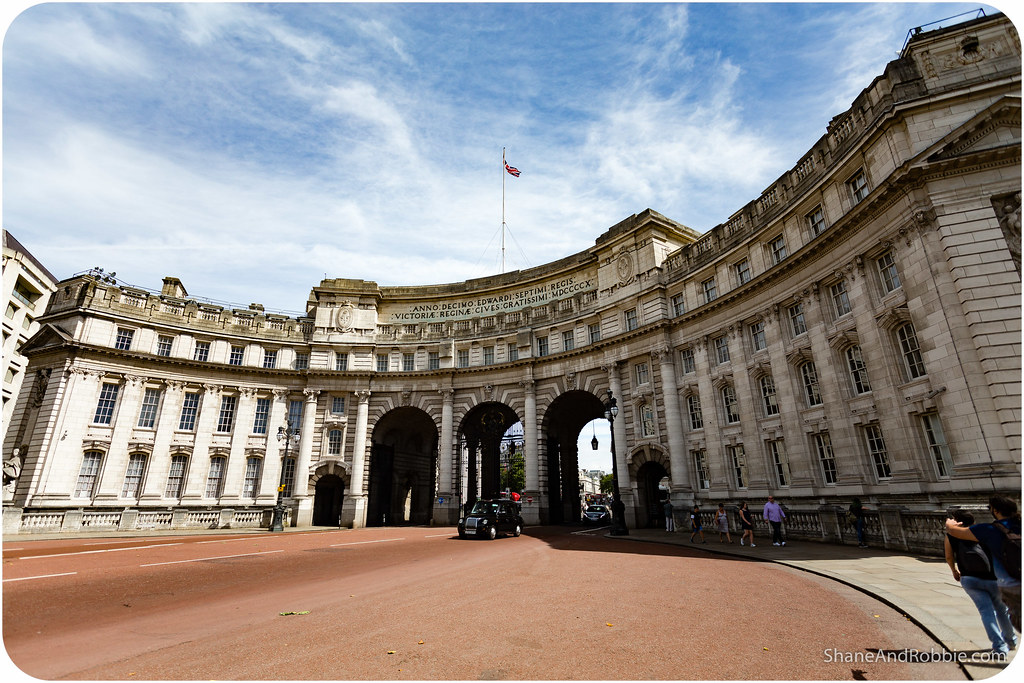 Continuing on through Westminster we passed a number of government ministry buildings and beautiful architecture. 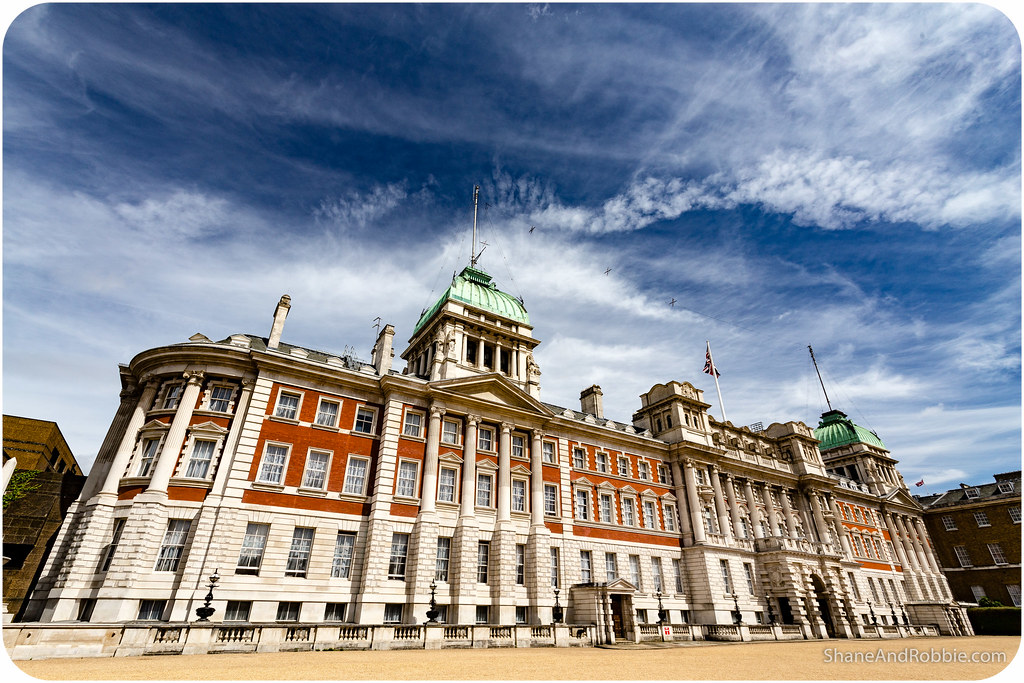 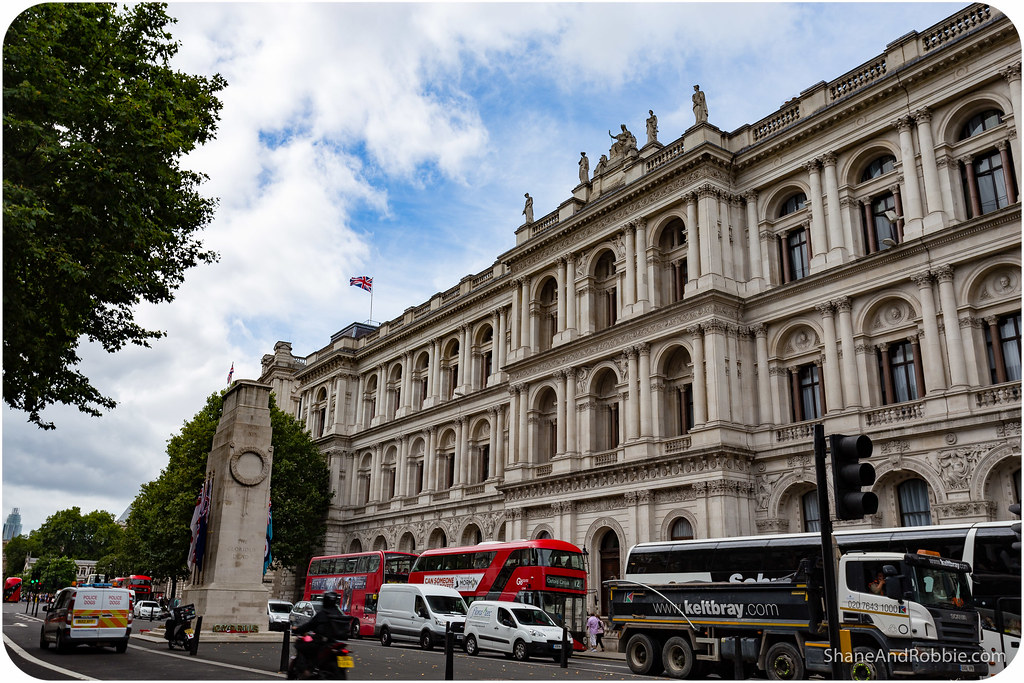 One of the buildings we passed, known colloquially as “Number 10”, is the British Prime Minister’s abode. For over 300 years British Prime Ministers have resided at Number 10 Downing Street and conducted business there. Not that we got even close to seeing the actual house as virtually the entire street is blocked off with big security fences, patrolled by armed gaurds*.

*As a result of current affairs in Syria and other parts of the Middle East, key sites in London are currently at a Level 4 (out of 5) for terrorism threats. The most obvious sign of this we’ve seen whilst here is the level of security in certain places. 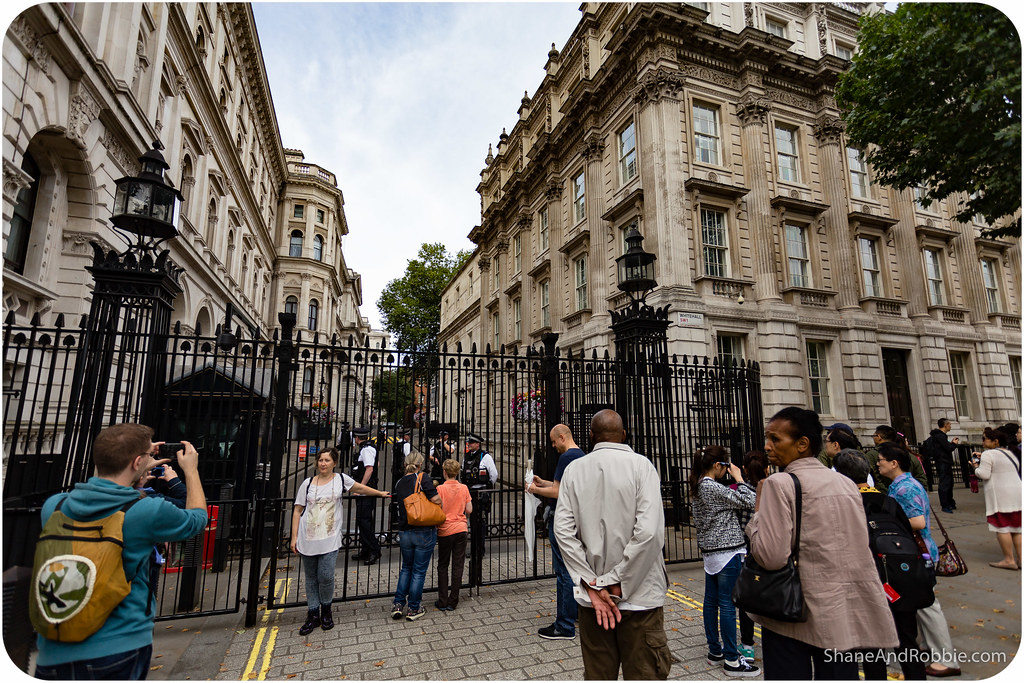 Further on we entered St James’s Park, one of the many parks in this part of London. Once part of the grounds of St James’ Palace, this 57 acre green space is now a leafy retreat from the hustle and bustle of Westminster and made for a pleasant stop along our wanderings. 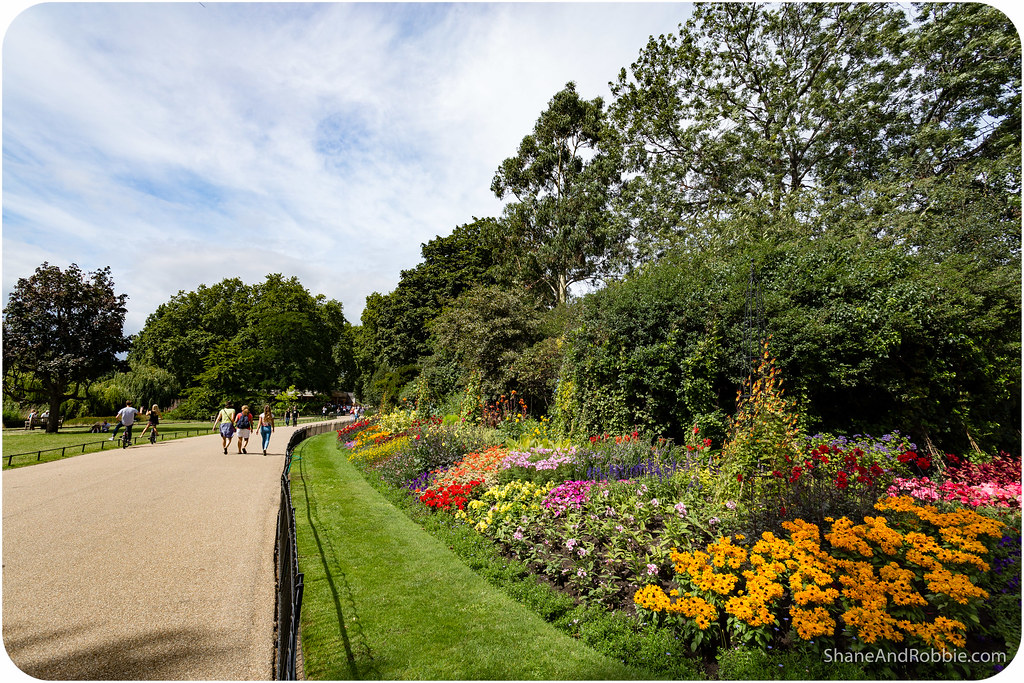 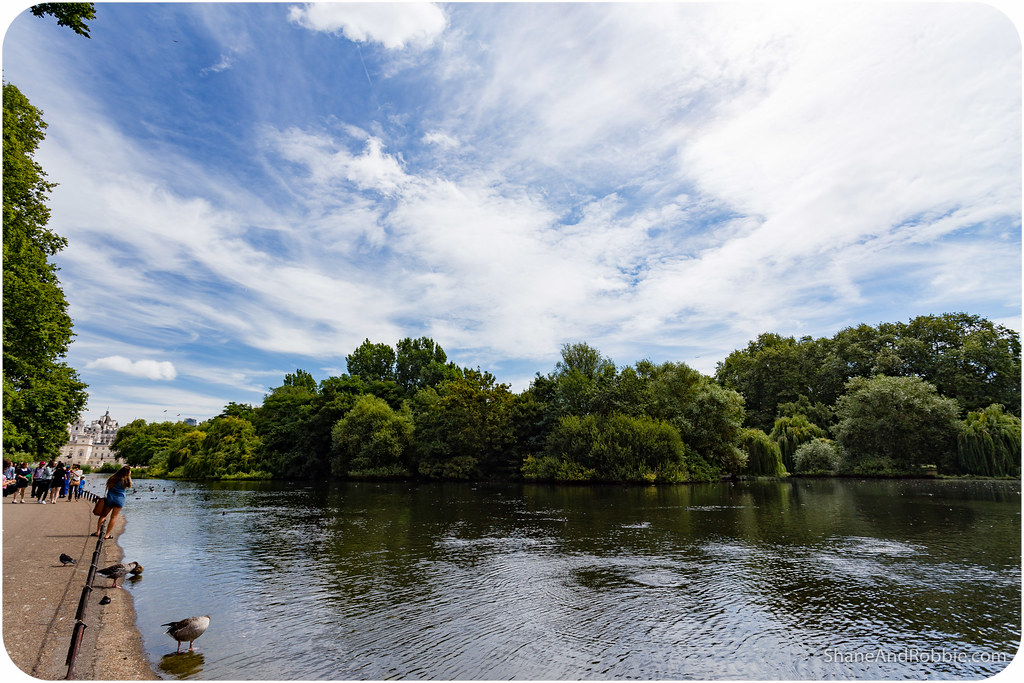 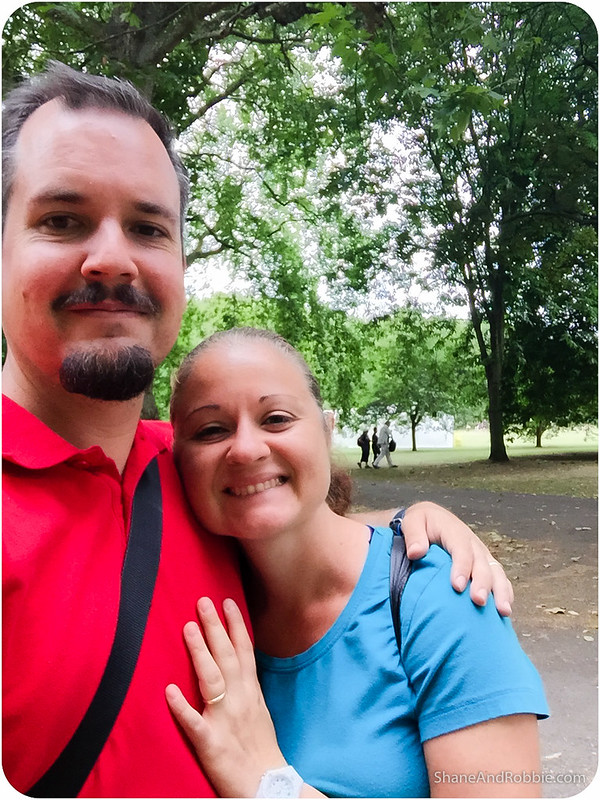 We crossed St James Park on our way to our final site for the day: Buckingham Palace. This huge palace is the official London residence and principal workplace of the monarchy of the United Kingdom. Like Kensington Palace, which we visited the other day, parts of Buckingham Palace are open to the public over summer when the royals are off on their holidays. Once again the queue to get in was RIDICULOUS, and once again, no photos allowed inside. Using your imagination you can no doubt picture the opulence of the staterooms however… 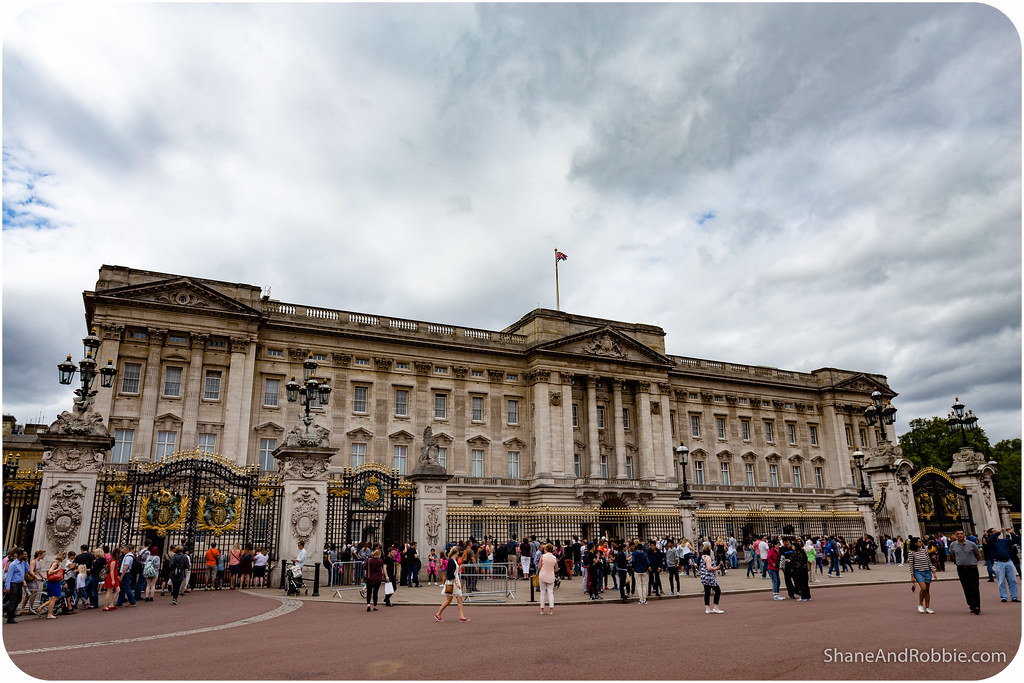 Originally known as Buckingham House, the building which forms the core of today’s palace was once a townhouse built for the Duke of Buckingham in 1703. It was subsequently acquired by King George III in 1761 as a private residence for Queen Charlotte and was known as “The Queen’s House”. During the 19th century it was enlarged, and became the official royal palace of the British monarch on the accession of Queen Victoria in 1837. A monument to Queen Victoria now stands out the front of the palace. 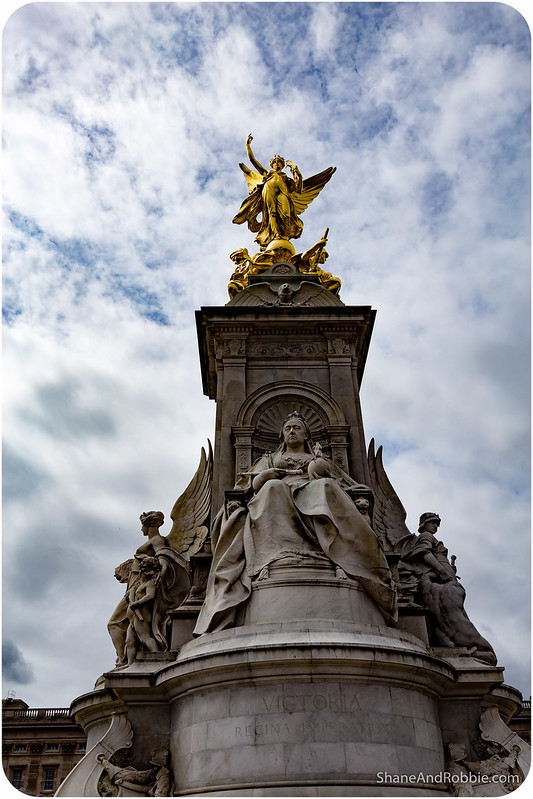 After trawling through the halls of Buckingham Palace with a million other tourists we decided we’d had enough of being good little sheepeople* and headed back to our little studio apartment for some peace and quiet. London really is an awesome city, and there is so much to see and do here, but the crowds of tourists we encountered today make us think that maybe high summer is NOT the time to come here!