Carcassonne is a small provincial town in South-Western France, close to the border with Spain. Many of the people in this unassuming city of 50,000 inhabitants are employed at the large shoe factory that sits on the outskirts of town; the rest work in the tourism industry, catering to the 4 million visitors that flock here each year to see the famous Cité de Carcassonne. This magnificent Medieval fortress is France’s 2nd most visited tourist site (after the Tour Eiffel), and with good reason. La Cité de Carcassonne is by far one of the most extraordinary citadels we have ever seen.

The Medieval walled town of Carcassonne (known now La Cité de Carcassonne) looks like the magical castle out of a fairytale. Its high stone walls wrap around the rocky top of the hill, protecting the town within as they have done 2,000 years. 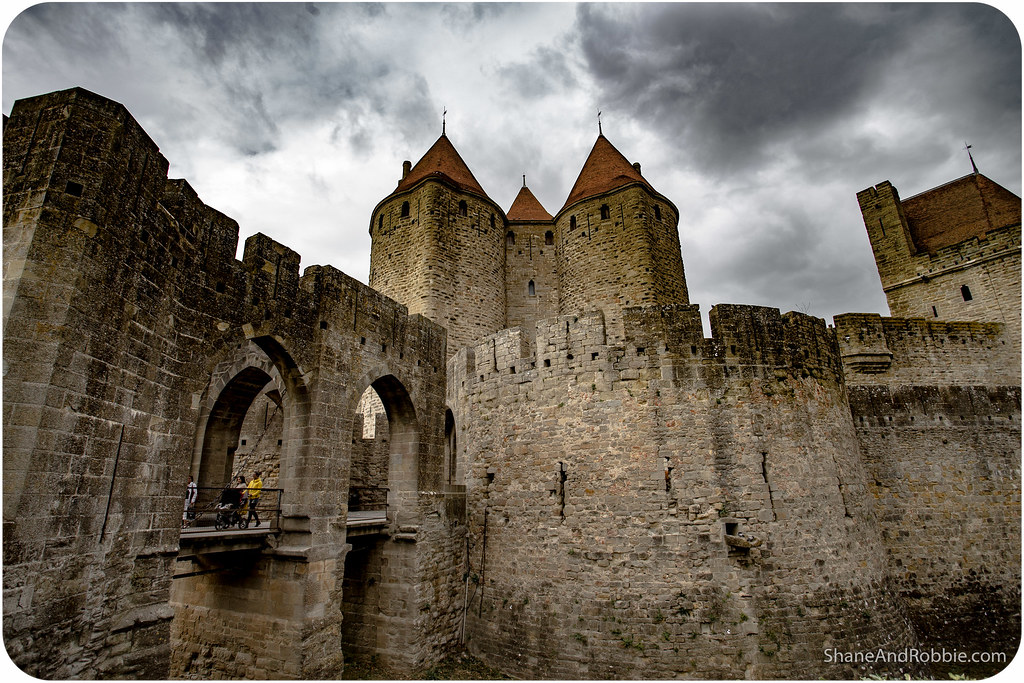 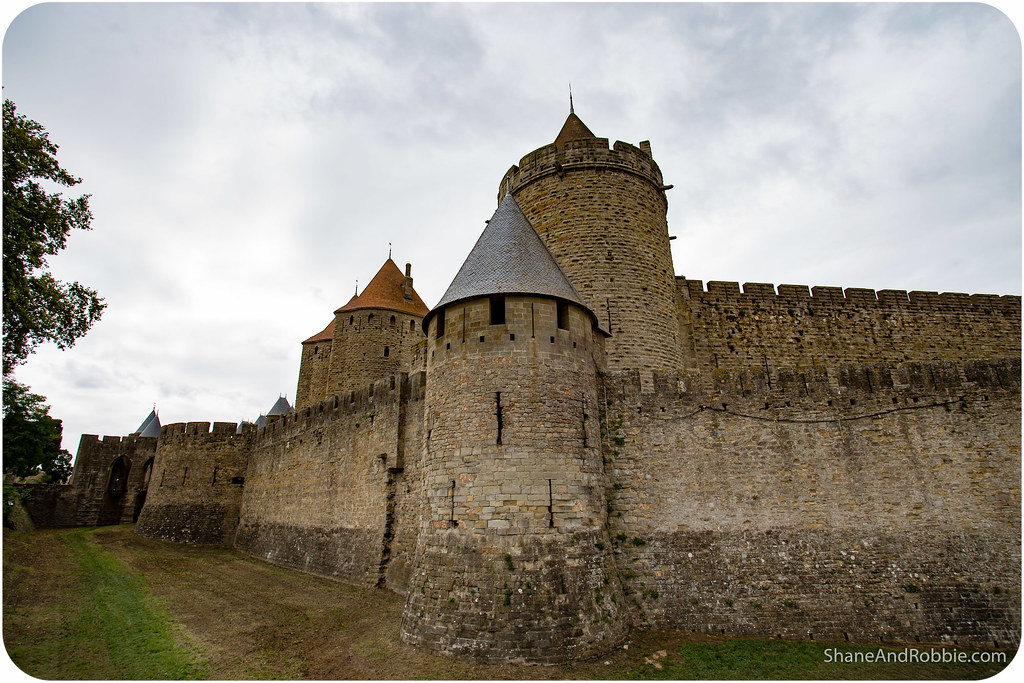 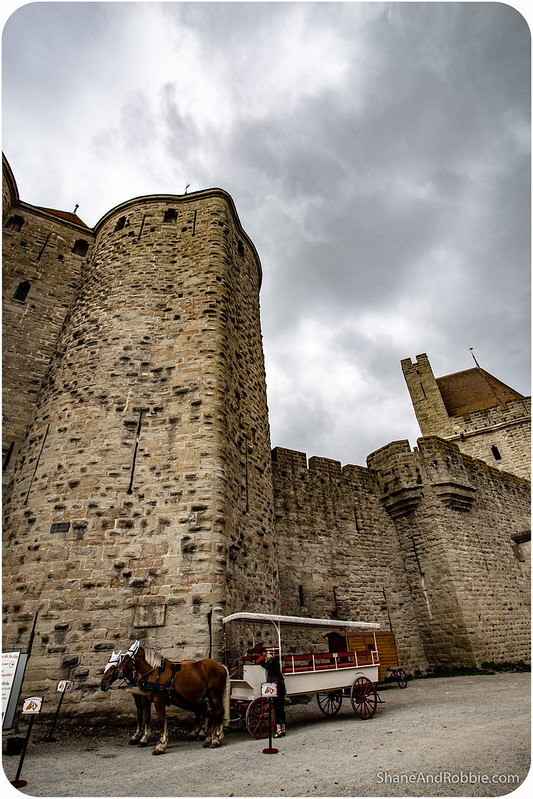 The Romans laid the first stones that still today form part of the walls of Carcassonne. The city was, in its time, possessed by the Romans, Visigoths, Saracens, Crusaders, and French. The town was annexed to the kingdom of France in 1247AD and, for many years, was the major fortified town securing the border between France and the Kingdom of Aragon (now part of Spain). 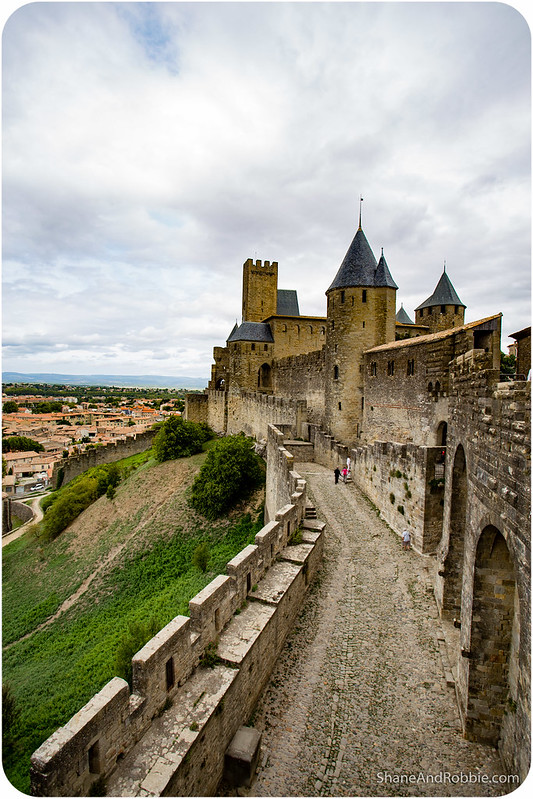 Each successive occupant of the city added to its fortifications, the end result being a town encases in a concentric design of 2 outer walls, 2 moats, 52 guard towers, and barbicans to prevent attack by siege engines. The impressive fortifications, visible from far off in the Languedoc-Roussillon countryside, extend over a total length of 3km. Unsurprisingly, this highly fortified town survived numerous sieges and battles over the centuries. 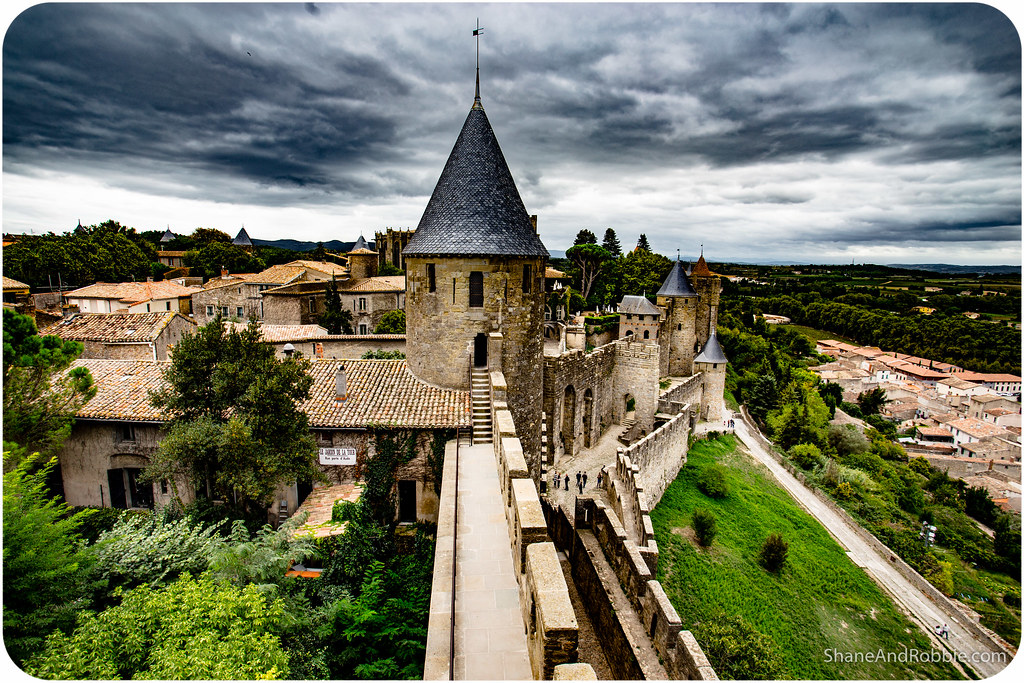 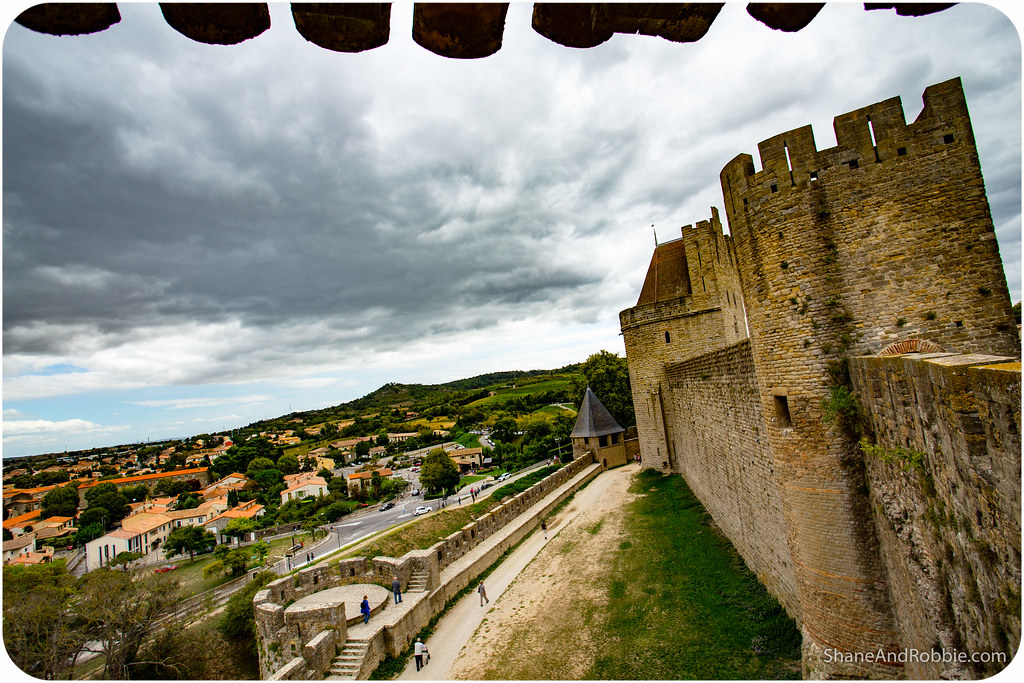 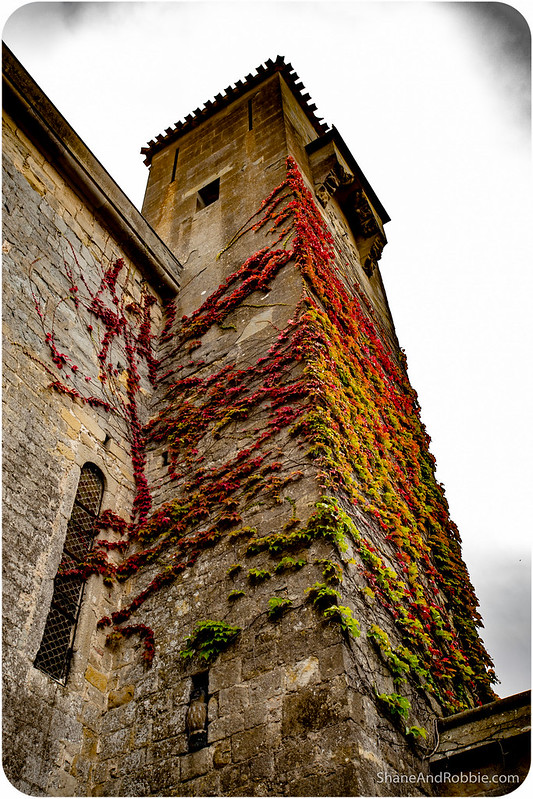 Central to the town is Château Comtal – the Count’s Castle. As strongly built as the rest of the town, this castle is more fortress than palace, with its high walls and narrow, arrow-slits for windows. For further protection the castle itself has its own drawbridge and ditch leading to a central keep. 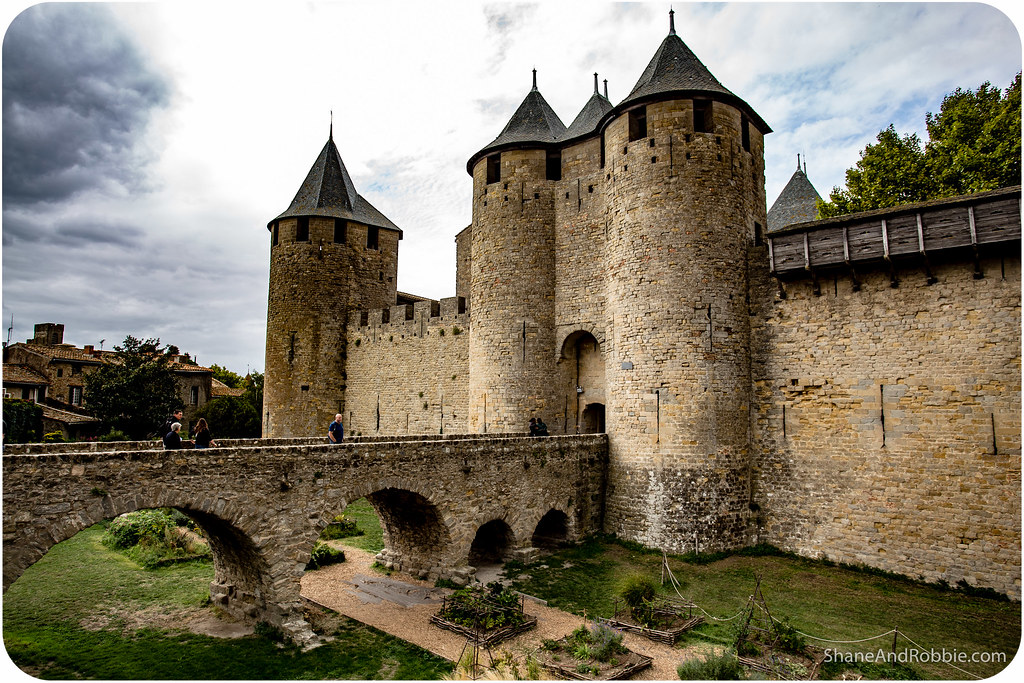 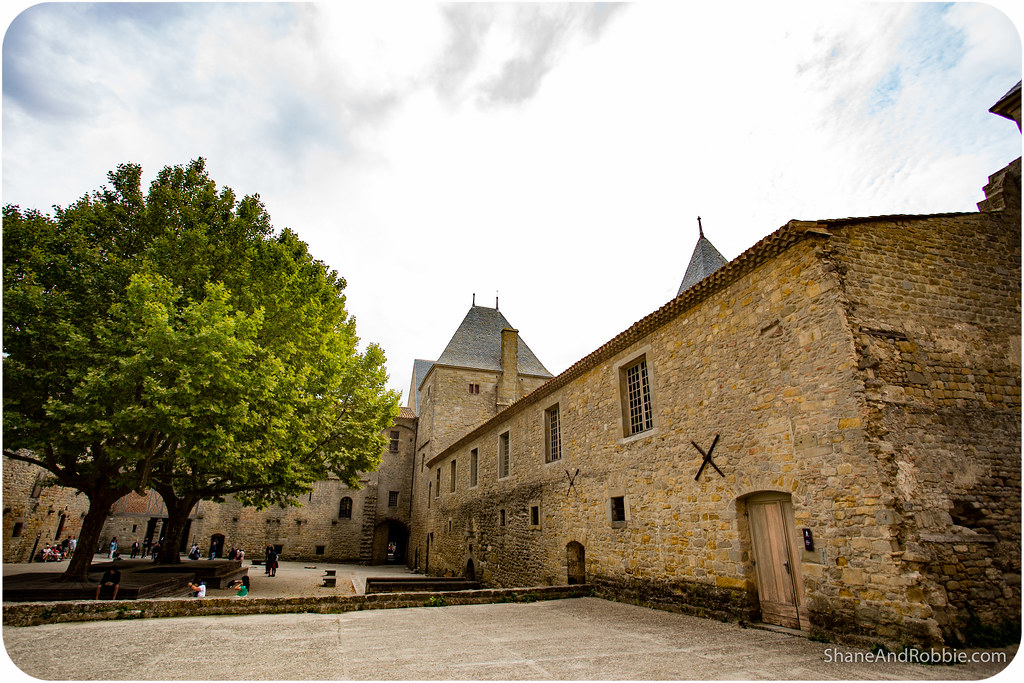 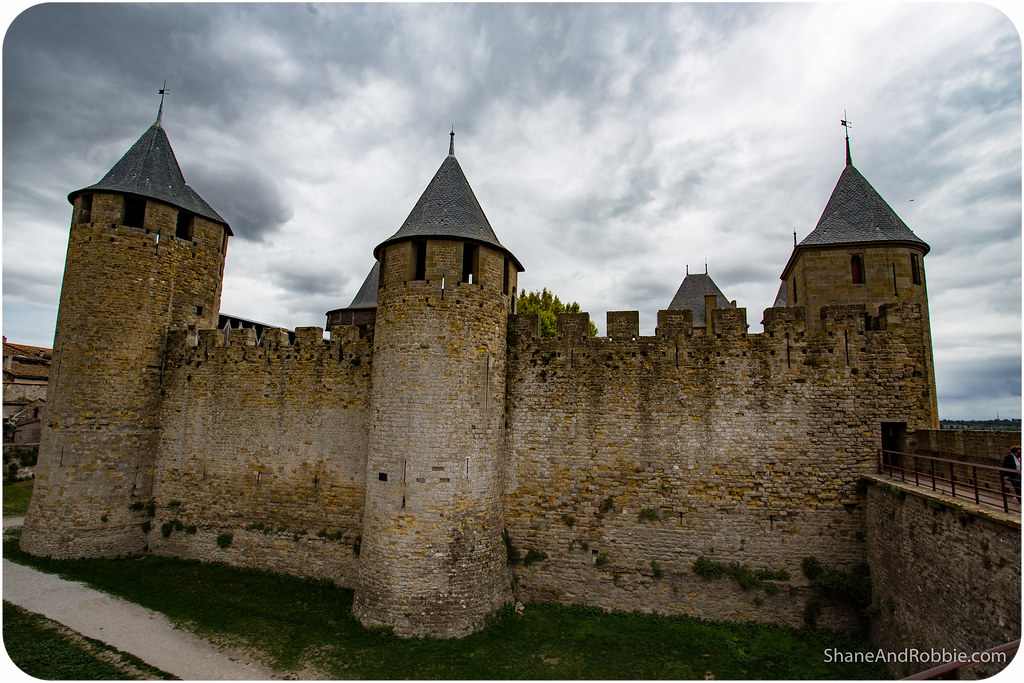 We spent a happy couple of hours walking through the castle and along its ramparts, marvelling at the views of the town and surrounding countryside afforded by the elevated position. 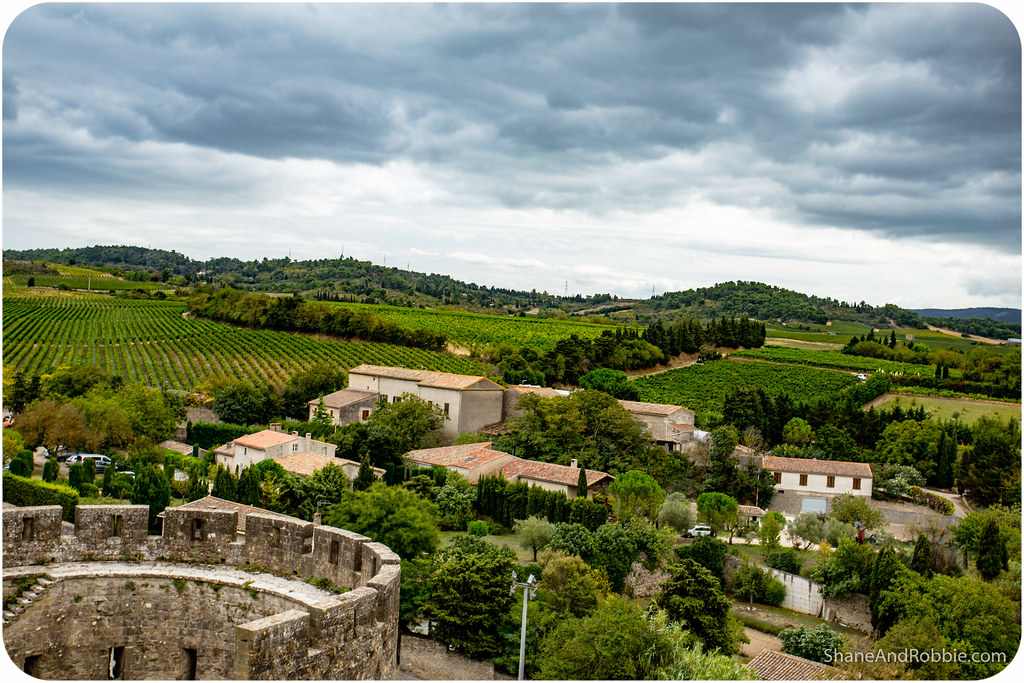 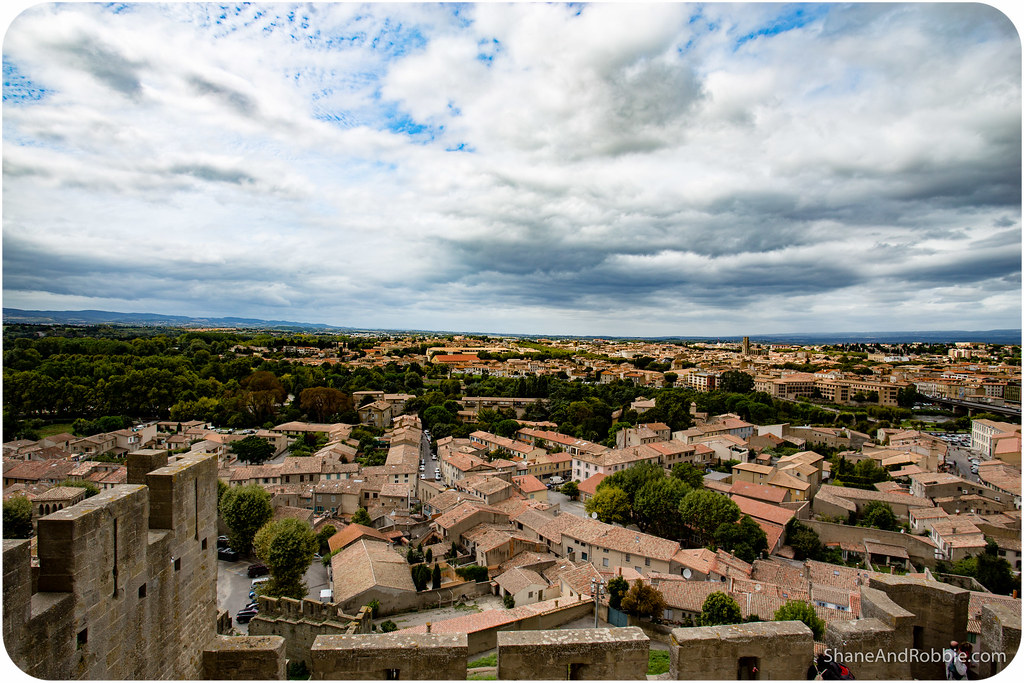 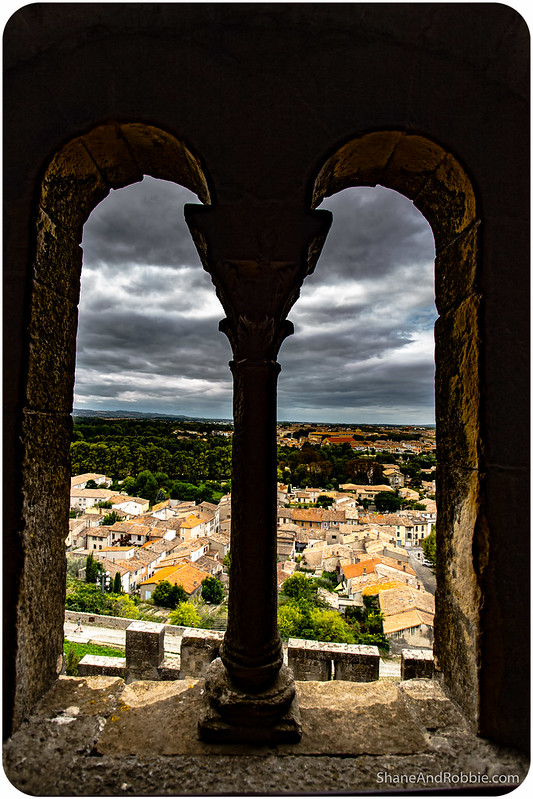 Within the city’s walls we stopped in to see the town’s Gothic basilica of Saint Nazaire, and admire the many narrow cobbled lanes and alleys. No wonder the town was added to UNESCO’s list of World Heritage Sites in 1997. 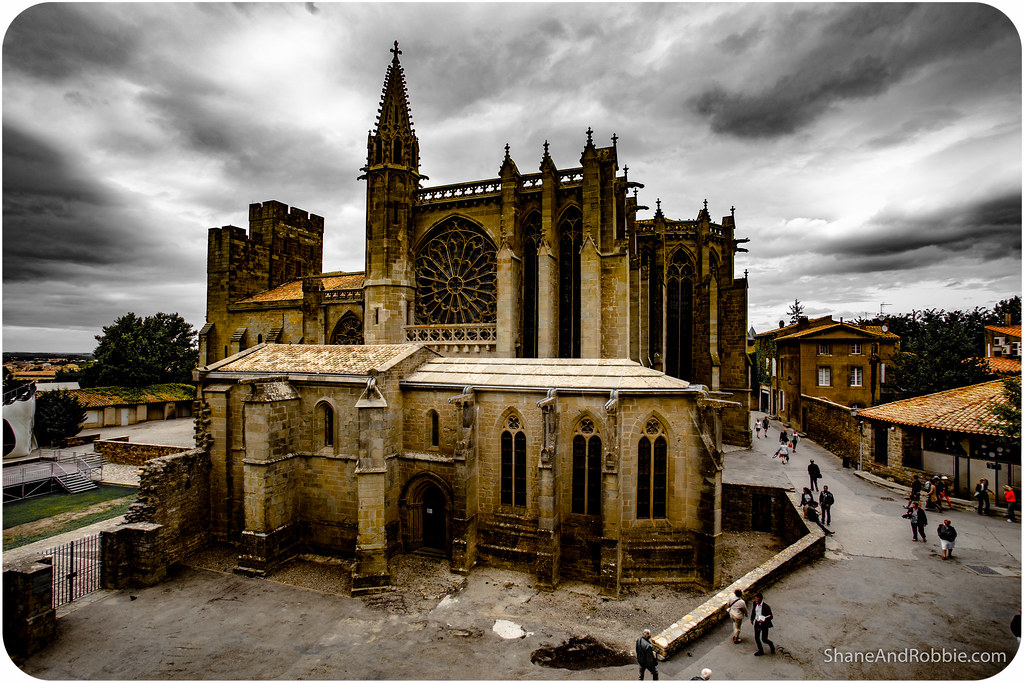 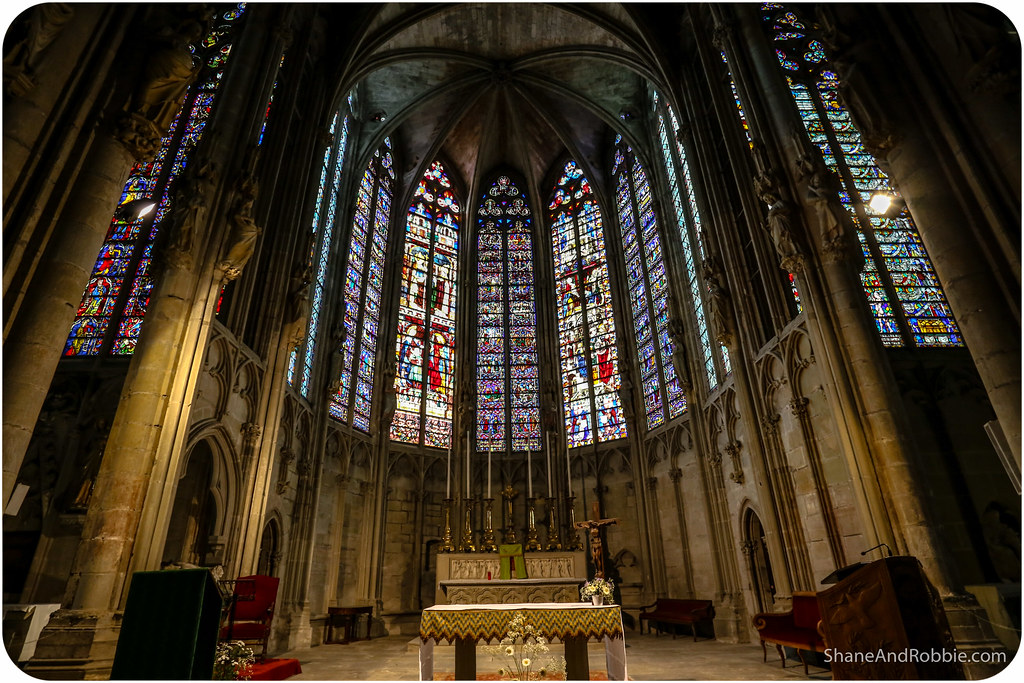 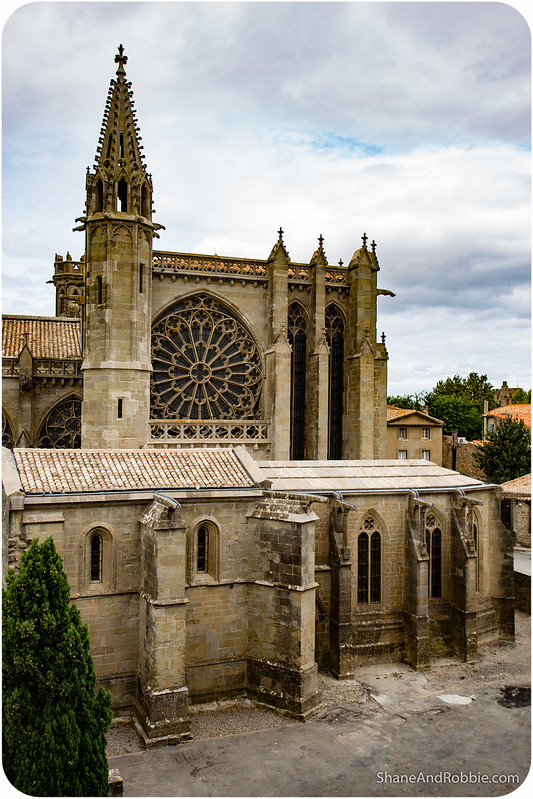 When peace came to this part of the world the old Cité de Carcassonne fell into disrepair; by 1849 it was slated to be demolished. Fortunately the then town mayor organised a monumental effort to rebuild and preserve the citadel and the oldest part of Carcassonne was saved. Restorations took almost 50 years, but when they were finally finished in 1910, Carcassonne was once again on the map. This time, however, it was the tourists that came to invade the town. 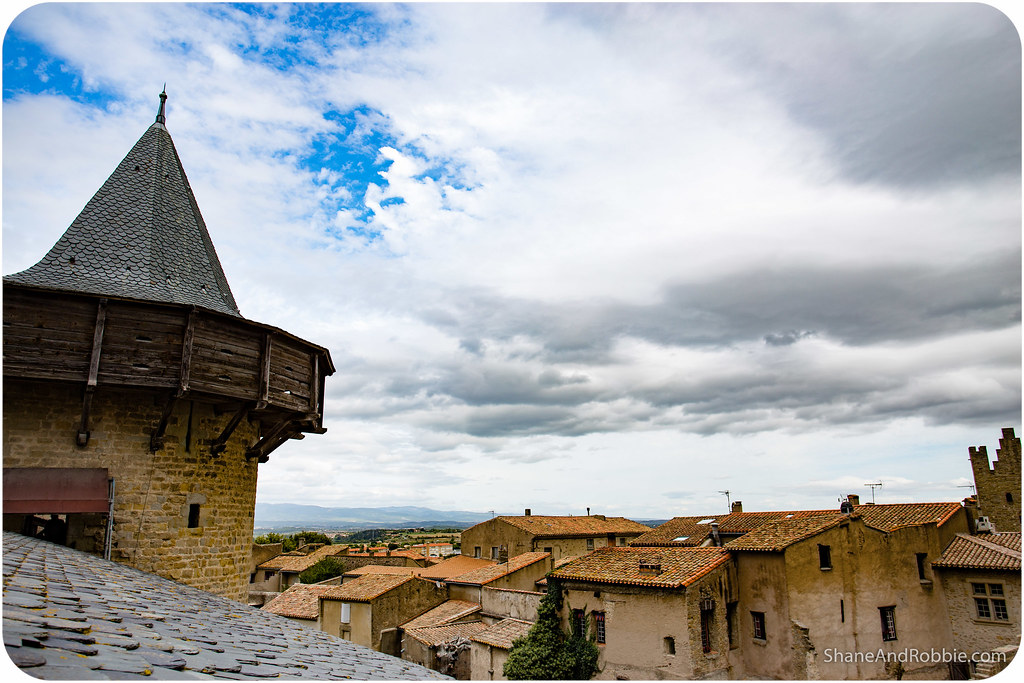 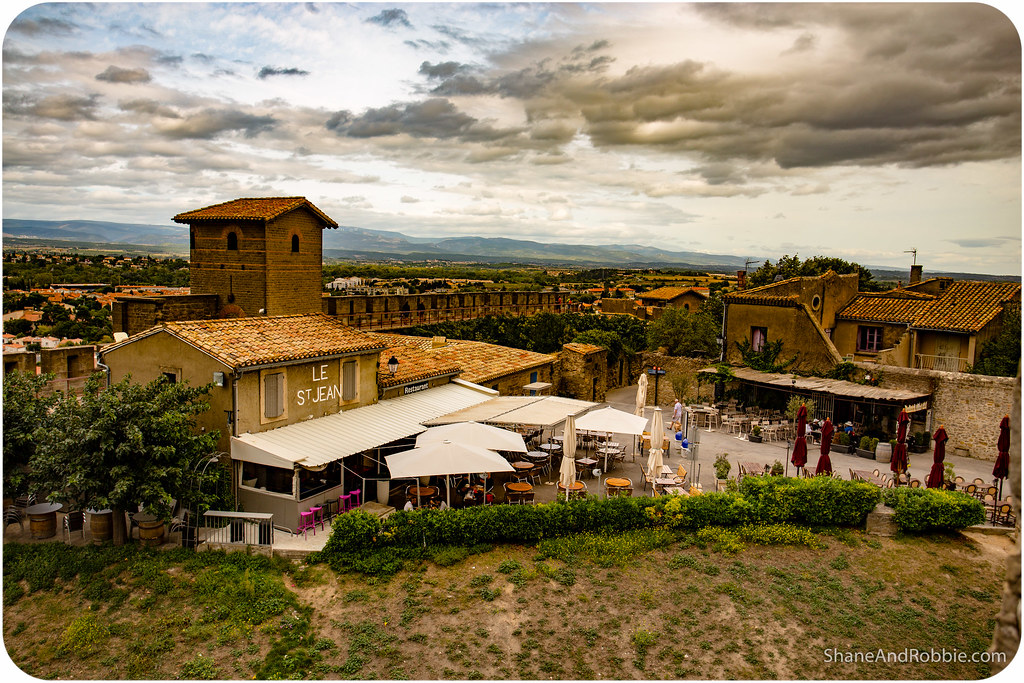 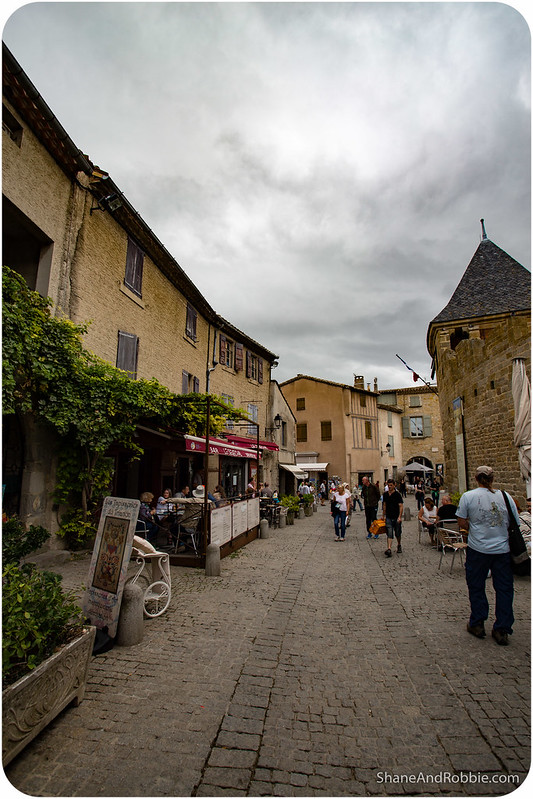 The sheer number of tourists that flock to Carcassonne is quite mind boggling. Wandering the narrow, walled streets of the Cité today, their numbers seemed overwhelming. And the magic of the old town was tarnished somewhat by the plethora of souvenir and ice cream shops catering exclusively, it seems, for those with bad taste. Luckily none of the crowds venture beyond the walls of the old town, so once we’d done our exploring and had had enough of them, we headed back down to the “new” town. 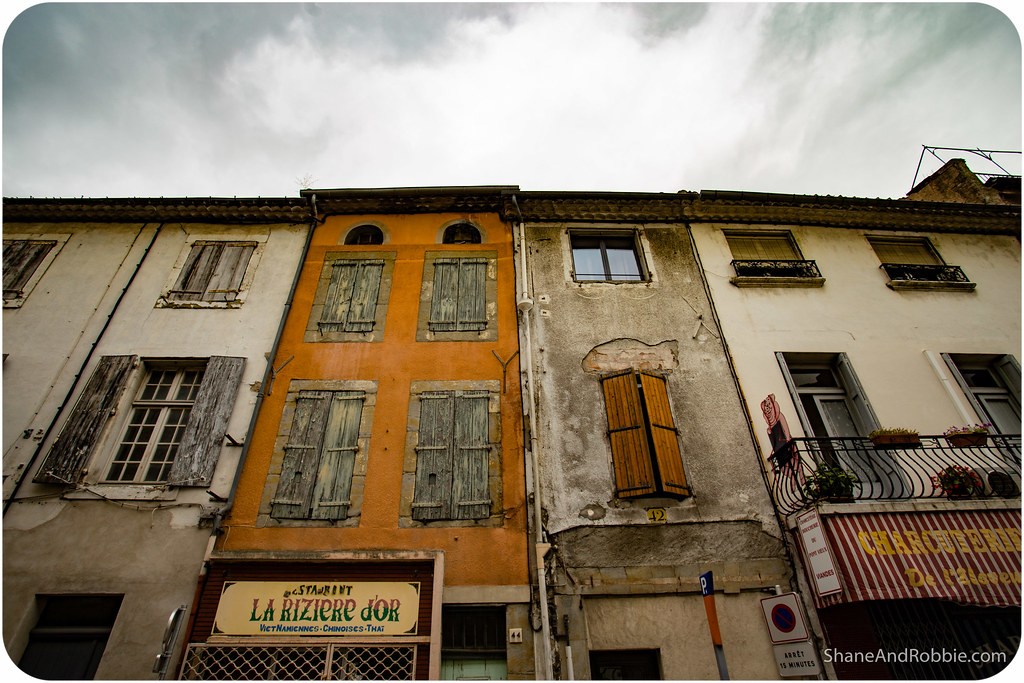 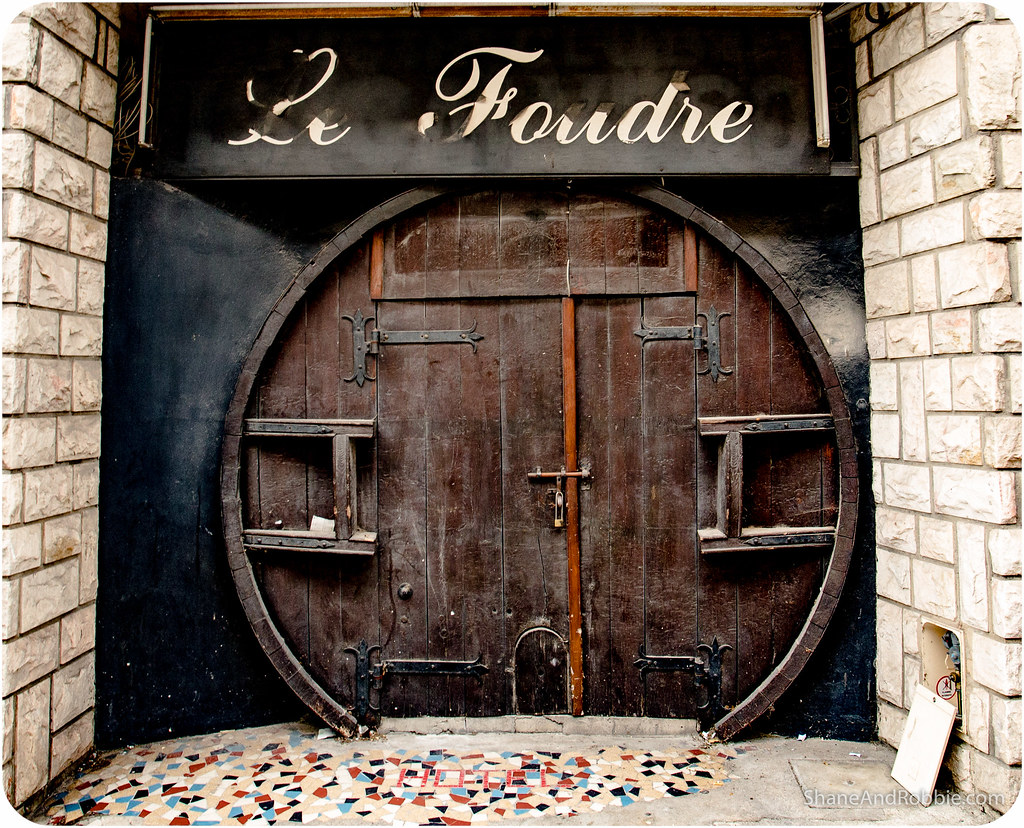 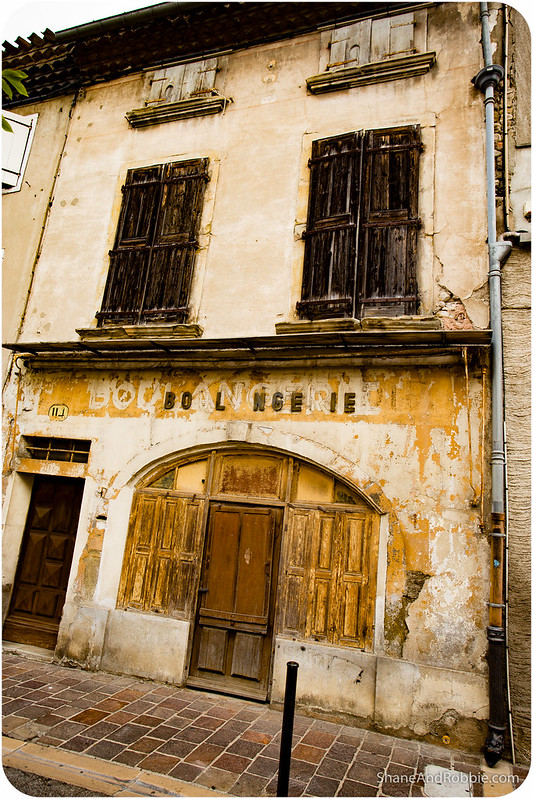 Carcassonne’s “new” town still dates back to the Middle Ages, and is interesting enough to wander through for a little while. It lacks the charm of the Cité, but at least it was quiet. We found a quiet café in the main square and enjoyed an afternoon aperitif, waiting for the sun to set and the tourists up in the old town to head home*.

*Most visitors who come to Carcassonne do so by bus, as part of large tour groups. They get disgorged here by the coach-load to wander the streets of the citadel for a few hours, before obediently get back on their buses in the late afternoon. Knowing this in advance we decided to actually spend the night in Carcassonne, keen to see the fortress without the rabble. 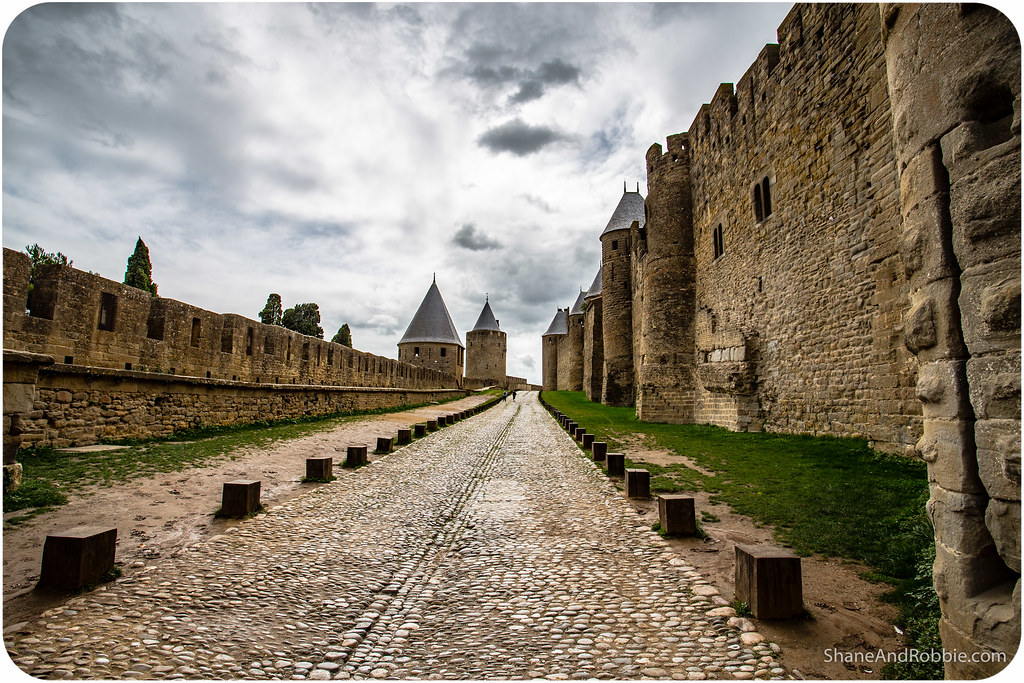 Around 7:00pm we deemed it safe to head back up to the Cité. To reach the old town we had to cross the Pont Vieux, a 600 year old bridge that connects the citadel with the new town of Carcassonne. With its graceful arches, the bridge is itself quite a wonder.

By the time we had climbed the steps and made our way back through the Gate Narbonne (one of only 2 entries into the fortified city), the place was, in fact, deserted. We got to enjoy La Cité de Carcassonne the way it’s meant to be enjoyed. It’s certainly far more magical when the crowds are gone and the tacky souvenir shops are shut. We even found a restaurant that wasn’t too touristy and enjoyed a hearty meal of traditional Languedoc-Roussillon cassoulet. Here in Carcassone, this rich, slow-cooked casserole is made with mutton or lamb, as well as the usual haricot beans. The dish even came served in the traditional earthenware cooking vessel it’s named after: the cassole.

Strolling home after dinner we got to see the magical castle illuminated; the place is even more magical when floodlit.

There’s no doubt that the Cité of Carcassonne is stunning and well worth the visit; and its history is fascinating (tied as it to the hunt for the Holy gRail, and the Knights Templar). After our visit today, however, our recommendation would be to forgo the daytime crowds and come and see it in the late afternoon and evening, when you can enjoy it rather than just “see” it. 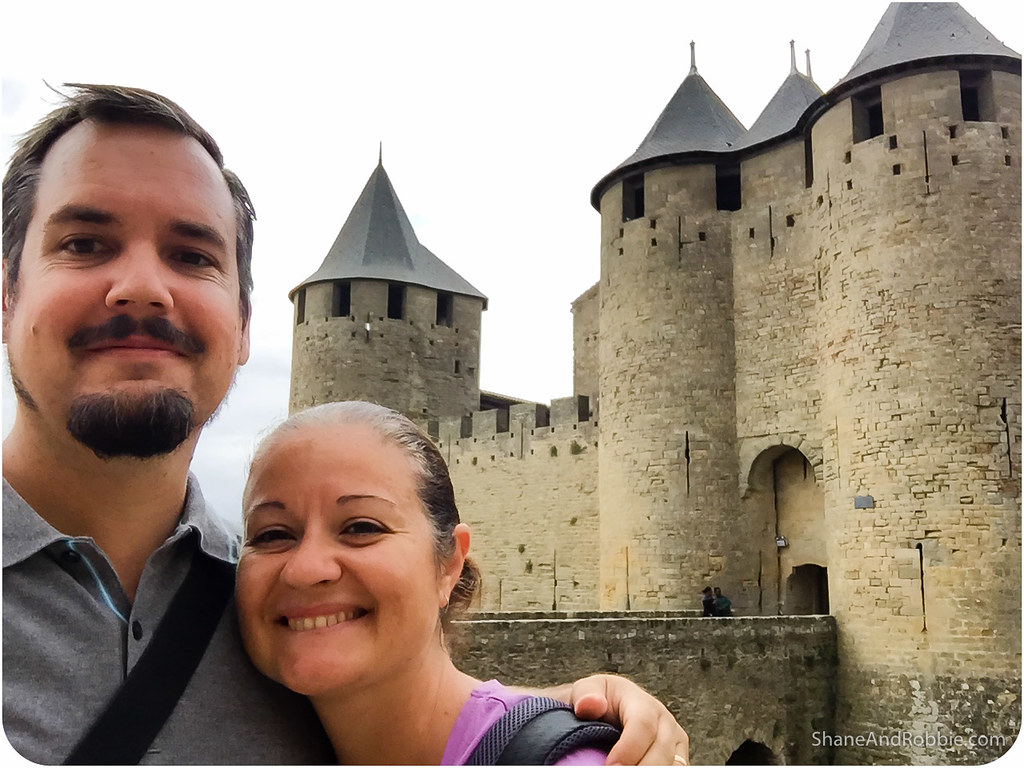