Renowned for its fine wines, Bordeaux is one of the largest cities in France and amongst its wealthiest – the city is awash with luxury brand shops, fine dining restaurants, and, of course, opportunities to buy expensive wines*. It is also, without a doubt, one of the most beautiful cities we have ever seen. With its wide boulevards, tree-lined squares, and many museums and galleries, this is one idyllic French town. We spent our day here today, exploring the city and its sights, and falling in love with the cityscape.

*This town is so posh there are no hostels in town. Not one! 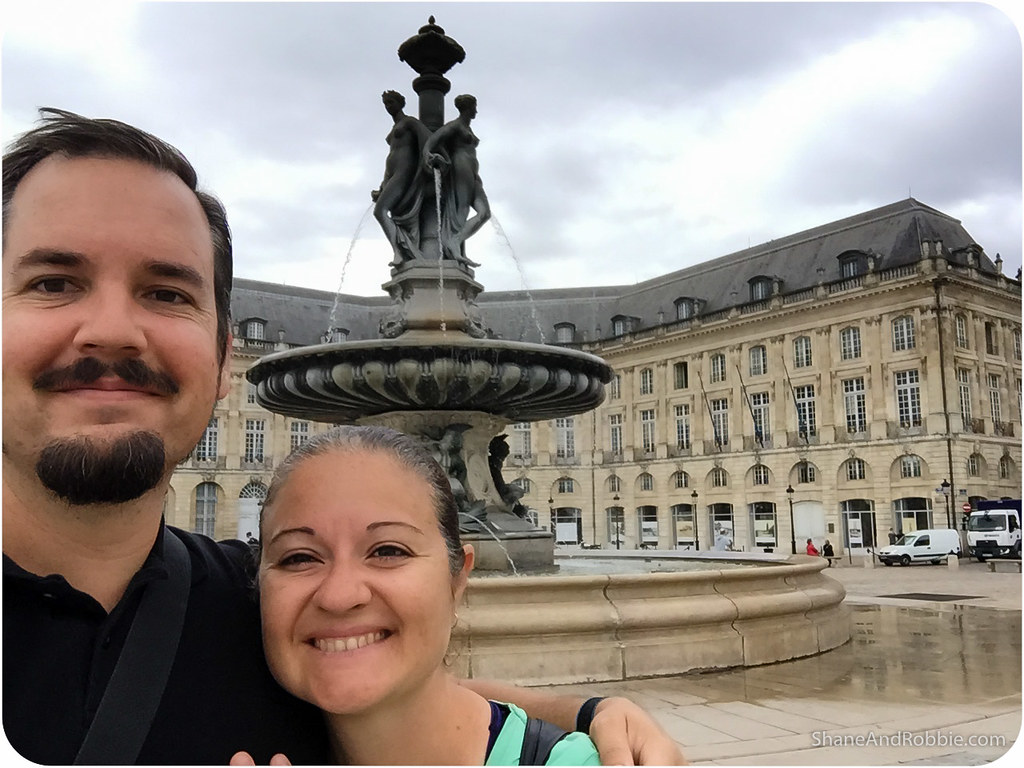 Bordeaux is situated on a bend of the Garonne River in South-Western France, about 5km from the Atlantic coastline. Here the Garonne merges with the Dordogne River creating the wide Gironde estuary, which eventually spills into the Atlantic Ocean. The depth and width of the Girode estuary allowed Bordeaux to become a port city; even today large ocean-faring cruise liners pull into its riverside harbour, disgorging thousands of visitors into the city every day. 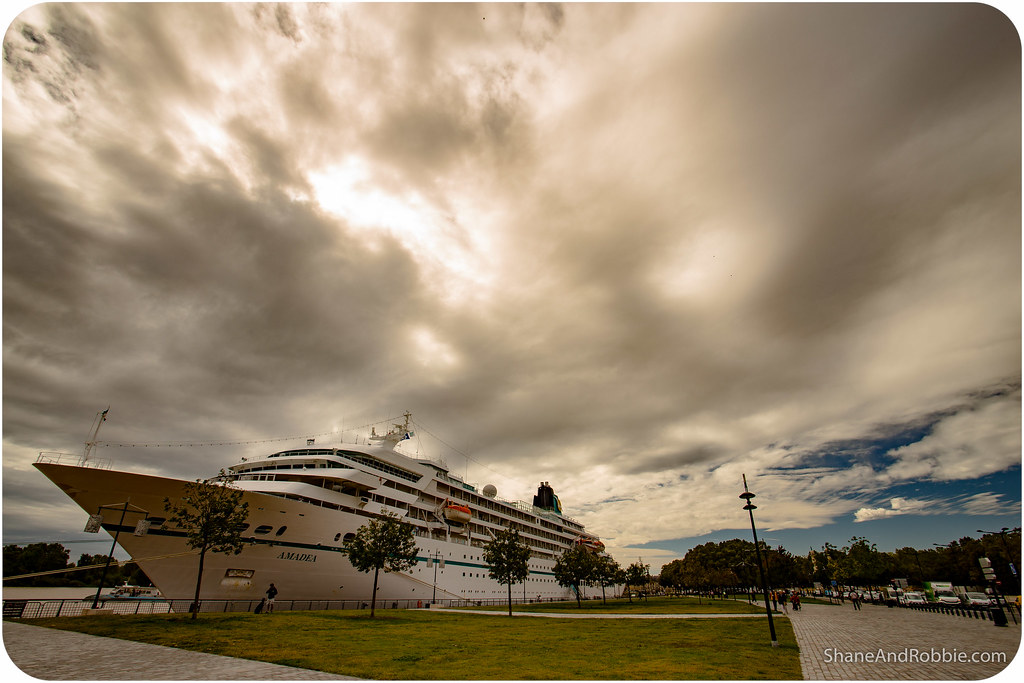 The city’s maritime history has leant it a multicultural, relaxed air that we love; and all the wealth garnered through trade (especially the wine trade) helped make Bordeaux beautiful. That wasn’t always the case, however. Just 15 years ago visitors to Bordeaux wouldn’t have been able to stroll along the riverfront promenade as we did today – the whole length of the River Garonne was once a shambles of dockyards. 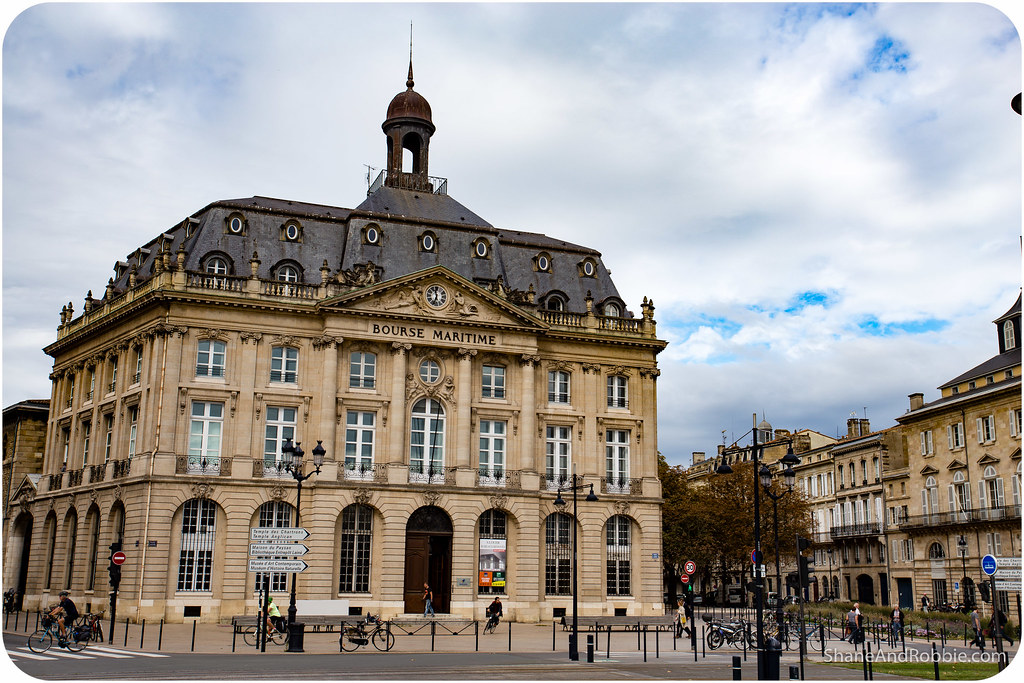 Starting in 2000, tremendous efforts were made on the part of the local council to change the city’s image and make it more tourist-friendly. The docks were all cleared away and moved out of town, the soot-blacked buildings cleaned (a process that is still underway in some parts of the city), and the underlying beauty of Bordeaux once again revealed. The council’s efforts paid off: in mid-2007 half the city was Unesco-listed, making it the largest urban World Heritage Site in the world. 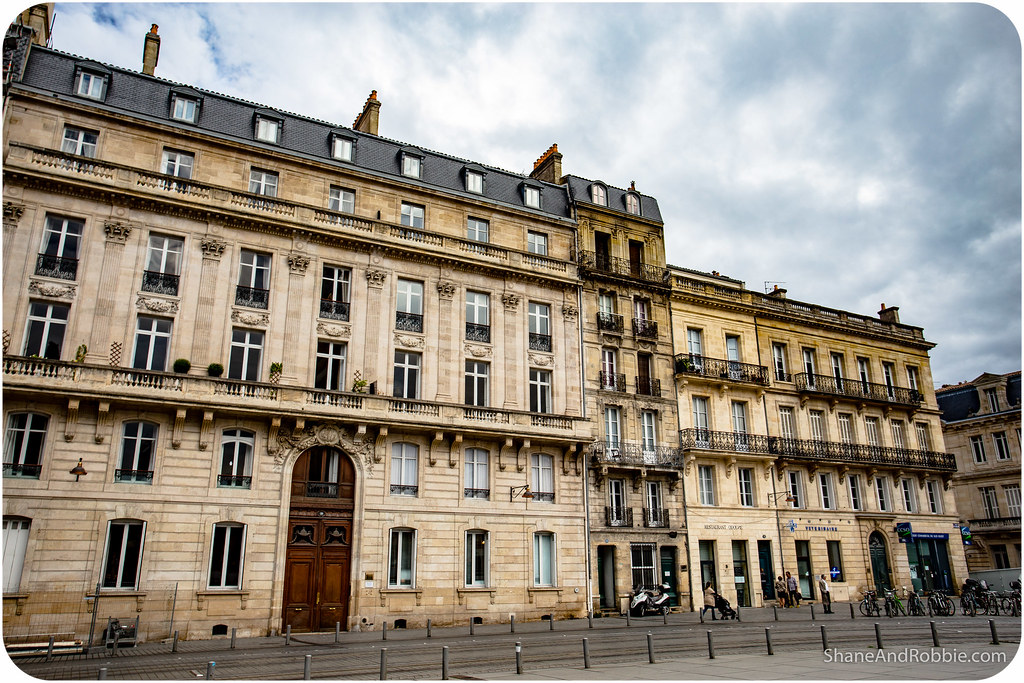 Bordeaux is the largest French city by area; the city’s sprawl is necessitated by the fact that the subsoil hereabouts is shifty and couldn’t support the weight of tall buildings. The whole city is made up of 3-4 storey buildings, many of them built during the 18th century when the city was booming. The centre of town is a tapestry of beautiful sandstone mansions and terraces, said to look a lot like Paris (hence the town’s moniker of “Little Paris”). 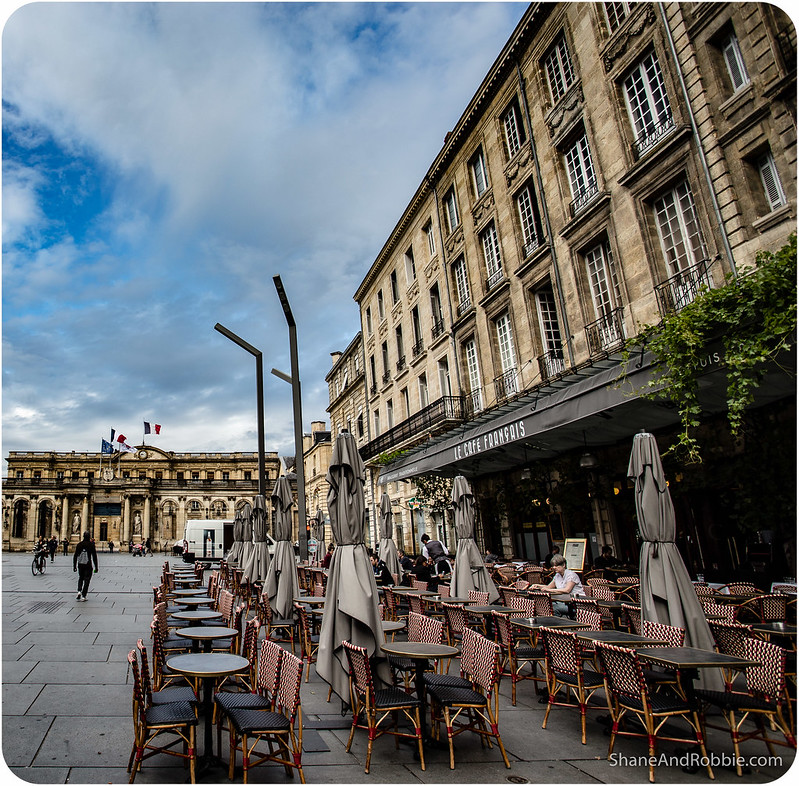 Our explorations of Bordeaux started with Cathédrale Saint André de Bordeaux, the city’s central cathedral. Originally consecrated in 1096, the current structure dates back to the 15th century and is huge. Much of the church is currently being renovated, but even in its current state the magnificence of the building is apparent. 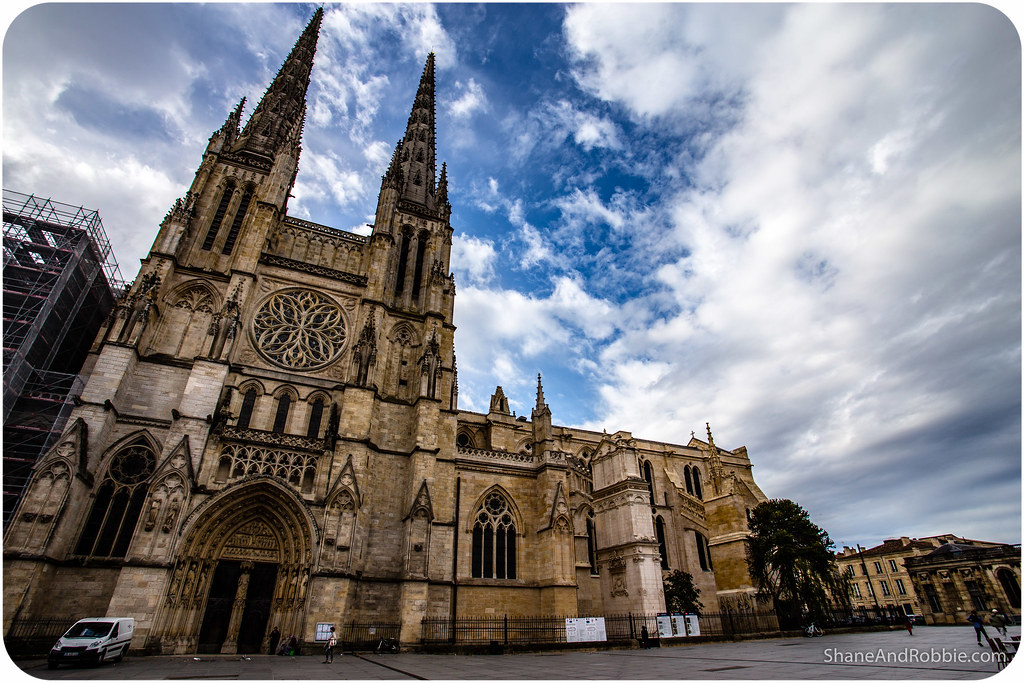 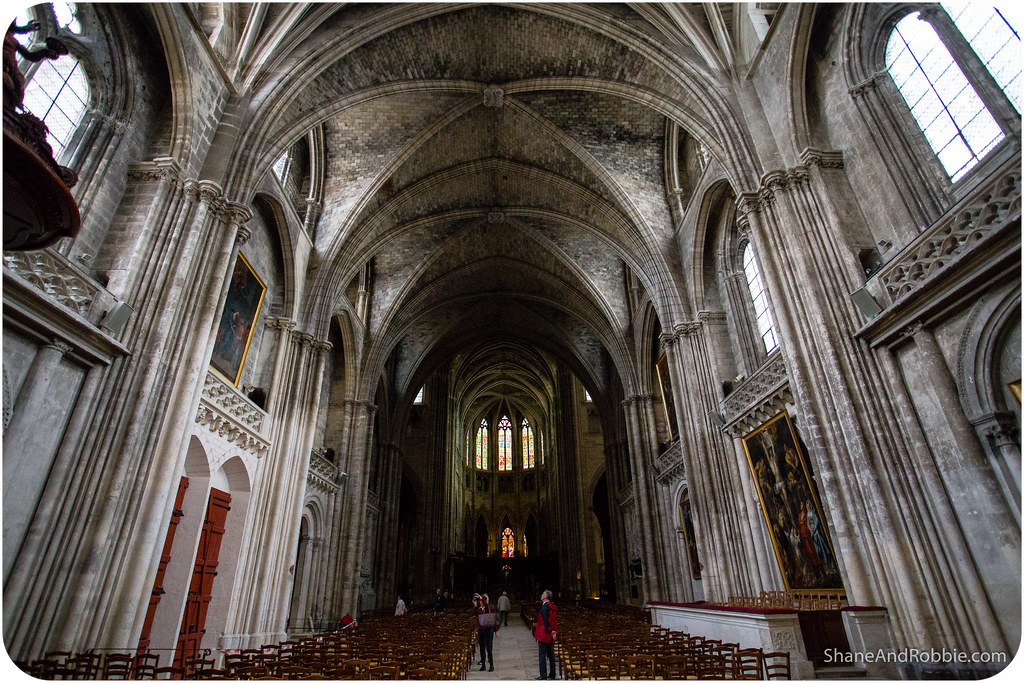 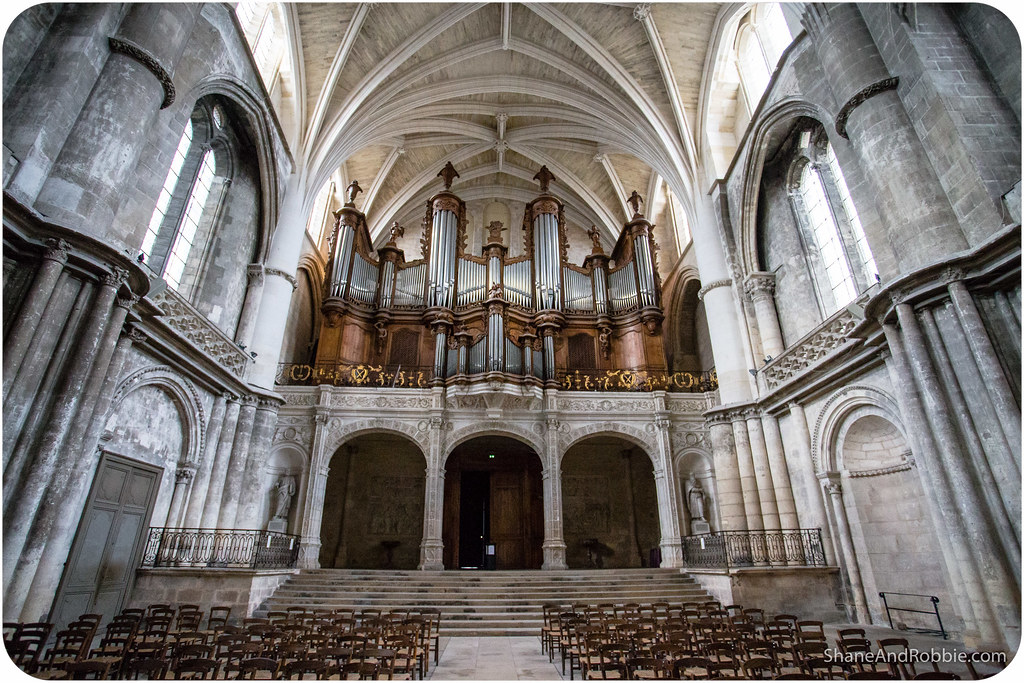 Beside the cathedral sits its bell tower, Le Tour Pey Berland. Built in 1440, the bell tower was named after the archbishop of Bordeaux at the time (who also commissioned the building of it). Interestingly the tower remained silent for many years after its completion as there were no funds left to buy bells; it wasn’t until 1851 that bells were installed, allowing the tower to actually be used for its intended purpose. 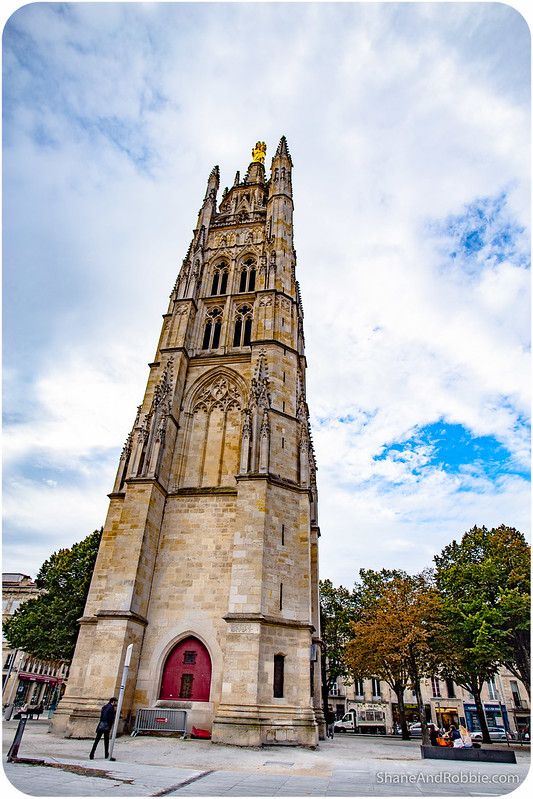 Nearby is the Palais Rohan, once the archbishop’s palace, but is today the seat of the Bordeaux City Council. The building was completely destroyed during World War II but has since been rebuilt. 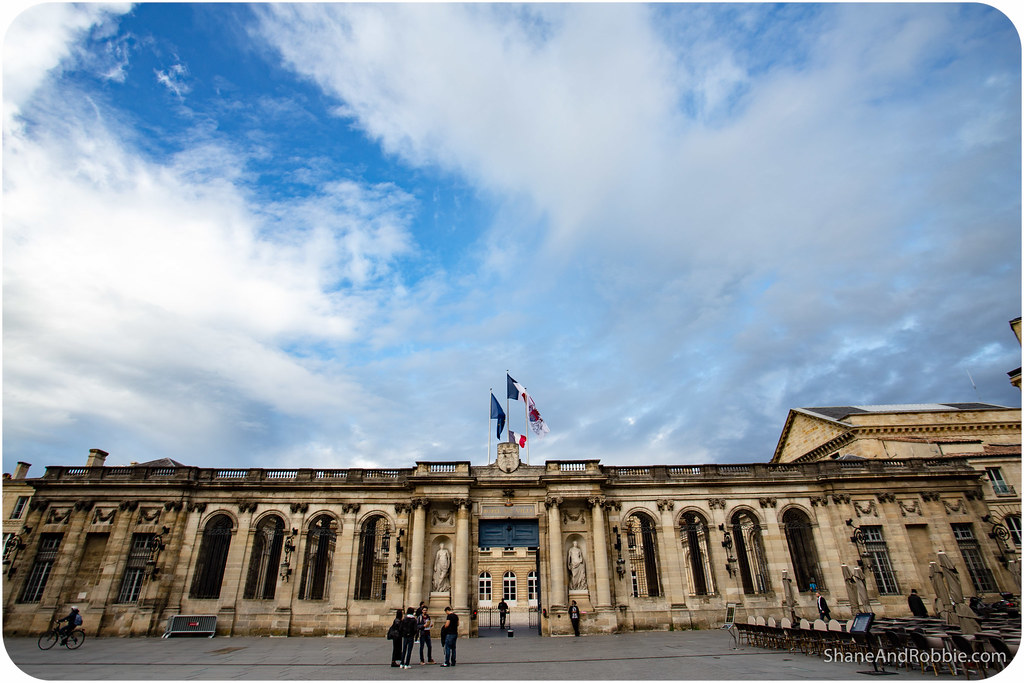 One of the wings of the palace has been converted into the Musée des Beaux Arts de Bordeaux, which is one of the largest art galleries of France outside Paris. With so much to see in Bordeaux we decided to forgo the art gallery for today and continued on towards another of the city’s great churches: the Basilica of St Michael.

This immense Gothic church dates back to the 15th century and was unfortunately closed when we stopped by so we had to settle for admiring it and its adjacent bell tower from afar. 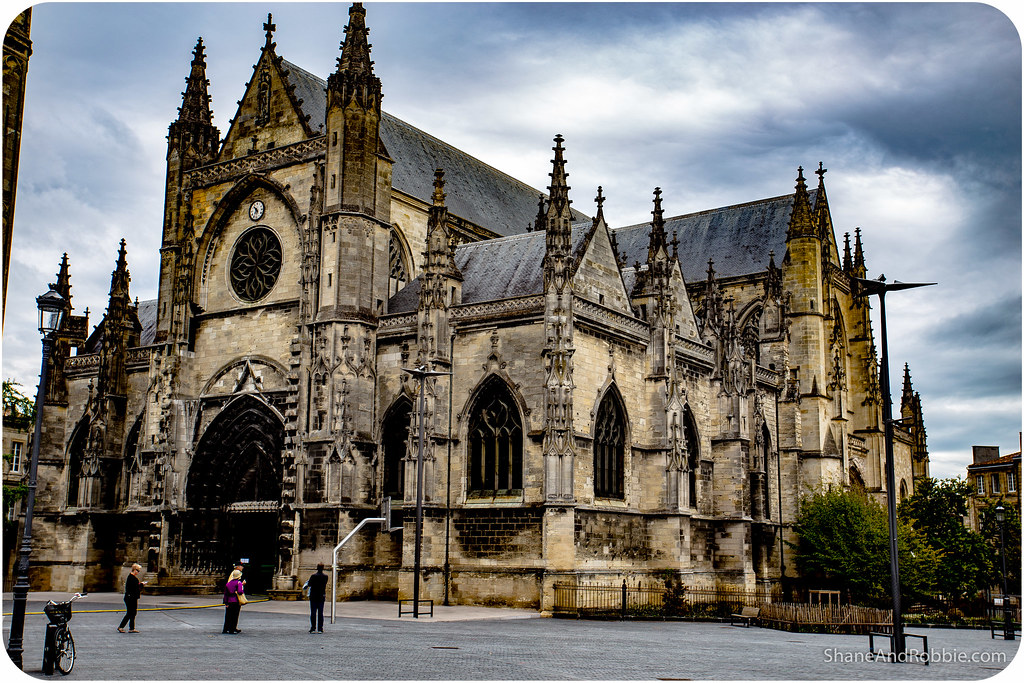 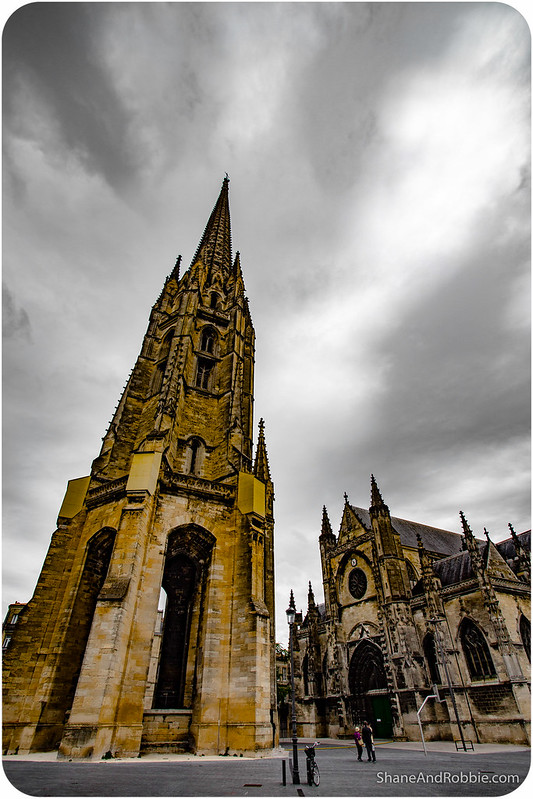 Heading towards the river from there we passed under the archway of Le Grosse Cloche. This tower is one a few Medieval buildings left in the city; it’s all that remains of the former town hall, which was destroyed during World War II. In years gone by the bell would have been rung in times of emergency and in times of celebration – such as when the grape harvest was in*.

*Wine is big business around here, and has been since the Romans planted the first vines in the 1st century. The Bordeaux wine trade is estimated to be worth some €15 BBBBbbbillion! 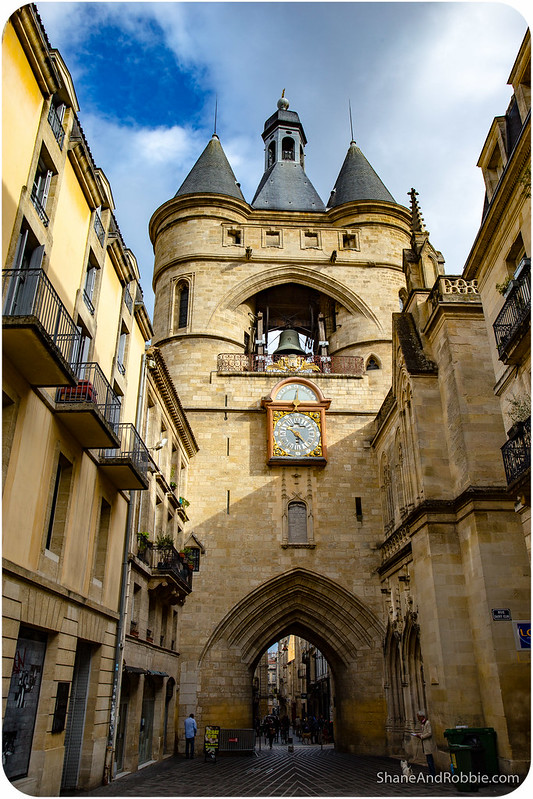 Reaching the River Garonne we spent some time strolling along the waterfront. After years of neglect, the former wet docks are the city’s new hot spot, with a number of cafés and public gardens lining the promenade. 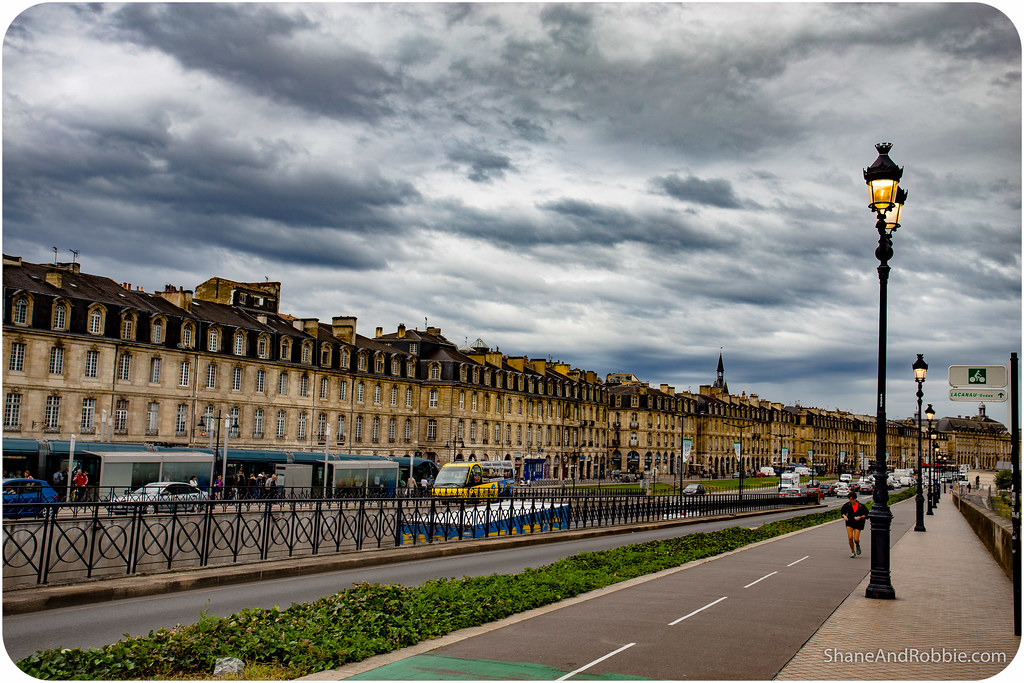 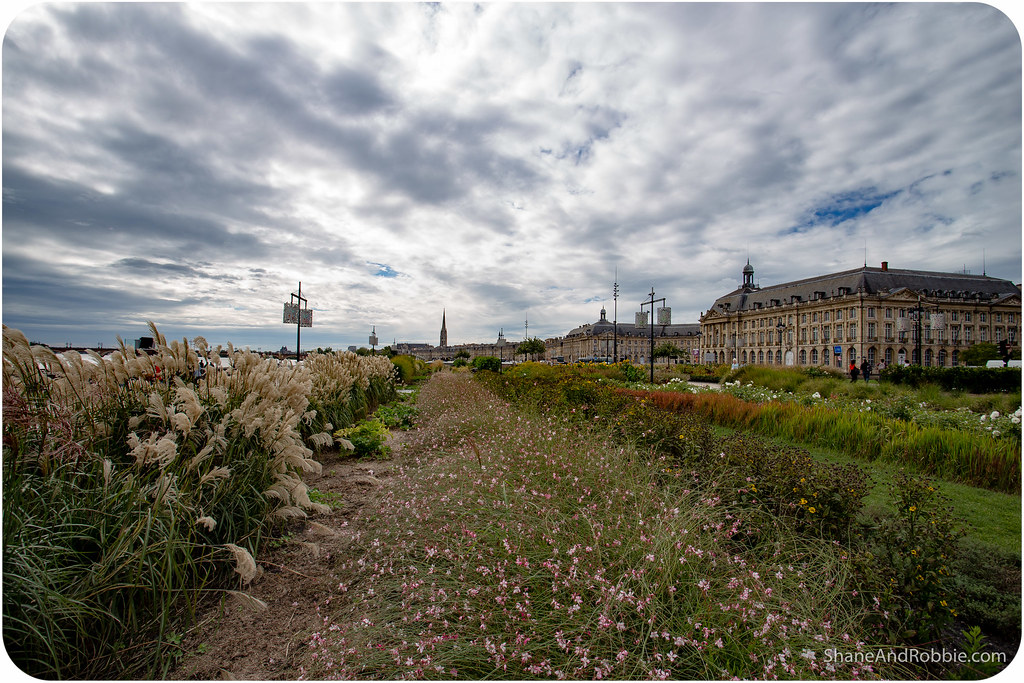 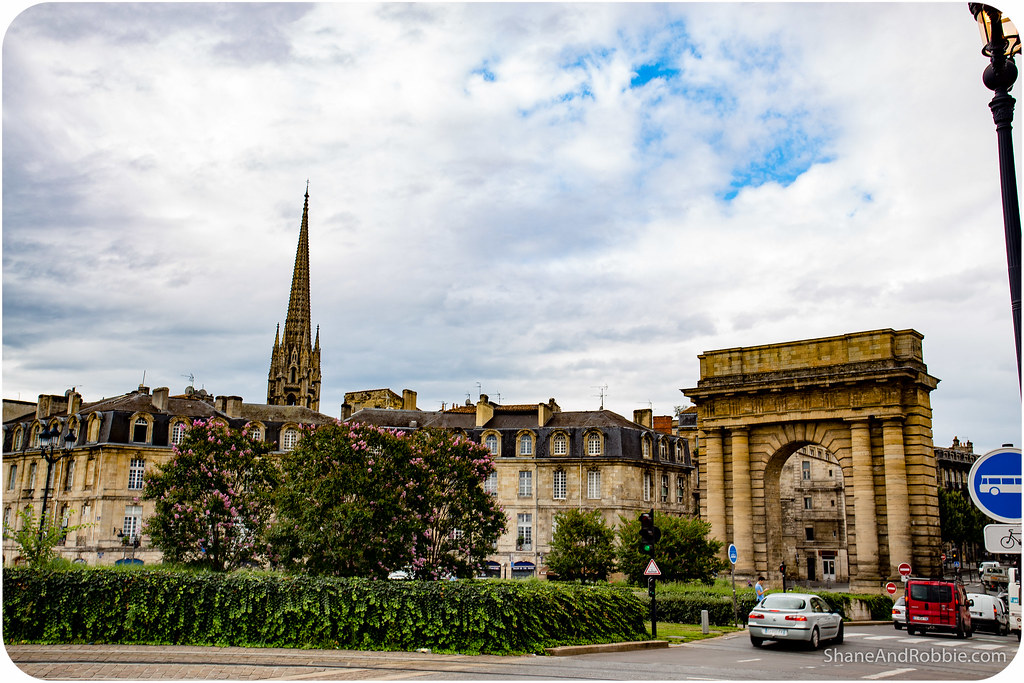 For many centuries the only bridge to span the Garonne was the Pont de Pierre (i.e. the Bridge of Stone). The bridge was planned and designed in the 1700s, under the orders of Napoleon I, but construction did not begin until 1819. The strong currents that pass through the river at the turn of each tide made building the bridge quite a challenge, but 3 years later the bridge was opened. It remained the only path across the river until 1965! 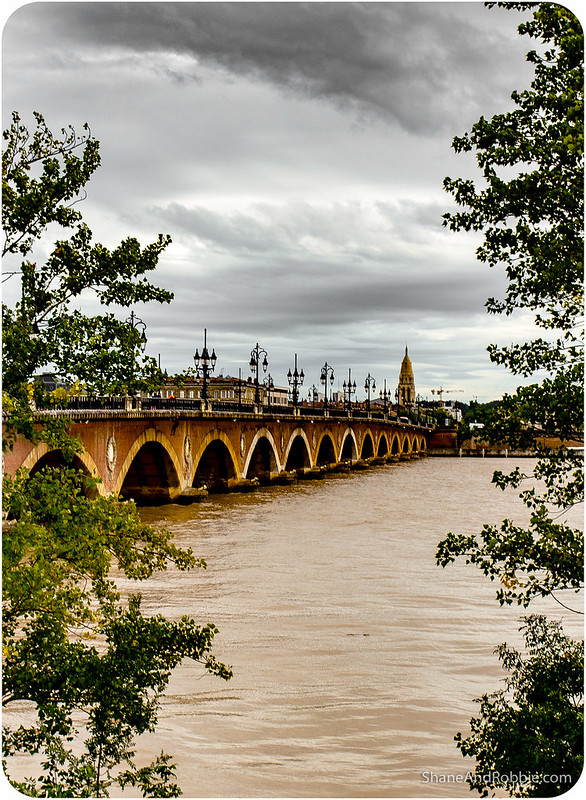 From the riverside promenade we could see the sprawl of Bordeaux extending along the Garonne. Along the way we passed the original entrance to the Medieval city: La Porte Cailhau. 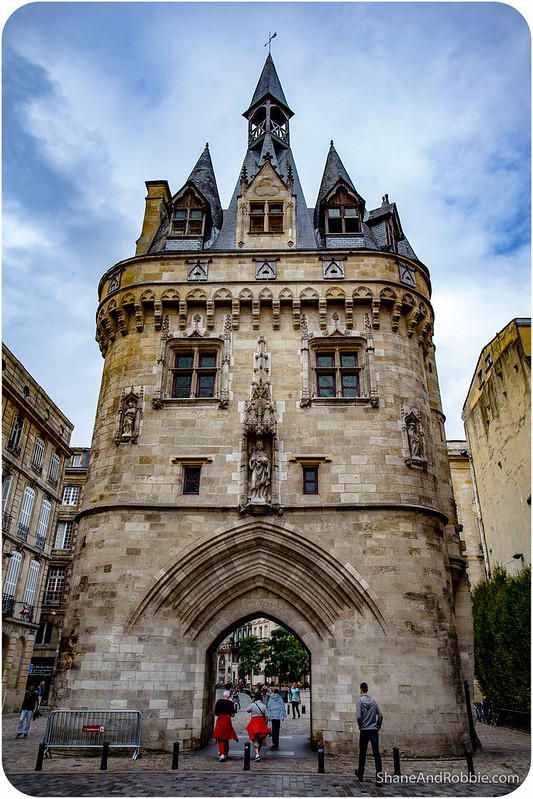 We also passed the beautiful Place de la Bourse, a large public square built in the 18th century under orders of King Louis XV, who wanted a royal square to be laid out in Bordeaux to assert his dominance as king after Bordeaux became the site of some unseemingly rebellious activity. 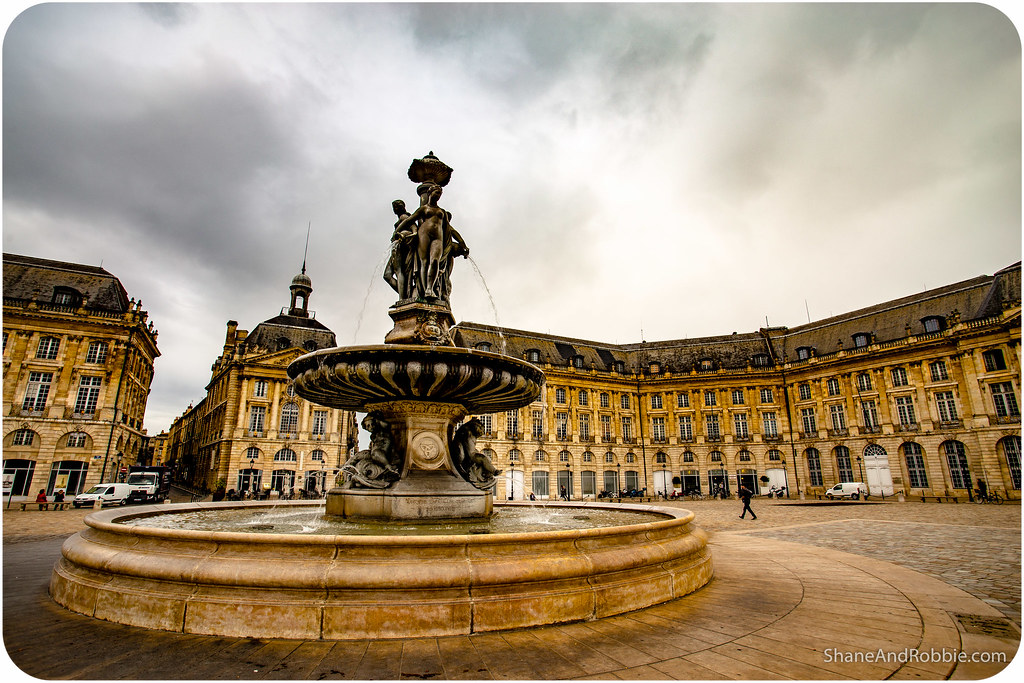 We turned away from the river around Place des Quinconces, one of the largest city squares in Europe (it covers approximately 31 acres). Walking under the trees* we could see leaves starting to fall – a sure sign that autumn is here (as if the cooling temperatures and changeable weather we’ve had the last few days haven’t been enough of a sign!).

*Trees that were planted here in 1818 in a quincunxes pattern, hence the name of the square. 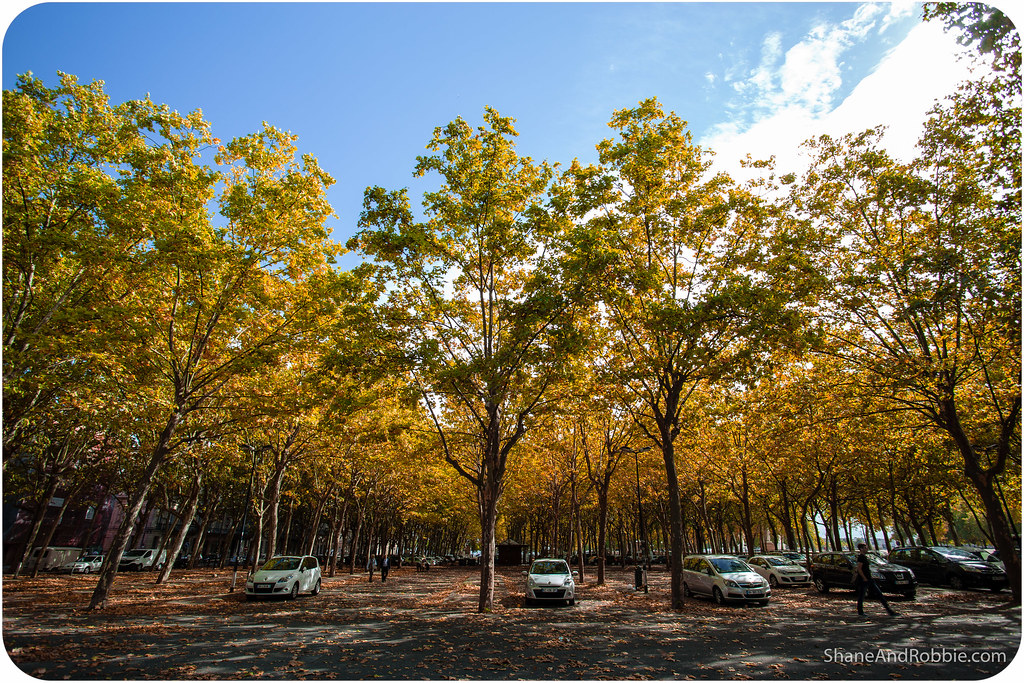 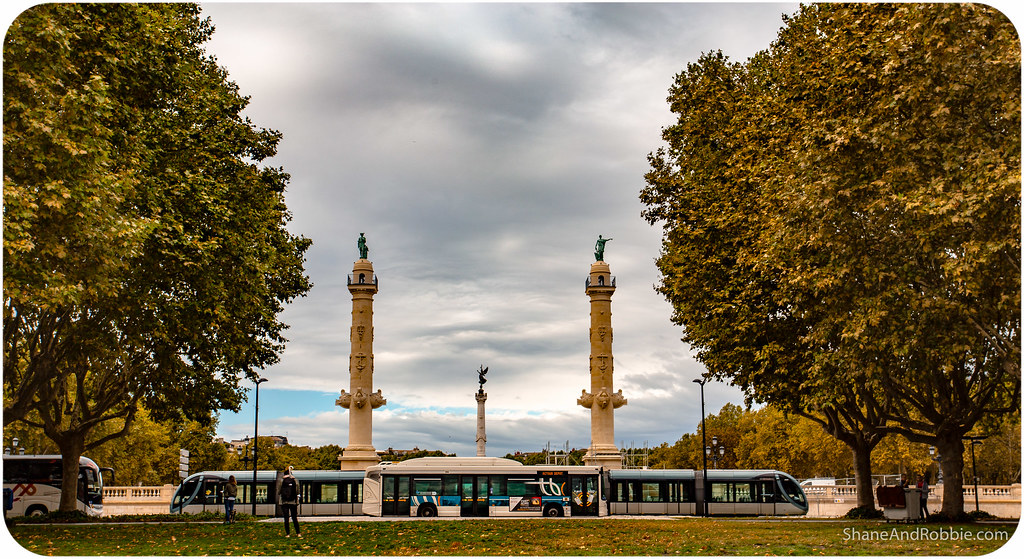 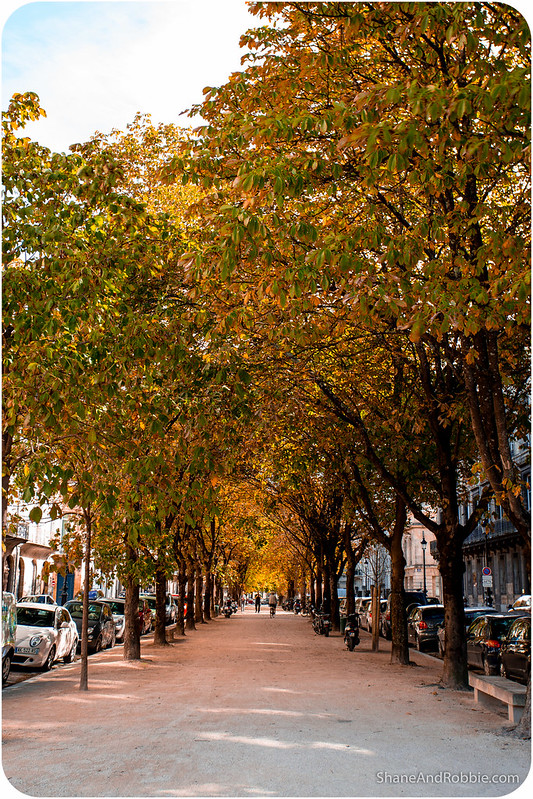 Central to the Place des Quinconces is a large monument, erected between in 1902 in memory of the Girondist rebels who died during the French Revolution. 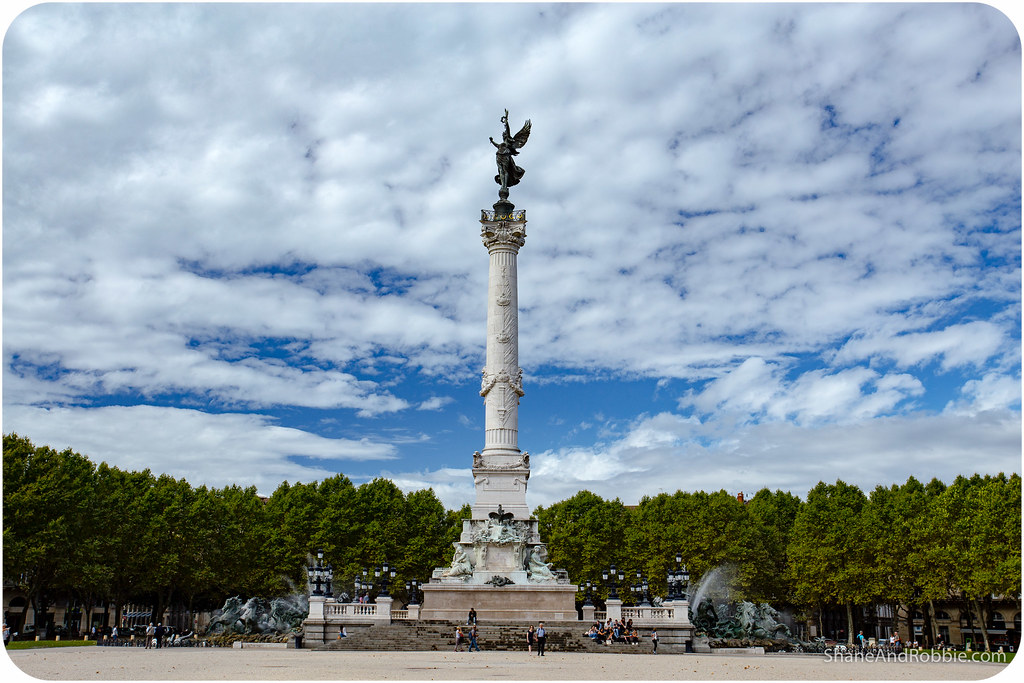 From here our wanderings became less structured as we’d seen the major sights and really just wanted to see as much as could of the city streets. Not to belabour the point too much here, but this really is a gorgeous city! 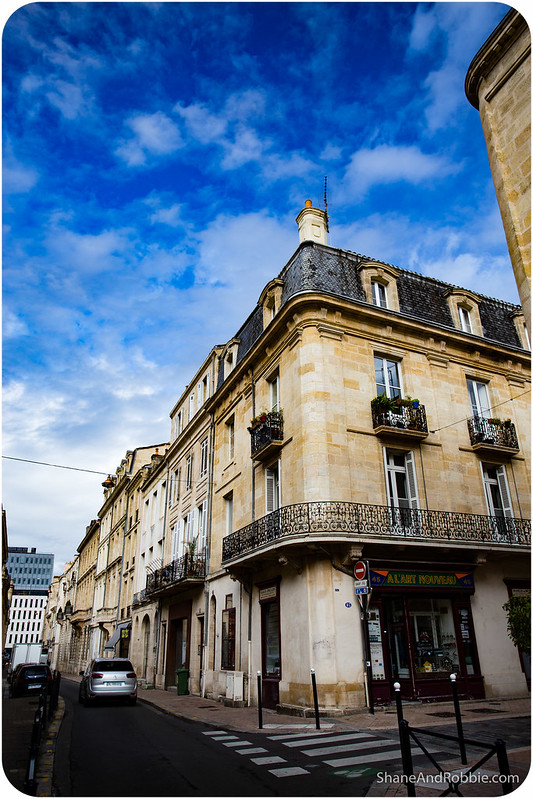 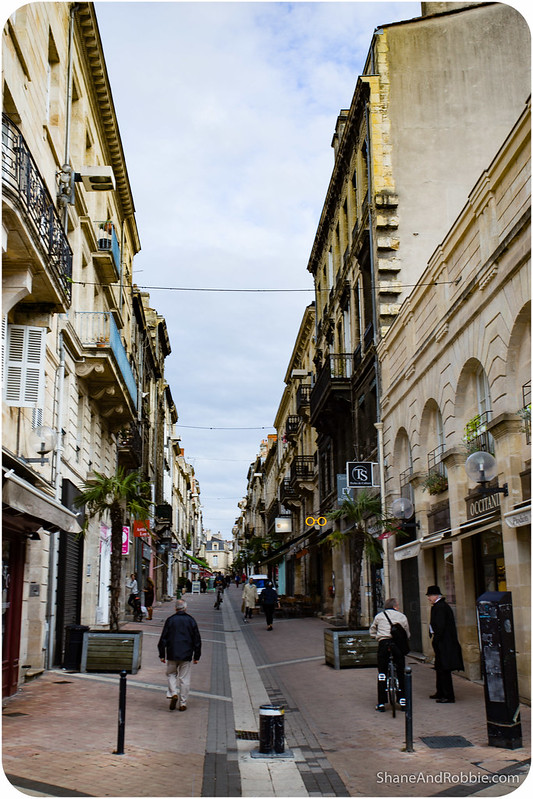 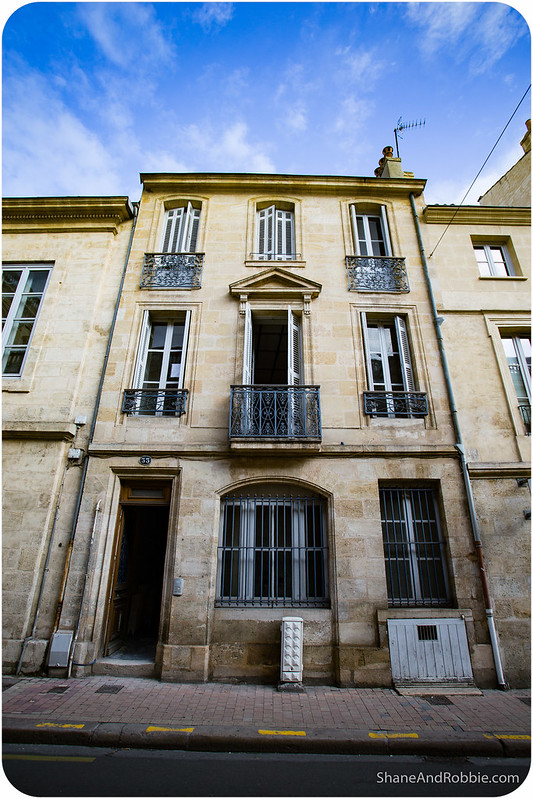 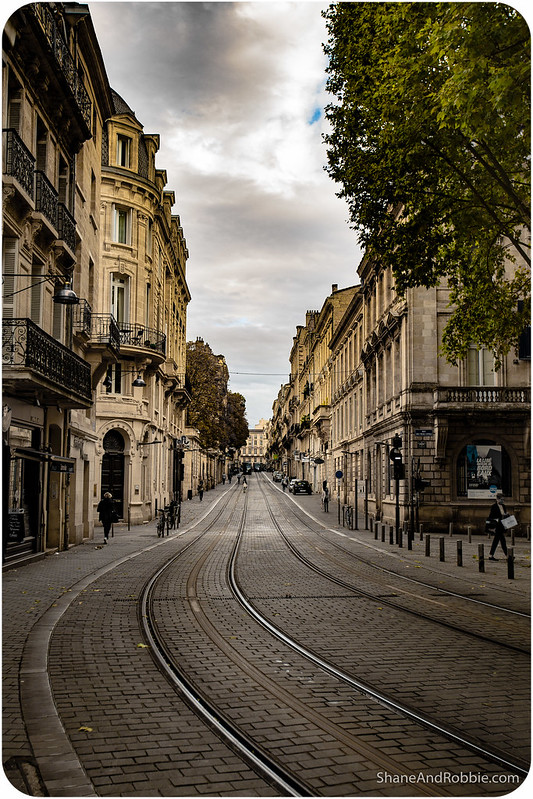 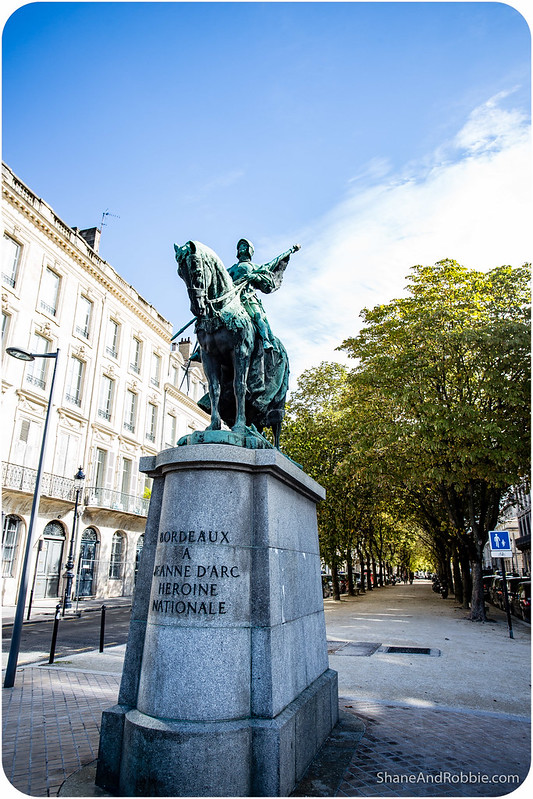 When evening came we headed out for dinner and strolled around afterwards for a while, keen to see a bit more of the town by night. After a bit of afternoon rain, the city glowed; cafés and restaurants buzzed with life with people; and the air was fresh and brisk. If the town is pretty by day, it’s simply stunning by night.