A DAY IN ST EMILION

About 45 minutes East of Bordeaux lies the village of St Emilion, a Medieval enclave of cobblestoned streets, golden stone buildings, and vineyards. The area around St Emilion is famous for its red wines and has a reputation for being a great weekend destination for the well-to-do. It’s also a UNESCO World Heritage Site however, with fascinating Romanesque churches and ruins to explore. The hills around St Emilion make for a great hiking destination too, as we discovered today. 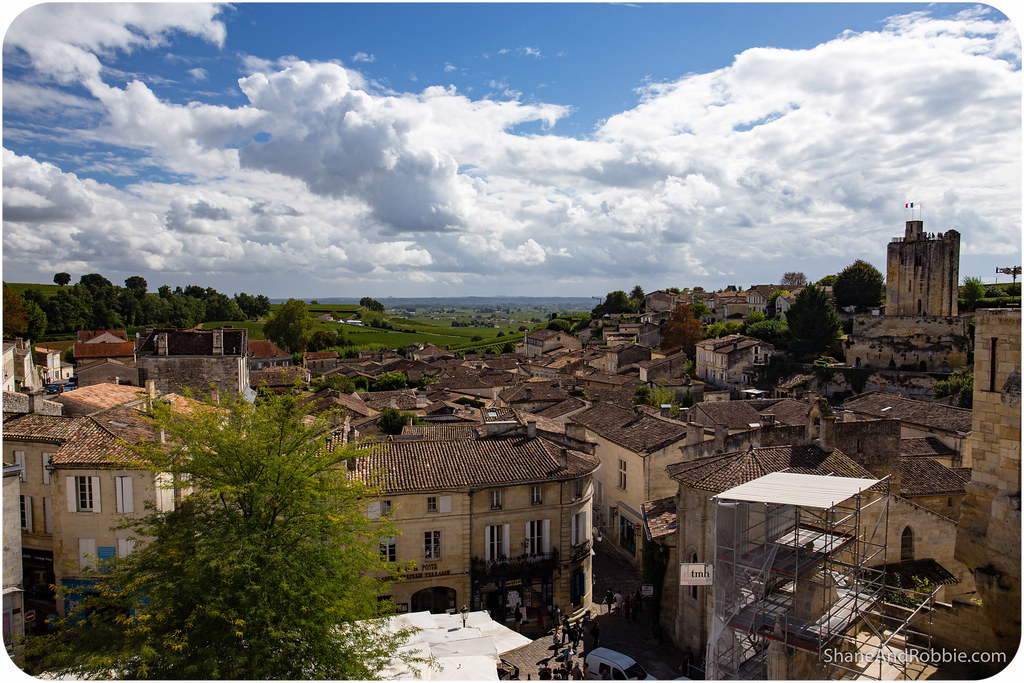 Our day started slowly enough; we’ve learnt to sleep in whilst in France – nothing’s open before 9:00am anyway (not even the cafés). So after a leisurely start and our legally-required daily dose of café au lait and pain au chocolat, we were ready for the day to begin in earnest. 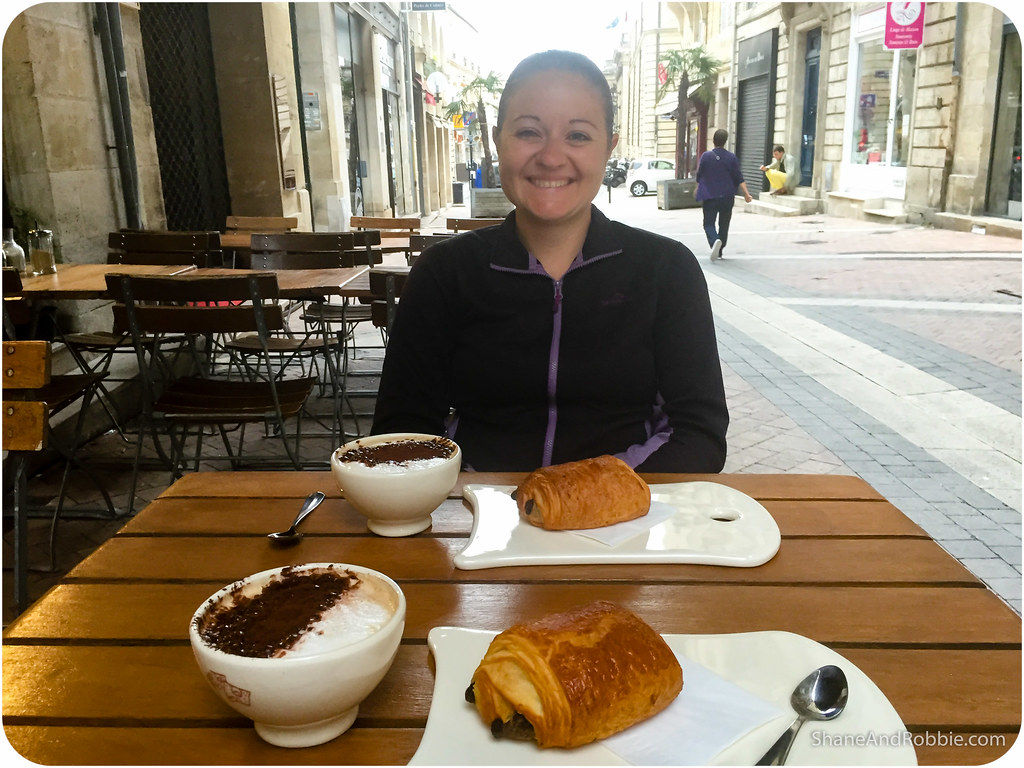 There are plenty of organised tours that can take you to St Emilion (and its surrounding wineries) for the day, but we prefer doing our own thing where possible. A quick train ride and we were soon out into the beautiful Dordogne valley, surrounded by acres of prestigious vineyards.

With this year’s harvest just begun, many vines were still heavy with fruit and the smell of freshly pressed grapes came wafting through the air every now and then. It was lovely walking around* the vineyards, along the country lanes, enjoying the cool autumn breeze and marvelling at the rolling scenery laid out around is.

*The vineyards here in Bordeaux are way to precious for you to just walk THROUGH them! Most of the fields were fenced off and well guarded with big signs telling people to stay clear. 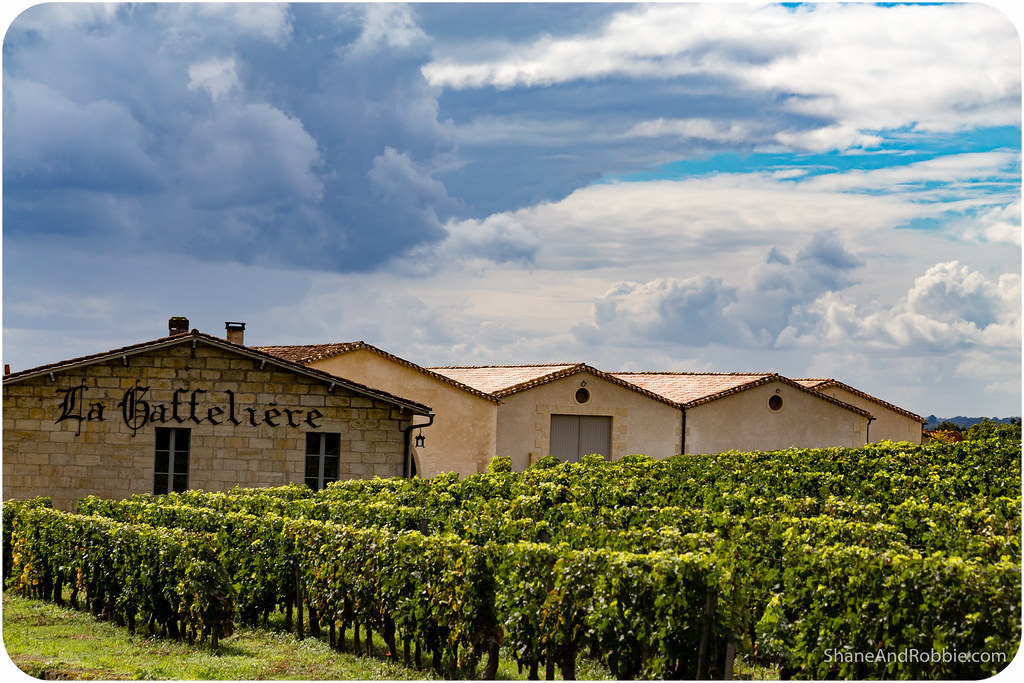 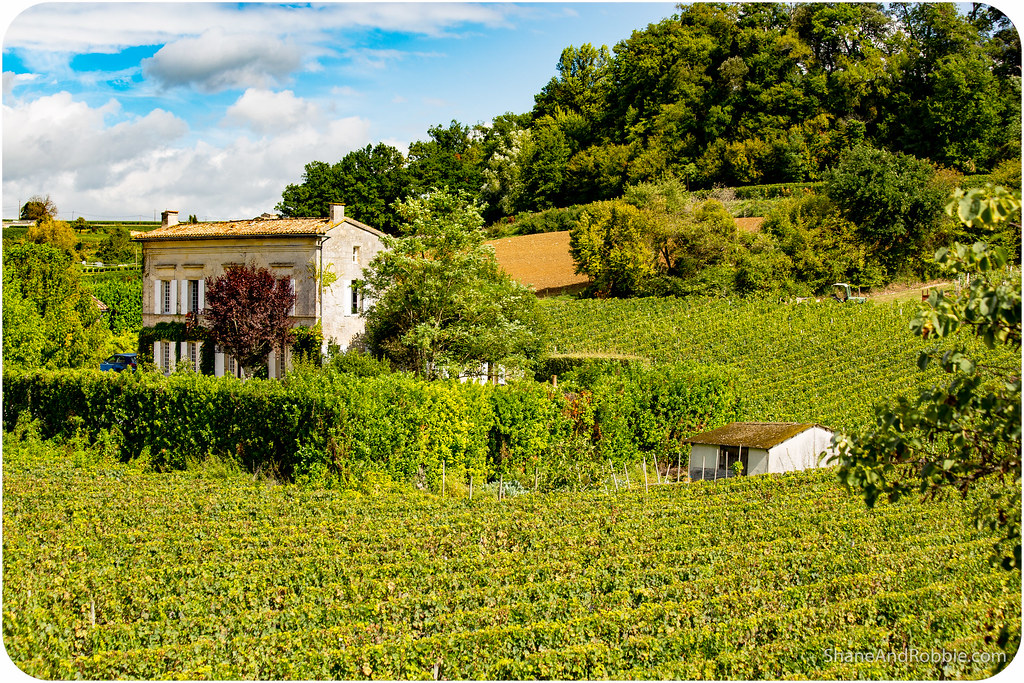 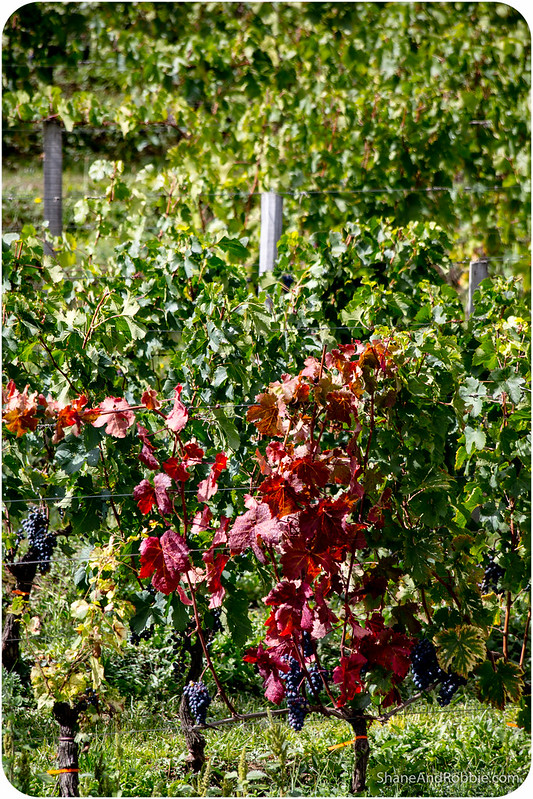 Bordeaux could be said to be the wine capital of the world; it’s surrounded by vineyards and the wine industry in this region is estimated to be worth €15billion per year. There are 287,000 acres of vineyards in the region, including 57 appellations, 10,000 wine-producing châteaux, and 13,000 grape growers. With an annual production of approximately 960 million bottles, the Bordeaux region produces more wine than any other area in the world. 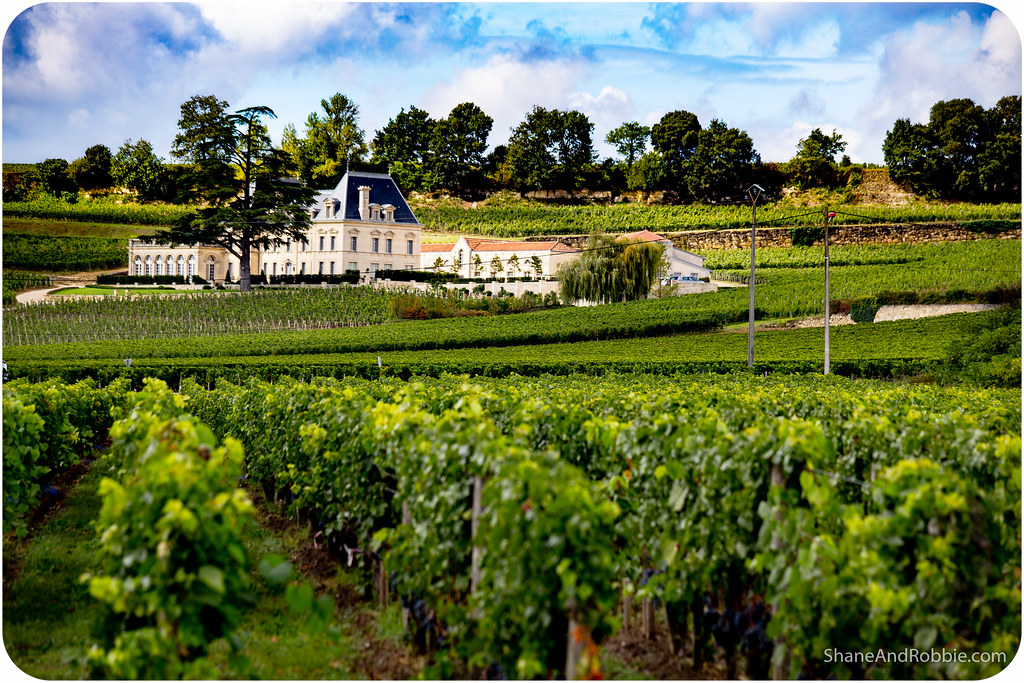 This has been a wine producing region for millennia. The vine was introduced to the Bordeaux region by the Romans to provide wine for local consumption, and wine production has been continuous in the region since then. Many of the oldest and most prestigious wineries are in and around St Emilion. 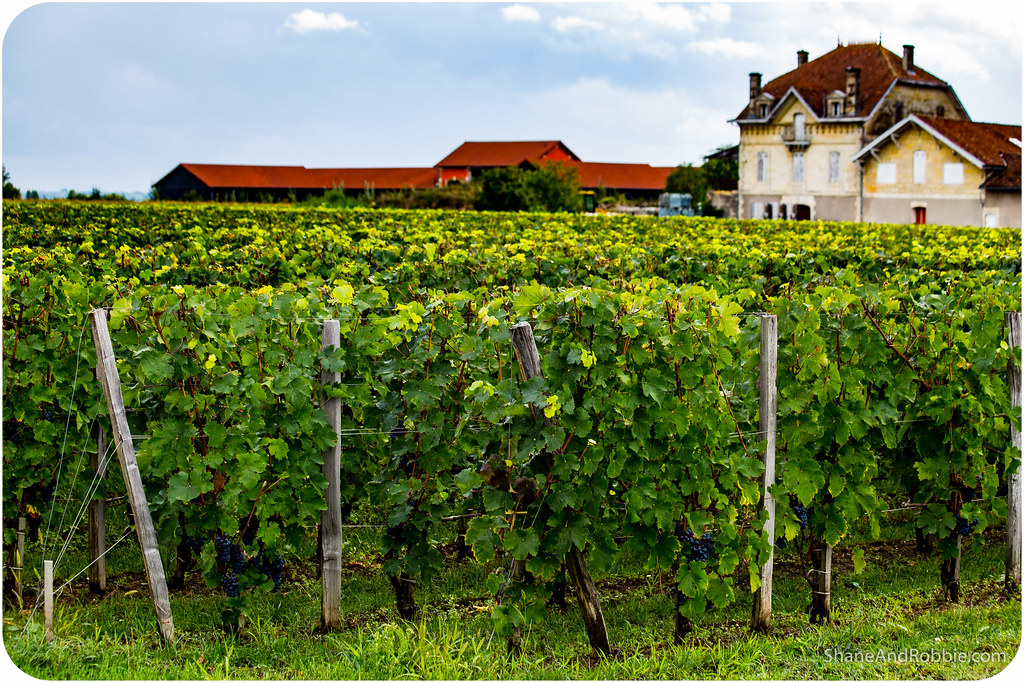 The Romans planted vineyards in what was to become St Emilion in the 1st century, though commercial wine production only began here in the 8th century. The town’s legacy as a sub-appellation of note began when a monk named Emilion settled in the region after completing a lengthy pilgrimage. He fell in love with the place, dug a cave in the hillside there, and set about establishing a monastery where others could come and enjoy the peace and beauty of the area. 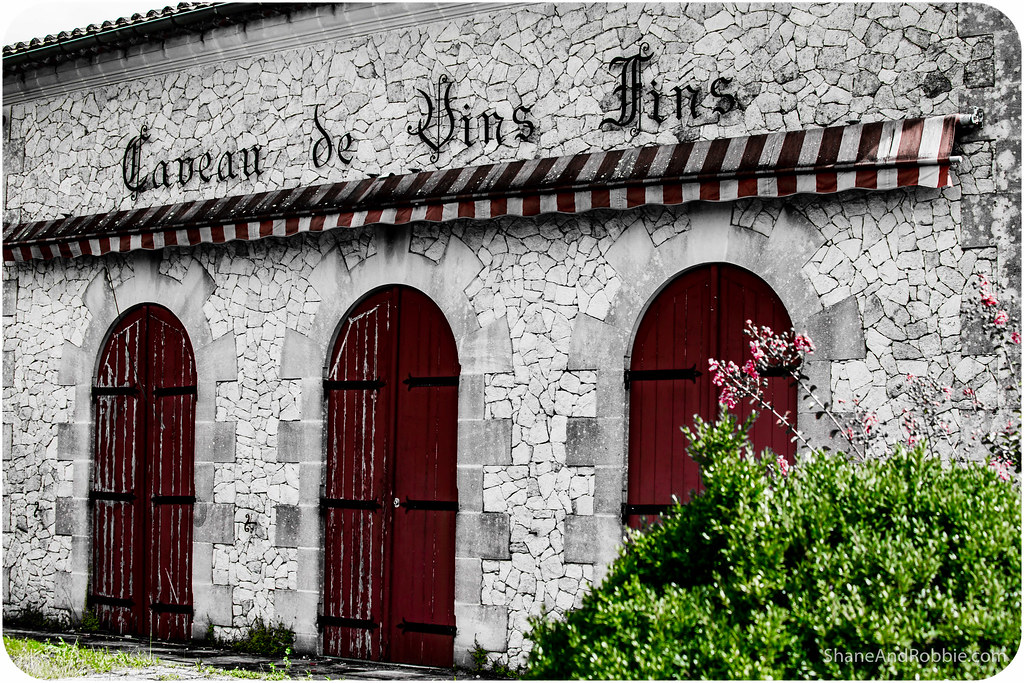 The monastery flourished and its wines, initially produced by the monks for their own needs, gained a reputation. When Emilion died his followers named their growing community after him and labelled their bottles with the same moniker. And so the town and brand of St Emilion was born. 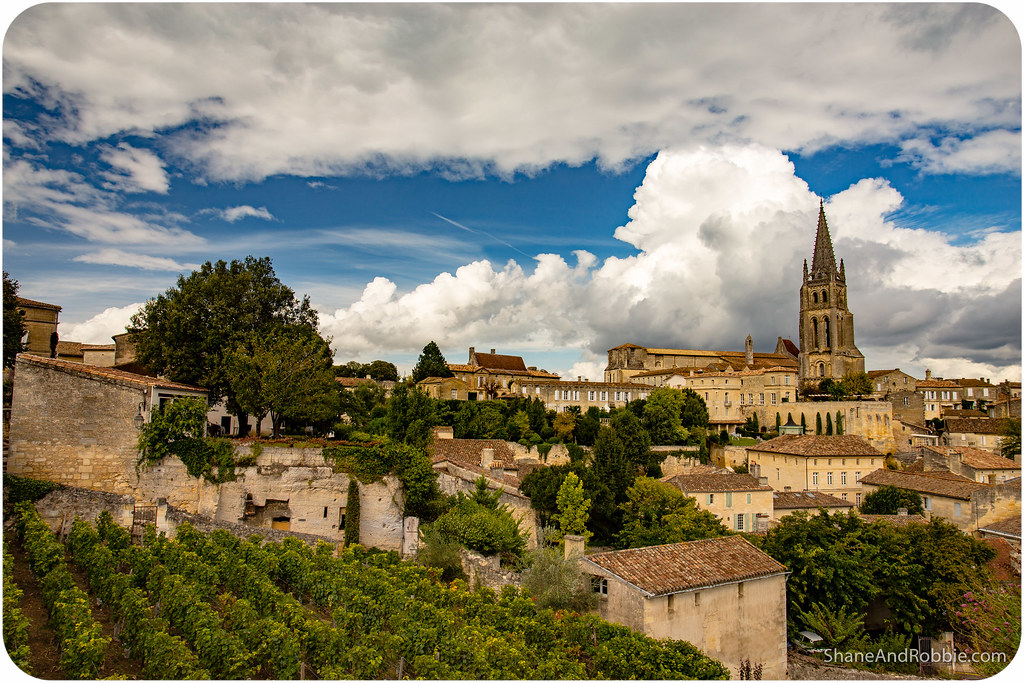 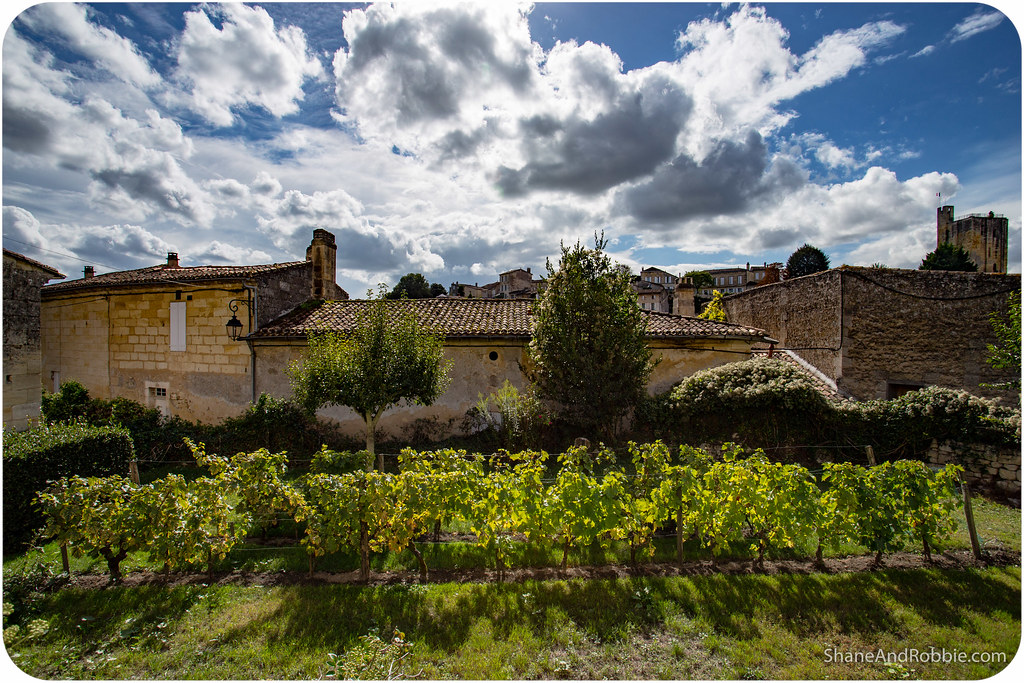 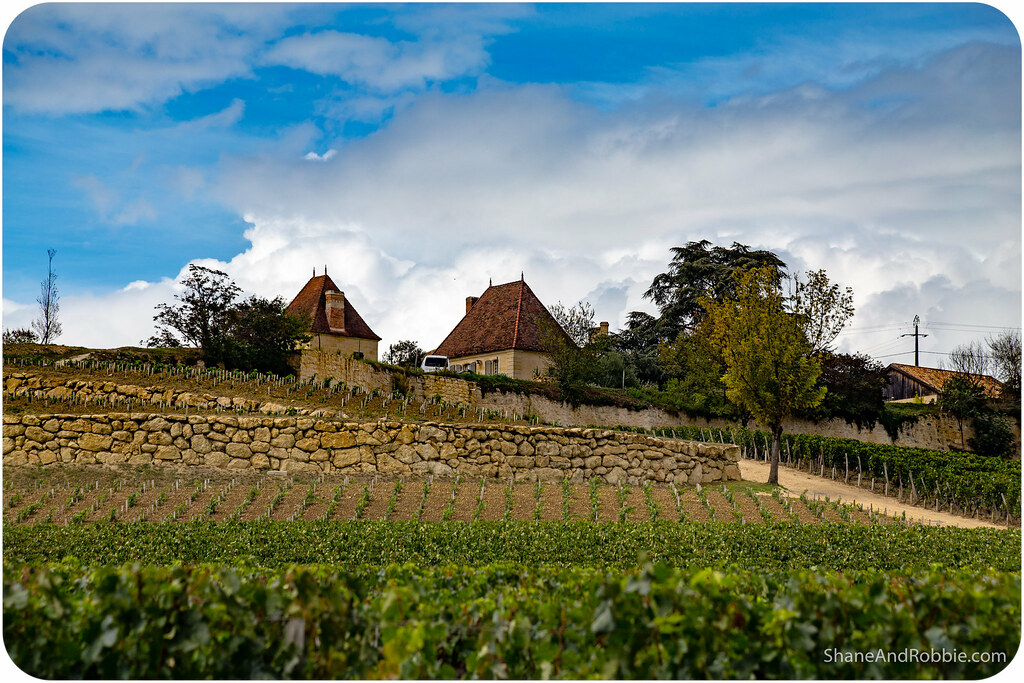 Over the next 300 years, monks carved a church out of the hillside where Emilion had first dug his cave. This huge church was formed from a single piece of limestone, which still remains one of the greatest monolith churches in Europe and St Emilion’s greatest tourist attraction. Unfortunately we couldn’t just wander in and explore the monolithic church ourselves – it’s only open at certain time of the day and must be visited as part of an organised tour run by the local tourism office. Still, we got to see the outside of it and wonder at the dedication of a community that carves an entire church out of stone. 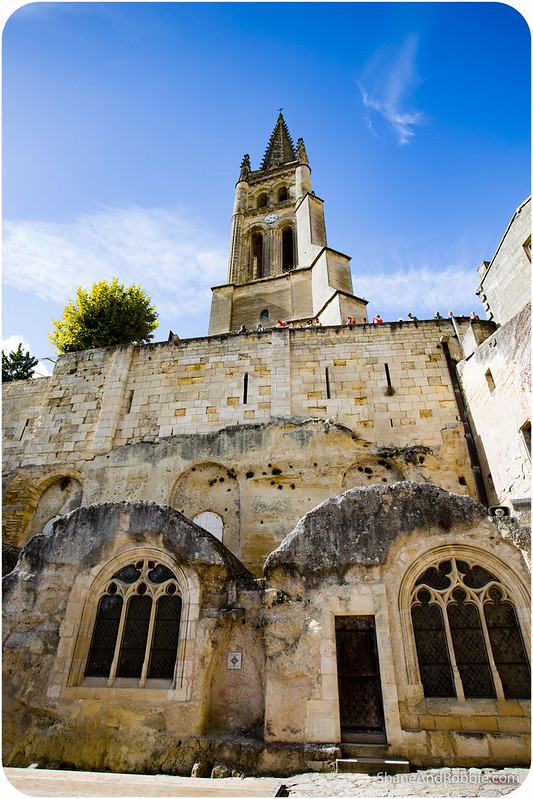 The town’s other church was open for a visit, however, so we DID get to explore the 12th century Romanesque L’Eglise Collegiale and the attached cloister. 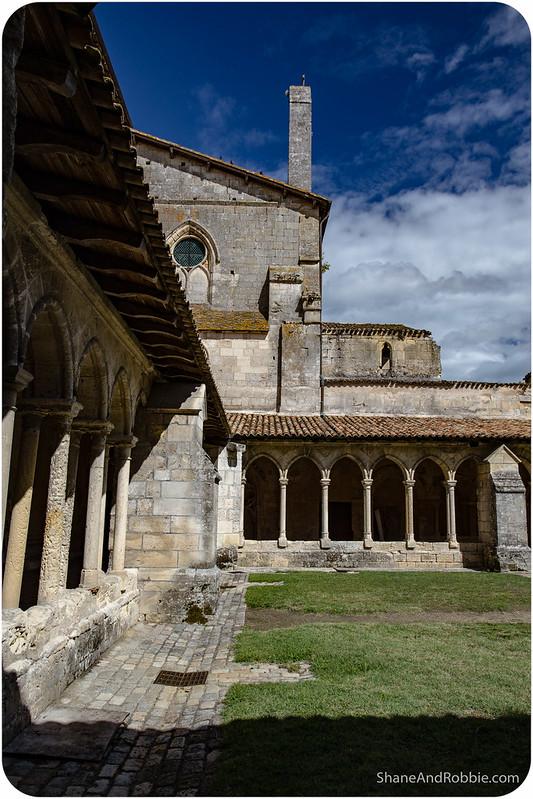 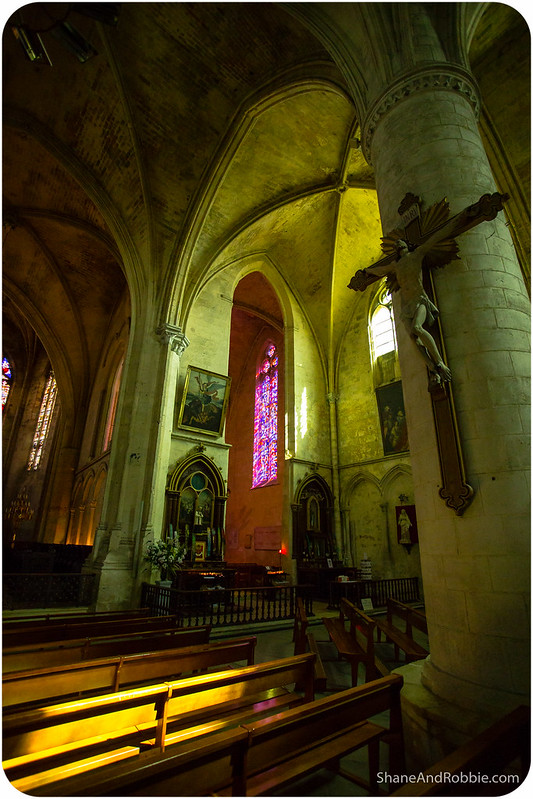 Most of our time was just spent wandering the town’s narrow, cobbled streets. It’s amazing to think that, despite its illustrious beginnings, by the time of the French Revolution, the town was virtually unoccupied. It wasn’t until the 19th century that St Emilion flourished again, revived when the wine and tourist trades boomed. 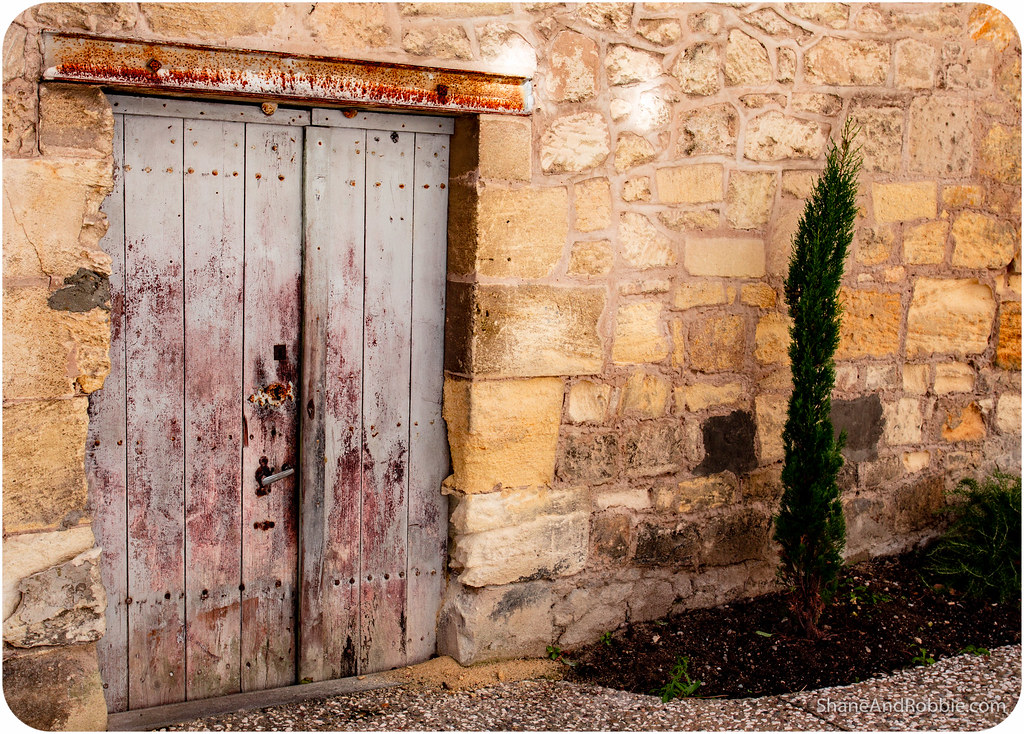 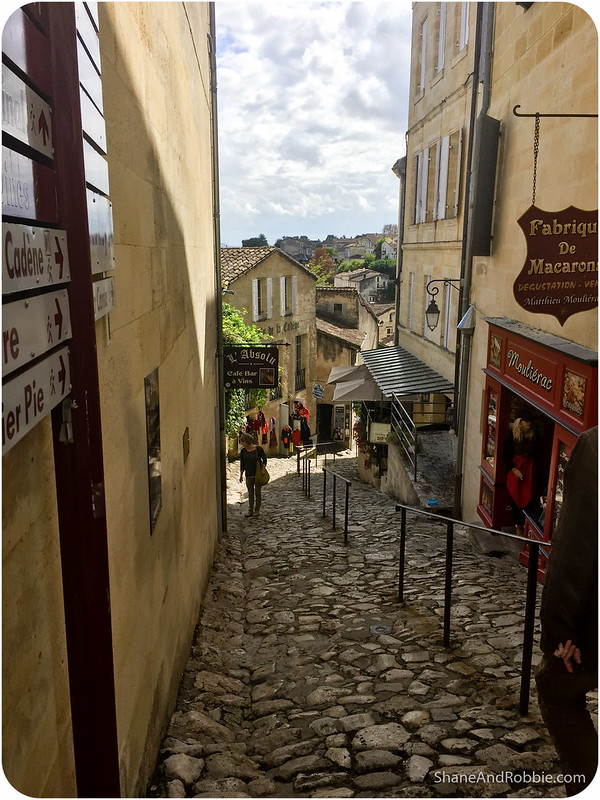 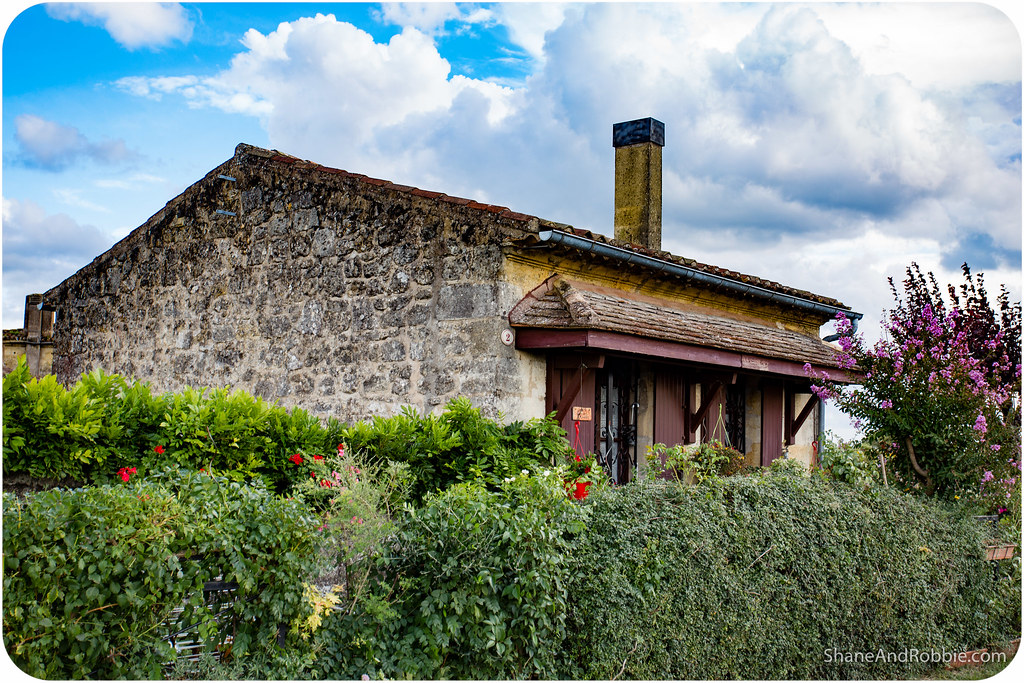 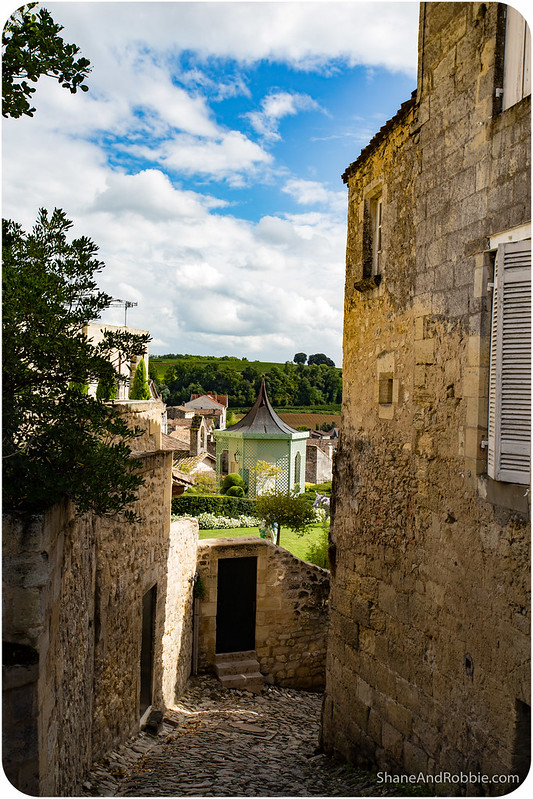 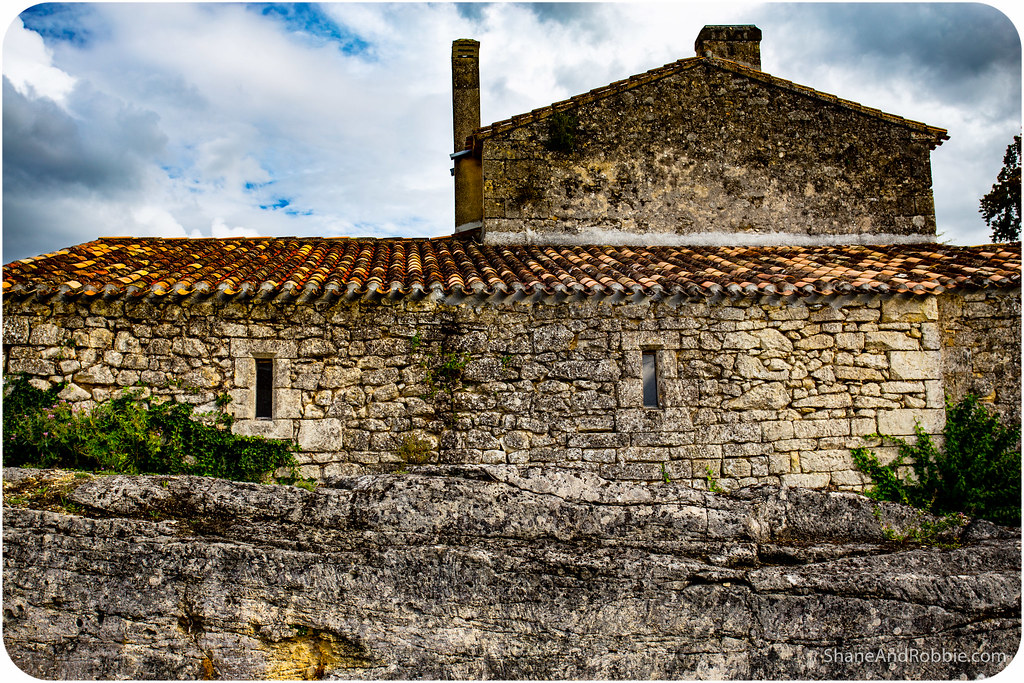 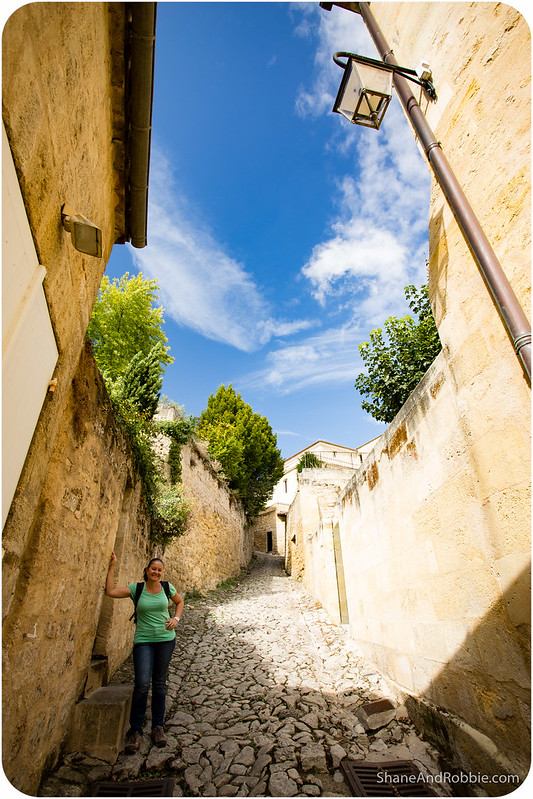 There are great views of the village and its surrounding vineyards to be had from either the Monolithic Church’s bell tower or the Tour de Roy (i.e. The King’s Tower). 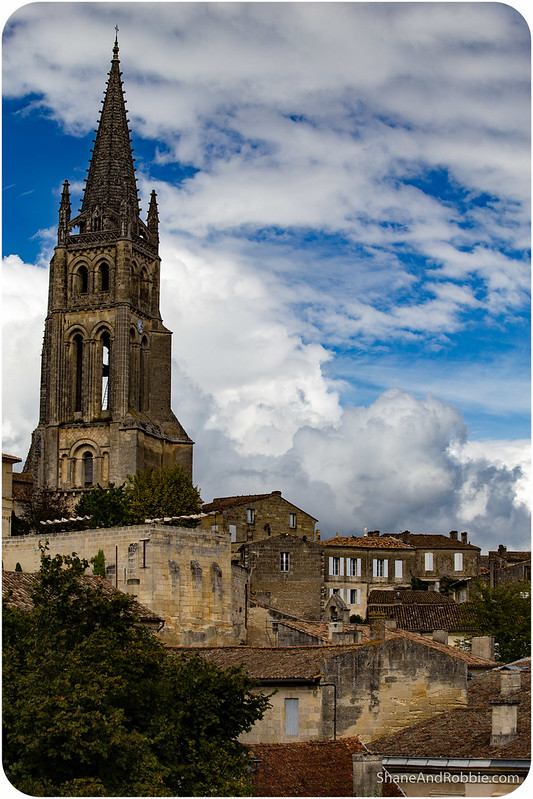 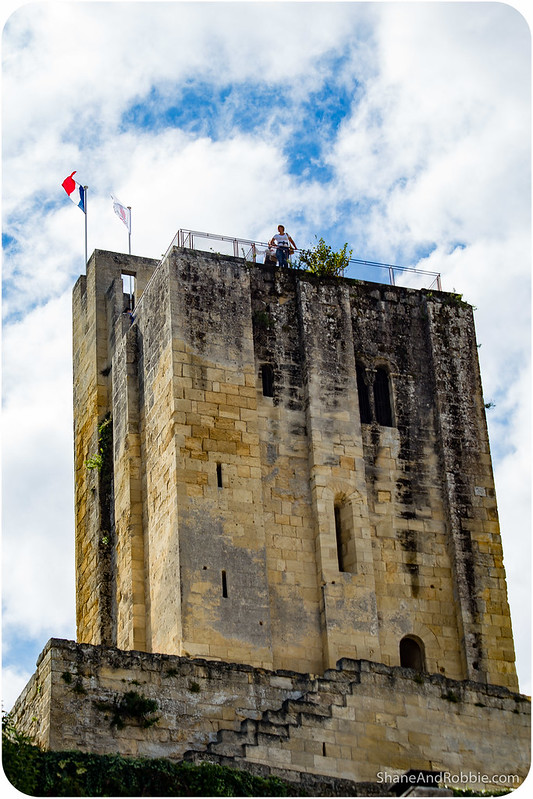 We chose to climb the 13th century Tour de Roy (which is all that remains of a fortress that once stood there), and were rewarded with some pretty awesome scenery. 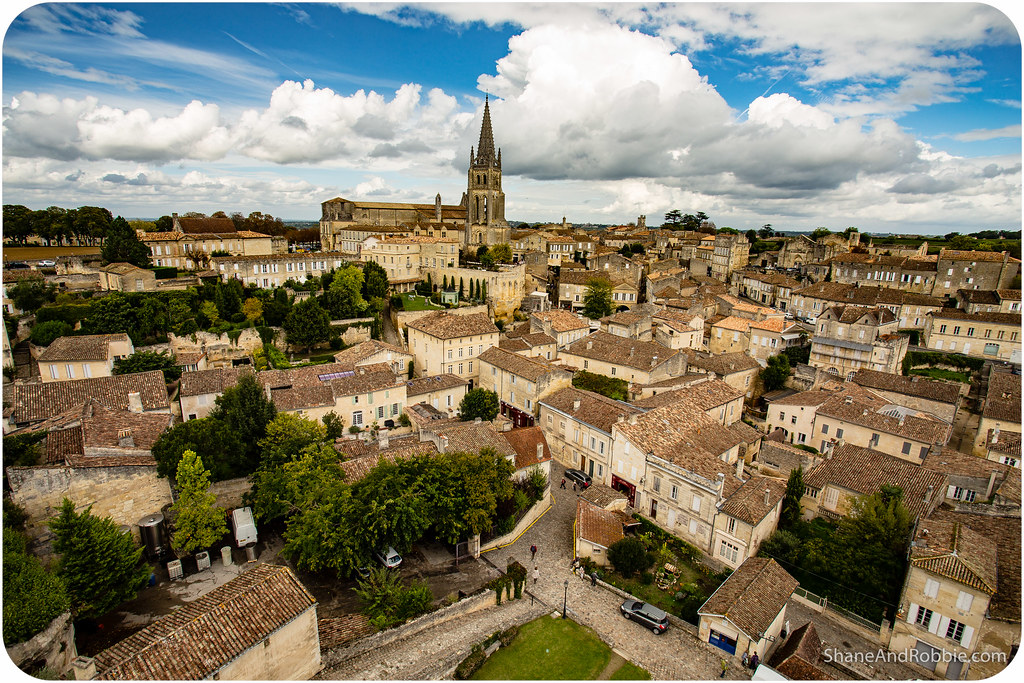 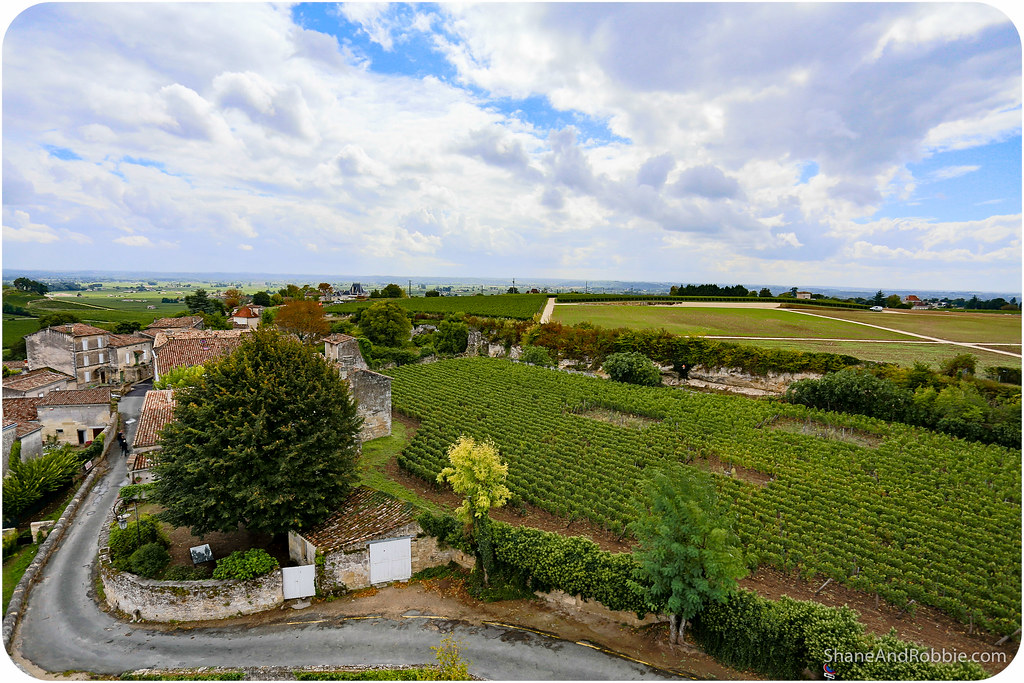 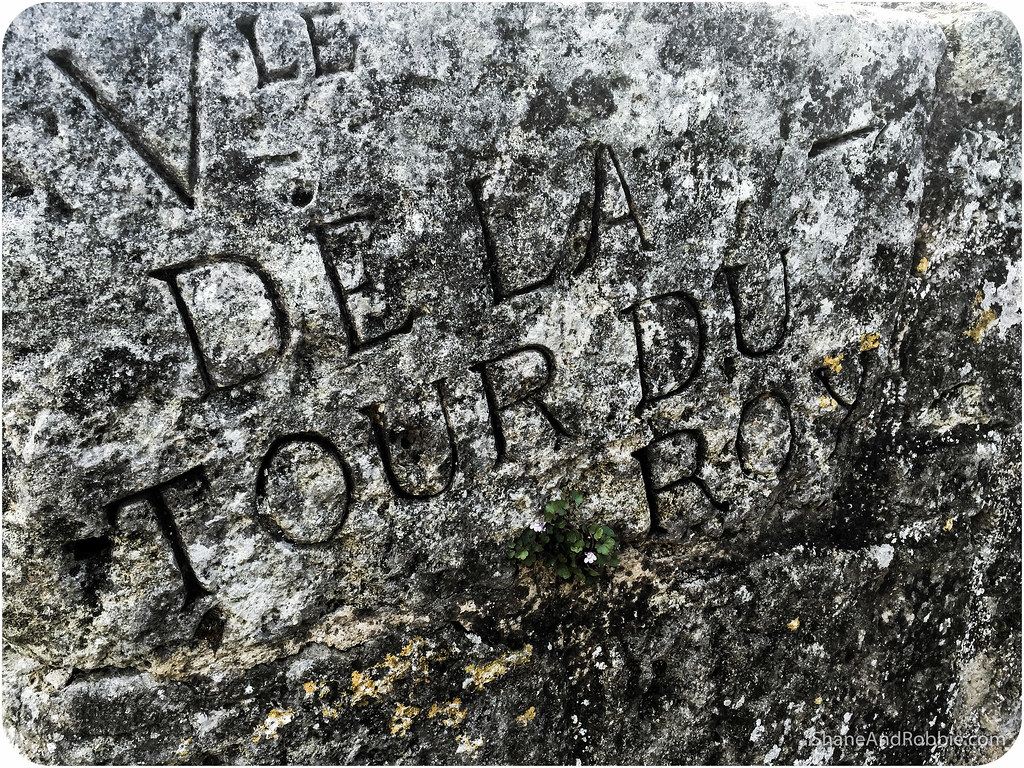 After losing ourselves down a few more laneways and streets, we decided to stop in of the town’s many cafés for a drink and a snack of canneles. These small cakes are traditionally made in this region, using the egg yolks left over from wine making*.

*Egg whites were once used to remove tannins and other “impurities” from wine, the proteins within the albumin capturing the impurities as they moved through the barrel. This left a lot of egg yolks and, so as not to waste them, a local baker came up with the recipe for sweet, rich canneles. 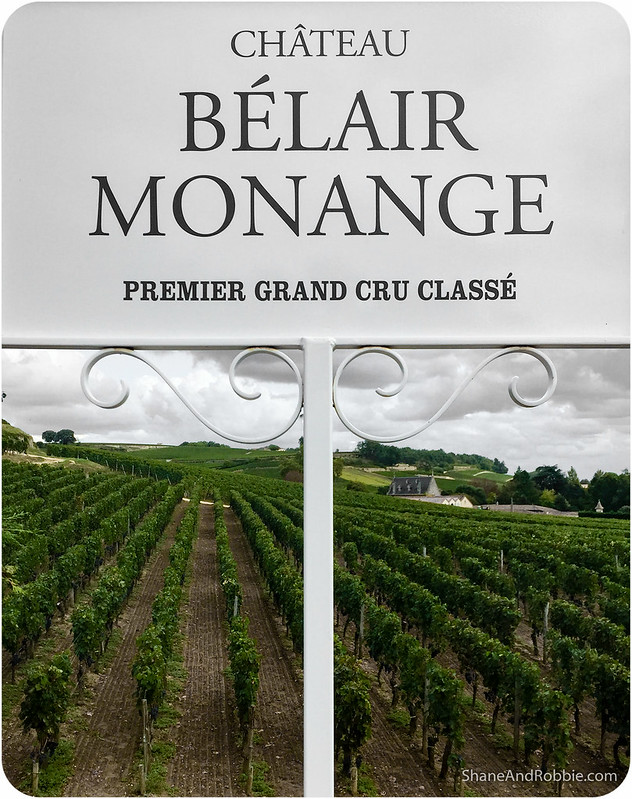 Before heading home we stopped in at a few places for a taste of the local Merlots, which is what St Emilion is especially famous for, but decided against buying any as carrying around a carton of wine doesn’t really suit our travelling style. That and we’re not really into wine. Still, even if you’re not a big wine buff, there’s enough history and scenery in St Emilion to make it a worthwhile day trip from Bordeaux. 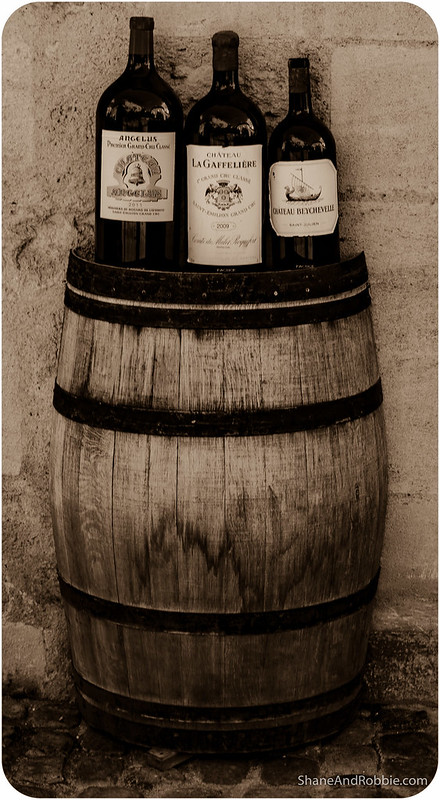 A quick train ride home and we were soon back in Bordeaux, where our last night in Dordogne was spent strolling the streets and enjoying another marvellous meal out and about. Tomorrow we’re leaving this wonderful corner of France and heading North, straight to the capital. That’s right, ladies and gentlemen, tomorrow we’re off to Paris! 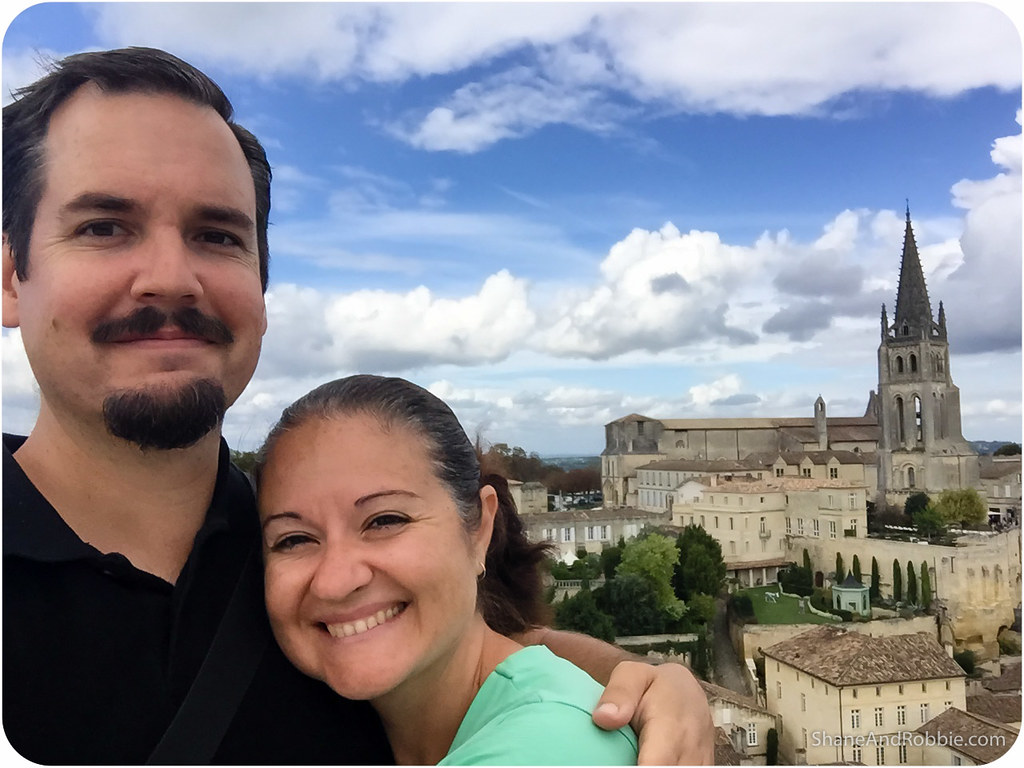