ON THE TRAIL OF CAMBODIA’S HISTORY IN PHNOM PENH

Cambodia has a long and fascinating history, and today we went walking around Phnom Penh to see some of the sights and learn a bit more about this country’s grand past. What we saw made us appreciate how great the Khmer Empire once was, and how proud the Cambodian people are of their history and heritage. 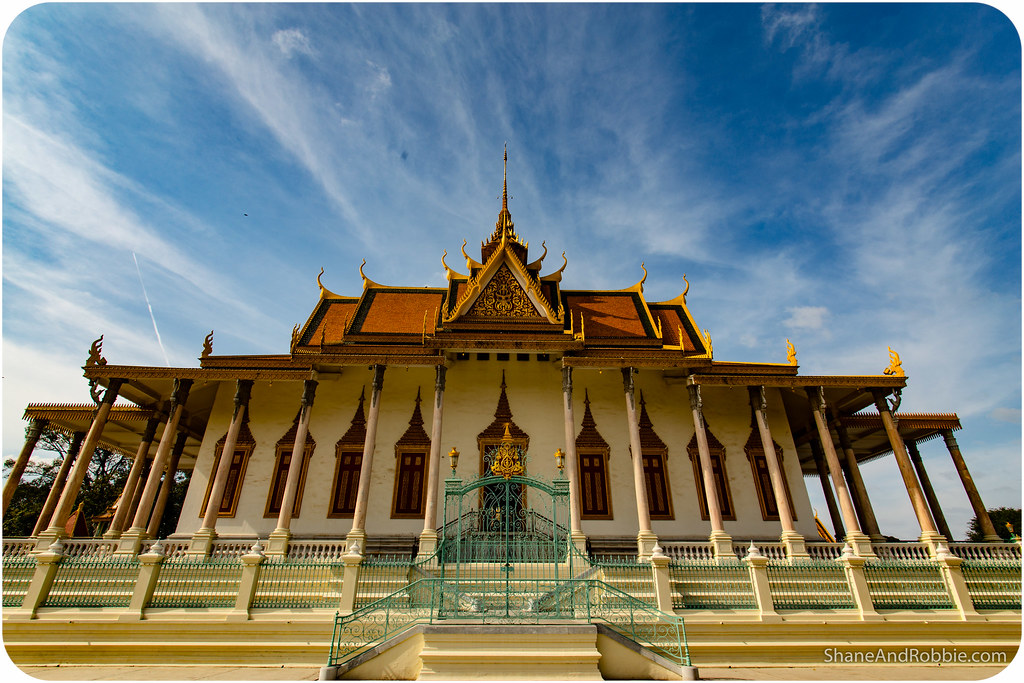 We woke this morning tired and grumpy after an interrupted night’s sleep, mainly thanks to the recurring power outages that happened last night*. The second time the electricity went out and the hotel’s back-up generator kicked in, our air conditioner got fried by the power surge, blowing up with a rather dramatic pop, bang, and puff of smoke. Needless to say it didn’t work after that and it got very warm very quickly – hence we’re tired and cranky now. Still, a strong cup of coffee and we were ready to hit the streets, keen to see the best of Phnom Penh.

*As we mentioned in yesterday’s blog: Cambodia is still very much a developing nation and public infrastructure (including electricity supply) isn’t the best. 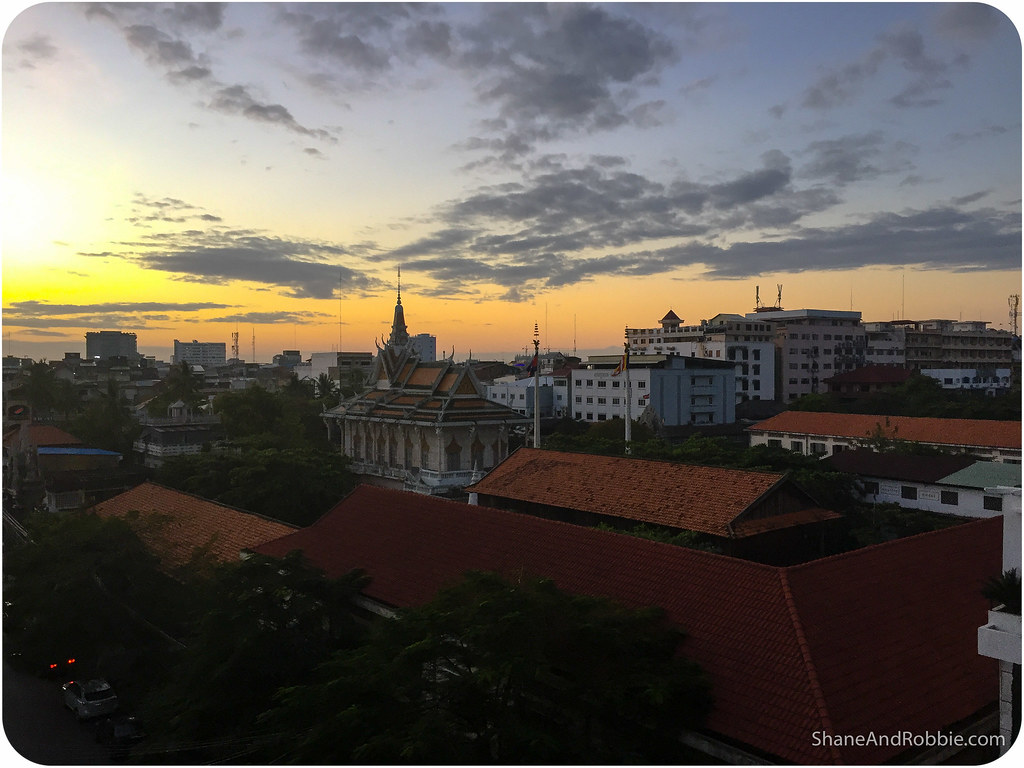 Phnom Penh is the capital and largest city of Cambodia (population: 2.2 million). Located on the banks of the Tonle Sap and Mekong Rivers, the city has been the national capital since the 15th century, and is today the nation’s economic, political, and industrial centre. There are a number of interesting cultural sites here too, including the National Museum of Cambodia, the Royal Palace, the Independence Monument, and the Silver Pagoda. We visited all of these today, starting with the National Museum. 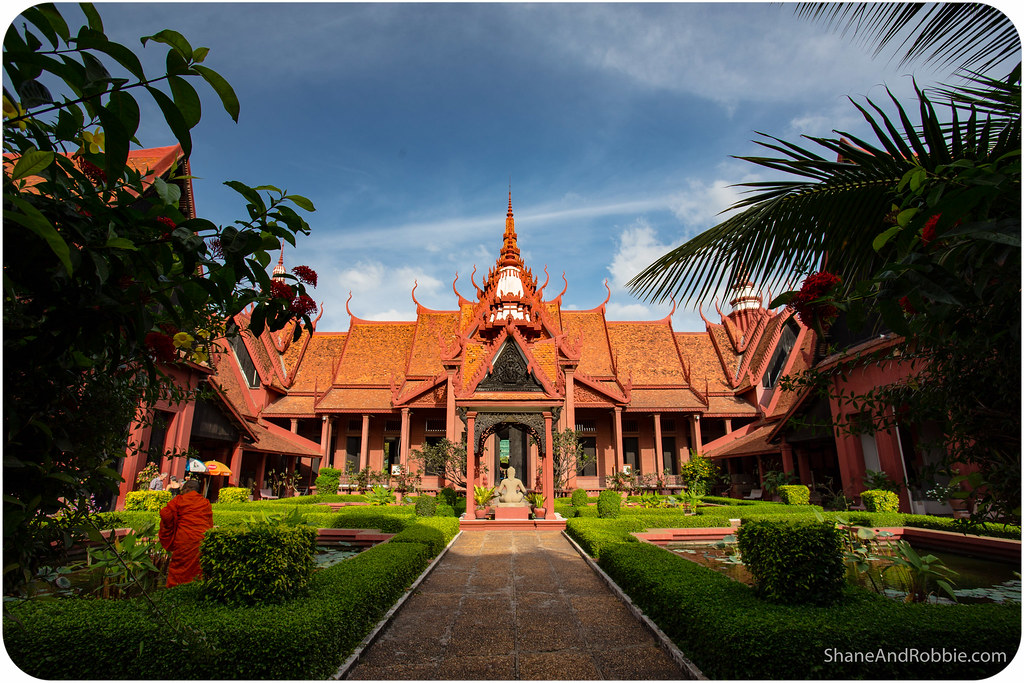 The National Museum of Cambodia is housed in a beautiful, traditionally-styled building in the centre of town and houses numerous artefacts from the years of the Khmer Empire. It’s not a big museum, but interesting in that it helps tell the story of this once great kingdom, which stretched from modern-day Thailand and Malaysia, to the Mekong Delta and the South China Sea. The origins of the Khmer Empire can be traced back to 802, when King Jayavarman II united the various factions and nations of South East Asia, and declared himself a god-king. This marked the beginning of an empire which flourished for over 600 years, and whose kings controlled much of Southeast Asia, accumulating immense power and wealth. Heavily influenced by India, the Khmer Empire built monumental temples in the capital city of Angkor and facilitated the spread of Hinduism, then Buddhism, to much of Southeast Asia. The National Museum housed a large collection of Khmer art dating back its glory days, including some great sculptures and jewellery (we couldn’t take any photos inside the museum, but trust us, they were very interesting artefacts). 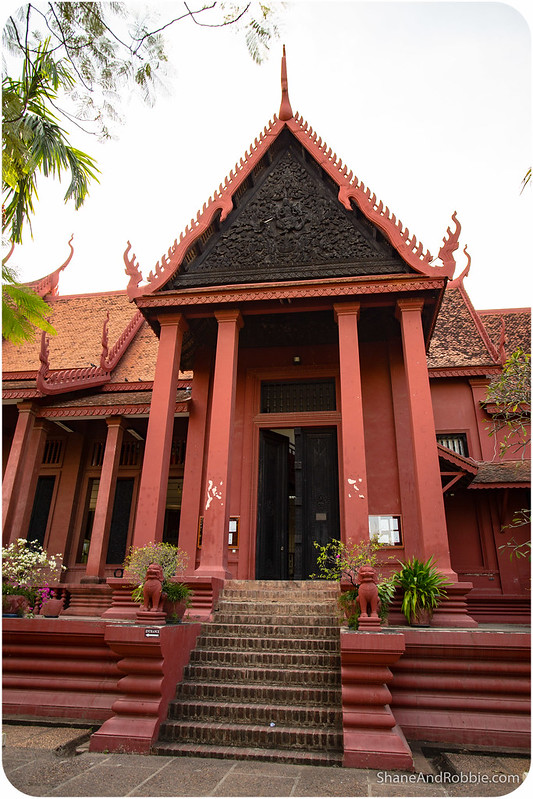 The Khmer Empire remained a significant power in the region until the 15th century, when it fell to Siamese (i.e. Thai) invaders. It was after the fall of Angkor that the capital was moved to Phnom Penh. When Angkor fell, many of the town’s intellectual, spiritual, and artistic elite were carried away by the Siamese and are believed to have seeded much of what we today known as modern Thai art and culture. Even with our limited understanding of both cultures, the relationship between Thai and Cambodian architecture was obvious even to us. 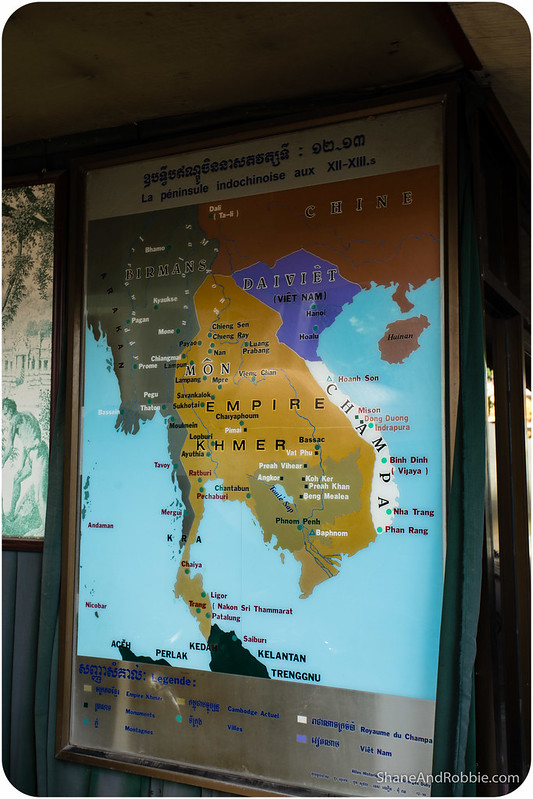 After the fall of Angkor to the Siamese in the 15th century, Cambodia was ruled in turn by its ever-more powerful neighbours: the Kingdoms of Siam and Vietnam. The ultimate invasion, however, came in 1867 when the French incorporated Cambodia into their colony of Indochina. Under French rule Phnom Penh came to be known as the “Pearl of Asia” and was considered one of the loveliest cities in French Indochina. Today few of those French colonial buildings remain, and the city is more chaotic than charming; but still the French influence remains, with cafés and bakeries on many street corners. Cambodians fought for independence and, in 1953, became a free constitutional monarchy under King Norodom Sihanouk. 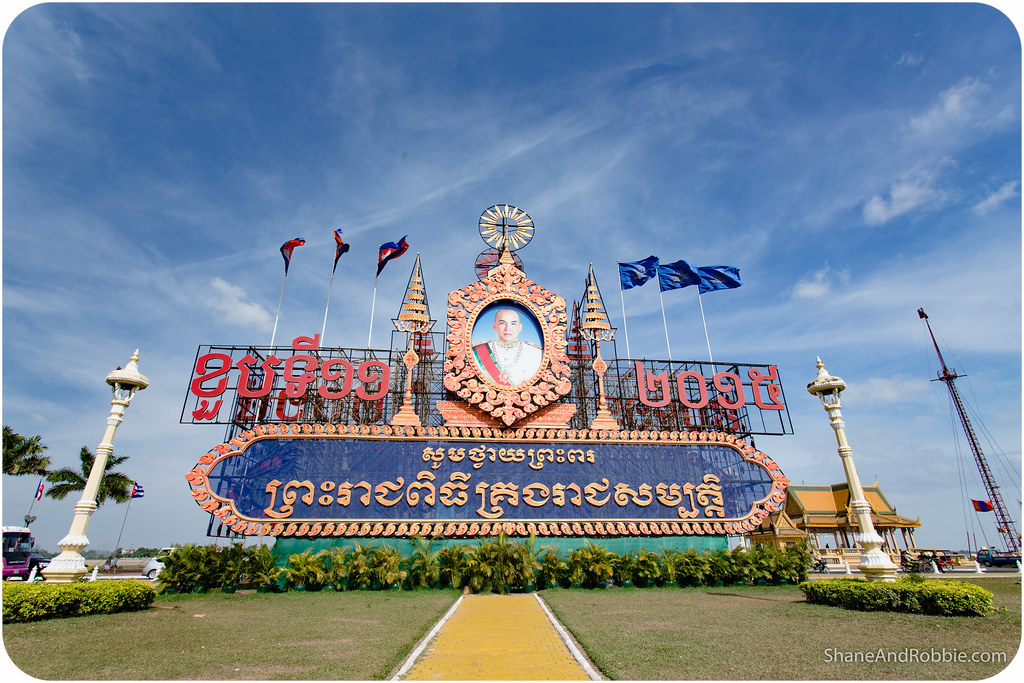 The Royal Palace in Phnom Penh was built during the 1860s, with funds generously donated by the French government. It remains the residence of the King of Cambodia and was just stunning, with the main throne room especially being a stunning example of Cambodian architecture. 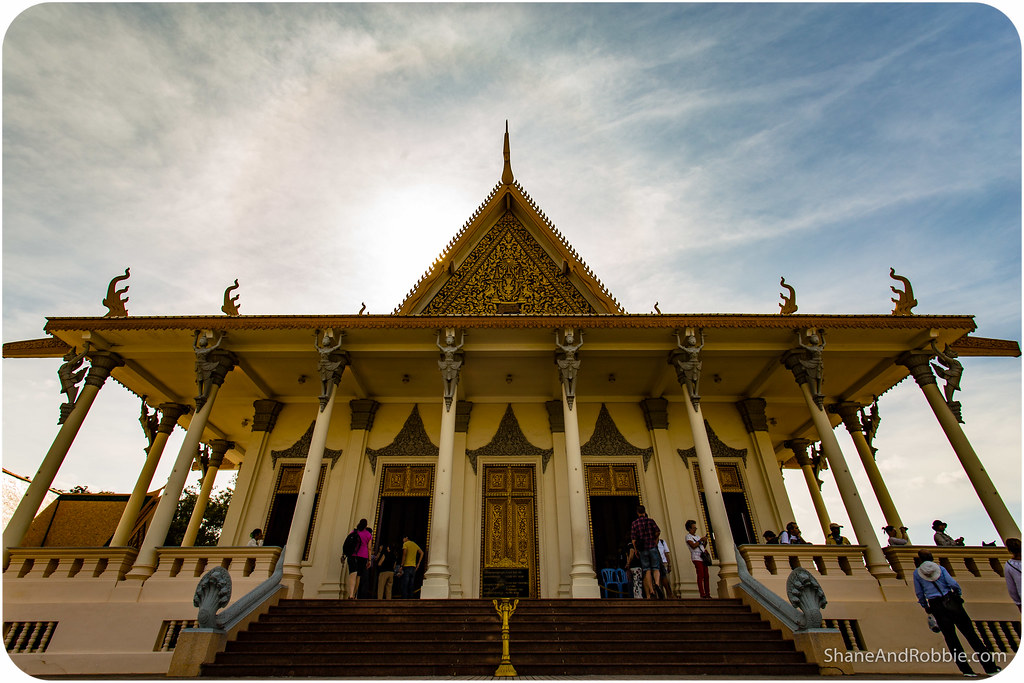 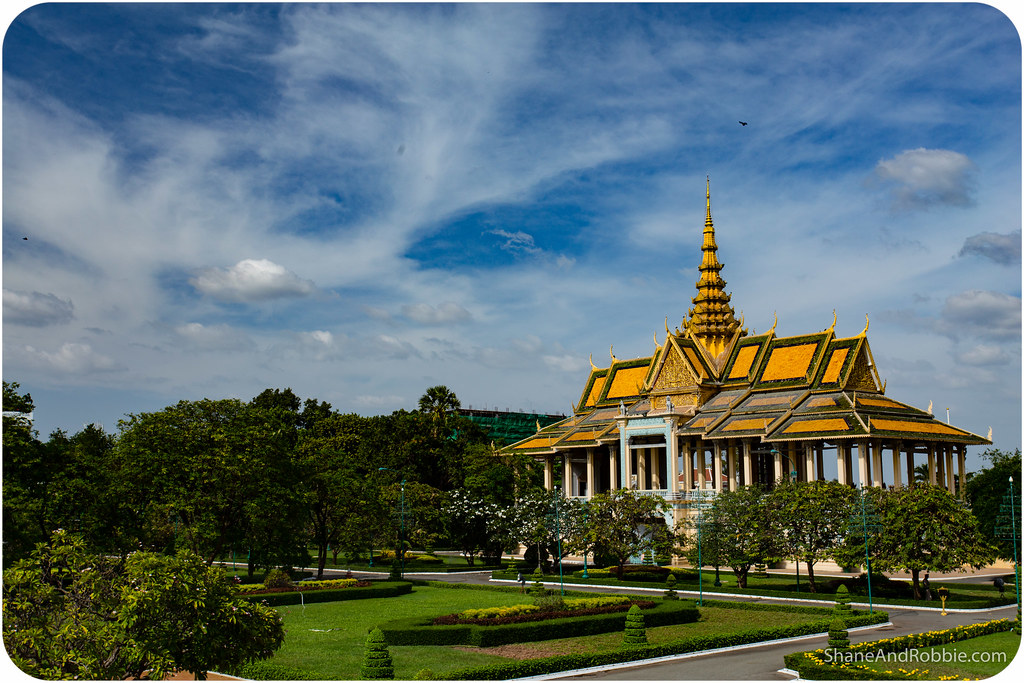 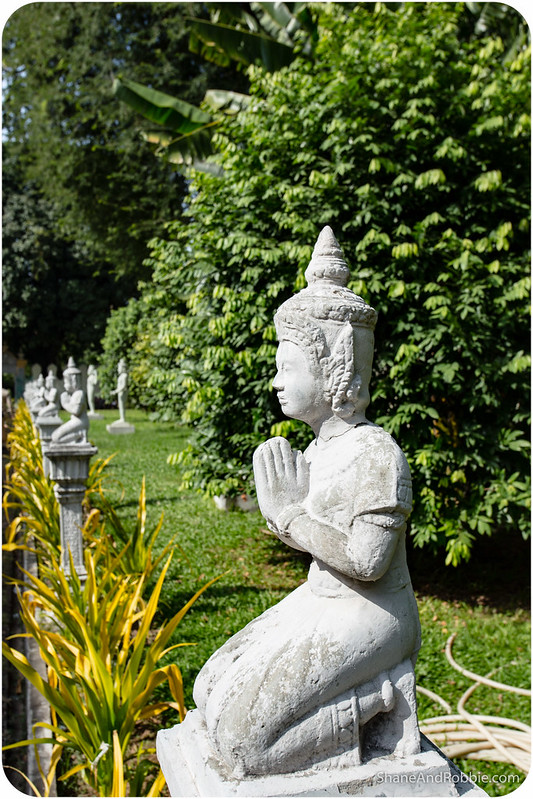 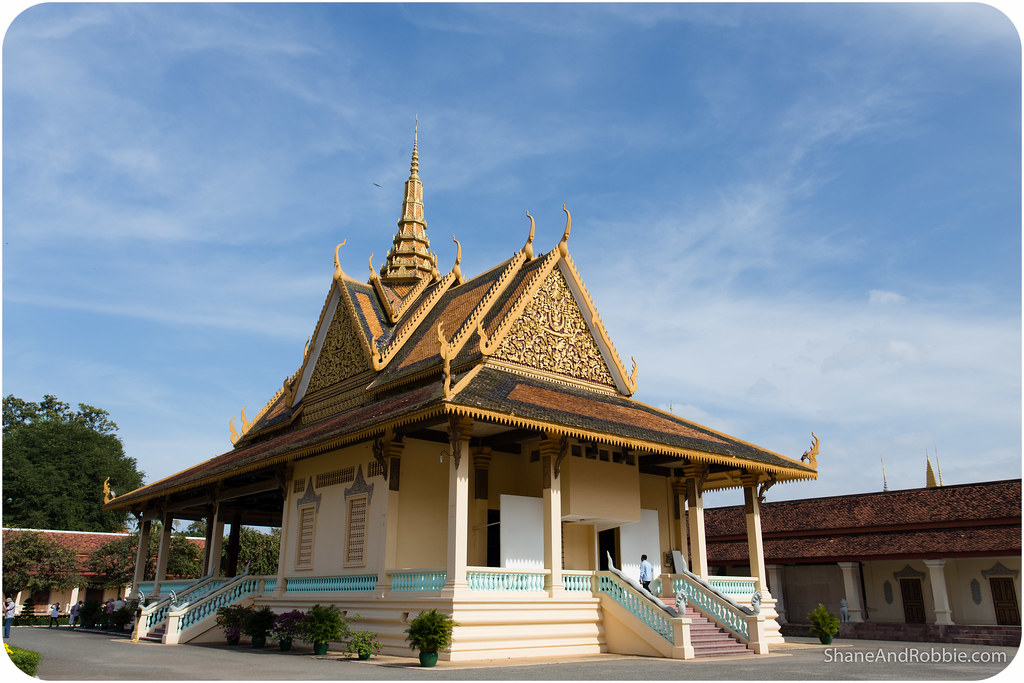 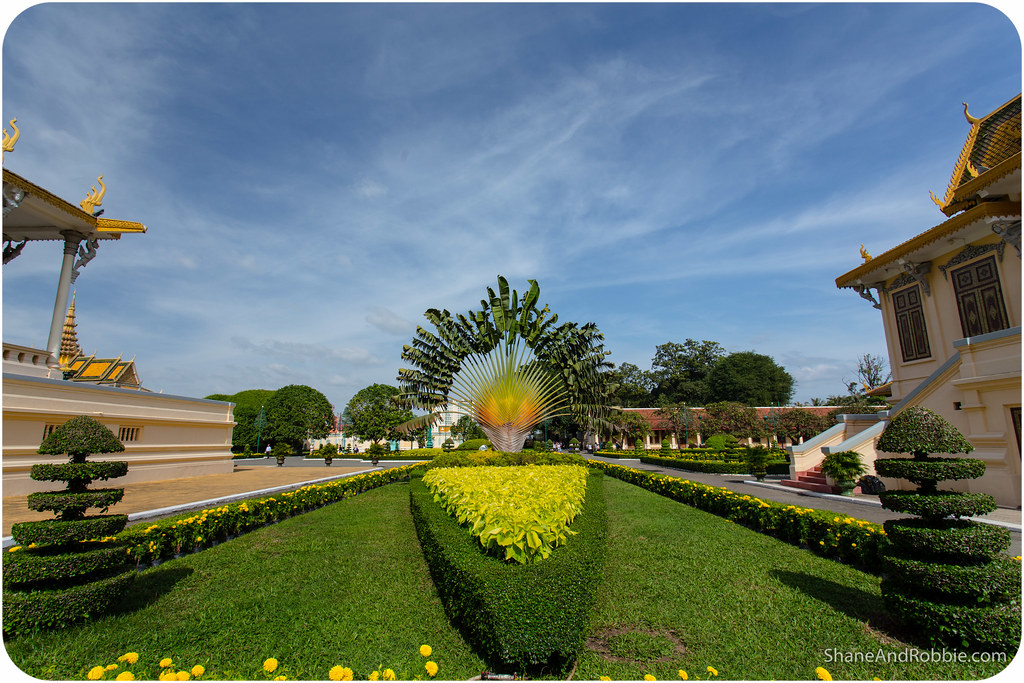 Not all the Royal Palace is open to visitors, but the parts that are were very grand and imposing. The landscaped gardens and various pavilions made for a great bit of touristing, though the contrast between the splendour of the palace and the poverty of the street kids and beggars on its doorstep was a little confronting. We’re just not used to seeing such a big gap between the rich and the poor* – and boy is the gap here HUGE! We’ve seen Bentleys and Rolls Royces driving around, in a country where the majority of the population lives off less than $1USD per day. It’s not a phenomenon unique to Cambodia, but it is a difficult one to stomach.

*Statistics show that 15% of the population here is classified as “rich” or “very rich” (i.e. can afford a palatial manor, fancy cars, servants, overseas schooling for their children, etc); 10% are considered middle class (i.e. can afford a brick home, a motorbike, and additional tuition for the children, beyond the basic education provided by the government); and the rest are considered “poor” or “very poor”. That’s VERY different to Australia, where the vast majority of the country lives a comfortable middle class lifestyle.

Beside the Royal Palace (and covered by the same 25,000 Reap entry fee), is the Silver Pagoda, a temple built for the royal family. The temple complex includes a central temple which houses a number of gold and jewelled Buddha statues, as well as a number of smaller pavilions and stupas. 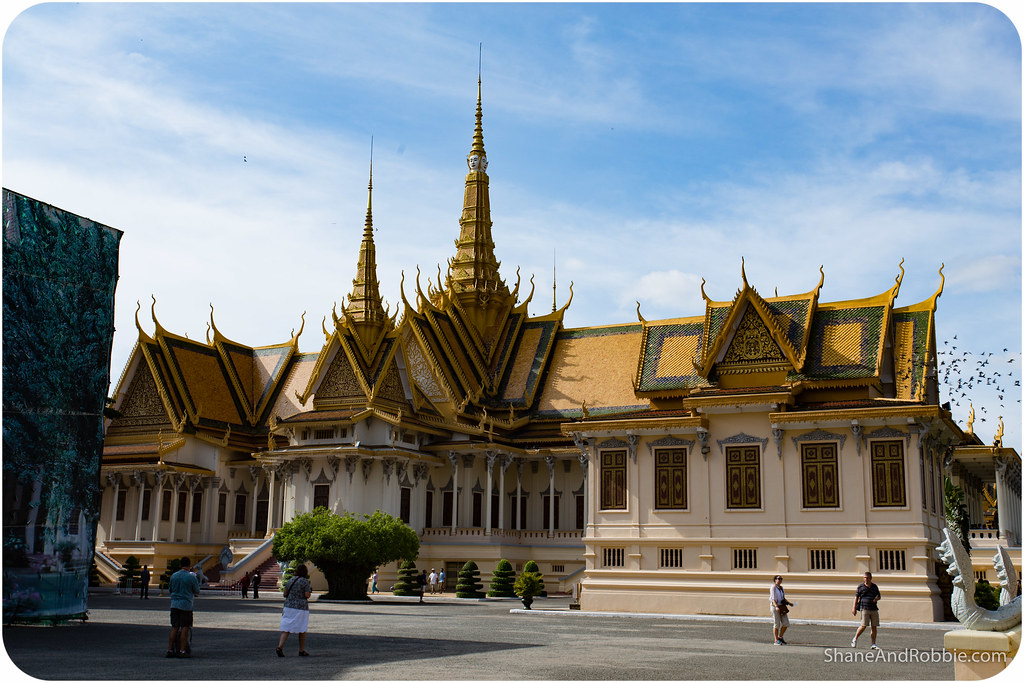 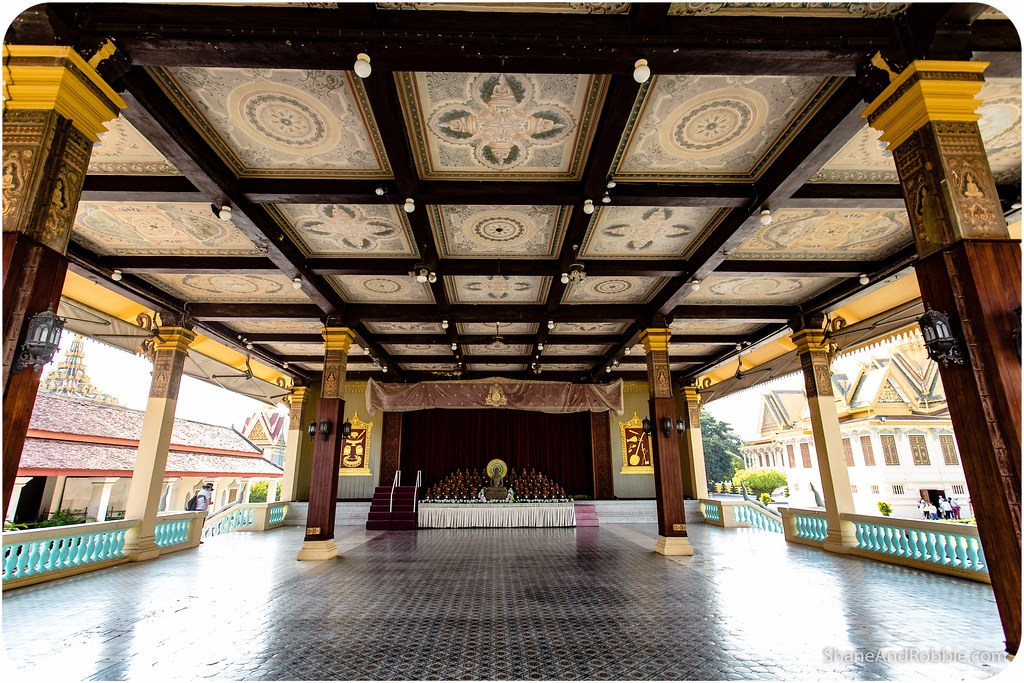 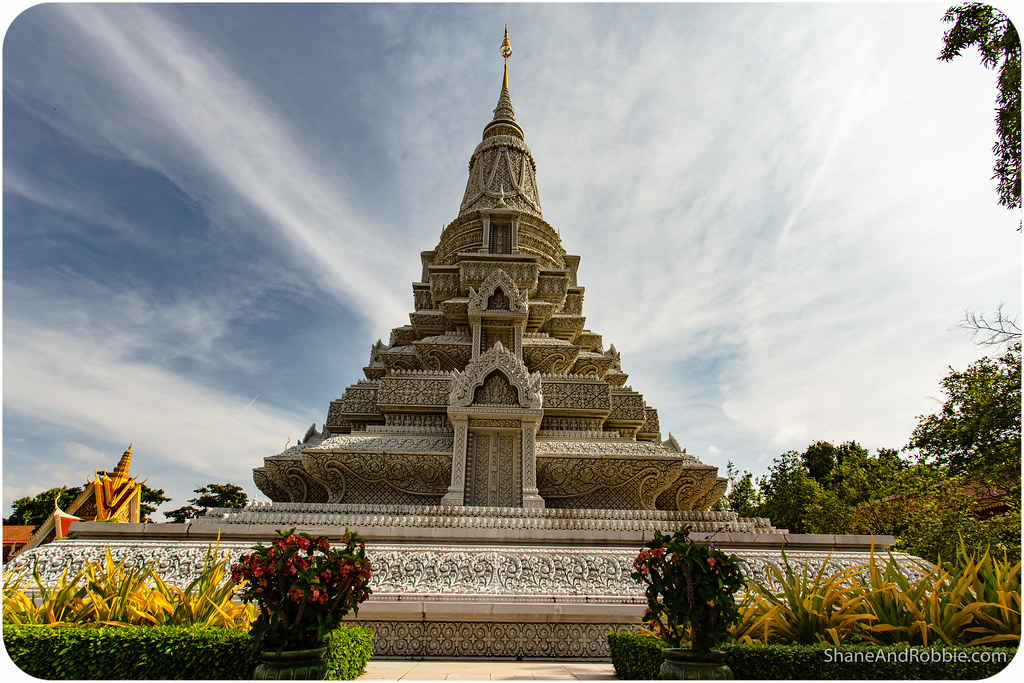 The stupas were built as memorials for the deceased kings of Cambodia, including the much-loved monarch Norodom Sihanouk who ruled during the years Cambodia fought and gained independence from French colonial rule. 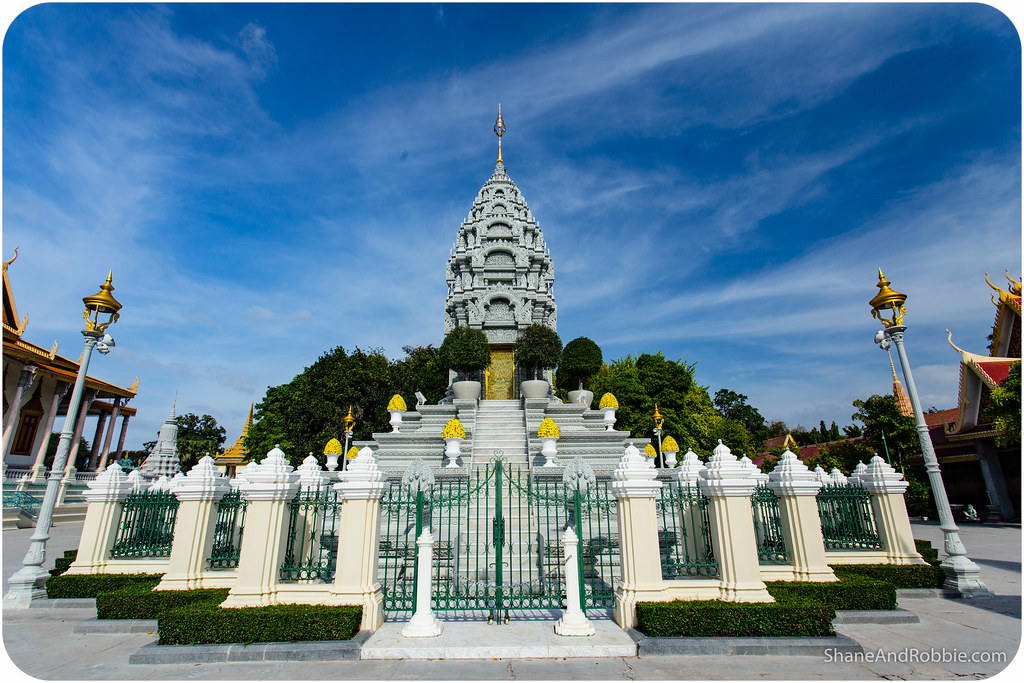 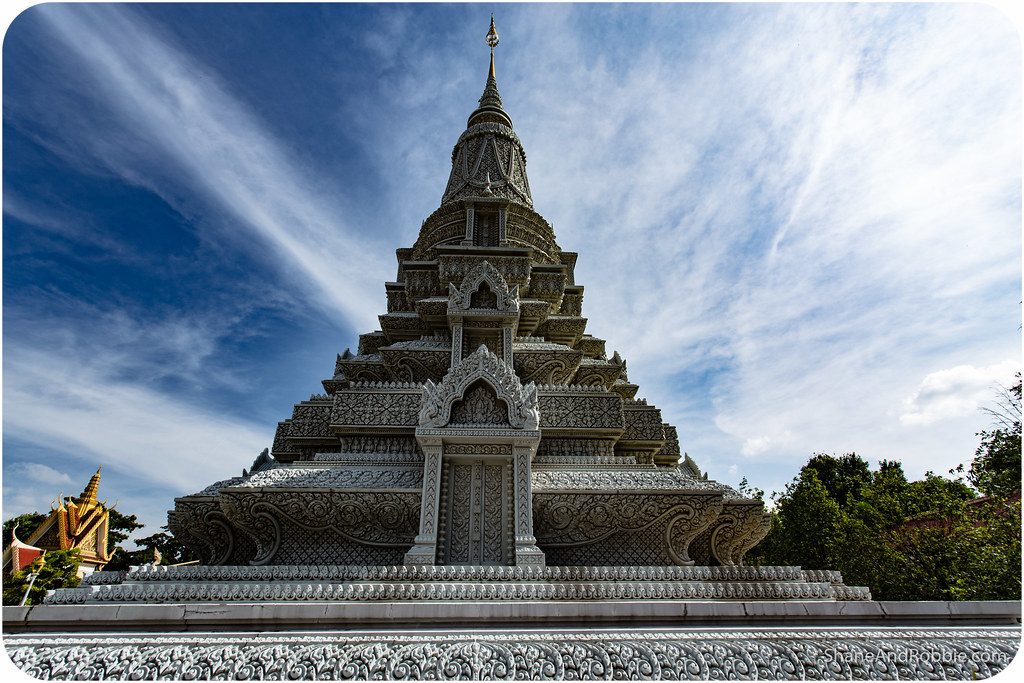 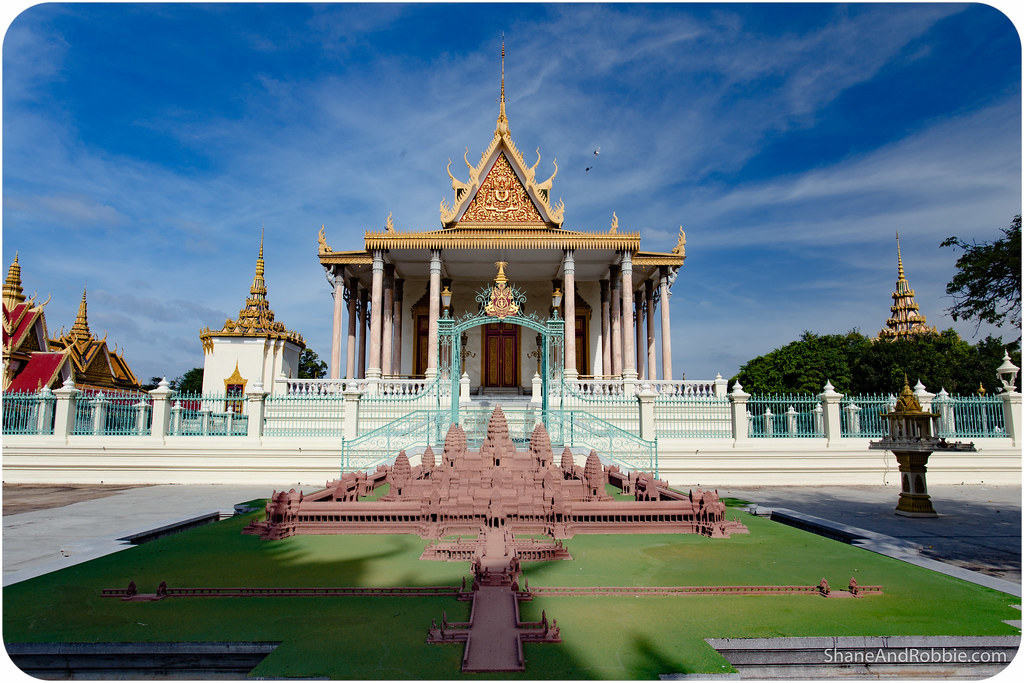 So revered was Norodom Sihanouk that millions turned out for his funeral in 2012 and a statue was built in his honour in front of the grand Independence Monument, which we also saw today. The striking monument was built to mark the advent of the country’s independence in 1953 and is distinctly Cambodian in architectural style. 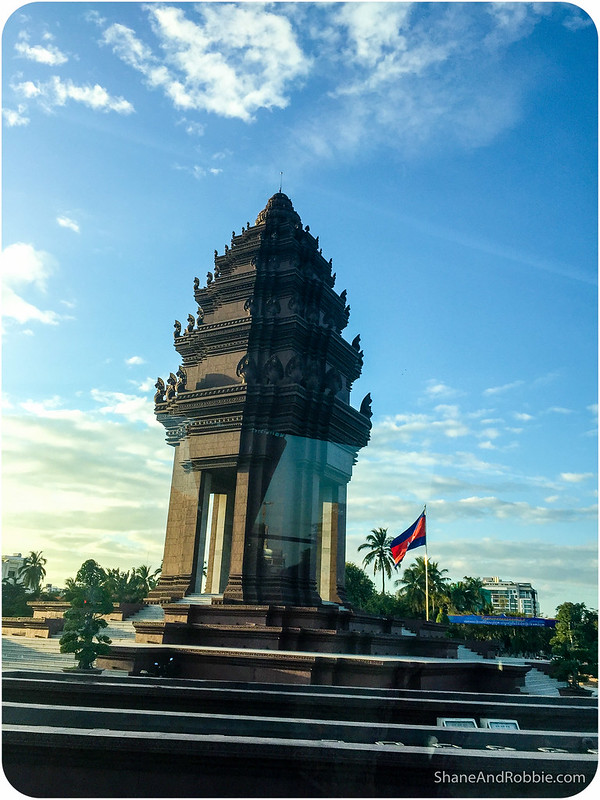 We ceased our tour through Cambodia’s history at the Independence Monument, knowing that tomorrow we will be once again picking up the thread when we visit Tuol Sleng Museum and the Killing Fields. Both these sites are linked to Cambodia’s tragic and turbulent years of civil war, and will no doubt be emotional places to visit. For today though we got a great overview of Cambodia’s past and saw some of the best of Phnom Penh. 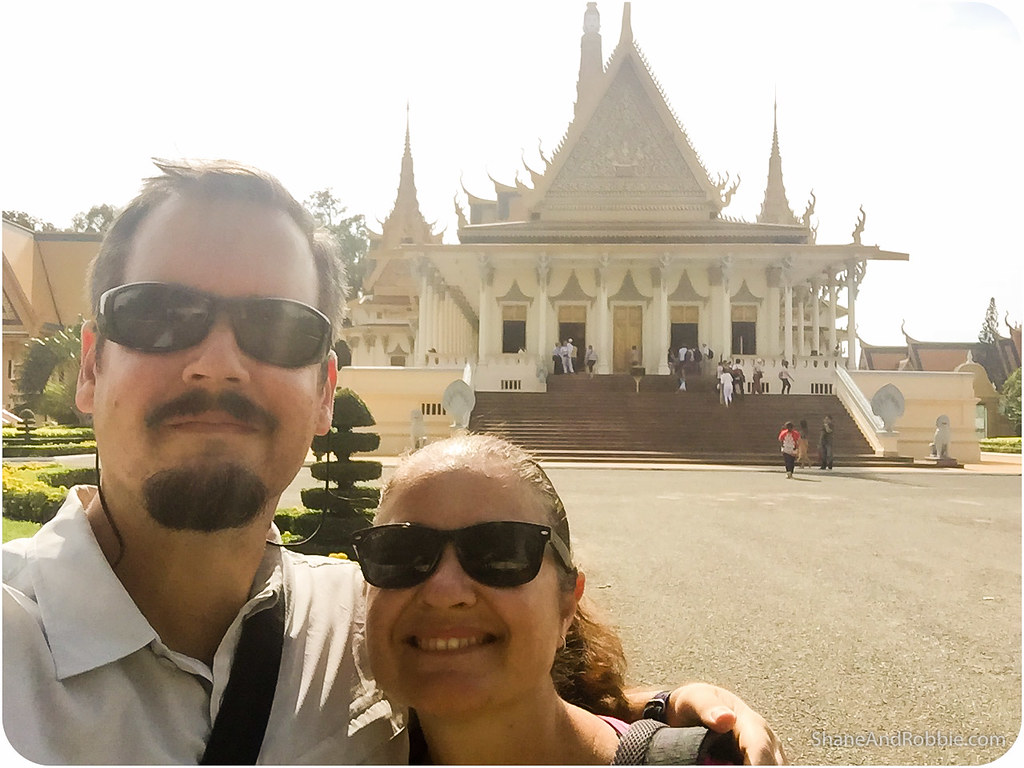