Insects deliver more protein and nutrition per kilogram of weight than beef, chicken, pork, or fish; and farming them is far less damaging to the environment that farming large livestock. According to some experts we should all be eating them, so today we had a go at munching on some deep fried Cambodian spiders*. The spiders we nibbled were deep fried with salt, chilli and garlic, which made them very tasty and crunchy, but can’t say we’ll be rushing back for more!

*Or at least just the legs. Neither of us could stomach the thought of biting into the fat, juicy abdomen of a spider – though a couple of the guys in our group had a good chomp on the whole thing. The verdict? Spider legs are manageable, their bodies pop and ooze and are disgusting. Not surprising given the abdomen contains all the organs, eggs, and possibly a good dose of excrement too!

We stopped at a spider snack shack in the village of Skuon on our drive from Phnom Penh to Siem Reap today. Fried insects are a delicacy in Cambodia, with crickets and grubs eaten alongside the giant* tarantulas that live around here.

*These guys are BIG – even for us Aussies, who are used to big furry arachnids, these guys were alarmingly large. Think the size of your palm (and bigger).

The custom of insect eating dates back 600 years, to the final years of the Khmer Empire when drought and food scarcities caused widespread famine. Today it’s as much a touristy gimmick as it is a culinary custom, with Skuon village famous for its tarantula farms that supply eateries all over the country with tasty arachnids.

Skuon is about 90 minutes drive North of Phnom Penh, on the Cambodian National Highway #6, which connects the country’s capital with the second biggest city: Siem Reap. We’re going to Siem Reap to see Cambodia’s most famous site: the ancient Khmer capital of Angkor. It was a long drive there though, with the 240km drive taking us about 8 hours (including our spider snack stop and a lunch stop).

The drive takes so long because, not far out of Phnom Penh, the roads are no longer sealed and they’re pretty bumpy and incredibly dusty. We drove through villages where EVERYTHING was coated with a thick layer of red road dust due to the passing traffic. A few homes had washing hanging out to dry in their yards, which seems like a recipe for disaster as the clothes would be stained red in no time!

Most of the villages we passed on our drive were very basic, with no running water or electricity supply. Most of the homes were wooden, with the poorest ones having walls made simply of thatch. Wealthier families had wooden houses, and the wealthiest brick homes with generators and large rain water tanks.

Often the road was lined with rice paddies, with the current crop grown tall and almost ready for harvest. There were lots of coconut palms as well, and the ever-present pools and rivers of water. There is just SO MUCH water in Cambodia – the whole nation is like one huge, flat flood plain, just waiting to be filled every wet season (April to September).

Earlier in the day we passed a number of Buddhist monks and novices, resplendent in their saffron robes and calling from house to house with their rice bowls begging for alms. Here in Cambodia, as in Laos, most families will send their sons to serve as novices in Buddhist monasteries for at least a year. During that time the boys get a religious education, but they no doubt also learn a valuable lesson in patience and humility as they’re entirely dependent on the generosity of villagers for food. Seems like an interesting way to instil ethics and shared morals into young men.

We stopped for lunch at the village of Kakaoh, where we visited a local silk weaving cooperative and got to see how silk is made from the earliest stages of hatching silk worms to making silk strands, then spinning, dying, and, finally, weaving the cloth.

Santuk Silk Farm was established by Amiercan Vietnam War veteran Bud Gibbons and his Cambodian wife Nevin in 2006 and employs 18 women from the village to weave the raw silk into thread. All silk products sold there are made by the local weavers on site and profits go directly to the weavers (who also get paid a retaining wage). The enterprise was set up as a way to help provide local women with income and skills and seems really ethically run. They have a restaurant on site too and lunch, though very simple, was tasty and delicious (certainly tastier than fried spiders!).

Our drive continued for another few hours after lunch, with more rural scenery flitting past our windows. We even saw a number of families harvesting hay to feed their cows during the up-coming dry season (October-March).

As the afternoon wore on and school finished for the day we also started seeing lots of children playing by the side of the road. The sheer number of teenagers and young children you see everywhere here is a poignant reminder that, thanks to the horrors of the Khmer Rouge/Pol Pot regime, almost 50% of Cambodia’s population is under 20. There are also very few old people around*, which must be hard for a culture where extended families were once the norm. We wonder who looks after the children if there are no grandparents left?

*Less than 10% of the Cambodian population is aged over 60 – most of that generation were killed during the genocide.

Sunset at the moment is quite early (around 5:30pm), so we got to see the sky painted golden orange as we were pulling into Siem Reap. It was a gorgeous sunset, and a lovely end to a long day’s driving. 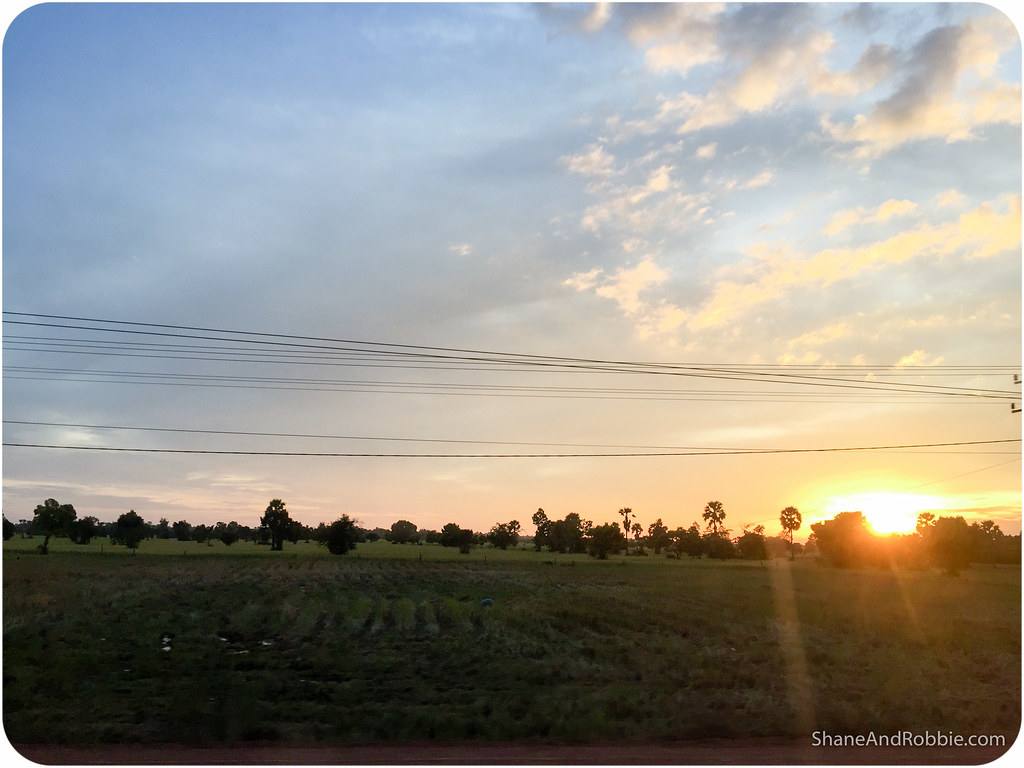 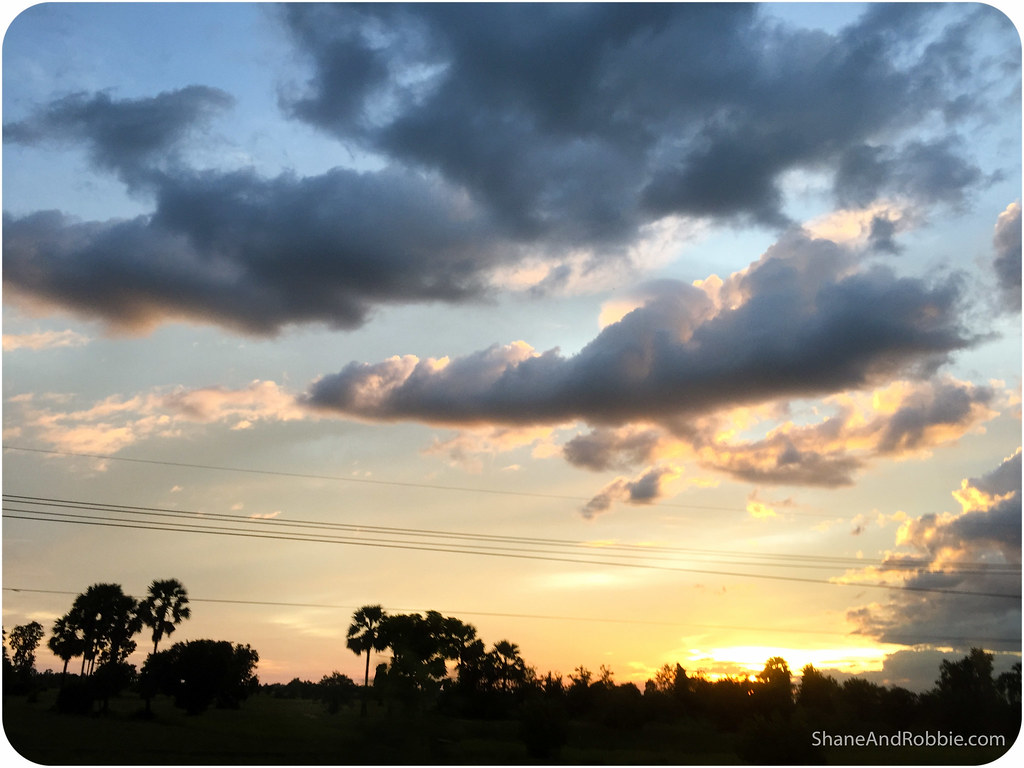 We’re here in Siem Reap, in the North-West of Cambodia, for 3 days. This bustling town was a tiny provincial village just 15 years ago, before the international tourist market took off and turned it into the tourism capital it is today. More than 4 million people came to Siem Reap last year, all of them keen (like us) to explore the wonders of Angkor, which is just 20 minutes’ drive outside of town. For tonight though, our only priority is food (not spiders), shower, and bed. Tomorrow we’ll venture out to see why Angkor is so damn popular!