We spent our final day in Siem Reap exploring the floating villages of Tonle Sap Lake by boat, then soaring over the jungle temples of Angkor in a helicopter. It was AWESOME! 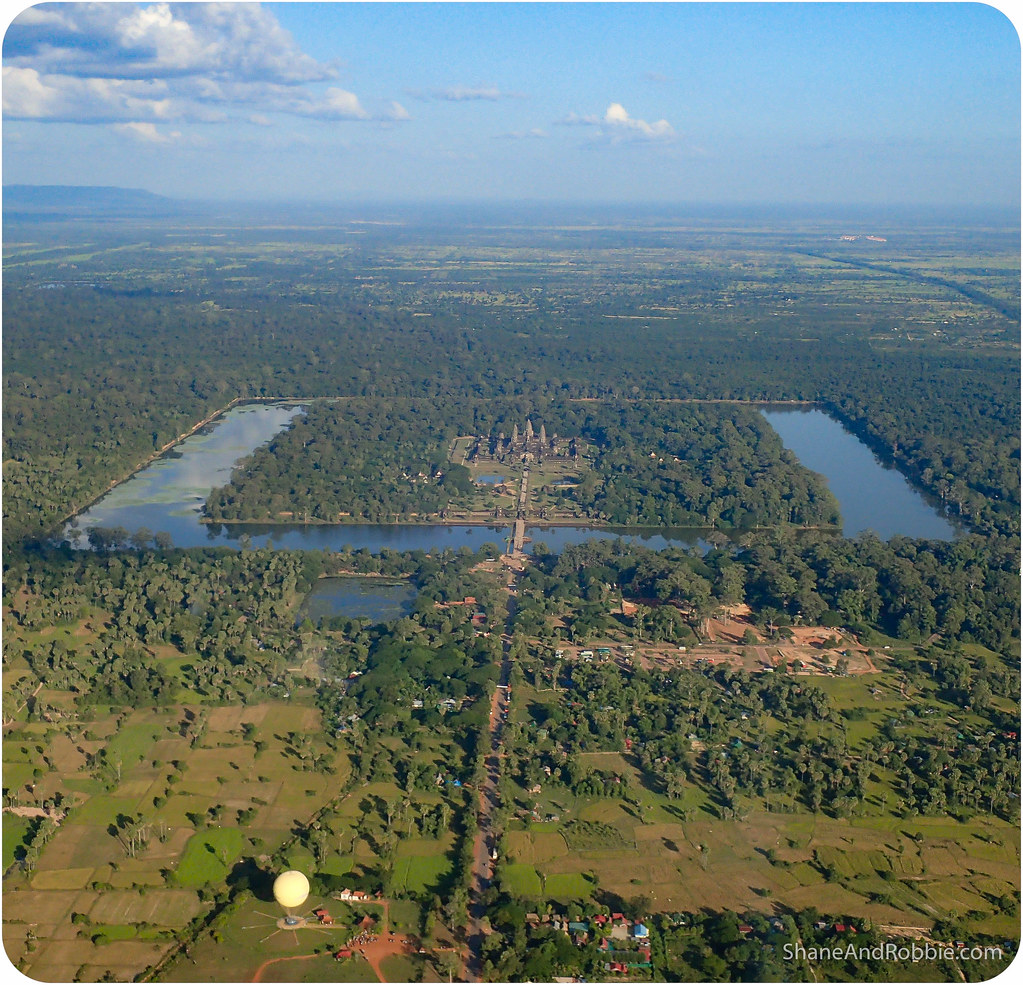 Cambodia is a land defined by water – but not the salty expanse of the ocean*; rather the vastness of Tonle Sap Lake. Occupying an immense geological depression in the centre of Cambodia, Tonle Sap is the largest freshwater lake in South East Asia and one of the richest inland fishing grounds in the world. Nearly half the fish consumed in Cambodia come from this freshwater lake, and the rich soil around it provides fertile soils for growing rice and vegetable crops.

*Though the country does have a small (and apparently quite pretty) coastline which faces out onto the Gulf of Thailand. 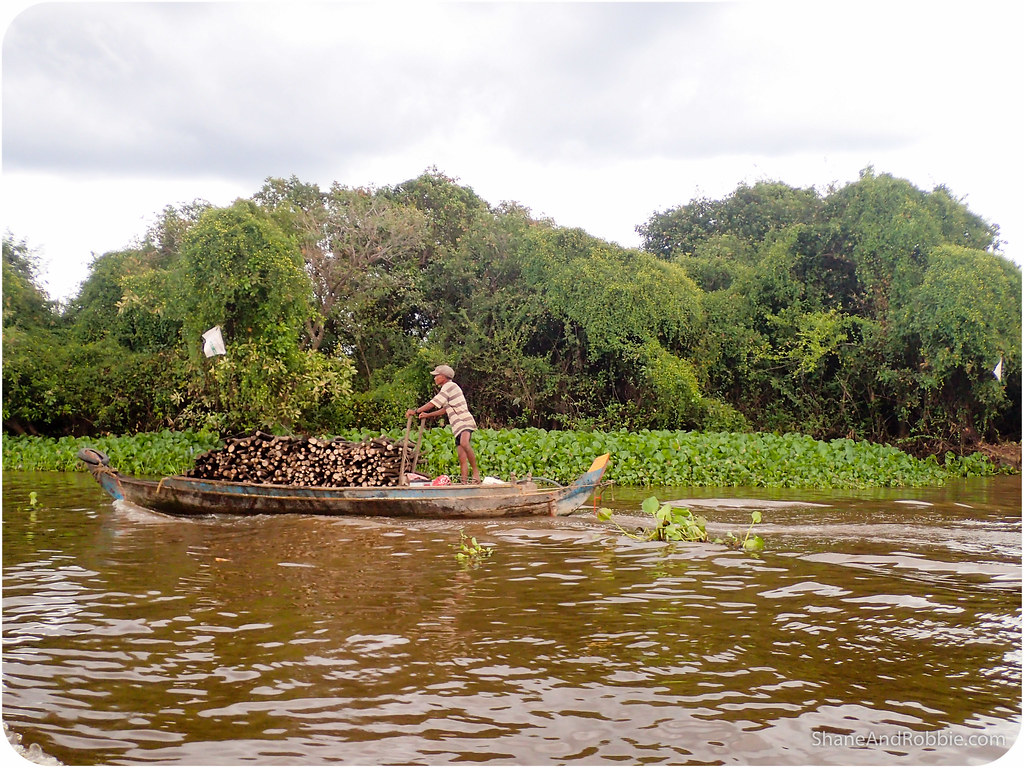 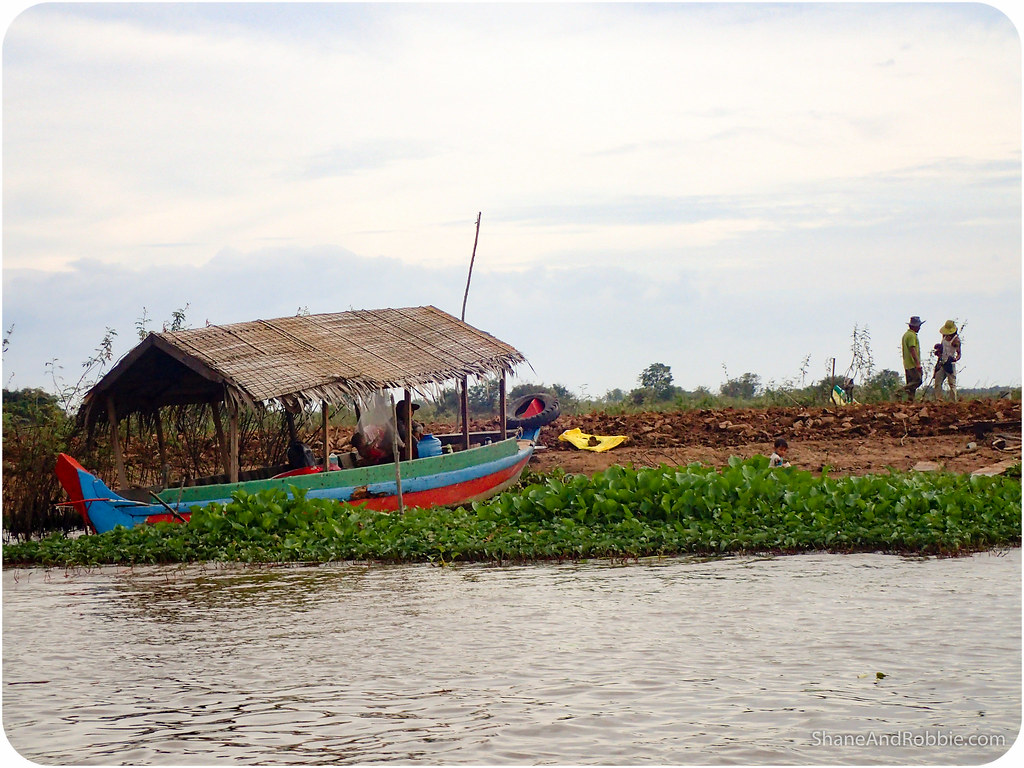 The lake is also an important ecological site, providing a home for over 300 species of fresh water fish, as well as snakes, crocodiles, tortoises, turtles, and otters. More than 100 varieties water birds feed, nest, and breed around the lake; and the mangrove forests around the lake’s edge ensure generations of fish have a safe place to spawn. What makes Tonle Sap Lake truly unique is its huge seasonal variation in water levels.

Tonle Sap is seasonally inundated, with the Tonle Sap River carrying excess water from the mighty Mekong River into the lake every wet season. During the dry season the river reverses its course and carries water out of Tonle Sap lake into the Mekong. This extraordinary seasonal variation in flow means water levels in Tonle Sap vary dramatically during the year: in the midst of the monsoon (i.e. around August/September) the lake reaches an average depth of 14m and covers almost 10,000 square kilometres, whilst in the driest months (i.e. February/March) it’s as little as 2m deep and covers just 3,000 square kilometres.

To accommodate these vast changes in water level, families living along the lake’s shores have adapted their homes to either be on enormous stilts or to float on the surface of the lake. The so-called “floating villages” or “stilted villages” of Tonle Sap Lake are a great attraction of the area, and given the lake is just a short drive from Siem Reap, we decided to take a break from exploring jungle temples this morning and went cruising around the lake instead.

More than 2 million people inhabit the region around Tonle Sap Lake, 90% of them making a living by catching fish and, in the dry season, growing crops in the rich alluvial soils. These fishing communities have lived for centuries in harmony with the unique ecosystems of Tonle Sap Lake – their floating villages, towering stilted houses, and simple way of life are all deeply intertwined with the lake, and the cycles of rising and falling waters. 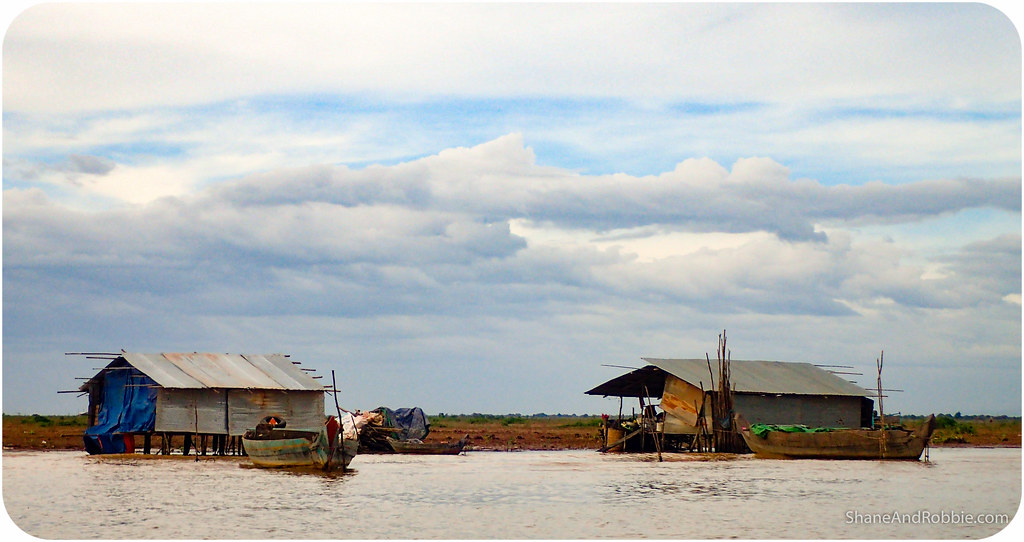 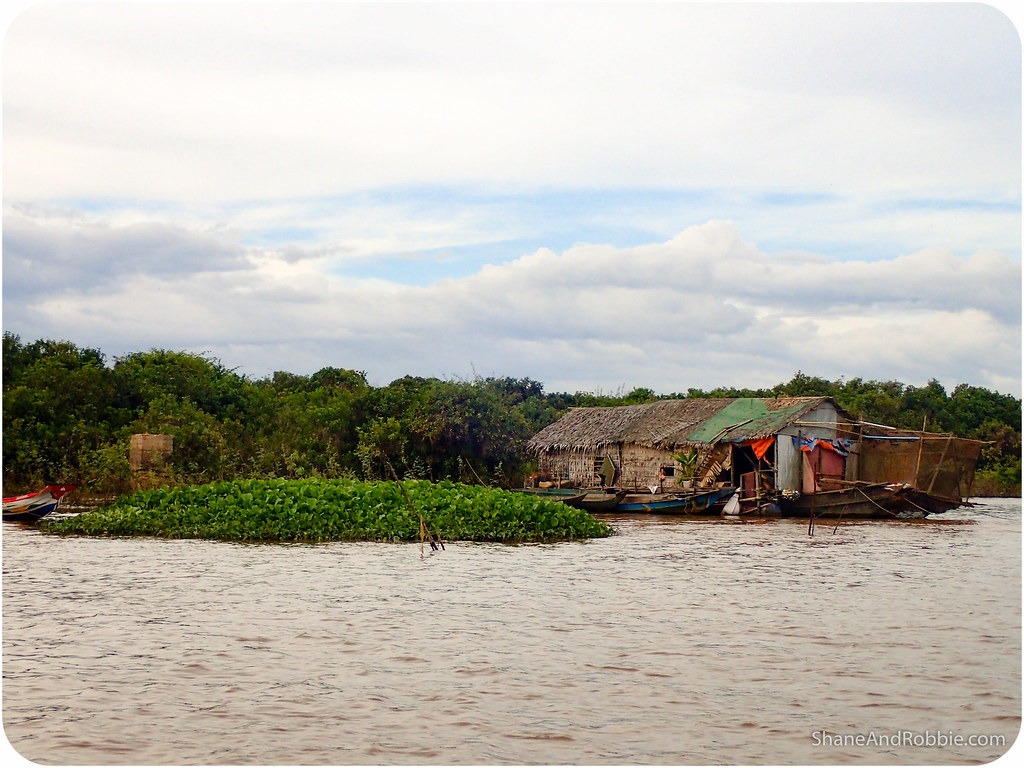 Unfortunately many of the floating and stilted villages closest to Siem Reap have become tainted by mass tourism, with little of the fishermen’s traditional way of life left. We had been pre-warned about this and so chose to go further afield instead, to the small village of Kompong Khleang.

Home to some 2,000 families, Kompong Khleang is a genuine fishing stilted village about an hour’s drive South of Siem Reap (far enough away to deter most of the 2-day package tourists). They only get a handful of tourists here every day* and as a result the locals didn’t seem to resent our presence there so much. Many of the children were gleefully waving at us as we passed in our small boat, and a few of the locals watched as we got on and off our boat, chuckling to see how much we struggled to negotiate the gang plank and find our “lake legs”.

*That is, they see about 50 tourists per day, as opposed to the thousands that flock to villages like Kompong Phluk and Chong Kneas, which are much closer to Siem Reap.

The lake’s water level at the moment is dropping, though it’s no where near it’s lowest point. From our boat, therefore, we were looking up at all the stilted houses of Kompong Khleang, marvelling at how tall the stilts were. 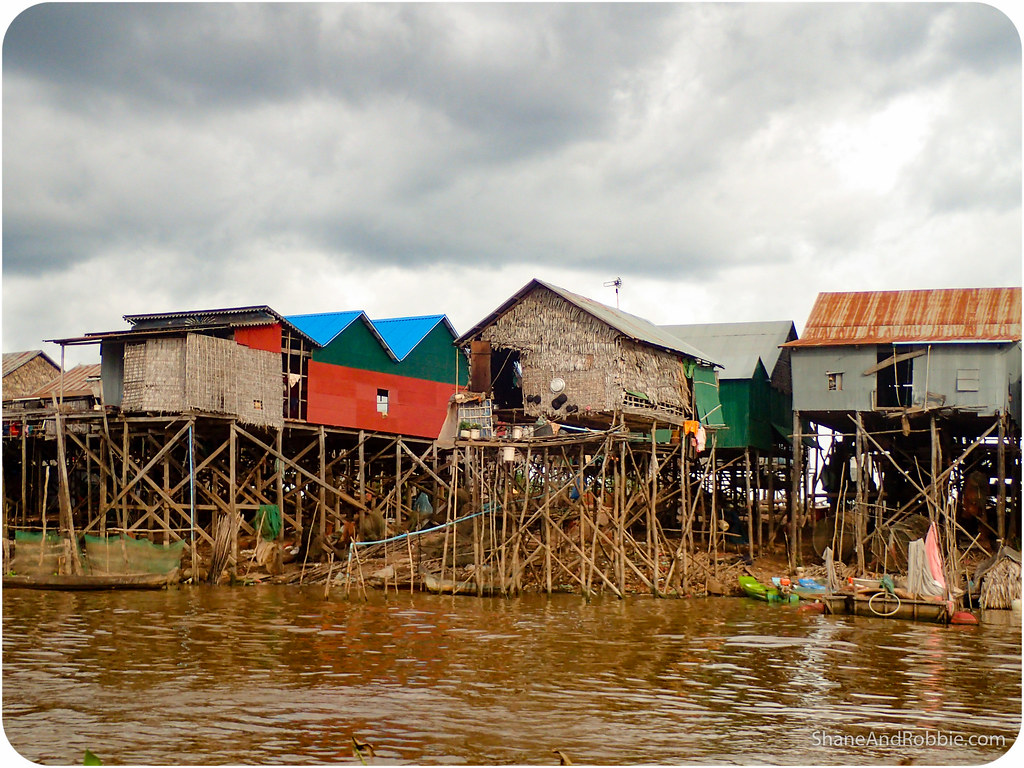 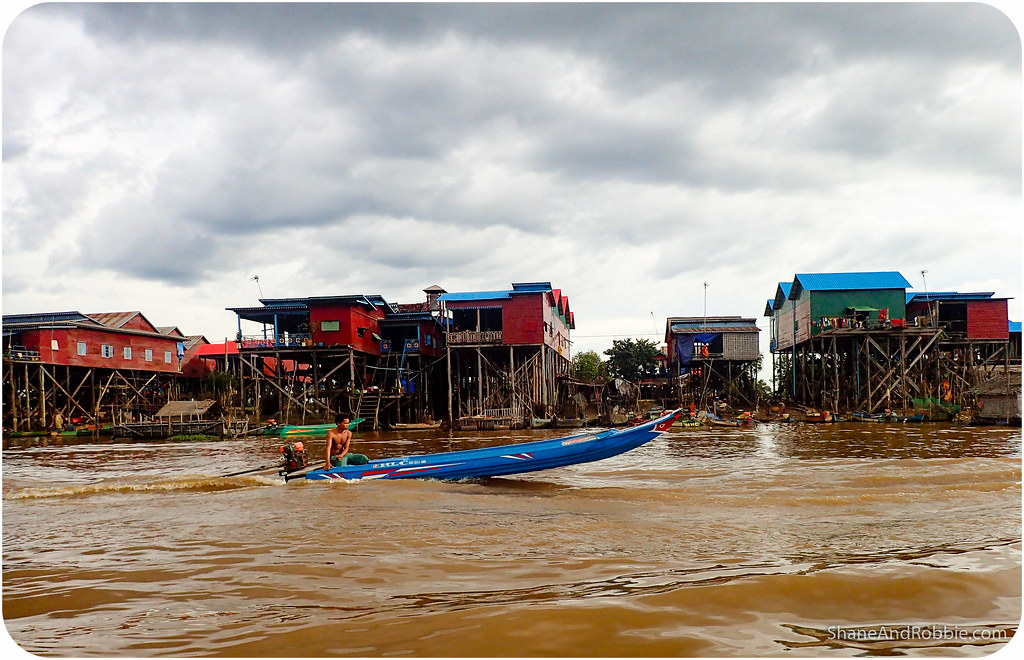 Once our boat navigated its way through the forest of stilt houses, we entered the flood zone, which just a few months ago was under metres of water. At the moment the freshly exposed islets are just being tilled and prepared for planting.

Further out we cruised through a floating village where several dozens of wooden houses floated on the water’s surface. 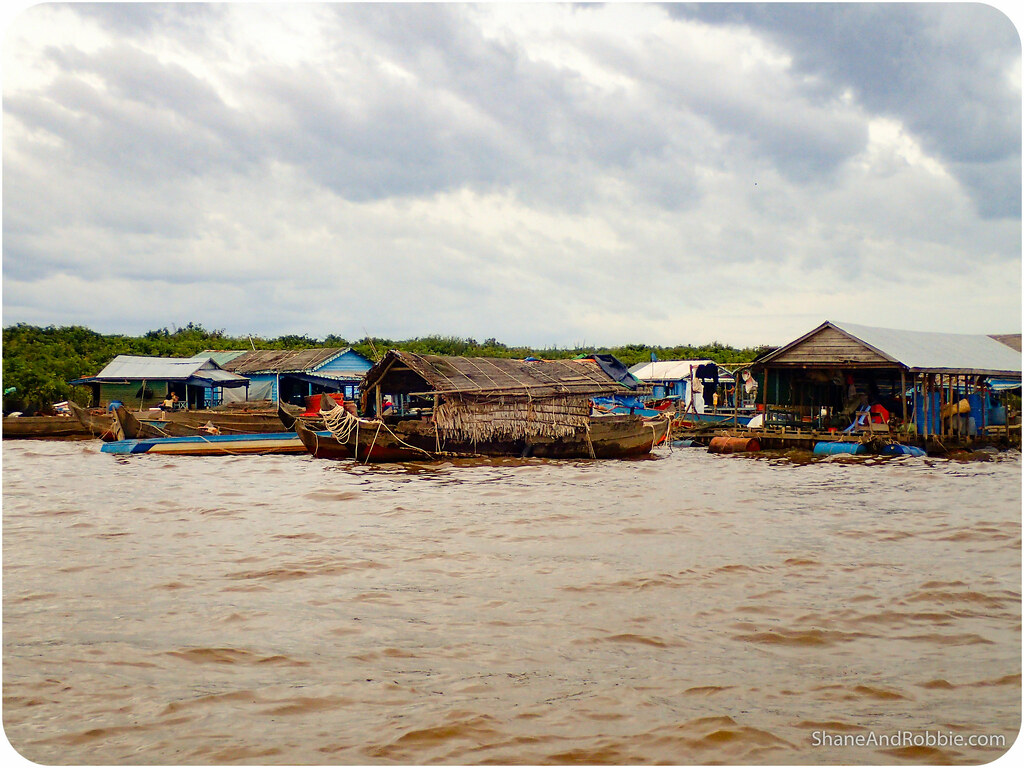 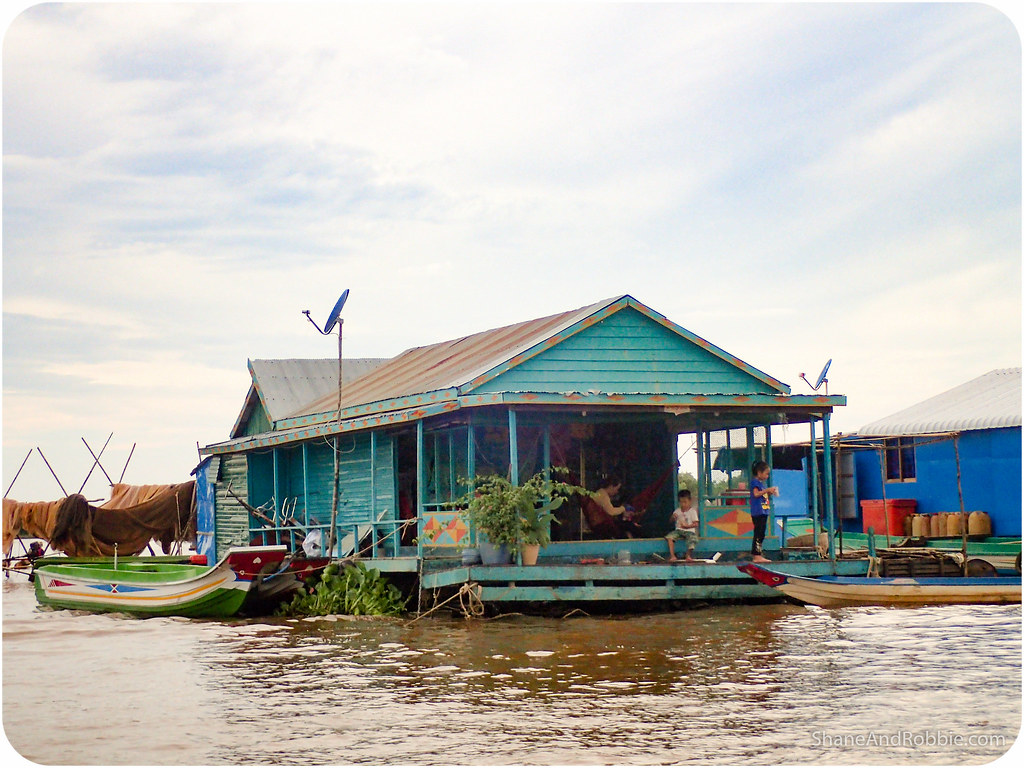 Out on the water boats serve as more than just homes, however, with all sorts of floating conveniences in amongst the house boats. We saw a floating school, a boat health clinic, and even a floating shop, making its way door-to-door selling essentials like soap. 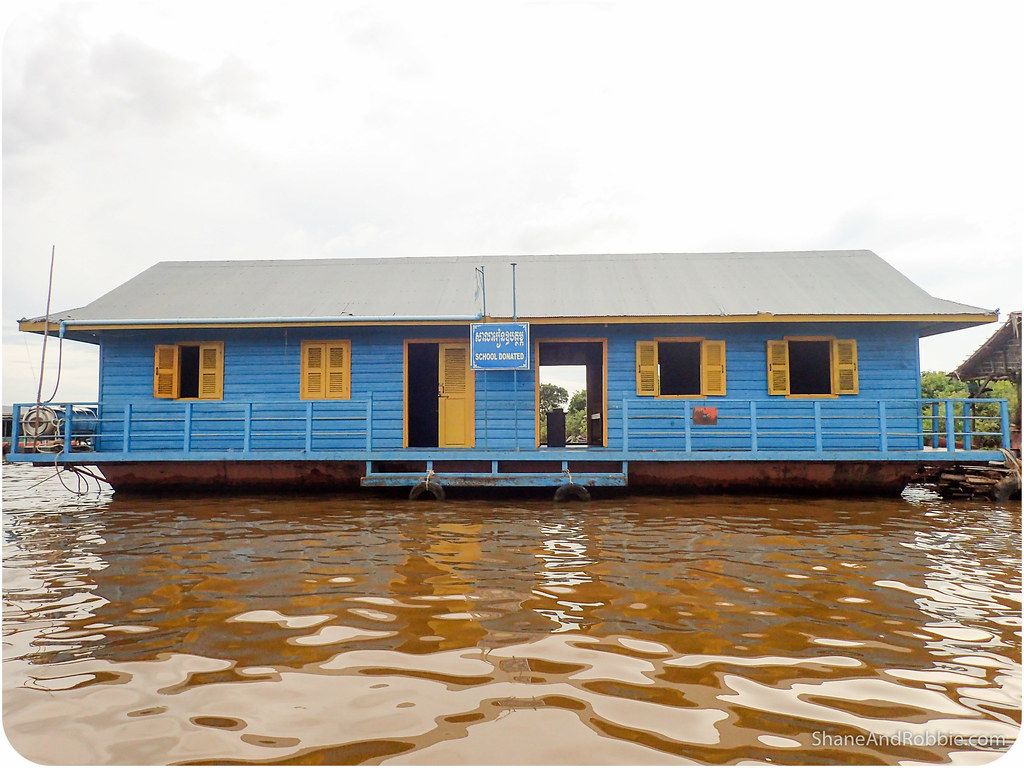 We were told that amongst lake dwellers, these floating homes are less desirable, with wealthier families building stilted homes as soon as they can afford to. The juxtaposition seems to be that in times of severe flood (which happens somewhat regularly), those with stilted homes have to abandon their houses and run the risk of losing everything, whilst those with floating houses remain comfortably afloat. 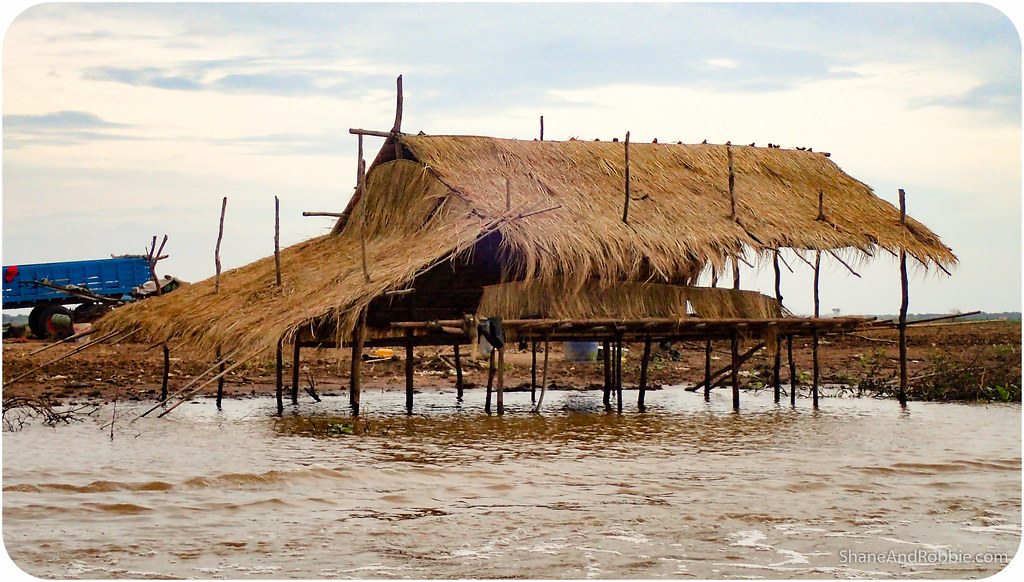 Regardless of their style of housing, everyone on the lake uses boats for transport and there were heaps of vessels travelling along the waterways when we were there. Some of the boats were being captained by some very young children who no doubt learnt to paddle before they could walk!

Even our boat crew was seriously young – they were all brothers from the same family and were helping with the day’s tourist trade as Dad was out collecting snails to sell at the market. Seems freshwater snails from Tonle Sap are in great demand throughout Asia, and with water levels dropping, now is the time to go gathering arthropods! We saw a few boats ladened with giant white sacks full of snails making their way back to shore as we were cruising around the lake.

We spent about 90 minutes cruising around the waterways in all, which was more than enough time to see the various facets of life on the lake. It seems like a tough life, but a good one in that food is never scarce. 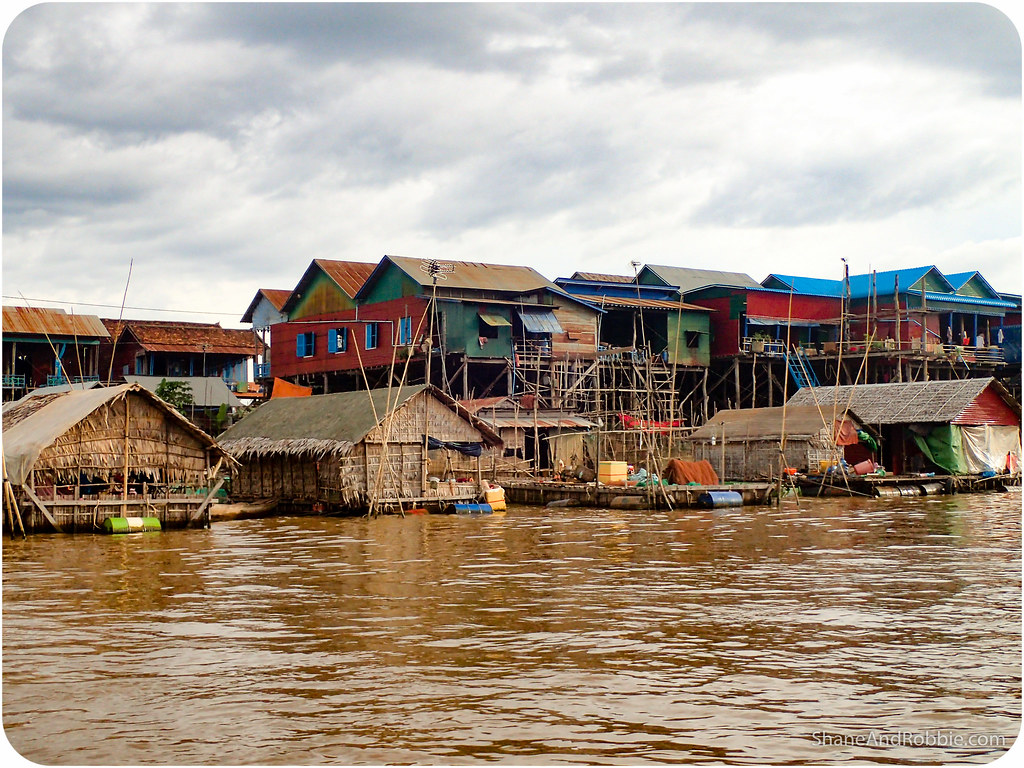 After our boat ride around the stilted and floating villages of Tonle Sap we headed back into Siem Reap for lunch and an afternoon of soaring through the skies over the ancient city of Angkor. We had originally planned to go hot air ballooning over Angkor while we were here, but upon discovering that the balloon here is tethered*, lost interest. The thought of seeing the ruins of Angkor form the air by helicopter soon surfaced as an alternative, and boy what a visual feast it was!

*That is, it just goes up, stays in one spot for a few minutes so people can get their photos, then comes back down again. Hardly the air-borne adventure we were hoping for! 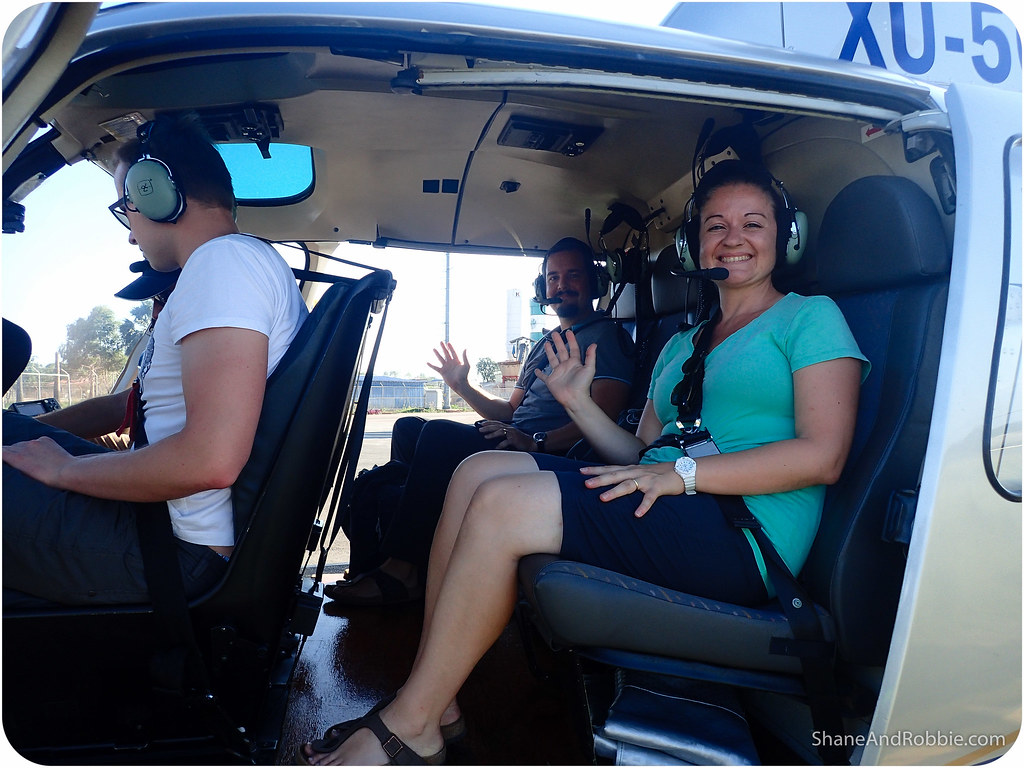 Hovering in the sky above Angkor Wat and over the surrounding ancient temples gave us a very different perspective on the size, scale, and beauty of the ancient Khmer Empire and their incredible creations. Seeing it from the ground the last couple of days was stunning, but the aerial view was truly spectacular. 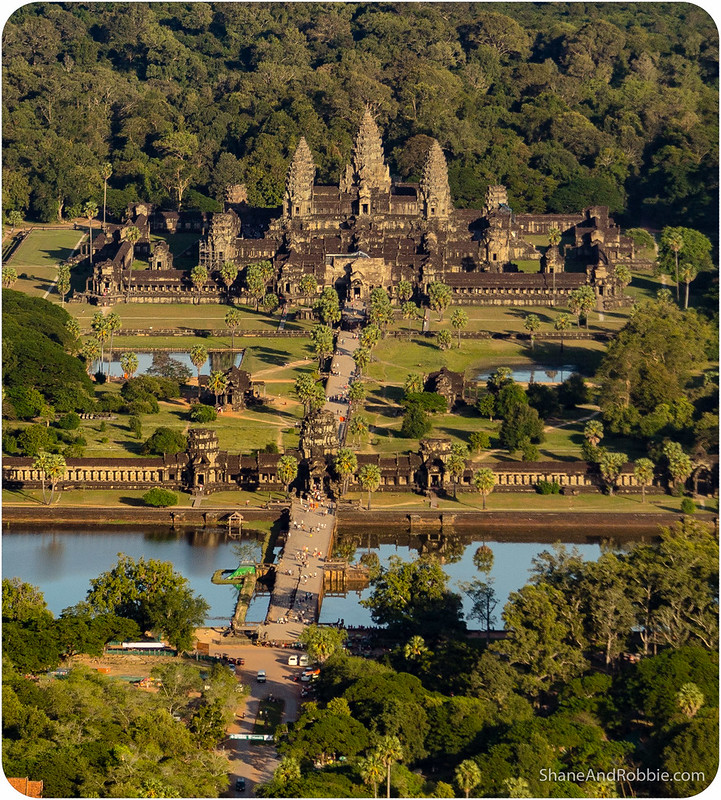 Seeing Angkor Wat from the air really put into perspective for us the genius of the Khmers. The perfect symmetry of the moats and the scale of the structure was impressive. 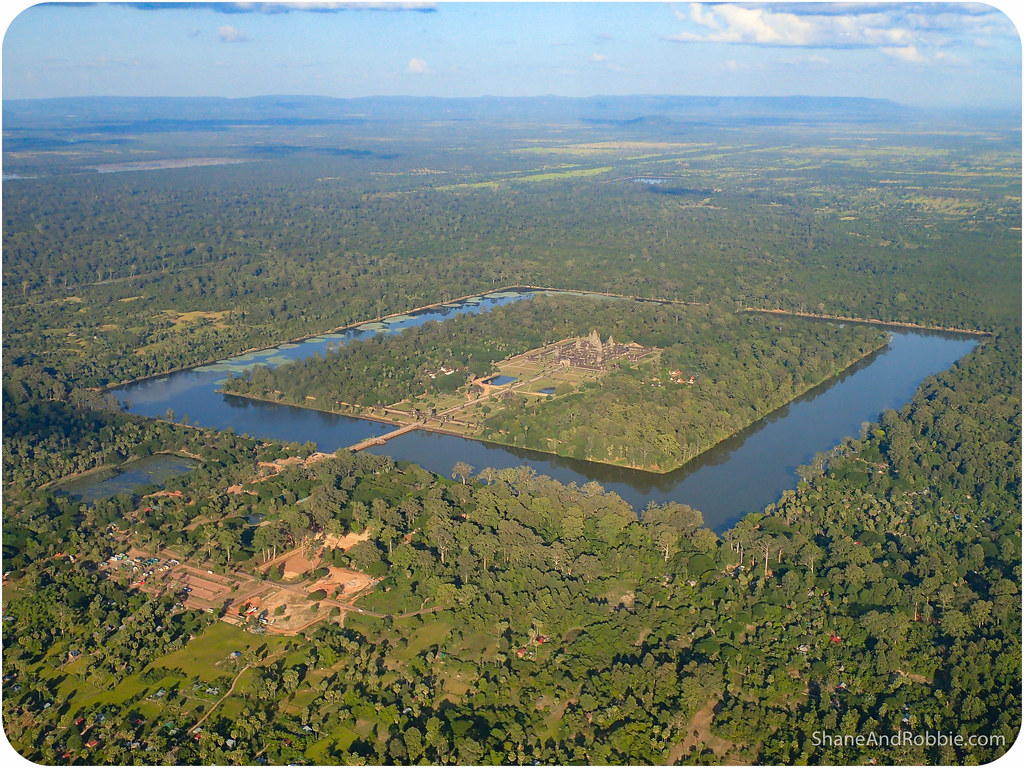 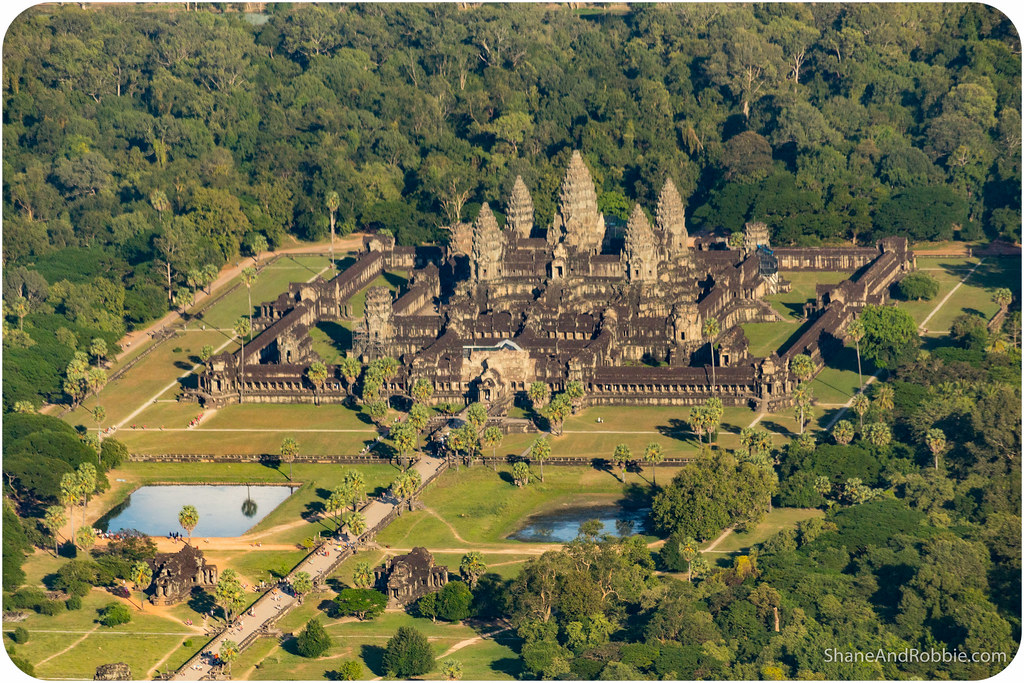 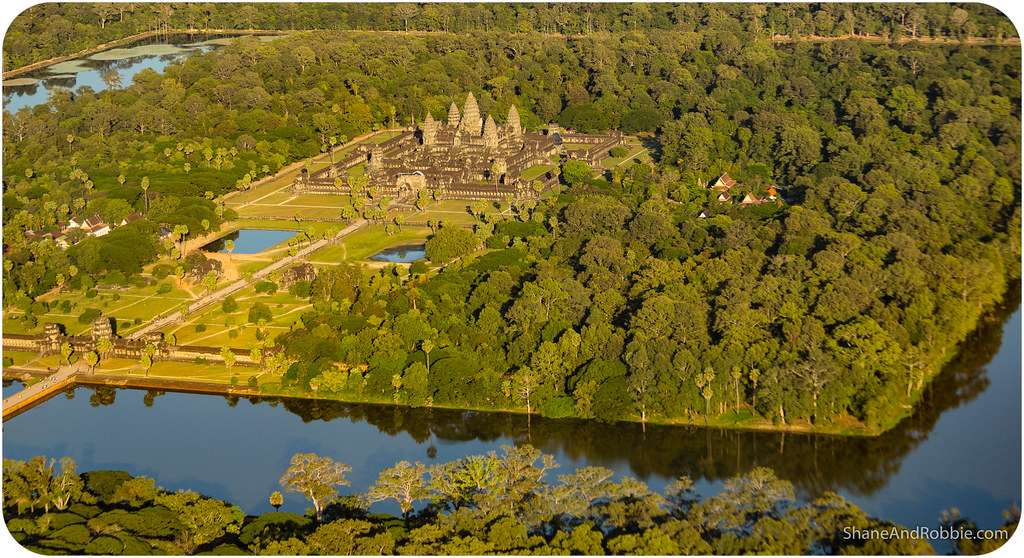 Our flight glided over many temples that we didn’t get to see in our ground-based tour. Of these Prasat Pre Roup, built in the 10th century as King Rajendravarman’s state temple/mausoleum, was particularly stunning from the air. 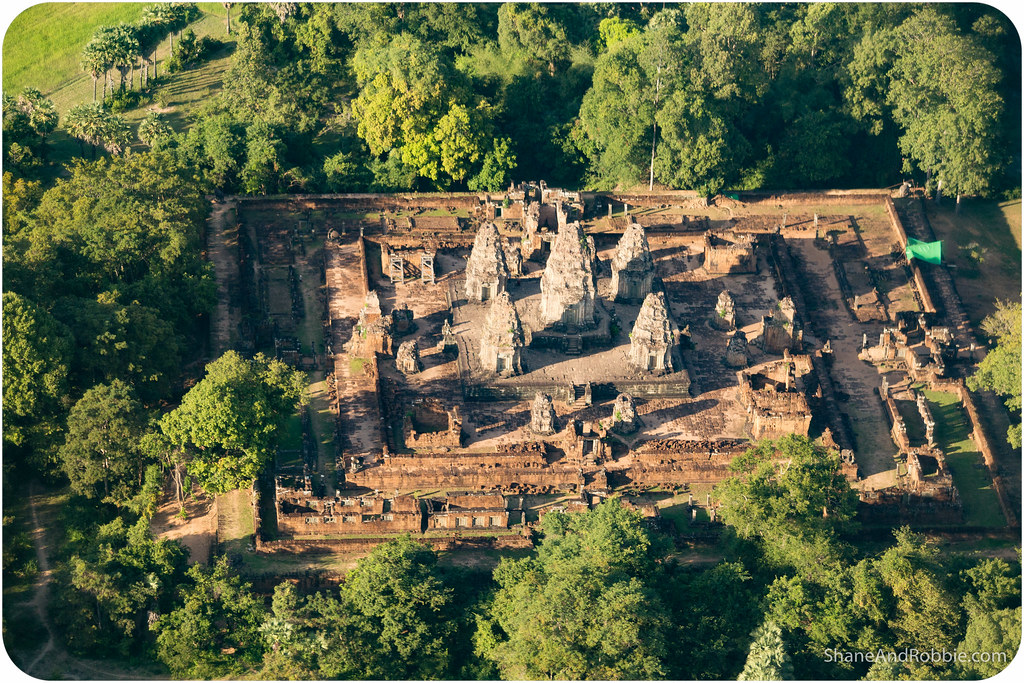 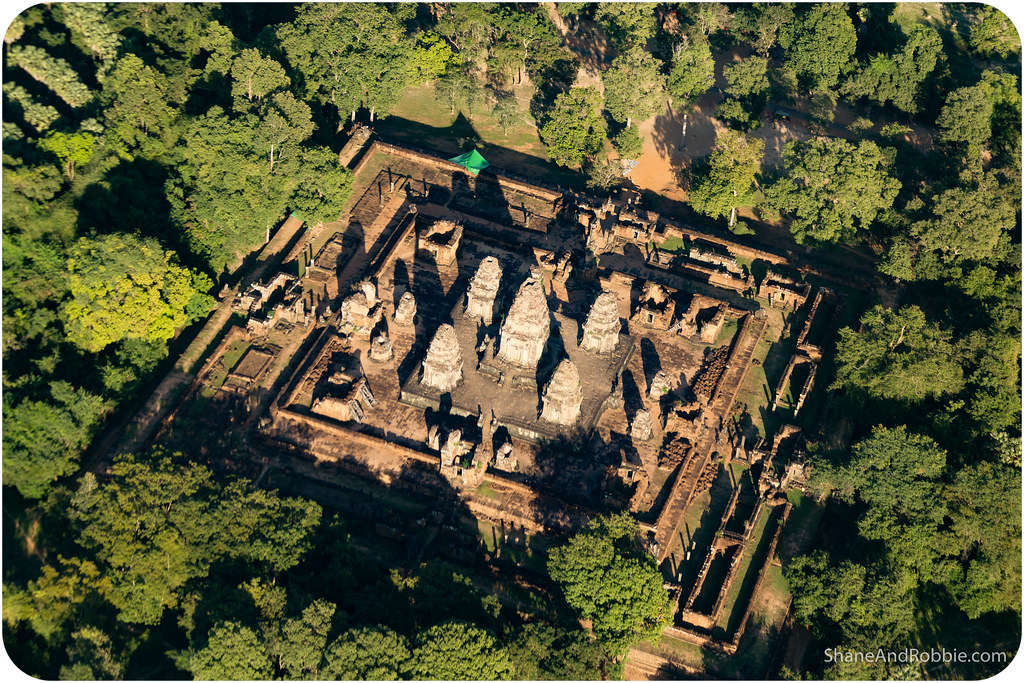 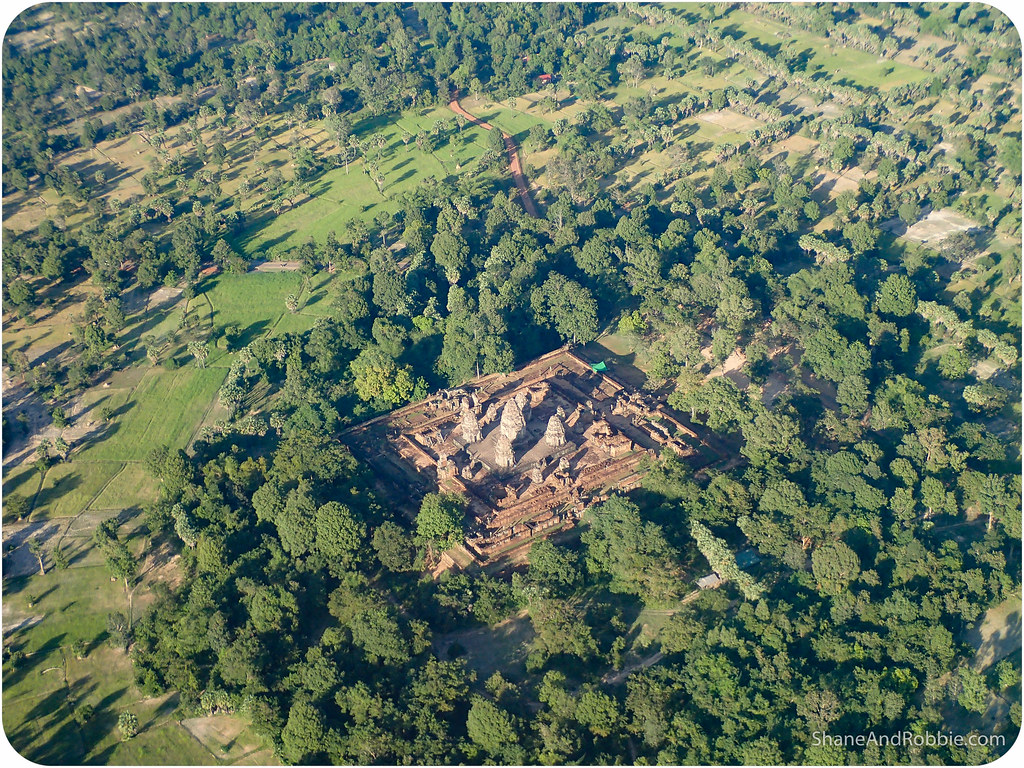 Our flight took us as far as Tonle Sap Lake and over a floating village, which looked minuscule far below us. The lake however was huge – it’s blue waters extending for miles. 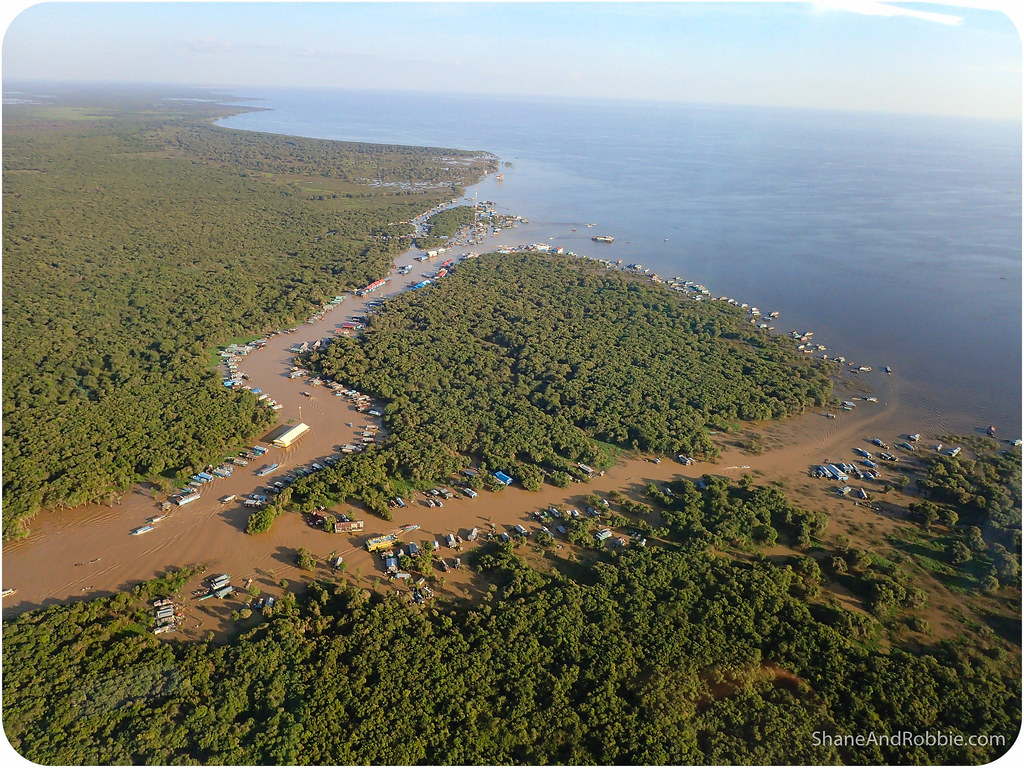 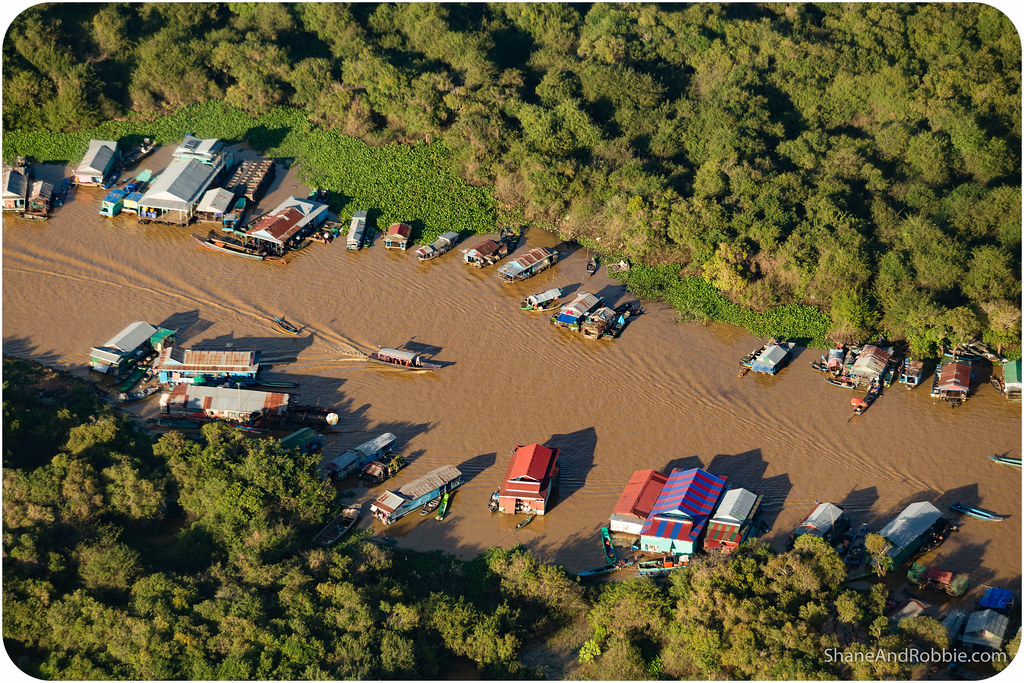 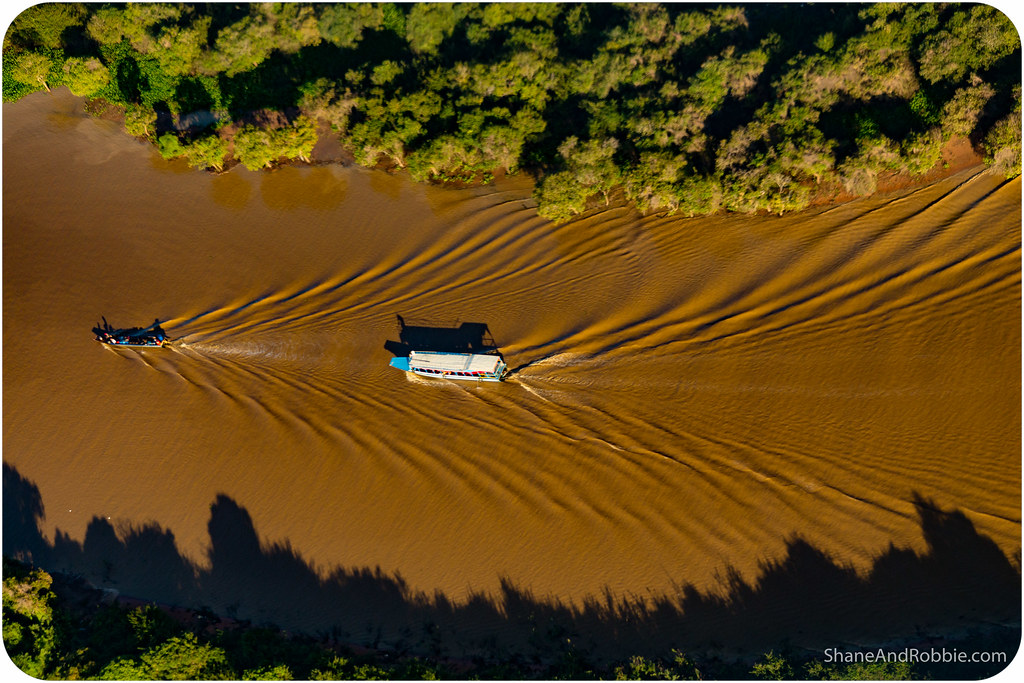 On the way back we swooped over the ruins on the hill-top temple of Phnom Krom which is today an active Buddhist monastery. Built during the 9th century the temple was originally designed as a Hindu shrine dedicated to Shiva, Vishnu, and Brahma – each of the 3 towers was dedicated to one of the Gods. 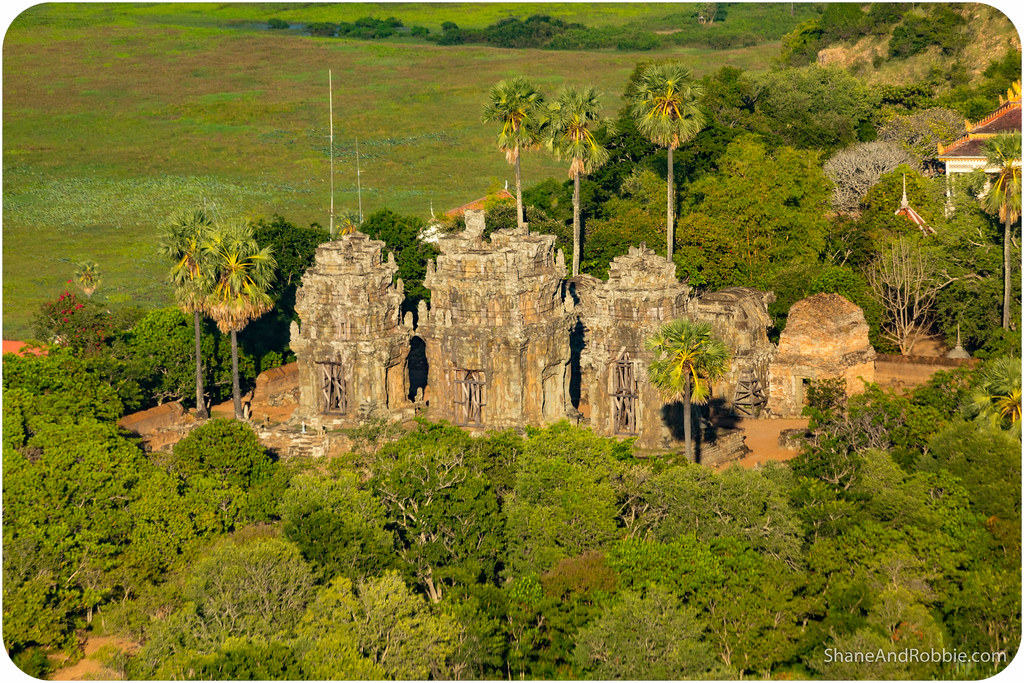 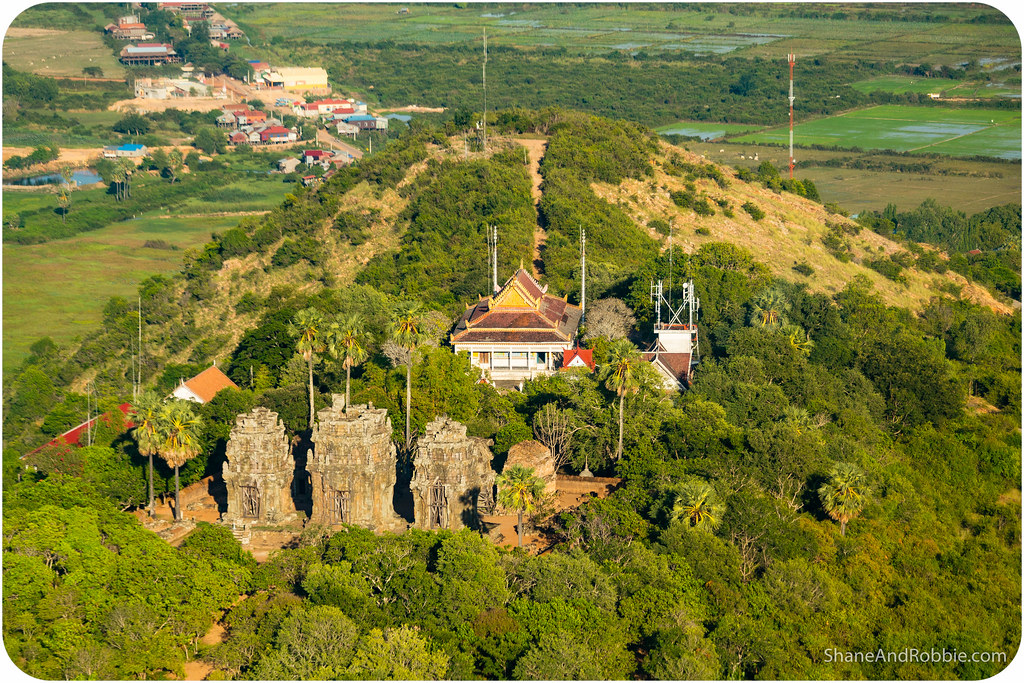 We even got to fly over Siem Reap township, which was also cool. Siem Reap is a much bigger town than we had realised, and some of those fancy 5 star hotels sure do have some nice swimming pools! 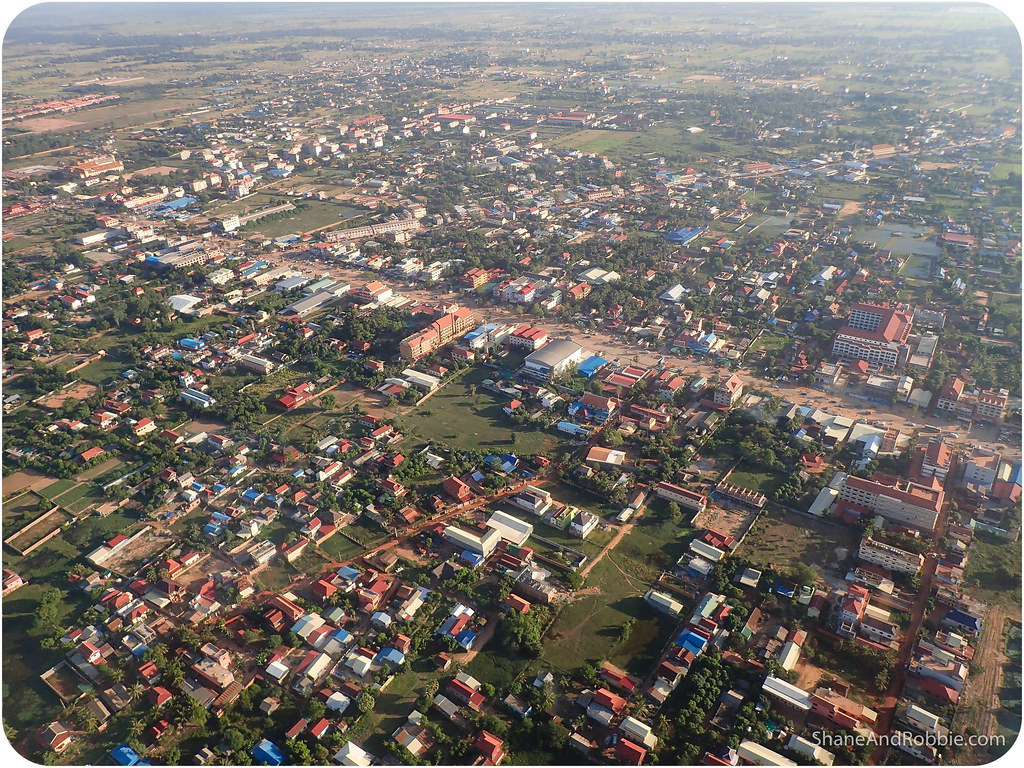 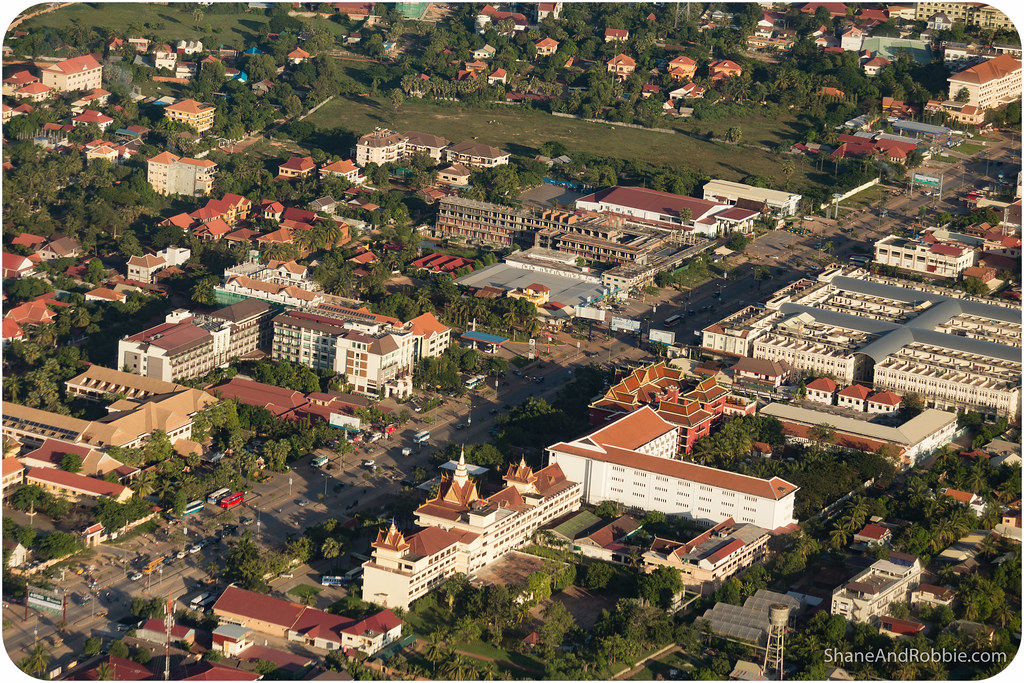 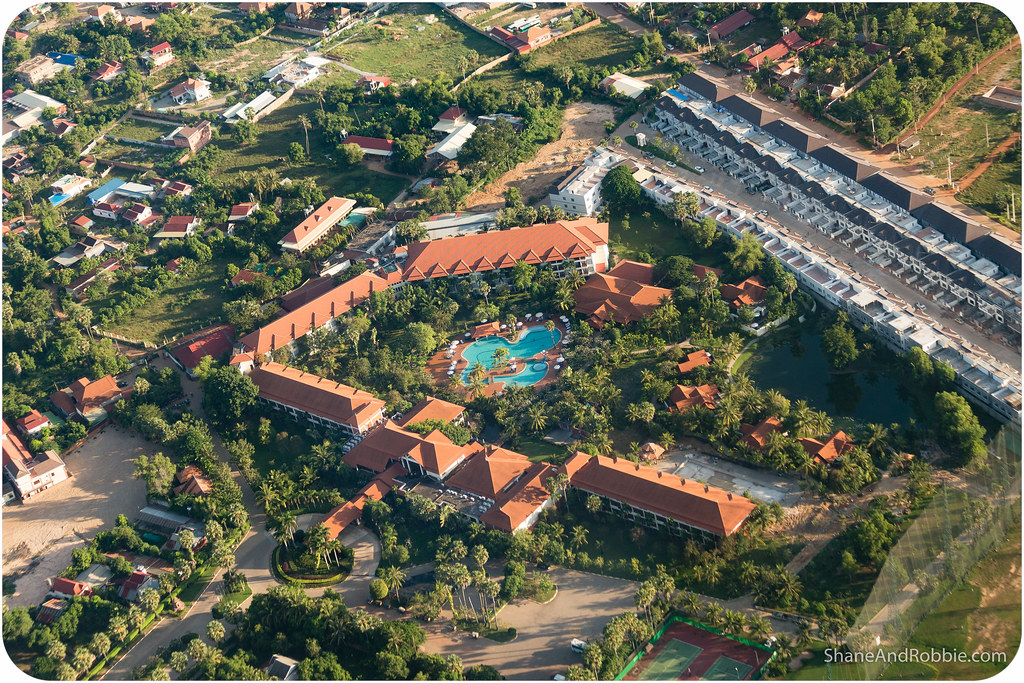 And so ends our final day in Siem Reap. What a way to finish too! This place is spectacular and stands as an awe-inspiring testament to the great Khmer Empire. We can only hope that as visitor numbers grow (which they will inevitably), the site is protected and managed in such a way that its beauty and splendour are protected. Angkor really is one of the most wondrous places of Earth! 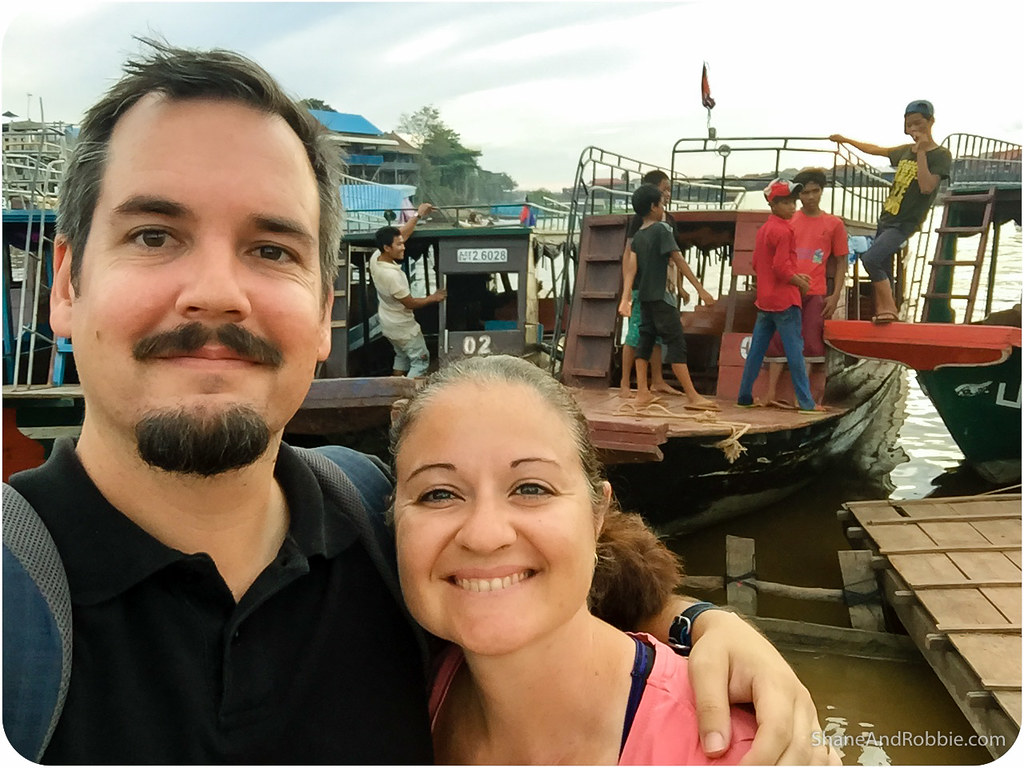