THE SIAMESE CAPITAL OF AYUTTHAYA

Leaving Kanchanaburi today we made our way eastwards to Ayutthaya, the former capital of the Siamese kingdom. Once the diplomatic, economic, and spiritual heart of Siam, Ayutthaya is now an archaeological ruin and a UNESCO World Heritage Site. As in Angkor, Cambodia, most of the common buildings in Ayutthaya were built of wood, so there is nothing left of them. Temples, however, were built of stone and so today millions flock to Ayutthaya every year to see the remains of once great temples like Wat Yai Chaimongkol and Wat Mahathat. The size and grandeur of these temple ruins gave us a great impression of how impressive Ayutthaya must have once been, during the golden years of the Siamese empire. 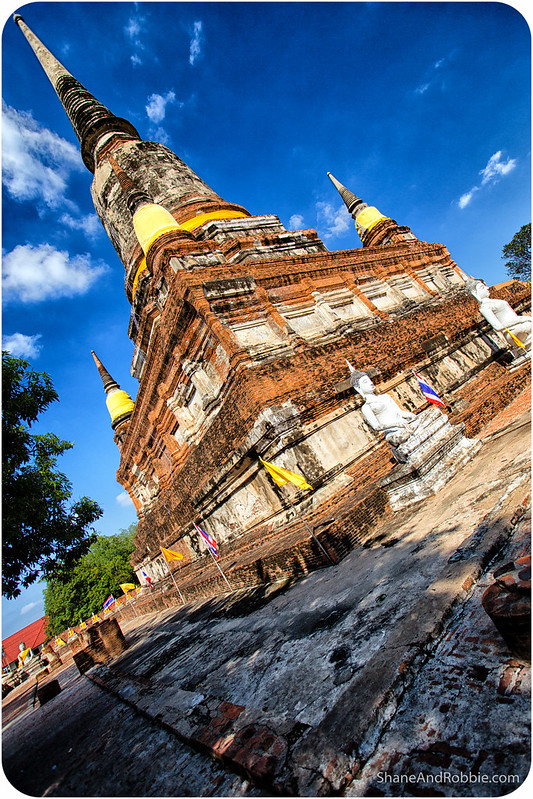 Ayutthaya was founded in 1350 by King U Thong, who moved his court there after a small pox outbreak decimated the former Siamese capital of Sukhothai. With the decline of The Khmer Empire and the fall of Angkor to the Siamese, Ayutthaya soon became the most important city is South East Asia. Strategically positioned on an island, surrounded by 3 major rivers that connected to the sea, and equidistant from both India and China, the city was ideally located. Its position allowed Ayutthaya to flourish and the city had a population of almost a million people in the 18th century. The royal court in Ayutthaya hosted ambassadors from far and wide, including the French court at Versailles, the Mughal Court of India, the imperial court of Japan, and the imperial court of China. 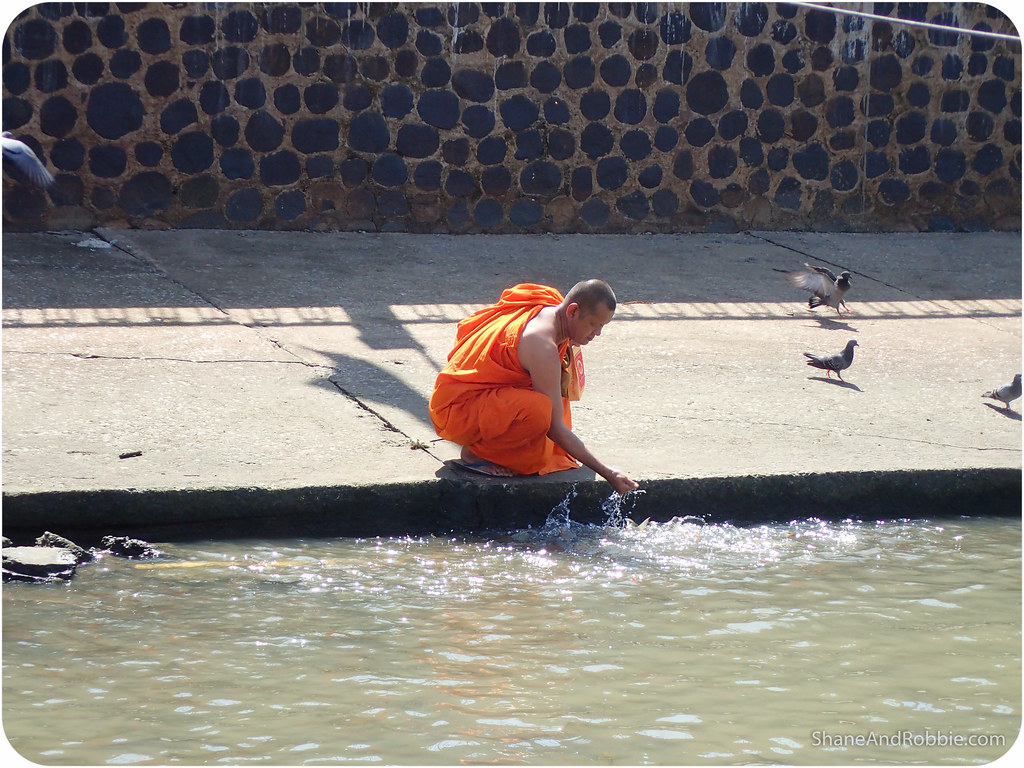 After more than 4 centuries of ascendency, however, the city was attacked and razed by the Burmese army in 1767. The Burmese burned the city to the ground and forced the inhabitants to abandon the city. The capital was then moved to Bangkok, and Ayutthaya never regained its former glory. Today it’s a small town built around an extensive archaeological site characterised by large stupas (i.e. Buddhist reliquaries) and ruined temples. The most famous of these is Wat Mahathat, with its much-photographed detached Buddha head embedded in the roots of an ancient banyan tree. 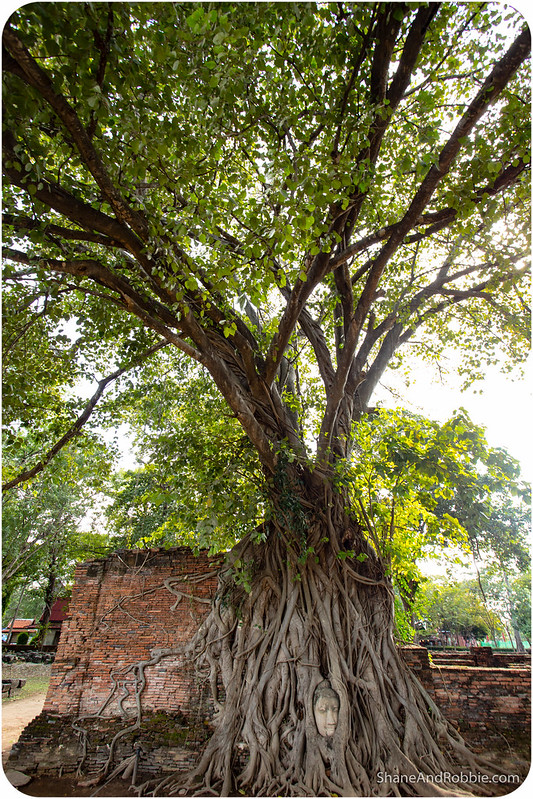 Wat Mahathat was built in 1367, at the heart of Ayutthaya, and was known as the Temple of the Great Relics. As the most important temple in the whole of Siam, Wat Mahathat was symbolic centre of Buddhism in Thailand and the residence of the leader of the Thai Buddhist monks. 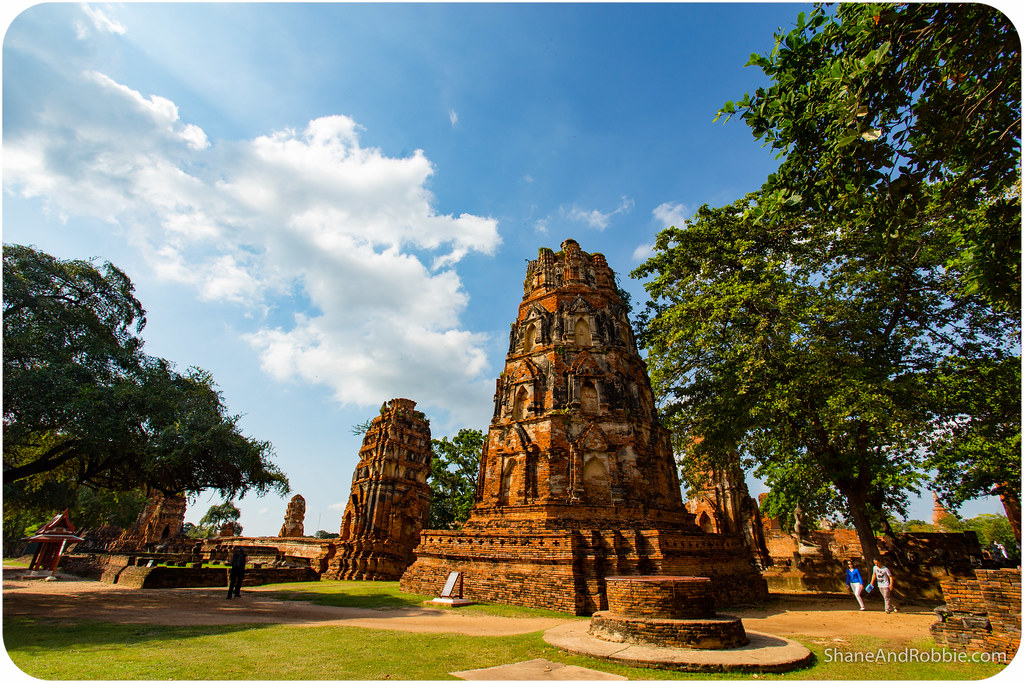 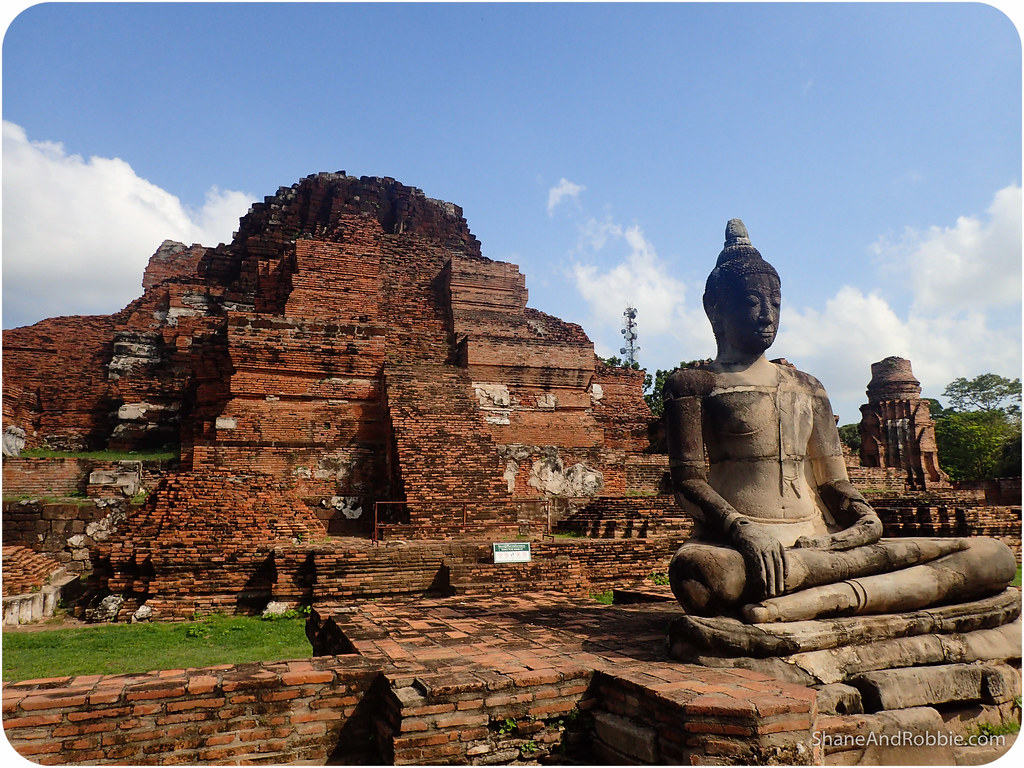 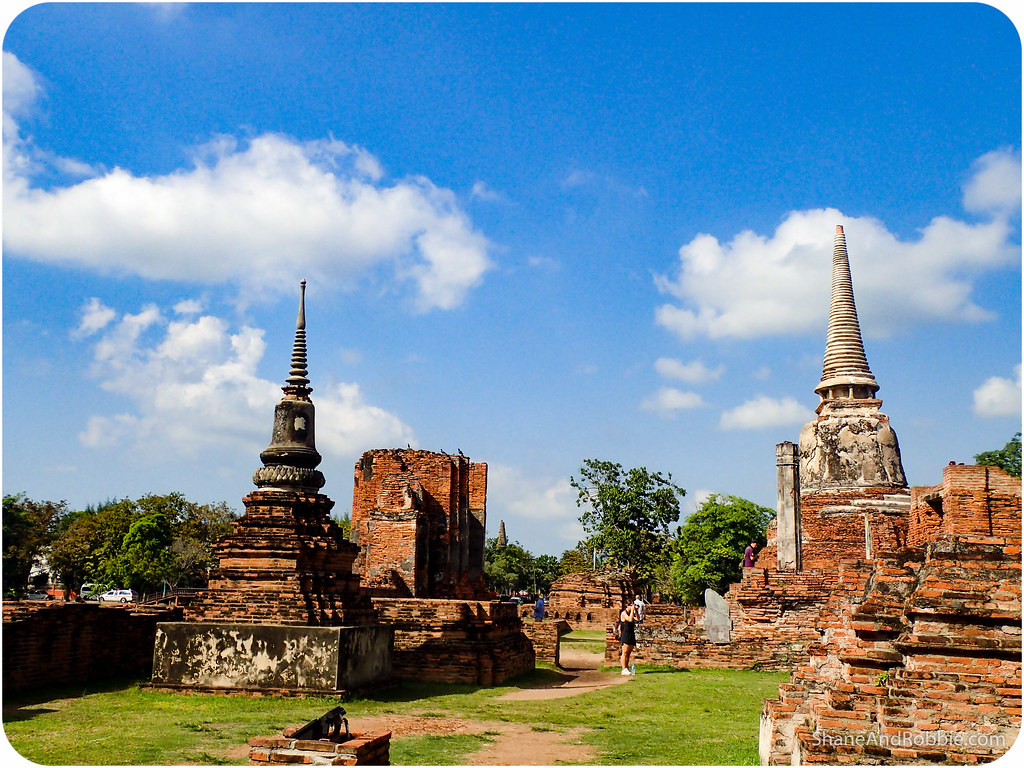 Many of the large stupas have collapsed over the centuries, but what remains is still impressive and fascinating. Architecturally there are a lot of similarities between early Siamese temples like Wat Mahathat and the temples of Angkor in Cambodia, which is hardly surprising given that the Siamese kidnapped most of the artists, monks, and intellectual elite of Angkor when they sacked the city in 1352. 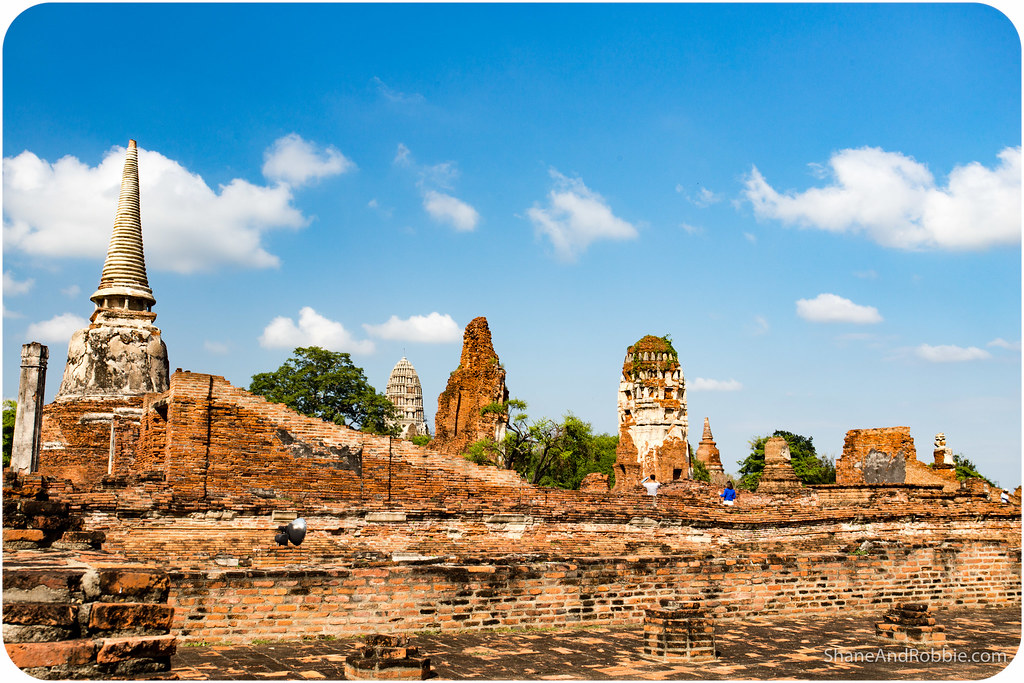 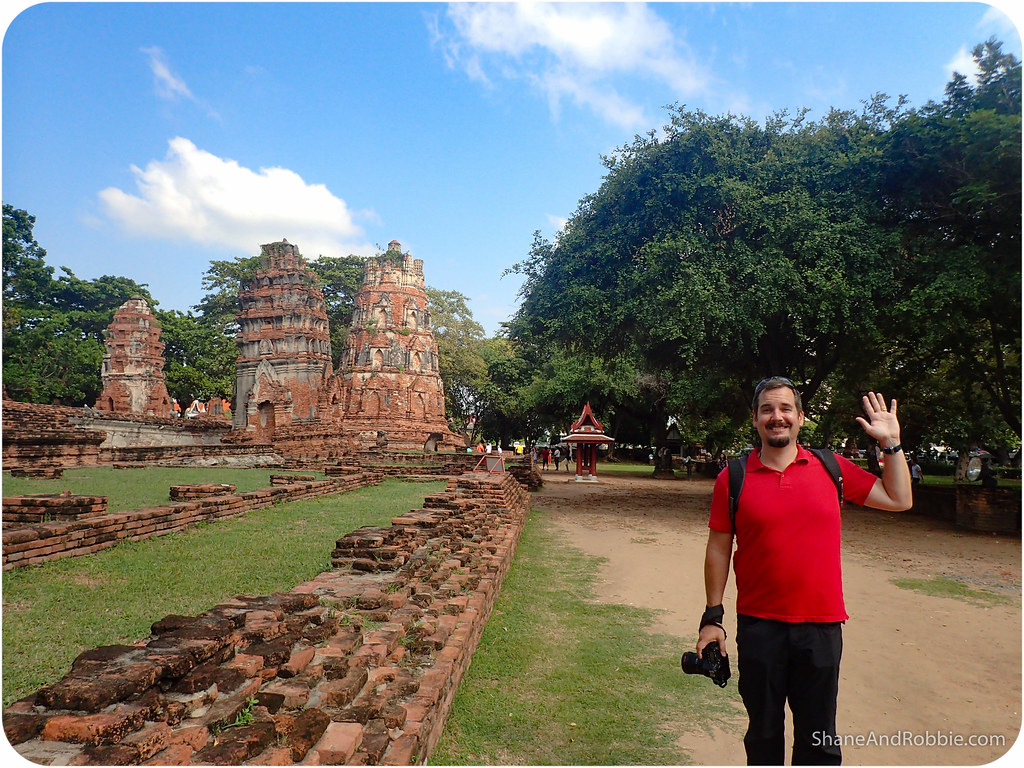 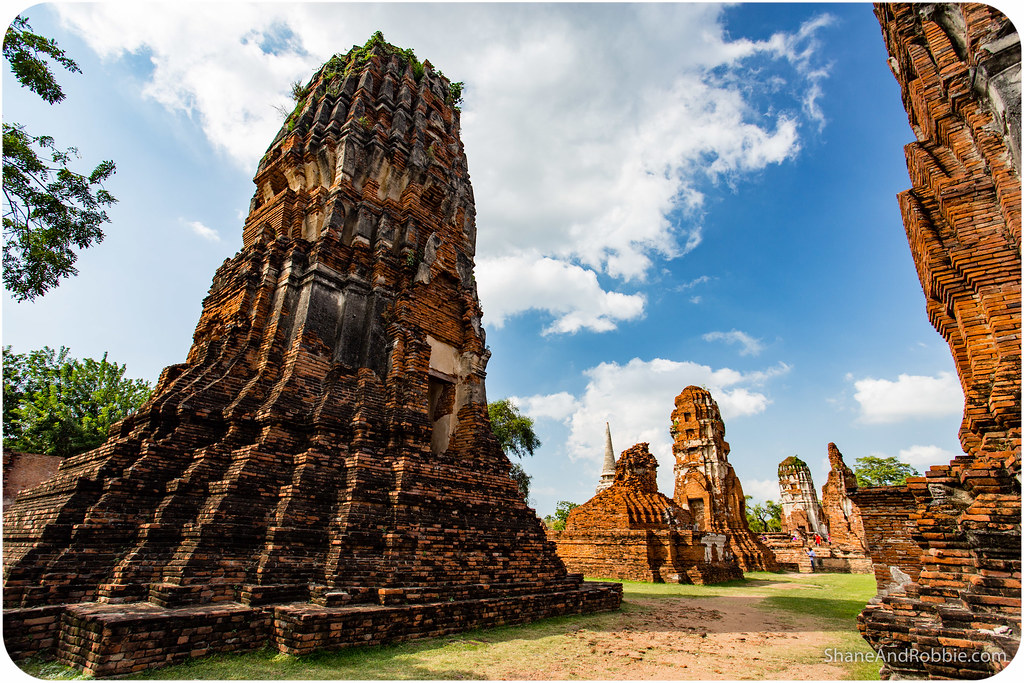 The temple was destroyed by the Burmese who also vandalised many of the Buddha images in Ayutthaya by lopping off the heads. The area remained abandoned and overgrown until the 1950s when the restoration work revealed just how large Wat Mahathat was and uncovered the now famous Buddha head in a tree. Nobody knows for certain how the Buddha head became entwined in the roots of the banyan tree, though the most likely theory is that the head had been removed from its accompanying body by a thief seeking to sell it abroad*. Burying the head for later retrieval the thief never returned and nature took care of the rest, trapping the artefact forever more in the sinewy embrace of a banyan tree.

*Buddha heads and statues from South East Asian temples were worth a fair price during the 18th and 19th centuries and many can still be seen today in museums around Europe. 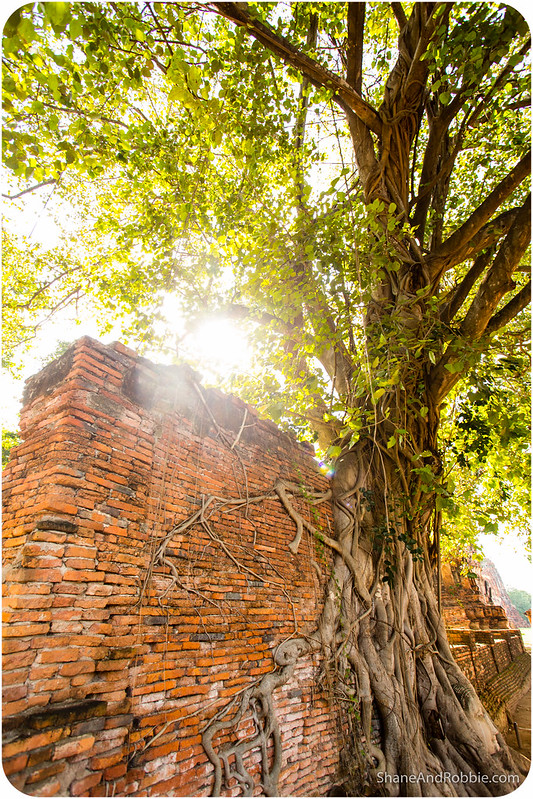 After Wat Mahathat we made our way to Wat Yai Chaimongkol, famed for its enormous reclining Buddha, hundreds of seated Buddhas, and large hollow stupa. 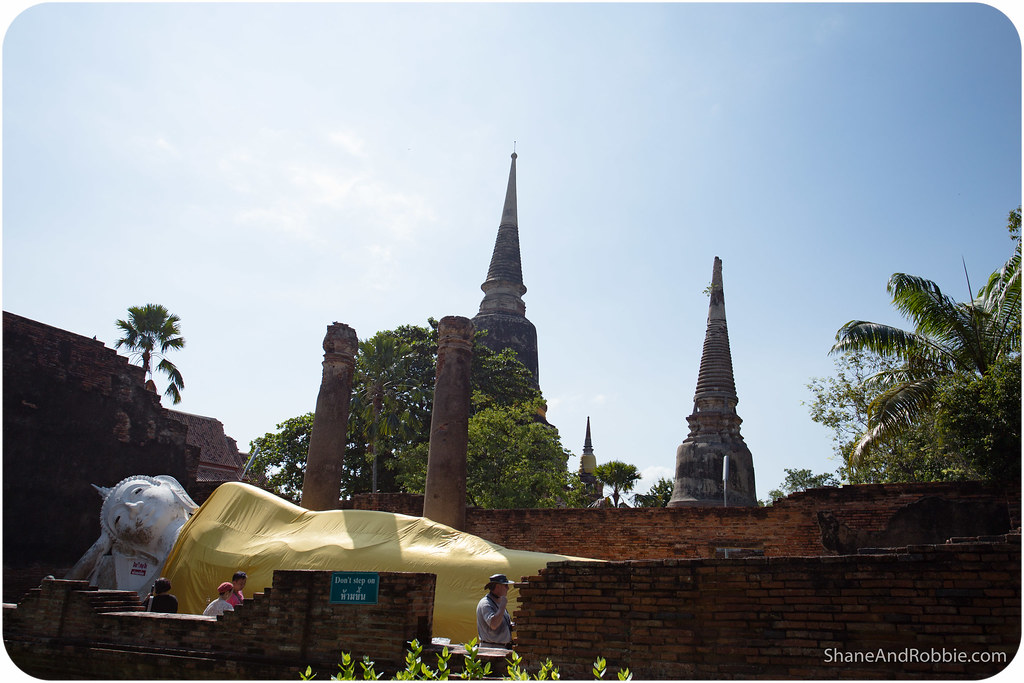 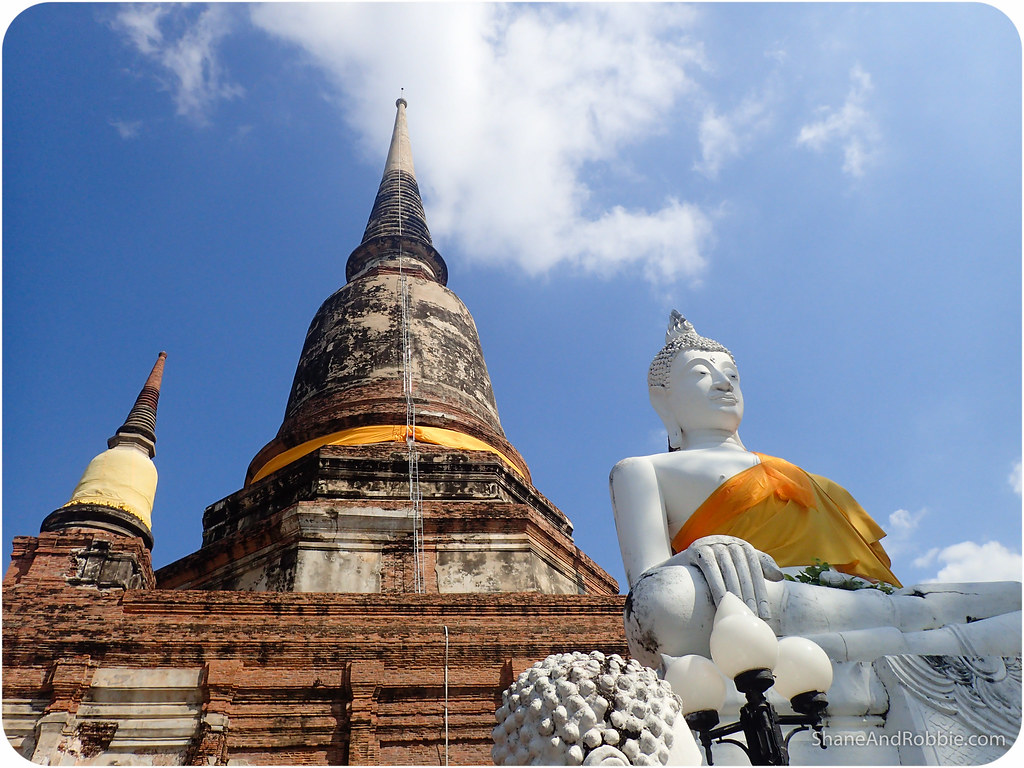 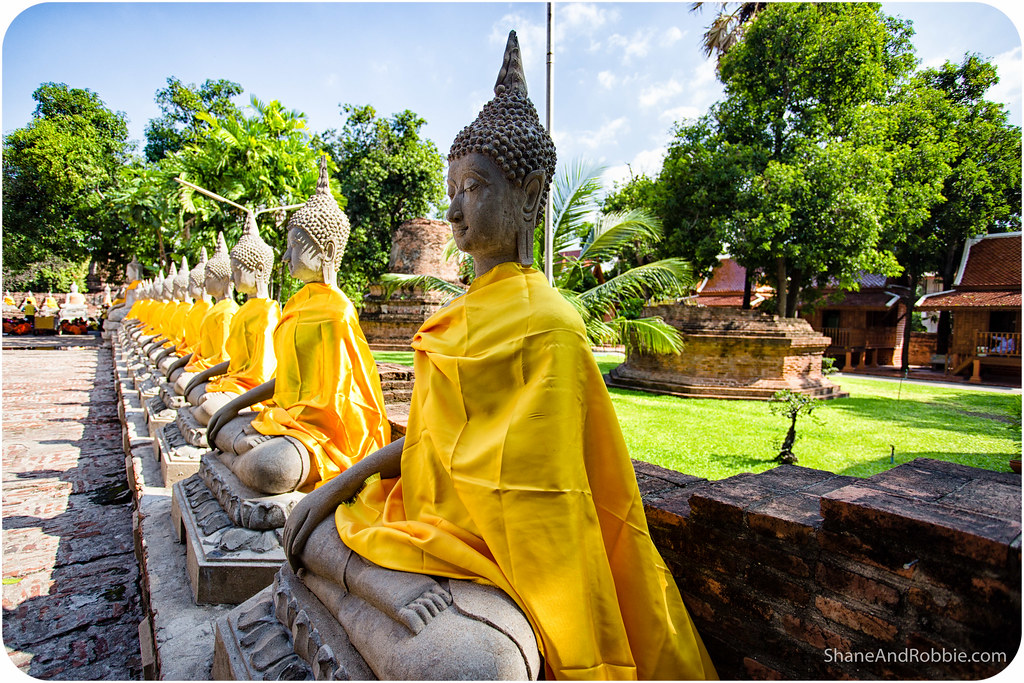 Wat Yai Chaimongkol was built by King U Thong in 1357 as a religious school for monks who had returned from India and Ceylon (i.e. Sri Lanka). 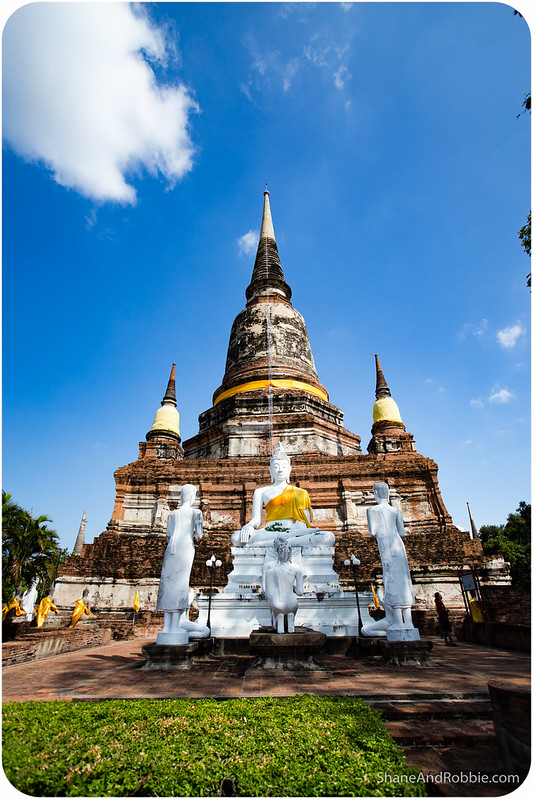 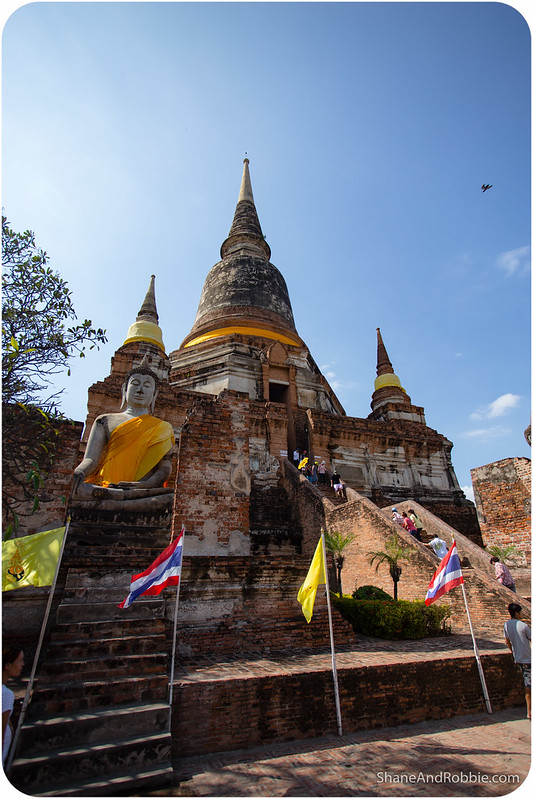 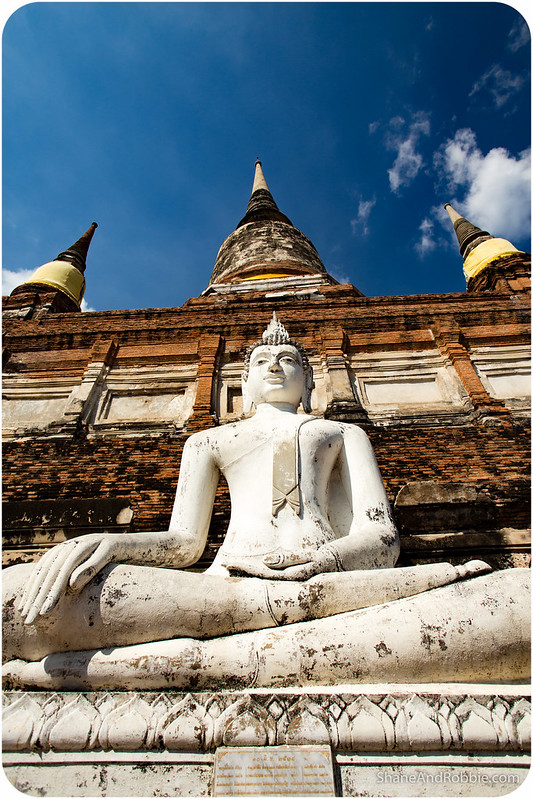 In 1592, during the reign of King Naresuan, the Burmese attacked Ayutthaya. That time they were unsuccessful in their bid to subjugate the Siamese empire and, in memory of the Siamese victory against the Burmese, King Naresuan ordered a giant stupa built on the grounds of Wat Yai Chaimongkol. The giant stupa of Wat Yai Chaimongkol and its surrounding army of Buddhist statues, all shrouded in gold, is iconic of Ayutthaya and makes for some great photos. 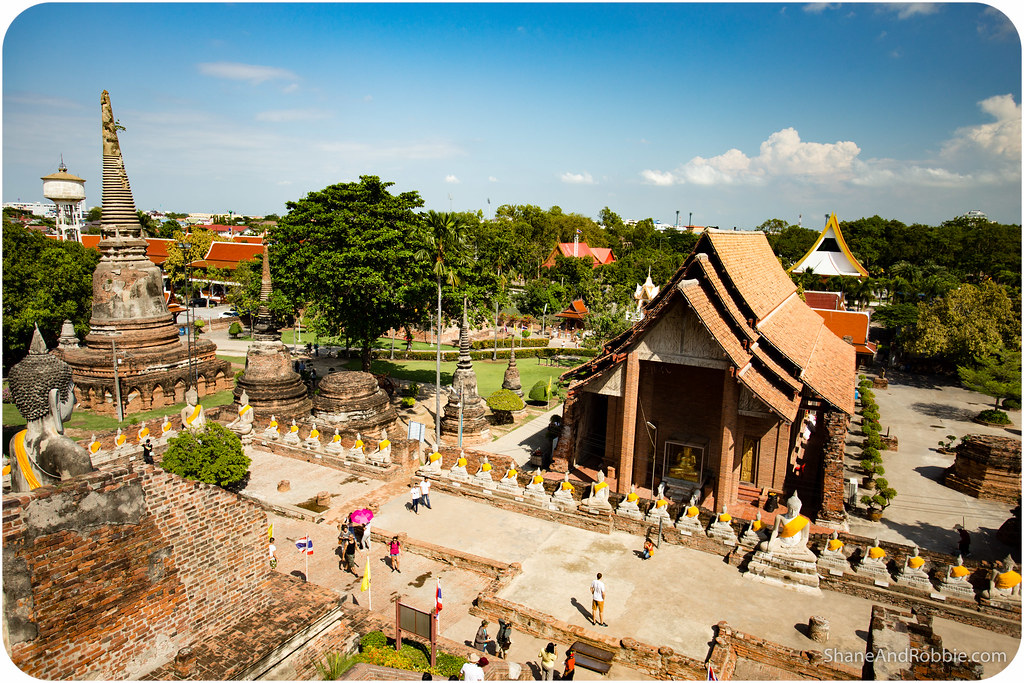 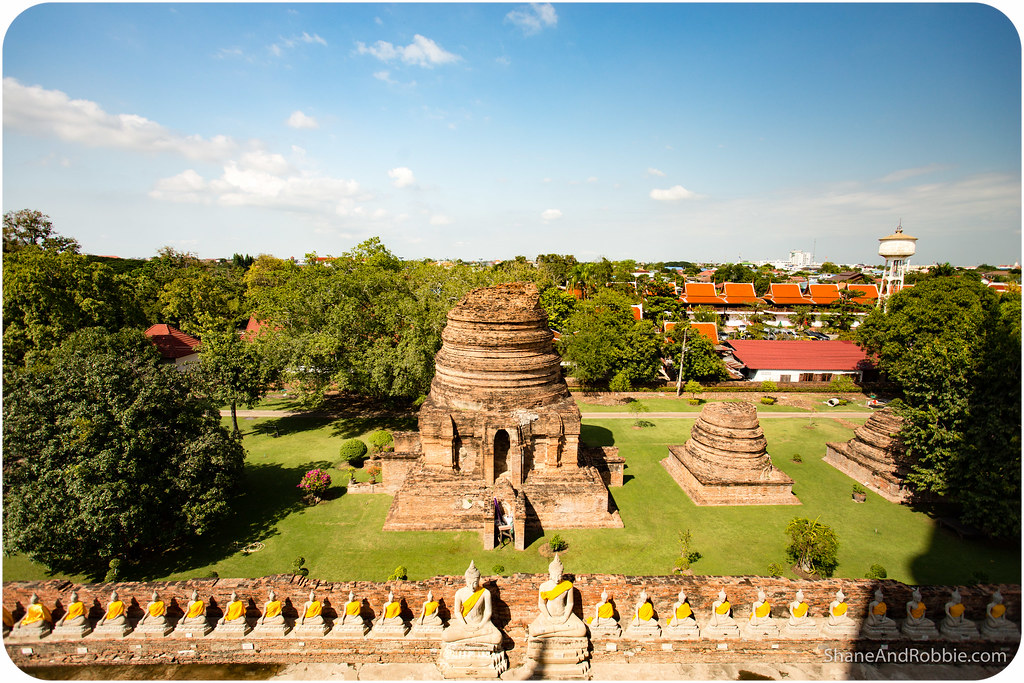 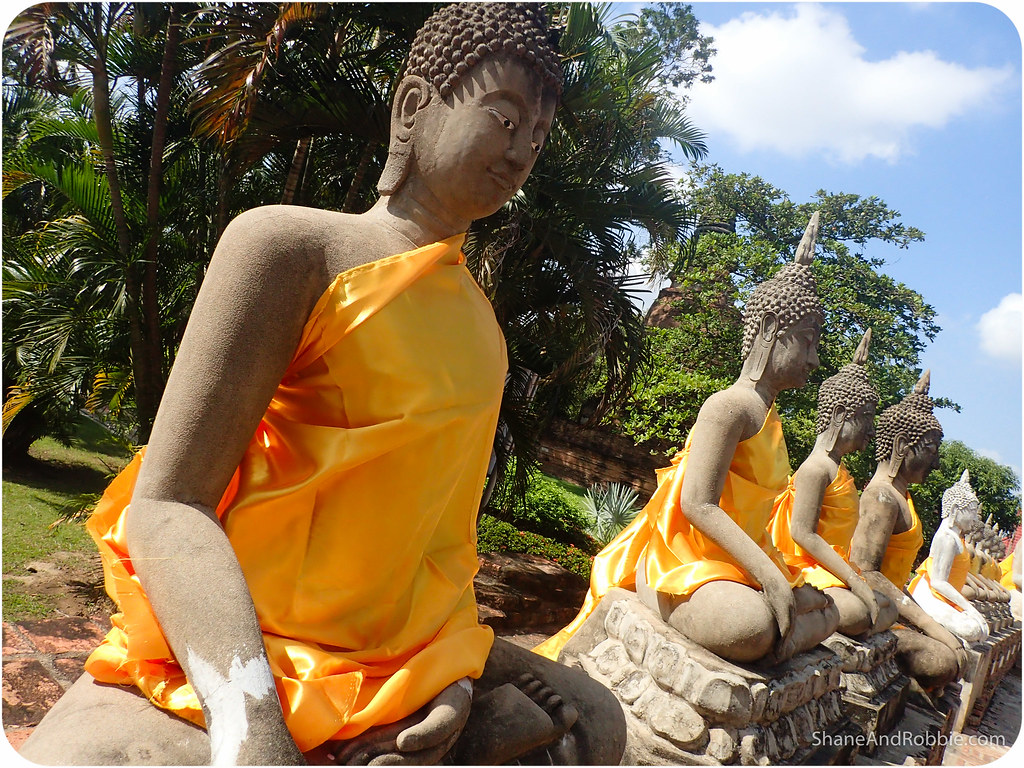 We then set off for our final bit of temple-viewing, this time going across the river to visit Wat Phananchoeng. Built in 1324, some 26 years before the city of Ayutthaya was officially founded, the temple houses an immense gilded 19m high seated Buddha. This highly revered Buddha statue is regarded as a guardian for business-men and attracts thousands of worshippers every year seeking good fortune in commerce and trade. At the time we visited the temple was full of devotees and a ceremony was taking place, where the robes of the Buddha were being changed. 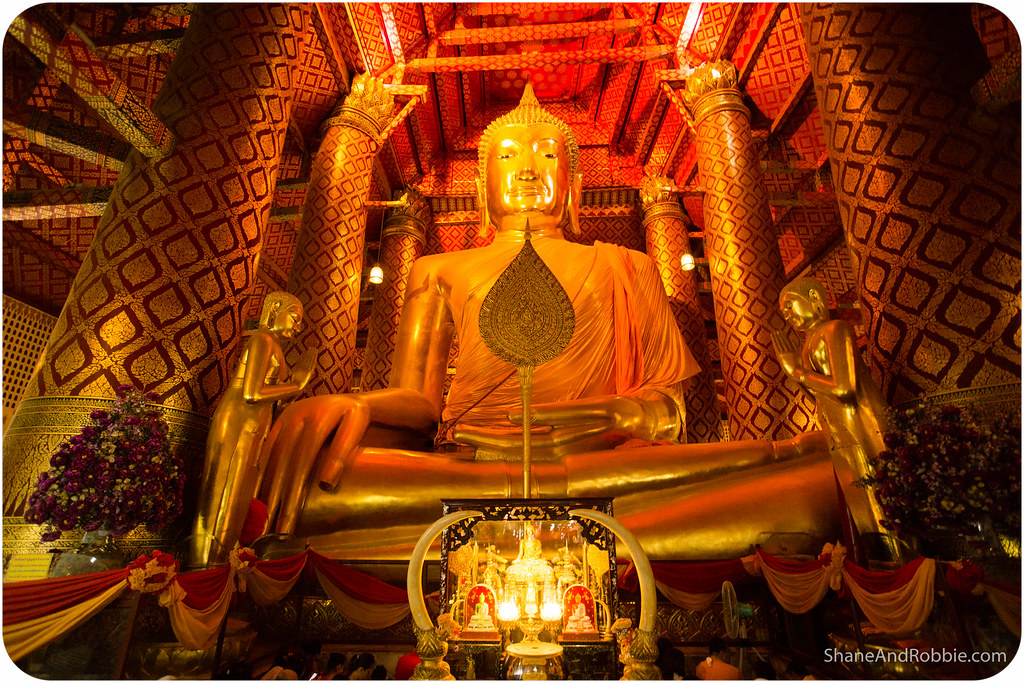 By this stage the heat of the day had reached its peak and we were well and truly baked, so we retreated to the cool of our air conditioned room and have been relaxing here ever since. It was interesting seeing some of the highlights of Ayutthaya today, though all the tourist infrastructure that has built up around the sites detracts somewhat from their allure. Still, we’re finding it fascinating learning about the great empires of South East Asia and seeing how modern Thailand came to be, evolving from the kingdom of Siam to become the nation it is today. 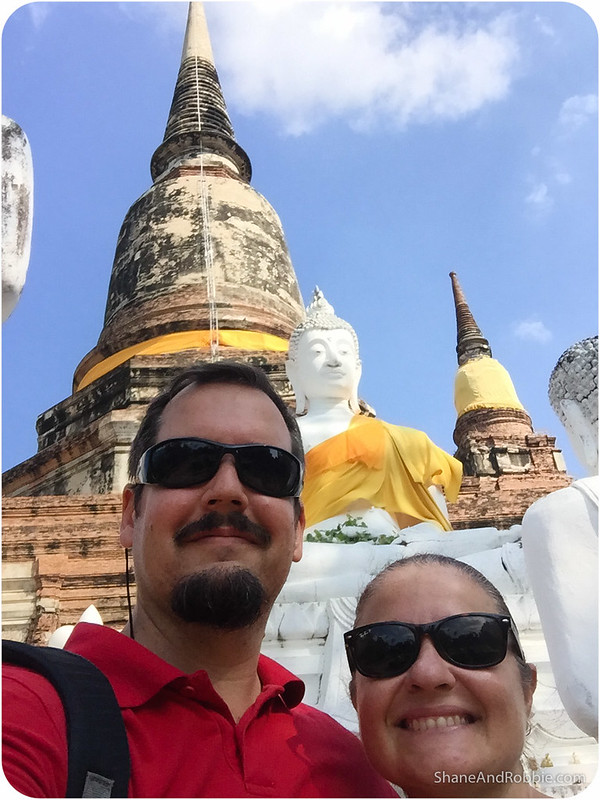