After our brief foray into Kuala Lumpur’s Chinatown last night, we decided to join a tour for today’s explorations of the city. The sights are quite spread out so having someone to take us around was definitely convenient, though, like all guided tours of this nature, a bit tedious at times. Still, we got to see some grand sights, including the National Mosque of Malaysia, the Hindu temple within Batu Caves, the Malaysian Royal Palace, and the Petronas Twin Towers – KL’s most famous icons.

First stop for the day, however, was the National Monument, a sculpture that commemorates those who died during World Wars I and II, and during Malaysia’s civil war* (known locally as the “Malaysian Emergency”).

*The Malaysian Emergency was a guerrilla war fought between Commonwealth armed forces and the Malayan Communist Party (MCP) from 1948 to 1960. Interestingly “emergency” was the colonial government’s term for the conflict; the rubber plantations and tin-mining industries had pushed for the use of the term “emergency” since their losses would not have been covered by Lloyd’s insurers if it had been termed a “war”. The MCP was defeated but continued to cause issues until 1989 when an official cease-fire was announced. Malaysian independence followed not long after the end of the “emergency”. 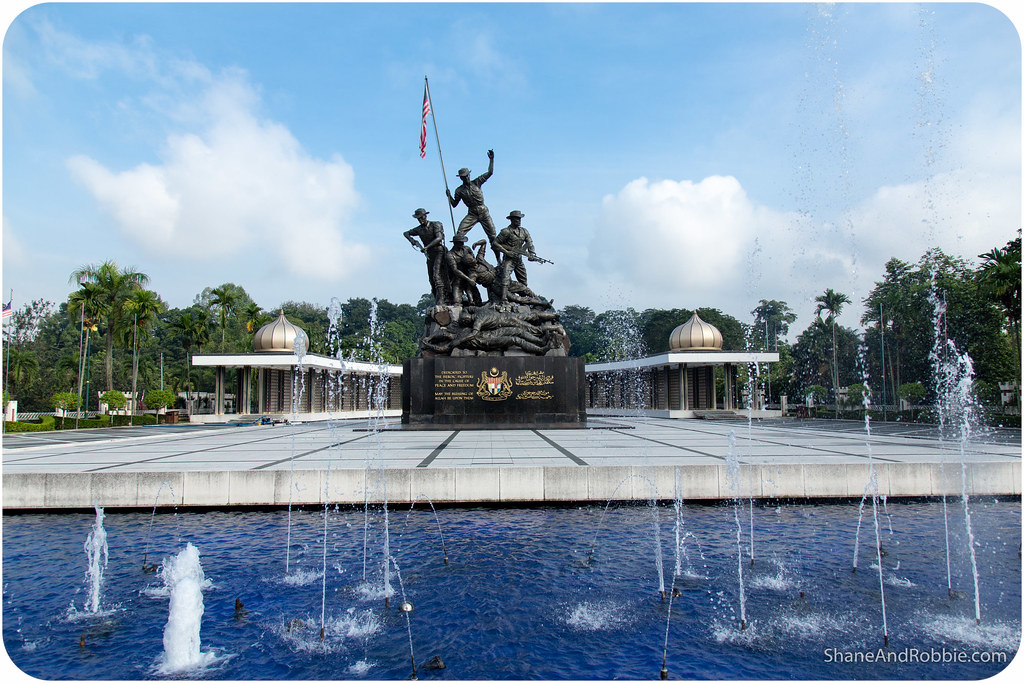 Despite how big and busy it is, one thing that struck us immediately about KL is how green the city is – there are plenty of pockets of forest and parklands between the sky scrapers and modern apartment buildings. The gardens surrounding the war memorial in KL are just one example of the many green spaces to be found around the town. 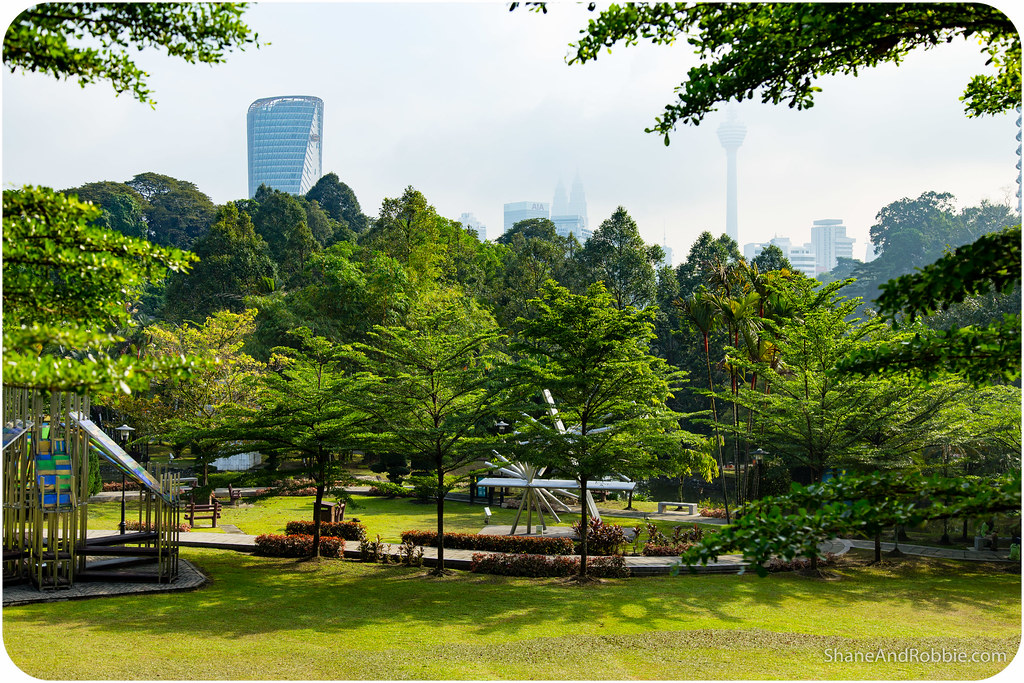 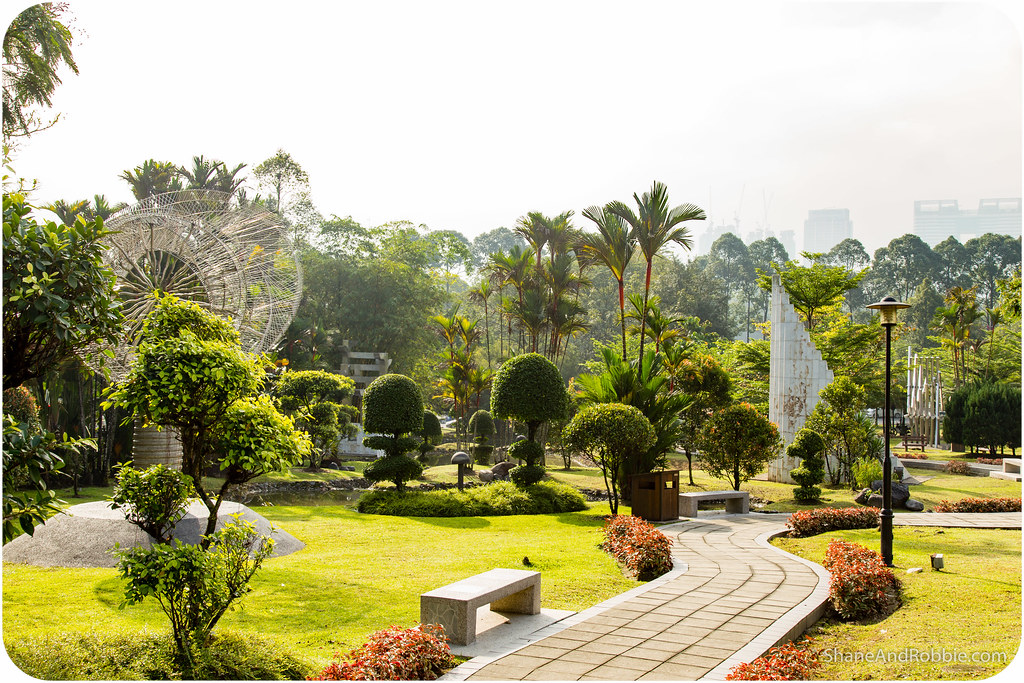 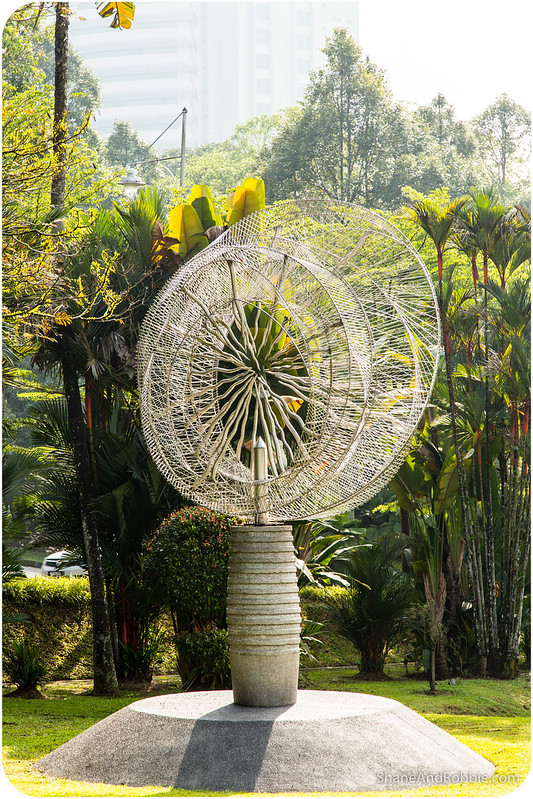 From the National Monument we made our way to the Masjid Negara, or State Mosque, which was built in 1965 on the site of a church. The mosque is typically Brutalist in design, made of reinforced concrete and supposedly symbolic of the aspirations of a then newly independent Malaysia. Able to hold 15,000 worshippers and set within 13 acres of landscaped gardens, the mosque was certainly large but lacked the serenity and beauty of other mosques we’ve been to. Parts of it were lovely but generally it seems 1960s architecture just doesn’t inspire us much. 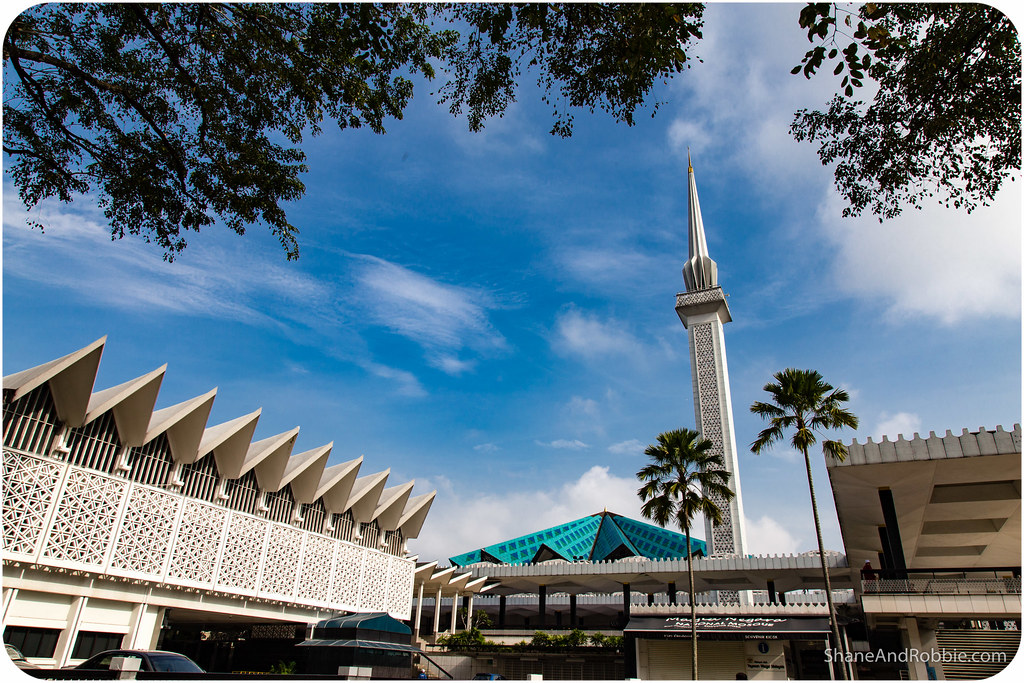 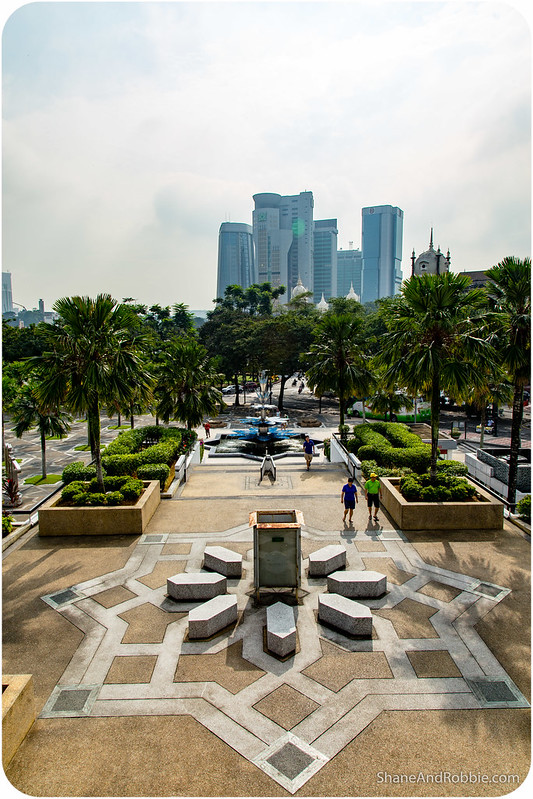 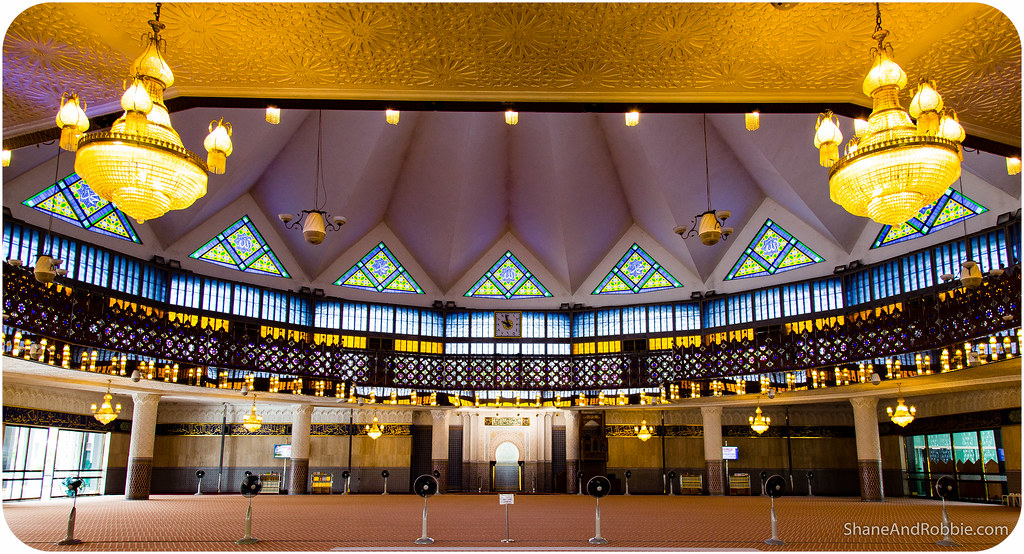 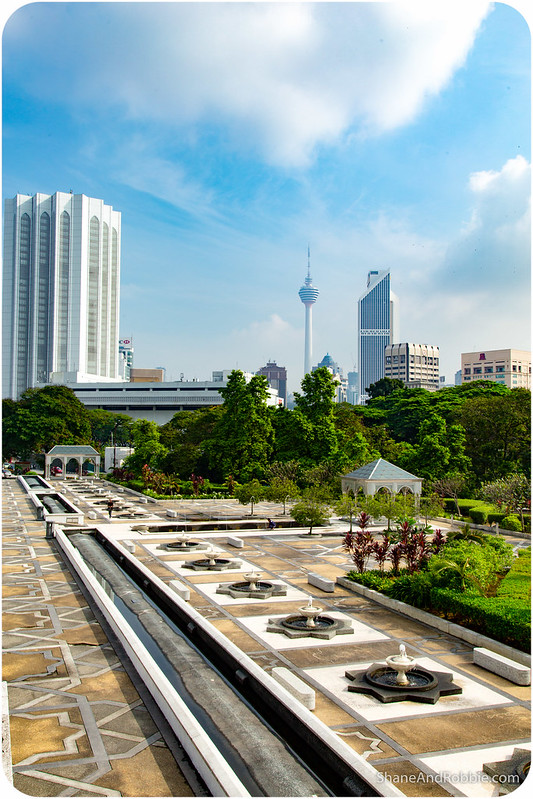 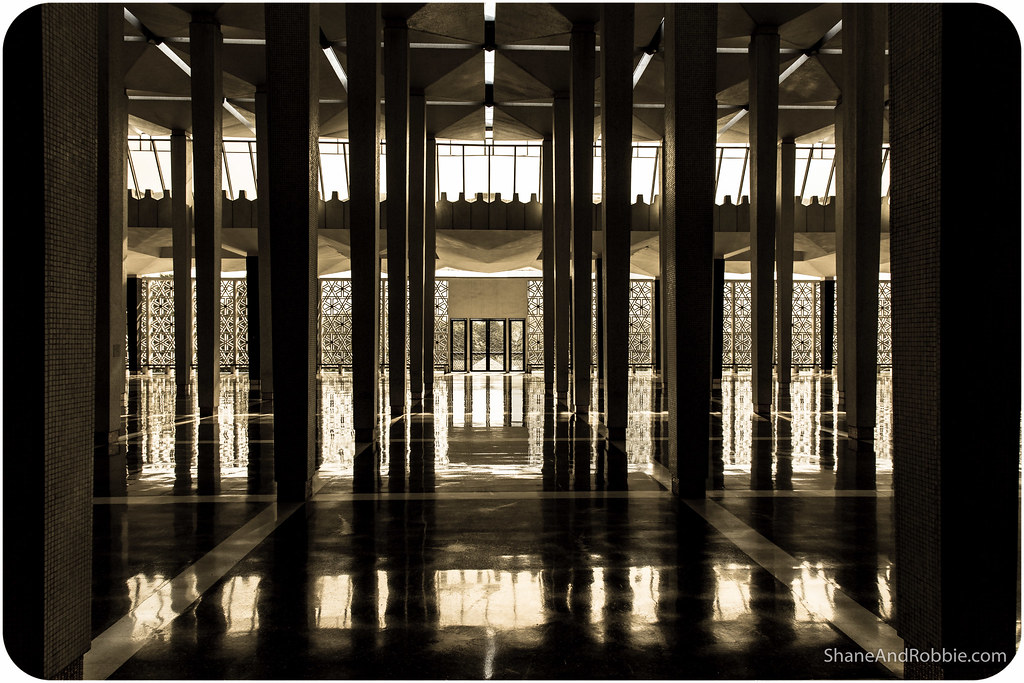 Visitors to the mosque have to cover up for modesty, with free robes available for men and women when you enter. As a woman I also had to don a head covering which, though comfortable enough, gave me a new appreciation for how hot it must be for Muslim women under all that garb! 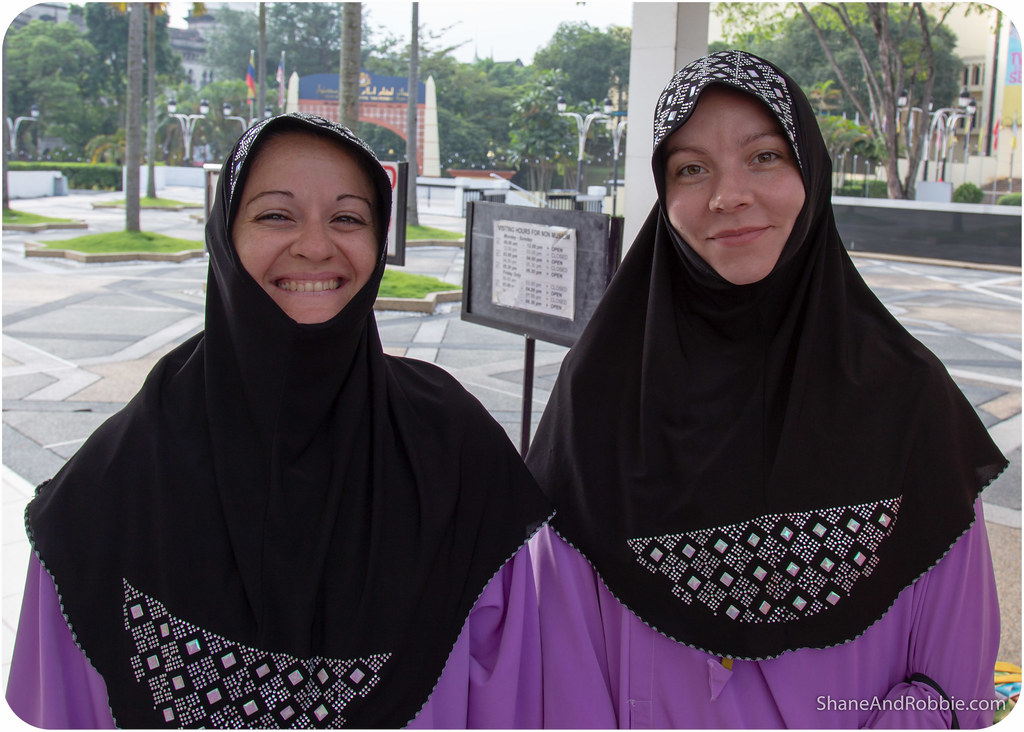 Next photo stop: the Istana Negara (i.e. National Palace), the official residence of the Yang di-Pertuan Agong, the King and head of state of Malaysia.

Interestingly the Yang di-Pertuan Agong is an elected role in Malaysia. The office was established in 1963 when the Federation of Malaya gained independence from Britain and is shared amongst the 9 rulers of the Malay states (all of which were previously sultanates). The King is formally elected to a 5-year term by and from among the 9 hereditary sultans; after his term expires, the sultans hold a new election, in which the incumbent can not be re-elected. Seems like a fair system, though given how little constitutional power the King has here, the role is really just symbolic in nature. 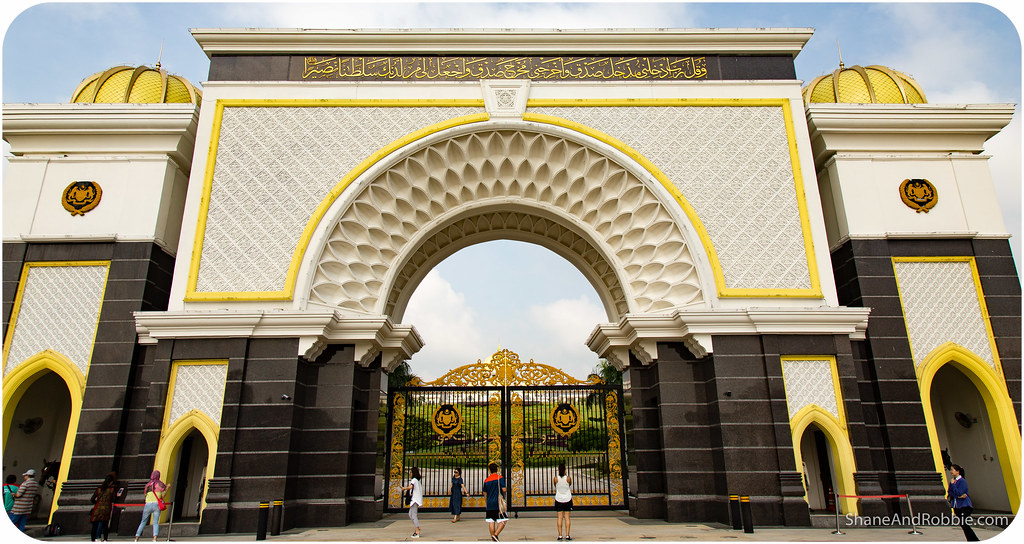 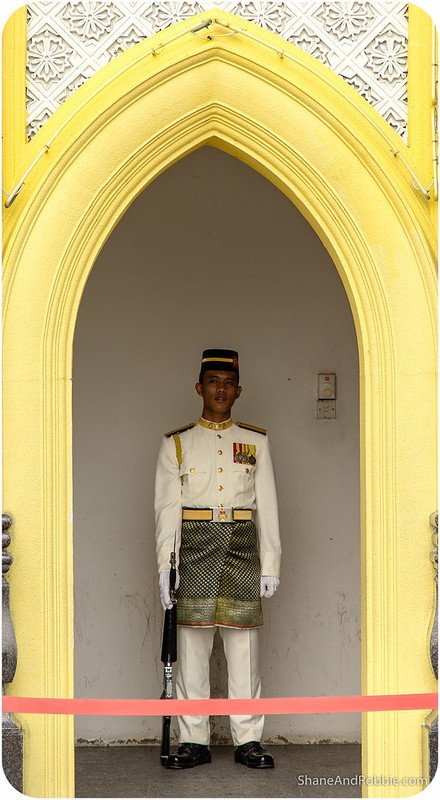 One of Malaysia’s most distinctive geographical features is the labyrinth of caves found within the country’s limestone peaks. KL’s most famous caves are the Batu Caves, which house a large Hindu temple complex dedicated to Lord Morugan. 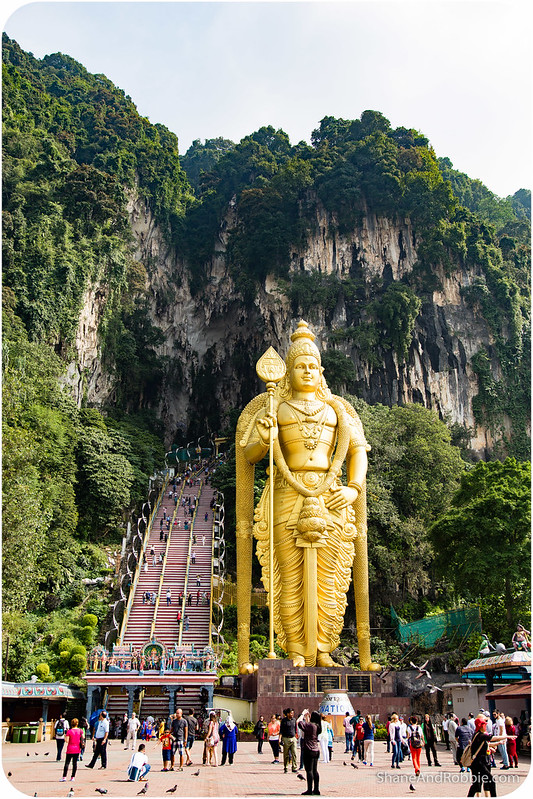 Rising almost 100m above the ground, the Batu Caves temple complex consists of 3 main caves and a few smaller ones. The biggest has a very high ceiling and features ornate Hindu shrines. To reach it, we had climb a steep flight of 272 steps, sweating profusely and dodging monkeys* the whole way.

*The wild simians that lurk around the caves have realised that humans often have tasty treats in their hands. As a result your every possession (including mobile phones and cameras) must be carefully guarded, lest the monkeys play “snatch and grab” with your valuables. Even worse some of the monkeys have been known to get aggressive and territorial and bite unwary tourists! 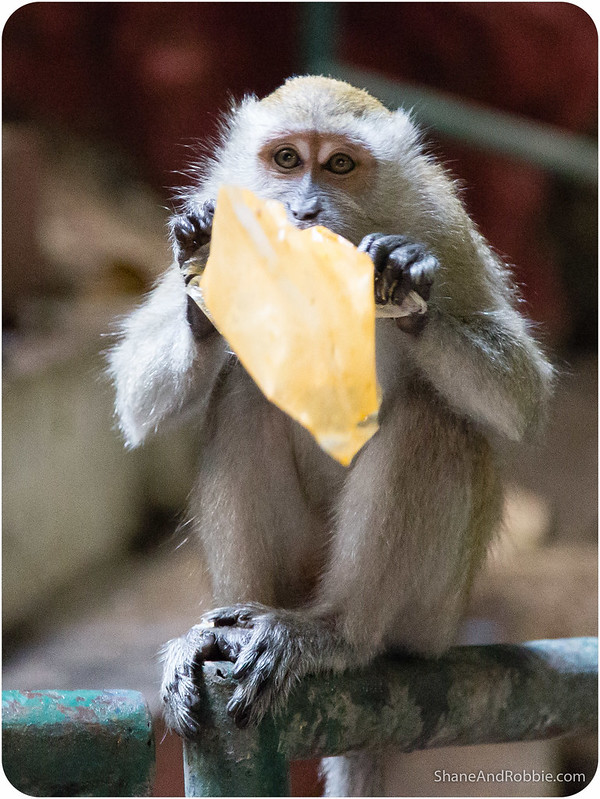 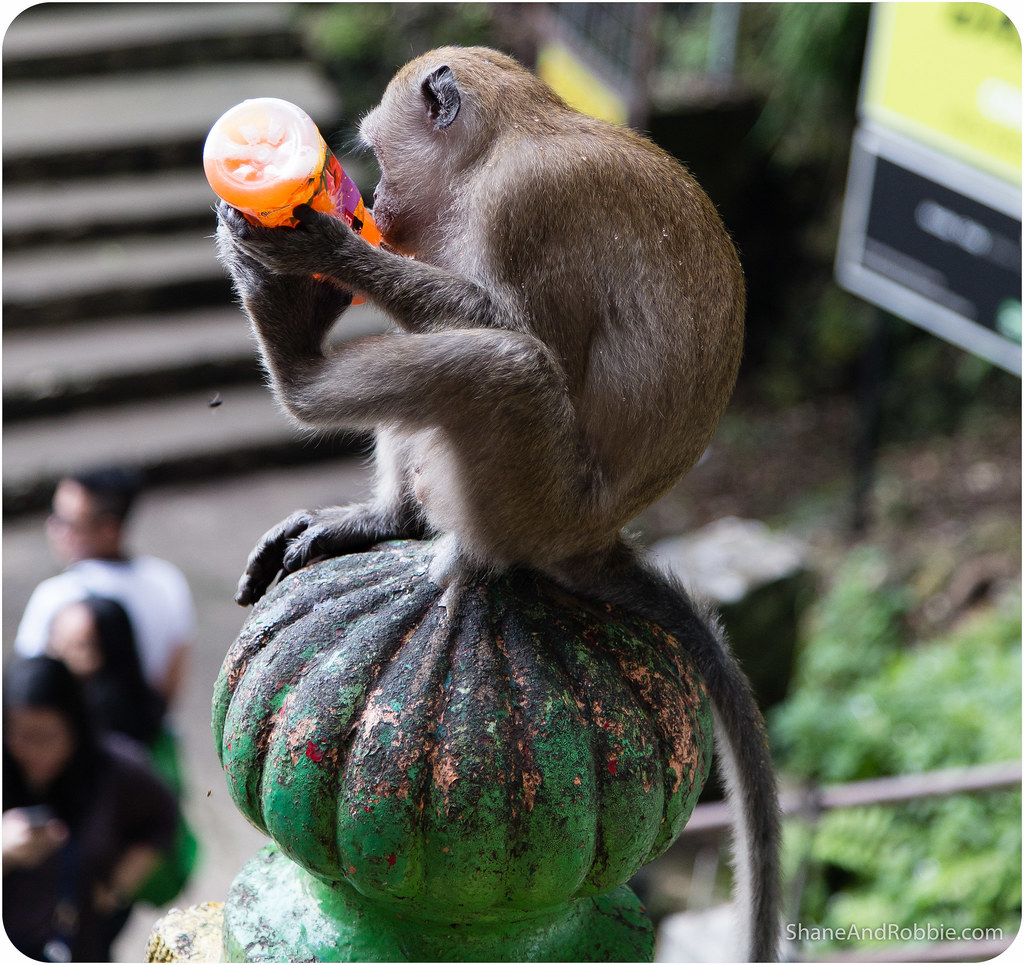 The cave is one of the most popular Hindu shrines outside India, and the focal point of Hindu festival of Thaipusam* in Malaysia. It’s also a magnificent example of nature’s work, with its lofty ceiling and interestingly shaped rock formations.

*That’s the festival were people whip themselves up into a frenzy of religious ecstasy and pierce their bodies with all manner of sharp objects. 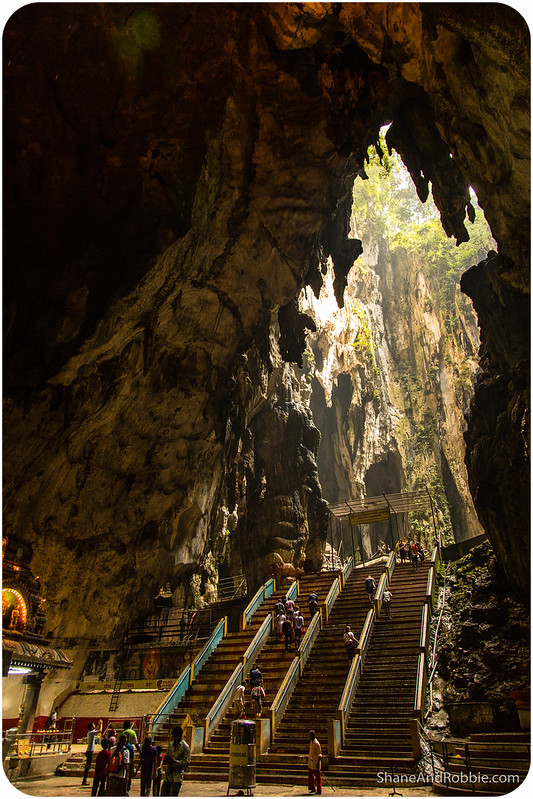 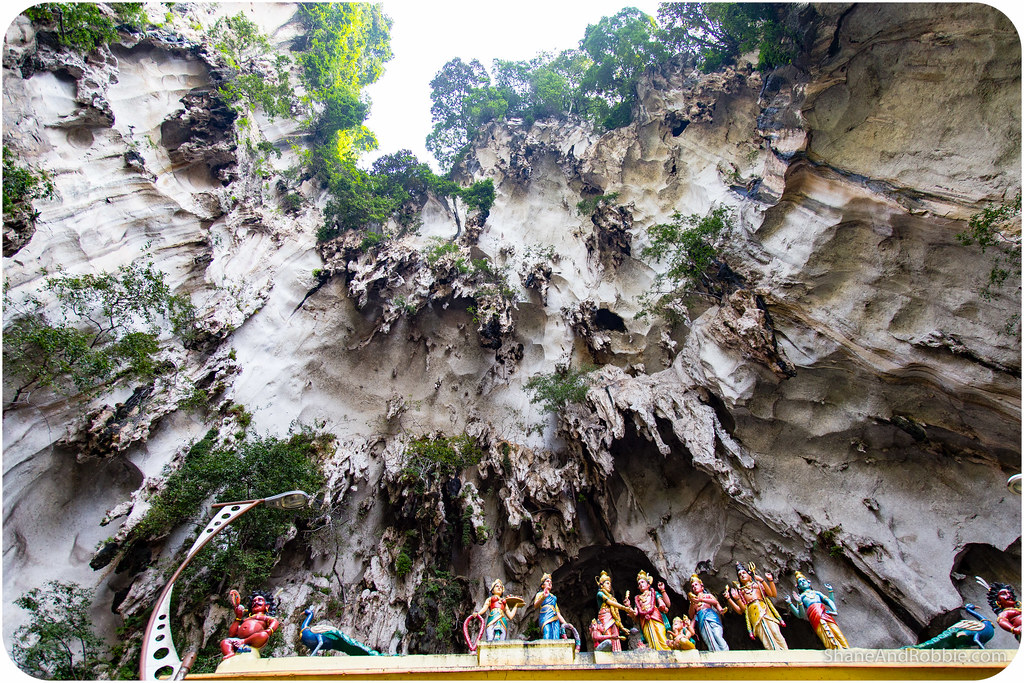 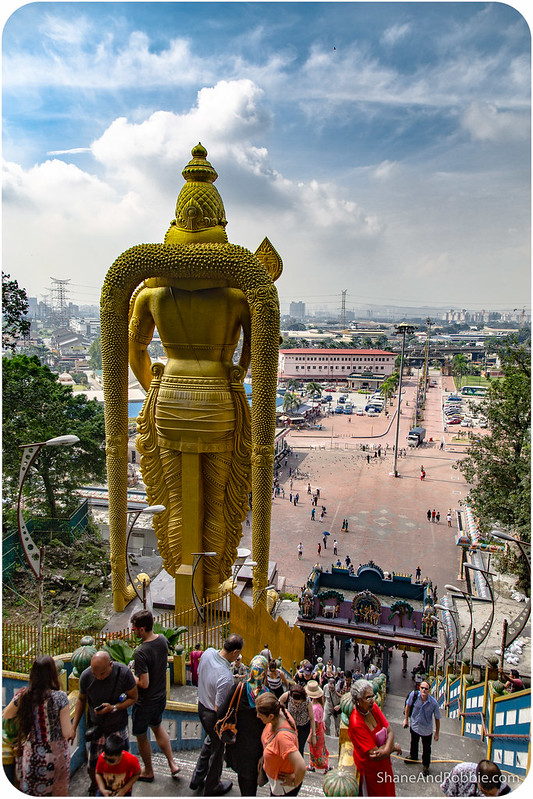 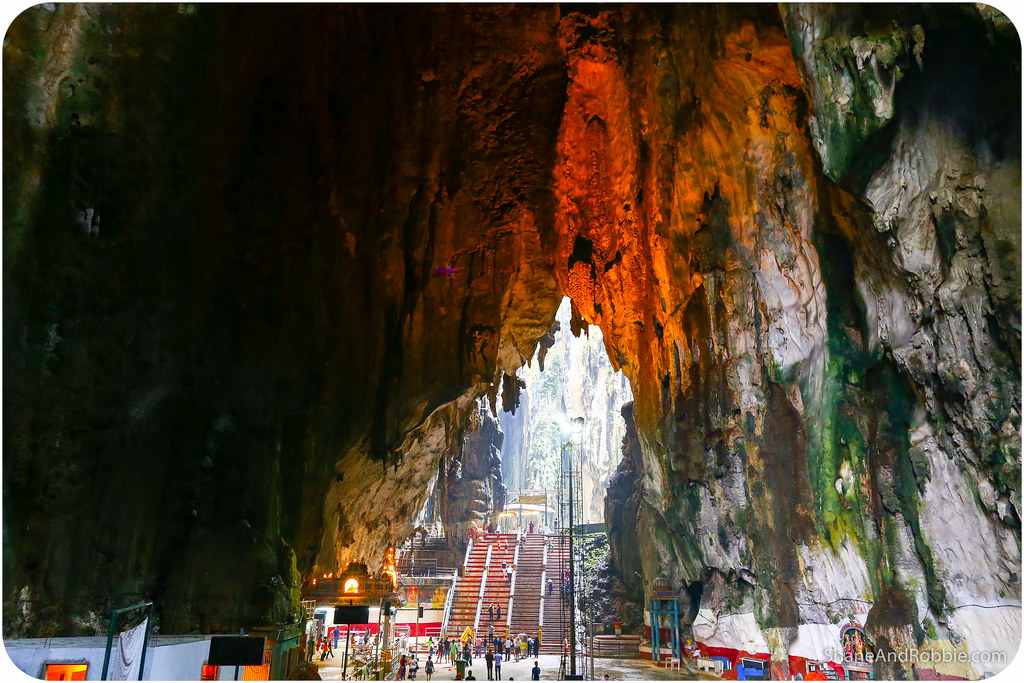 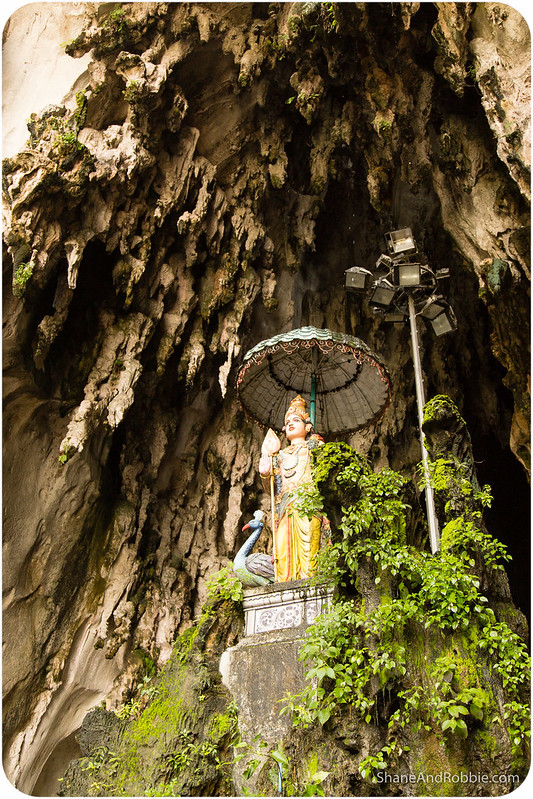 By this stage it was lunch time and we were taken to the Royal Selangor Pewter Factory for a tour, a midday repast, and some shopping. We’re not really in the market for super-expensive pewter trinkets, but it was interesting to learn how the tin mined from around KL, mixed with copper and antimony, is used to make pewter. 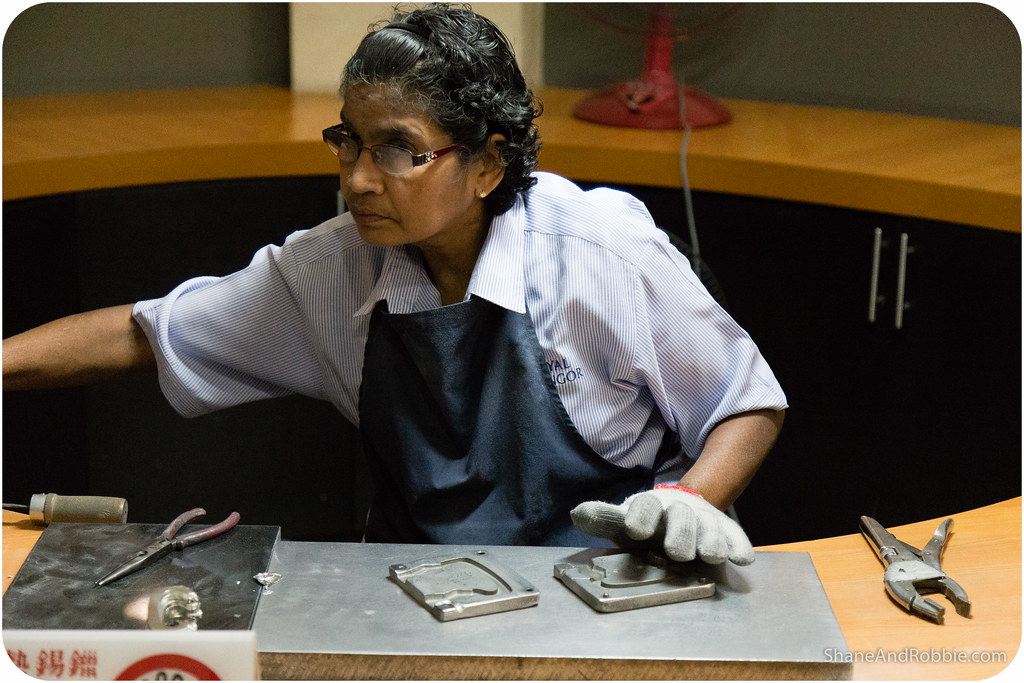 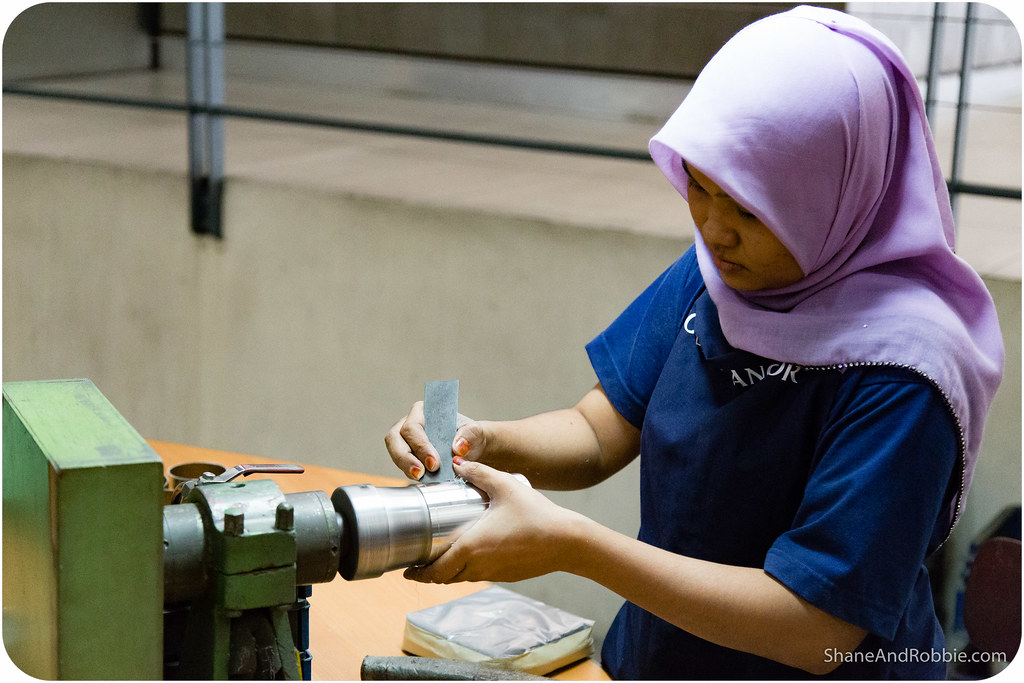 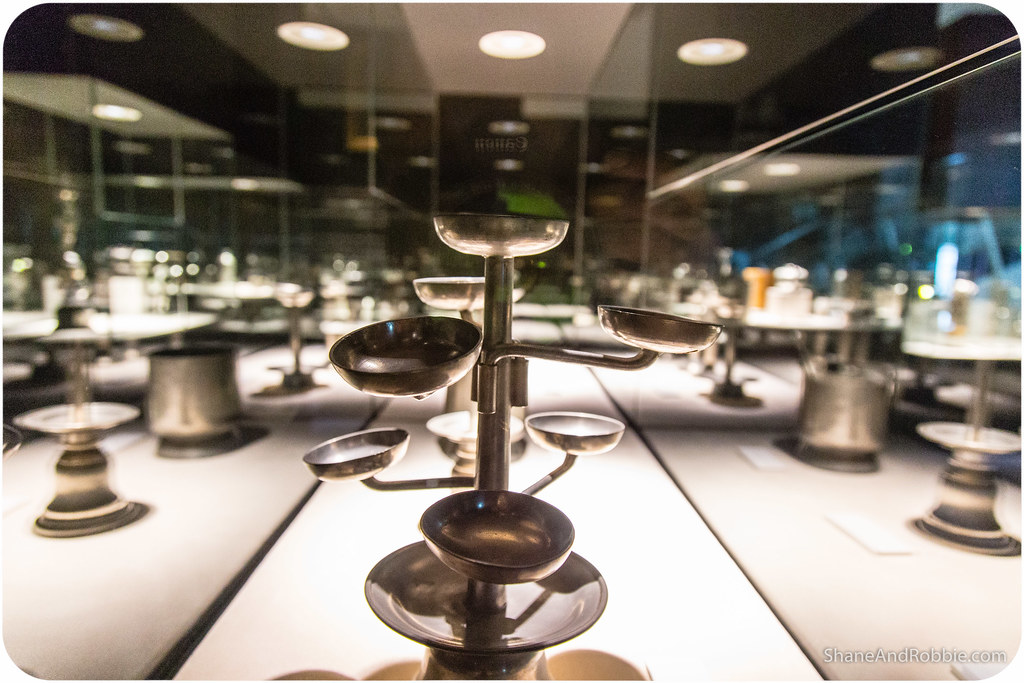 Royal Selangor the largest pewter manufacturer and retailer in the world, and was founded in 1885 by Chinese migrant Yong Koon. The company is still run by his descendants and sells tankards, photo frames, tumblers, and other household items all over the world. 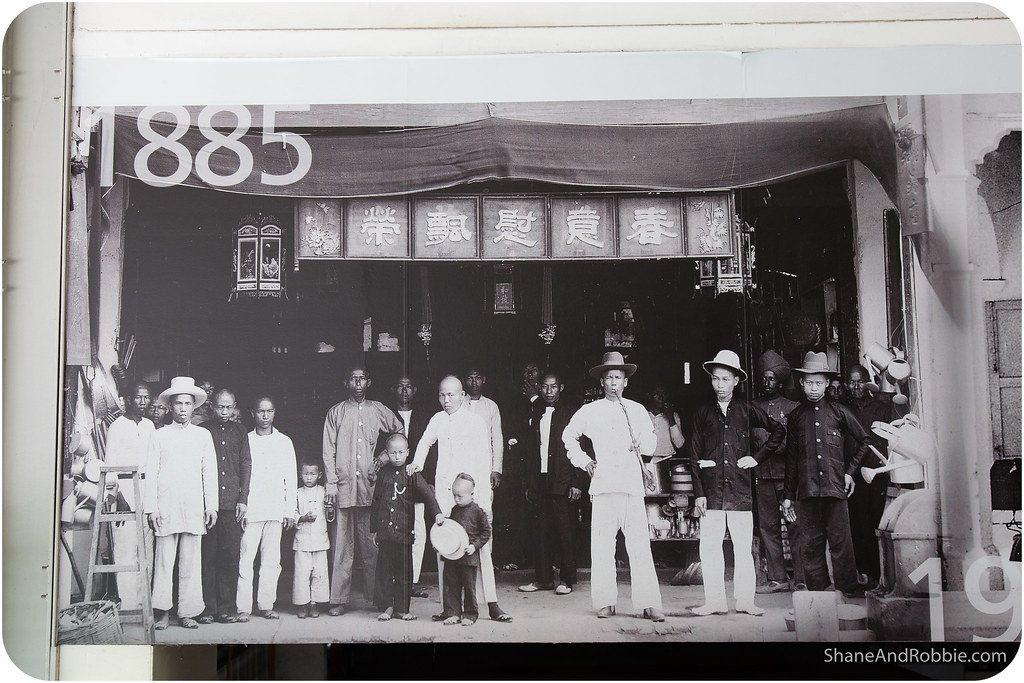 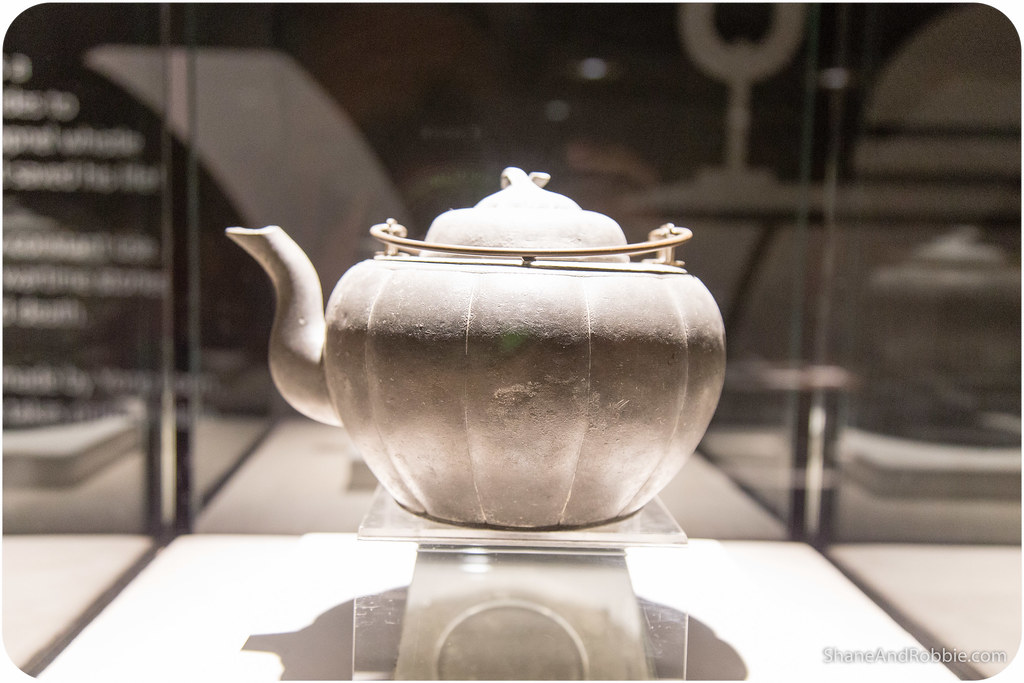 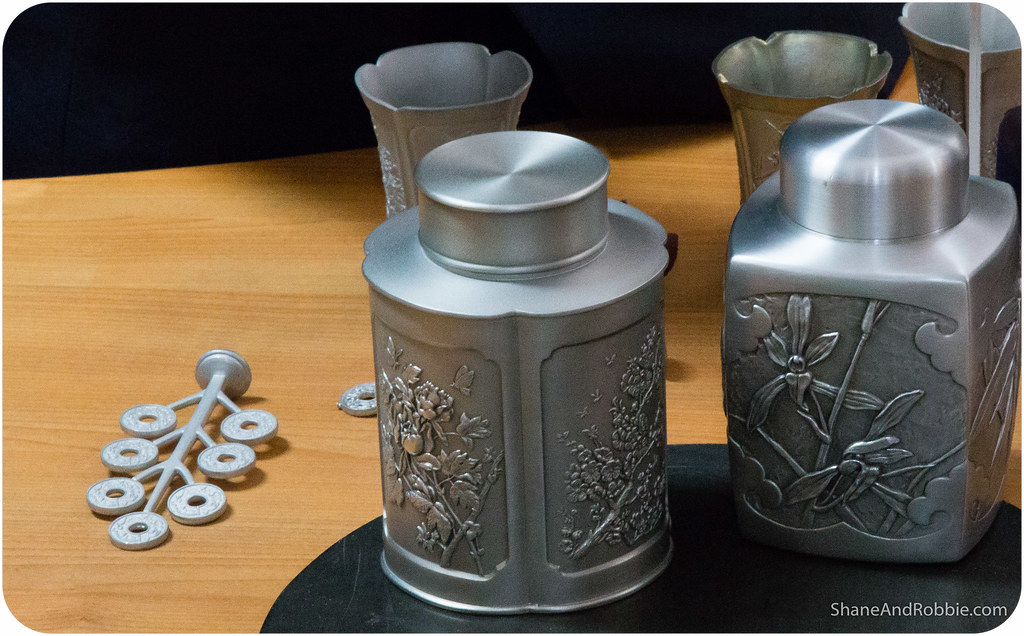 The world’s largest pewter tankard was made by Royal Selangor in 1985 to commemorate its centenary and is on display at their headquarters. At 2m tall and with a capacity of 2,800L, that’s one big mug! 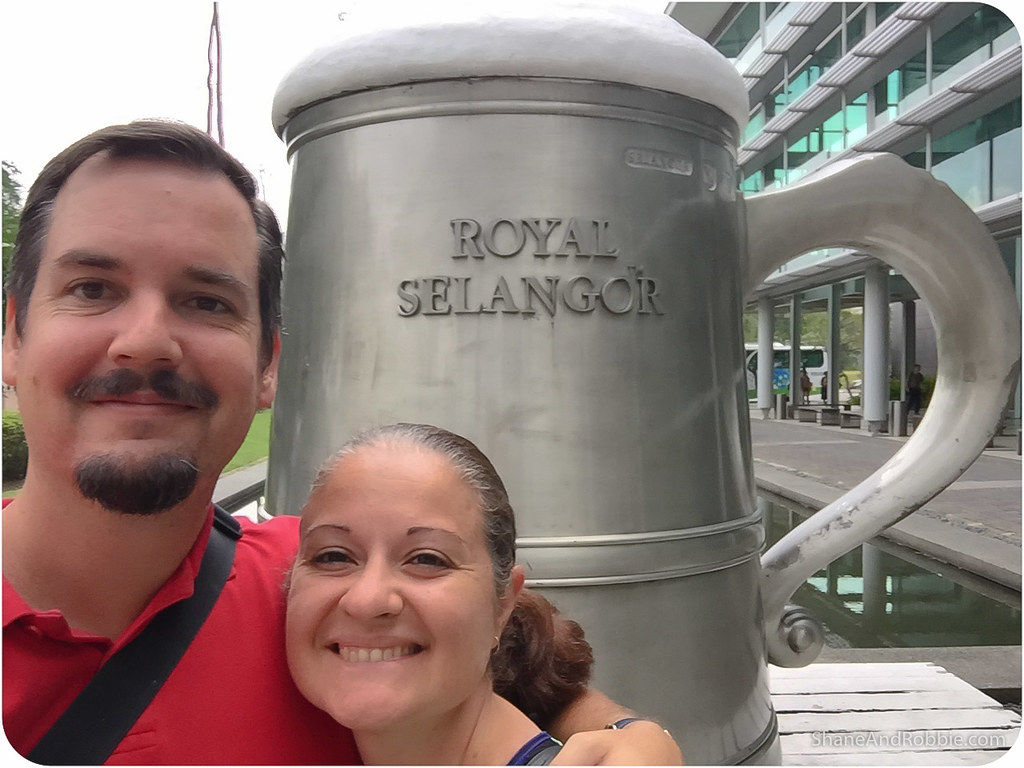 We were then taken to the Menara KL Tower – Kuala Lumpur’s 421m-high TV tower. Built in 1995, the KL Tower was the world’s tallest tower for a while (now it’s just the 7th tallest), and affords some great views across the city from the observation deck. 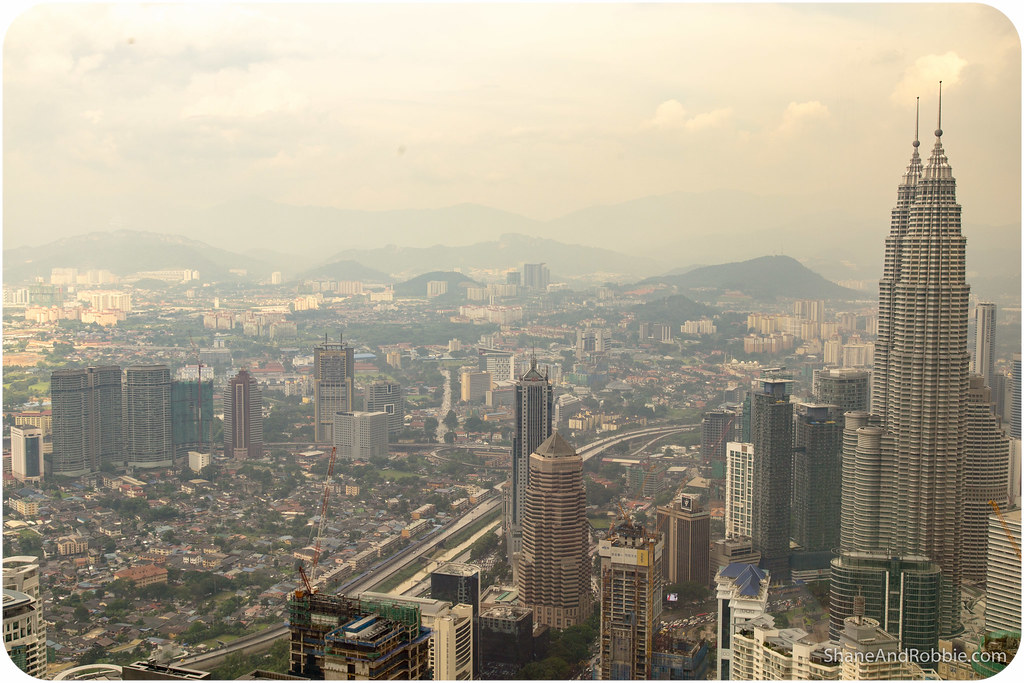 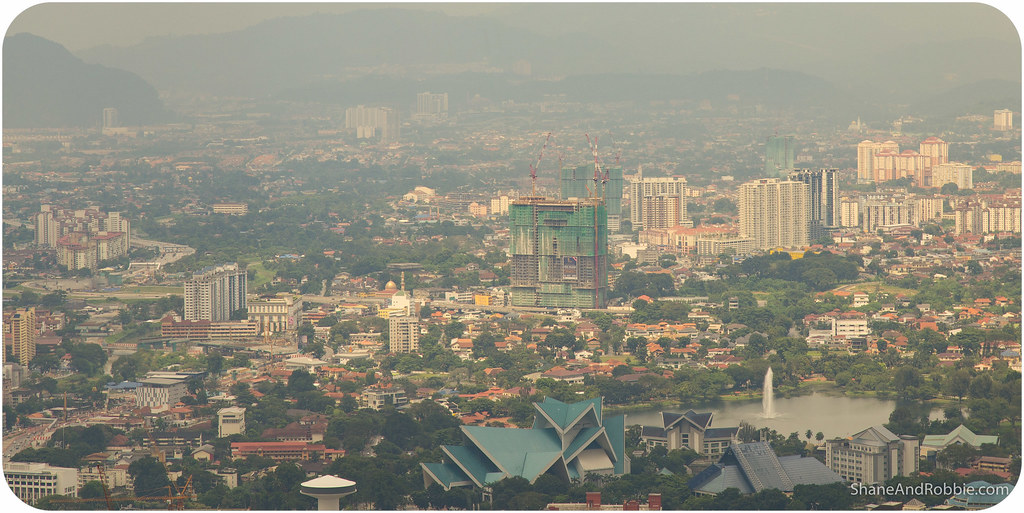 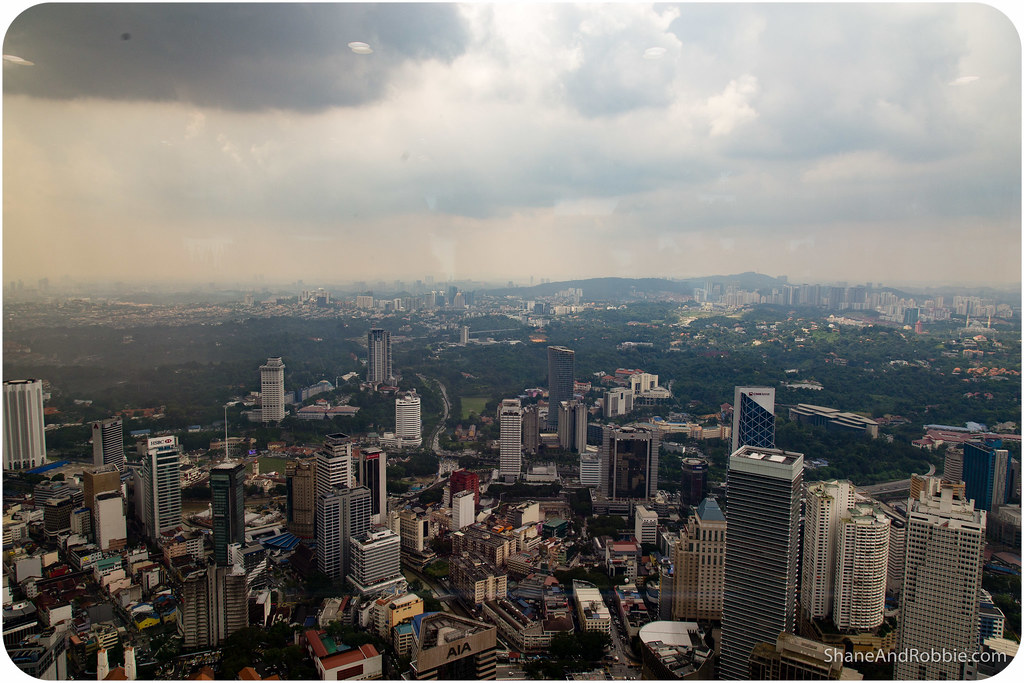 Last, but certainly not least, we were taken to the Petronas Twin Towers – the most famous landmark of Kuala Lumpur. Built in 1998 as the headquarters for Malaysia’s government-owned petroleum company, the Petronas Towers house offices, a shopping mall, an art gallery, a music hall, an aquarium, and a science museum. We ditched the tour at this stage at spent the rest of our afternoon at the towers, enjoying the Christmas decorations and shining lights of the mall.

We even had dinner on the 4th level food court of the Petronas Towers – another awesome meal of curry laksa noodle soup (for me) and beef hantu curry (for Shane). Malaysian food is rich, coconutty, spicy, sour, salty, and oh so tasty! We could get used to this…