Borneo boasts one of the most biodiverse equatorial habitats in the world; its also home to one of the oldest and most impenetrable rainforests in the world. Which is why for most people Borneo evokes images of dense jungles, hidden animals, and head-hunting natives living in long houses. The reality is all of that and much more… well, perhaps minus the head hunting tribes*. Today we got a glimpse of the majesty and wonder of this tropical wilderness and it was incredible.

* Longhouses throughout Borneo were once decorated by rows of shrunken, preserved human heads – a testament to the hunting prowess of local tribesmen. These days those specimens are generally only found in museums as head hunting has been outlaws by the Malaysian government. We have been assured, however, that head hunting is still practiced by some tribes in the most remote depths of the Bornean jungle. The Dayak tribe from Kalimantan (the Indonesian part of Borneo) in particular are known as avid head hunters. Like most indigenous Bornean tribes, the Dayaks are animists who believe that everything living is endowed with a spiritual identity and that the soul of a person or animal resides in the head. Therefore by taking a head you capture their soul as well as their status, strength, skill, and power. Collecting heads, therefore, is akin to collecting XP.

Our first escapade into the jungles of Borneo was by river boat once again. We set off early this morning for a dawn safari along the Kinabatangan River. The early morning fog dampened all the sounds around us and reduced our visibility to just a few metres, which made animal spotting quite challenging. I don’t who was more surprised, therefore, when we came across one of the local salt water crocodiles basking on a beach! 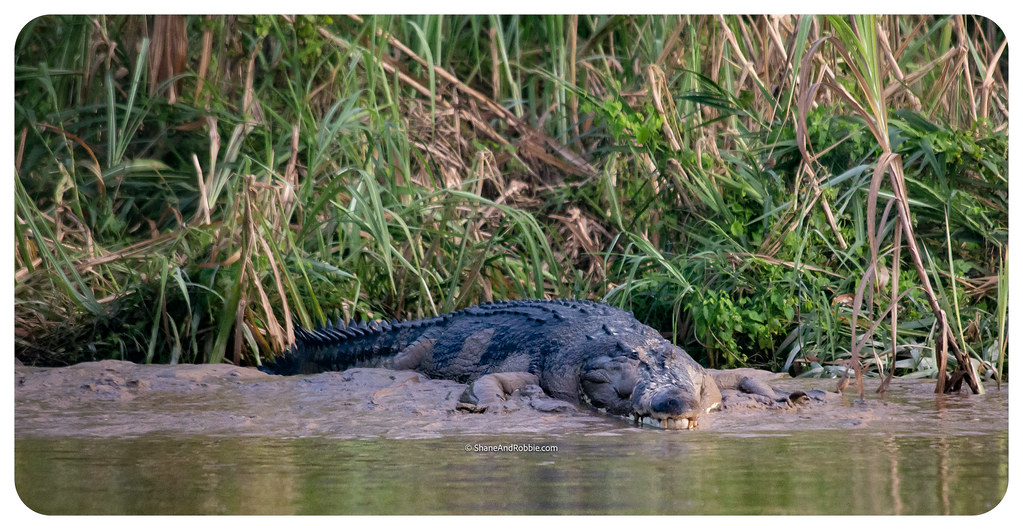 This reptilian predator is commonplace hereabouts and remains the largest riparian predator in the world. As its name implies, this species of crocodile can live in marine environments, but usually resides in brackish mangrove swamps, estuaries, and lower stretches of rivers like the Kinabatangan River. Growing to 6-7m in length, these crocs are not averse to the taste of human flesh*. So when the guide said to keep our hands inside the boat, we quickly complied!

*There are a few reported cases of crocodile attacks along the rivers of Borneo every year, usually when villagers are out alone fishing, washing clothes in the river, or collecting water. 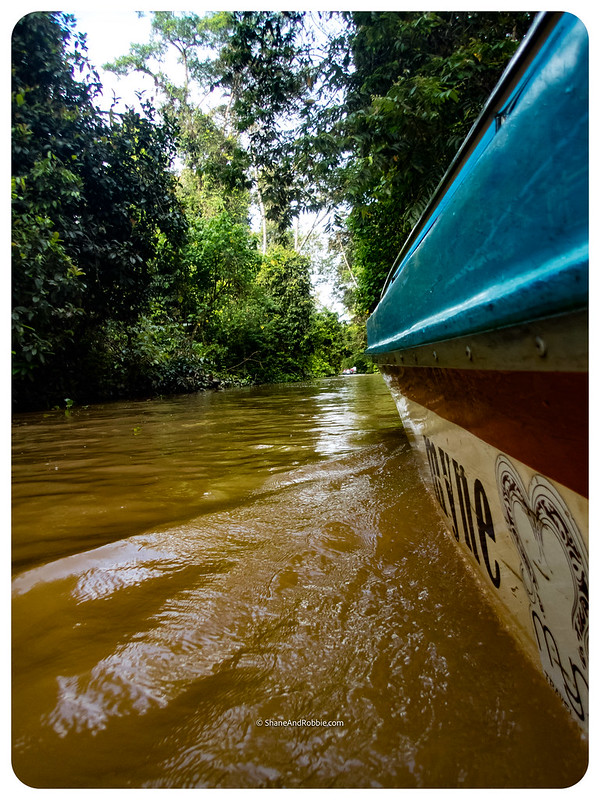 Further on we once again came across the young male orangutang we saw yesterday. Barely awake, he was sitting next to his leafy nest enjoying a breakfast of wild figs. Nonplussed by our presence far below, he continued his repast uninterrupted, raining seeds and fig juice on us below. 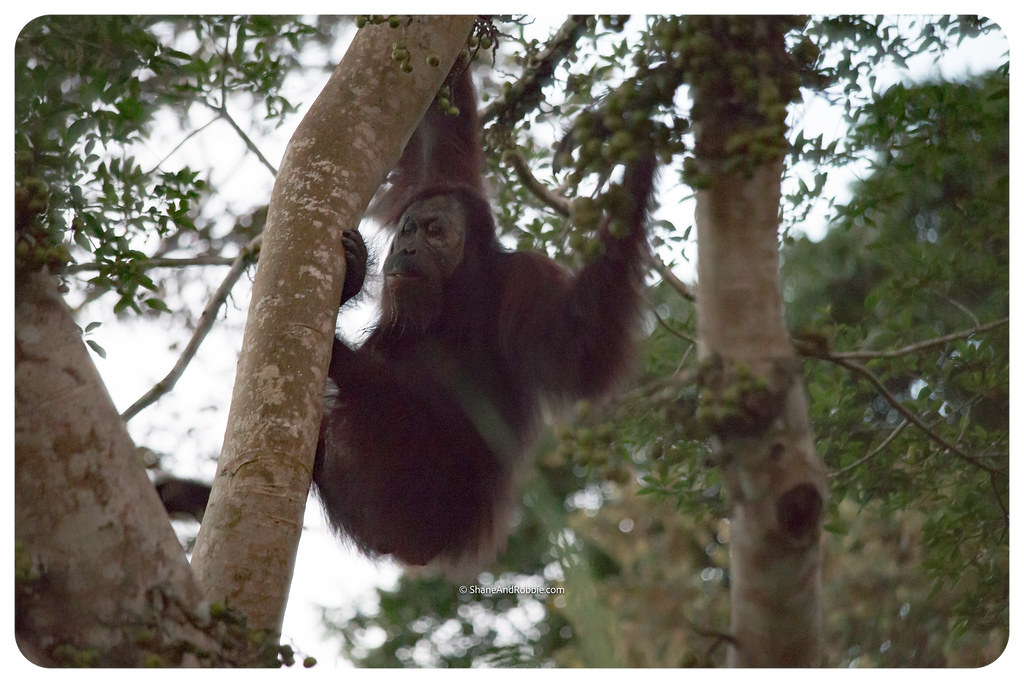 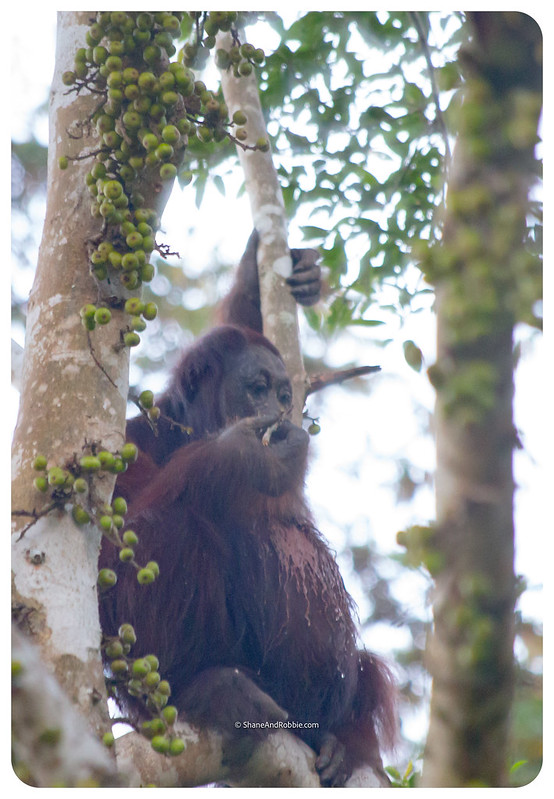 Aside from the orangutang and the crocodile, the river was quiet this morning. Though we did see quite a few birds, including a fishing eagle, herons, egrets, and a beautifully coloured kingfisher. 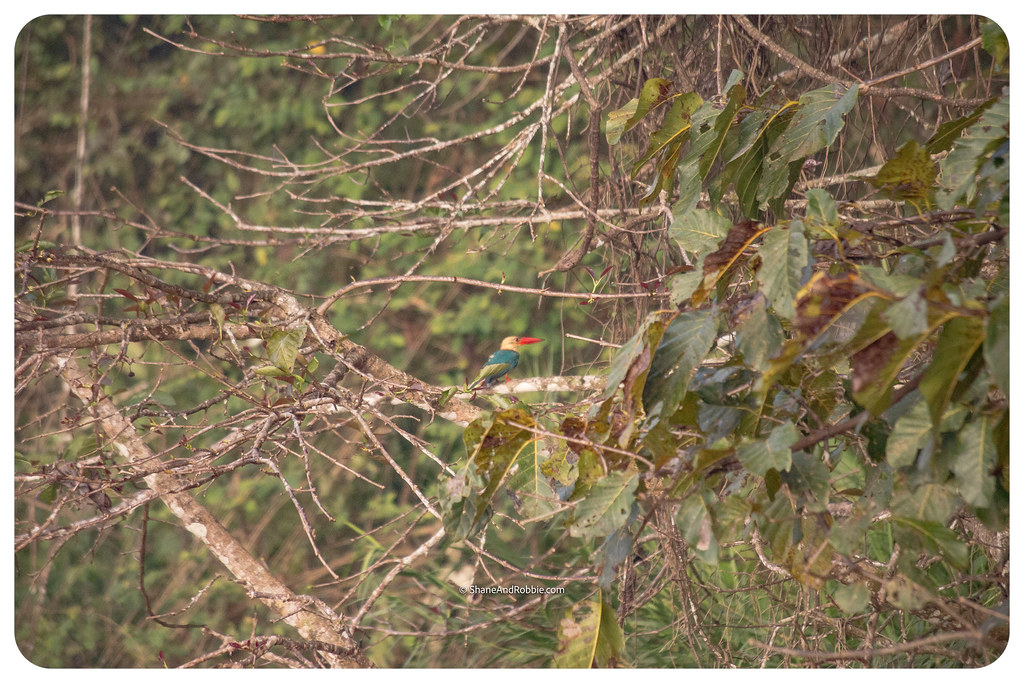 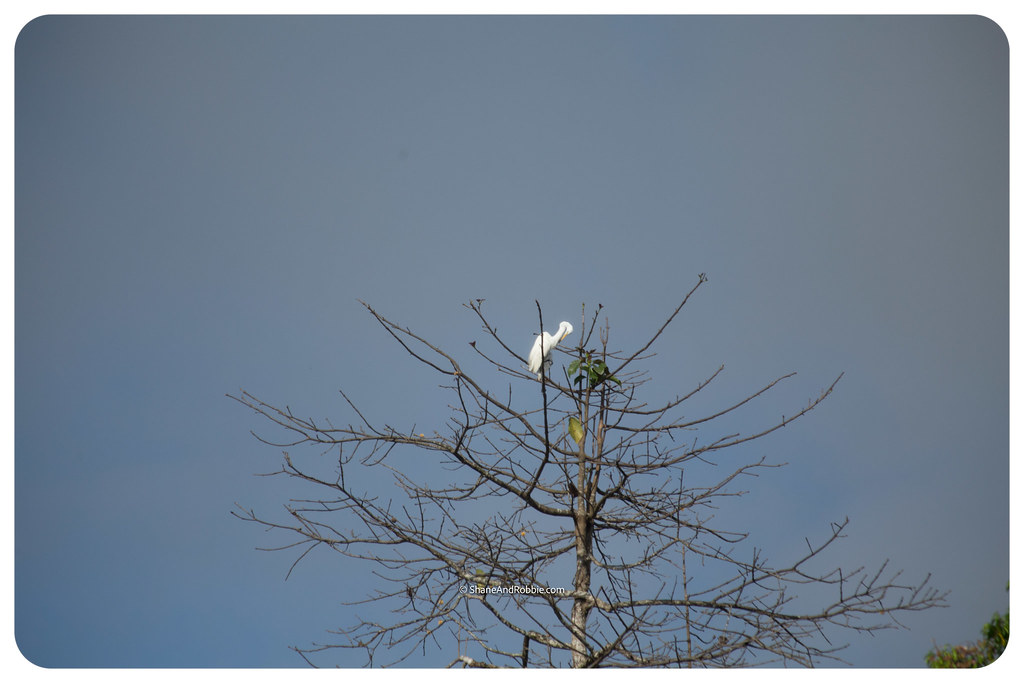 Returning from our morning river safari we were welcomed by a hot breakfast and fresh coffee*. After which we decided to go on a hike (aka: land safari) through the jungle around the lodge.

*Bearing in mind that the coffee here in Malaysia is not the aromatic, lightly caffeinated stuff we’re used to – these are robusta beans not arabica beans. Essentially this means the coffee here packs a serious caffeinated punch and lingers on the tongue, leaving a burnt tyre after-taste. It’s also usually quite sweet as the traditional way to serve it is with condensed milk. It’s certainly an acquired taste, but it does the job! 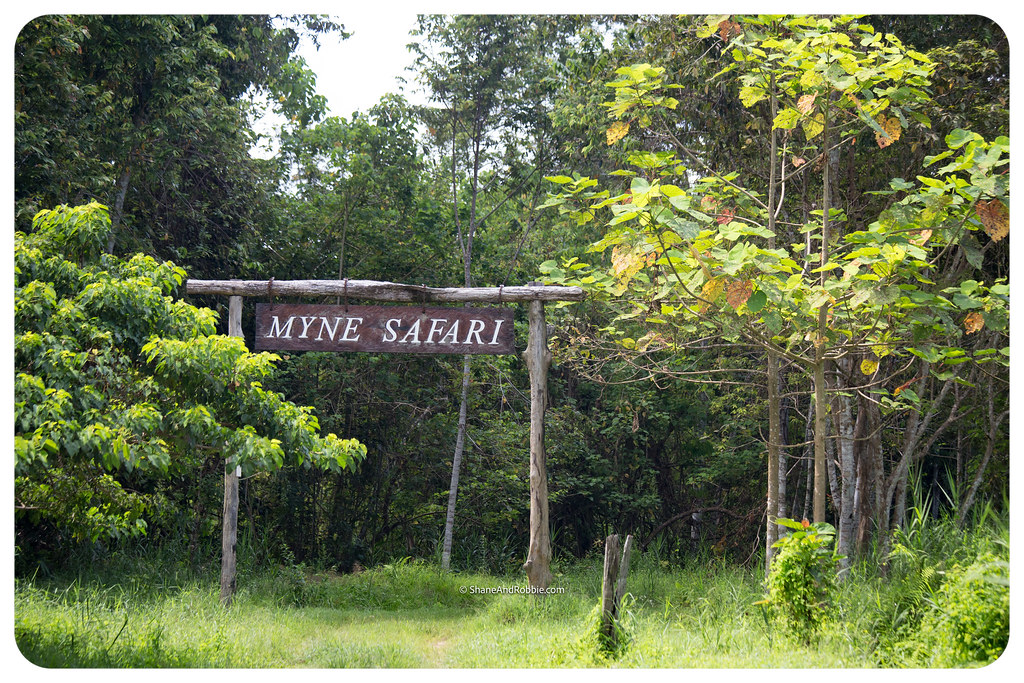 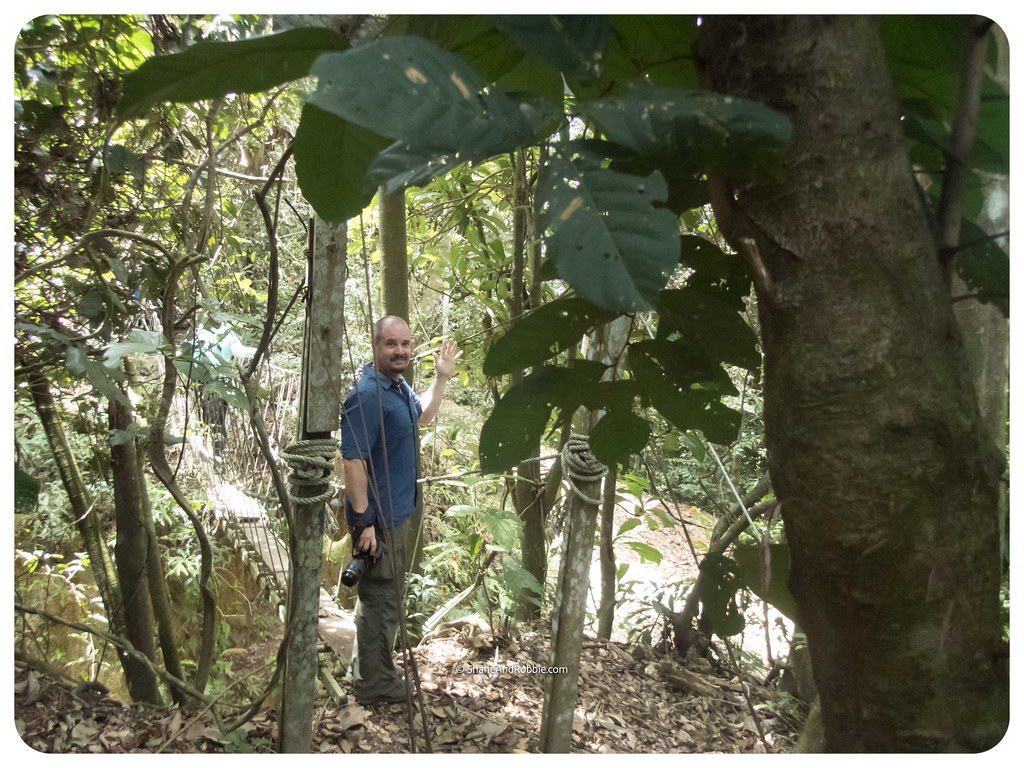 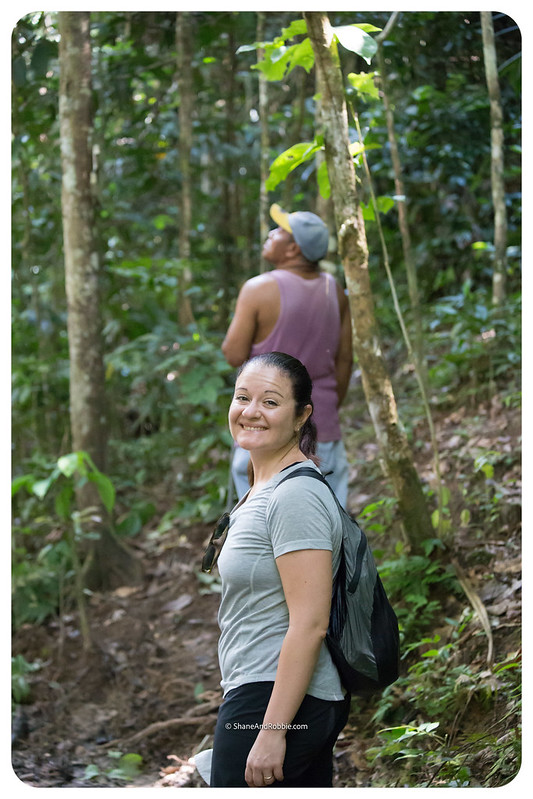 We really didn’t expect to see much, especially given how close to human habitation we were the whole time, but surprisingly we did get to see some very fresh and large elephant poop that indicated animals DO come pretty close to the lodge! There were various groups of monkeys we saw along the way, all of them the ubiquitous long tailed macaques. These opportunistic omnivores are sacred in some parts of Asia and pests in others, but always fascinating to watch. 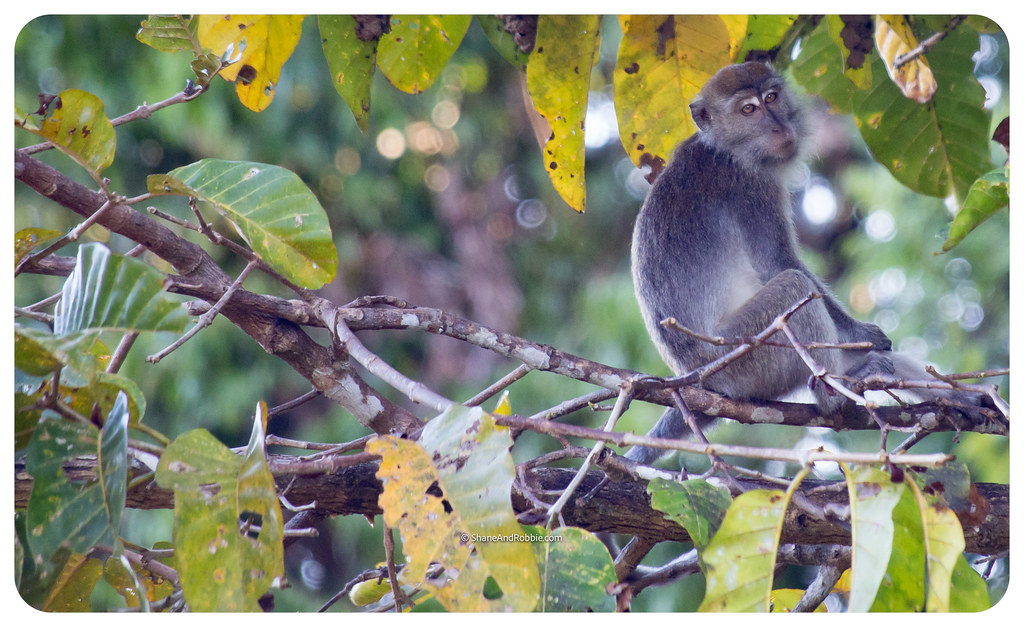 The walk only took us a little over 90 minutes, which may not sound like much until you’re trekking up and down steep hillsides in 40C heat, at 90% humidity, fighting mosquitoes, sand flies, leeches, and various other jungle bities along the way. It was hot, sweaty work and we were glad to get back to the lodge in time for a shower before lunch. 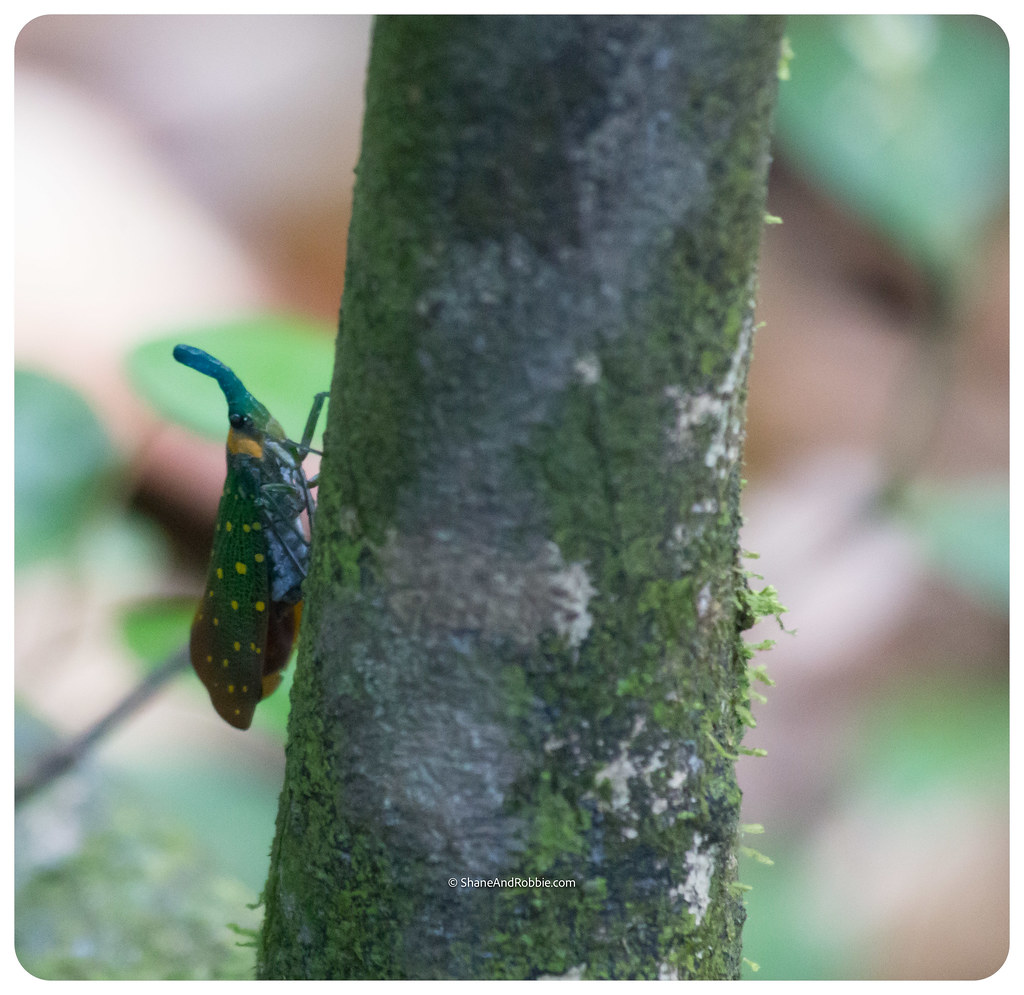 The hottest part of the day around here isn’t good for much but relaxing, but by 4:00pm the heat started to recede and we were ready to head off for our afternoon river safari. 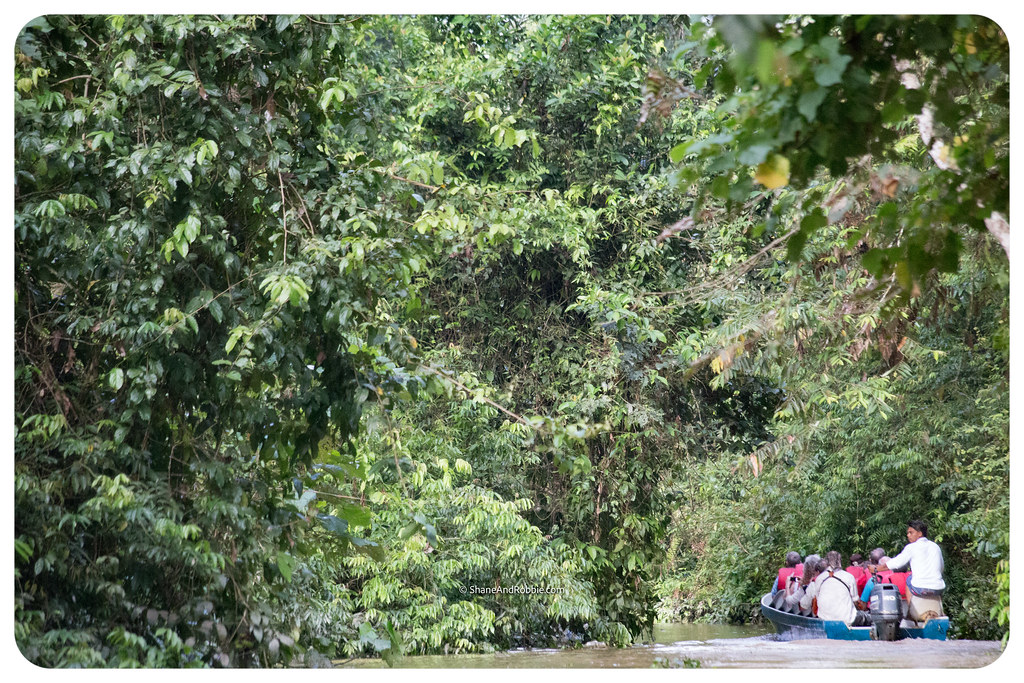 We saw the now familiar profiles of proboscis monkeys, orangutangs, and long tailed macaques in the afternoon. Additionally we drifted right under a sleeping gold-ringed cat snake. This nocturnal serpent is venomous and known to be aggressive if disturbed. Not as venomous or aggressive as its cousin the spitting cobra, which is also endemic to this part of the world, but certainly scared enough that we were happy he did not awaken whilst we were under him.

Nearby we stopped to watch a group of Wrinkled Hornbills as they fed on palm fruits. These colourful birds are just 1 of 8 hornbill species native to Borneo. All of them are characterised by their large bills and nesting habits*. In the case of the Wrinkled Hornbills the males have a yellow and red beak, whereas female have just yellow ones. The group we saw was two dozen strong and focussed on finding food in the nearby palm plantation anointing the rainforest.

*Female hornbills are actually sealed into a hollow tree while they are nesting and are fed by their male partners through a small hole. When the fledglings are ready to fly, the mother breaks out of the mud nest. 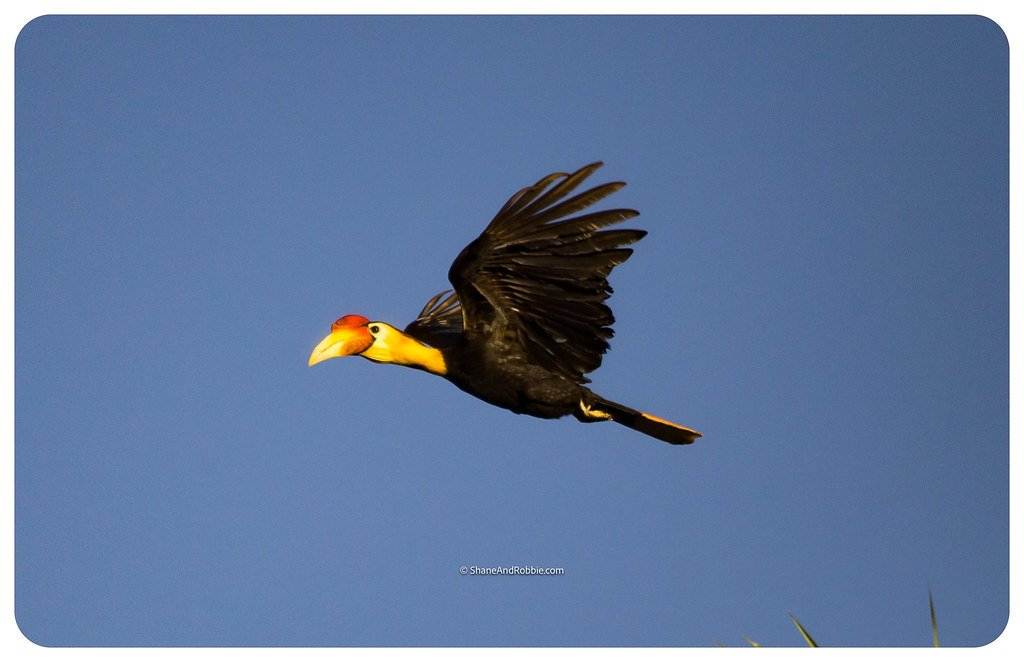 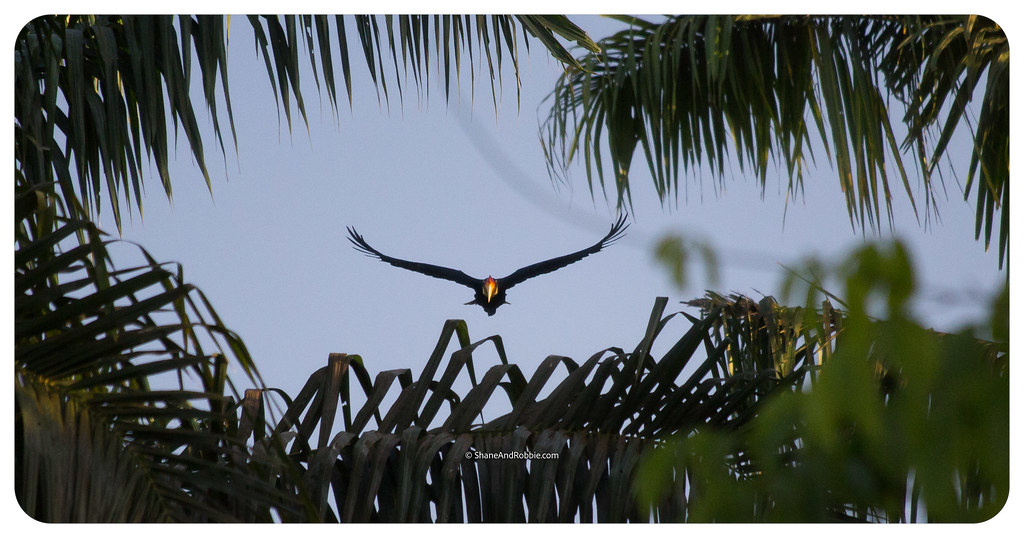 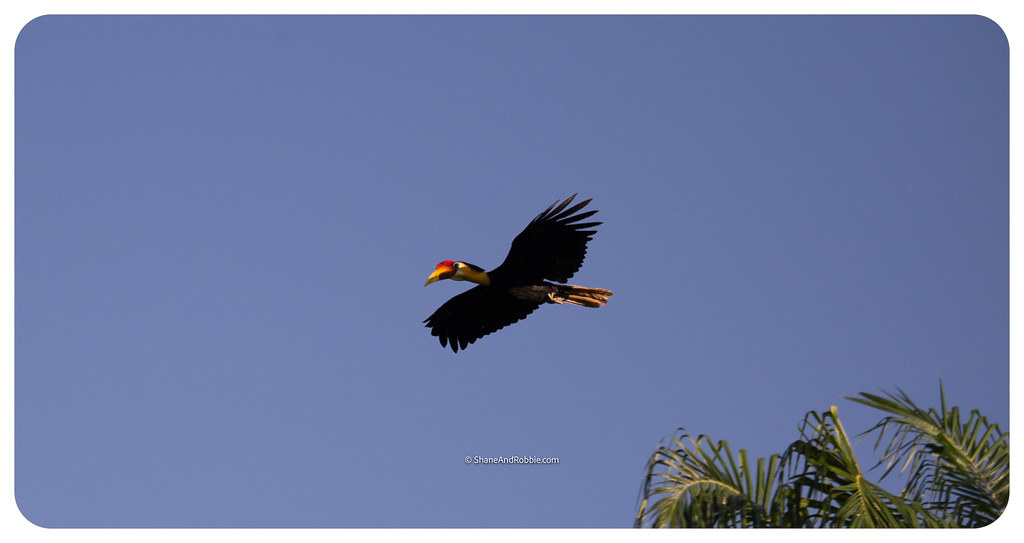 The other highlight of the afternoon where a troop of pig tailed macaques. These medium-sized monkeys are named after their short, curly tail – reminiscent of the tail of a pig. The unique thing about these omnivorous primates is that they are skilled swimmers as well as climbers, often wading across streams to reach food. 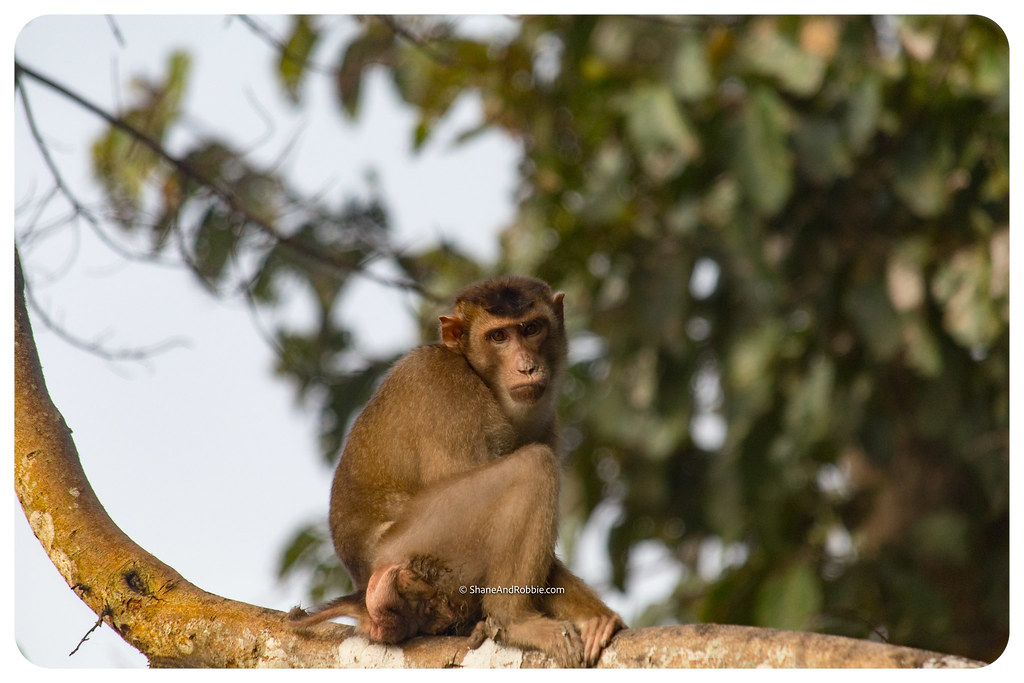 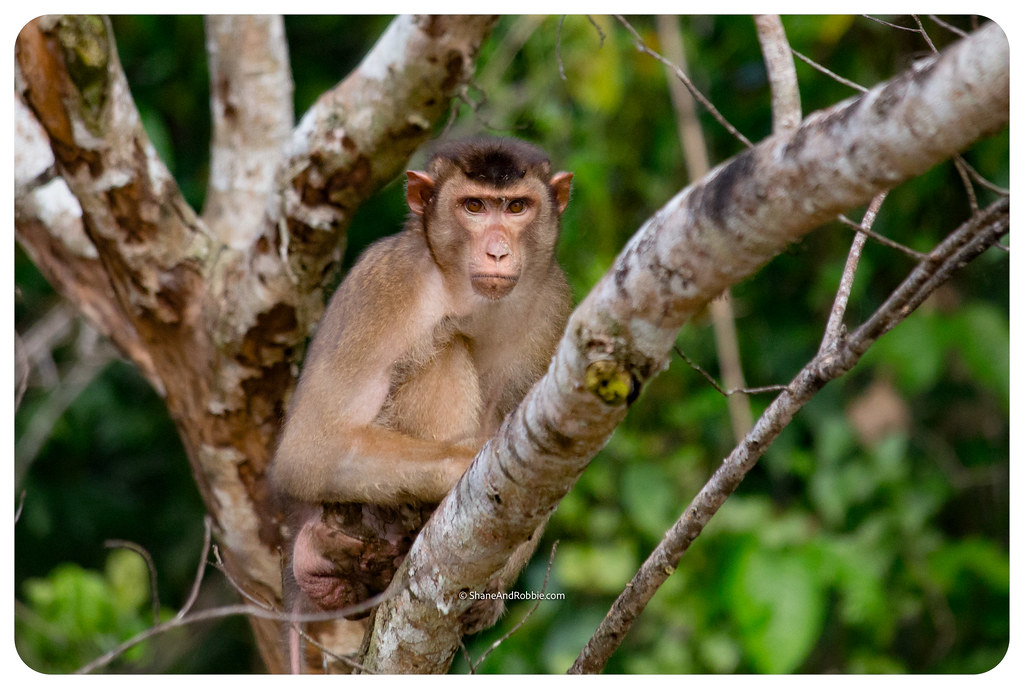 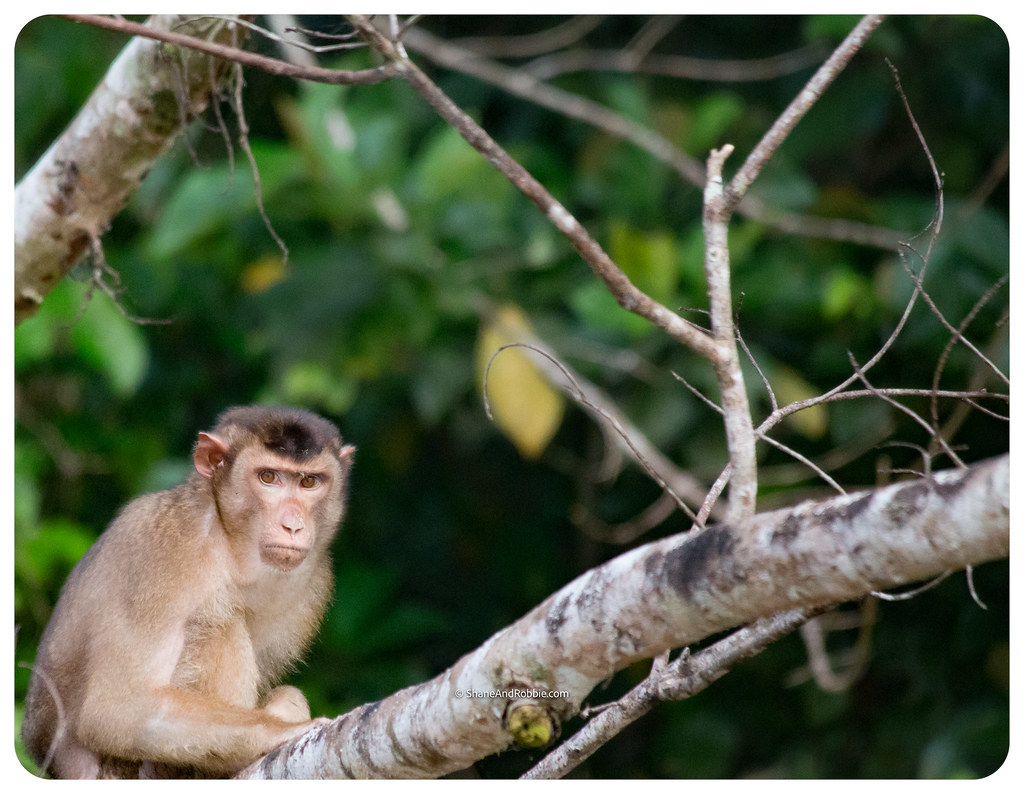 As the sun once again set on the Kinabatangan River we headed back to our lodge for another long, lazy dinner and another comfortable night’s sleep. We are absolutely loving this part of the trip and are so glad we chose to stay here for this along. Many people come here just for 1 night, or, even worse, just on a day trip from the nearest big town (Sandakan). For dedicate nature lovers, however, you really need at least 2 nights to give yourself the best possible chance of seeing as many animals as possible! 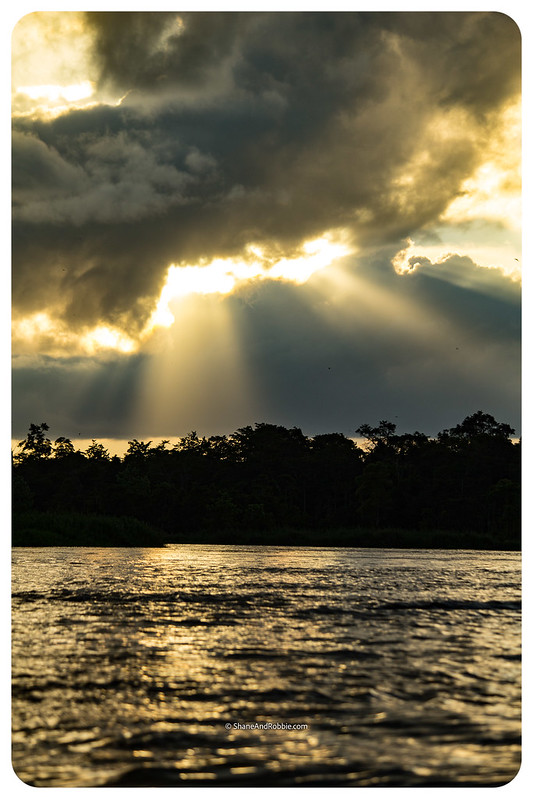