Throughout our travels we have generally found that the best a country has to offer is rarely found in its biggest cities – they’re usually busy, crowded, noisy and not as interesting for us as smaller towns and provincial areas. Yangon, however, may be an exception to this. The city’s colonial charm, friendly people, and plethora of Buddhist temples, made it a delightful place to explore for the day. 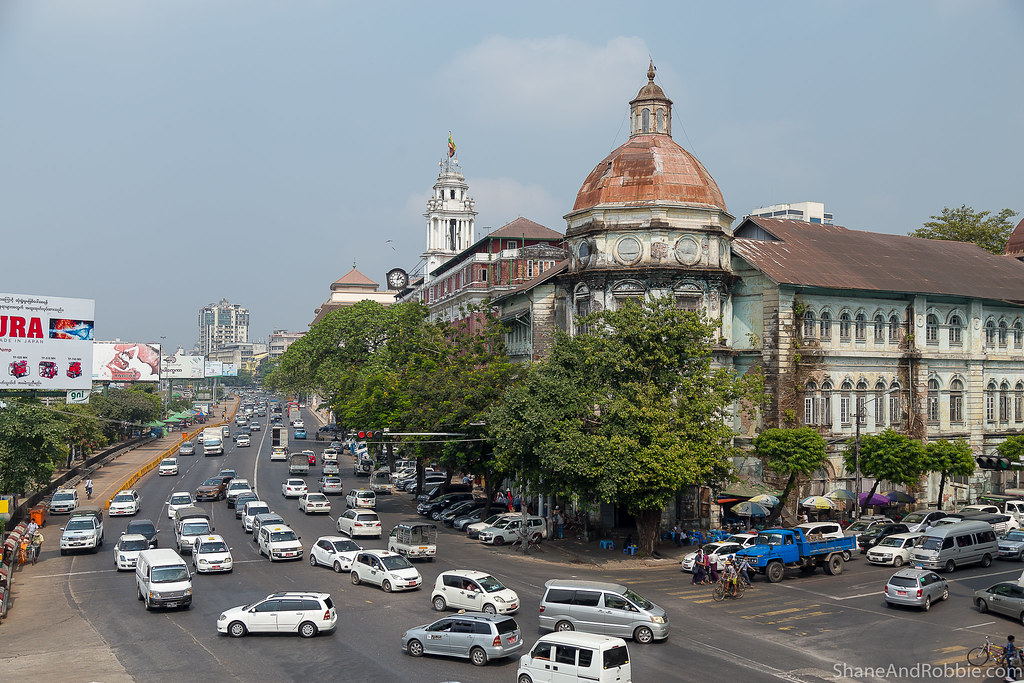 We woke to the sounds of car horns and the barking of street dogs (a grow[l]ing problem across Yangon we later learned). Not exactly the sweet sounds of serenity, but certainly a clear signal that we were somewhere wildly different from Brisbane, Australia! Excited to see more of Yangon we headed out early, after a quick hotel buffet breakfast, to explore the downtown area and see a bit more of this extraordinary city of 5 million inhabitants. 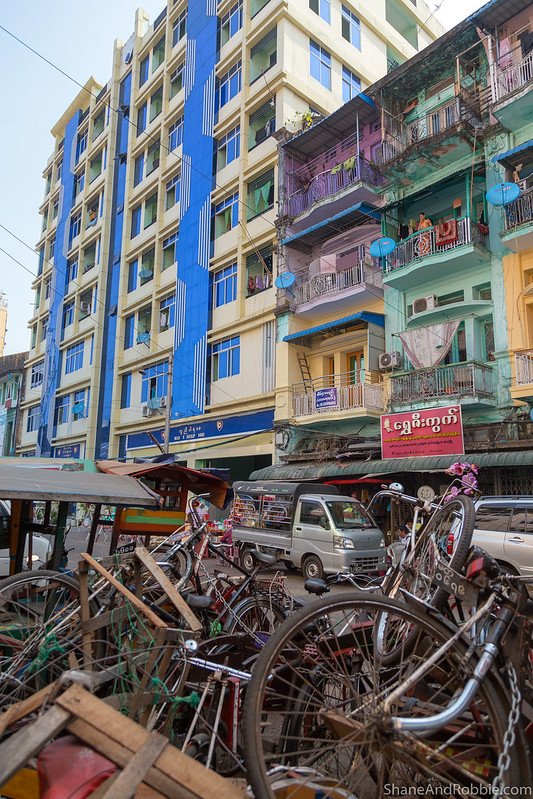 A short taxi ride and we were in central Yongon, strolling along Maha Bandula Street and Shwe Bon Thar Rd and marveling at the colourful but decrepit 19th century colonial buildings – a legacy of Myanmar’s time as a British colony. (It was the British, incidentally, that dubbed the country Burma, naming it after the largest tribal group in the rgeion – the Barmar people.) 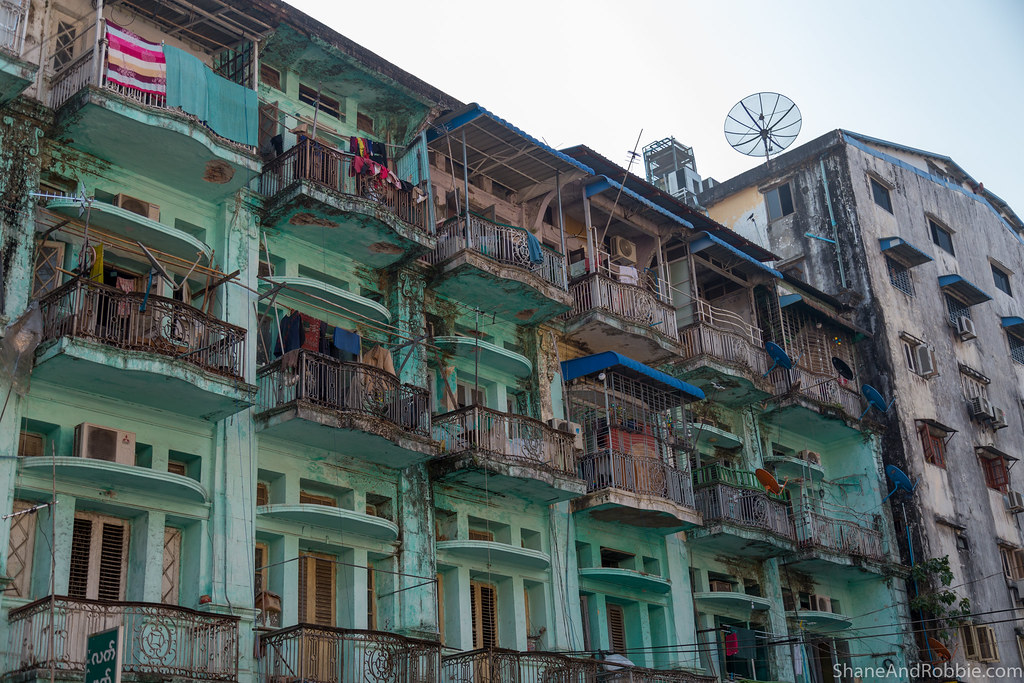 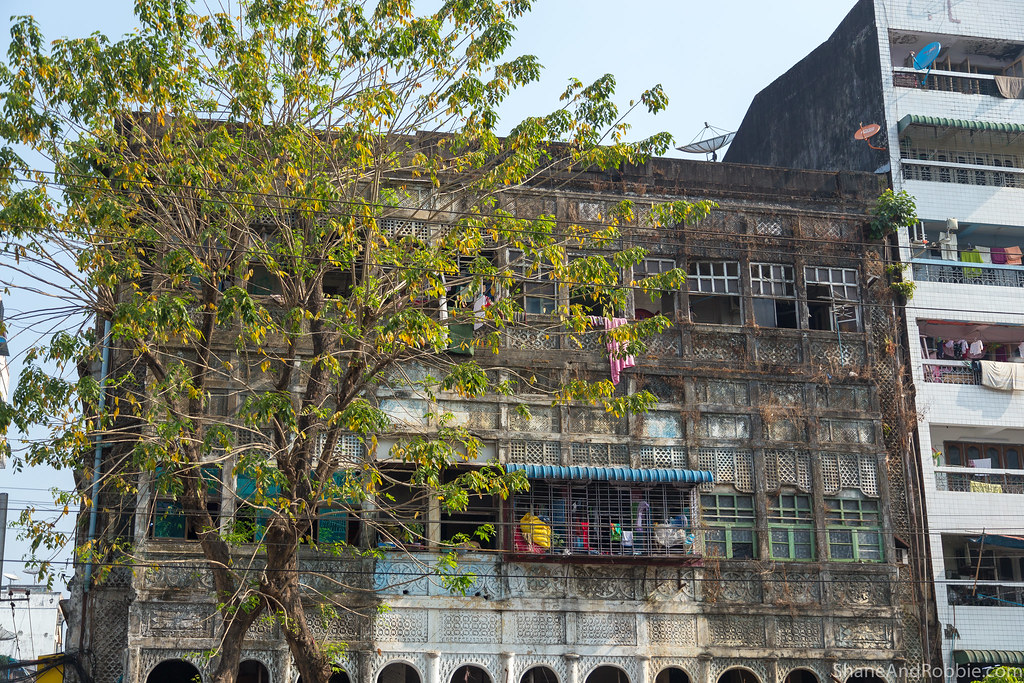 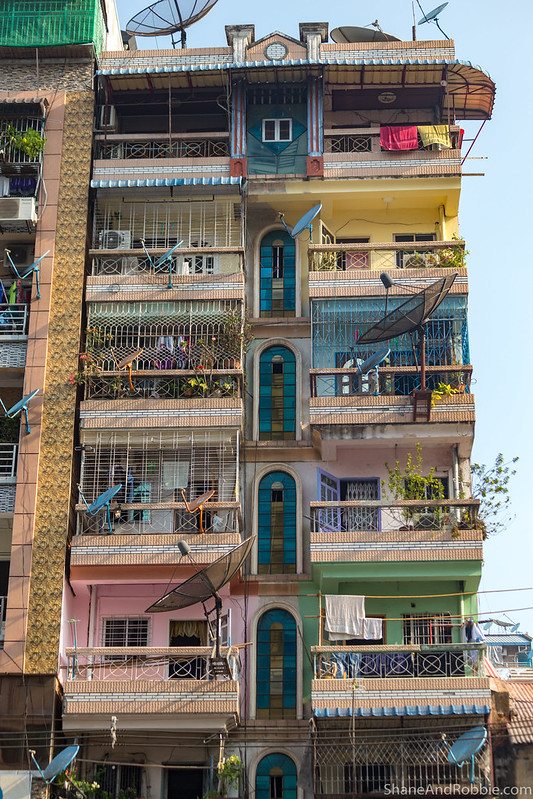 We saw people enjoying a customary breakfast of mohinga (i.e. fish and vegetable soup with rice noodles), or perched on tiny stool in tea houses savouring traditional Burmese black tea served with super-sweet condensed milk. Street vendors crowded every little spare corner, claiming patches of pavement as their own and hawking their wares to passer-bys. 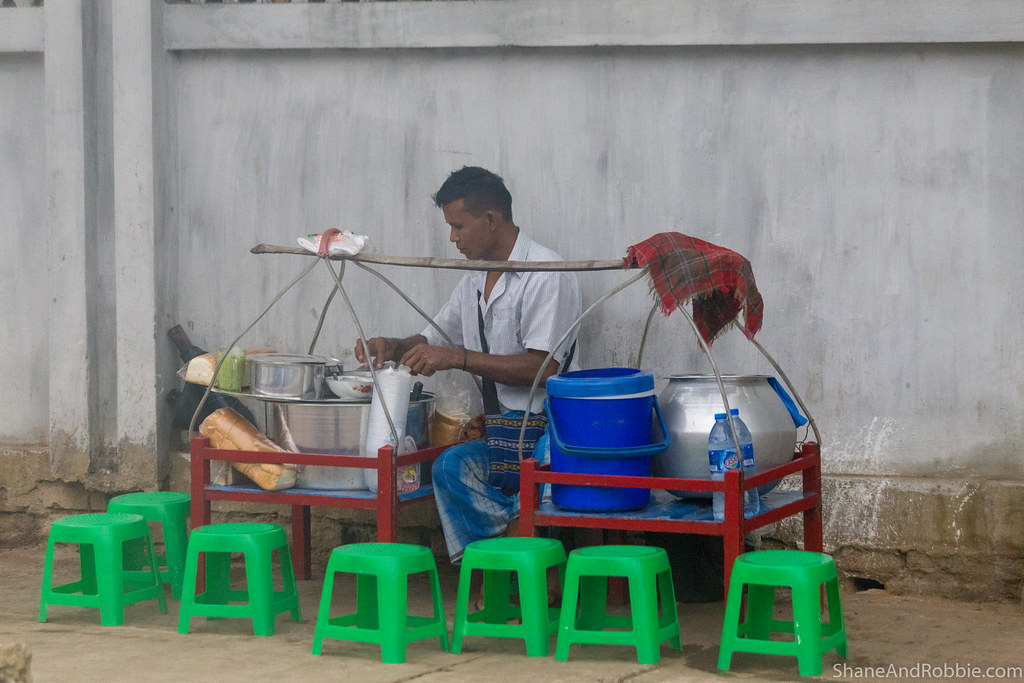 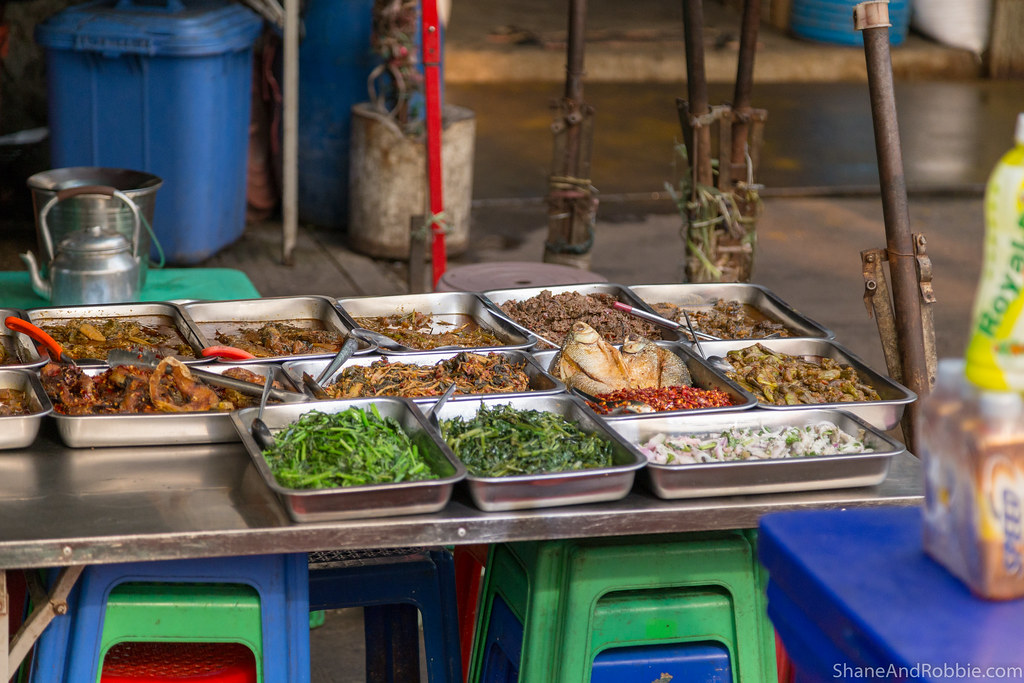 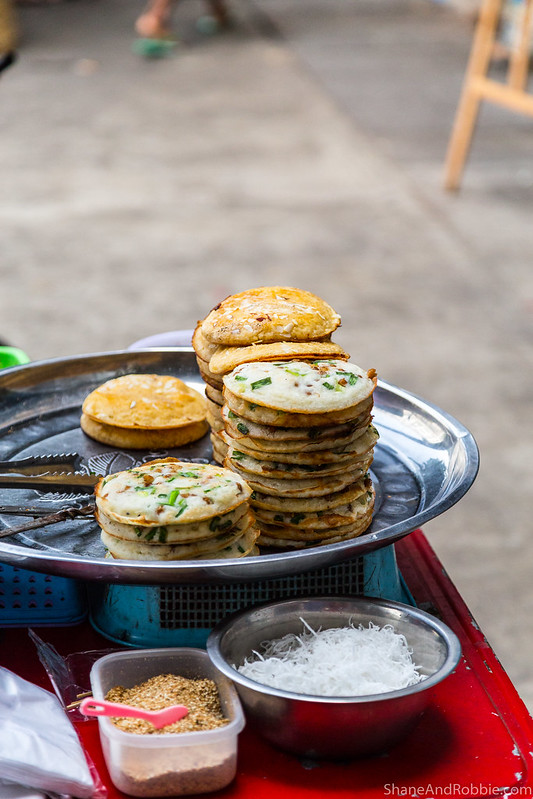 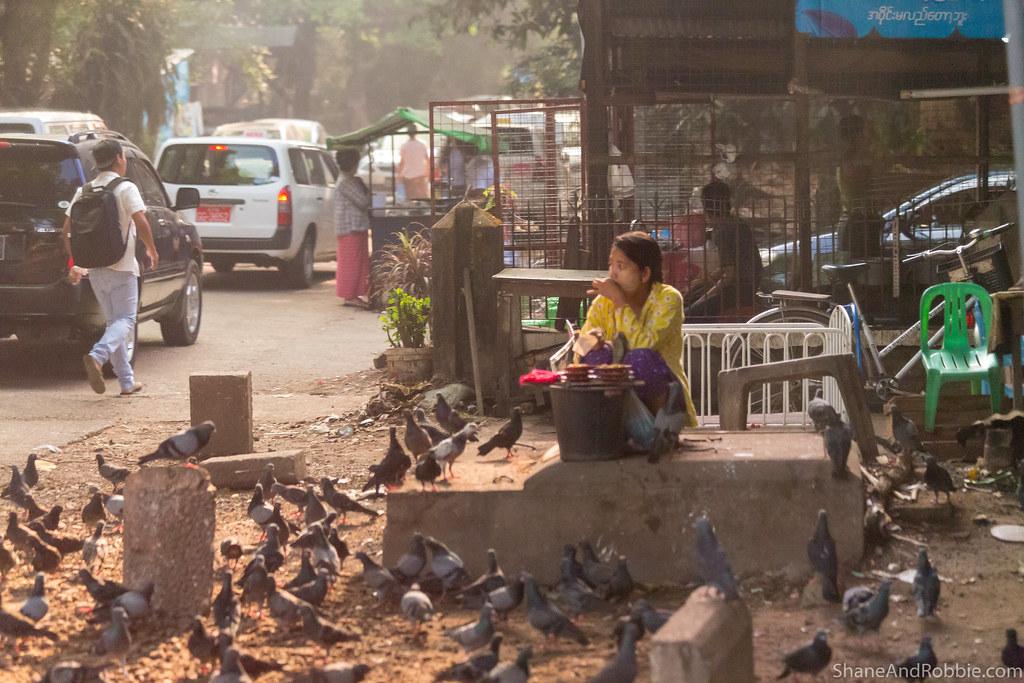 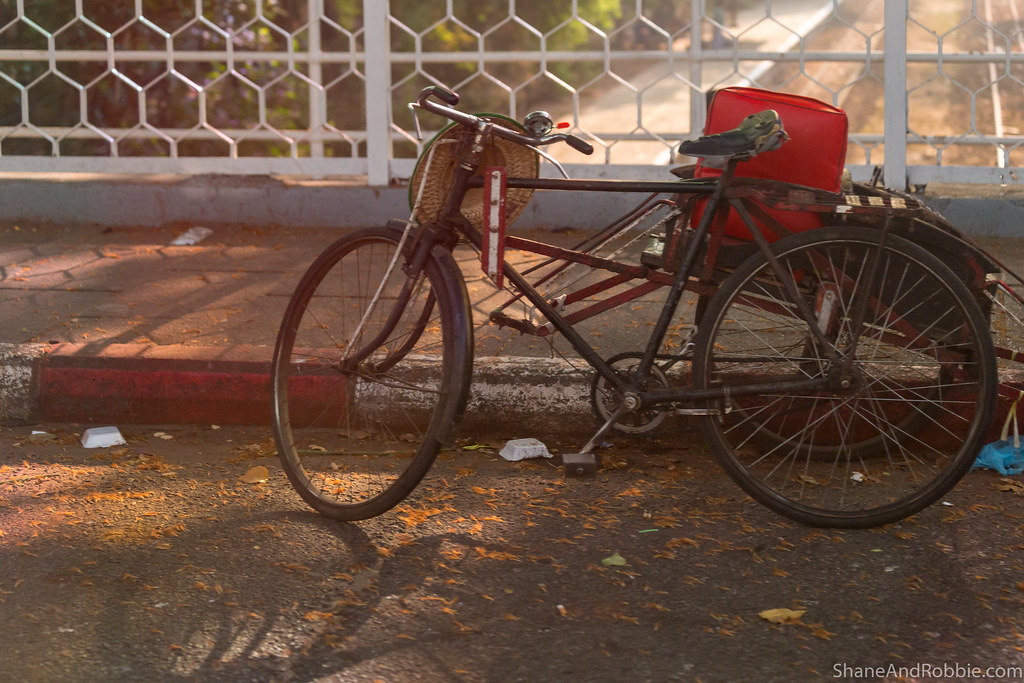 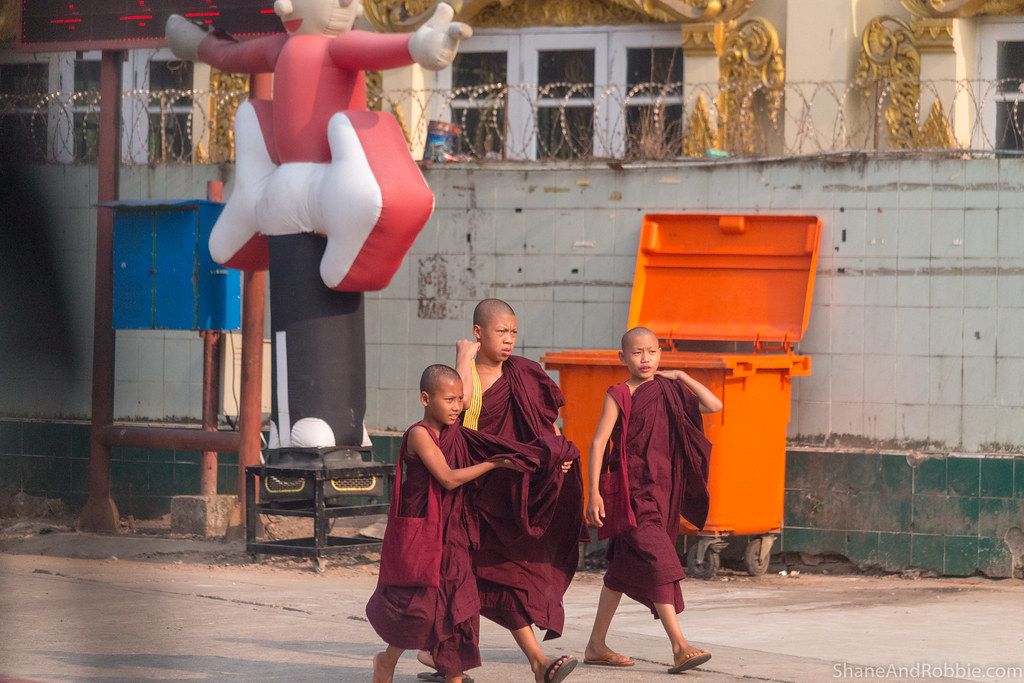 At the end of Shwe Bon Thar Rd we found Bogyoke Aung San Market, a major bazaar and tourist market selling Burmese handicrafts, jewelery, crafts, and sounveniers. Not far from this was Sule Pagoda, a Buddhist temple at the center of downtown Yangon. Older than the larger Shwedagon Pagoda we saw last night, Sule Pagoda was built on the site of an even more ancient nat* workship site.

*In traditional Burmese culture, nats are nature spirits that watch over the world of the living. Many Burmese people worship nats alongside Buddhism, combining these two belief systems to form a unique hybrid that venerates nature as well as following the edicts on Theravada Buddhism. 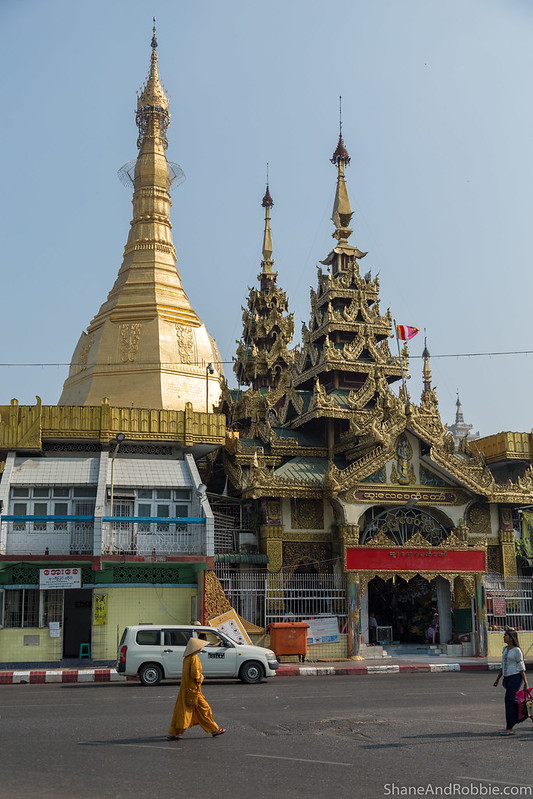 Nearby, was Yangon City Hall. Built in the 1930’s by a Burmese architect, this is one of the rare colonial buildings with built in a characteristically Burmese style. 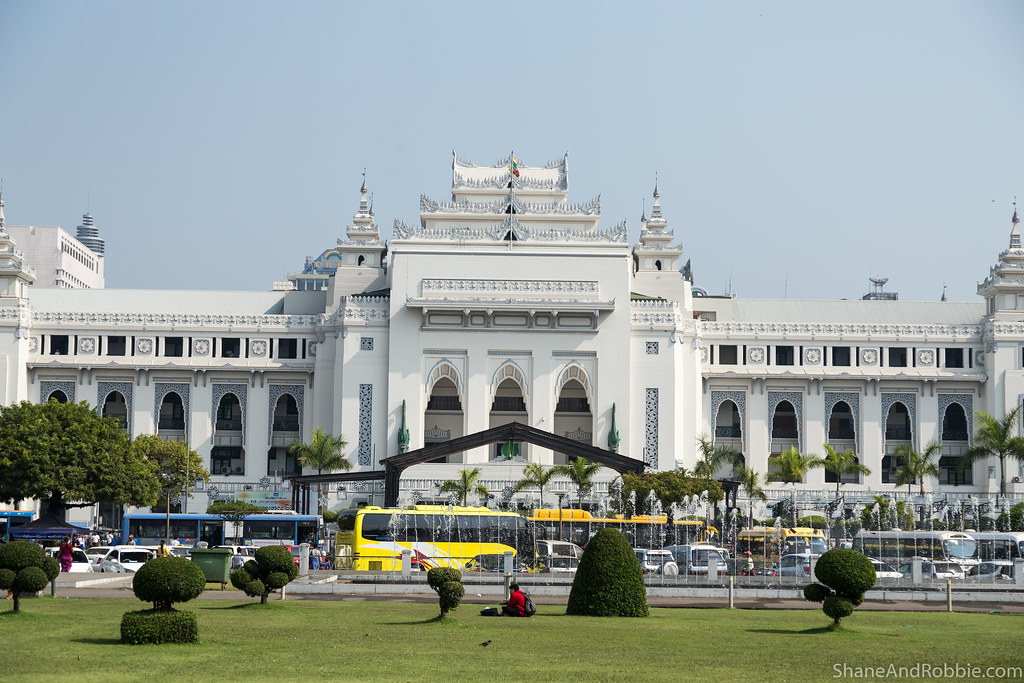 Across the road is the grassy Maha Bandula Garden Park, with its central Independence Monument and surrounding mix of colonial and modern buildings. 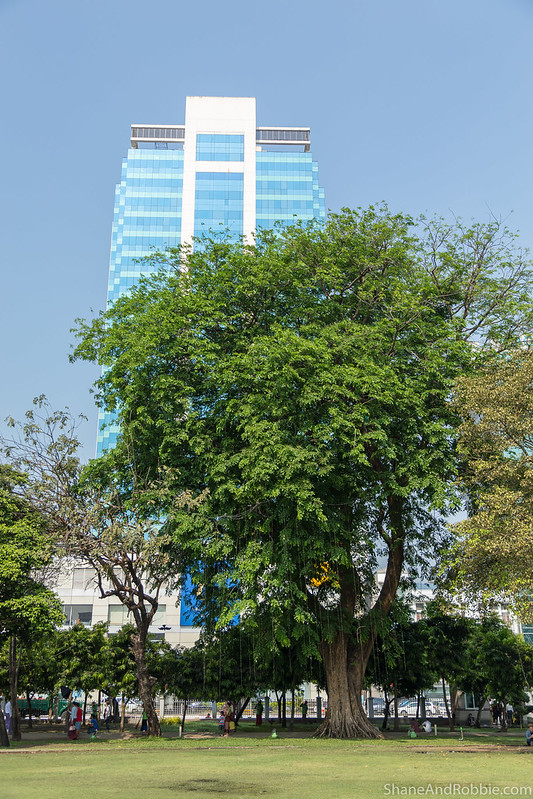 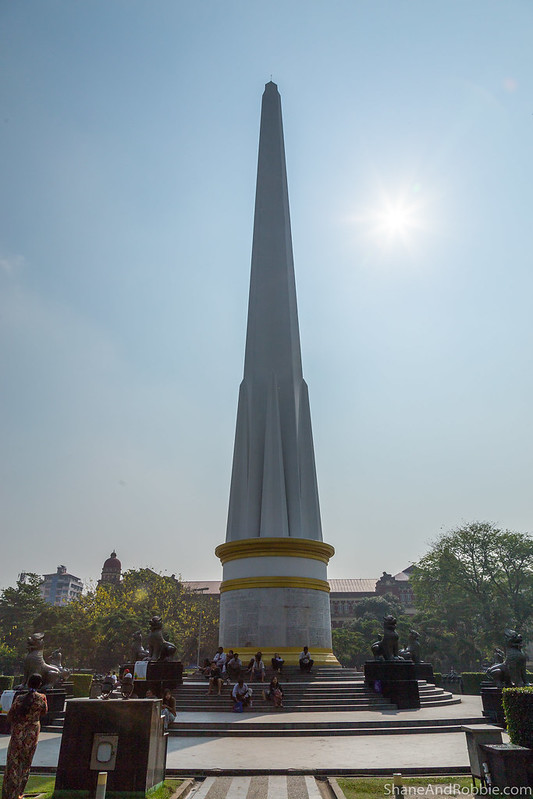 Further on were the Telegraph Office, the Rangoon High Court building, and the Port Authority building, all looking somewhat worse-for-wear, but charming none-the-less. 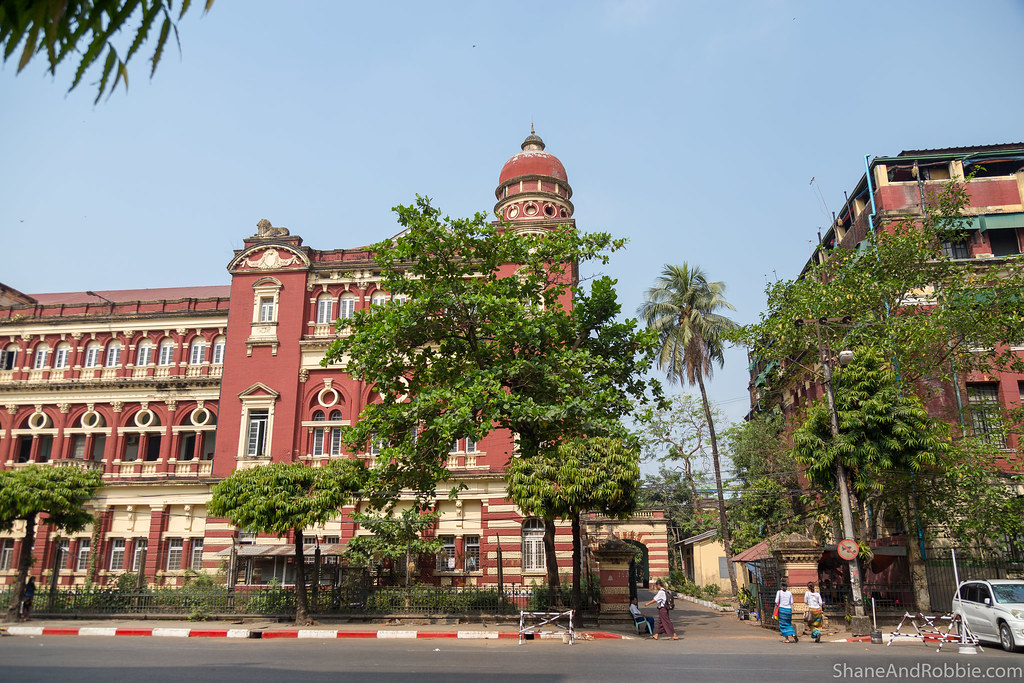 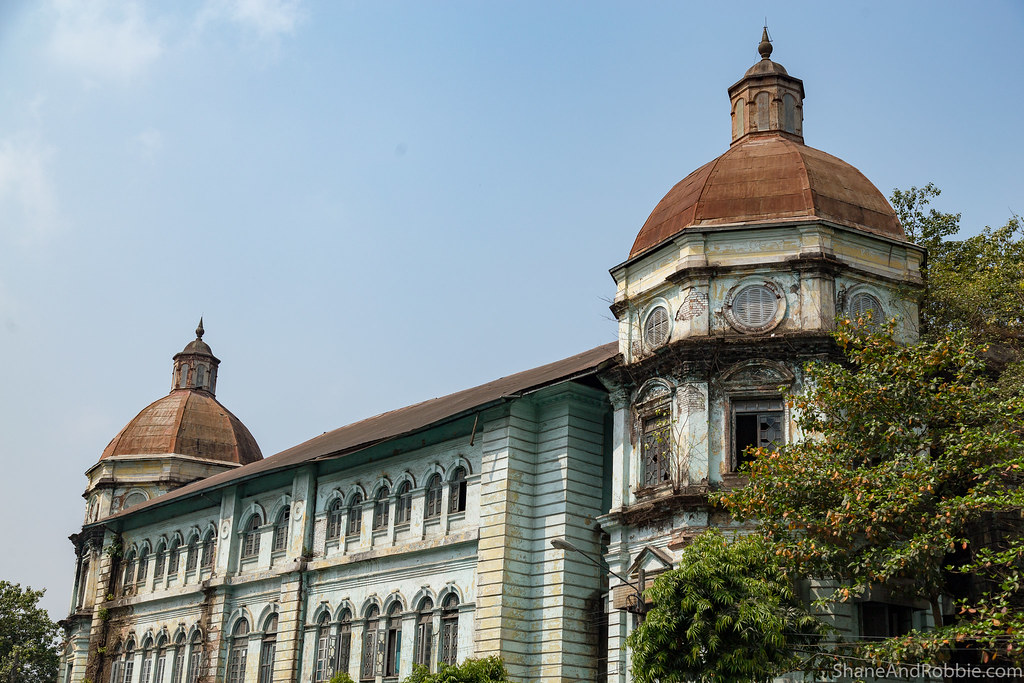 As the morning wore on, the city got busier and the temperature soared to 40oC. The overall effect was one of sensory overload, with heat, humidity, sights, smells, and sounds combining to leave us feeling a little overwhelmed. To escape we ducked into the Strand Hotel for a brief, air conditioned respite. The Strand is a Victorian-style hotel built in 1901 by the Sarkies Brothers (famous for their other Asian hotels: Raffles Hotel in Singapore and the Eastern & Oriental Hotel in Penang, Malaysia). During the colonial period, the Strand was one of the most luxurious hotels in the British Empire. It was damaged during the years of Japanese occupation of Myanmar/Burma, and fell into disrepair following World War II. Following a total renovation, it reopened in 1993 however as a top-of-the range boutique hotel. Well outside our budget, but a great place to stop for a coffee and rest. 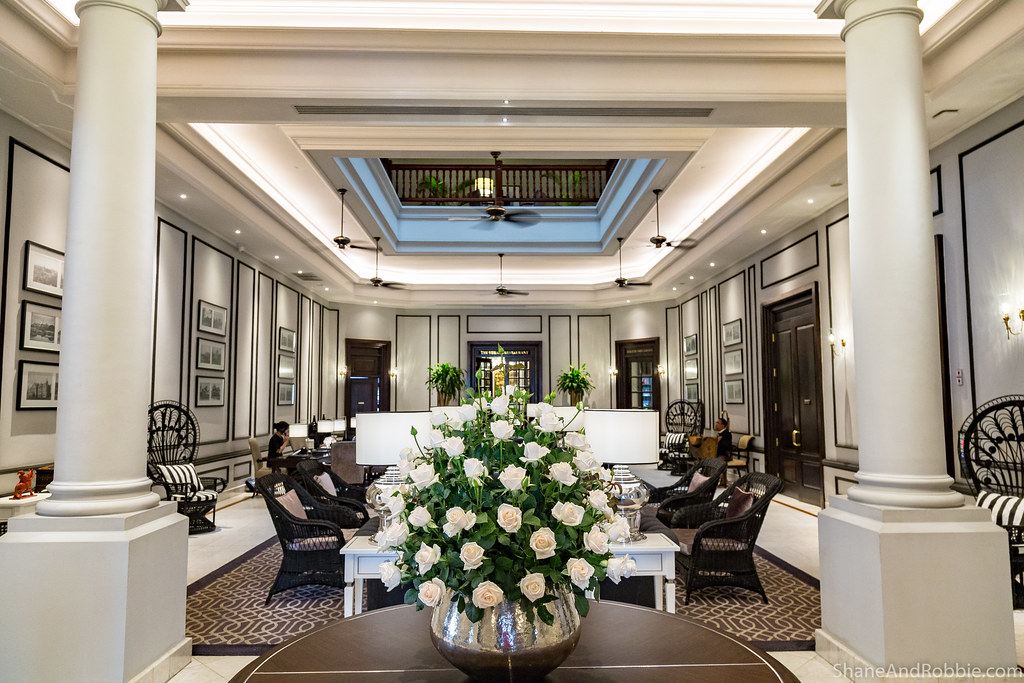 After a bit more sightseeing we stopped for lunch and then decided it was time to head back to the hotel for an afternoon sojourn. (We’ve learned that in exceptionally hot climates, the best approach to touristing for us is to head out early in the morning, stay out until lunch time, and then head back to our hotel for the hottest hours of the day. We can then re-emerge in the late afternoon as things once again cool down.) 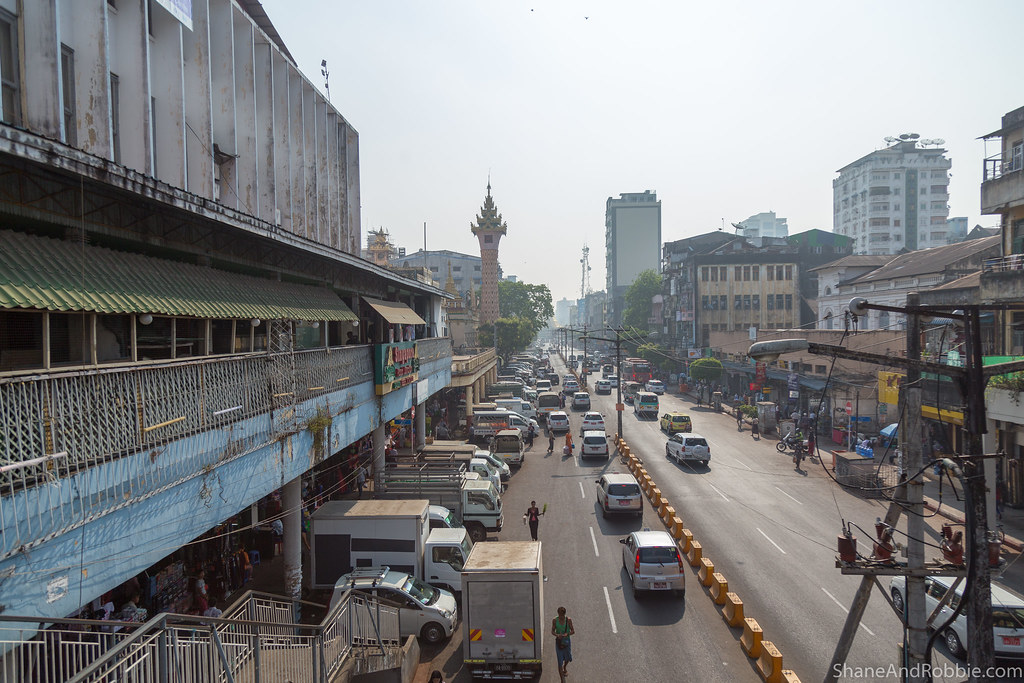 Once the afternoon began to cool, we headed back out for a stroll through Kandawgyi Garden. This 110 acre garden has, at its centre, a large man-made lake created in the 19th century to provide a clean water supply to the city by the British colonial administration. Built on the lake is a rather tacky golden creation known as the Karaweik; this concrete replica of a Burmese royal barge was built in 1972 and houses a large buffet restaurant today. 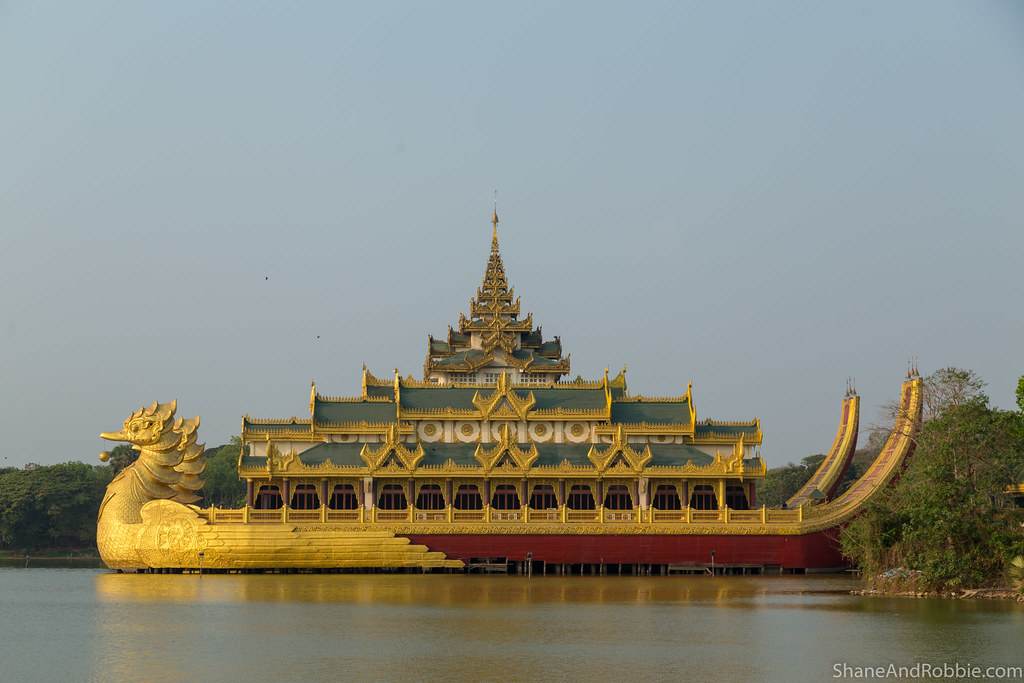 Like People’s Park, Kandawgyi Garden provides the resident of Yangon with green space to relax in. It made a lovely place to stroll before we headed off to dinner at House of Memories. This traditional Burmese restaurant is set in a colonial home that was once used as the offices for Myanmar’s independence fighters. The restaurant still has a room set aside to display artefacts that once belonged to Myanmar’s much-loved champion of independence: General Aung San* (father of the Noble laureate and current Burmese State Counsellor, Aung San Suu Kyi*).

*We have already noted how much the people of Myanmar revere and respect both General Aung San (whom they refer to as Father of the Nation), and his youngest daughter, Aung San Suu Kyi (whom they refer to as simply The Lady). Aung San Suu Kyi was awarded the Nobel Peace Prize in 1991 for her non-violent struggle for democracy and human rights. Many credit this remarkable lady with the end of the oppressive dictatorship and military rule that kept Myanmar isolated from the rest of the world for decades following its independence in 1948. 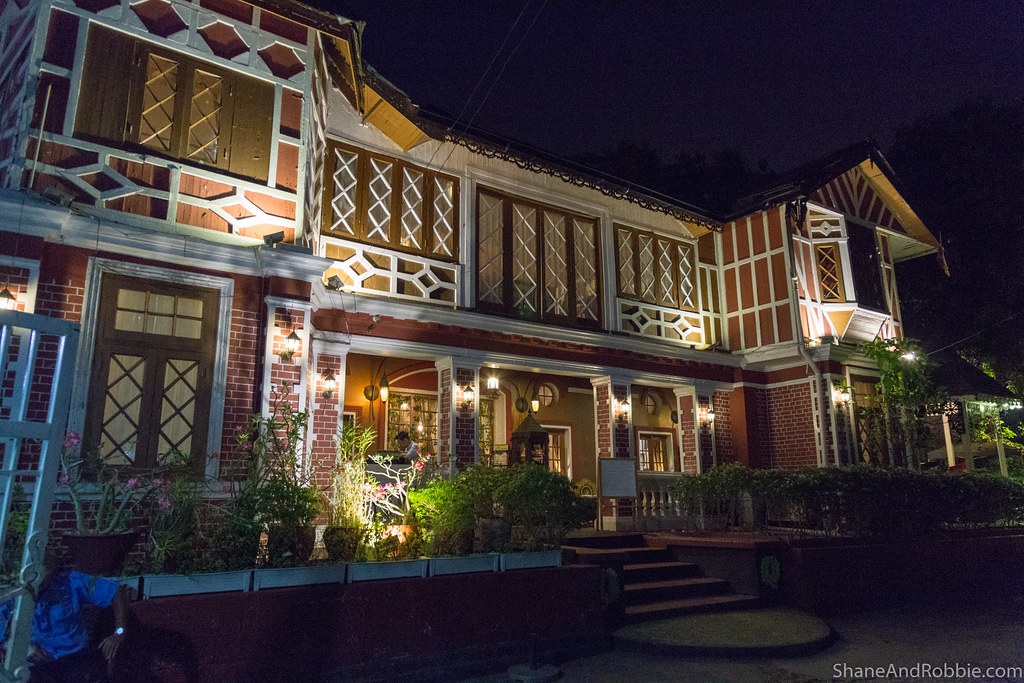 And thus ended our second day in Myanmar! We had a great day strolling around Yangon. It seems a very safe city, and one we were very quickly comfortable in. Obviously first impressions aren’t everything, but so far we’re loving it! There’s no doubt this is a nation still in development, with a long way to go; but if the friendliness, openness, and genuine smiles of the locals we spoke to today are anything to go by, things in Myanmar are good and getting better. 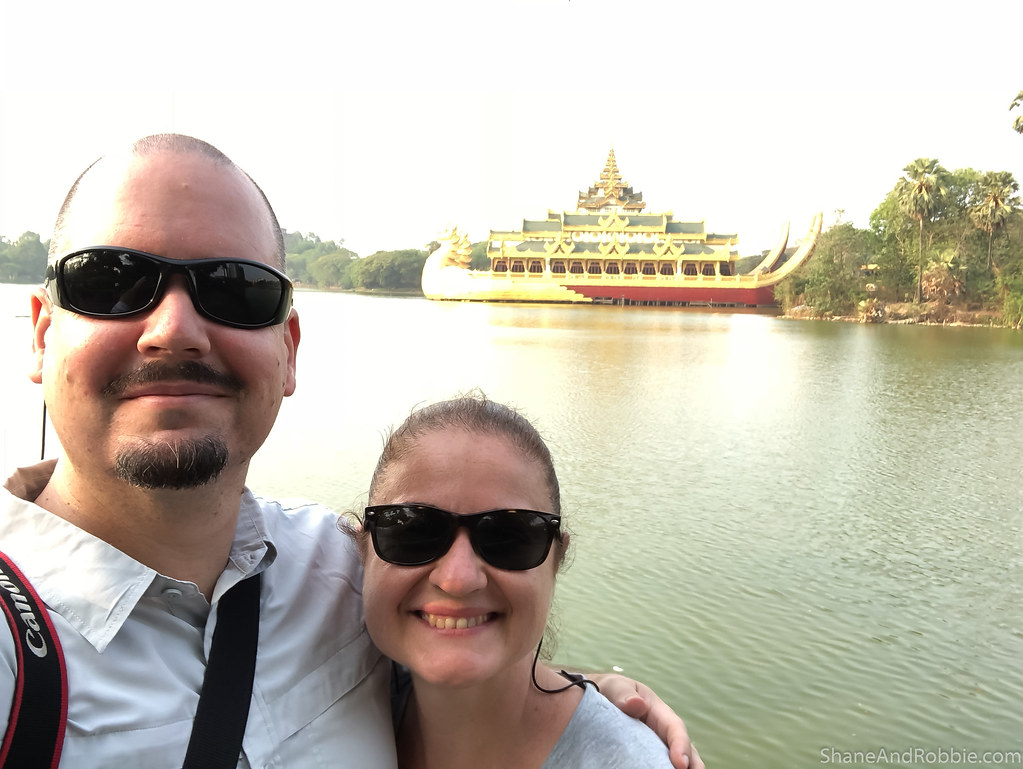