ON THE ROAD TO MANDALAY
Thanks to Rudyard Kipling’s famed poem, for many people the name “Mandalay” evokes images of an exotic Eastern city; a paradise far away. Mandalay was also the last royal capital of Myanmar before the country was annexed by the British, adding to its romantic, mystical aura. We left Yangon today and went to explore this exotic destination for ourselves. Turns out in modern times, the city of Mandalay is a bustling, dusty, and fairly nondescript city! Ah well, so much for 19th century romanticism…

If you’ve heard the East calling you won’t heed naught else
No, you won’t heed nothing else
But the spicy garlic smells
And the sunshine, the palm trees and the tinkly temple bells
-excerpt from “Mandalay”, Rudyard Kipling (1892) 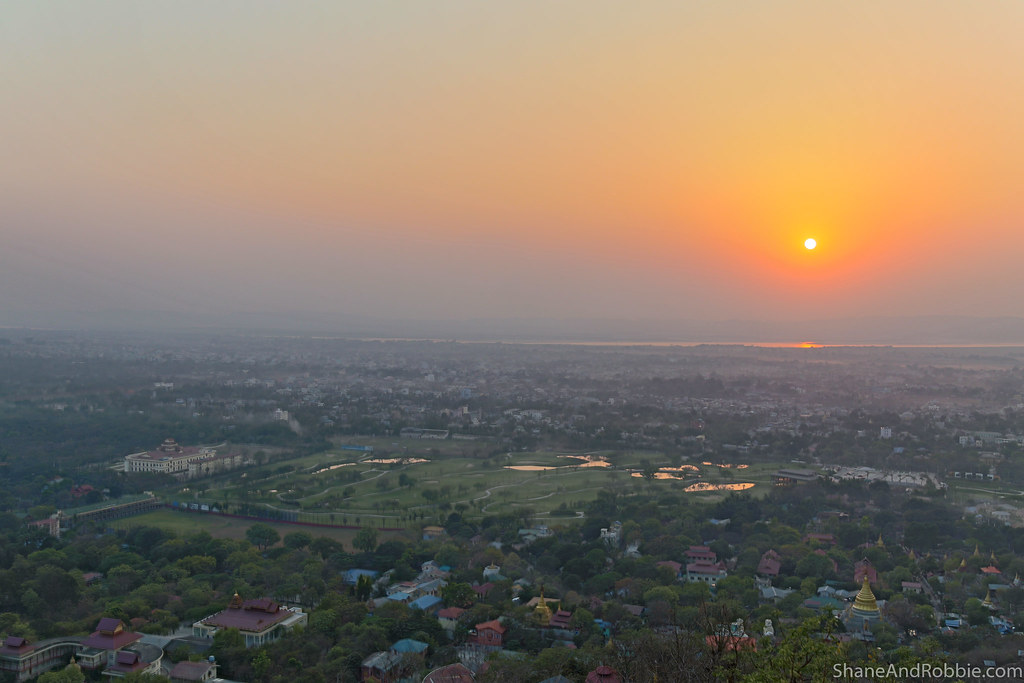 Mandalay is the second-largest city in modern Myanmar and is considered the center of Burmese culture. Located 716 km North of Yangon and situated on the East bank of the Irrawaddy River, the city has a population of about 2 million and actually seems far more chaotic than Yangon. Perhaps it’s the masses of motorbikes and bicycles that clog the streets (these have been banned in Yangon, greatly changing the composition of traffic there); or maybe it’s due to the extra hot climate up here. Whatever the reason, Mandalay isn’t quite what we expected. It’s still proven to be well worth exploring though! 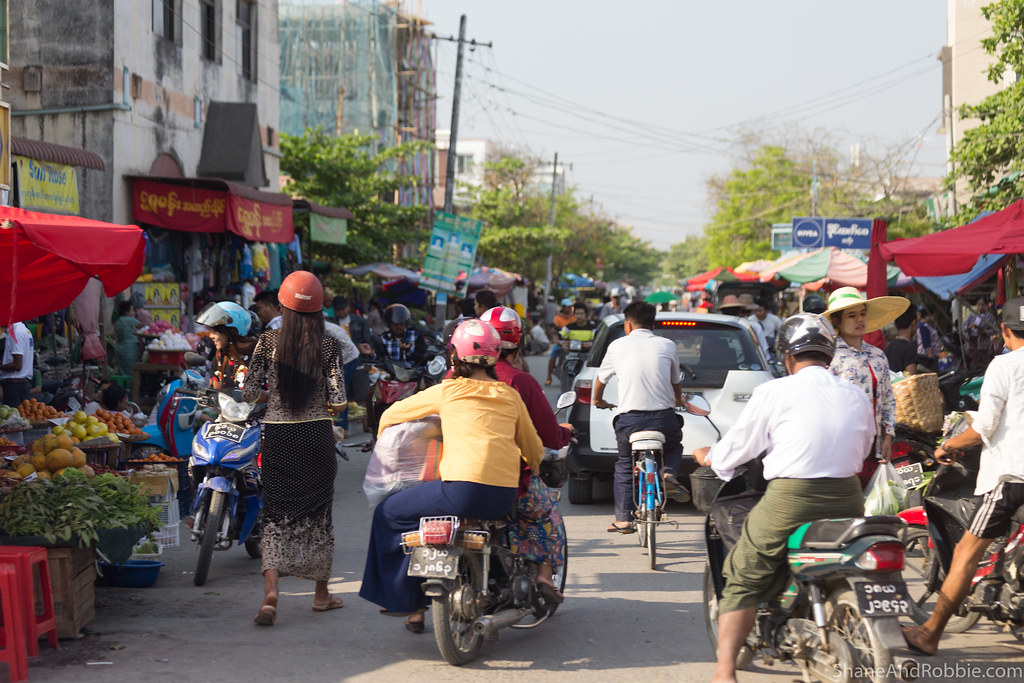 We chose to fly here from Yangon and arrived around midday. We generally don’t like to travel between cities by air as you don’t really see anything when you fly – we prefer to travel by road and see the countryside and experience a bit more of the “real” side of a country. Given the limited time we have, however, and the large distances in Myanmar, we’ve chosen to forgo the long and unreliable train journeys or the joys of overnight bus trips, and fly between major centers instead. Given flights are only about $60AUD per person one-way, it’s actually proven to be a very cost effective way to travel too. 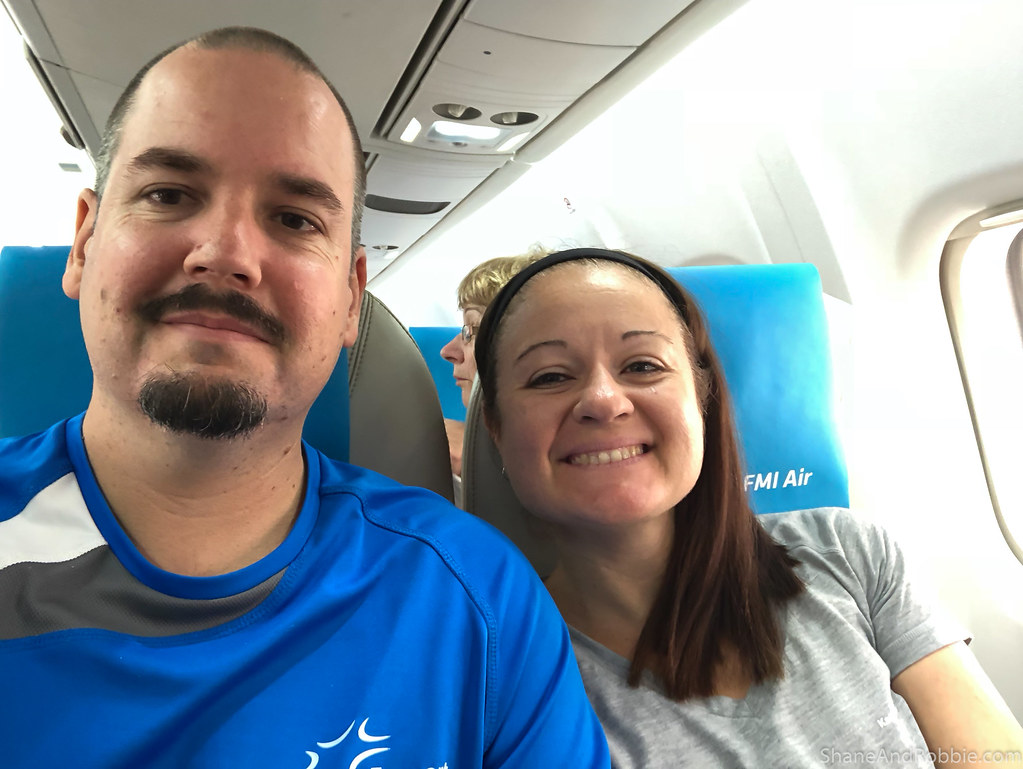 After dropping our bags off at the hotel we set off to find some lunch and ended up at a restaurant that served traditional Burmese food. As you would imagine, Myanmar food is highly influenced by the cuisines of neighboring countries, with common offerings being Thai-like salads, Indianesque curries, and Chinese-like stir fries. Invariably the main dish is served with steamed rice and an array of small vegetable side dishes. All curries, stir fries, and soups always seem to contain a generous dose of garlic, onion, and ngapi (i.e. a paste made from fermented shrimp or fish that lends dishes a characteristic salty, tart flavour – it certainly doesn’t smell like it’s edible but the flavour it adds to dishes is amazing!). Main dishes also tend to be a bit oily, with peanut and rapeseed oils the most common oils used in cooking; but overall the end result is delicious. Due, perhaps, to the fact that the ingredients here are all so fresh – the flavours in the vegetables are incredible and even something as simple as a vegetable soup can be a flavour sensation. Some people warned us that Burmese food was not that great, but we’ve found it to be exceptional. The other great culinary discovery we’ve made here is Myanmar beer. Given the water’s not safe to drink, it’s good to have found a beverage that keeps us hydrated! 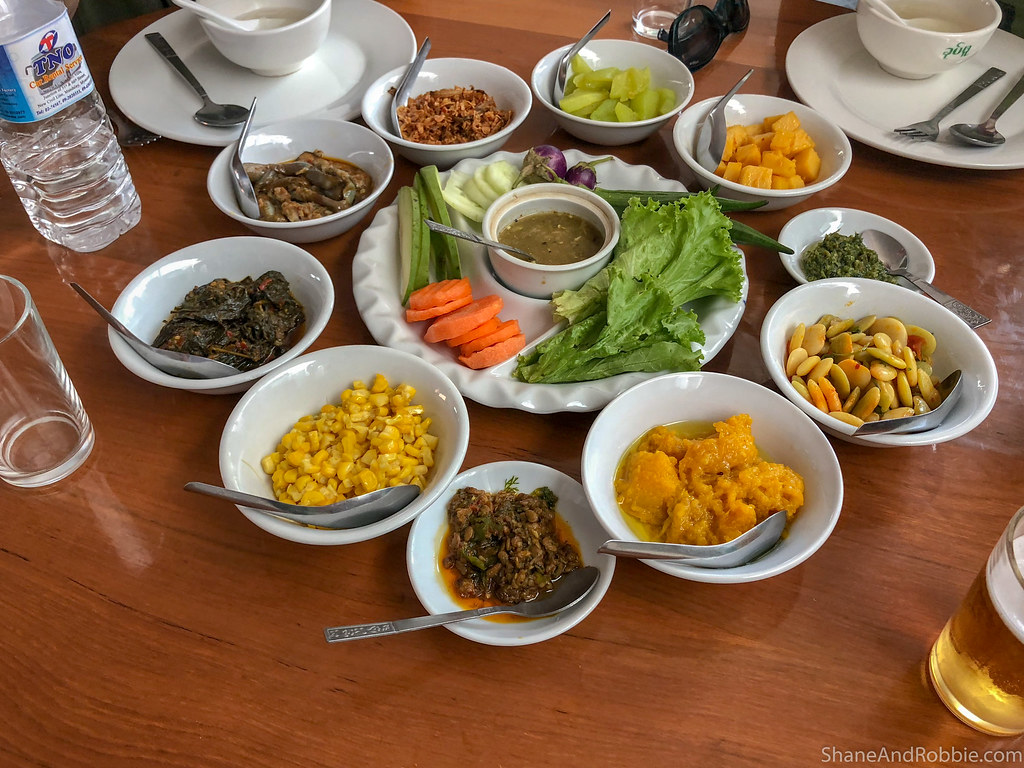 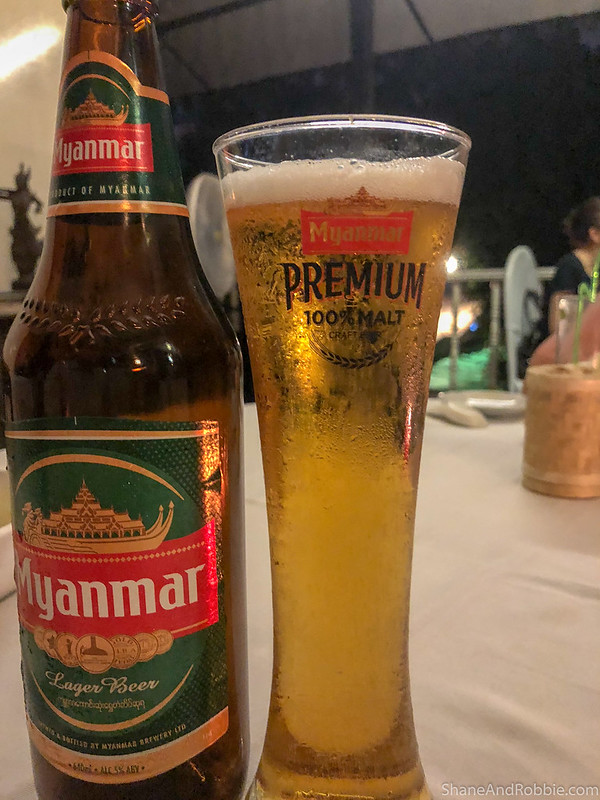 Bellies full, we then set off for an afternoon of sightseeing, with the Mahamuni Temple our first stop. This Buddhist temple is considered the most sacred religious site in Mandalay due to the golden Buddha statue housed within. According to Buddhist lore only five true likenesses of the Buddha were made during his lifetime; 2 are in India, 2 are lost, and the last one is the statue housed within the Mahamuni Pagoda. The statue was originally from the Rakine State to the West of Myanmar, but was taken by the Burmese king when he conquered the area in the 18th century. The statue was originally made of bronze, but over the centuries, pilgrims have pasted golden leaves onto the body* of the statue as a sign of homage, rendering the image almost unrecognisable.
*Due to the statue’s close representation to Buddha’s actual face, gold leaf cannot be attached to the face. 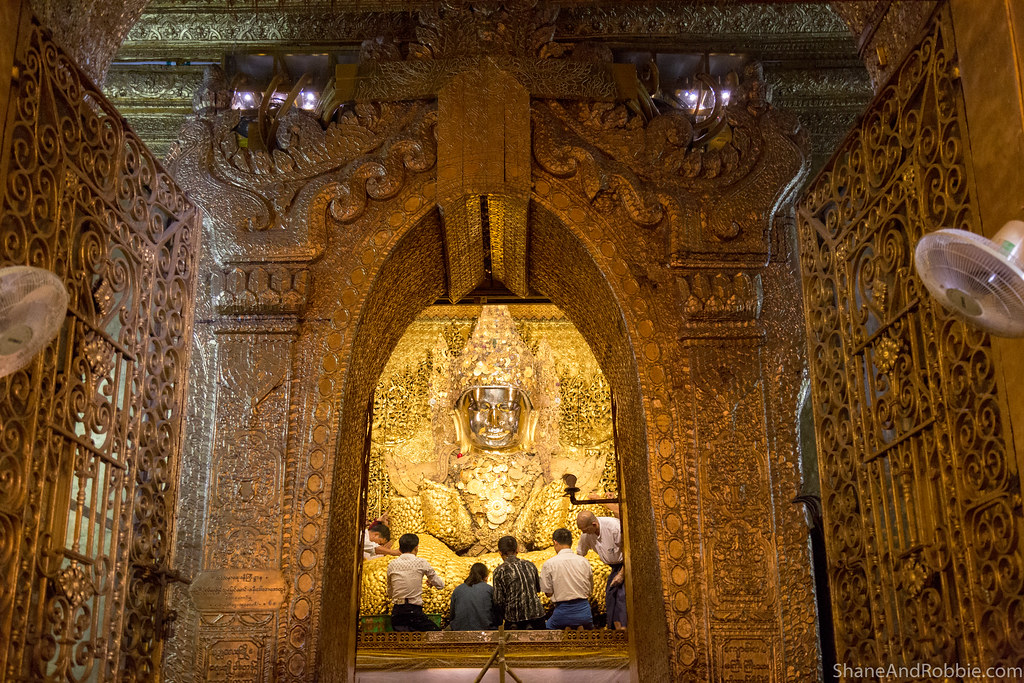 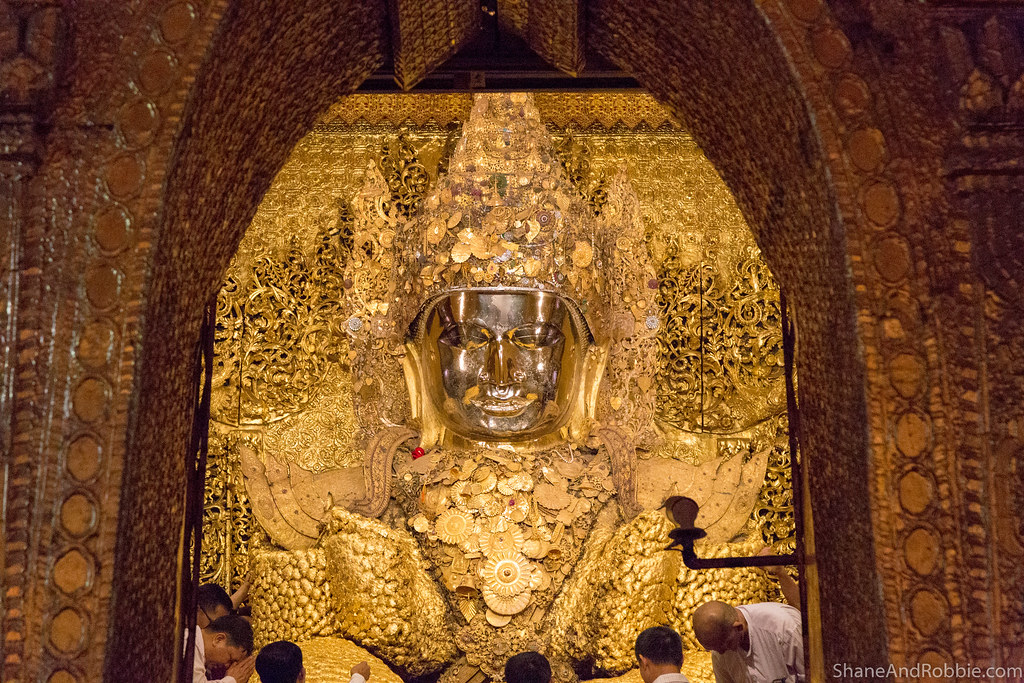 The highlight of the visit to the Mahamuni Pagoda for us, however, was when stumbled across a shinbyu ceremony underway at the temple. This is a traditional Burmese novitiation ceremony that marks the entry of young boys into Buddhist monasteries – something all boys do in the tradition of Theravada Buddhism. 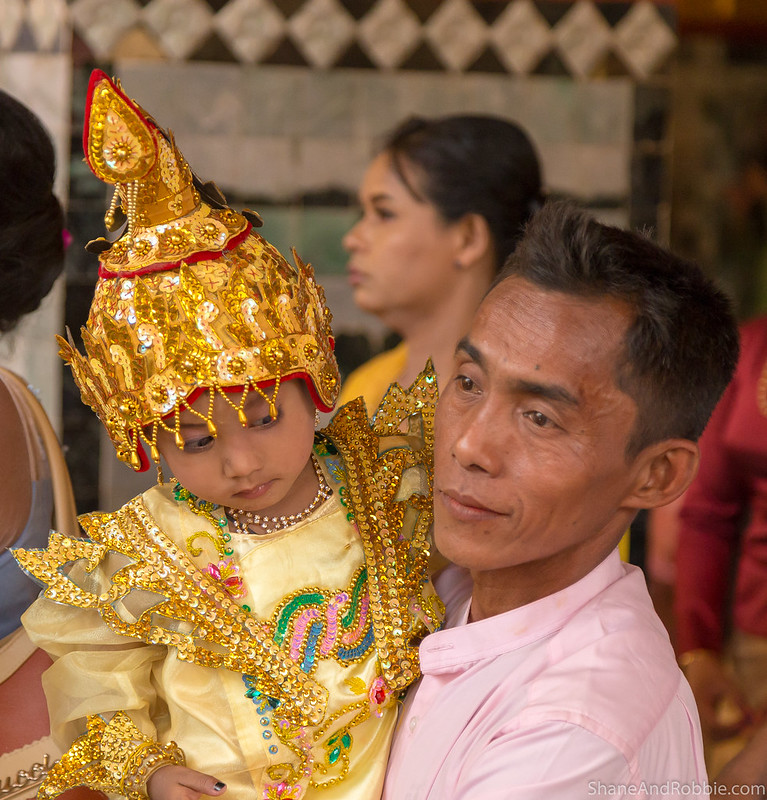 The boys were extravagently dressed in colourful, ornate costumers, and their parents, siblings, and families all looked so proud. It was spectacular! 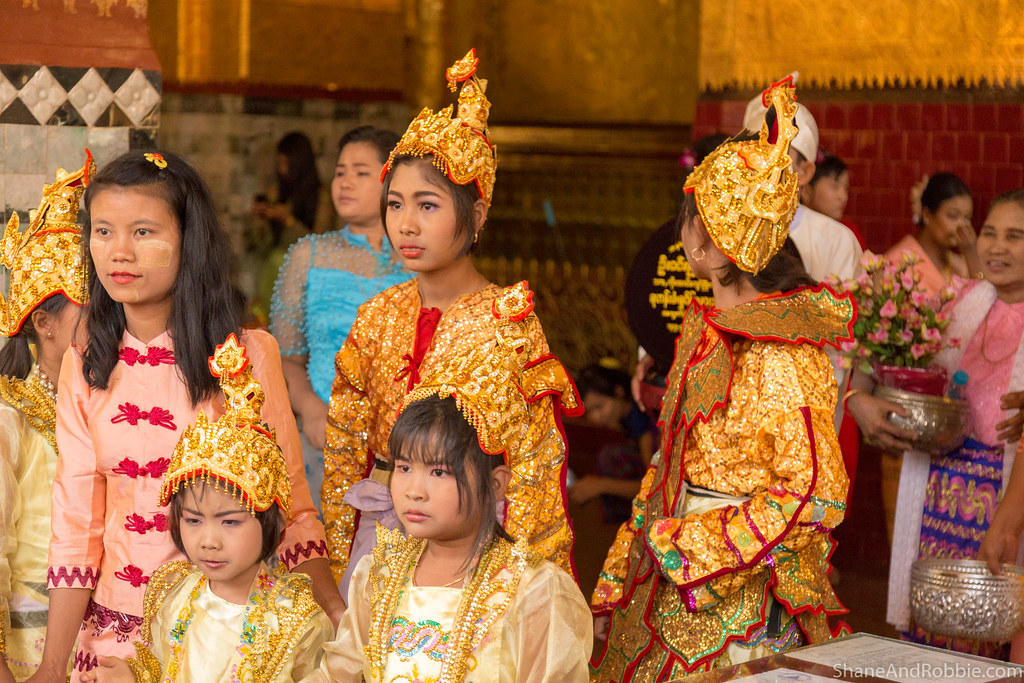 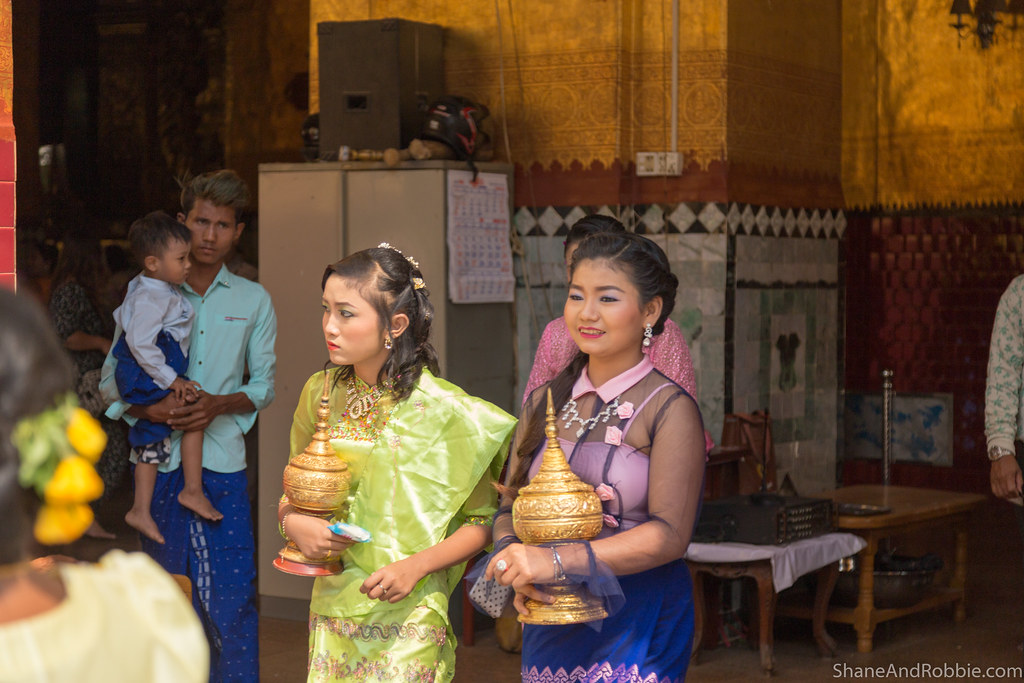 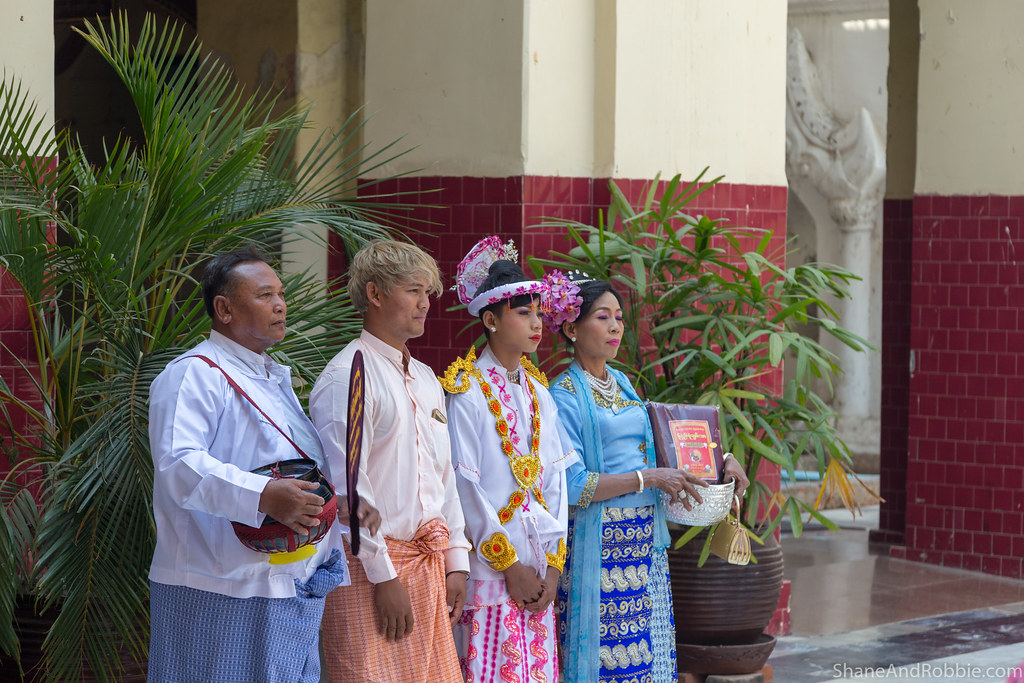 Traditionally, all boys in Myanmar will be ordained as novice Buddhist monks for at least a few days to become immersed in the teachings of the Buddha at least for a short while. (Some boys then go on to become monks and dedicate their lives to religious studies, but at the very least all young boys in Myanmar spend a week living in a monastery.) Most novitiation ceremonies are held at this time of year, following the harvest season but before the Water Festival that marks the beginning of the wet season. The ceremonies are as extravagant as families can afford, with host families hiring entertainers and providing a feast for guests. In some ways it reminded us of other coming-of-age ceremonies seen in other cultures/religions (e.g. the Catholic ceremony of First Holy Communion). 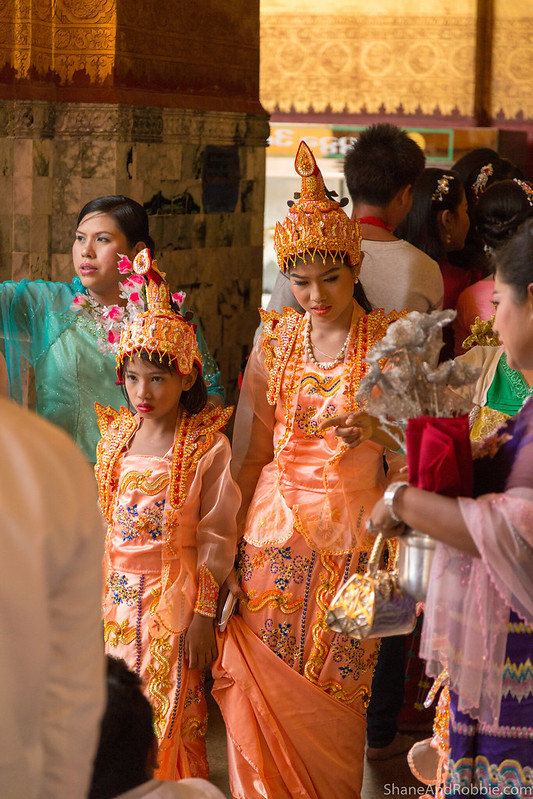 Myanmar is a devoutly religious nation, with strong adherence to conservative Buddhist precepts. Accordingly, monks and nuns are highly respected in Burmese society and having a child enter a monastery or nunnery (temporarily or permanently) is viewed as highly favorably for a family. Our guide* even told us that those who are not blessed with a male child may even sponsor the novitiation ceremony of boys from orphanages or a poor family in order to gain spiritual merit. The religiosity of this society and the high respect afforded to religious persons means there are more monks and nuns here than we’ve seen anywhere else in Asia.
*We often engage local guides in countries where we feel language and/or cultural barriers may stop us from getting the most from our travel experience. In this case we are SO glad we did as very few people speak English in Myanmar and given their native script is so different, we are virtually illiterate here! Having a local guide has really helped us understand. 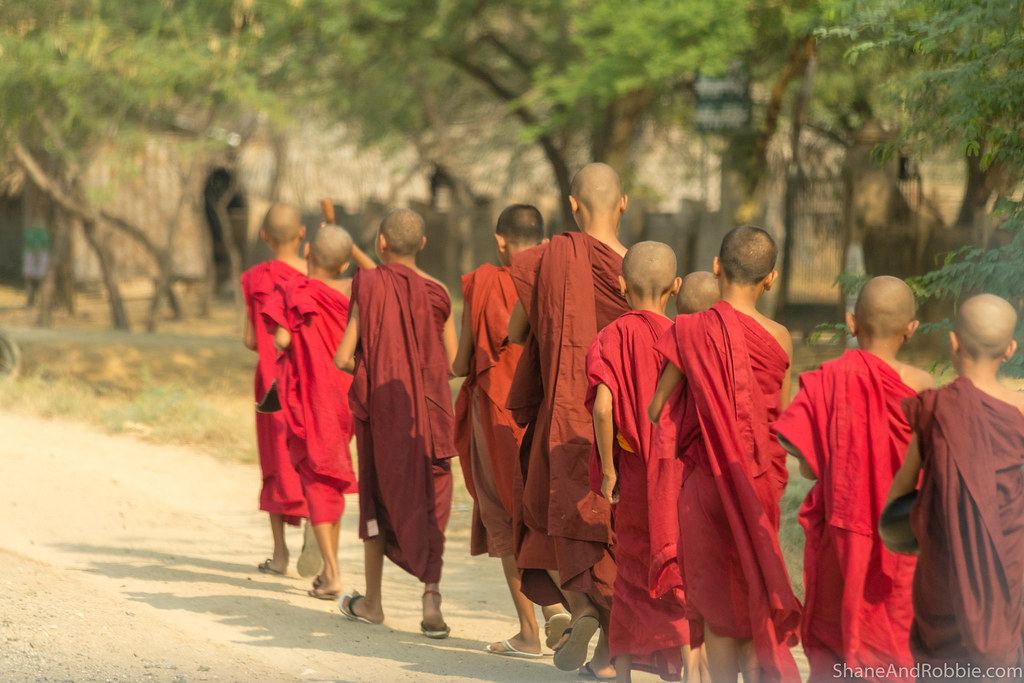 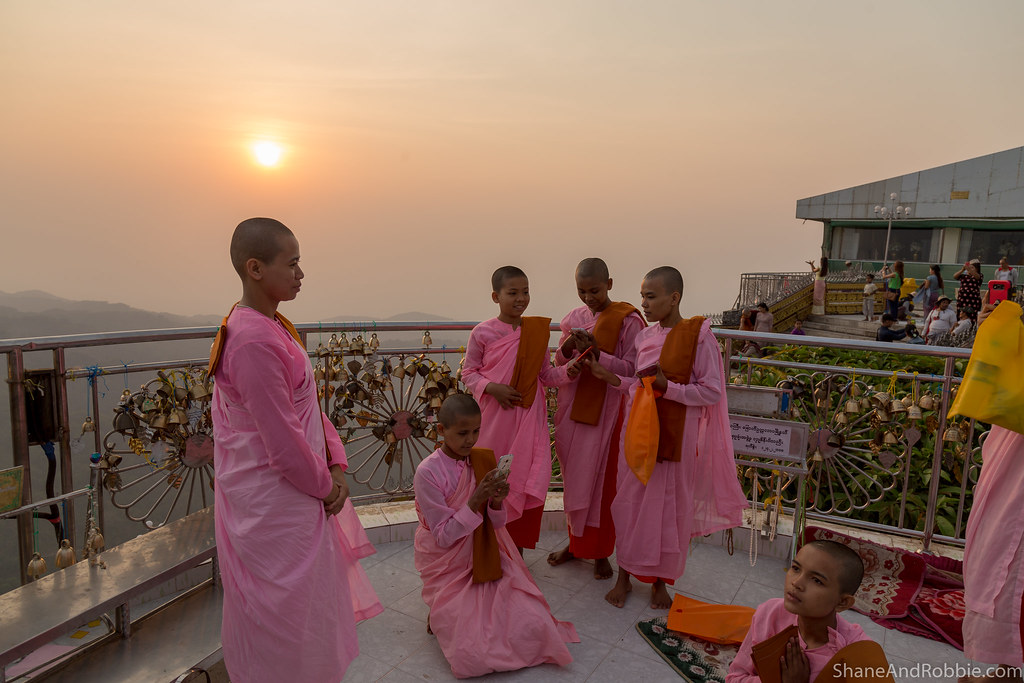 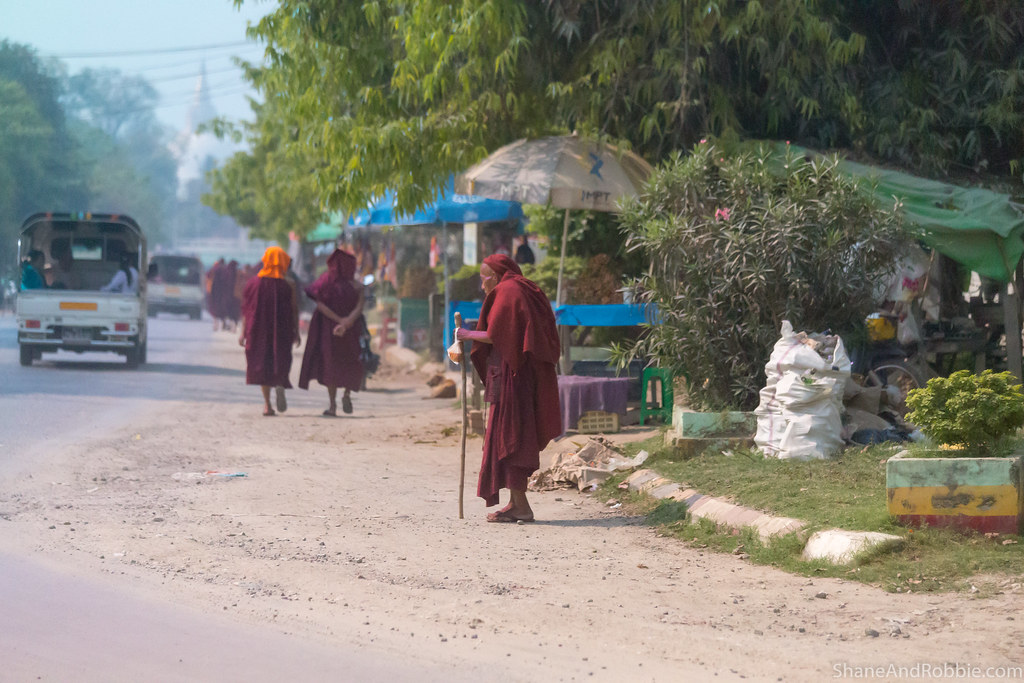 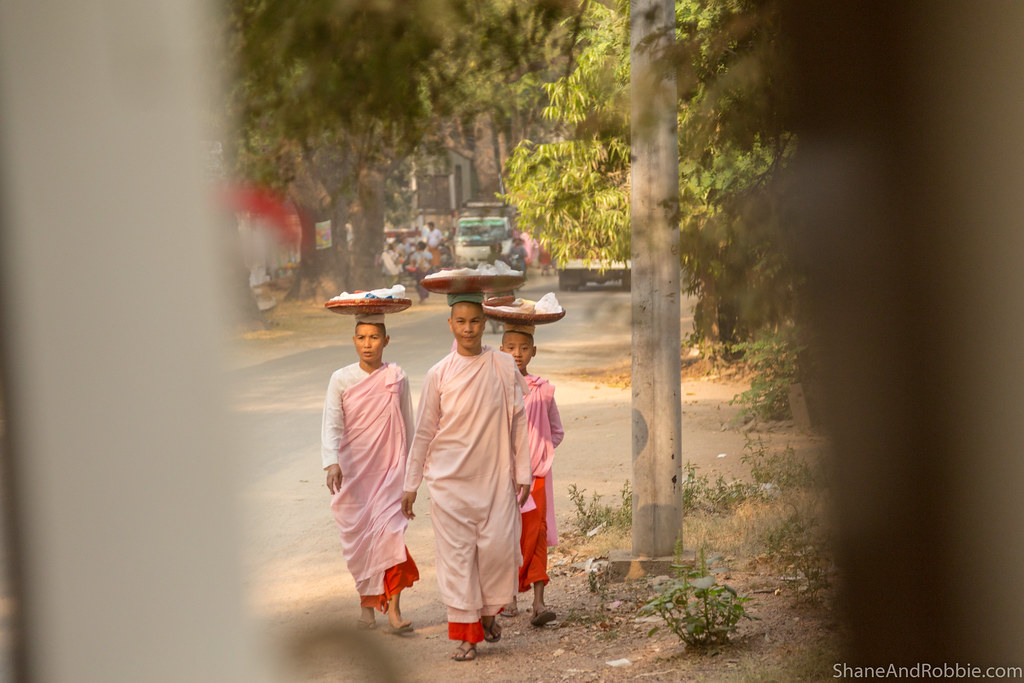 After the colour and excitement of the shinbyu ceremony we headed off to the Shwenandaw Monastery, a 19th teak structure famous for its intricate wood carvings. Originally the ornate carvings of Shwenandaw Monastery were gilded in gold leaf, and even today a few small patches of gold can still be seen in some of the hidden corners. The building was once housed in the grounds of the Royal Palace but was moved in the early 20th century (which is the only reason it survived as the rest of the buildings within the place grounds were destroyed when Mandalay was bombed during World War II). 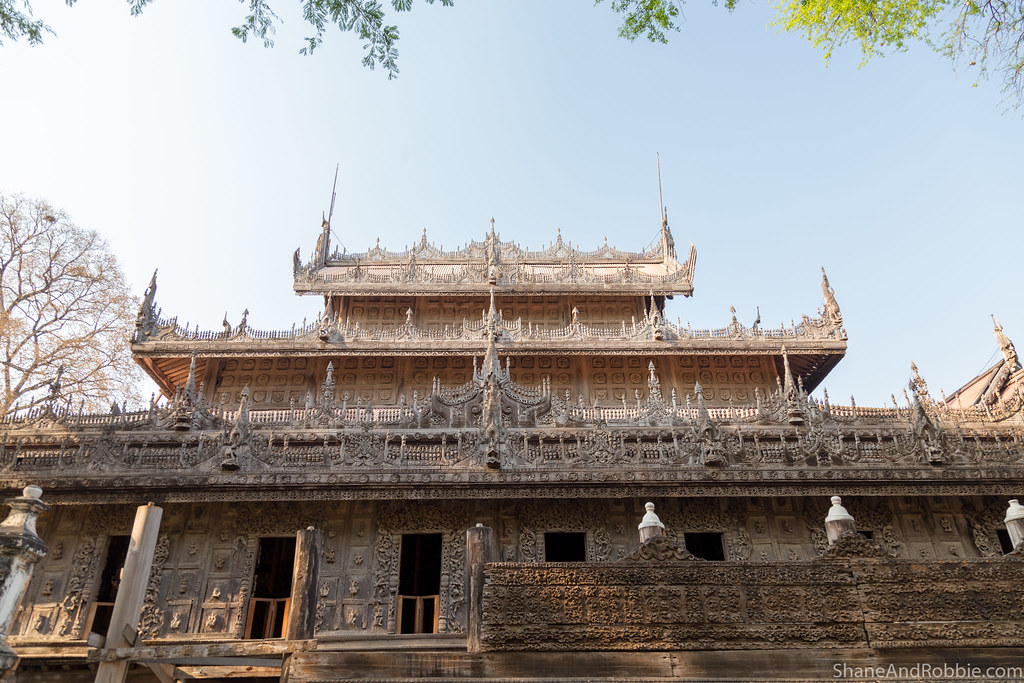 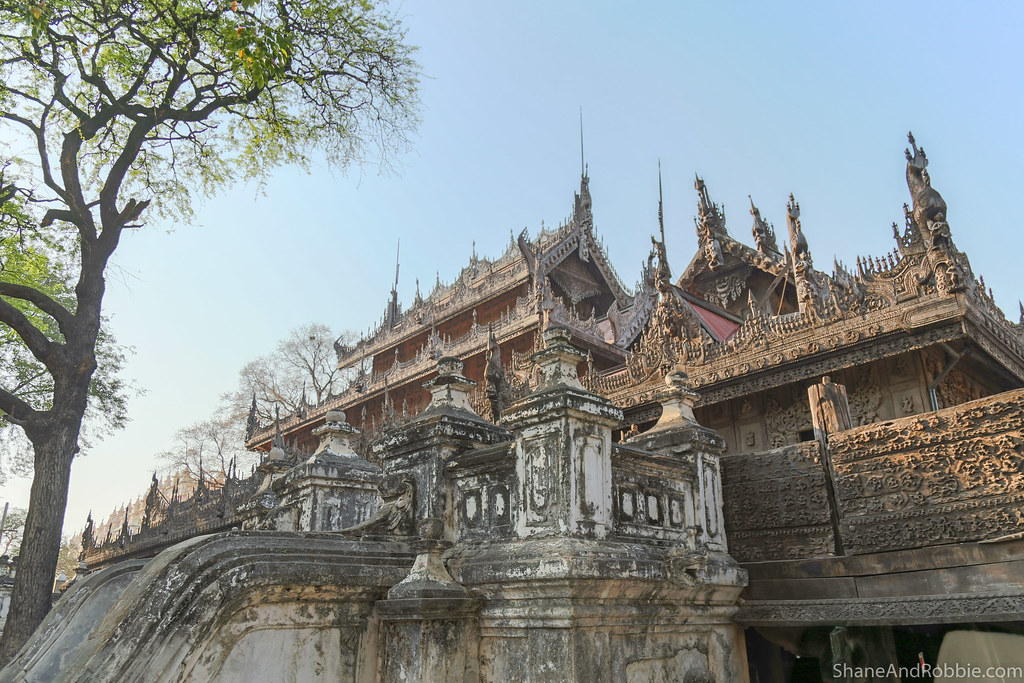 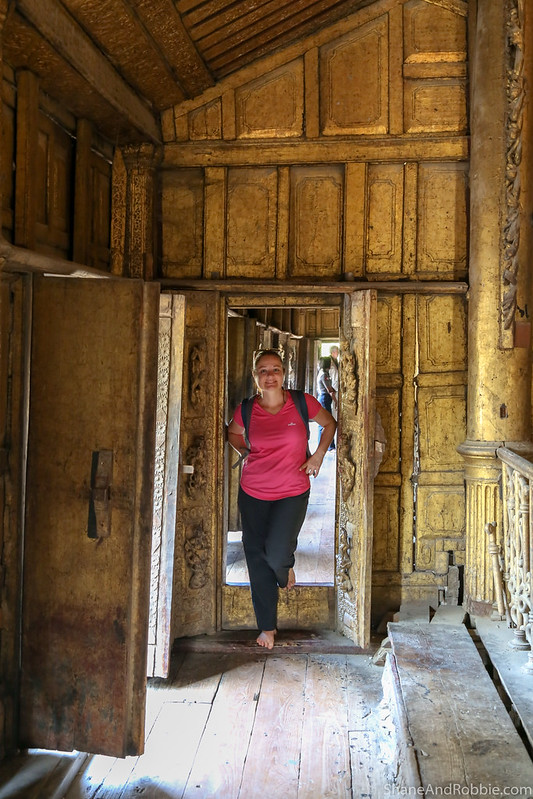 Continuing on we then went to see the Kuthodaw Pagoda, home to the world’s biggest book. The “book” in question is actually made up of 729 stone slabs, on which are inscribed the entire Tipitaka (i.e. Buddhist scriptures). Each stone is housed in its own white stupa, and the whole compound covers over 10 acres. It was fascinating exploring the area, especially as the light began to wane and the shadows lengthened. 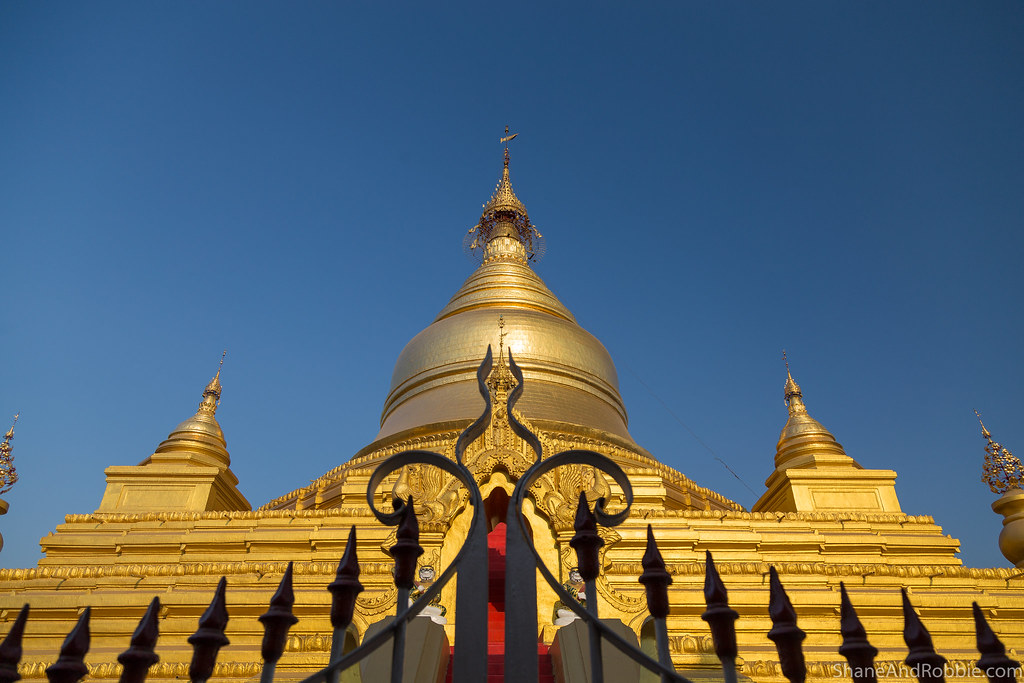 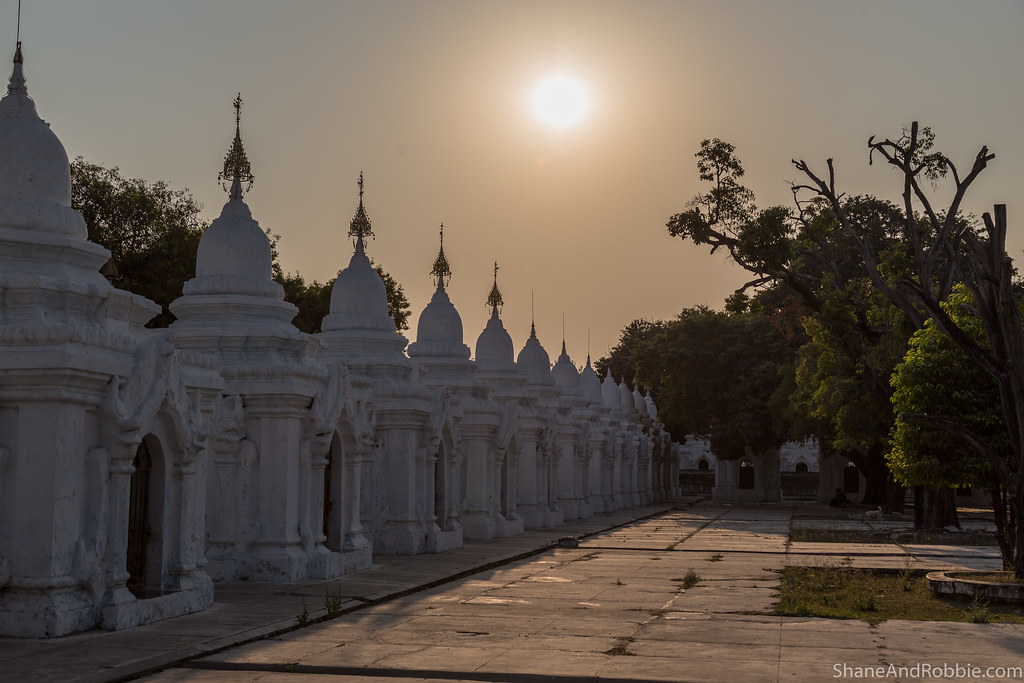 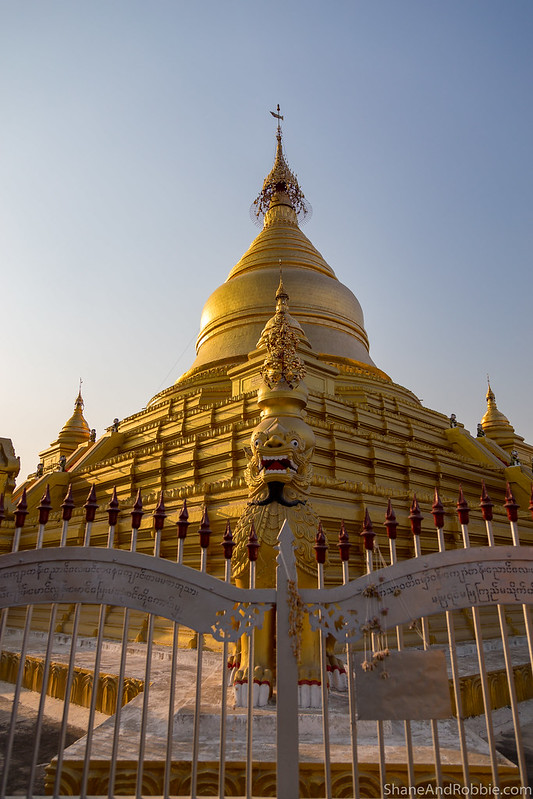 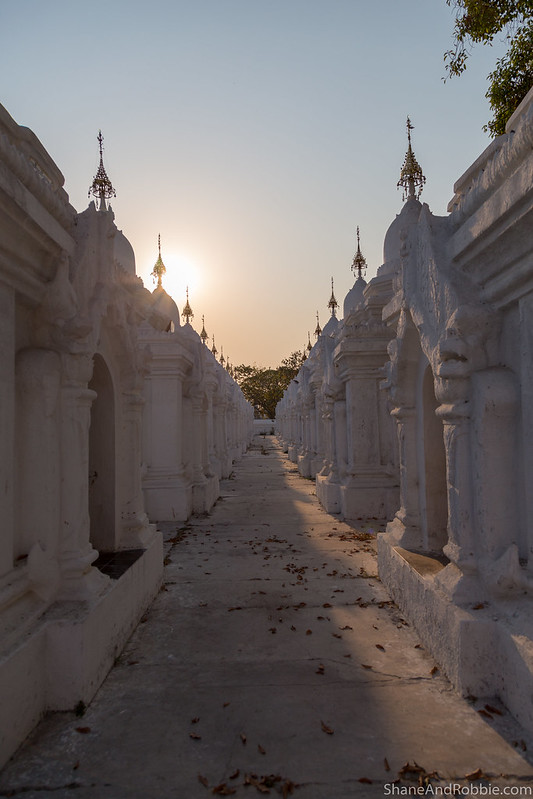 A short distance away from Kuthodaw Pagoda is Mandalay Hill, one of the most visited places in Mandalay – especially at sunset. We joined the crowds and rode the multiple escalators up the hill (yes – escalators), finding a quiet spot to sit and enjoy the end of yet another day in beautiful Myanmar. 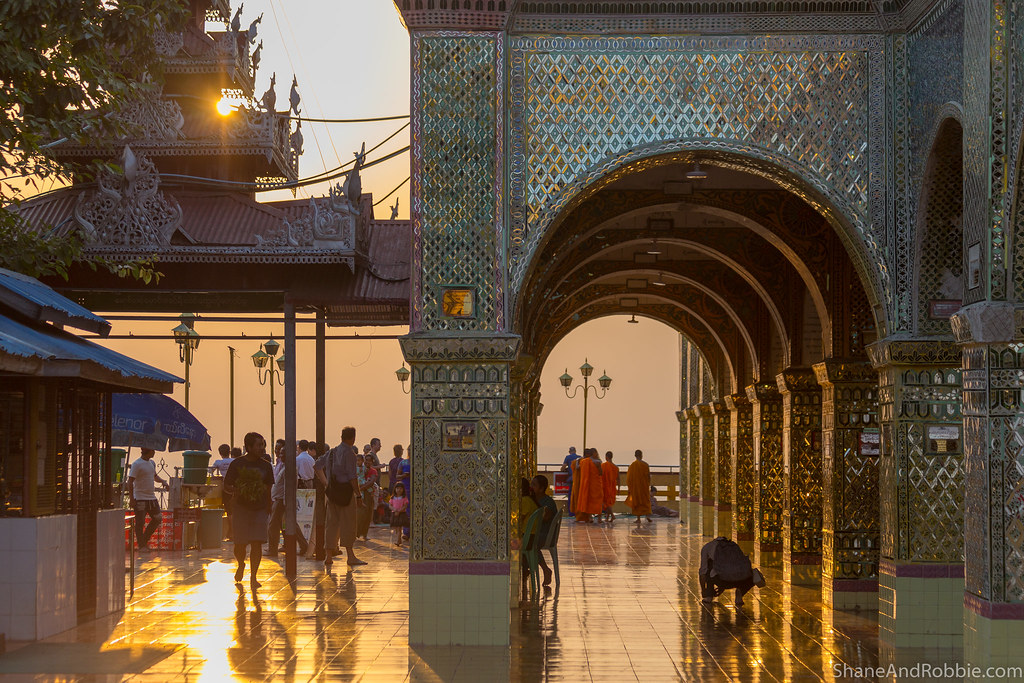 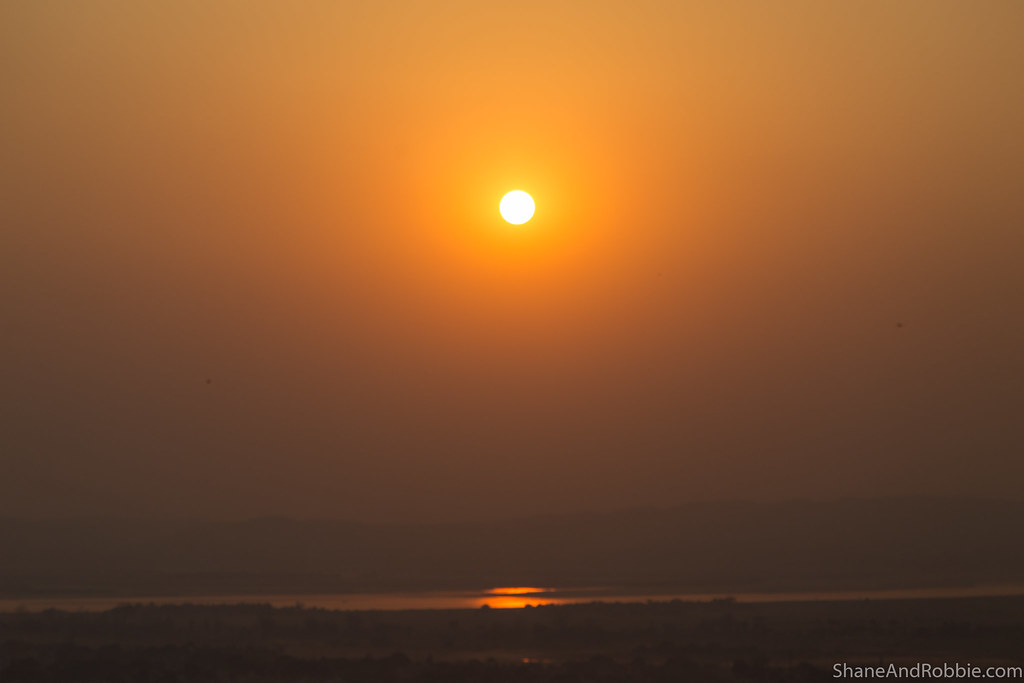 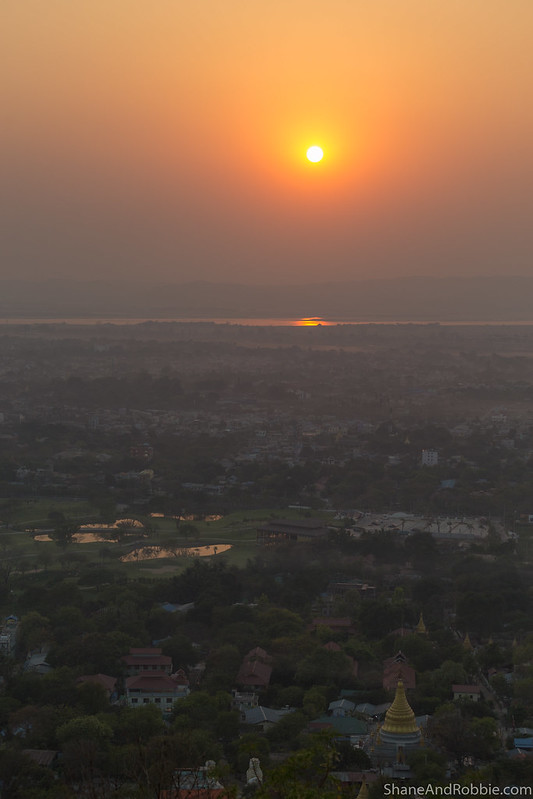 Once the sun had set we went all the way back down to the base of the hill, cringing at the feeling of the ridged escalators on our bare feet*. A short drive and we were back in town, where dinner and drinks on a rooftop bar helped make the perfect end to a perfect day in Mandalay!
*We have quickly learned to wear shoes that easy to slip on and off as you have to take your shoes off at the entry of every religious site. Given there is a pagoda at the top of Mandalay Hill, this means you have to leave your shoes all the way down the bottom, and ride up and down the escalators barefoot. We’ve also learned not to get too squeamish about how dirty, dusty, moist, or sticky the floor is at the various pagodas we’ve visited – best not to think about it and just wash feet and shoes at the end of each day! 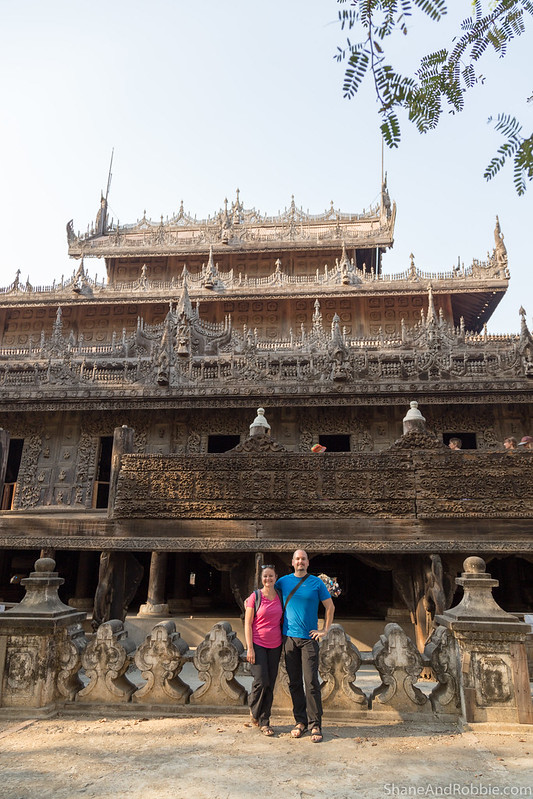