A SLICE OF BURMESE VILLAGE LIFE
Myanmar has a population of 60 million people divided across 130 ethnic races; 80% of its people are Buddhist and 75% of them live in rural areas. We have always found rural life fascinating, primarily because it represents such a different way of life to how WE live in modern, urban Australia. And so today we went to visit the small village of Myat Chan, some 2 hours away from Bagan on the other side of the Irrawaddy River. 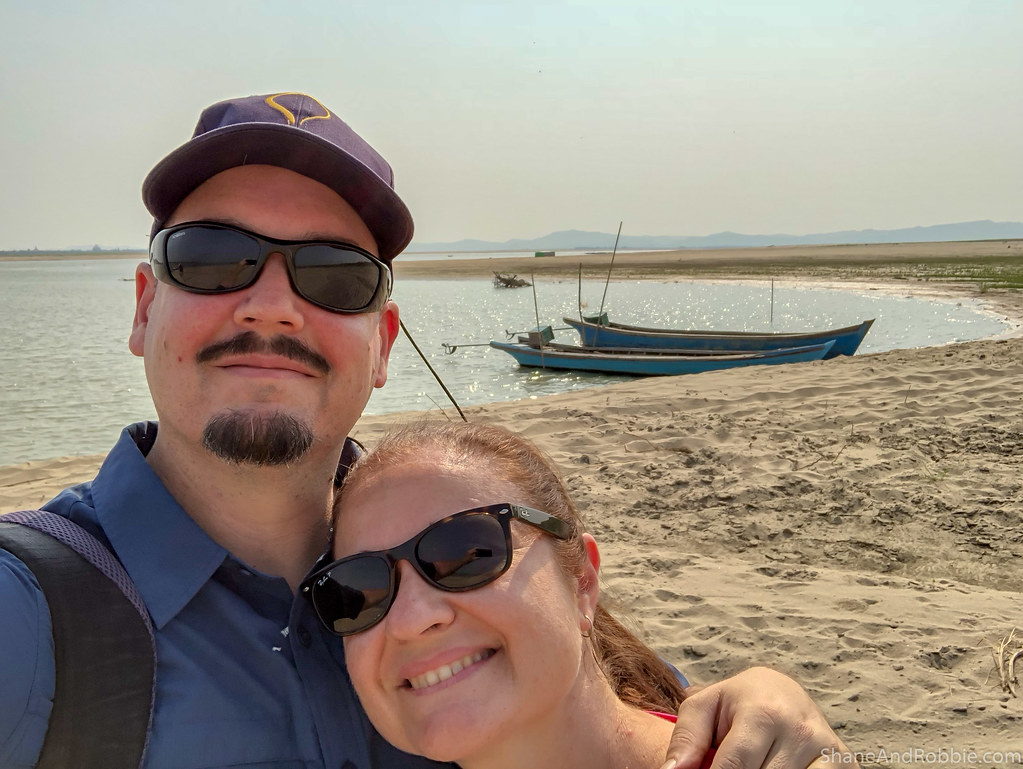 Before 1885, Myanmar was ruled by a xenophobic monarchy, after which it suffered under British colonial rule for 60 years, and was then occupied by the Japanese during World War II. Once it gained independence in 1948, the country endured a long period of isolation, extreme poverty, and tyranny under the oppressive rule of a military junta. 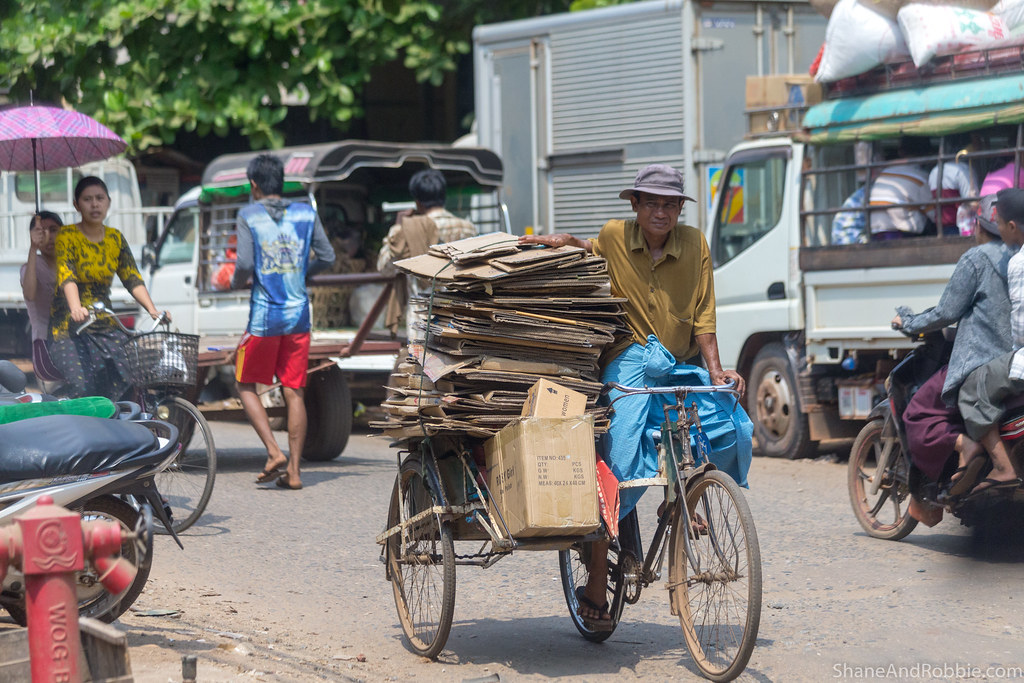 Myanmar has missed many of the technological advances of the past 70 years. The country has been struggling to catch up since an elected government came to power in 2011; and whilst some advances are apparent (e.g. the ubiquitous presence of mobile phones), in many ways we have found Myanmar to be a country stuck in a time-warp. Most of the population still lives by candlelight, for example, as 75% of households get no electricity (despite the nation having abundant oil, gas, and hydropower resources). 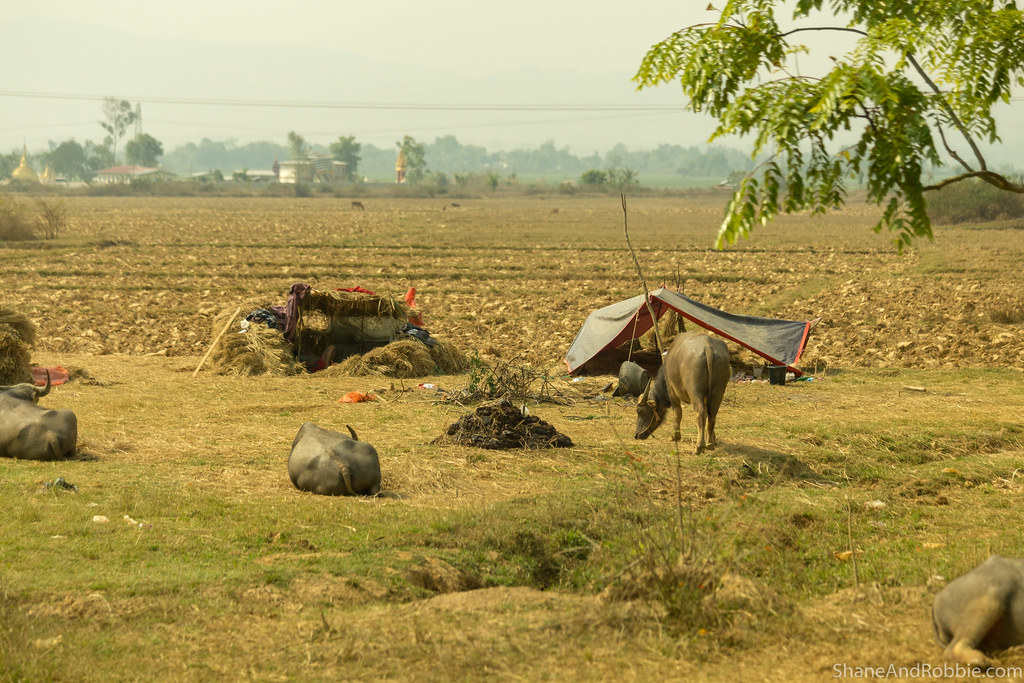 Even by the standards of authoritarian regimes, Myanmar seems to exist in an epoch unto itself, a remnant of the prosperous country that was once a centre of learning and the world’s largest exporter of rice. This is part of reason we, and millions of tourists like us, are now flocking to visit Myanmar. Like Cuba, this country offers us a glimpse into a different world. One which, in all honesty, is equal parts terrifying and fascinating. Everything here is just so REAL compared to our modern, Western lifestyle. We are so detached from the reality of life in Australia – from the reality of where our food comes from; of how much effort and energy it takes just to survive; and of how precarious life can be. In that sense Myanmar provides a fascinating insight into a far more grounded, authentic way of life. At the same time however, issues of basic hygiene, abysmal health care, and rampant corruption make it seem like a terrifying place to live. 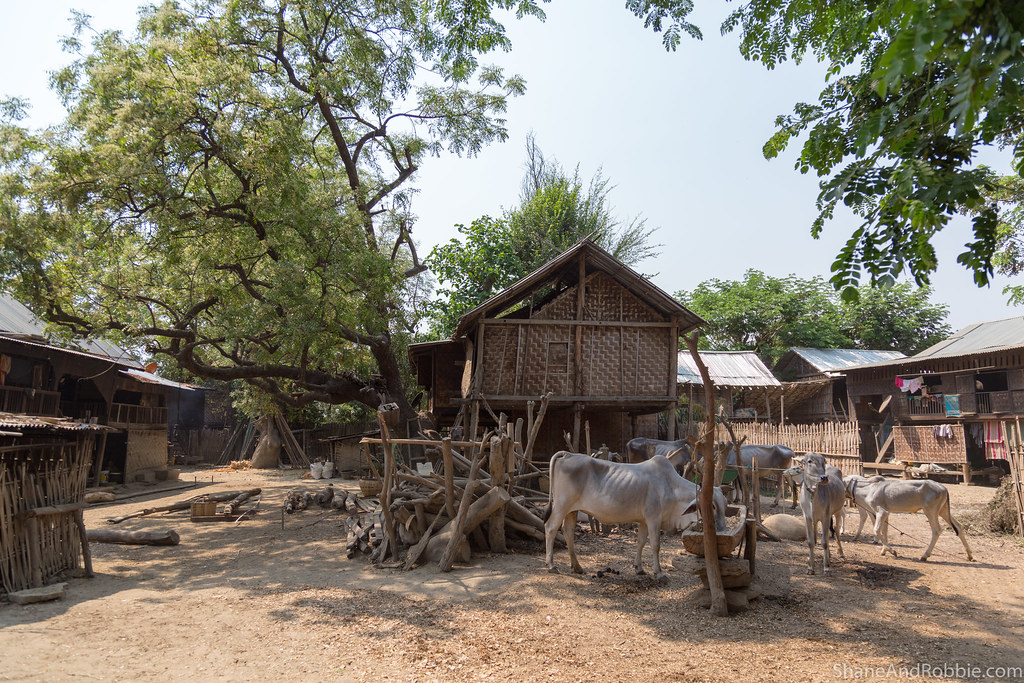 From what we saw today in Myat Chan, farmers here still live in the way their forefathers did. The seasons determine the pace and rhythms of their life, injury and death are not uncommon, and material wealth is virtually non-existent. Despite this, however, the people of Myanmar seem content in a way that we can’t help but envy! 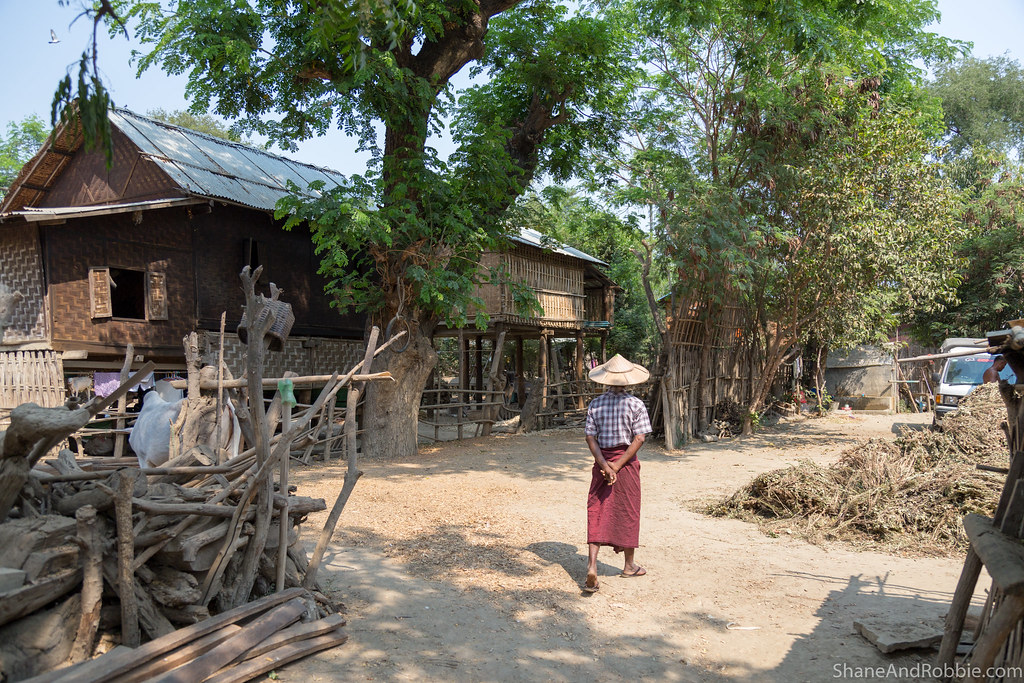 Perhaps the underpinning Buddhist faith that flows like an undercurrent through every aspect of Myanmarese life is the root cause of this. Maybe it’s the warmth and support they get from being part of tightly knit communities; or maybe it’s because their hard work is so meaningful*. Whatever the cause, contentment seems endemic, and we have never encountered so many smiles as we have here in Myanmar.
*Work undoubtedly takes on a whole new level of meaning if no work = no food! 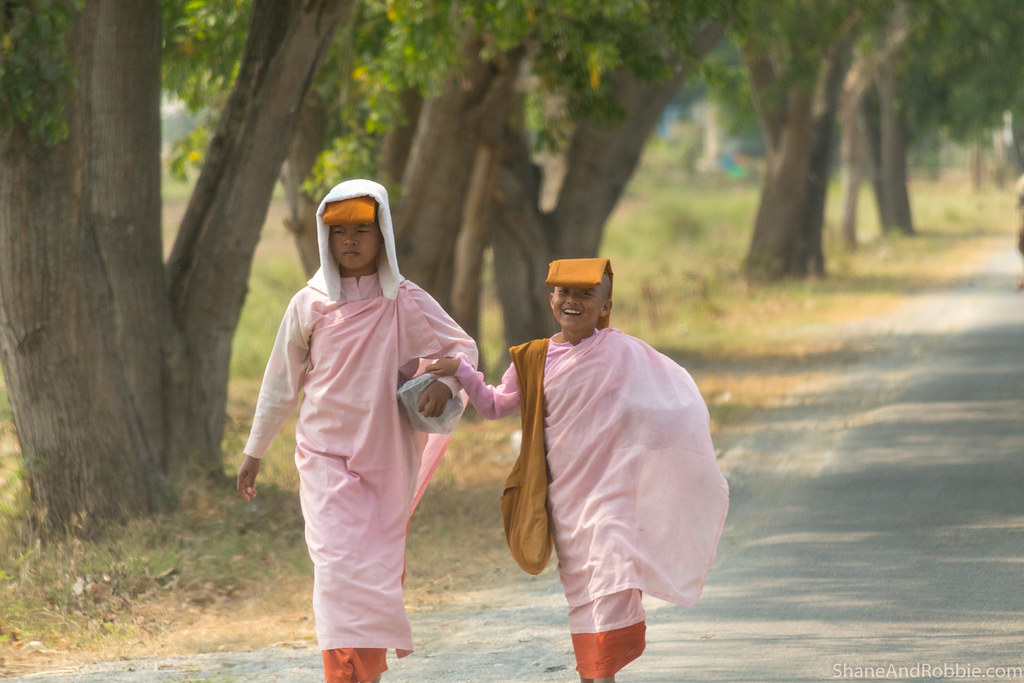 Like many farmers in Myanmar, the 217 resident of Myat Chan live in wooden homes perched high on stilts. During the dry season, they use the open-air ground floor of their homes as a place to rest during the hottest parts of the day. In the wet season the undercroft floods and their homes are only accessible by boat. 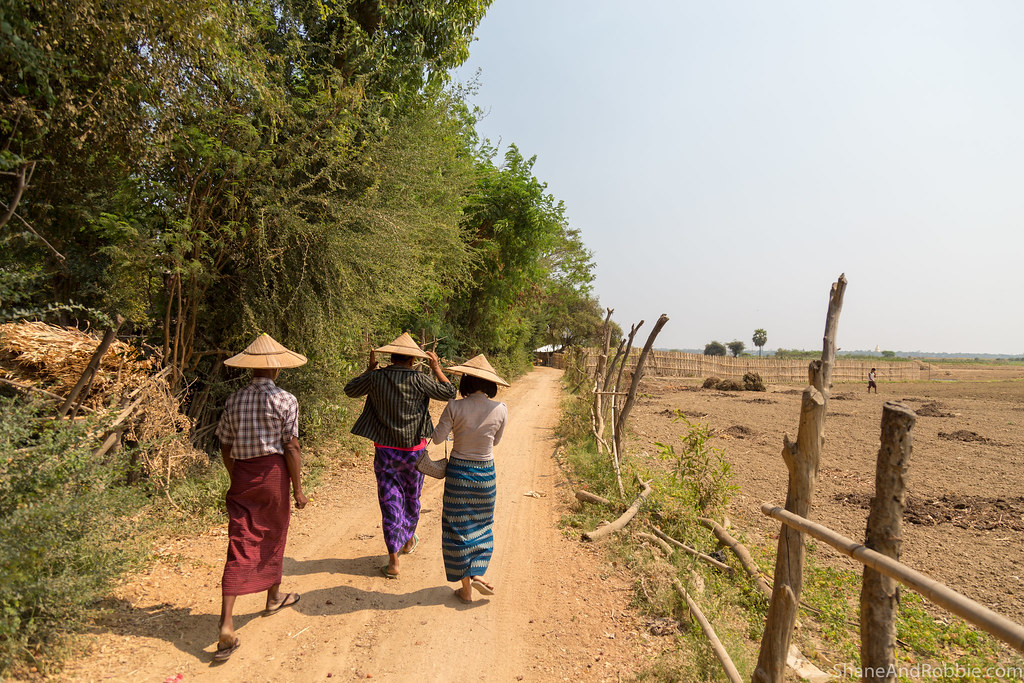 Surrounding the cluster of homes that made up Myat Chan, fields spread as far as we could see. The villagers had recently finished harvesting their crop of corn, chickpeas, and legumes, and were in the process of drying the corn and seperating the beans and chickpeas from the chaff. 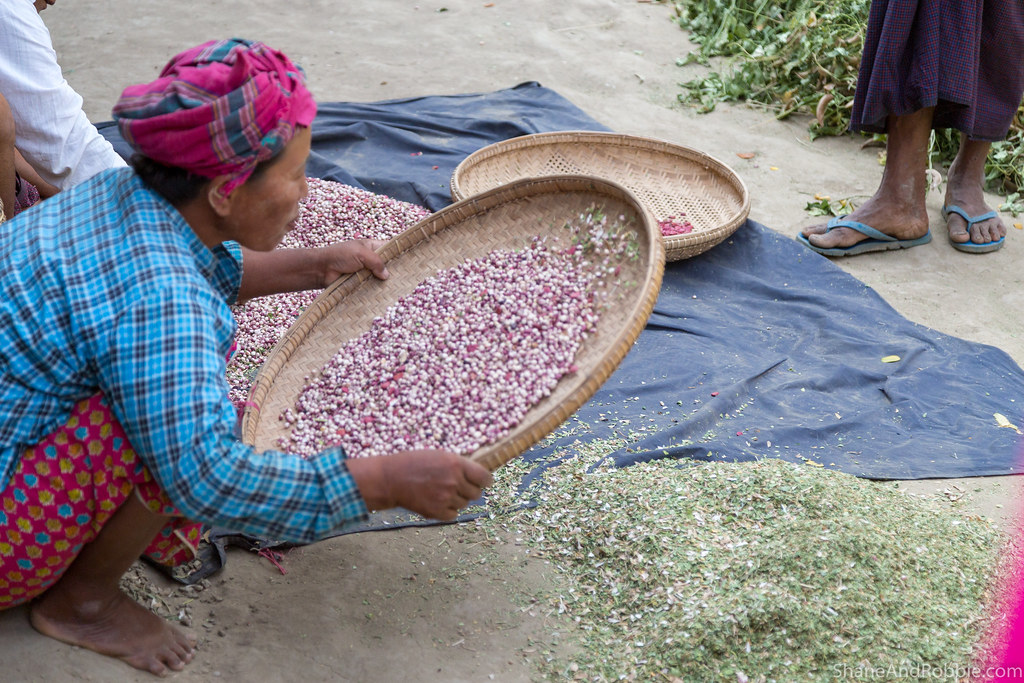 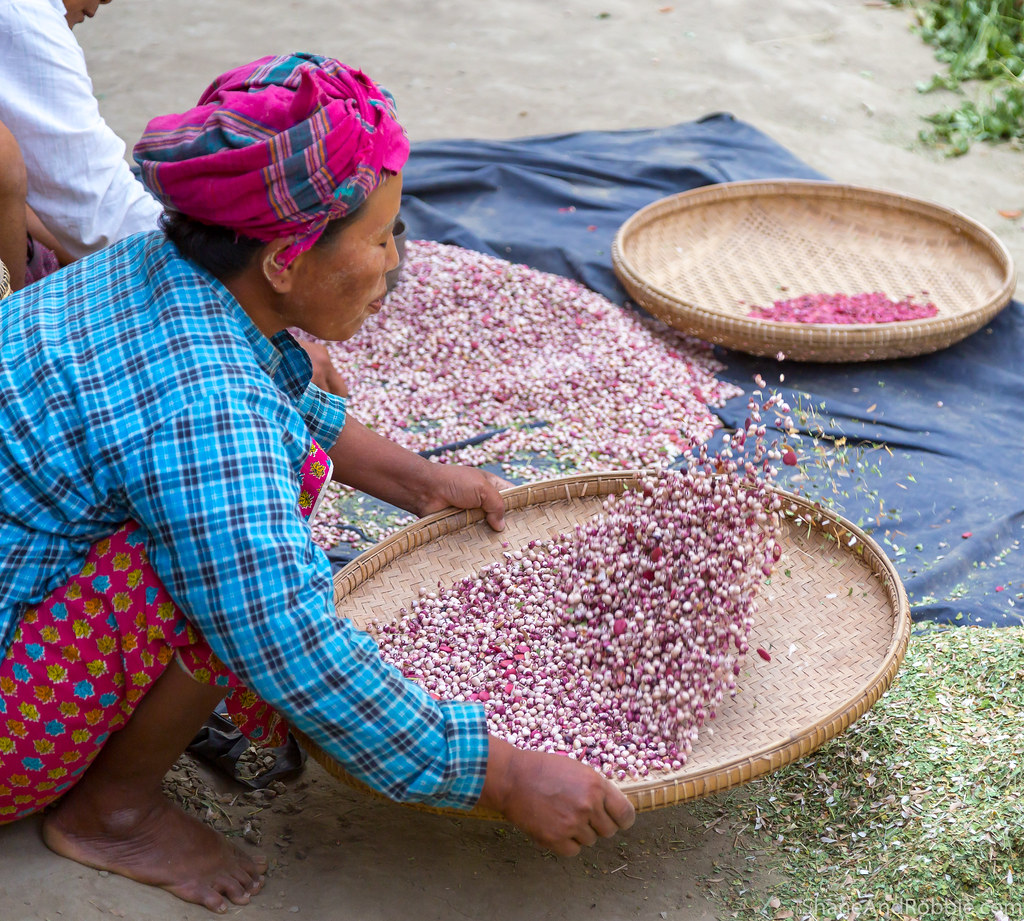 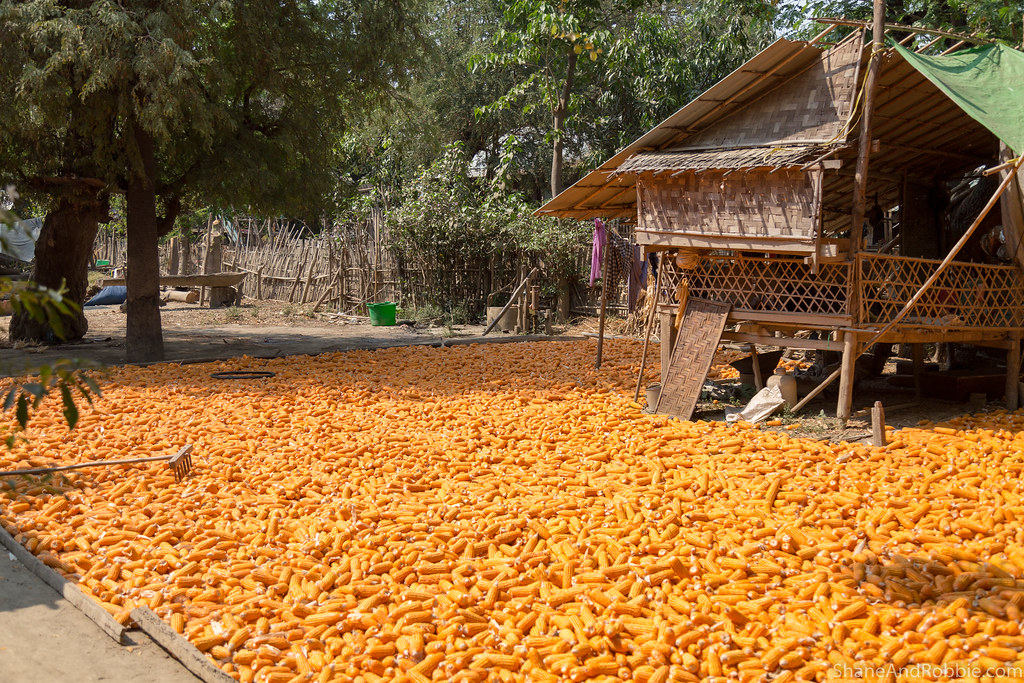 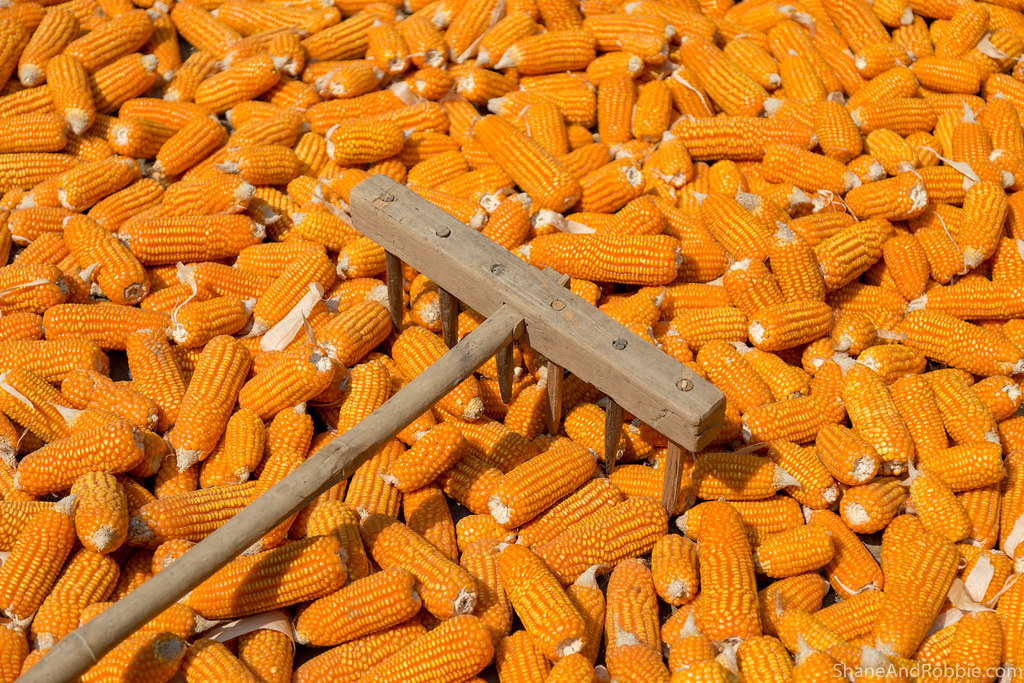 There was a pump for water, and the best corners of the village were set aside for their prized animals – the oxen, chickens, and pigs that represent real wealth in a rural village like this. 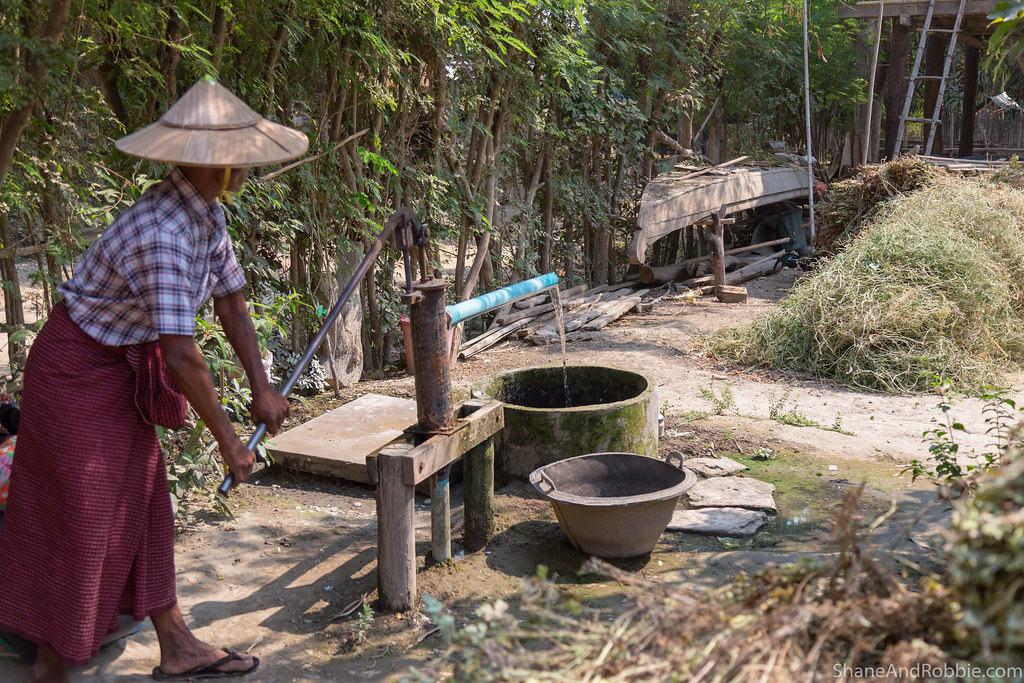 Whilst most of the villagers had no electricity supply, a few had saved enough to buy solar panels and had some basic modern conveniences – e.g. television*.
*Most popular TV show in Myanmar? Dae Jang Geum, also known as Jewel in the Palace, a Korean television soapie set in the 15th century that is 120% melodrama. Myanmar’s only television network currently shows more than 10 Korean programs per day, accounting for more than 90% of TV shows broadcast here! Korean pop culture is so dominant here – it’s on TV, on the radio (K-pop is everywhere), and all over the place in the printed media. In the cities we’ve seen many teenagers sporting typically Korean styled haircuts. 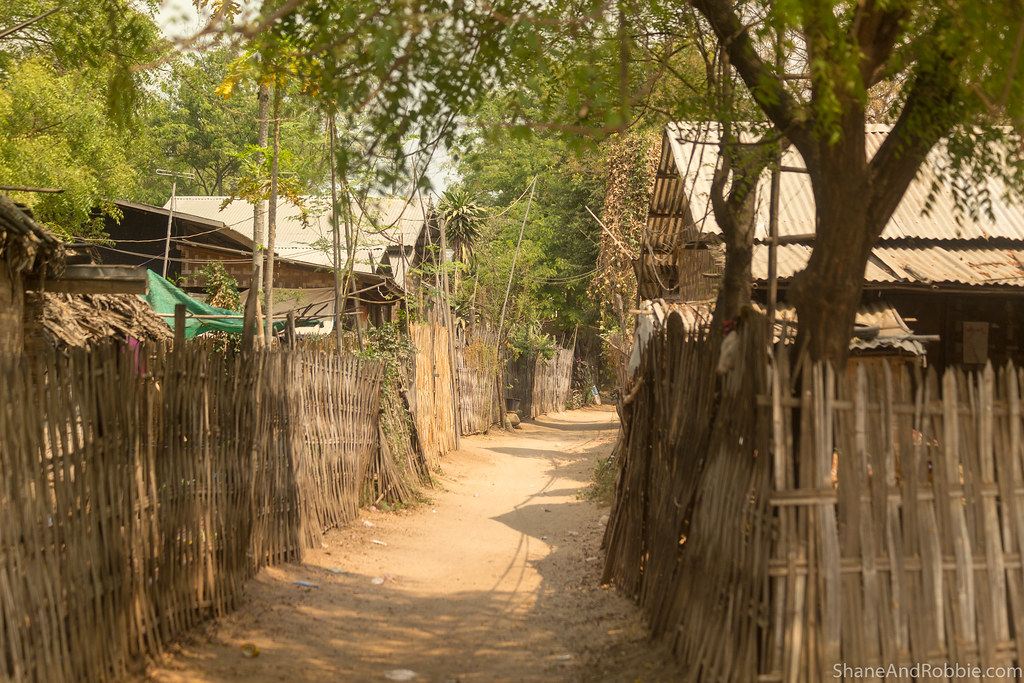 No one had a fridge though – the electricity supply is too inconsistent. That means food has to be picked/killed fresh every day. It’s a hipster’s dream: EVERYTHING is seasonal, organic, free range, and sustainably sourced!
*The flavours of food here have been incredible – even a humble tomato tastes like something from another planet. Nothing we buy at home, no matter how organic/biodynamic/free range it is, matches the food here for sheer flavour. Sure, some of the chicken we’ve eaten has been a bit tough (that bird had LIVED man!), but man was it tasty! 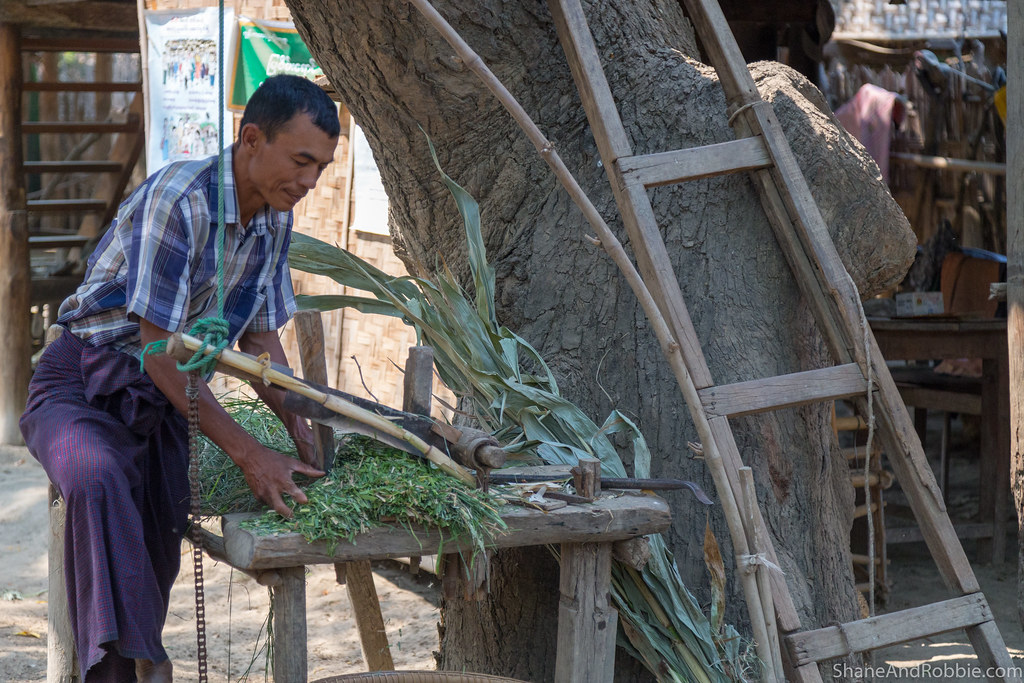 Markets we’ve been to throughout our trip so far have been a sensory delight of sights and smells. We’ve seen all manner of fresh fruits and vegetables; chilli, ginger, garlic, and onions (staples of Myanmarese cuisine); chicken, duck, and quail eggs; fresh chicken and fish (or not so fresh if you get to the market around lunch time when it’s been 40oC and 100% humidity all morning!); and everywhere we’ve seen betel nut for sale too. 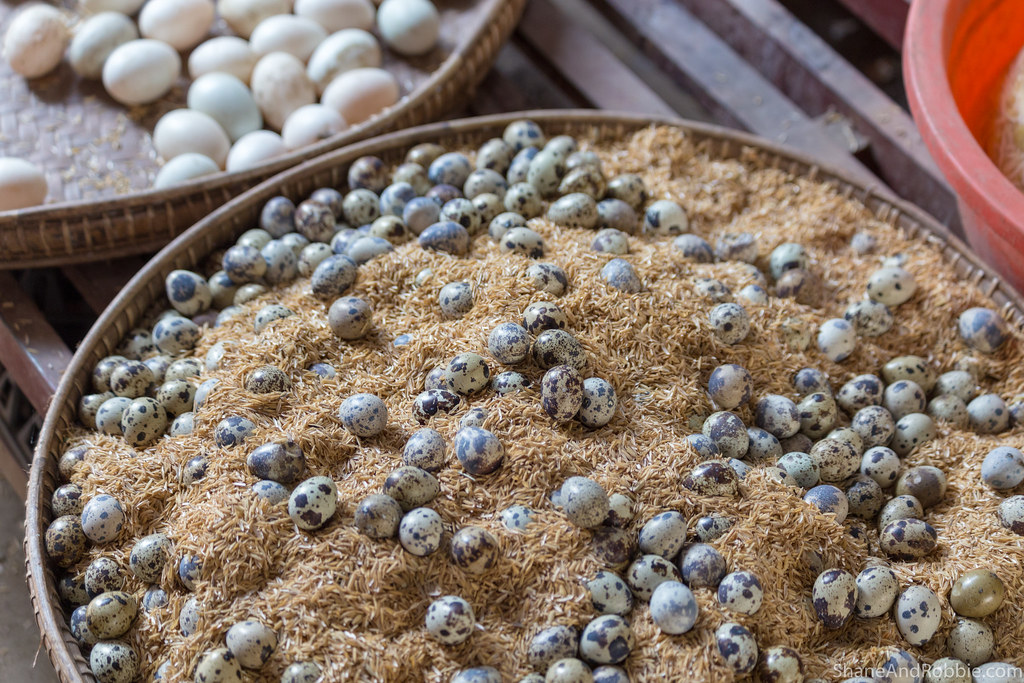 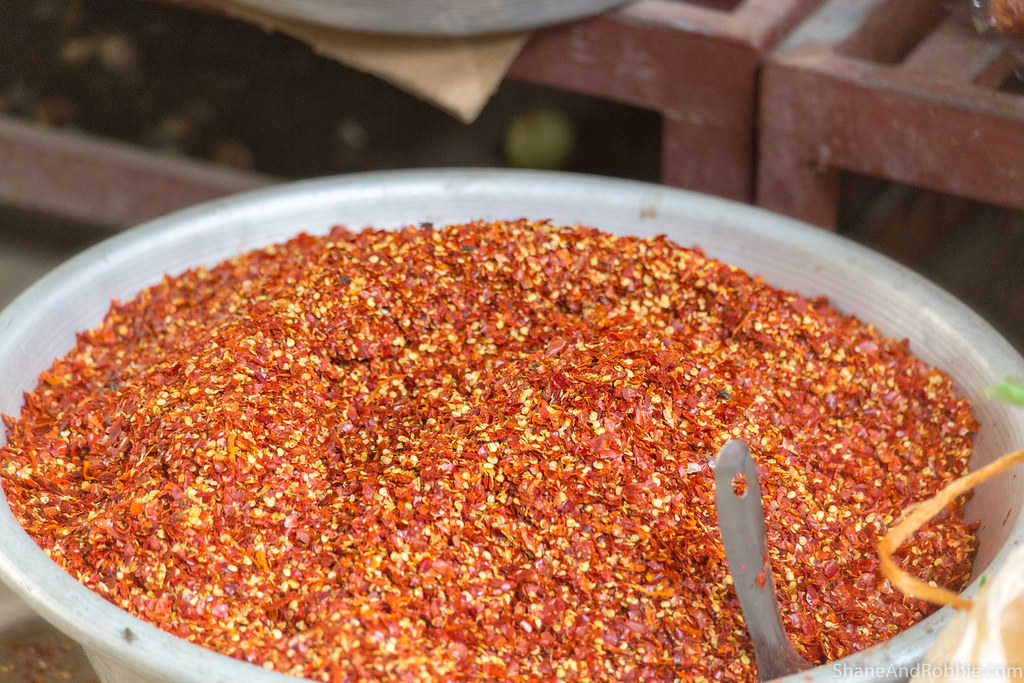 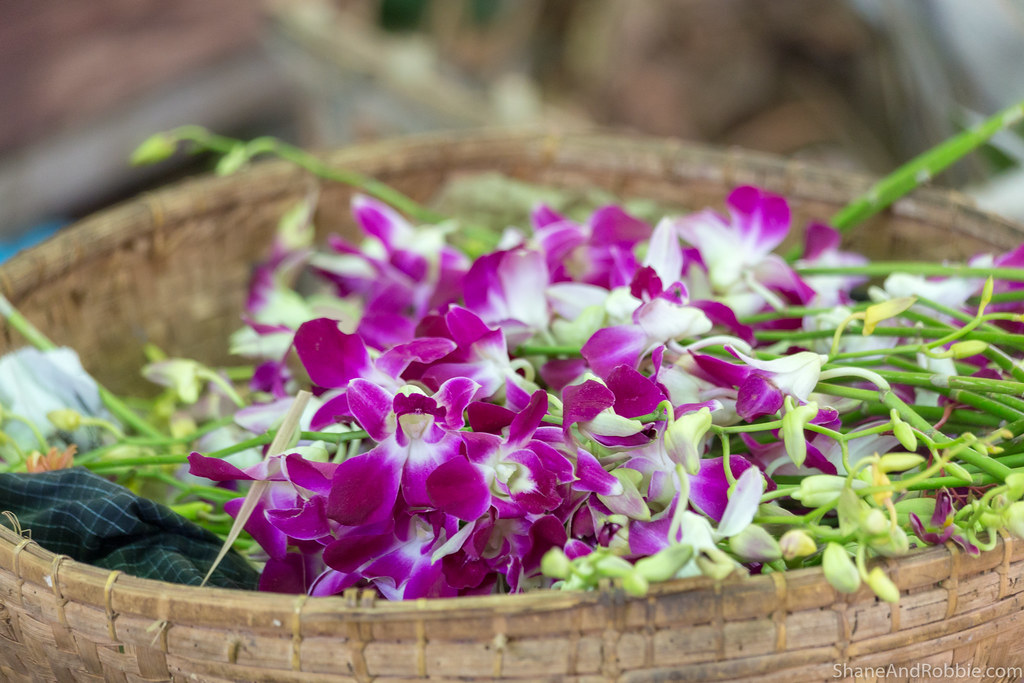 Betel nut is extremely commonly chewed here in Myanmar – mostly by men. We’ve seen many smiles tainted red by the habitual chewing of the combination of thinly sliced seeds from Areca catechu*, a type of palm tree; slaked lime (i.e. calcium hydroxide); and leaves from the betel vine** (i.e. Piper betle). This combination is one of the most popular psychoactive substances in the world, in fourth place after nicotine, alcohol, and caffeine.
*Seeds from the aerca palm contain the alkaloid arecoline, a psychoactive ingredient which is similar to nicotine.
**The betel vine belongs to the Piperaceae family and shares phytochemical traits with the related herb, kava (a herbal relaxant often drunk in Fiji, Vanuatu, and other Pacific Islands.) 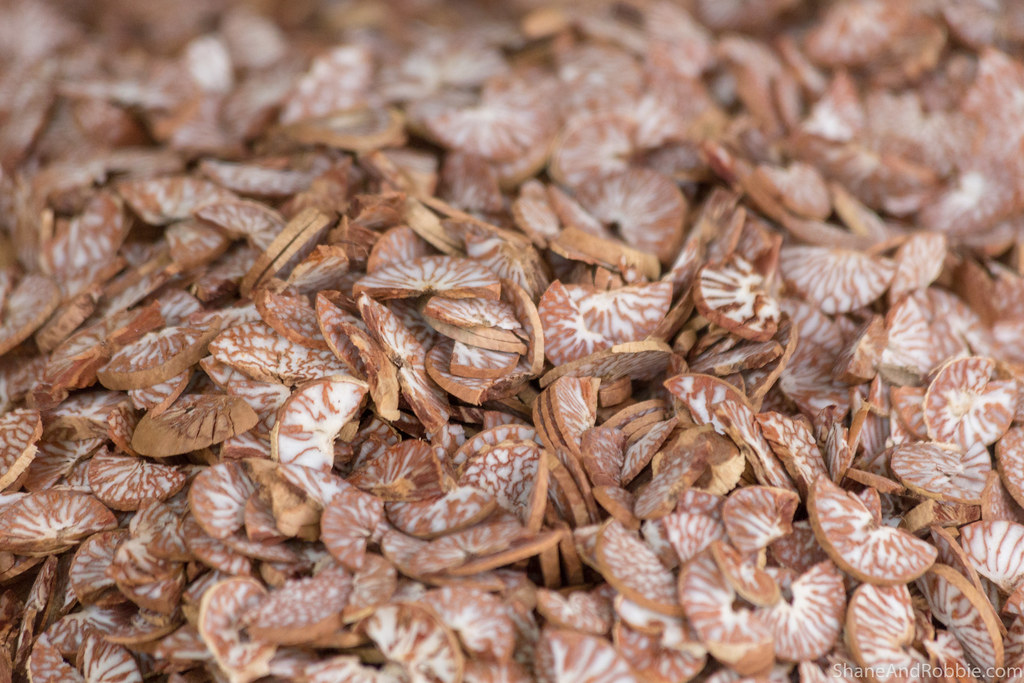 The combination of lime, areca seed, and betel leaf produces a mix of psychoactive phytochemicals that induce feelings of relaxation, euphoria, and wellbeing. Unfortunately the mixture has been shown to be carcinogenic; not to mention how disgusting it is to have to side step the gobs of red muck that chewers spit out. 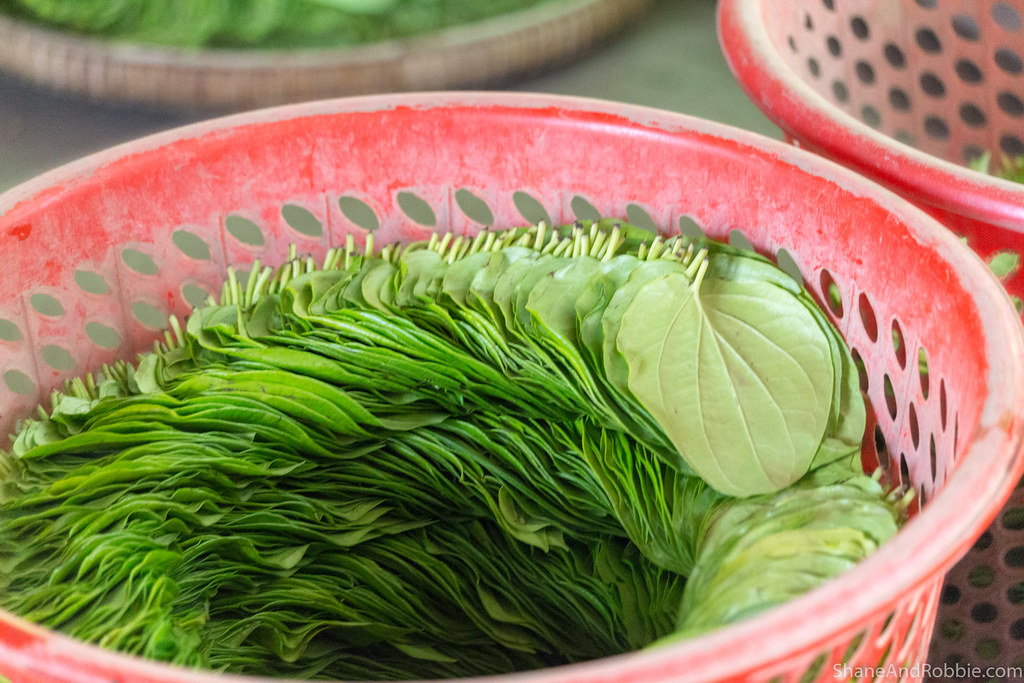 We saw a few men in the village of Myat Chan chewing betel nut, but not many. Most of the villagers were resting under their homes as it’s the hot, dry season and most of the farm work is winding down for the year. There will be no planting again now until the wet season ends*.
*There’s no point planting before the rains as the heavy rains often cause flooding through this area. We were told it wasn’t always this way, but has become an issue in recent years since a government-sponsored construction project changed the course of a nearby waterway. A great example of city planning?! 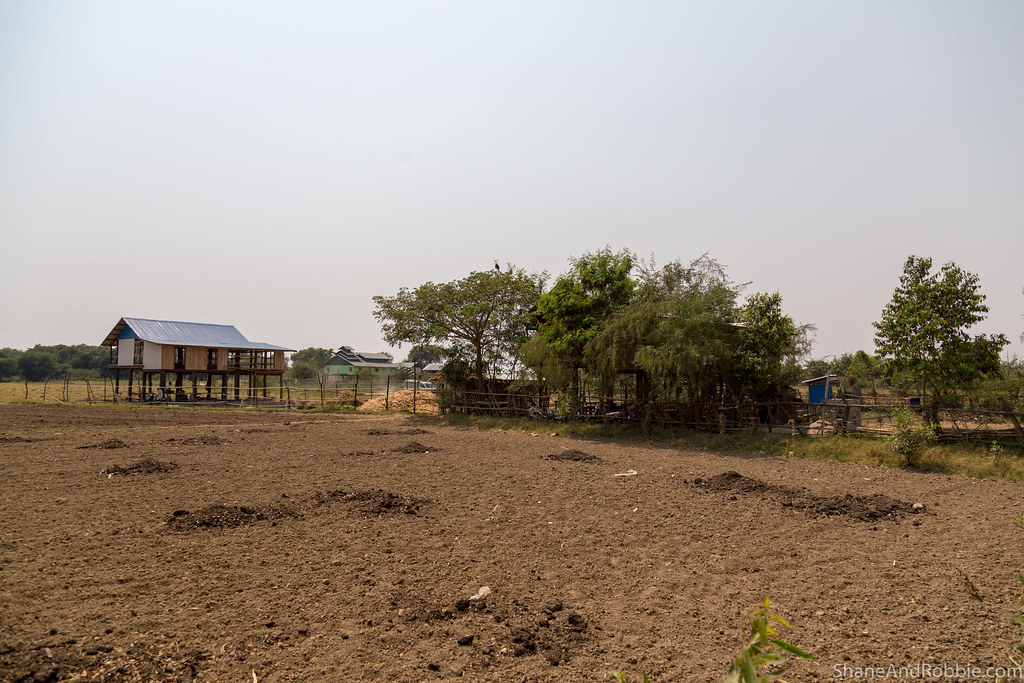 After our walking tour through the village and fields, we had lunch with the village leaders and heard about their plans for their community. The governing council of Myat Chan oversees the spending of funds collected on behalf of all the villagers from sale of communal agricultural products. Highest on the list of priorities for the village were:
• A health clinic with a stock of basic medical supplies and some first aid training for a few of the villagers to help manage first aid situations;
• A village car to take people into town for shopping and act as an ambulance if required; and
• A brick building to house the local monastery (population of 4 monks) which also doubles as the local primary school (where monks do the teaching according to government curriculum);
Such simple desires, but so critical for the long term stability and success of this tiny community. It was actually quite inspirational to hear about their plans and how they are working together to improve everyone’s lives. 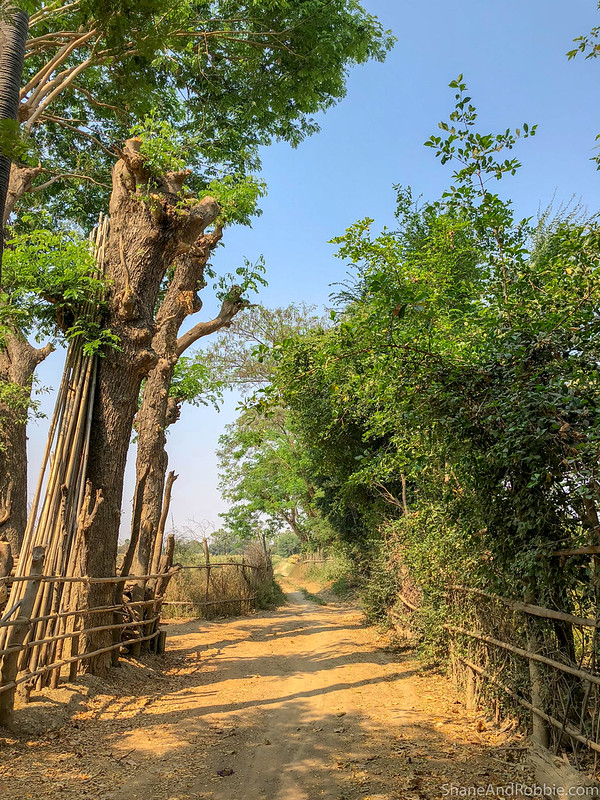 After lunch we were offered a ox-cart ride from the village down to the Irrawaddy River, and from there it was a relaxing boat ride back downriver to Bagan for our final night in this corner of the world. 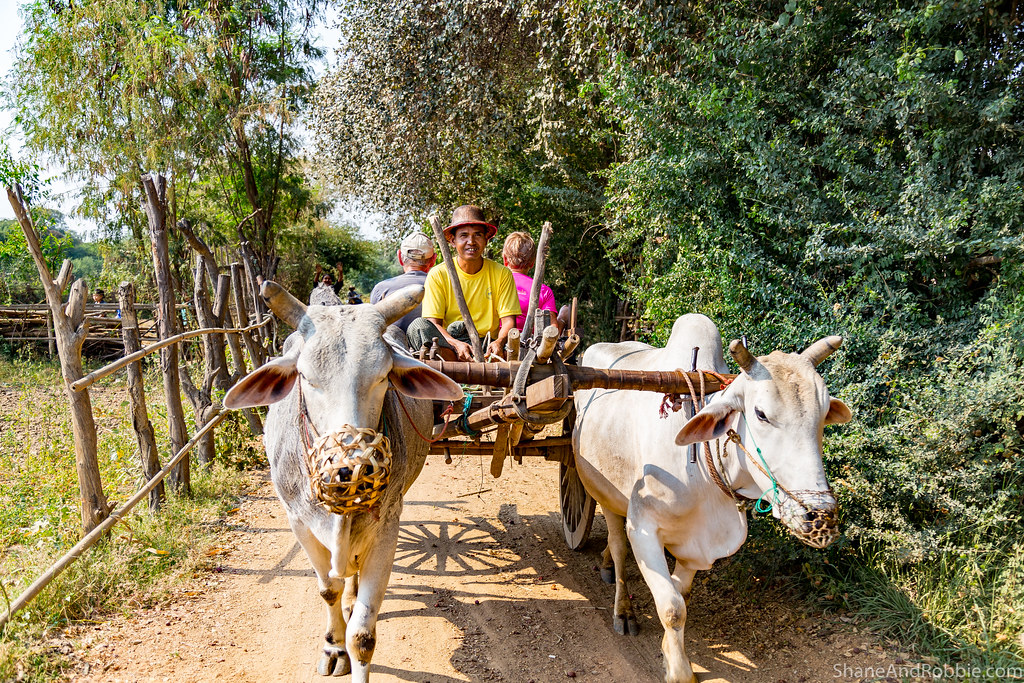 We had dinner at a river-front restaurant and watched the sun set over the Irrawaddy River. A wonderful end to a wonderful day… 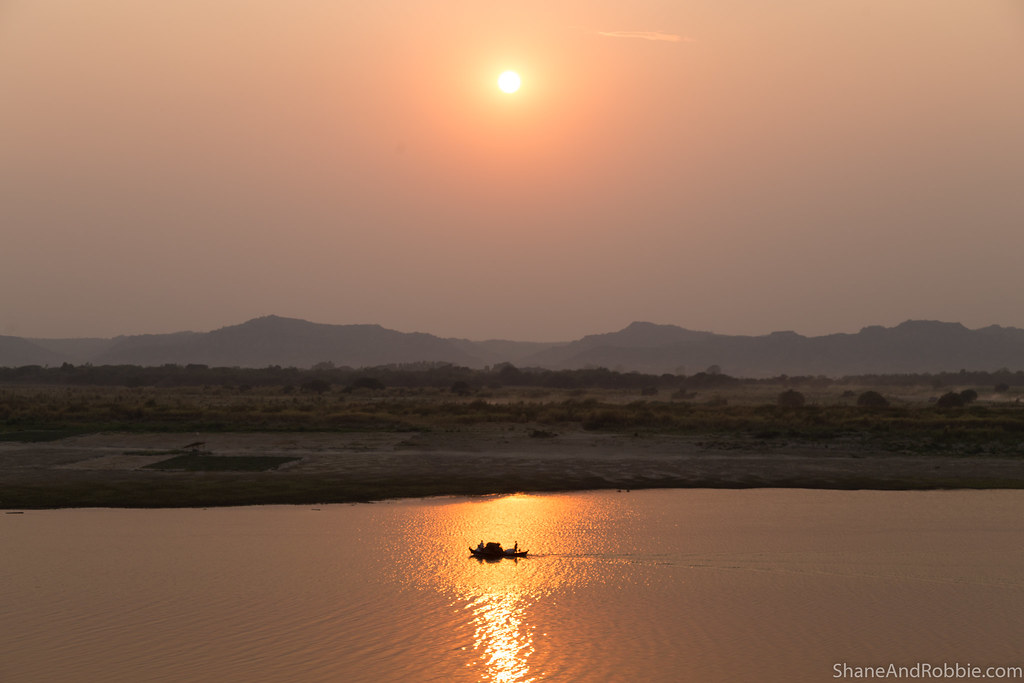