Visiting some of the oldest religious sites in Cairo

After yesterday’s lesson in ancient Egyptian history we took a 3,000 year leap forward in time today and went out seeking some of Cairo’s oldest religious sites. Situated where it is, at the crossroads of many of the world’s most ancient civilisations, Egypt features in the histories of Judaism, Christianity and Islam. Each of these faiths has left its mark on the city, with ancient churches, synagogues and mosques all located within Cairo’s Old Town.

Old Cairo, as it’s known, is the heart of the city and is today home the city’s Coptic Christian community. The term “Copt” refers to the Egyptian Christians who converted by St Mark in the 1st century AD; we learnt today that the Coptic Church is quite distinct from other orthodox Christian faiths and is fascinating in the way it intermingles Arabic and Christian influences. On our guided tour through Old Cairo we got to see 2 of the oldest Coptic churches in Egypt: the Church of St Sergius and the Virgin Mary’s Coptic Orthodox Church (more comonly known as the Hanging Church). 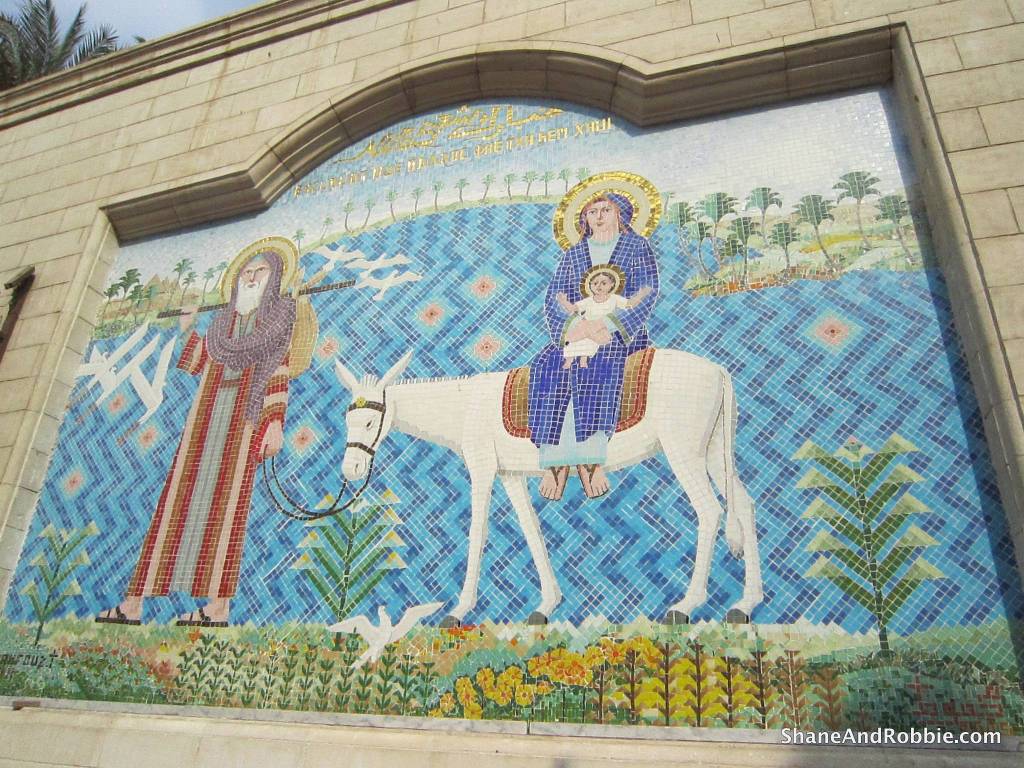 The Coptic Orthodox Church is the world’s oldest Christian denomination.

The Church of St Sergius is the oldest church in Cairo and was built in 348AD atop a cave. According to historians, when the Virgin Mary, Joseph and baby Jesus fled from Palestine, they came to Egypt and hid for a time in this cave. The church itself was small, but beautifully decorated in typically Arabic decorations of repeating gemetric designs. It was quite startling seeing these decorations, which we normally associate with mosques and Islam, in a Christian church.

Shane and our Egyptian guide Hende study the fascinating (typically Arabic) geometric designs decorating the front of this Coptic church.

We also went to see the Hanging Church, which was built in 690AD. It is called the hanging, or sometimes suspended, church because it is built on top of two columns from an old Roman fortress, with its nave is suspended over a passageway. Like the Church of St Sergius, the Hanging Church was richly decorated in geometric designs and contained a large number of icons featuring the Virgin Mary holding baby Jesus in her arms (apparently the Copts were the first to draw Mary and Jesus in this way).

The Hanging Church has been rebuilt and renovated numerous time – its current form dates back to the 1800s.

The beautifully decorated interior of the Hanging Church of Coptic Cairo. 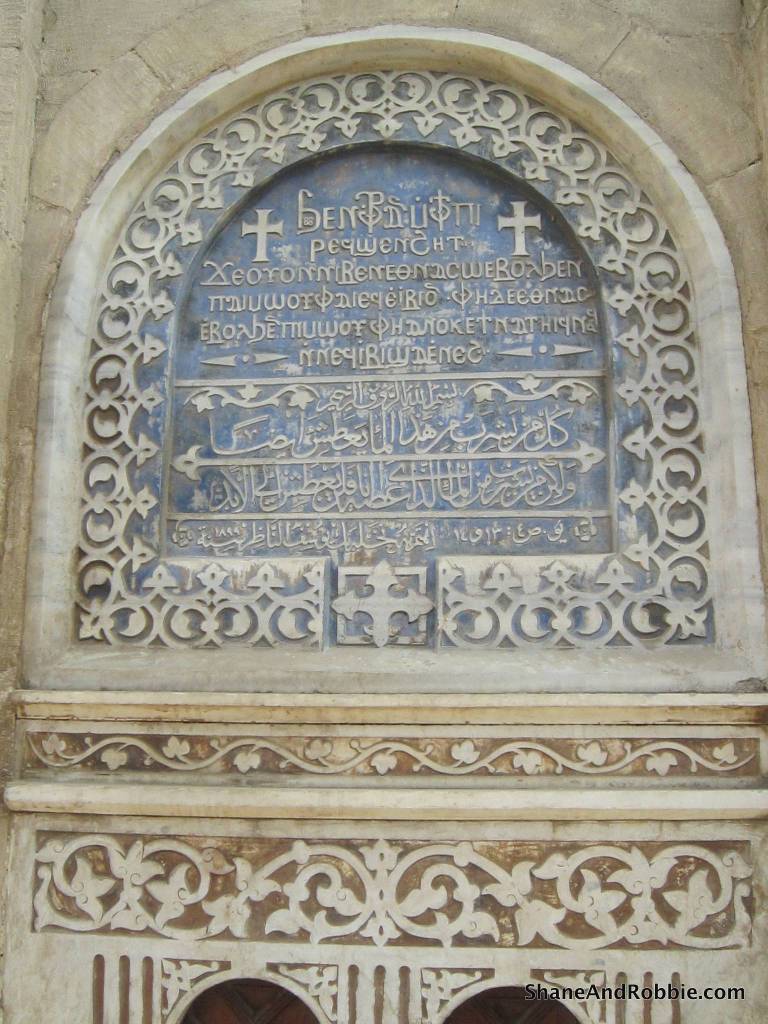 It was fascinating to learn about this ancient Christian denomination, and its rituals and beliefs. The Copts even have their own alphabet and language which is derived from Ancient Greek, Latin and pharaonic Egyptian (seen above the Arabic text here).

From the churches of Coptic Cairo we went to see the Ben Ezra Synagogue – Egypt’s oldest surviving synagogue. The synagogue was established in 9th century and, according to legend, is located on the site where baby Moses was found. The synagogue is just a museum now and is no longer used as there are very few Jews left in Egypt (though there were once many Jews here, particularly in pharaonic and Roman times).

After the ancient Egyptian civlisation of the pharaohs began to crumble around 30BC, Egypt became a Roman state. When the Roman Empire adopted Christiantiy as its state religion in the 4th century AD, many Egyptians adopted the faith. However, when the Arabs arrived in Egypt in 645AD, they conquered the city, ousted the Roman authority and brought Islam with them. Over the next 500 years, the majority of Egyptians converted to Islam (though the Coptic Church survived and remains one of Egypt’s major religious denominations – there are still some 12 million Copts in modern-day Egypt). And so, to complete our day of visiting religious sites, we then went to see the Mosque of Amr Ibn al-As. This was Cairo’s first mosque and is in fact the oldest mosque in Africa. Constructed in 642 AD, the mosque was built on the site where General Amr Ibn al-As* had his tent. With its rich decorations and vast domes, the mosque was awe-inspiring.

*General Amr Ibn al-As was the commander of the Arab army that conquered Egypt in the 7th century.

The courtyard of the mosque, with its central ablutions fountain where people go to perform the ritual bathing required before they go in to the main hall to pray.

The expansive interior of the mosque.

It was really interesting seeing this side of Cairo today; we knew that Islam is the major religion here, but hadn’t realised how many Christians there were in Egypt and how many Jews there once were here too. One of the main things that struck us about the various religious sites we visited today is the peace that they are all imbued with. This silence and serenity was very welcome – especially here in Cairo, where the press of humanity, traffic noise and smells of the city are so intense! There are so many layers of history here that we can only really hope to scratch the surface in the 2 weeks we’re here. Fascinating stuff! 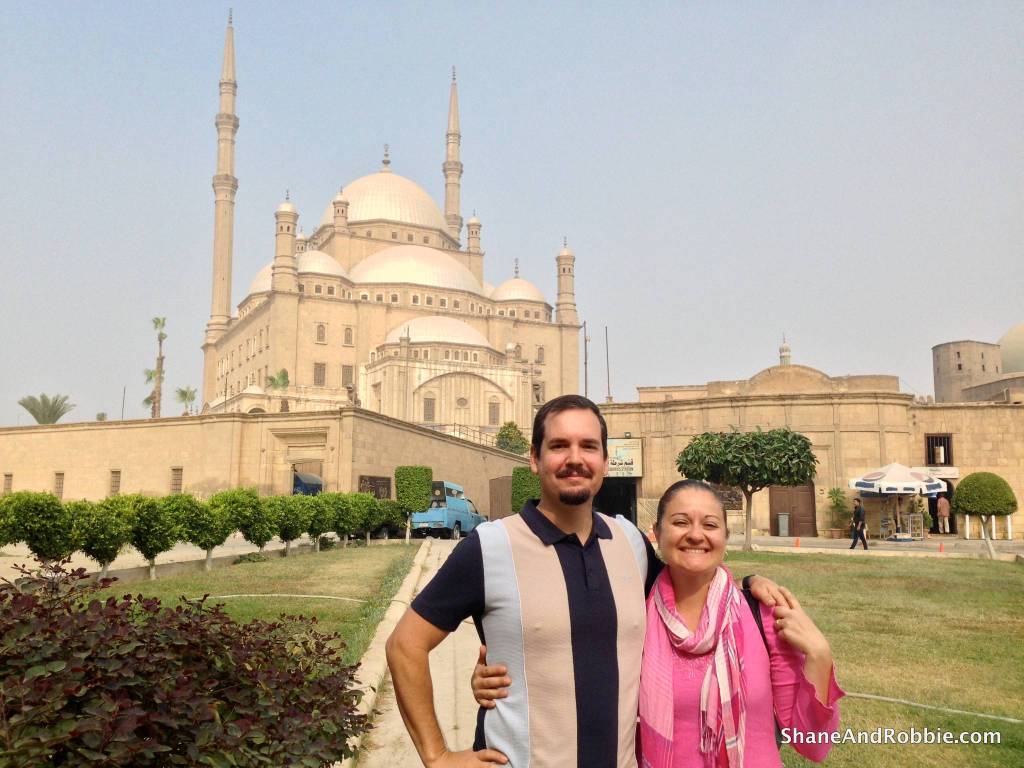 Fascinated by all this history!