Mt Fuji finally revealed itself to us! We woke this morning to this view: 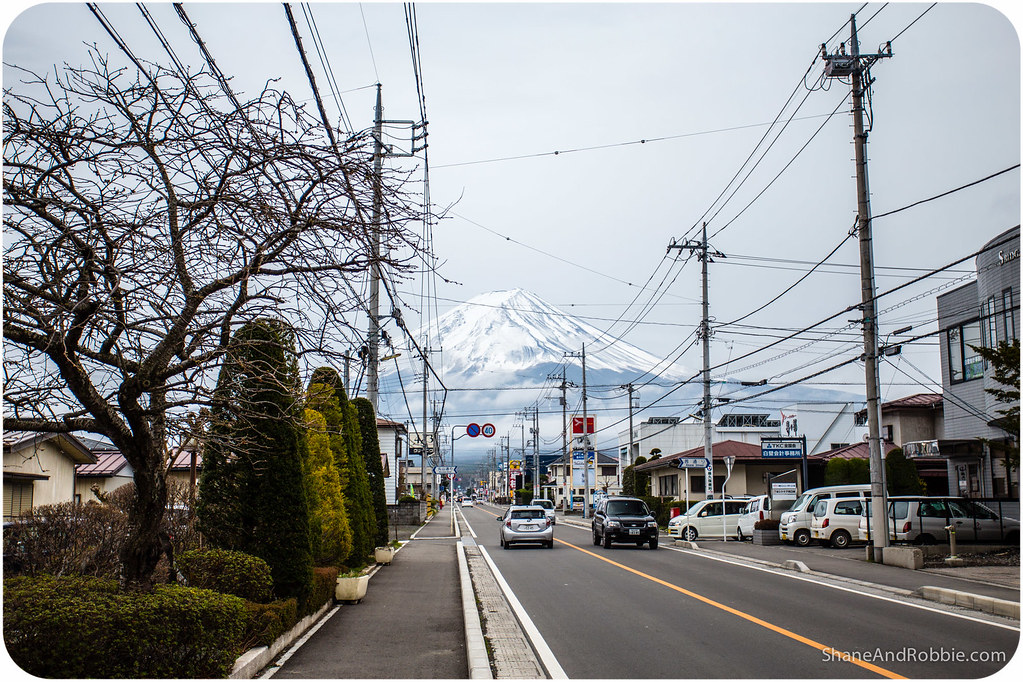 And then we went for a walk down to Lake Kawaguchi and saw this: 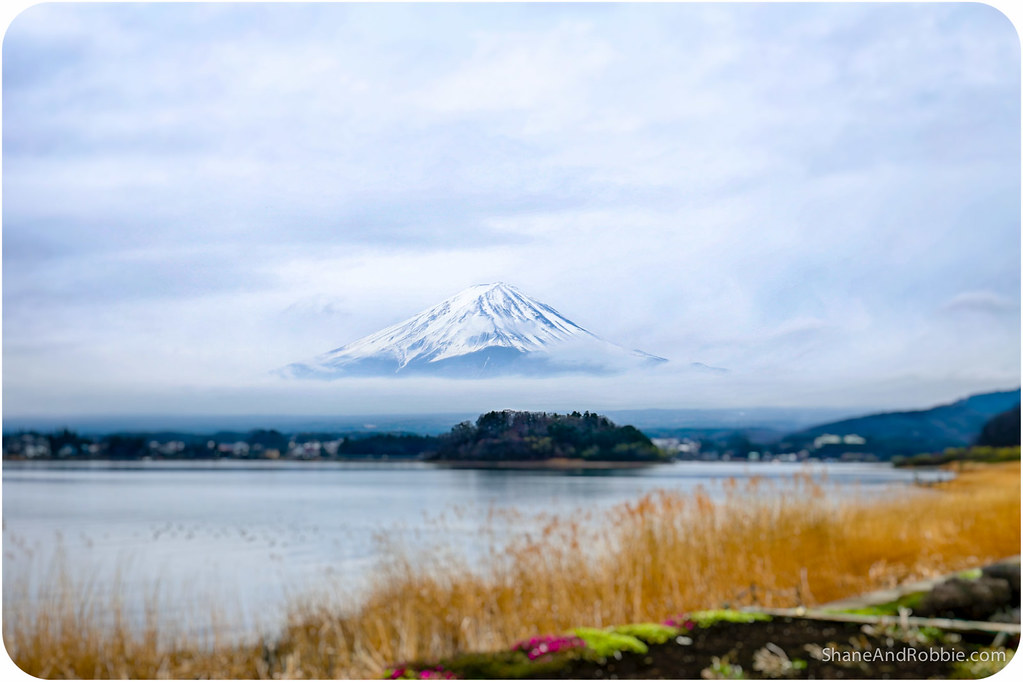 Oh, and then we went up Mt Kachi-Kachi via the “ropeway” (i.e. cable car) and saw this: 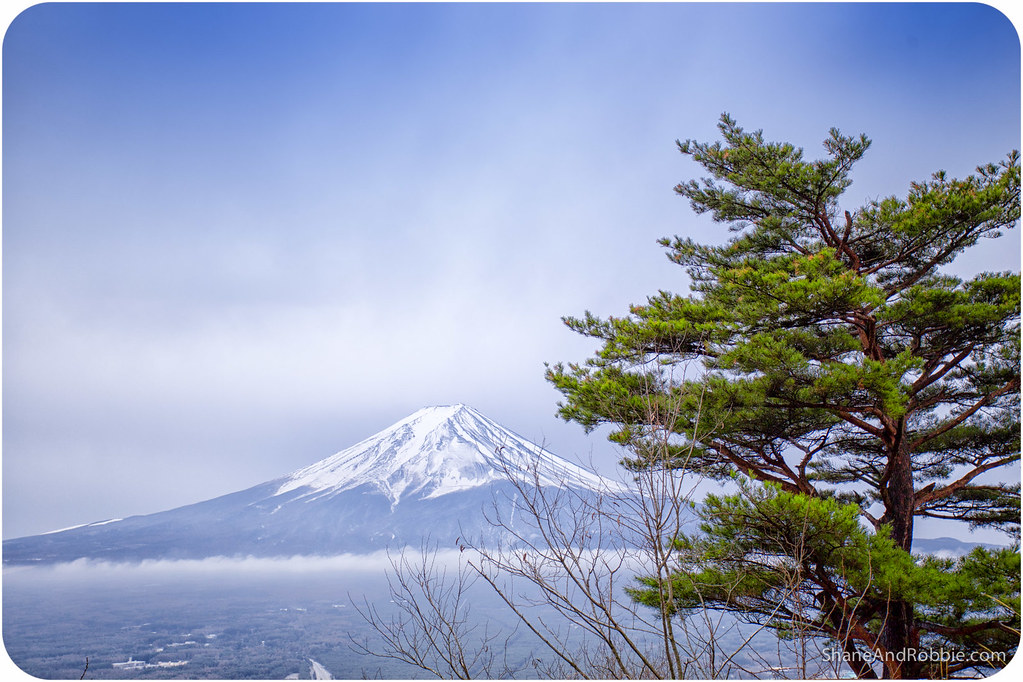 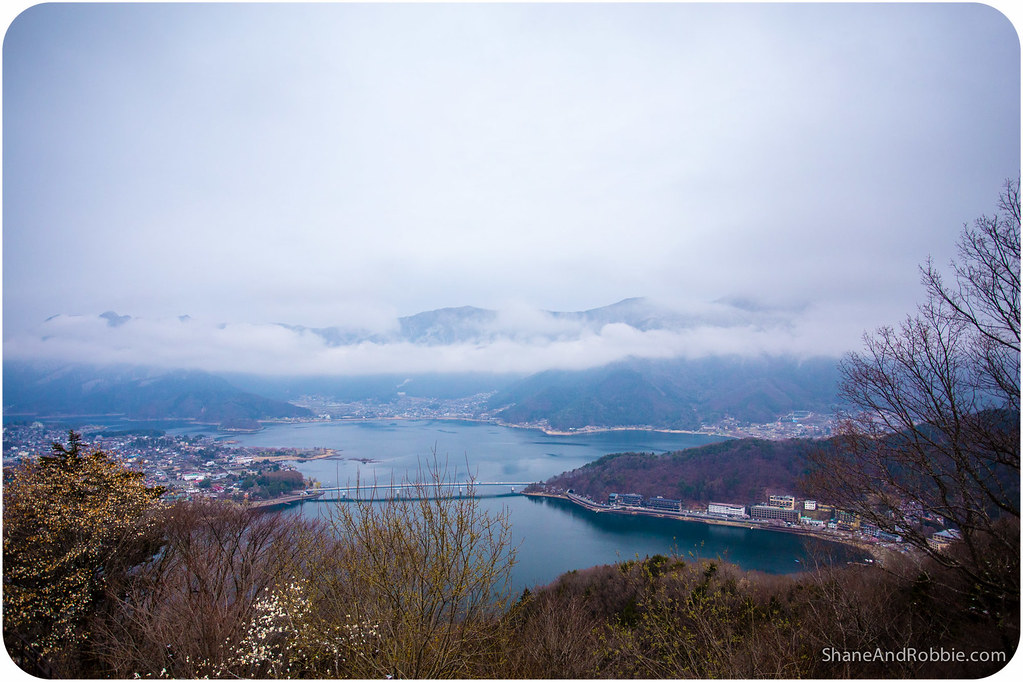 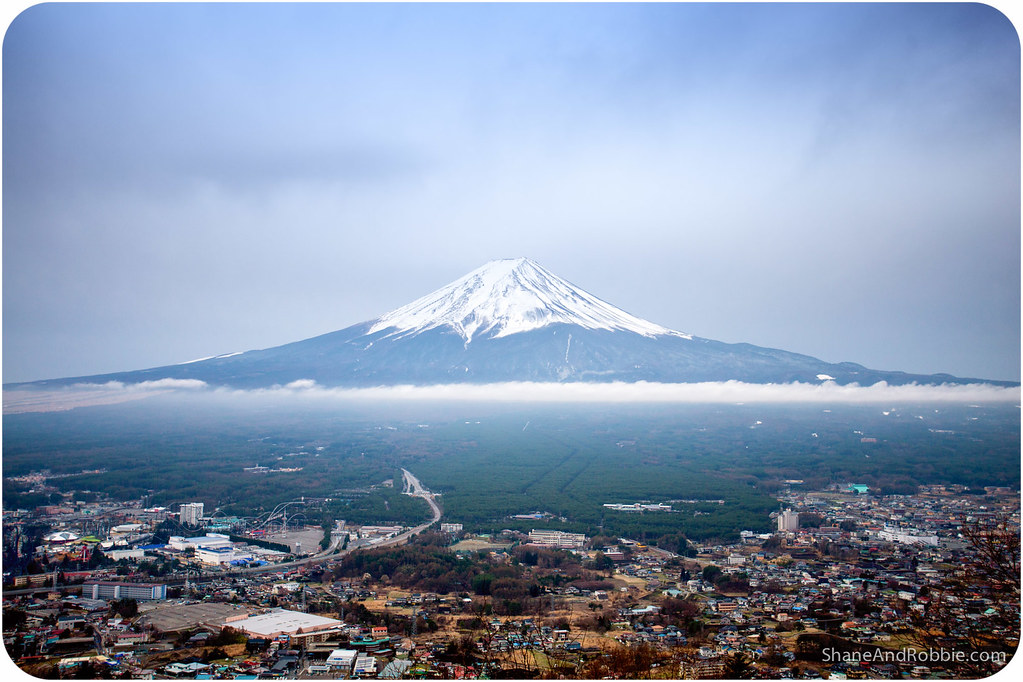 How happy were we? This happy: 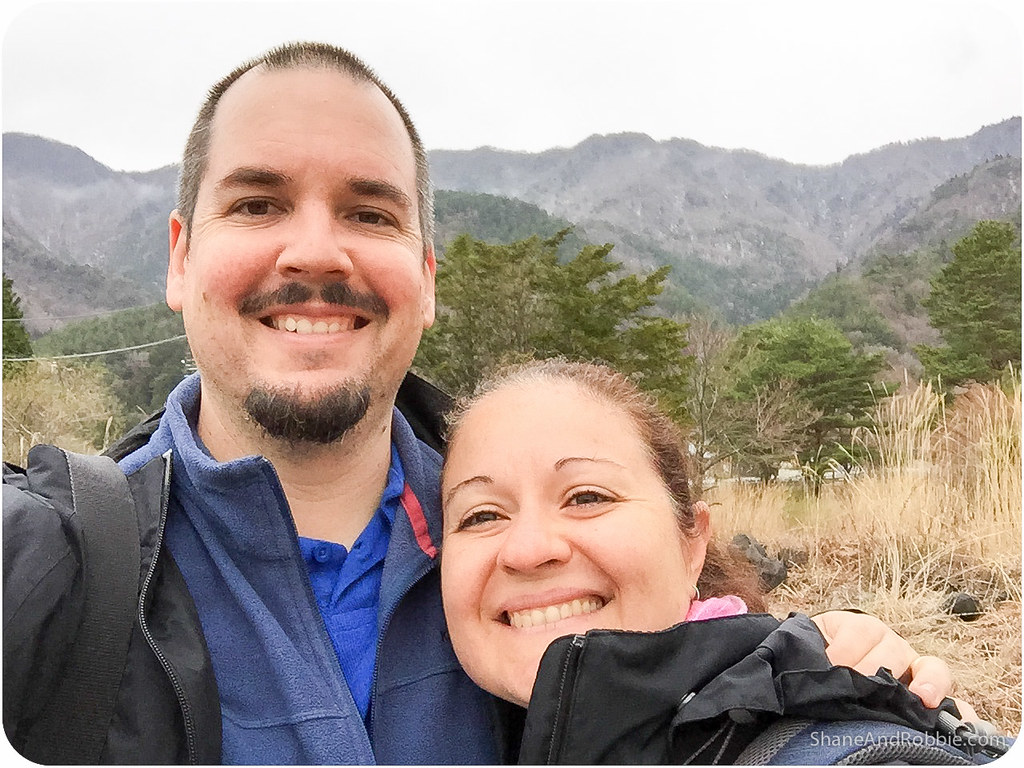 Finally: Fujisan in all its glory! Why all the excitement? Well, because Mt Fuji is so iconically Japanese that it seemed a pity to come all this and not see the mountain! At 3,776m high, Fujisan is Japan’s tallest peak and has been worshipped for millennia as a sacred mountain. It’s nearly perfect conical shape has also made it a focal point for thousands of Japanese artists, poets and story-tellers. So important is Fujisan in Japanese folklore and mythology that it is a UNESCO World Heritage Site. In recent years it has also become a major attraction for snap-happy tourists. The volcano is still considered active, though it hasn’t erupted since 1706 (there’s a happy thought – especially given we’re sleeping just a few kilometres from its base….. let’s just hope it stays quiet for a little while longer).

Having taken a few hundred photos and sated our hunger for views of Mt Fuji, we decided to head off to nearby Lake Sai for the rest of the day. We were out of town by 10:30am, just as the hordes of day-trippers from Tokyo descended*. A 45 minutes trip on a local bus and we were out of the chaos and enjoying the serenity of Kawaguchko’s smaller, quieter neighbour: Saiko.
*The irony of us, as tourists, complaining about other tourists is not lost on us. We get that we are part of the very mass of humanity that is detracting from the natural beauty of Kawaguchiko. Obviously we don’t have a problem with tourism per se (otherwise we would have to decree ourselves the ultimate hypocrites), it’s just poorly managed, mass tourism that bothers us. It’s an issue for us when you get beautiful little towns, like Fuji-kawaguchiko-machi no doubt once was, so over-run by coaches that there are bus-jams up and down every major street. When you get hundreds of seemingly disinterested people disgorged from buses for a 5 minutes photo-stop. None of them seem to care why they’re there, the significance of what they’re seeing, or even a little about the history of the place. Maybe that’s way too harsh a judgement on our part, but it’s hard not to be put off by that kind of mass tourism. 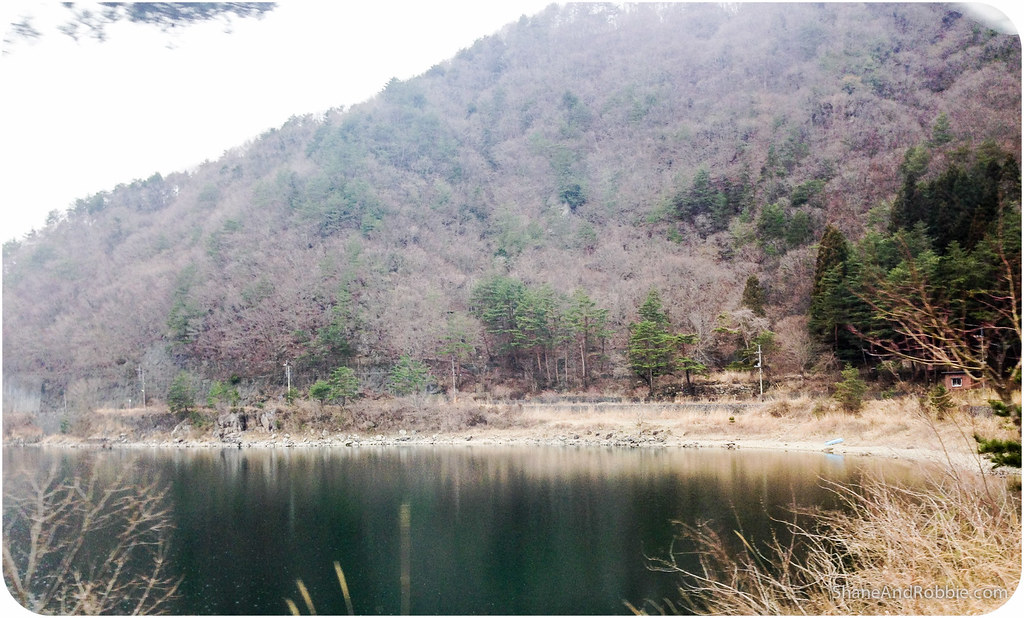 Lake Sai is much smaller than Lake Kawaguchi and far less developed. There are only half a dozen hotels spread around the lake’s 10km circumference and 3 campsites. Saiko is popular with families during the summer, keen to go camping, canoeing and fishing. It’s off the main tourist trail but is serviced by local buses that, for just a few hundred yen, took us to the Japan we know and love!

Along the Western shore of Saiko is Aokighara Forest, a verdant sea of trees that we thought would be perfect for a day hike and picnic lunch. Little did we know that this is also known as “Suicide Forest”. It wasn’t until we got to the edges of the trees that we saw a sign in Japanese urging suicidal visitors not to kill themselves that we realised where we were. We’ve heard about Japan’s famous “Suicide Forest”, where, over the centuries, hundreds (if not thousands) of people have gone to kill themselves. We just didn’t realise it was this forest! 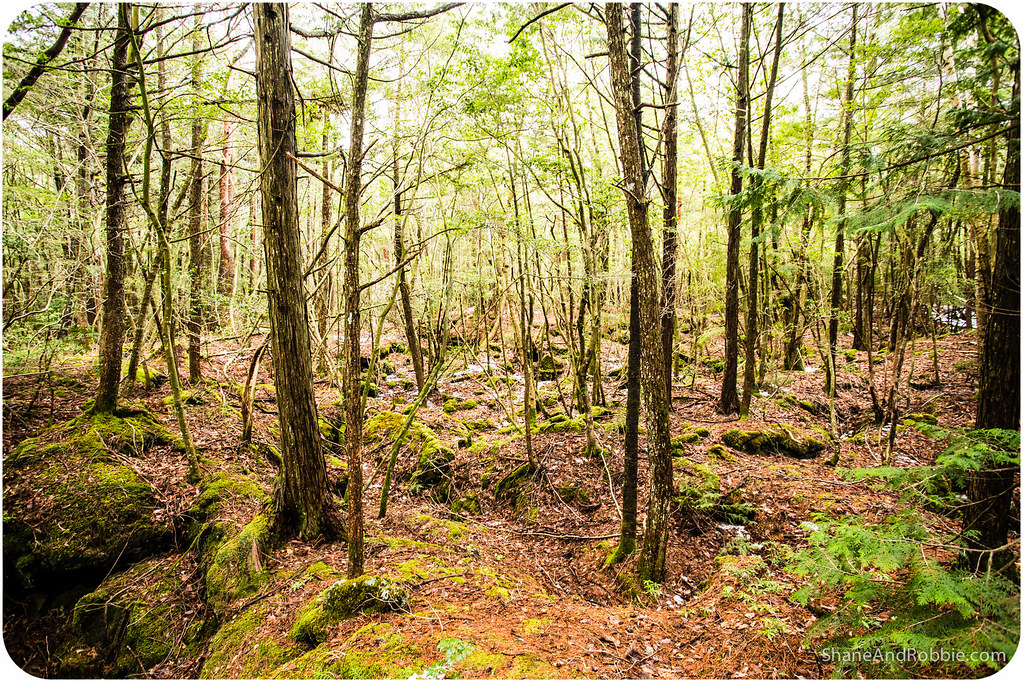 In Japanese folklore Aokighara was said to be home to numerous demons, and during times of famine it is believed that older members of local families would walk themselves into the forest to die, in order to spare their families the burden of having to feed them. This morbid legacy resulted in to Aokighara featuring in the 1960 novel Kuroi Juaki (i.e. Black Sea of Trees) by Japanese author Seicho Matsumoto, as the setting for a dark murder mystery. Since the novel’s publication there have been almost 500 confirmed suicide victims found within Aokighara, and the spirits of all these poor souls are said to haunt the forest. A sinister back-story, to be sure. Fortunately we experienced no ill effects from walking under its eaves, just lots of natural beauty, peace and quiet. 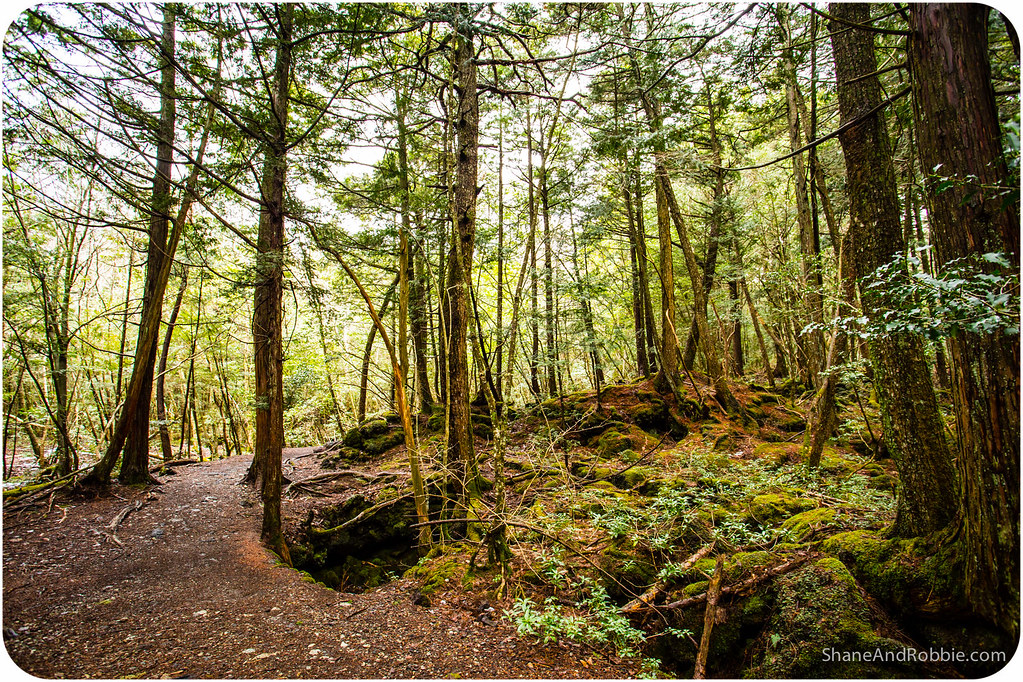 The 3,500 hectare forest is very densely wooded and, due to the wind- and sun-blocking effects of the trees, is known to be unnervingly quiet and dark. We certainly appreciated the serenity today, however we stayed on the marked path and did not stray into the dense woodland, thus avoiding the risk of stumbling across any unfortunate suicidees. 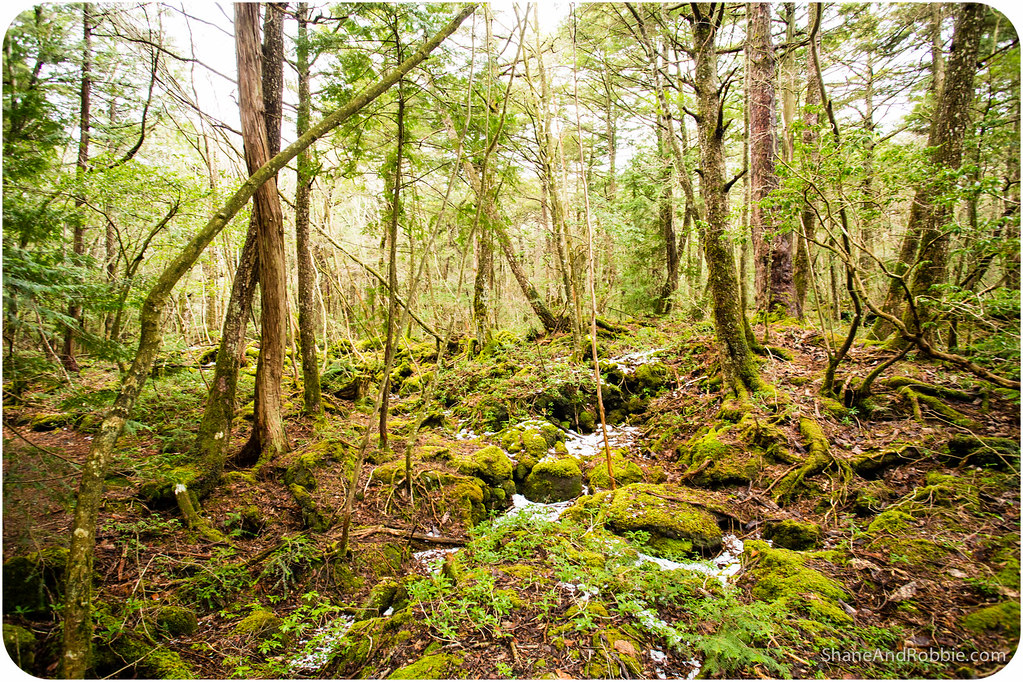 The forest floor within Aokighara consists primarily of volcanic rock and is peppered with caves, many of which were clearly visible from the path. All around us was a carpet of green moss and above us a canopy of evergreens and freshly sprouted deciduous growth. Despite its sinister legacy, we really enjoyed our walk through Aokighara Forest and feel truly blessed to have been able to experience its beauty. 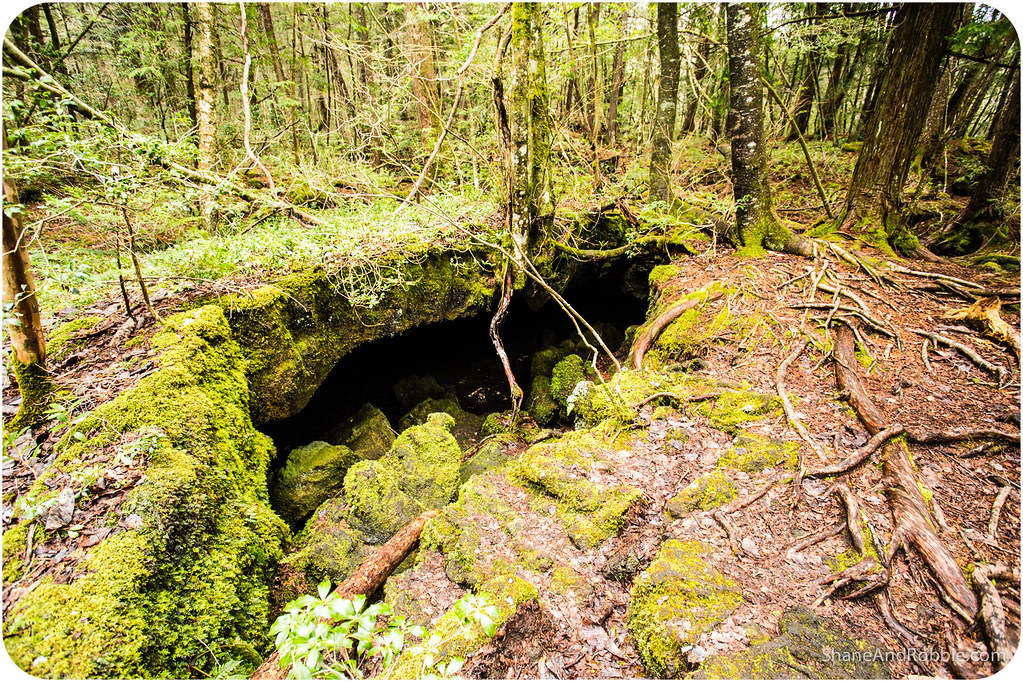 Fujisan has gone behind its cloak of clouds for the evening so we also feel very grateful to have seen it before our departure tomorrow for Nara. Catch you then blog fans! 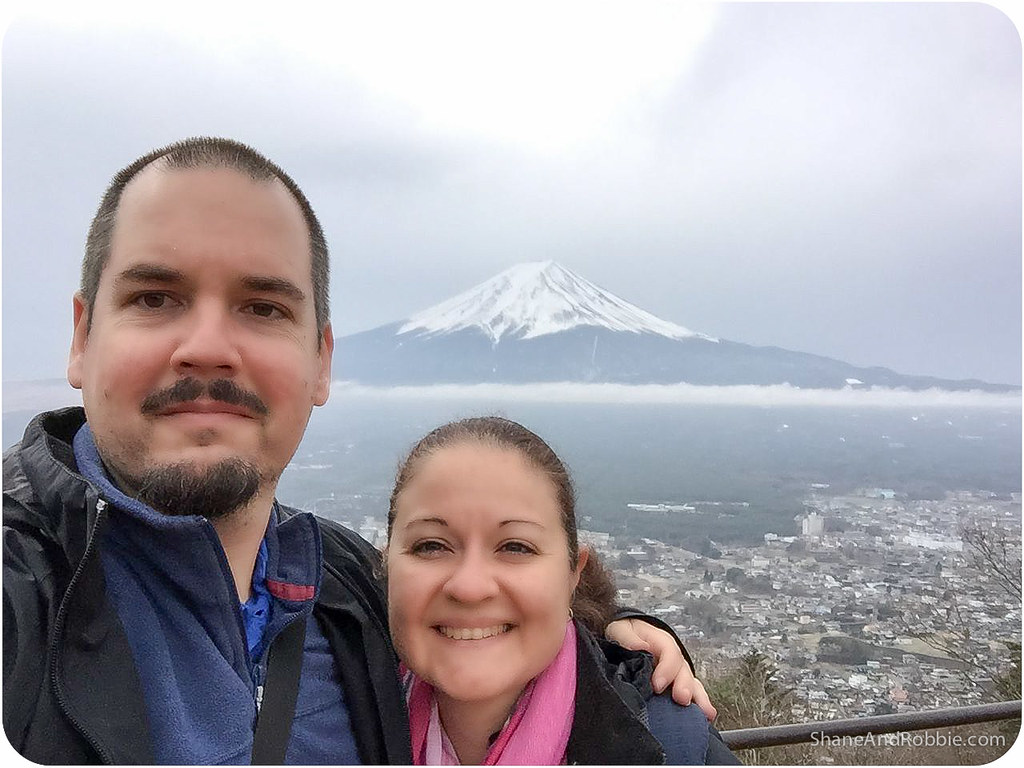