VIEWS OVER TOKUSHIMA FROM EYEBROW MOUNTAIN

Leaving Takamatsu behind, we caught the train to our next destination today: Tokushima. This is another of Shikoku’s urban centres and our base for the next couple of days. It’s a really cute little city, built along the Yoshino River, with Mt Bizan* as a central focus. At 280m high, Mt Bizan is one of Japan’s smaller peaks, but it’s still the highest point in town, making it a great vantage point from which to enjoy views over Shikoku.
*The Japanese kanji for bizan means “eyebrow”. An unusual name for a mountain, but apparently based on the fact that the mountain looks like an eyebrow. Not quite sure what angle you have to see it from to get the eyebrow reference, but there you go. 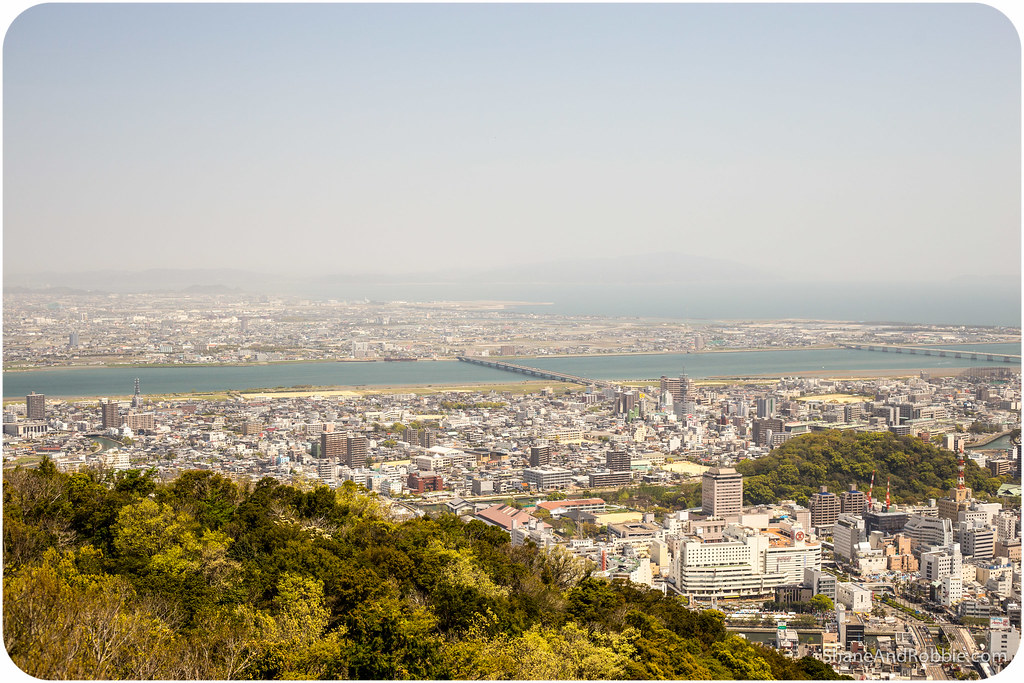 As our train pulled out of Takamatsu this morning and we headed clockwise around Shikoku the scenery around us changed from urban and industrial, to more and more rural. The Eastern part of Shikoku, where we are now, is built along a river valley carved out by the Yoshino River. The area’s mild climate and rich alluvial soil makes it perfect for agriculture, hence the kilometres of farmland we passed through today. 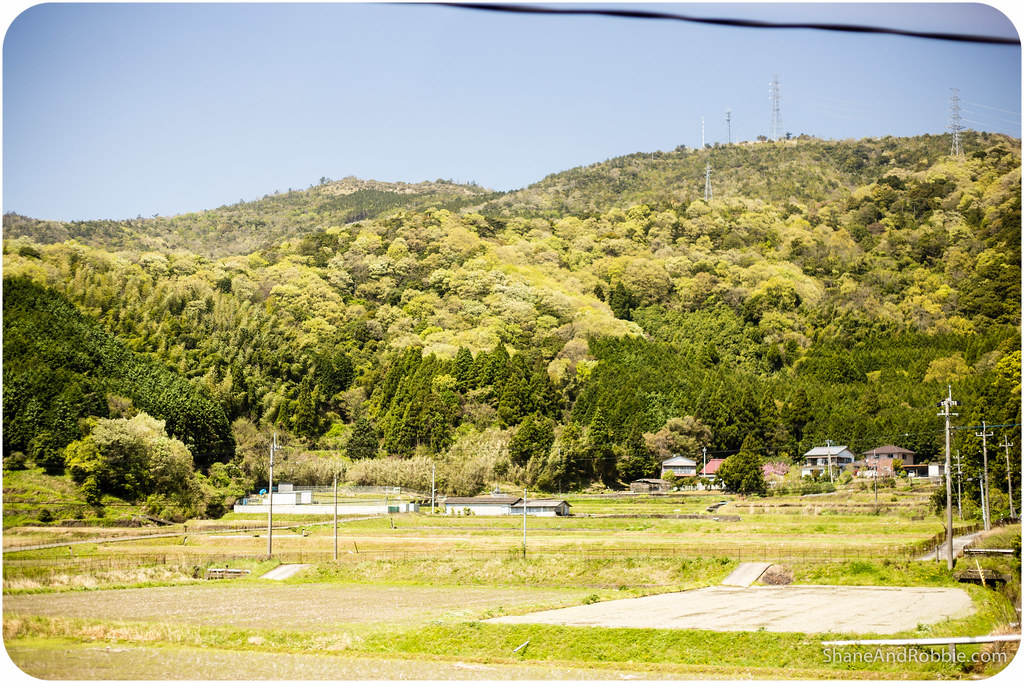 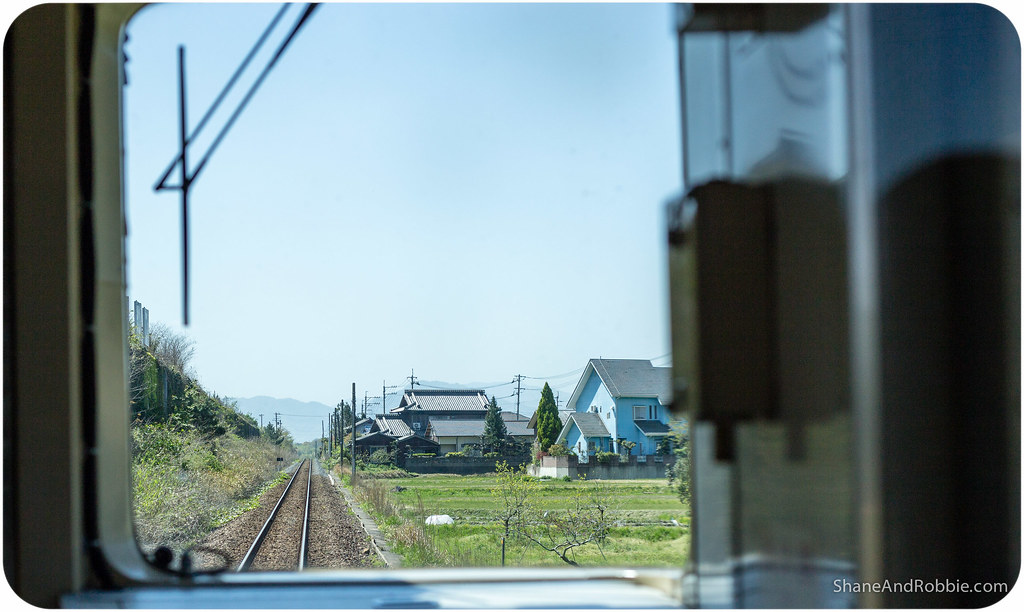 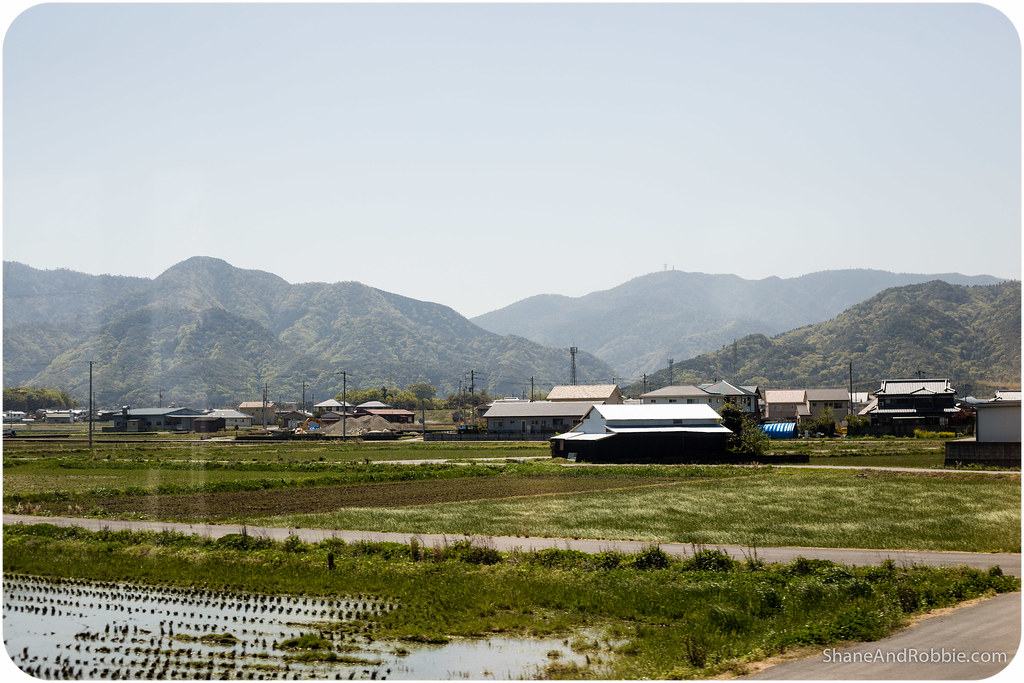 Tokushima city (population 260,000) is the capital of this prefecture, and has been so for more than 500 years. The foundation for the present-day urban area was laid in 1587, when Iemasa Hachisuka, a feudal lord, built his castle here and claimed the land. Under the rule of the consecutive 14 generations of the Hachisuka family, Tokushima prospered as an administrative and economic center. The Hachisuka Clan and their castle are long gone, but the thriving city remains. 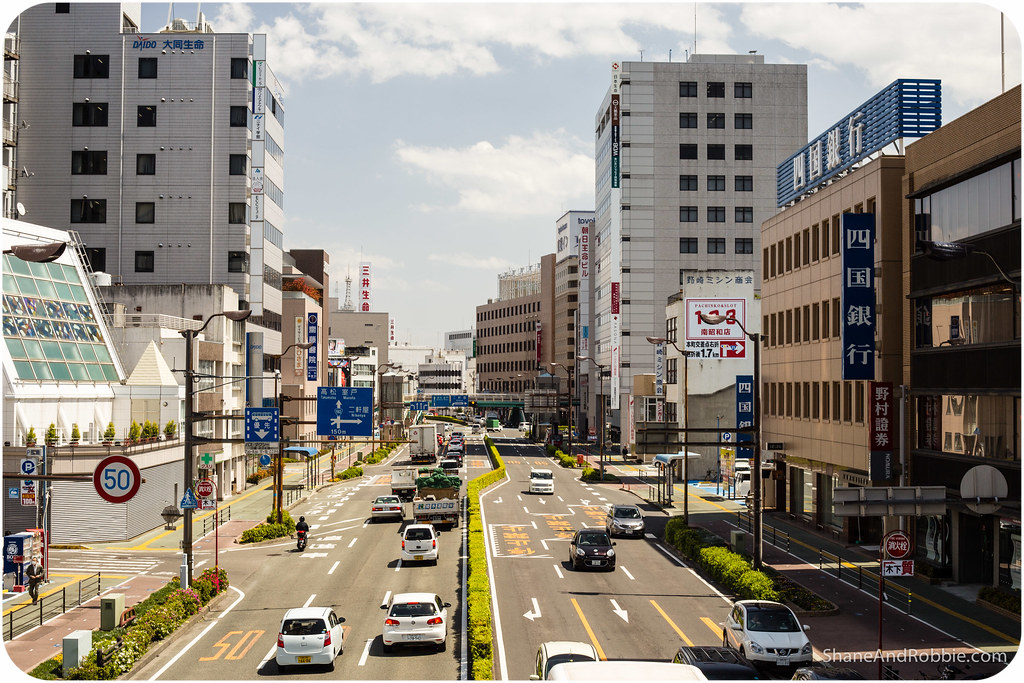 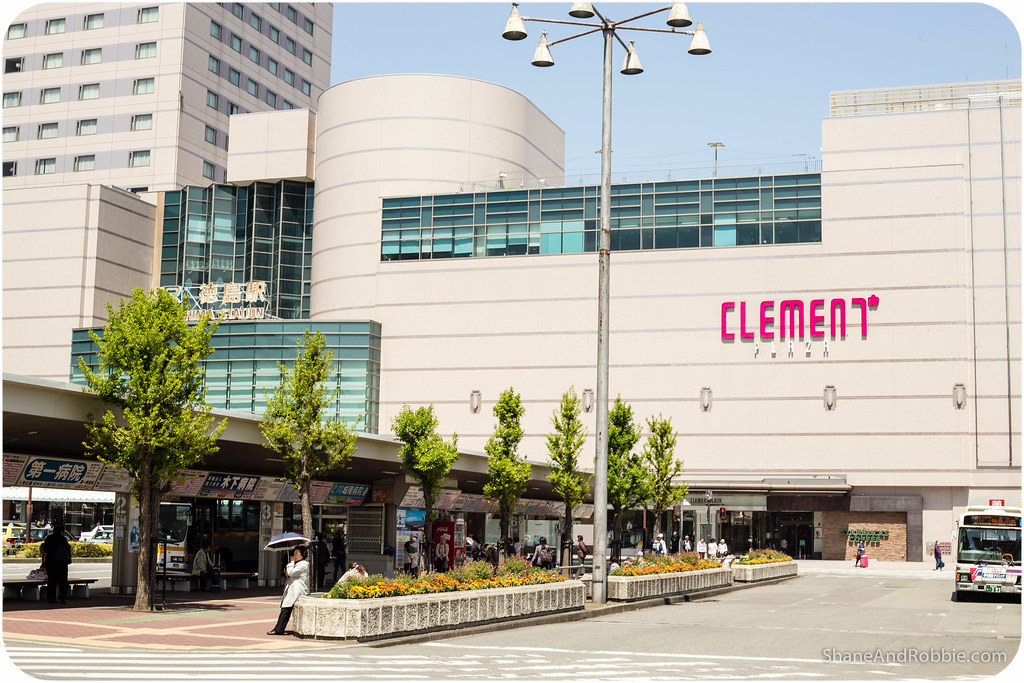 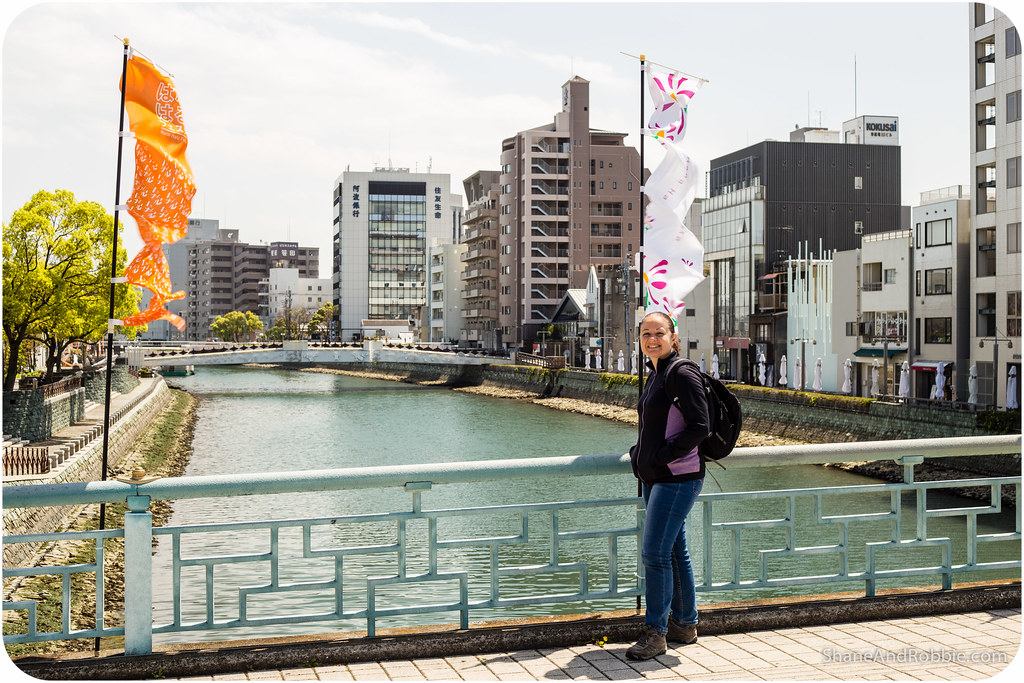 Tokushima is best known today for its eyebrow mountain and as the starting point for the Shikoku Pilgrimage, with the first 15 temples of the journey being within a few kilometres of the city. As wonderful as the temples around here no doubt are, we’ve had our fill of temples for a while and instead of hiking around the local scared sites, decided instead to check out the city and Mt Bizan instead.

There is a ropeway (i.e. cable car) that runs up to the top of Mt Bizan, allowing for easy access to the awesome views. Unfortunately for us there were 60km/h winds whipping around town today and so they shut the cable car down. 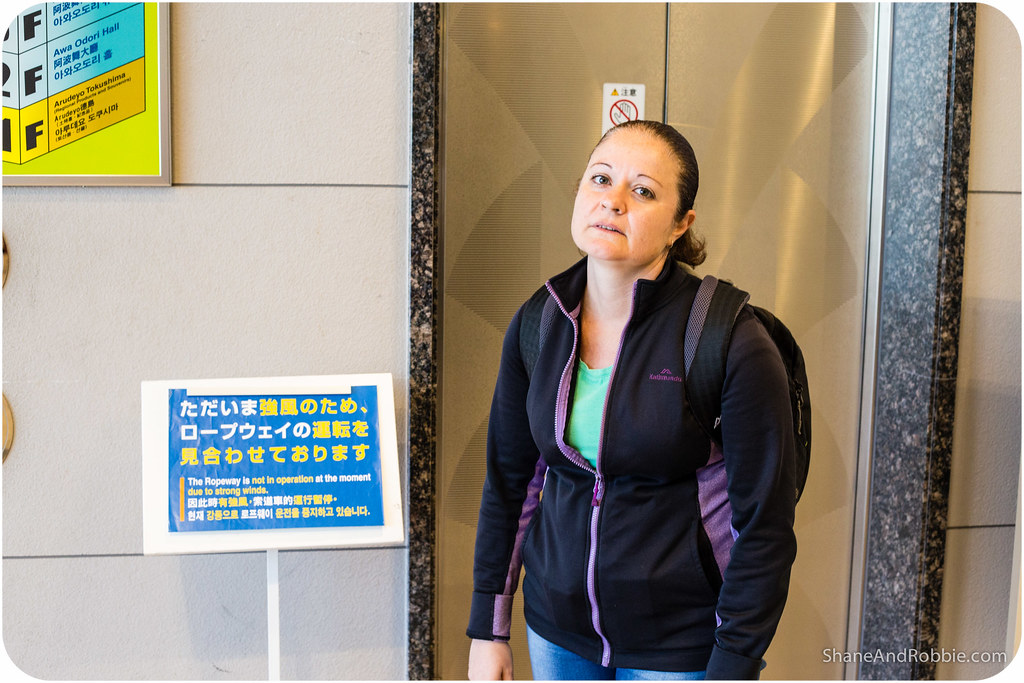 Not be deterred we decided to hike up the mountain instead – it’s only 280m up, how bad can it be? Well….., let’s just say the path that leads up to Mt Bizan is clearly not the path most trodden. It was seriously overgrown and mossy, with a thick bed of leaves underfoot most of the way. Some of the footing was quite treacherous, and is soon became obvious why most people take the ropeway: it was soooo steep! Seems our favourite direction is turning out to be UP. 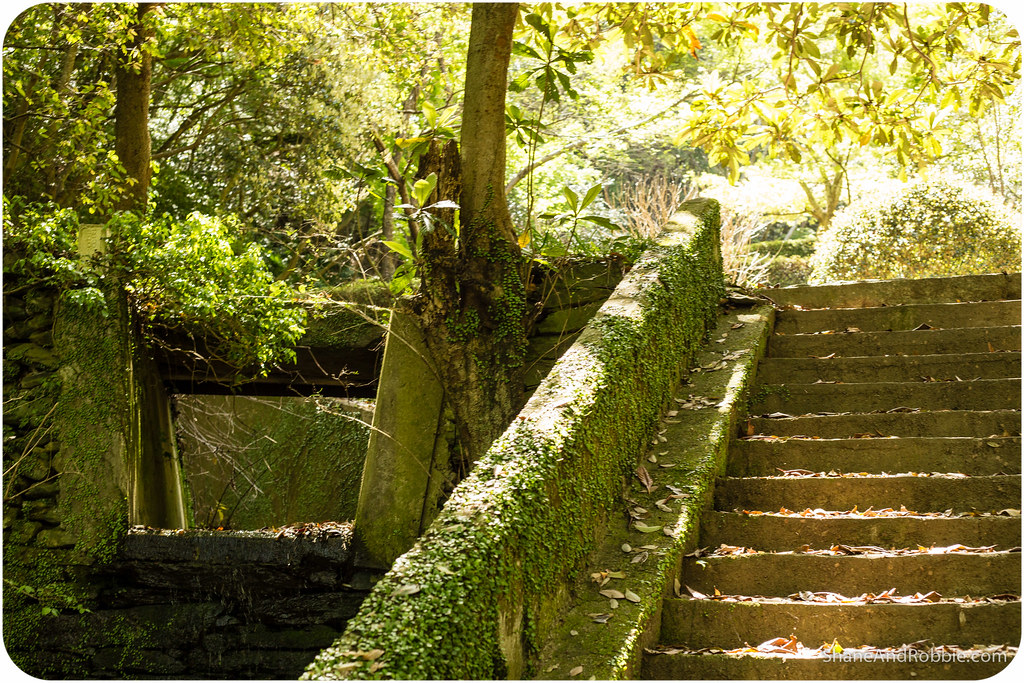 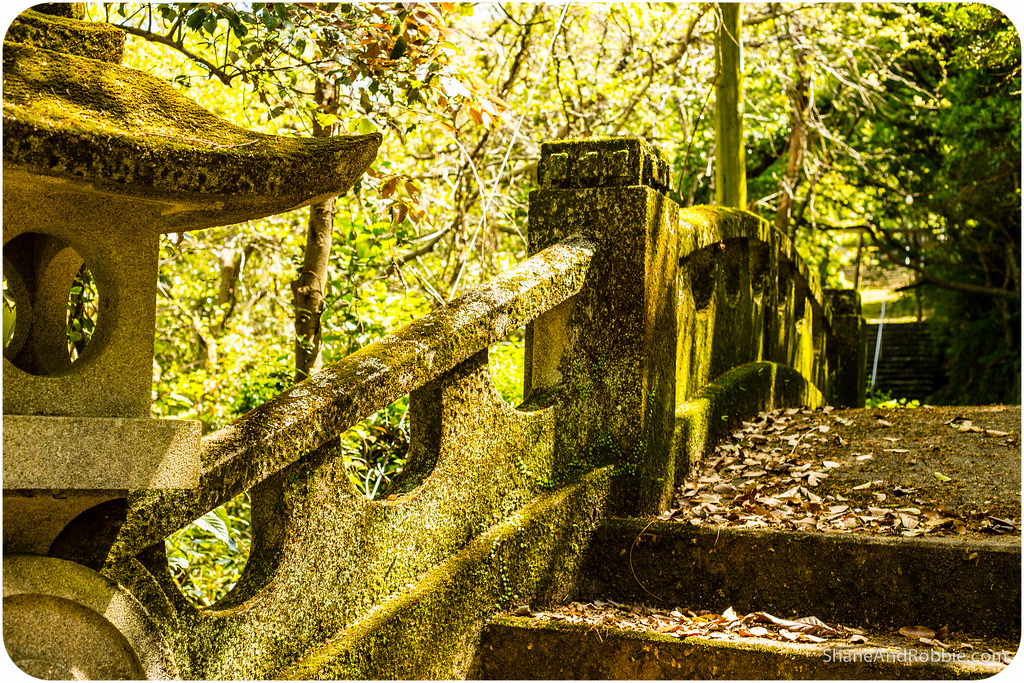 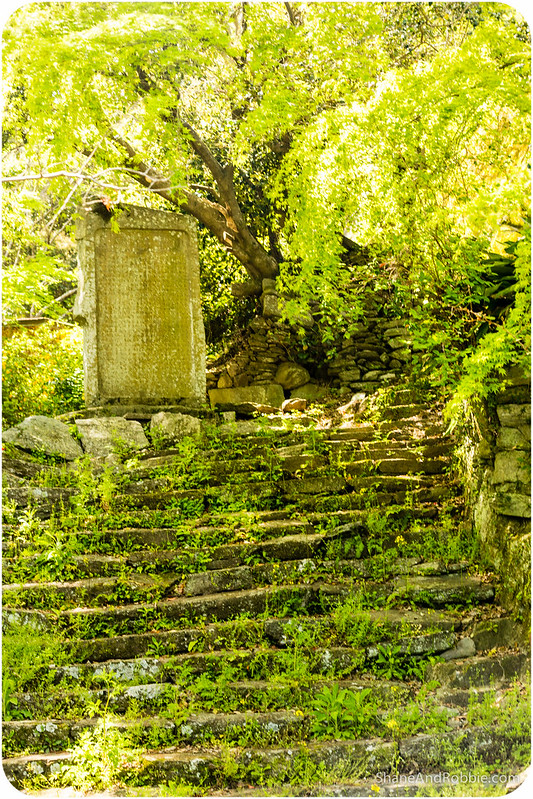 Again, make the effort and Japan will reward you however. The lush green of the forest around us was mesmerising, and we even saw the occasional late blooming cherry tree. These are definitely the last sakura blossoms for the season down here – most of the trees are already in their full summer regalia. 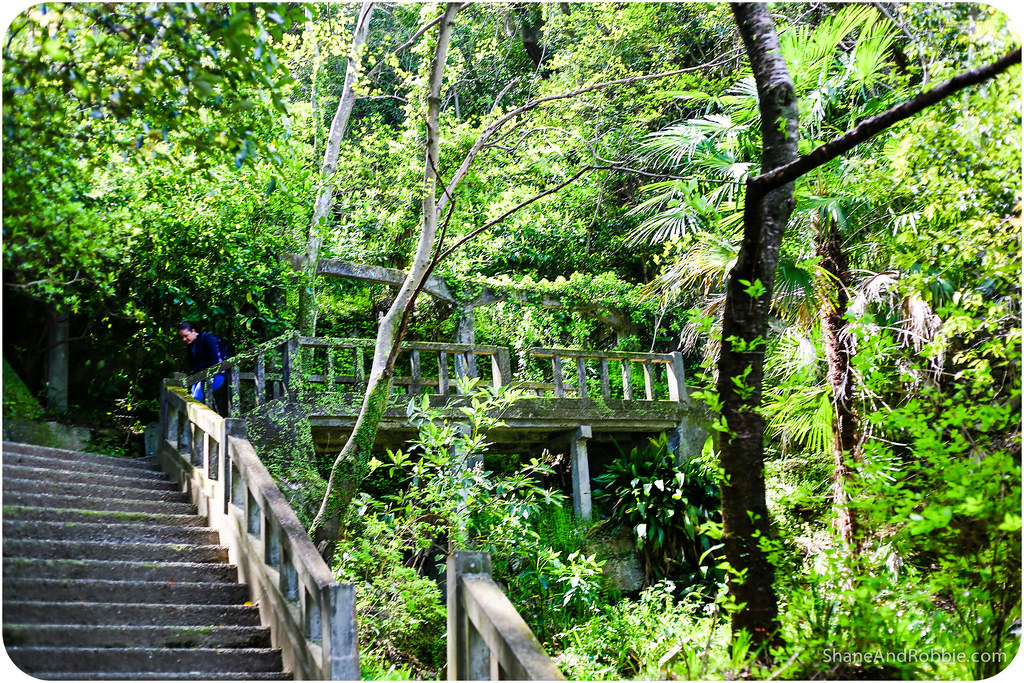 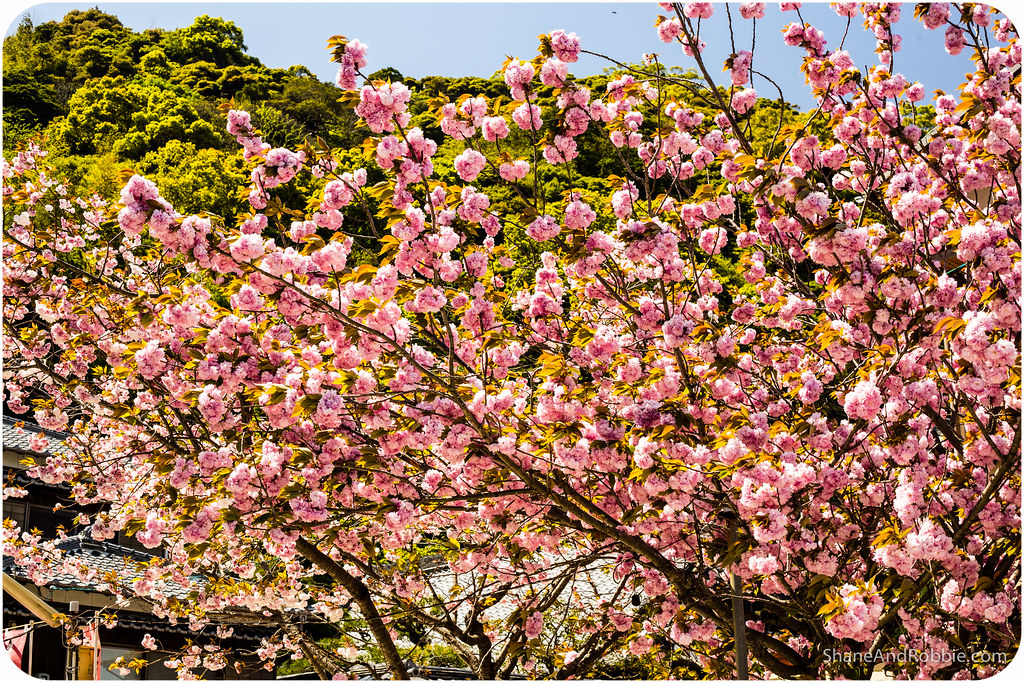 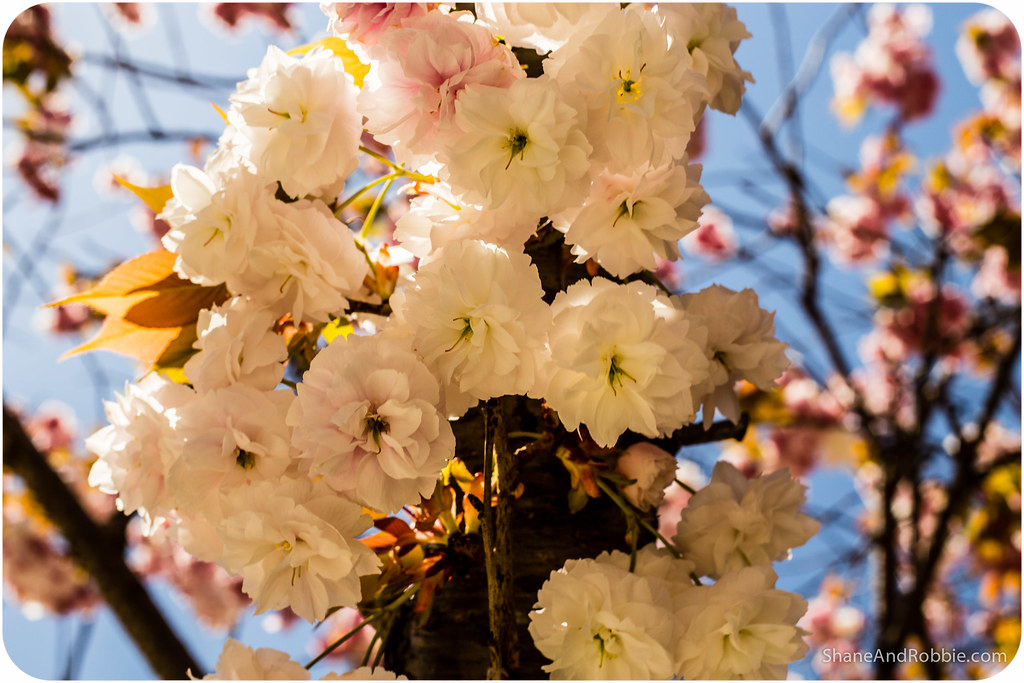 We saw lots of little shrines along the way, most beside natural springs . These springs have been a feature of Mt Bizan for centuries, with historical records showing people used to come from miles around to collect water from these natural aquifers. 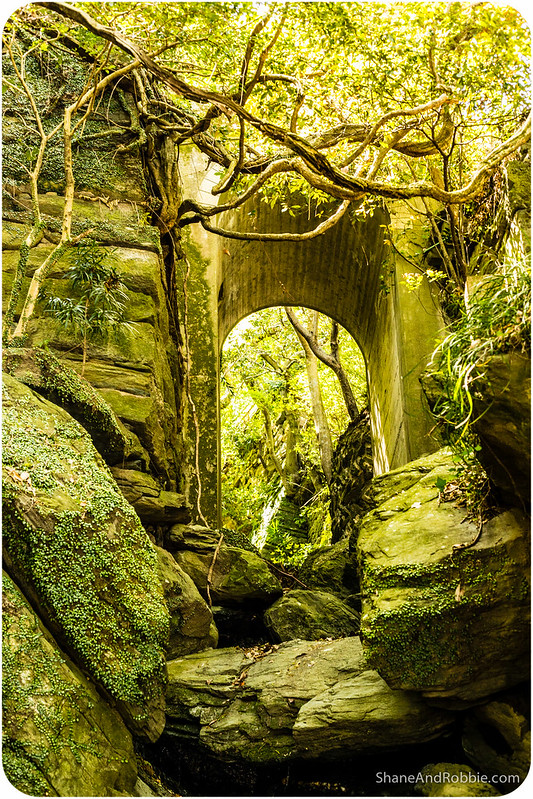 When we eventually reached the top the views across Tokushima and the surrounding area was pretty awesome. And even better, as the winds had died down a bit they had reopened the ropeway! It was a MUCH easier trip down! 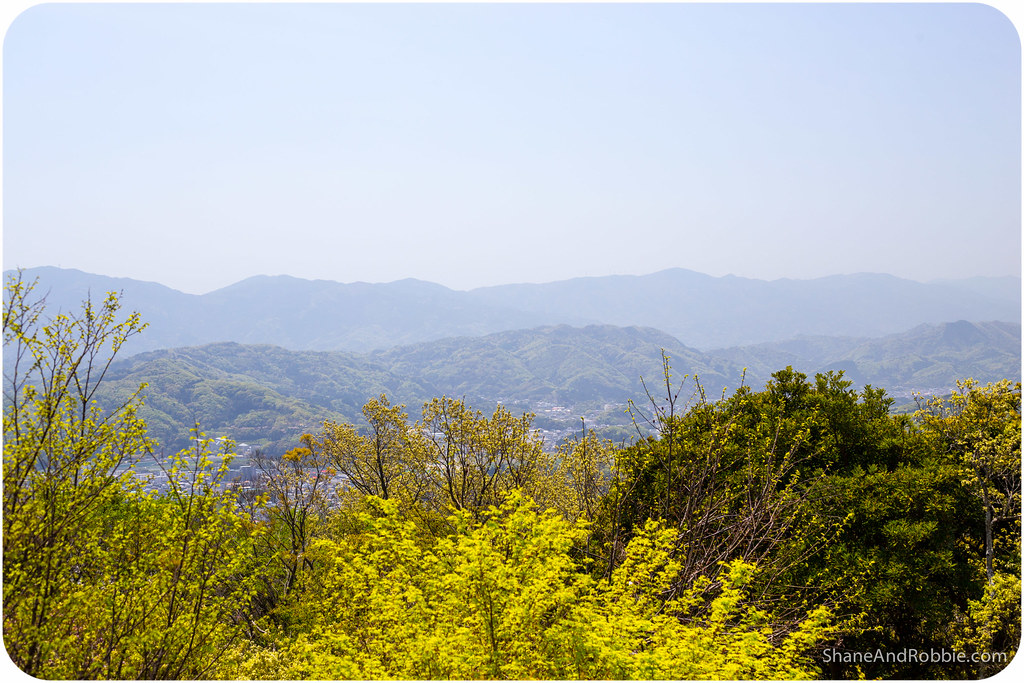 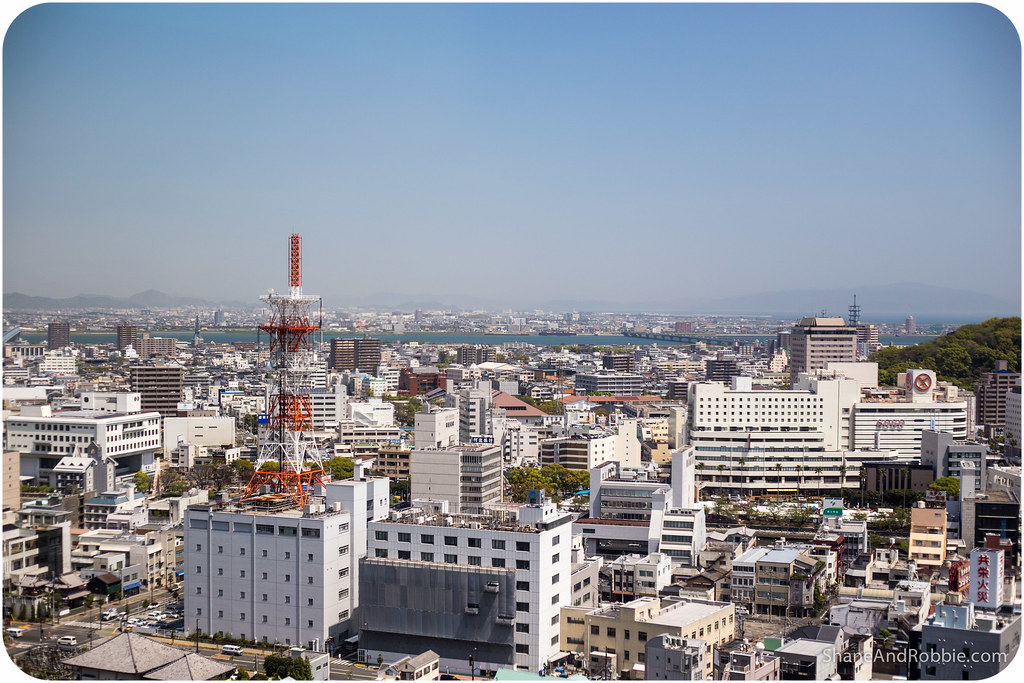 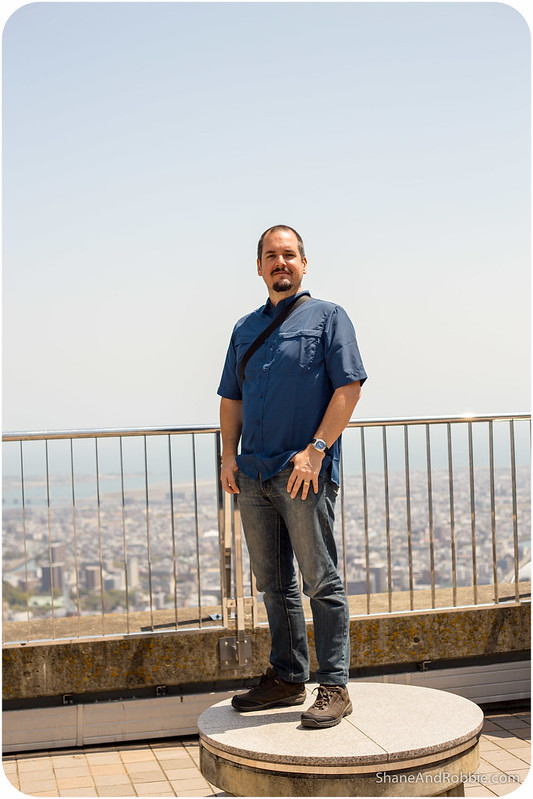 After our strenuous afternoon’s hike (an unplanned and unwanted hike), we were starving and headed out to a Japanese curry house for dinner. Unlike most Japanese dishes, which are often presented like a piece of art, curry is not a pretty dish. Just a big dish of rice, some kind of meat and a ladle-full of soupy curry sauce*. Hearty and warming, and oh so delicious. A perfect end to a great day! Tune in tomorrow for more updates from us, as we explore more of Shikoku.
*Japanese curry is not a native dish – it’s been imported from Britain and is based simply on chicken/beef stock, curry powder and a few other basic ingredients. It’s not very spicy and certainly not haute cuisine, but man is it tasty! 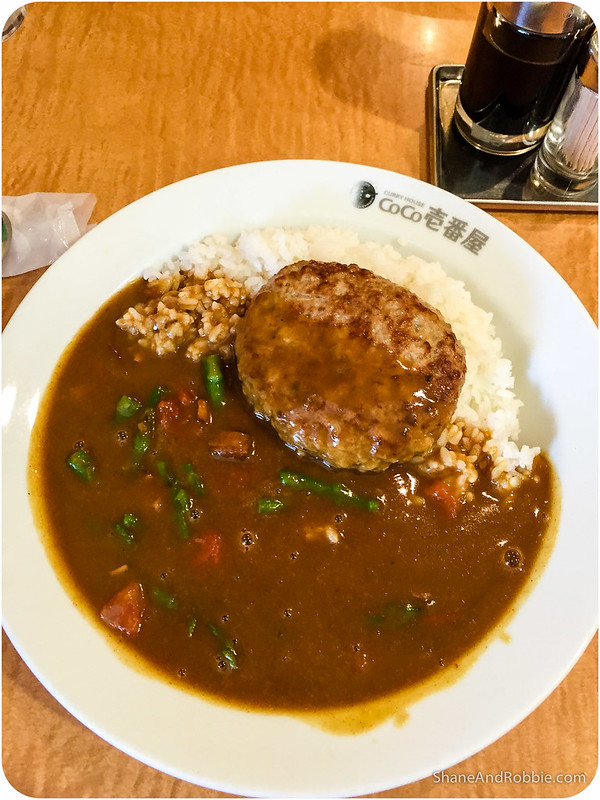