HONG KONG’S FABULOUS TIN HAU FESTIVAL
Tin Hau is the Goddess of the Sea and the equivalent of Hong Kong’s Buddhist “patron saint”. Serendipitously today happens to be Tin Hau’s birthday and, since we’re here, we thought we’d join in the celebrations for this heavenly empress’s eponymous festival. The street parade of dragons, lion dancers, and religious floats was fantastic and, once again, we had an awesome day of festival fun! This festival thing could definitely become a habit…

The Tin Hau Festival is one of Hong Kong’s most colourful celebrations and is celebrated at all the various temples dedicated to this goddess. Many of the celebrations are quite low key and sombre; in the outlying village of Yuen Long, however, we were told, the festivities are quite something. We love a good festival, so we caught the MTR (Hong Kong’s ultra-modern, spotlessly clean and super efficient metro system) out to Yuen Long to join in the fun. 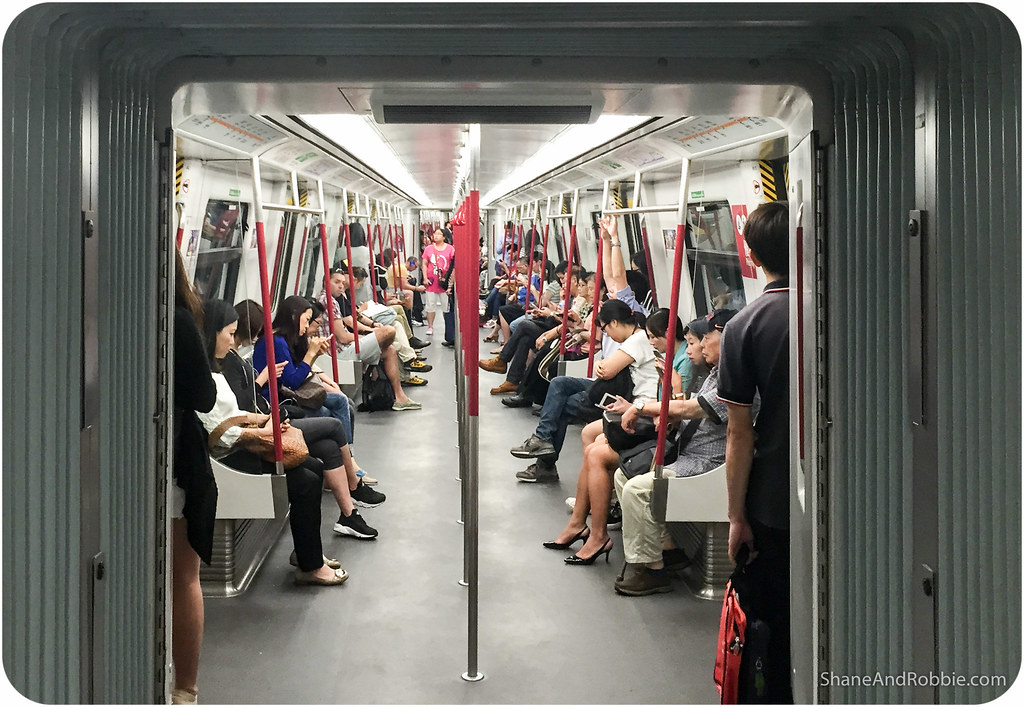 Yuen Long is a small township in the New Territories*, about an hour out of central Hong Kong. Being a fishing town Tin Hau has a strong and loyal following there. Which is why, every year on the 23rd day of the 3rd lunar month, the residents of Yuen Long have a big party in honour of Tin Hau. As we stepped off the train we could already here the deep throbbing beat of the drums and clanging of the cymbals. It didn’t take us long to find the festival.
*Hong Kong consists of 4 regions: Hong Kong Island, Kowloon, the New Territories and the Outer Islands. Hong Kong’s territory was acquired from three separate treaties: Hong Kong Island as part of the Treaty of Nanking in 1842; Kowloon with the Treaty of Beijing in 1860; and The Convention for the Extension of Hong Kong Territory in 1898 gave the UK the control of the Outer Islands and the New Territories. As of 1997, when the UK’s 99 year lease expired, Hong Kong is once again part of China. 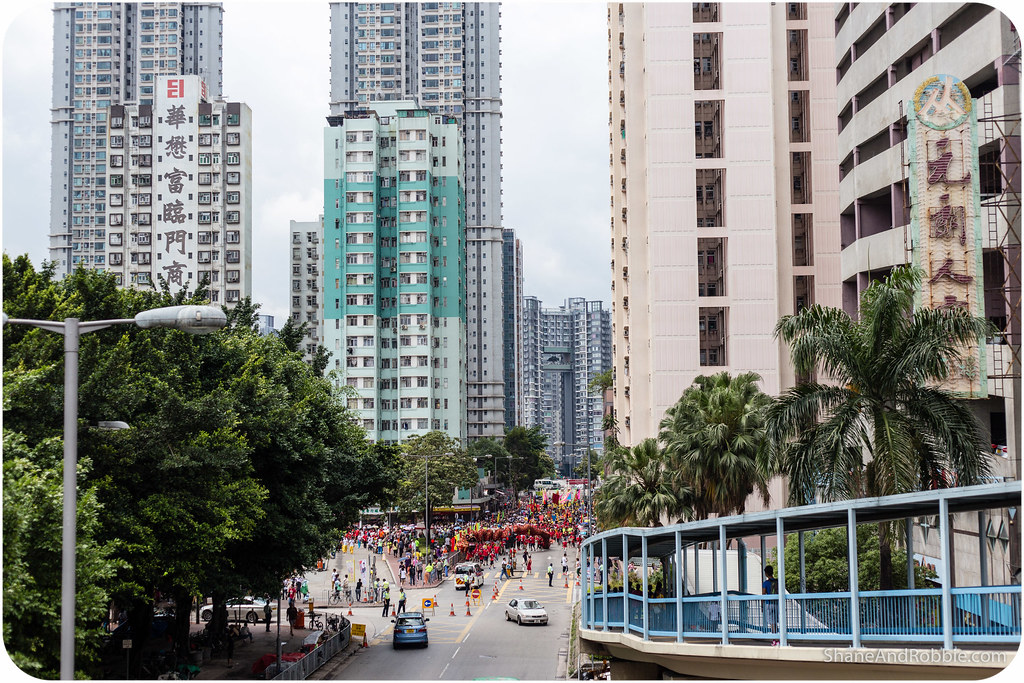 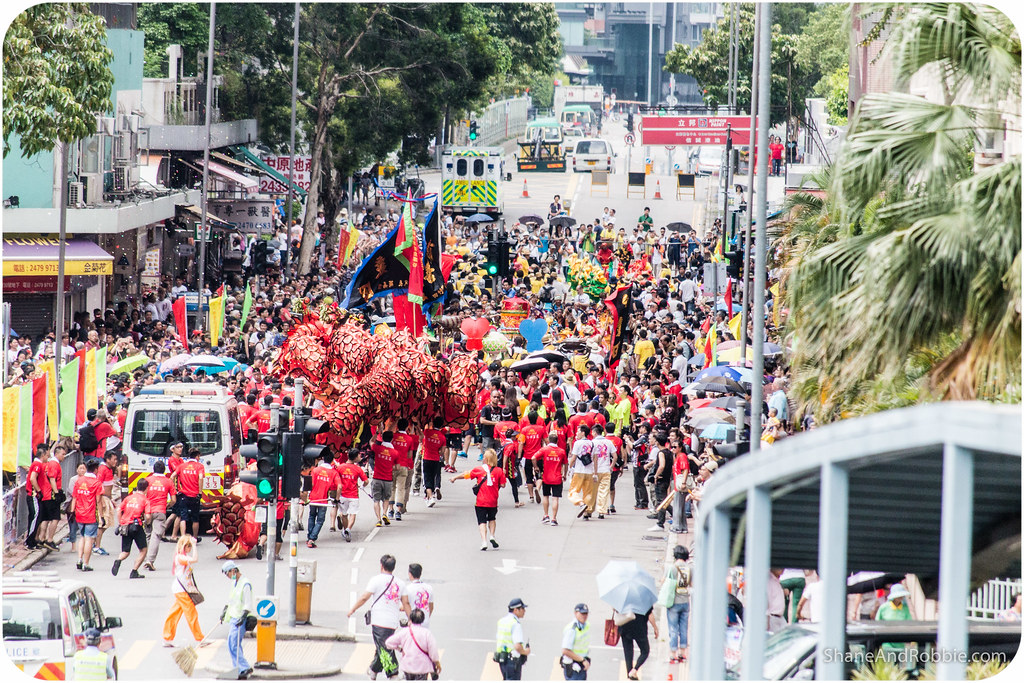 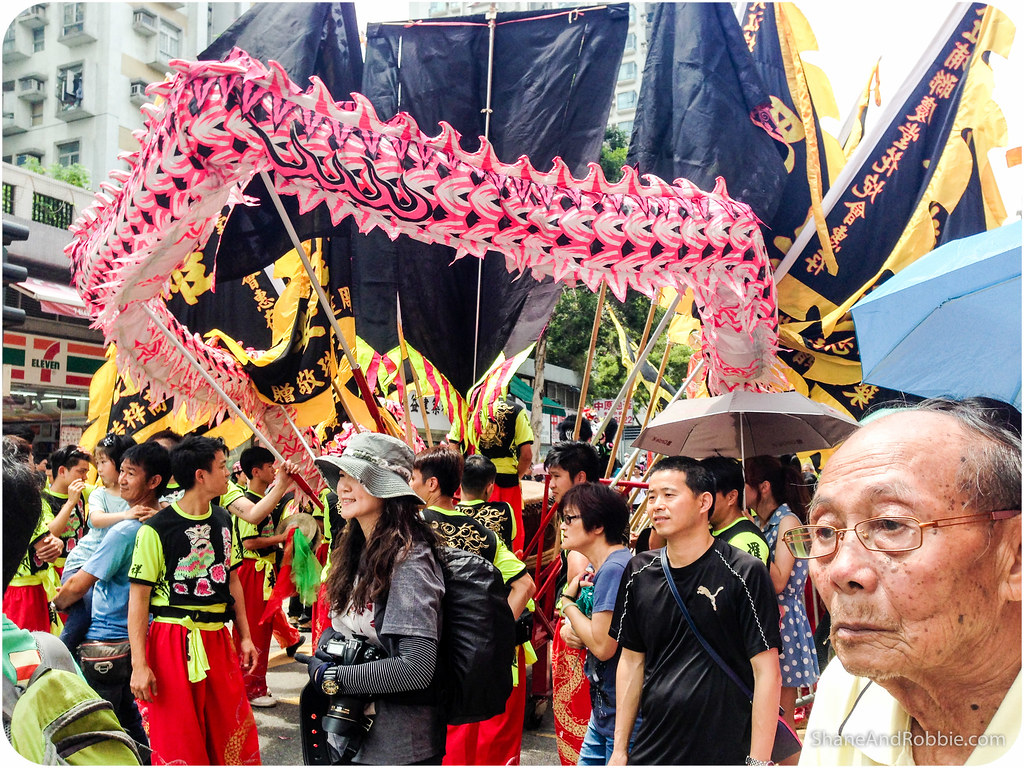 The streets were a riot of colour, with many different troupes doing traditional lion and dragon dances, marching bands, and lots of flags being waved. 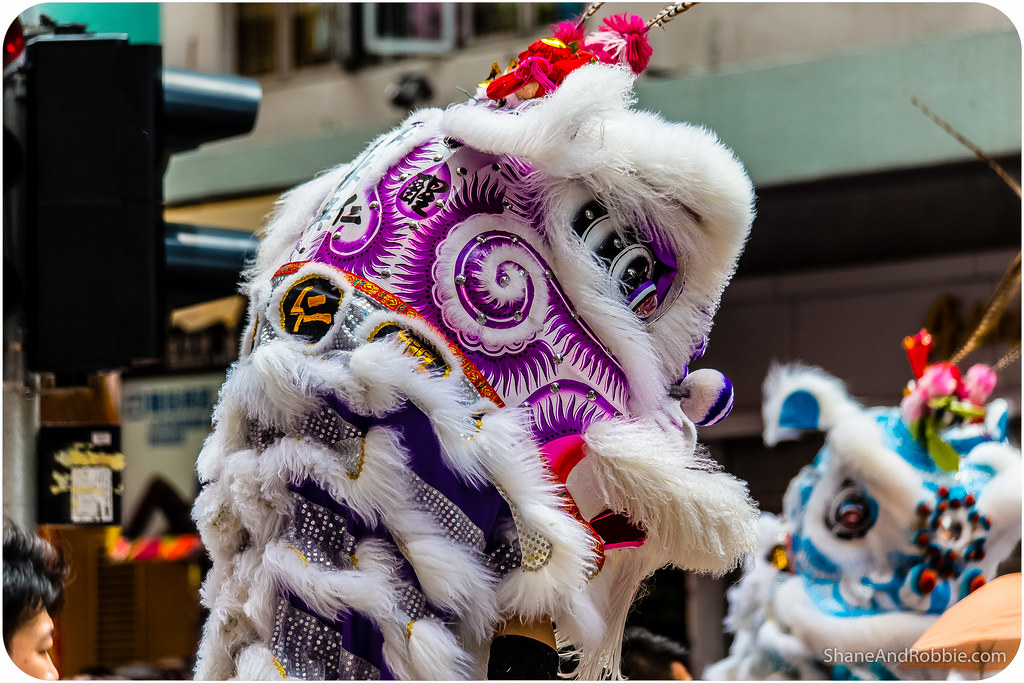 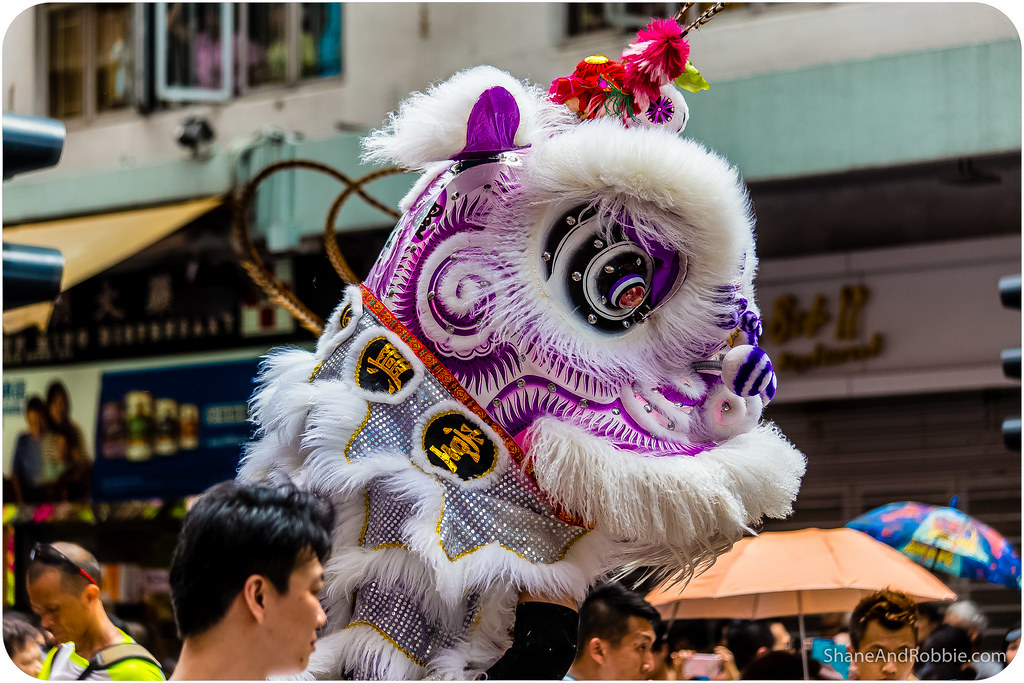 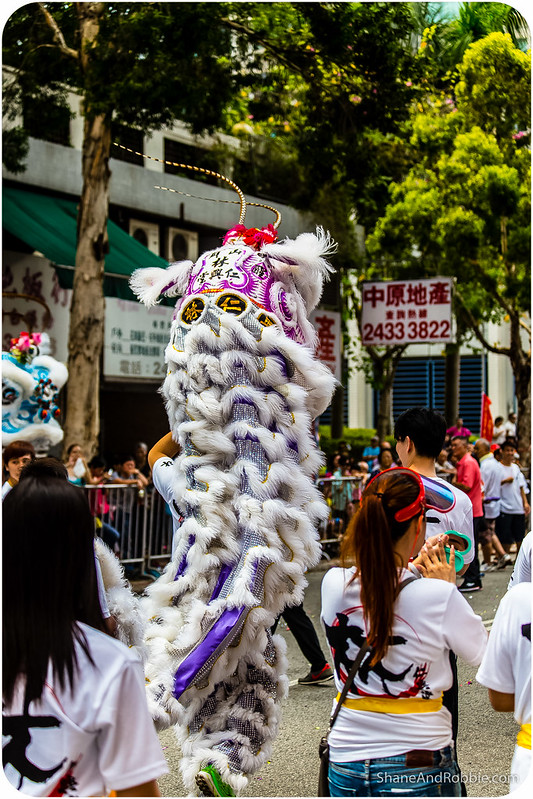 We found a spot to stand with the crowd and watch the passing parade, marvelling at the lion and dragon dancers as they jumped and wove their way along the streets. 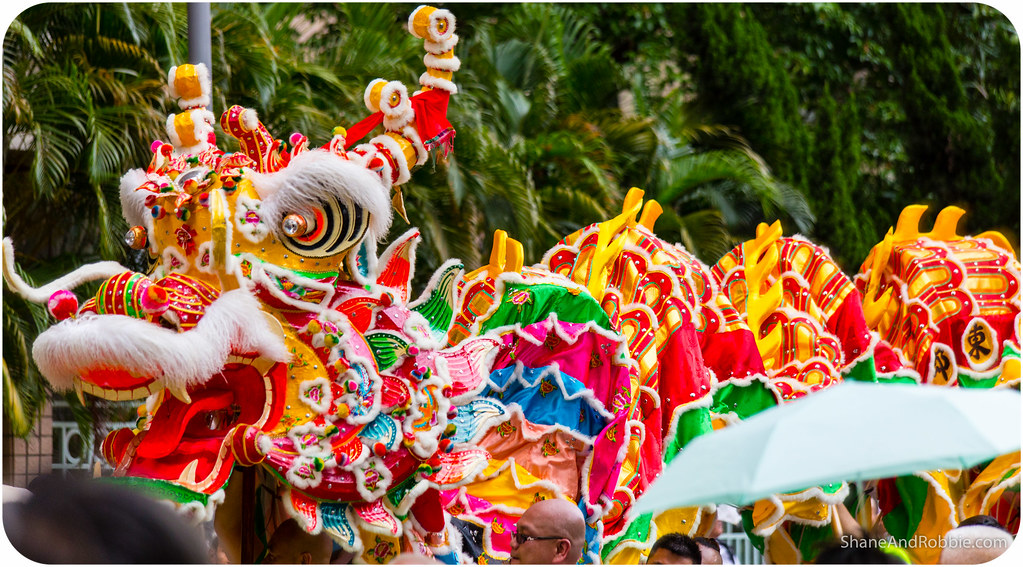 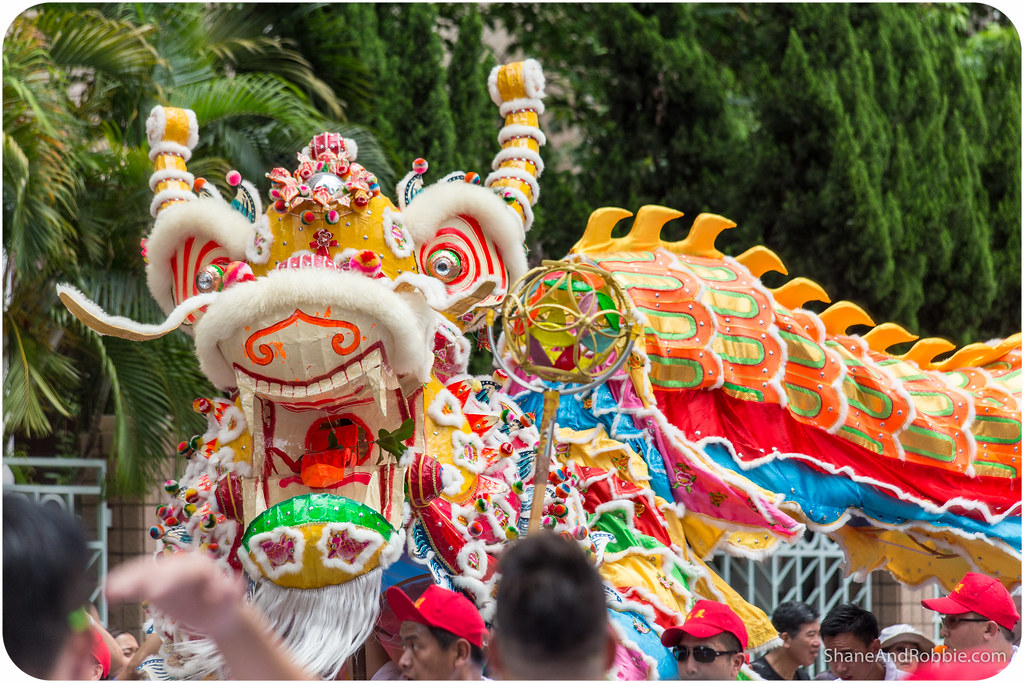 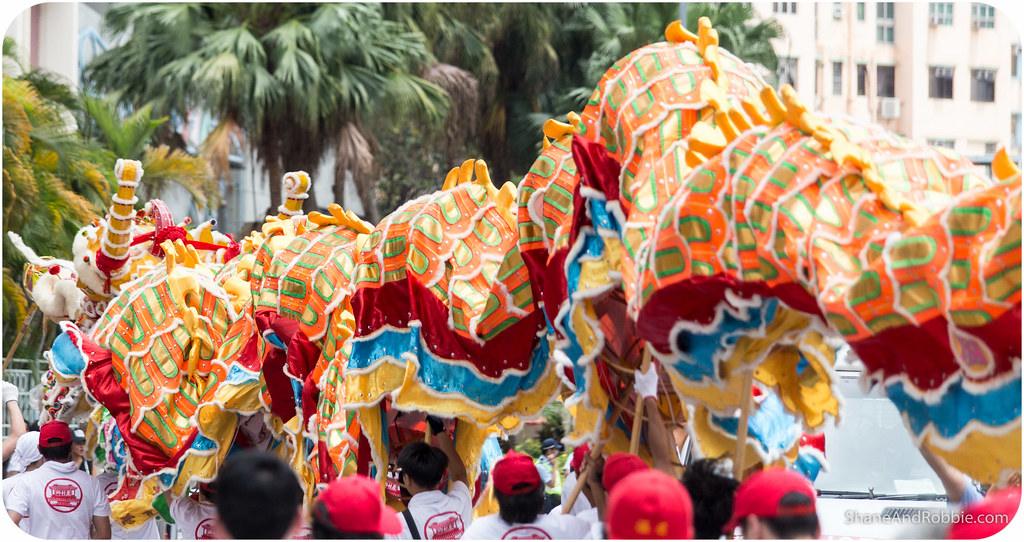 It was incredibly hot and humid today and just WATCHING those guys dance was exhausting! 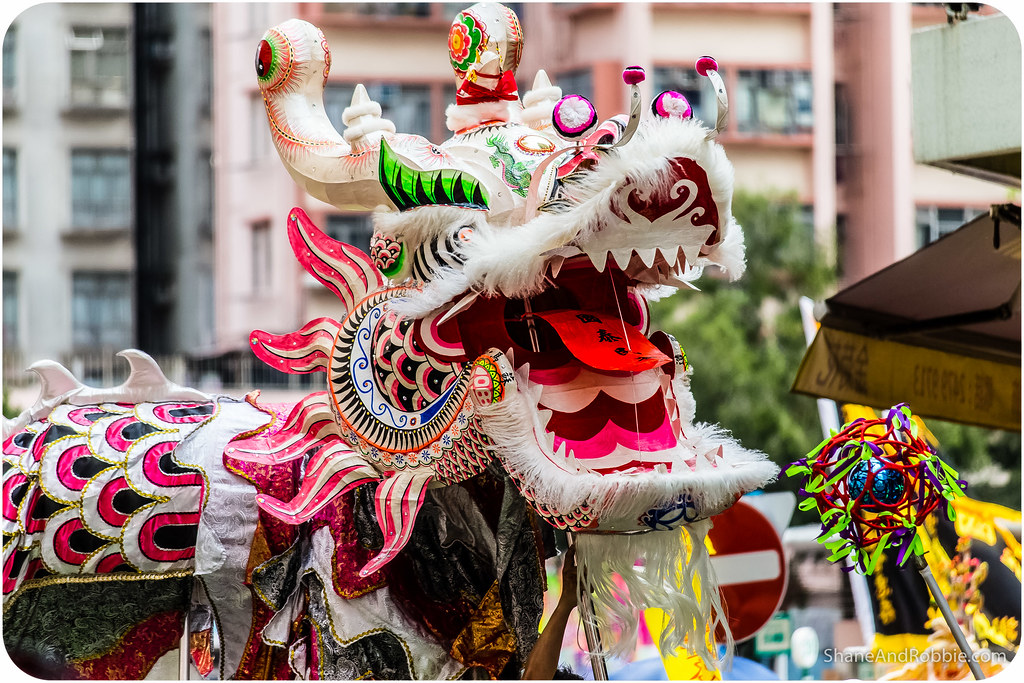 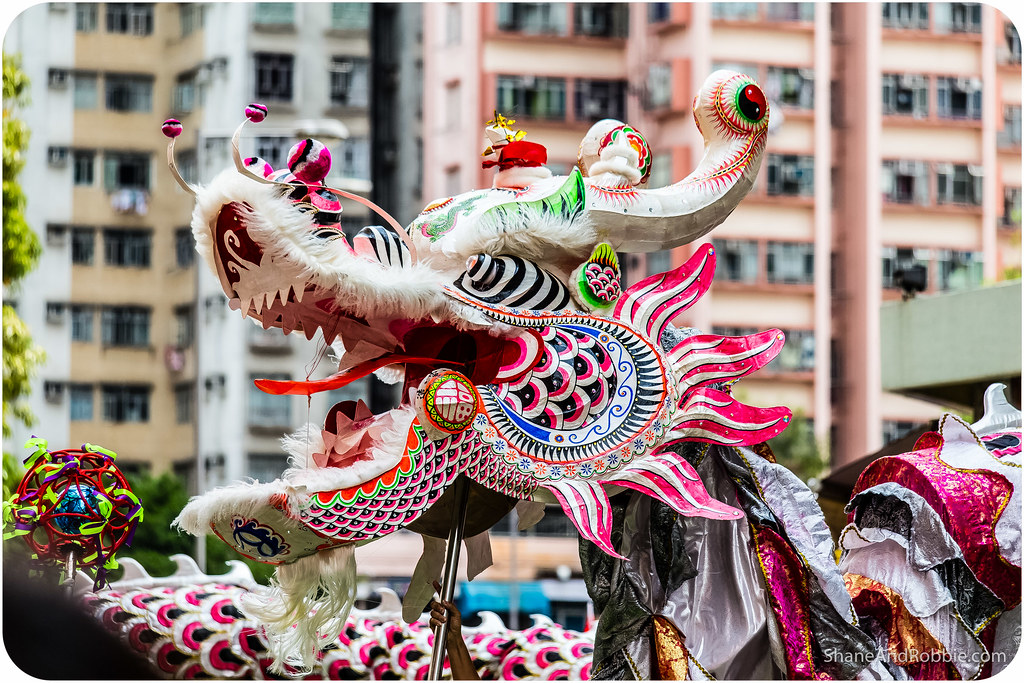 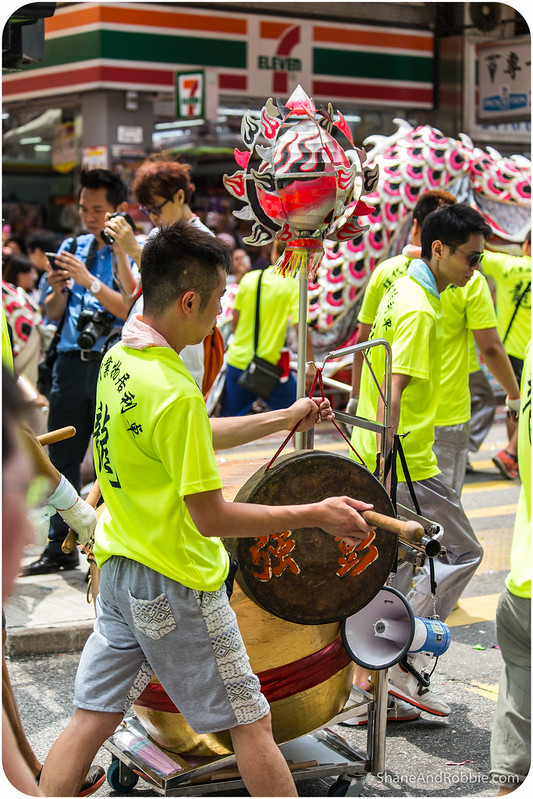 The colourful Fa Pau floats were great too. These large decorated towers were being taken to the temple, together with offerings for Tin Hau. 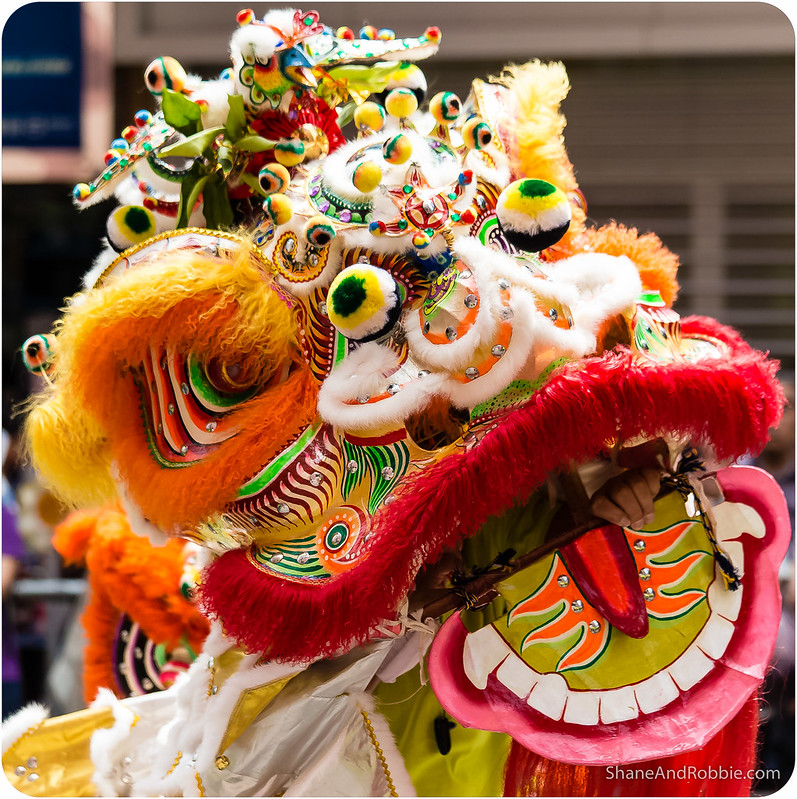 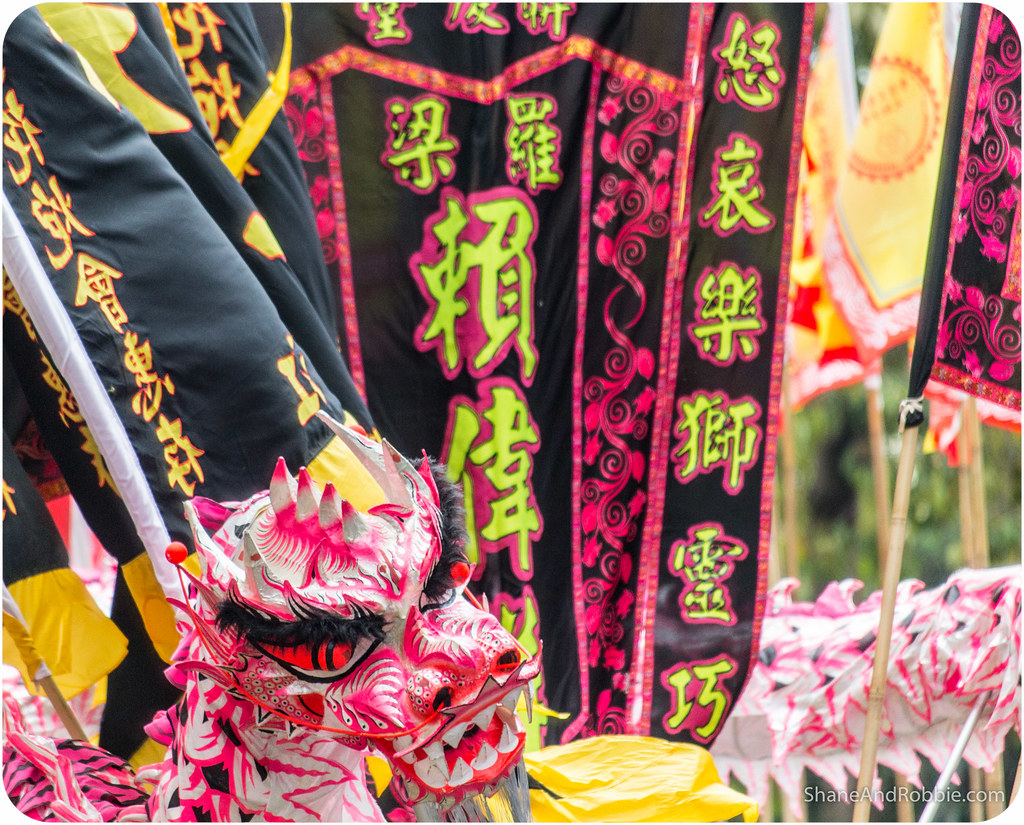 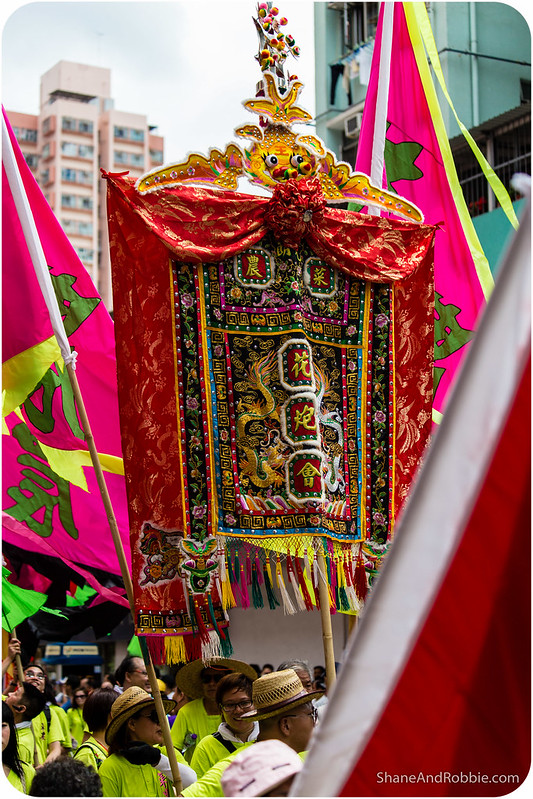 The street parade wound its way towards the temple, where celebrations continued and offerings were made. At this stage affairs became a little more sombre and, not wanting to intrude on people’s devotions, we moved and went for a stroll through Yuen Long. 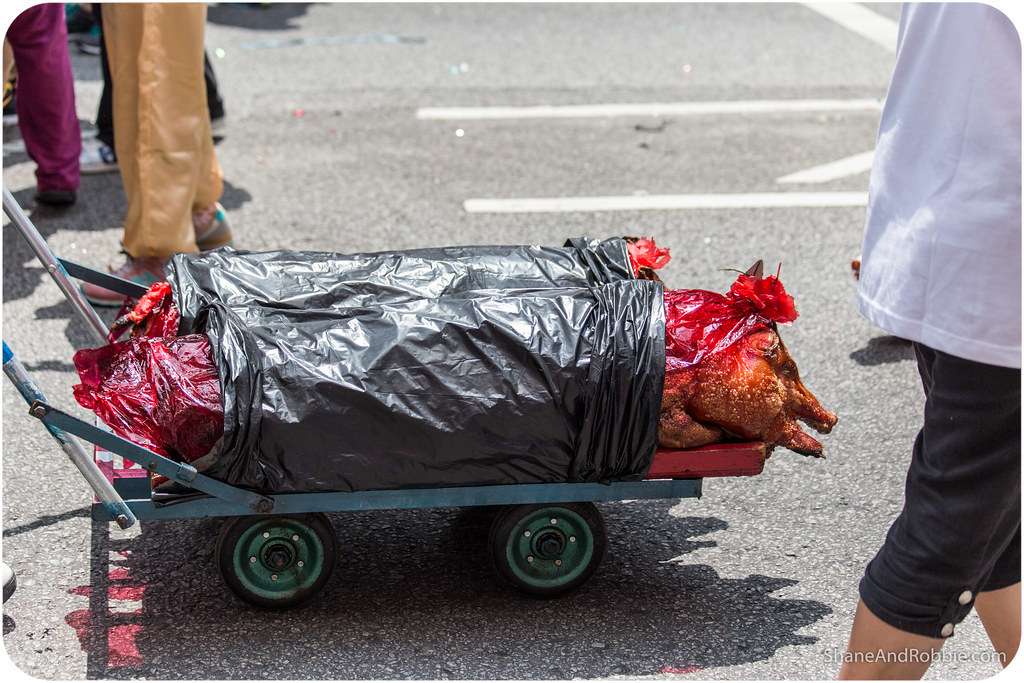 The town itself was busy and a bit more chaotic than central Hong Kong, but interesting none the less. 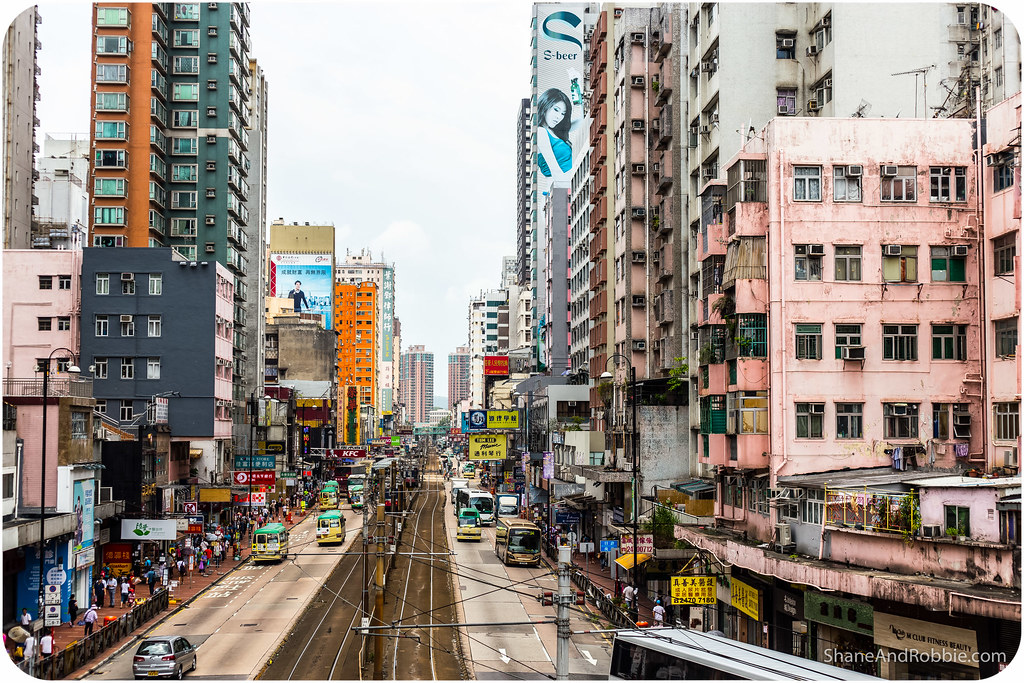 After a few more hours of exploring Yuen Long we had run out of steam and so found our way back to the station, bound for Hong Kong Island and the cool comfort of our hotel room for our afternoon nap*.
*Due to the ever-present, oppressive heat and humidity we’re finding it best to split our explorations of Hong Kong into 2 sessions: morning and evening. The afternoons are the hottest part of the day, as it builds towards the inevitable 4:00pm storm. Once the rain passes it cools down wonderfully, making for pleasant evening outings. 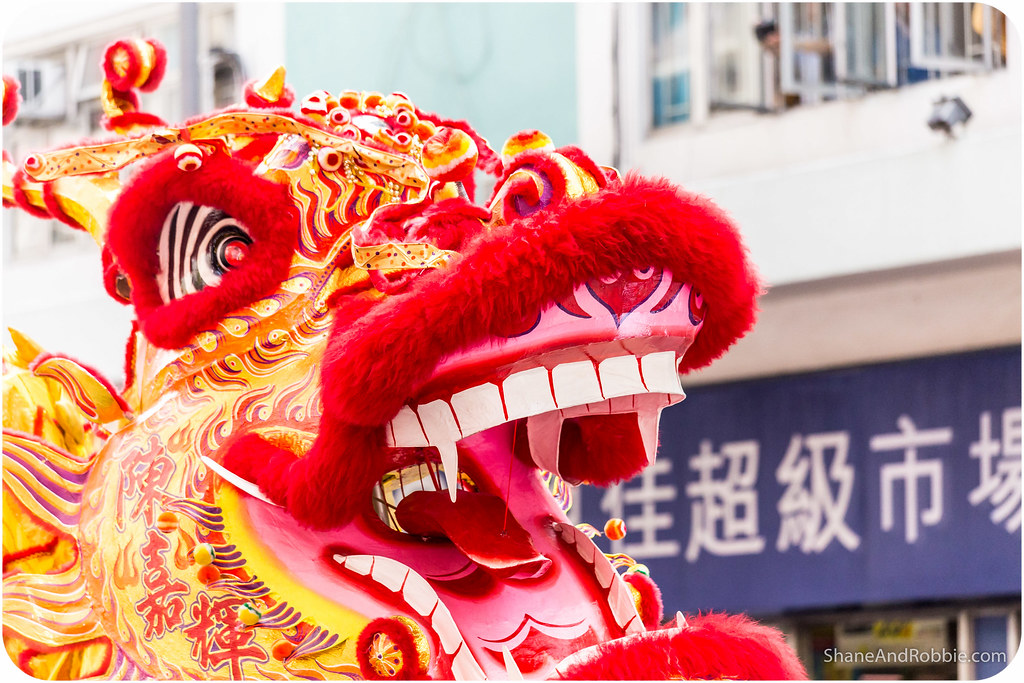 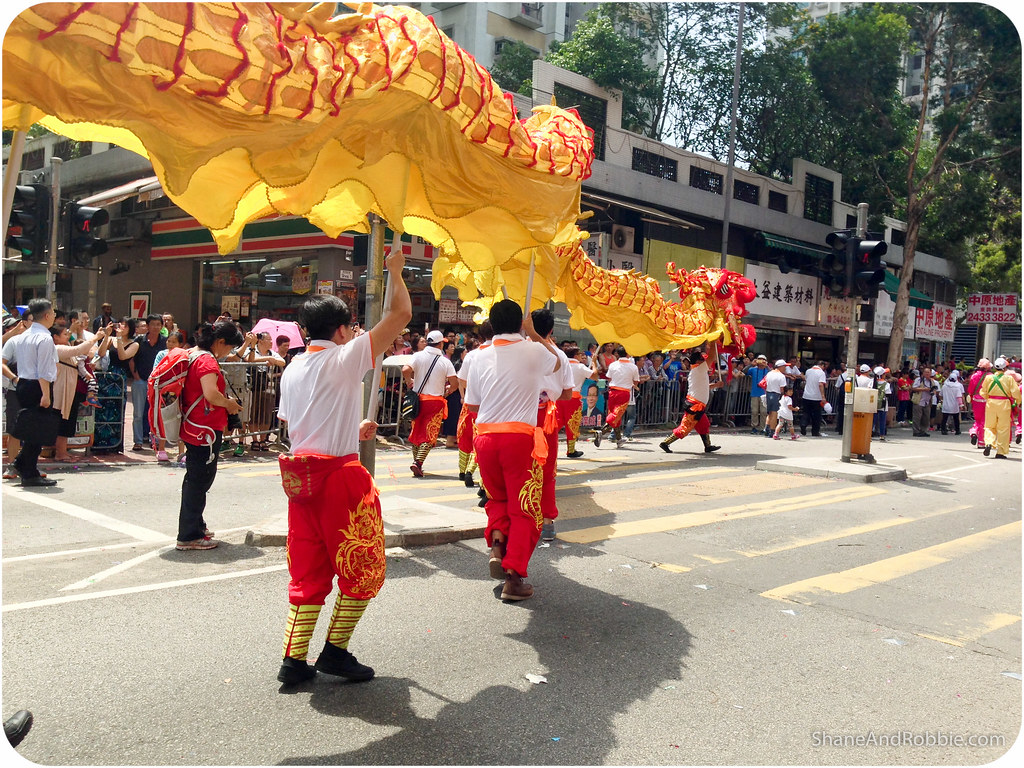 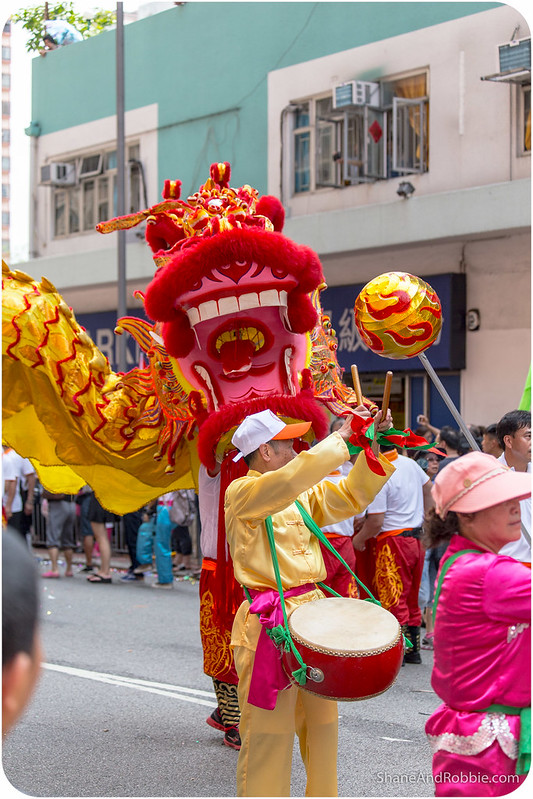 Once it had cooled down we wandered back out looking for food and found a great little eatery tucked up in the top floor of a tiny shopping arcade. For $72HKD (about $12AUD) we had a great meal of stir-fried meat and veggies (free gristle included) with rice. We had aspirations of going down to Victoria Harbour after dinner tonight but then a thunderstorm struck and we dashed home in the rain to watch the lightening from our hotel room instead. 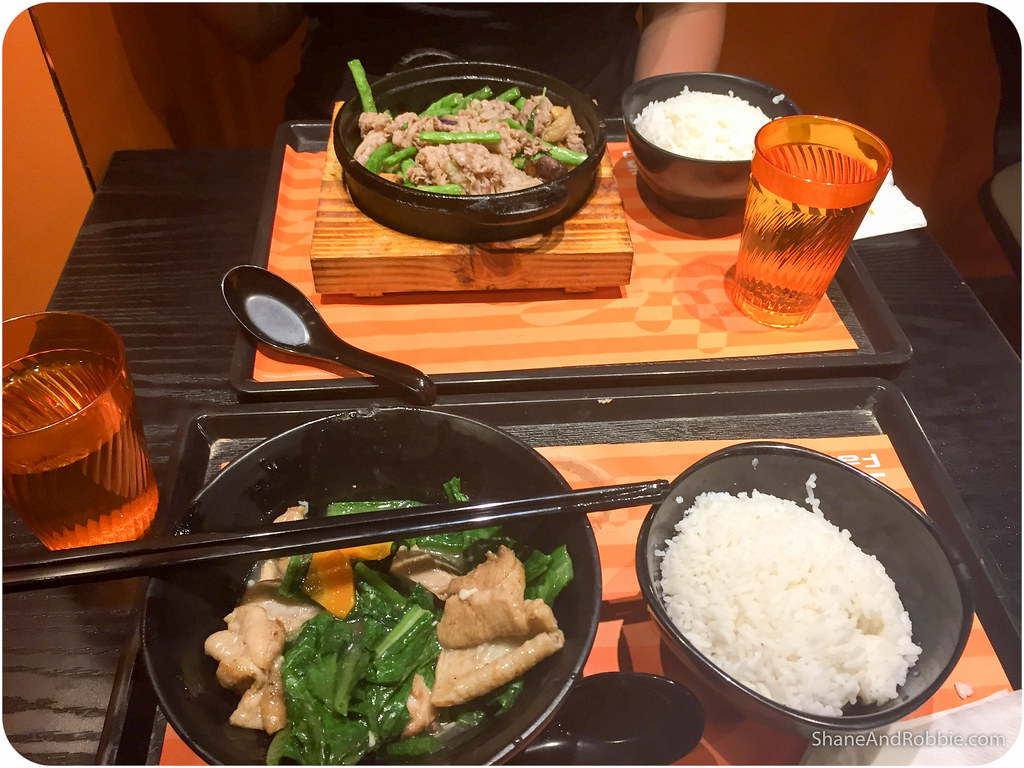 We’ve had a great few days in Hong Kong so far and have one more day to go. Not sure what we’ll do tomorrow, but we’re thinking it might be something quiet and (hopefully) not too crowded. Today was awesome, but the sheer number of people was quite overwhelming. Actually the sheer number of people EVERYWHERE in Hong Kong is quite overwhelming. And everyone walks everywhere so fast – even the escalators go faster than anywhere we’ve ever been! This is a full-on city that runs at full speed, 24 hours per day. It’s exhilarating and fascinating, but intense and exhausting at times too. Wonder how the rest of China will compare…. 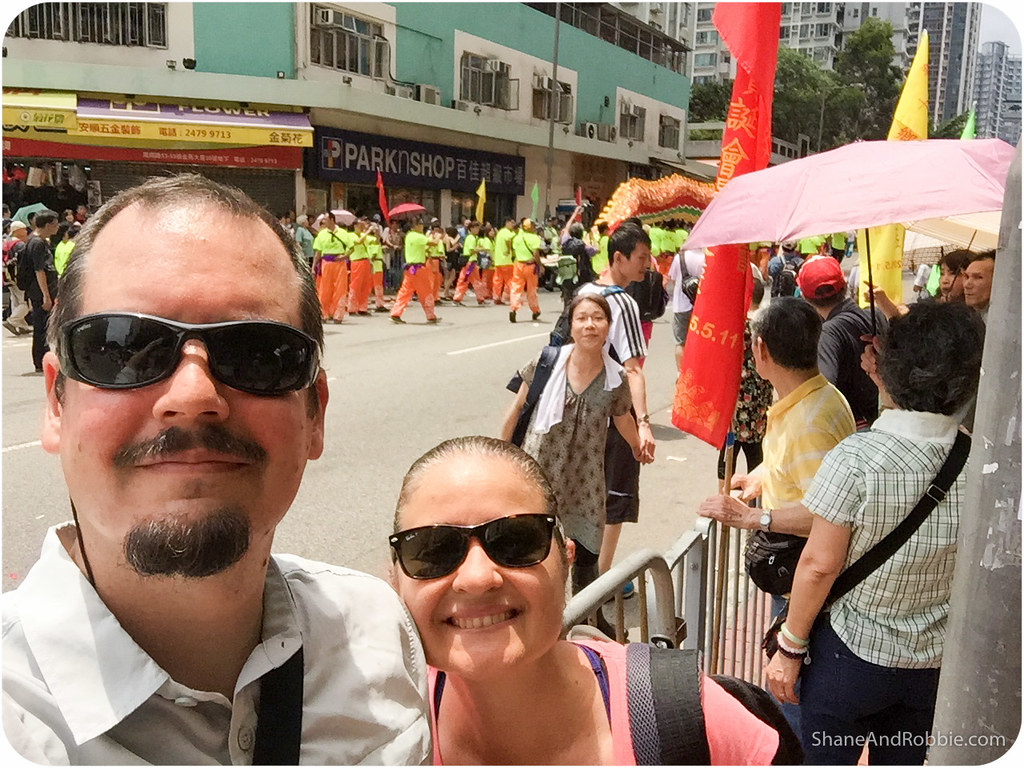