A DAM FOGGY MORNING IN YICHANG & A BRIGHT, SUNNY AFTERNOON IN XI’AN

The light rain and mist that settled over our cruise ship last night developed into a dense fog that closed the locks of the Three Gorges Dam. That meant that, rather than waking on the downstream side of the dam and cruising into the port town of Yichang, we had to be rushed off the cruise shop at 8:00 this morning and bussed into town. And the tour of the Three Gorges Dam we were supposed to enjoy turned into a couple of rushed photo stops on the way to Yichang. Not nearly as relaxing or majestic a start to the day as we had hoped! The afternoon in Xi’an more than made up for it though, with our visit to the city walls and into the old Muslim part of town reinvigorating our enthusiasm for sightseeing. 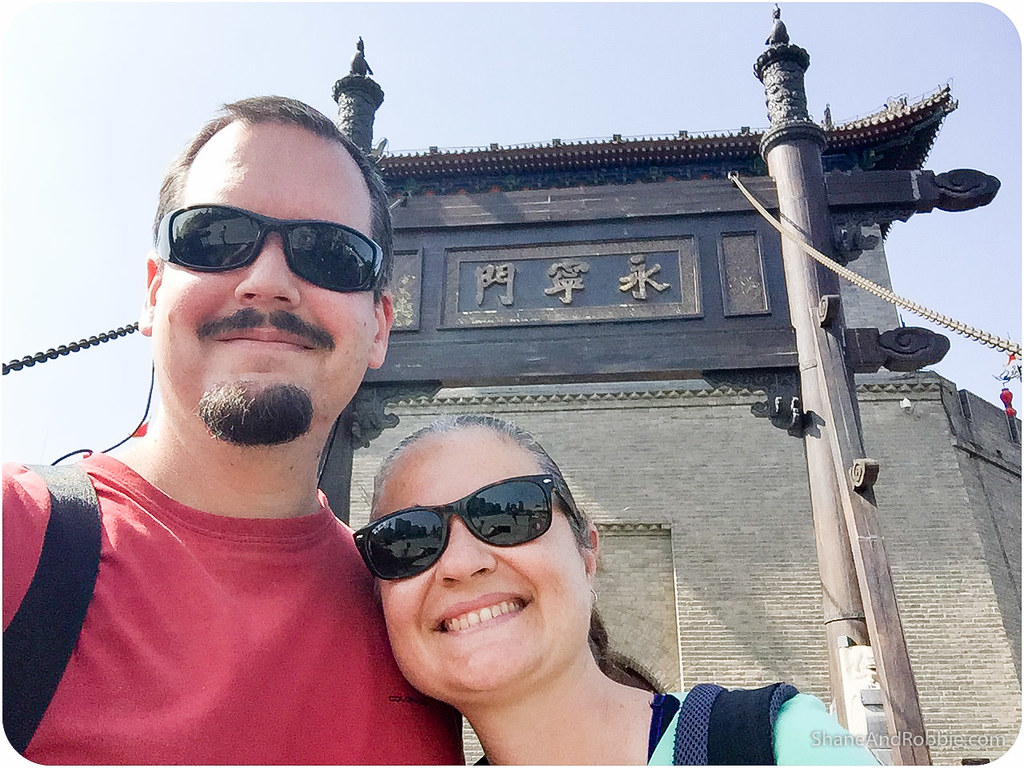 Usually the cruise ships travel down the 5 locks of the Three Gorges Dam overnight, taking about 4 hours to descend the 180m to the lower side of the dam. The dense fog* put an end to that for us, however. Instead we got to enjoy a chaotic bus trip through the Three Gorges Dam Scenic Area and into Yichang, the biggest town near the dam. Still, at least we got to see the dam wall and marvel at this immense engineering feat.
*Interestingly we later found out that such fogs are increasingly common around the dam, especially in the warmer months. The immense collection of water behind the dam is also bringing more rain to the towns in the immediate vicinity. 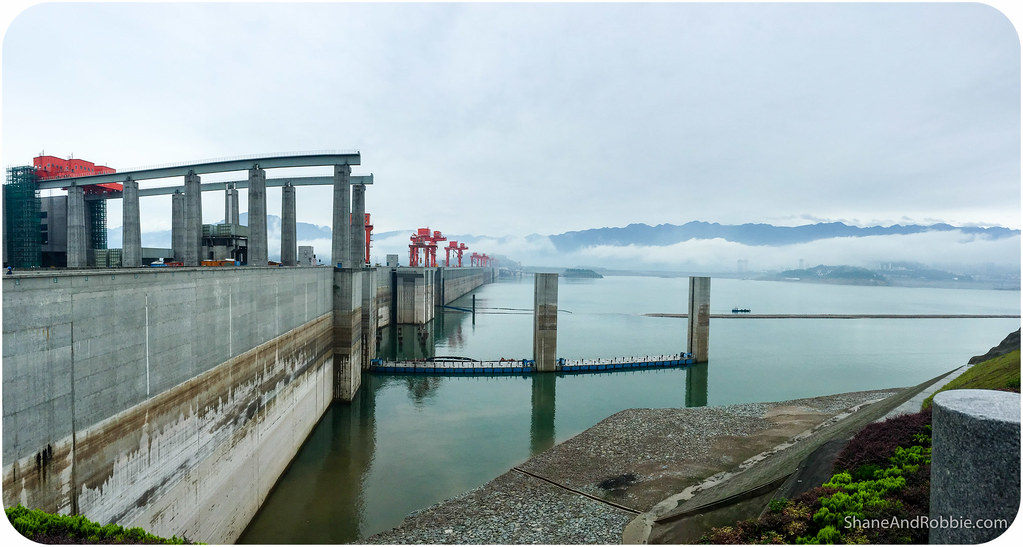 We learnt today that the Three Gorges Dam was primarily built to control the flow of the mighty Yangtze River; to store water and release it in a controlled fashion during the dry season and to reduce the risk of flooding downstream during the wet season. It has also helped make shipping along the Yangtze easier and is the world’s largest hydroelectric dam. The dam’s 32 turbines produce about 100 billion kW of power every year. This is an astronomical figure, but we were even more shocked when we learnt that this barely meets 3% of China’s total energy demands!
*More than 75% of this country’s energy comes from fossil fuels, with nuclear power, wind and hydroelectric power making up the other 25%. 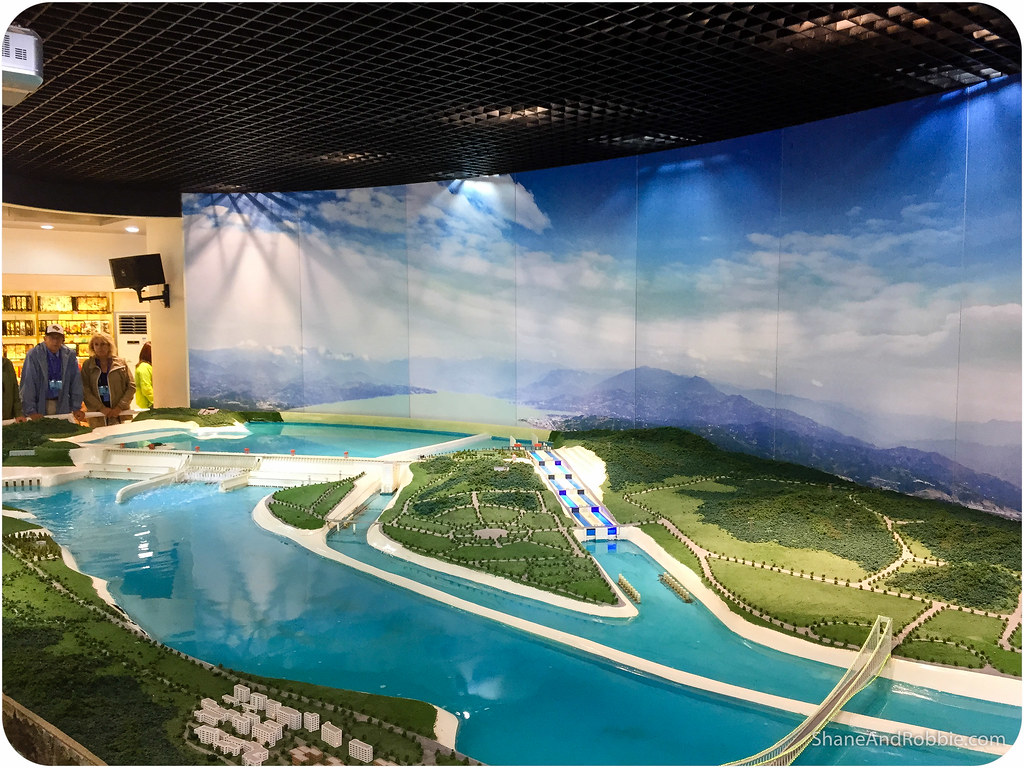 Construction of the dam began in 1993 and finished in 2012. The “official” description we were given today stated that the project is a historic engineering, social and economic success; however, whilst we can respect and marvel at the engineering, we can’t ignore the fact that dam flooded numerous archaeological and cultural sites and displaced some 1.3 million people*. Additionally the Three Gorges Dam has caused the extinction of a number of animal species native to the Yangtze (including the Chinese pink river dolphin) and is threatening the existence of others (such as the giant 400kg Yangtze sturgeon that would once swim all the way upstream to reproduce but now cannot and only continues to exist as a species thanks to fish farms that repopulate the river each year). Many plant species native to the Three Gorges area have also been threatened. Like a lot of things in China, it seems the benefits the Three Gorges Dam brings have come at a significant cost to people and nature. Not that any of these things were discussed during our perfunctory tour of the Three Gorges Dam; unsurprisingly only the benefits of the project were highlighted and all questions smoothly redirected.
*Most people were relocated to towns and villages rebuilt higher up in the gorges – the whole way along the cruise we could see new homes built for these relocated farmers. Some villagers, however, were given funds and told to move to urban centres. Unfortunately these funds were often insufficient to help these farmers settle in the big cities and, in one district, relocation funds “disappeared” after being sent to the local government, leaving residents without compensation! 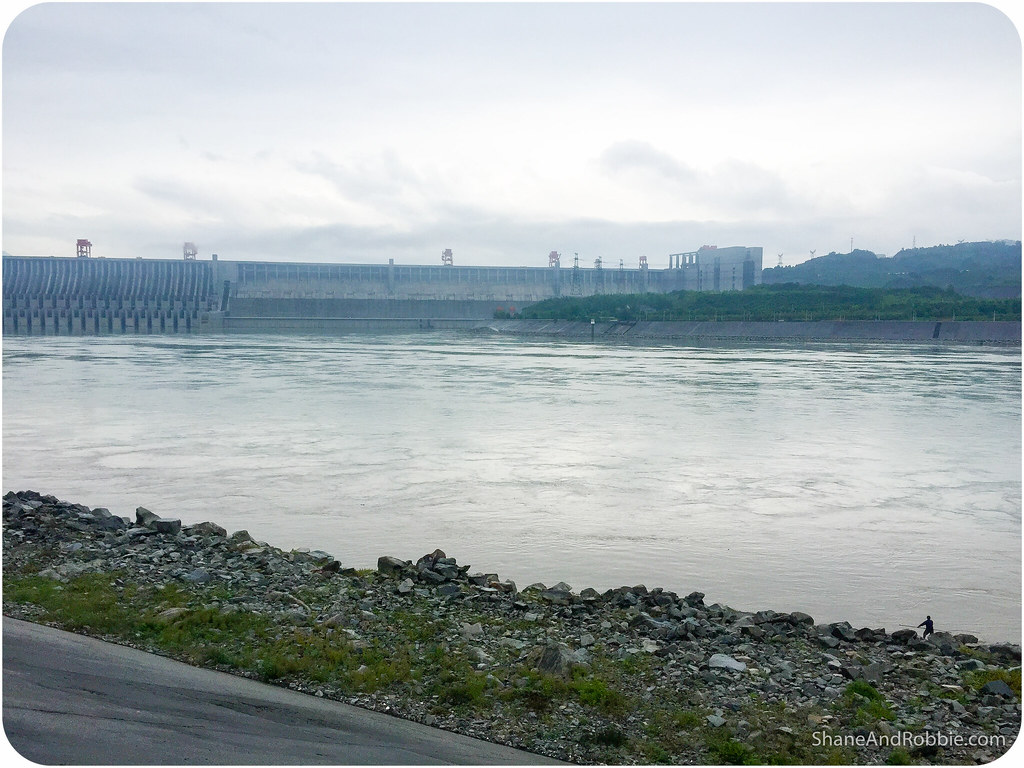 Between the dense fog, the badly organised exit off the cruise ship*, and the disappointing tour of the Three Gorges Dam, we arrived in Yichang pretty bemused. Luckily we were quickly whisked away to Yichang airport for our flight to Xian, where our day quickly improved.
*Travelling in China is, in our experience, a bit like a never-ending episode of “Fawlty Towers”. No one seems to know what’s going on half the time, and the other half of the time everyone’s just doing their best to work around the chaos of day-to-day life to get things done. We’ve learnt to just laugh and roll with it, though the sheer frustration of it all would send us grey if we had to live here! 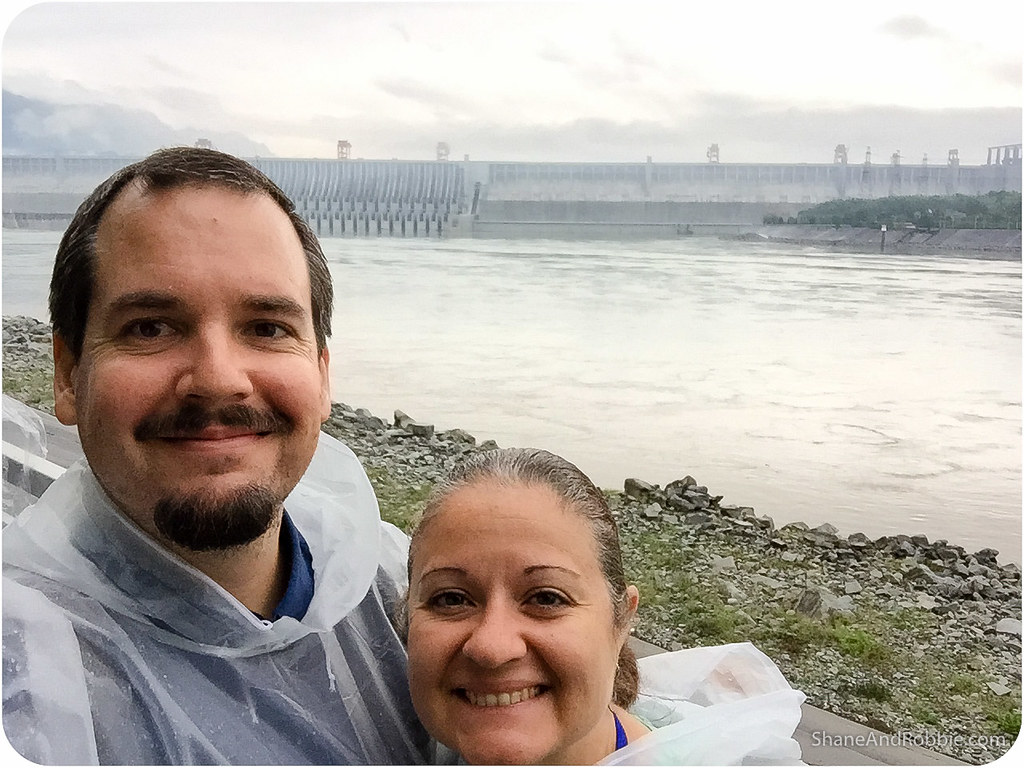 Xi’an is the capital of Shaanxi province and our base for the next few days. This modern, bustling city of 8 million is also one of China’s most historically important cities. Once known as Cheng-an, Xi’an was the capital of China for 600 years during the early years of a unified China (i.e. prior to 1000AD); it was also the starting point of the Silk Road and a flourishing international city in the 14th to 18th centuries; and, most famously, Xi’an is home to the Terracotta Warriors. 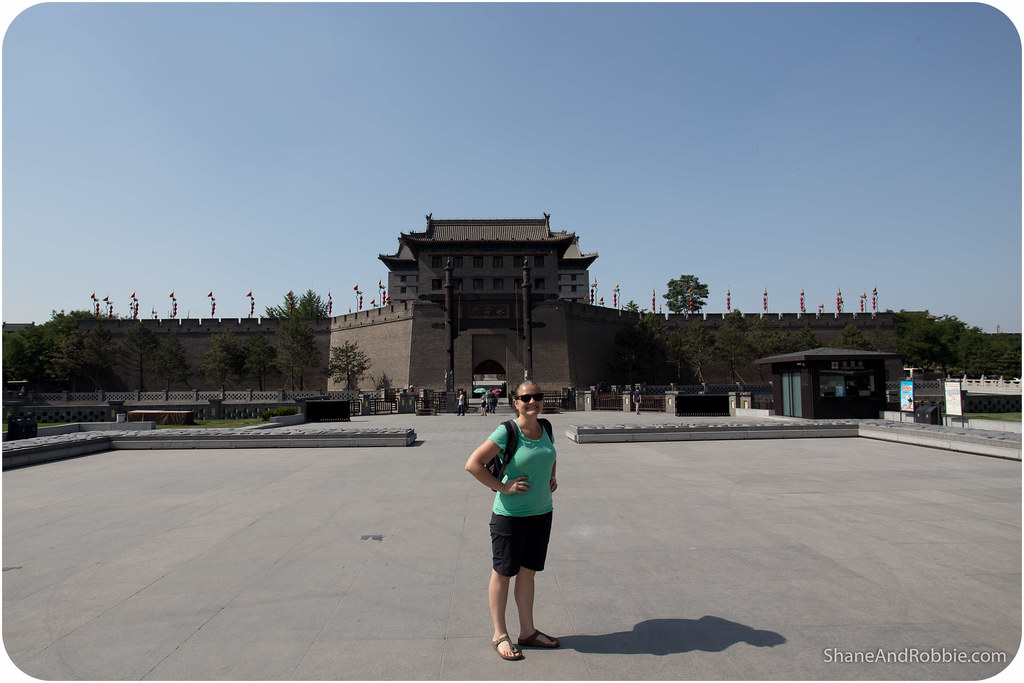 We arrived in Xi’an in the early afternoon and, after dropping our bags at the hotel, set out to explore one of the city’s bets known features: its intact city walls. 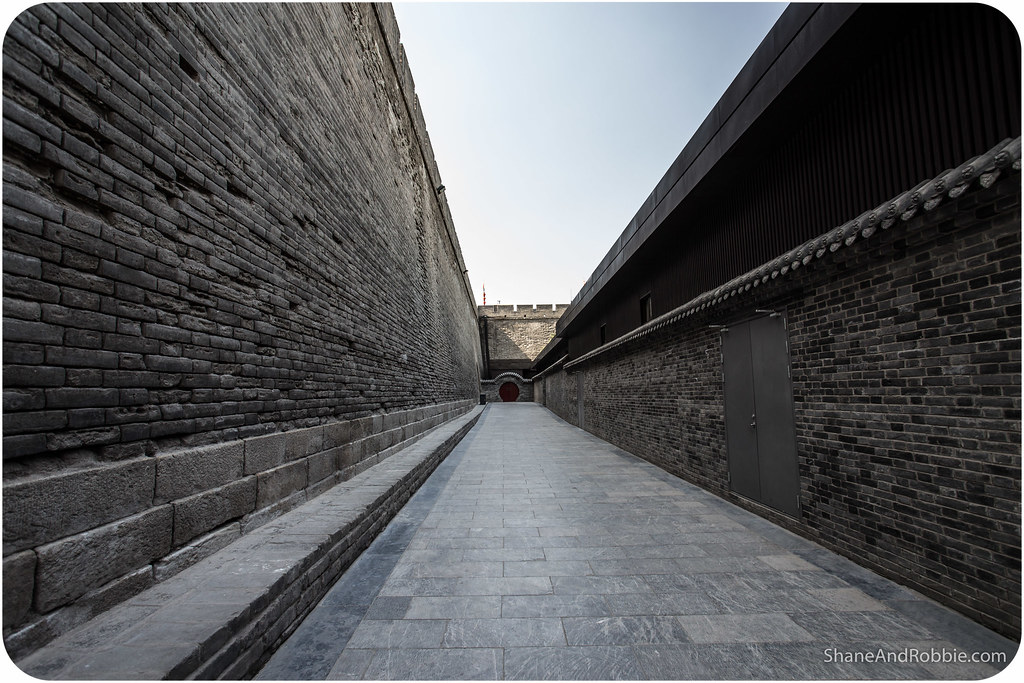 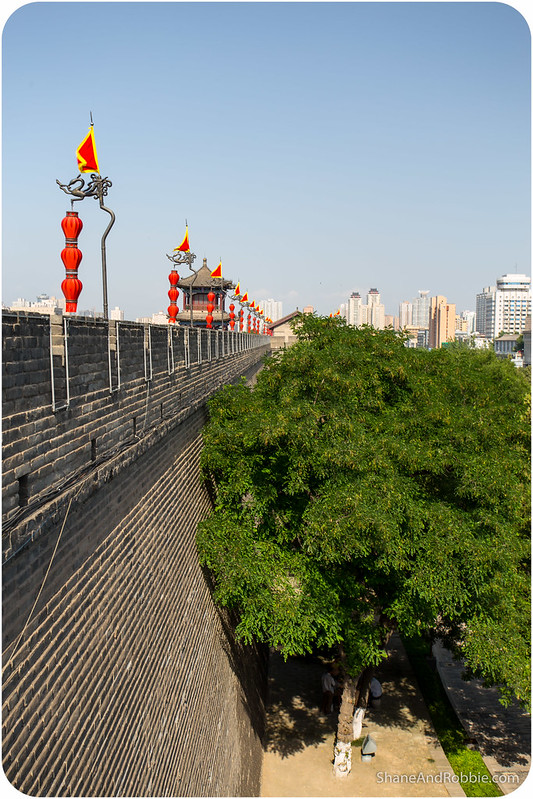 Xi’an’s city walls are the most complete of any in China, with all 13.7km still standing after more than 600 years. Built in the 15th century to help protect this wealthy trade city, Xi’an’s city walls are 12m high, 14m wide at the top and 18m wide at the bottom. The walls originally had a deep moat surrounding them too, though today this has been filled in and is now an extensive public park. Every 120m there is a rampart which extends out from the main wall; atop each of the 98 ramparts there’s a guard house from which archers could shoot crossbows at enemies. And at each of the four points of the compass there was a gate and drawbridge to control entry into the city. Very cool! 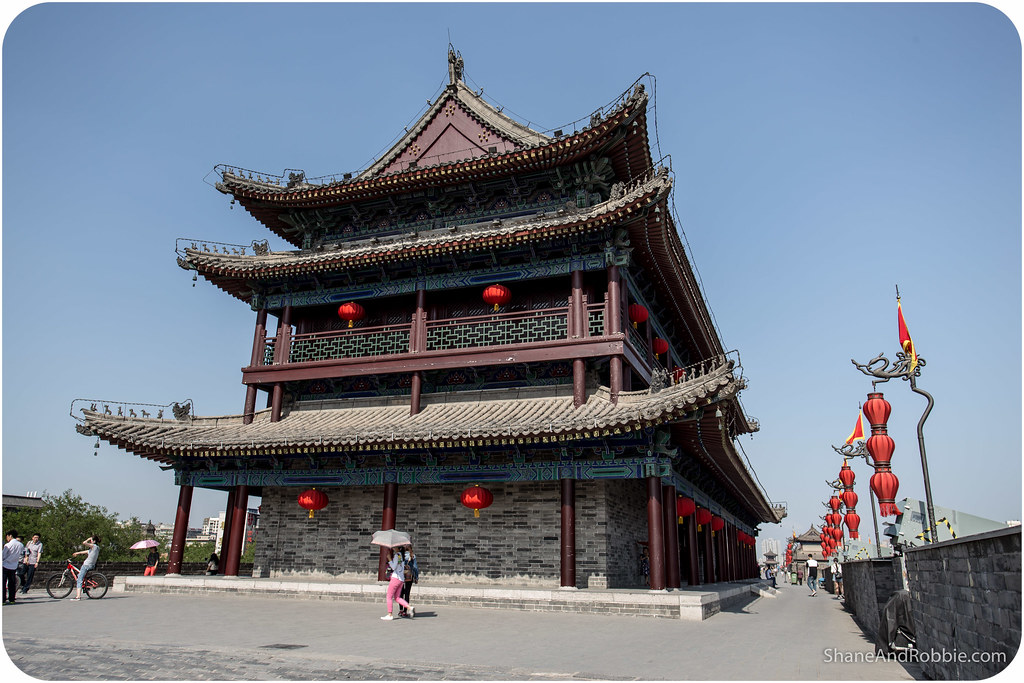 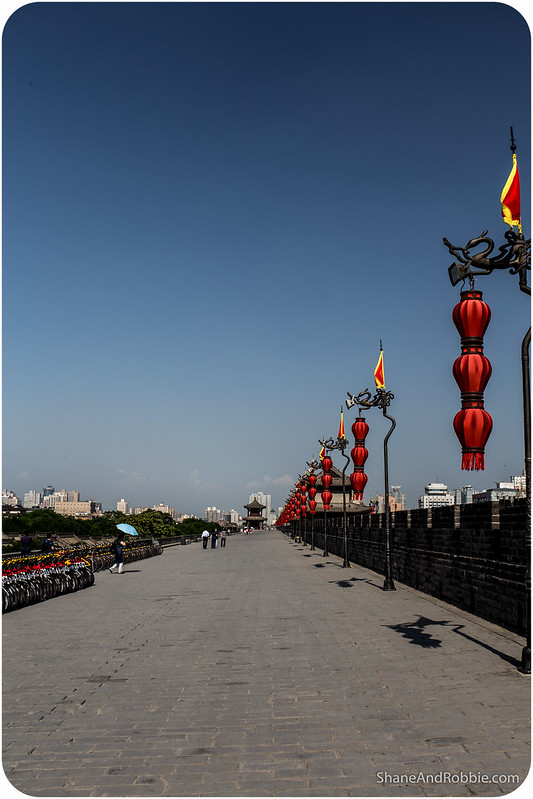 We walked a section of the wall, looking over into the old town to admire the buildings there that have been reconstructed in traditional Chinese style. 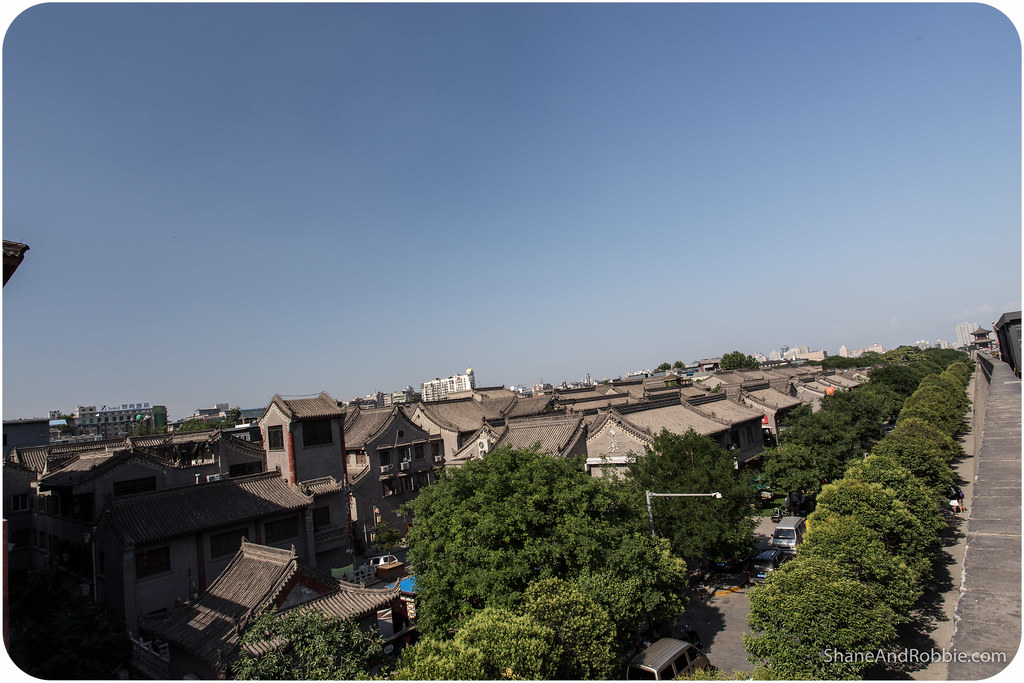 Looking over in the other direction, towards the new part of Xi’an, we could see lots of fancy shopping malls and high-rises. The contrast between old China and the new China has never seemed quite so marked as it did this afternoon in Xi’an! 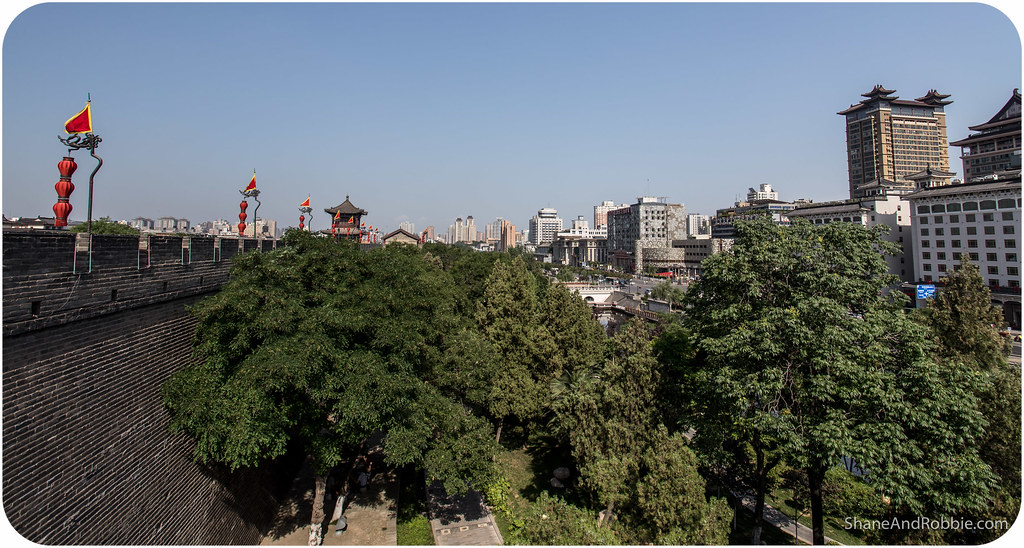 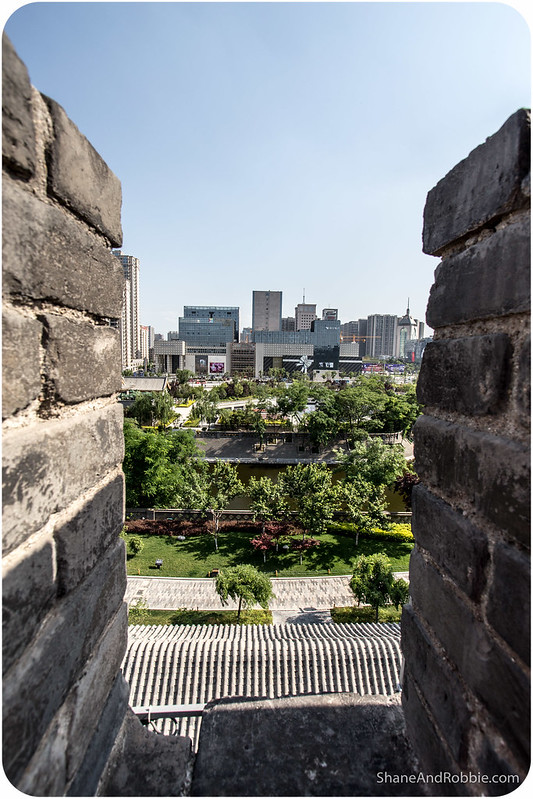 Coming down off the immense city walls we strolled through the old town towards the Muslim Quarter. This small area of Xi’an is all that’s left of a once thriving Chinese Muslim community that flourished during the years of the Silk Road. We spent most of our afternoon strolling through the Muslim Quarter, enjoying the sights and smells. It was quite odd smelling barbecued lamb and seeing women with their hair covered – these are not sights or smells we have come to associate with China! It was fascinating to see how Chinese culture and Islam have become interwoven, to create this unique community here in Xi’an. 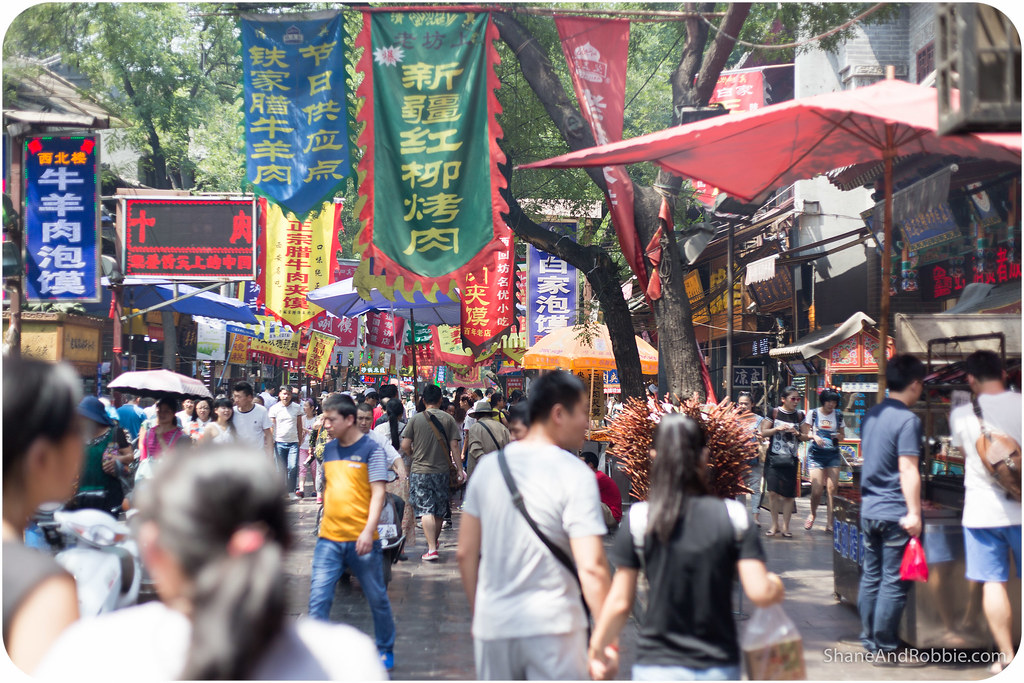 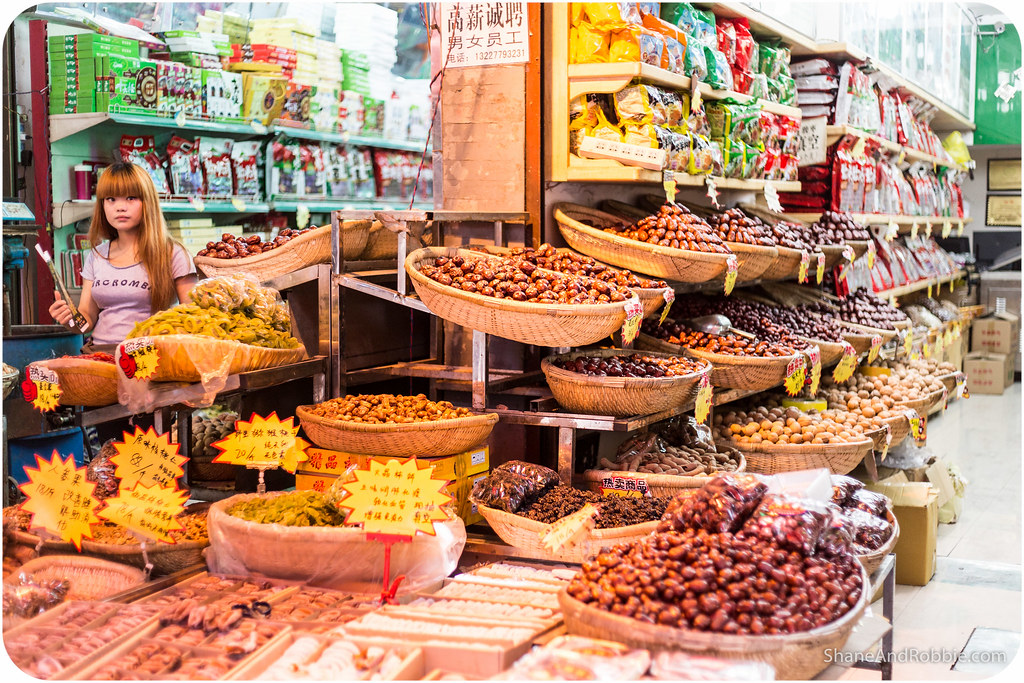 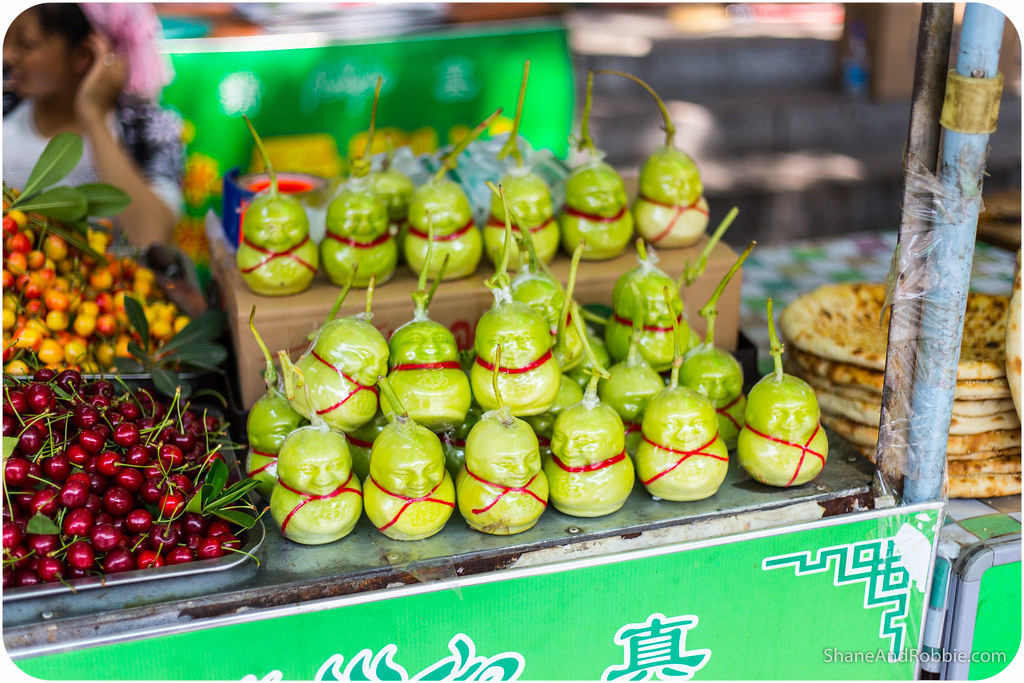 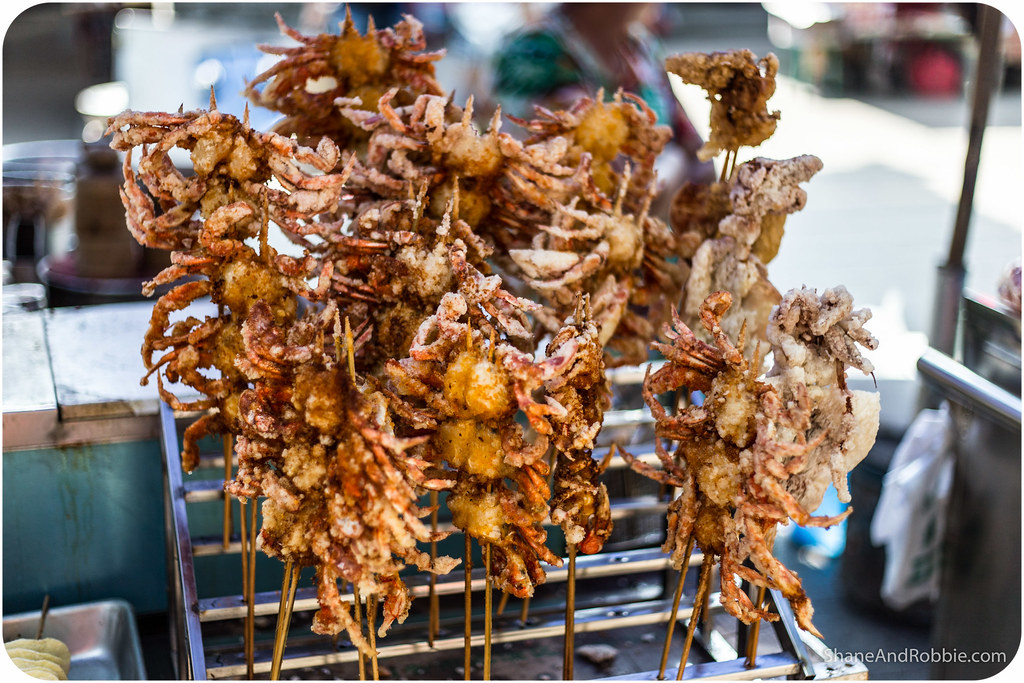 As the sun began to set we made our way back out of the old town and away from the Muslim Quarter and the now illuminated city walls of Xi’an. This really is a fascinating town, with a wealth of history to explore. Tomorrow we’re going out to enjoy more of this history: we’re see the Terracotta Warriors! 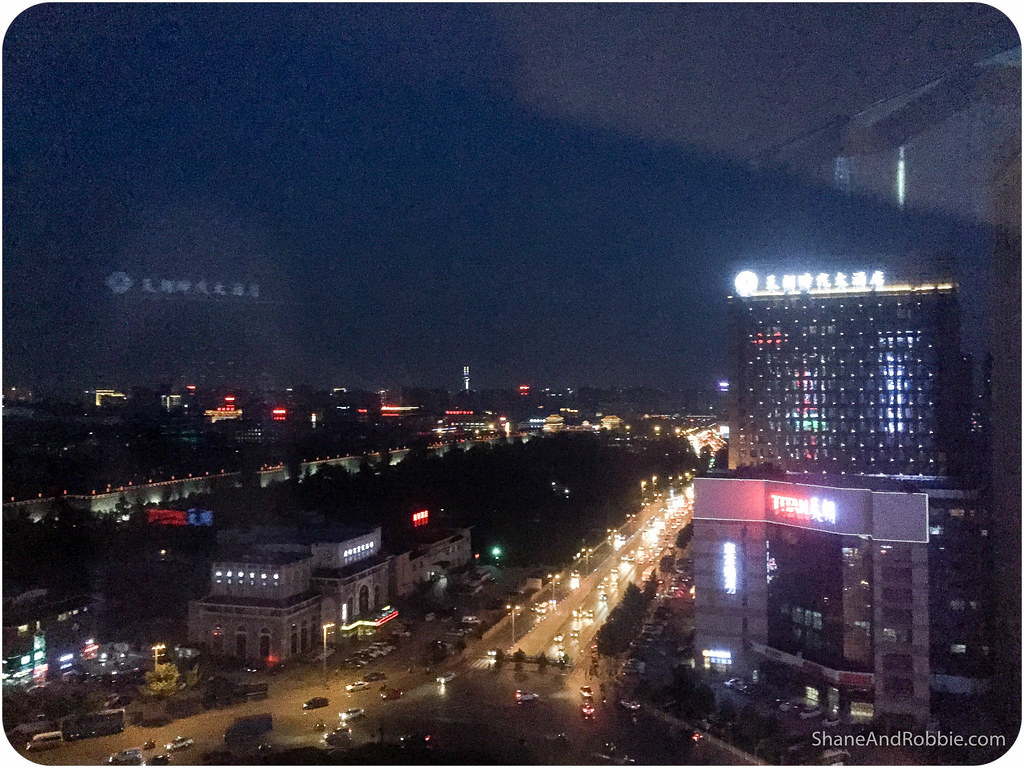