The Terracotta Army is Xi’an’s most famous archaeological discovery and is one of the main reasons we wanted to come to this city. Like the treasures entombed with the pharaohs of ancient Egypt, this collection of terracotta sculptures was designed to protect Qin Shi Huang, the first Emperor of China, during his afterlife. To date more than 8,000 soldiers, 130 chariots and 750 horses have been unearthed in Lintong, a small farming community about 30km east of Xi’an. Like most people we had seen photos of the Terracotta Army, but nothing prepared us for the sheer scale of Emperor Qin’s necropolis.

The Terracotta Warriors were discovered in 1974 by two farmers who were digging a well. For centuries occasional reports trickled in mentioning pieces of terracotta figures and fragments of pottery being discovered in the region; but it wasn’t until these farmers unearthed a large collection of warriors that Chinese archaeologists went to investigate. What they found has become the stuff of legends: an army of warriors, each with their own weaponry and all of them unique. 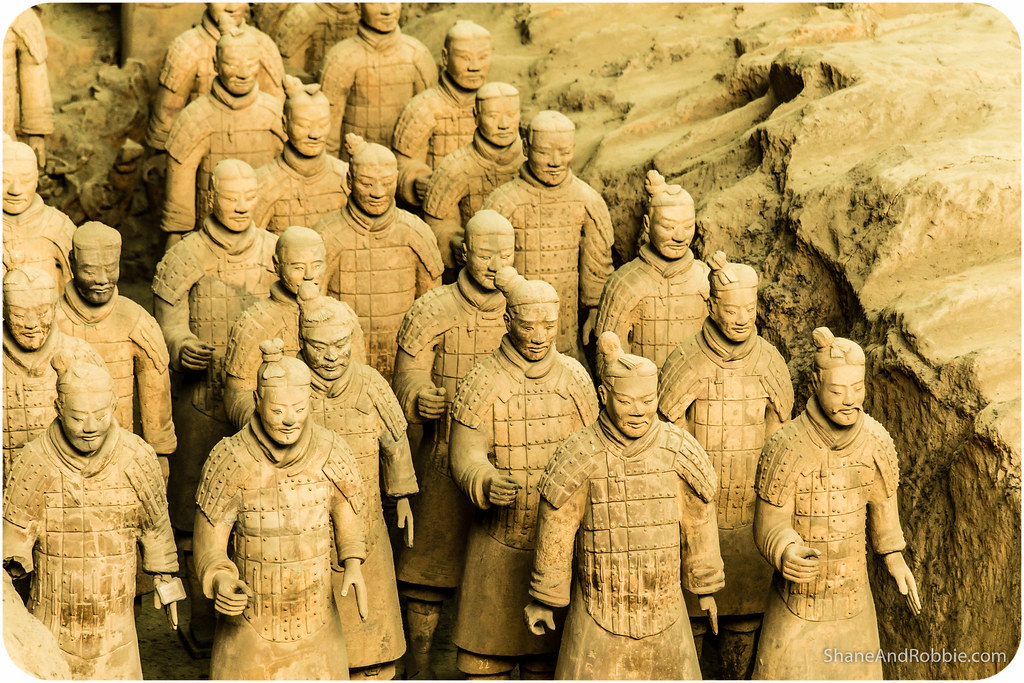 The Terracotta warriors are buried in pits, with Pit 1 being the largest. The pits are arranged around the central burial tomb* of Emperor Qin, with all the warriors are facing outwards in defensive poses, ready to protect the emperor in the after life.
*Interestingly the emperor’s main tomb is pyramidal, which again made us think of Egypt. What was it about ancient rulers wanting to live forever, buried with all their treasure under pyramids? Emperor Qin’s necropolis complex is not open to the public, but we learnt that it is constructed as a microcosm of his imperial palace. It consists of several offices, halls, and stables, and contains a river of liquid mercury to represent waterways around the palace. 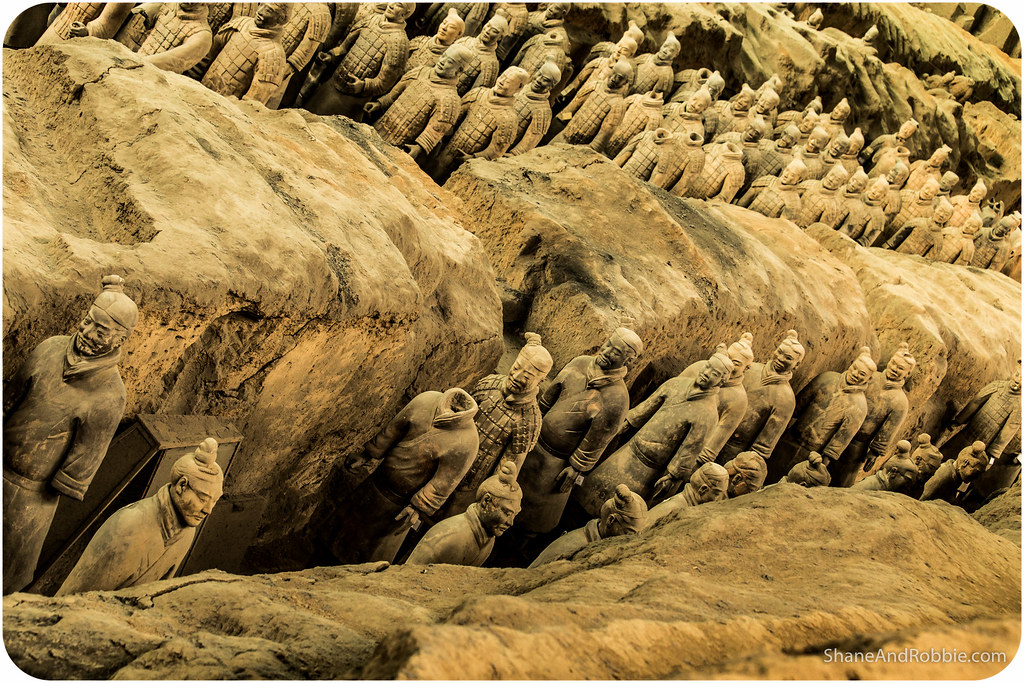 A number of terracotta non-military figures were found in other pits, including acrobats, strongmen and musicians. In order to protect the sculptures and treasures within, these pits have not been excavated however. 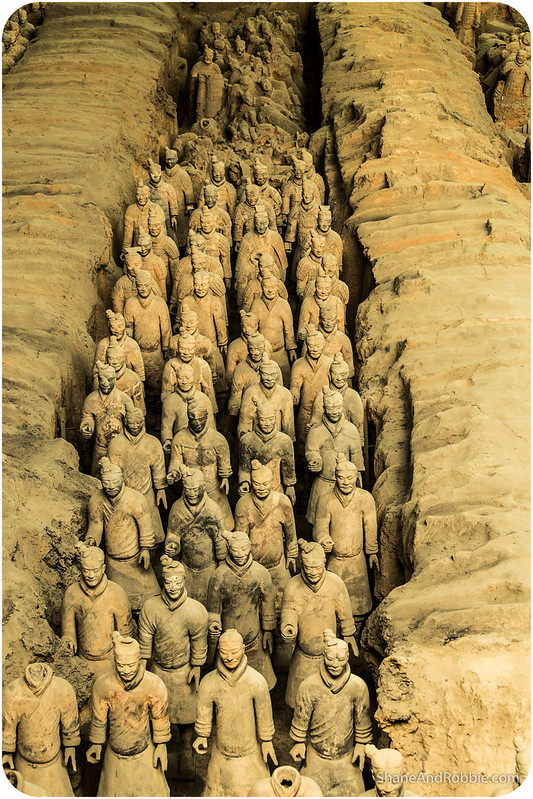 Up to 5m of reddish, sandy soil has accumulated over the site in the two millennia following its construction around 210BC. Archaeologists working to uncover the warriors have had to remove all this dirt, and then carefully break away the “roof” of the pits to uncover the warriors, chariots and horses underneath. 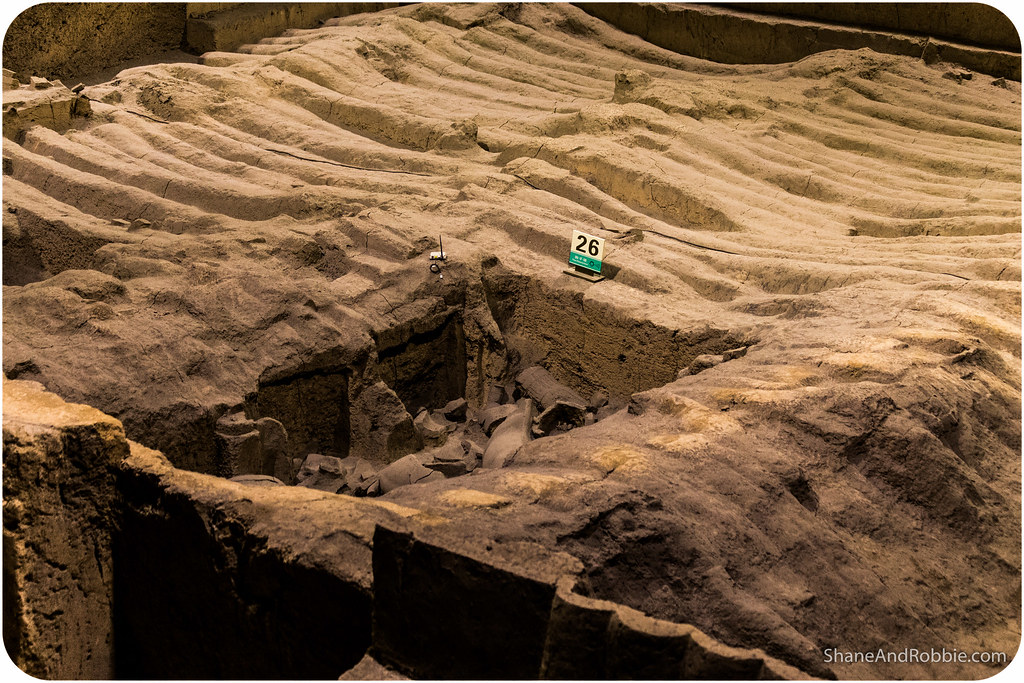 Most of the warriors discovered have been broken, with the weight of all the earth above them crushing them into small pieces. Like a giant jigsaw puzzle of 8,000,000 pieces, the army is gradually being put back together by archaeologists. 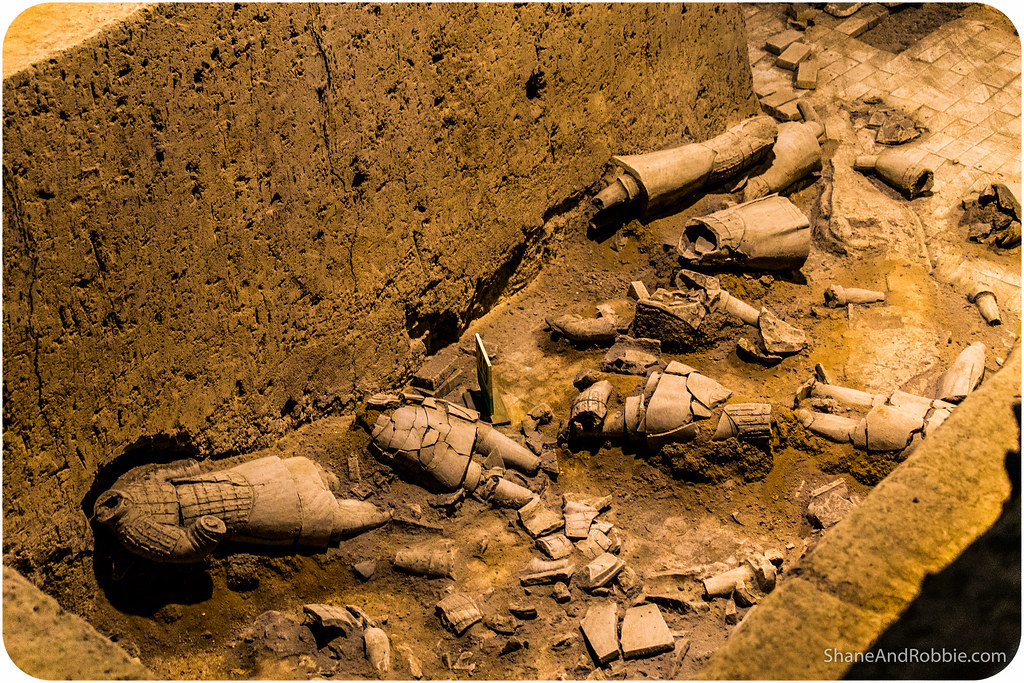 We got to see a number of warriors that have been reconstructed, and marvelled at the detail in each one. With unique facial features and expressions, each solider really was a work of art. 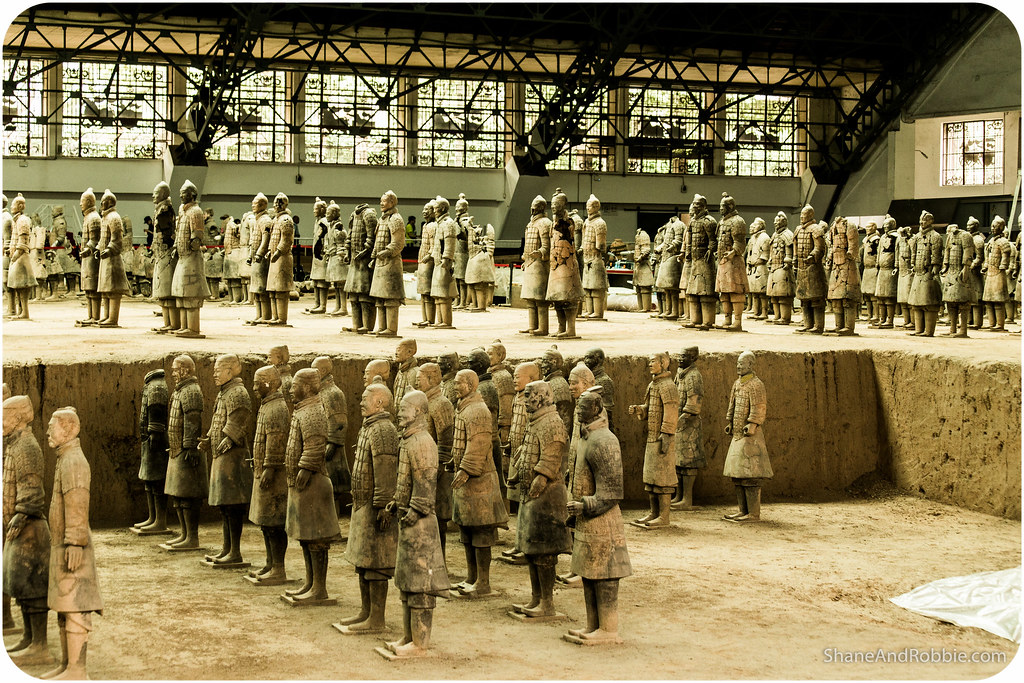 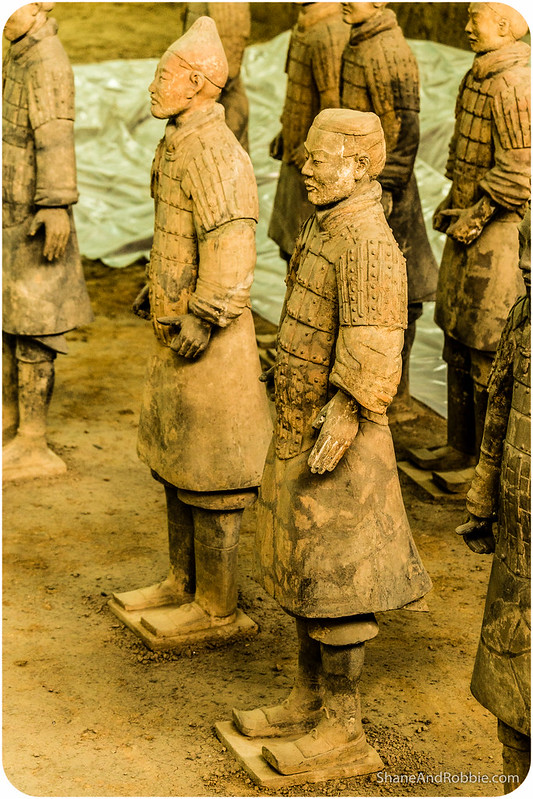 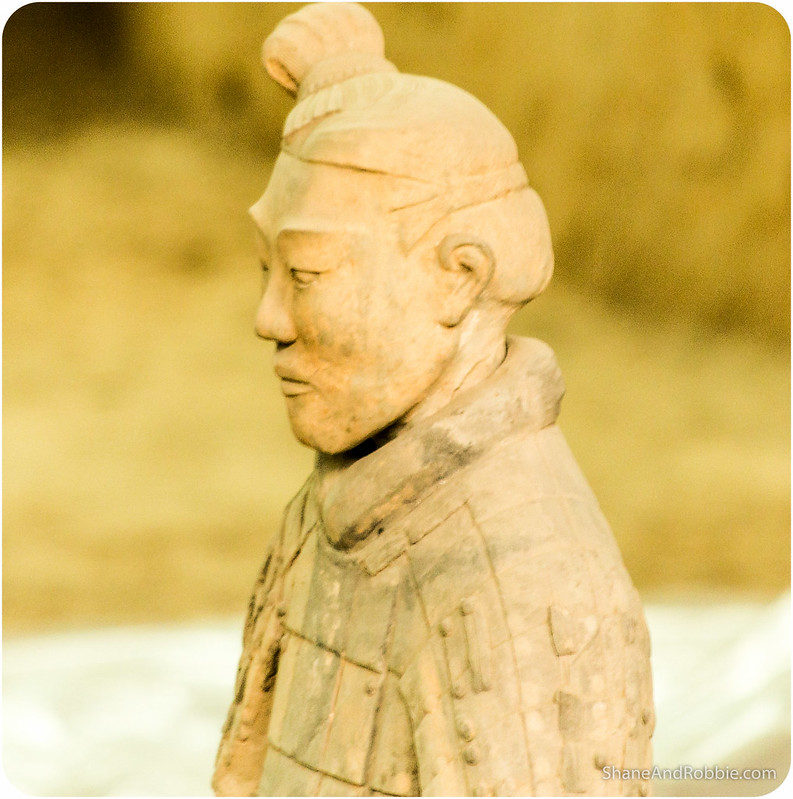 The terracotta figures were manufactured in workshops by an estimated workforce of 7,000 labourers who worked for 40 years to create the army. Heads, arms, legs, and torsos were created separately as hollow pieces, and then assembled. Eight face moulds were most likely used, with clay added after assembly to provide individual facial features. 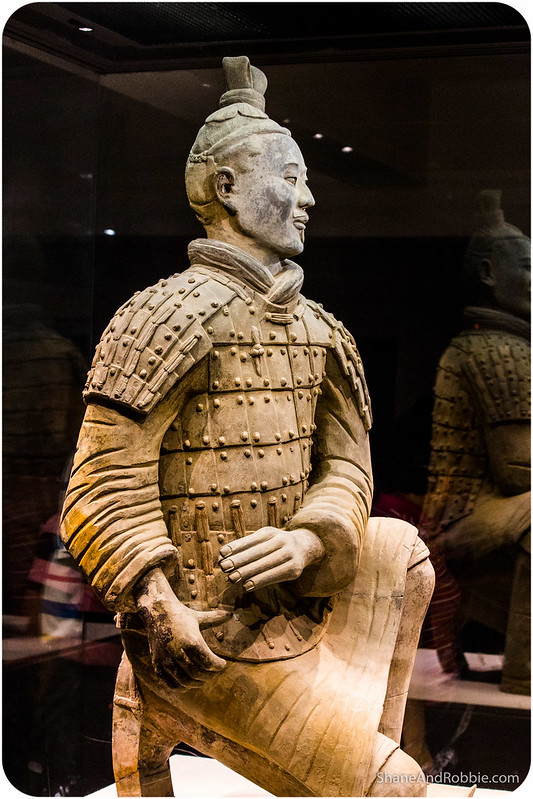 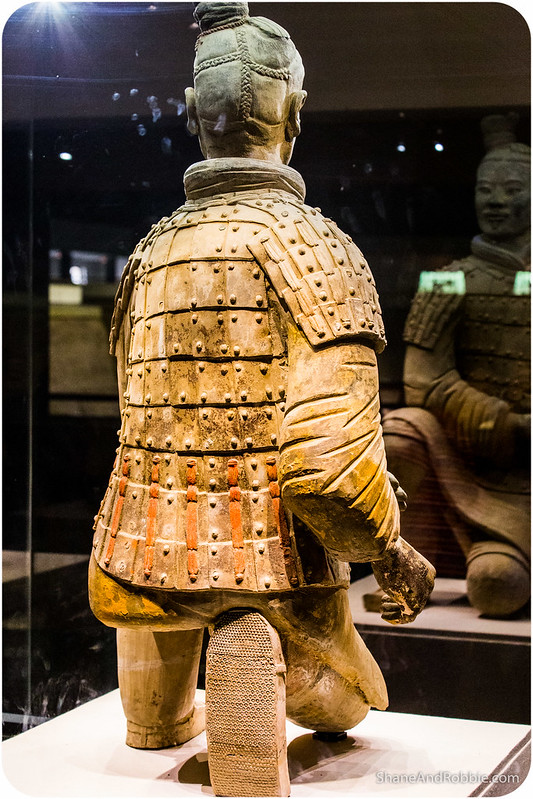 In those times of tight imperial control, each workshop was required to inscribe its name on items produced to ensure quality control. This has aided modern historians in verifying which workshops were commandeered to make items for the terracotta army. Upon completion, the terracotta figures were placed in the pits in precise military formation according to rank and duty. 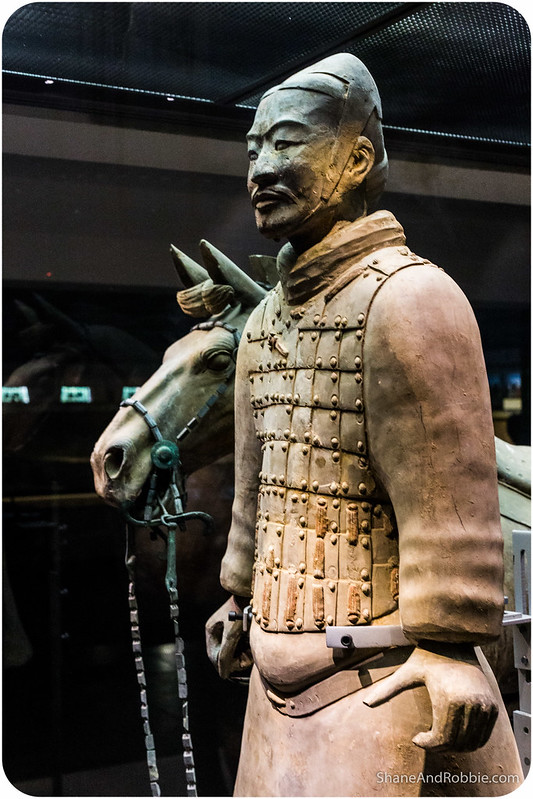 The terracotta figures are life-sized and vary in height, uniform, and hairstyle in accordance with rank and function within the army. Most originally held real weapons such as spears, swords, or crossbows; although the wooden handles of most of these weapons have long since disintegrated, the spearheads and swords are still on display. What fascinated us was that the swords discovered are still sharp; and modern scientific analyses have shown that they are coated with a 10um layer of chromium dioxide that has helped keep them rust-free for 2,000 years. No one knows how Chinese artisans were able to produce such a thin layer of coating to protect the swords, which just adds to the mystery of the Terracotta Army. 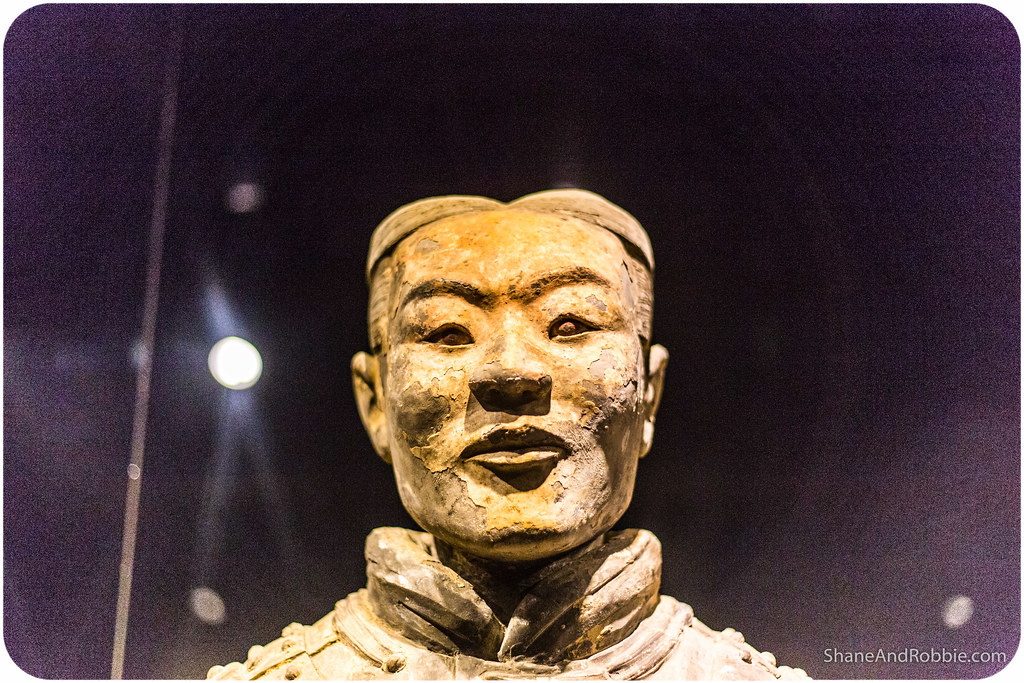 Originally, the figures were also painted with bright pigments, variously coloured pink, red, green, blue, black, brown, white and purple. In the main museum they had a figure painted to show how colourful the warriors would have once been.

We visited 3 of the unearthed pits, with Pit 1 being the biggest. Pit 1 contains the main army of more than 6,000 figures and was awe-inspiring in its size and scale. 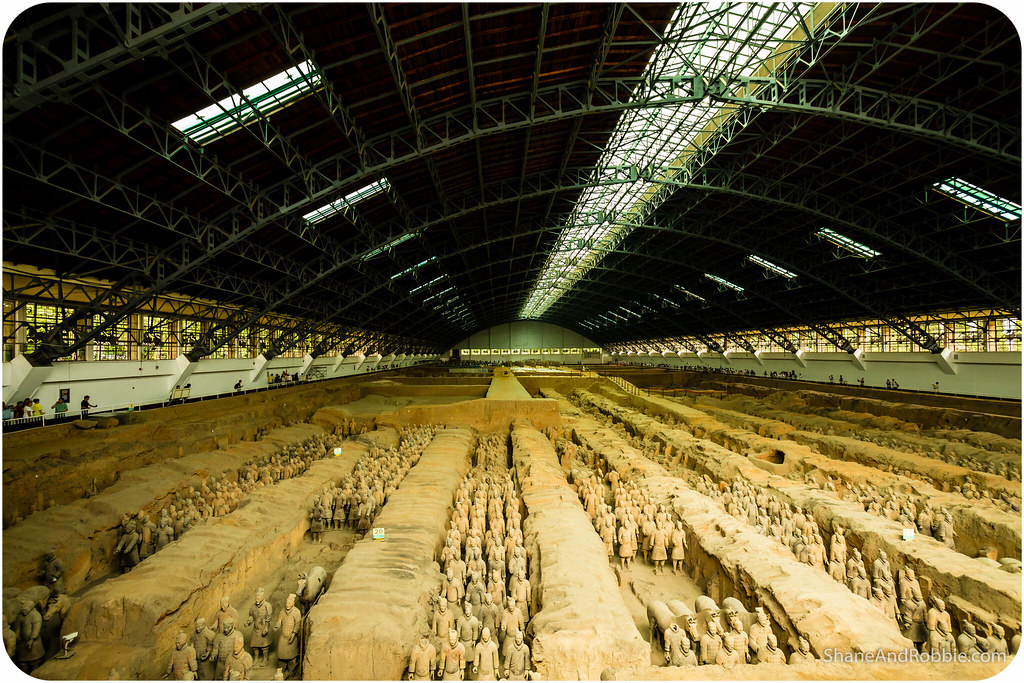 Pit 2 contained cavalry and infantry units as well as war chariots and is thought to represent a military guard. 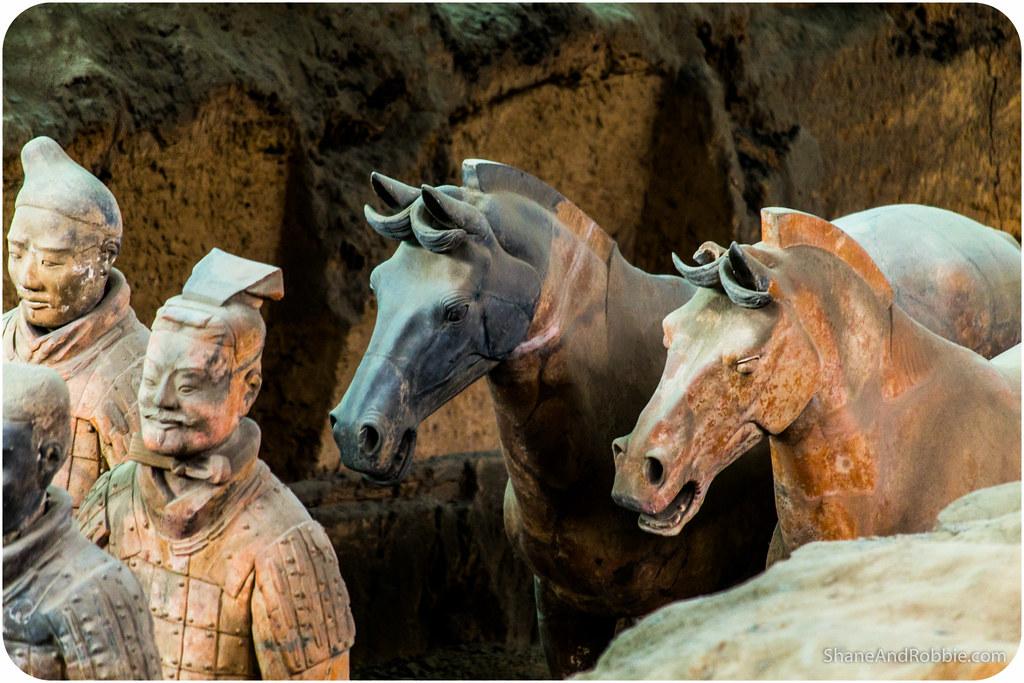 Pit 3 is the command post, containing high-ranking officers and chariots. 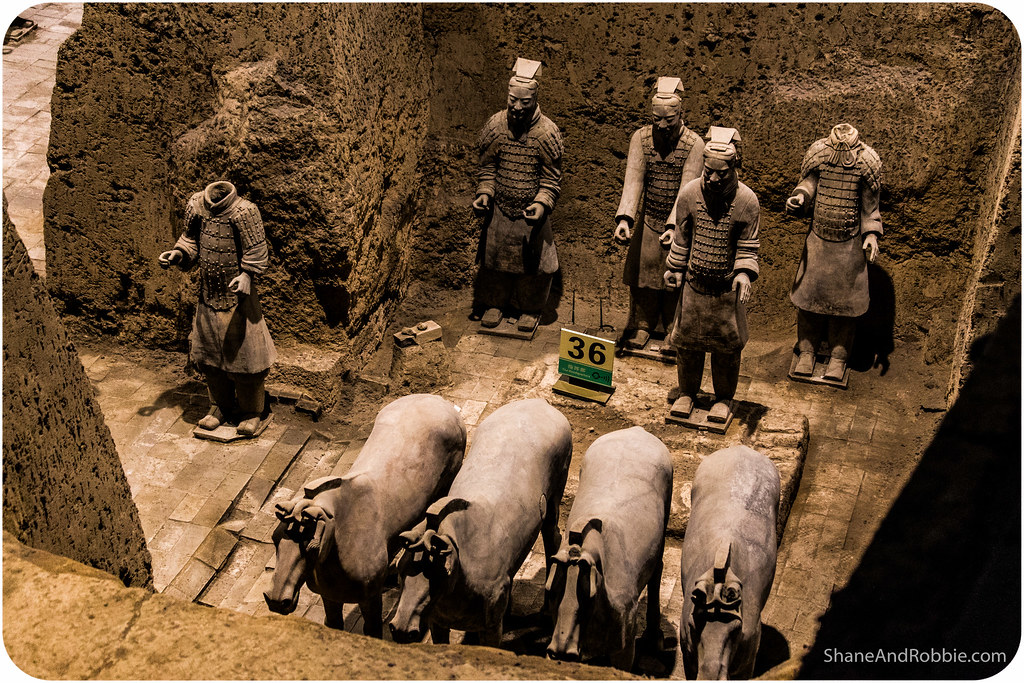 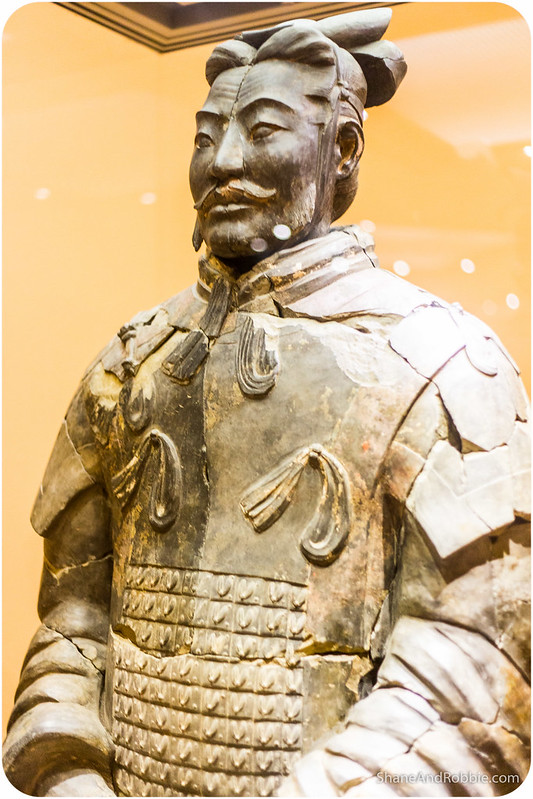 All of this was built to honour and protect one man: Emperor Qin Shi Huang (260–210 BC). Revered in China as the man who conquered the 7 Warring States and united China in 221 BC, Qin was also the first ruler to take on the title of “emperor” – a title that would continue to be borne by Chinese rulers for the next two millennia. 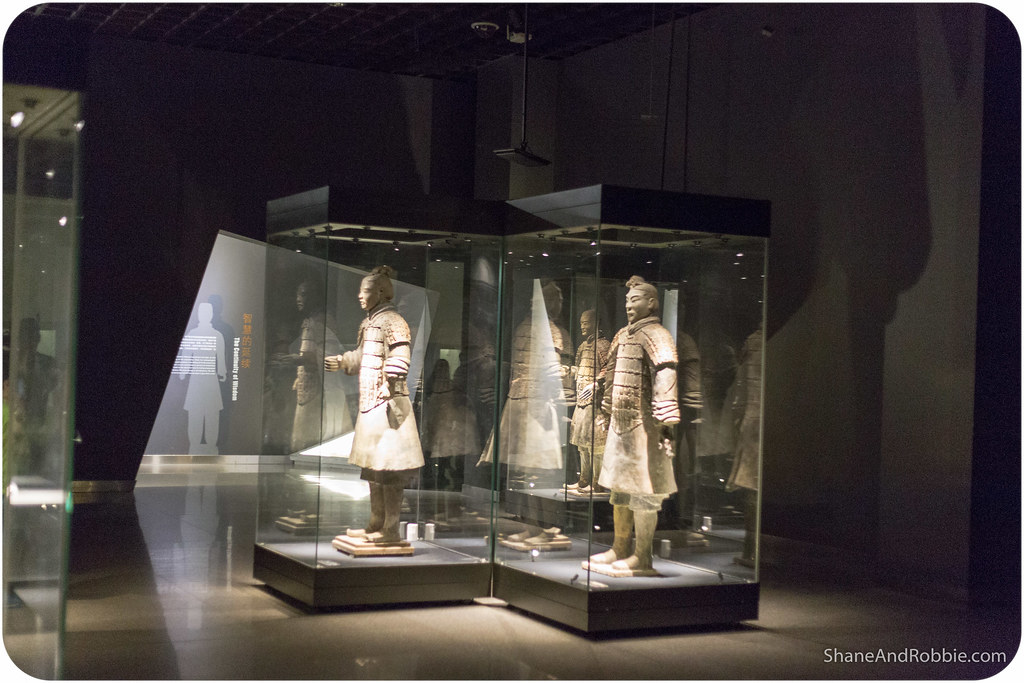 Qin Shi Huang also worked with his ministers to enact major economic and politic reforms aimed at the standardisation units of measurements such as weights and measures, currency, and the length of the axles of carts to facilitate transport on the road system. His public works projects included initiating the construction of the Great Wall of China and a massive new national road system. Perhaps most importantly, the Chinese script was unified. This newly standardised script was then made official throughout all the conquered regions, thus doing away with all the regional scripts to form one language, one communication system for all of China. These changes are acknowledged as laying the foundation for a successful, prosperous China down through the ages. He ruled until his death in 210 BC after a futile search for an elixir of immortality. 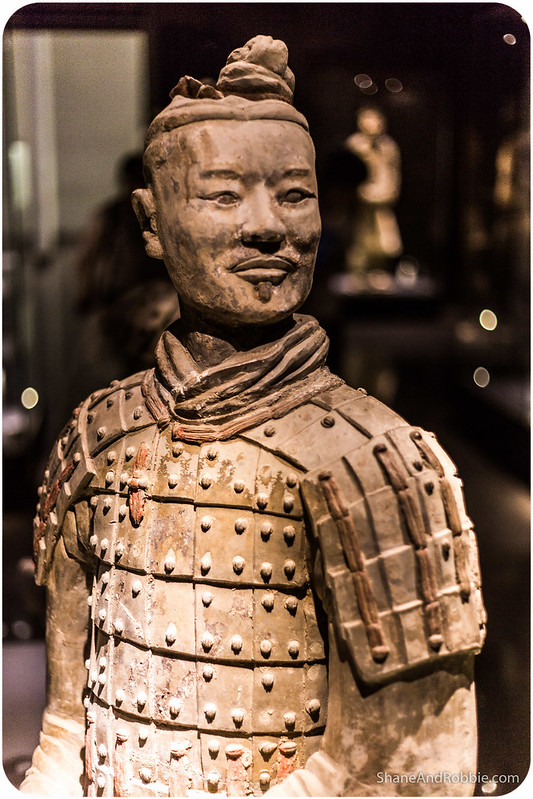 We spent most of the day in Lintong, exploring the various pits and museums that house the Terracotta Army. The Terracotta Army really is an incredible sight and left us in awe of the man that designed this incredible necropolis for himself. Even with everything we’ve seen in China so far, today stands out for us as one of the best days so far. It was truly amazing to see all those rows and rows of soldiers, still poised ready to defend their emperor, even after 2,250 years. 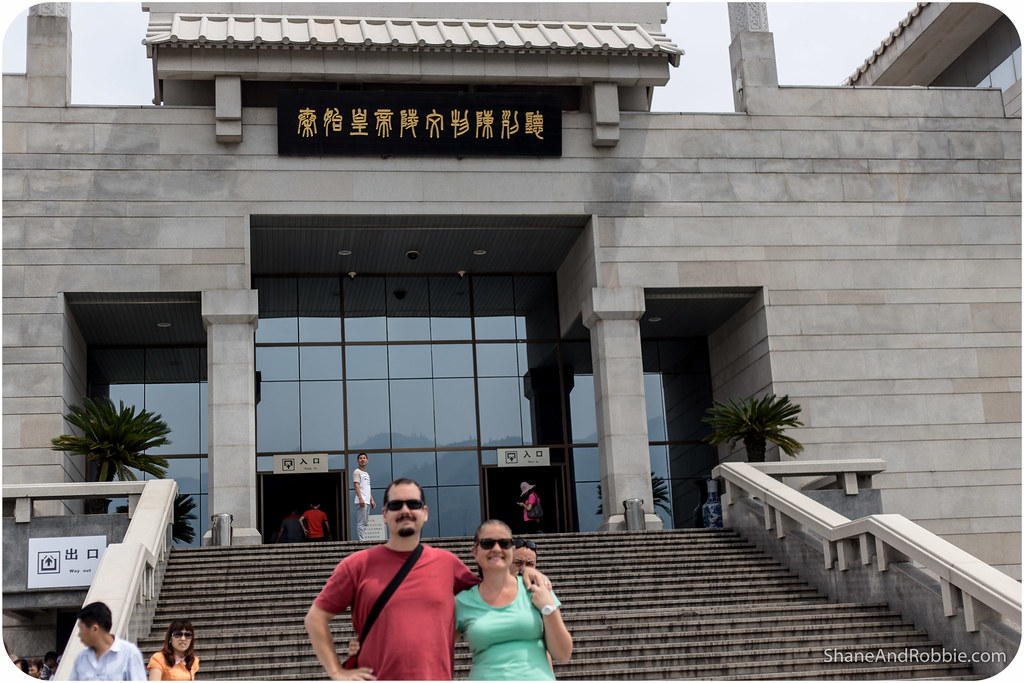