Our whirlwind tour of China is coming to an end – we just arrived in Beijing, the last city we’re visiting this time around. As the country’s capital, Beijing is also one of the biggest cities in China. With 24 million inhabitants, 7 ring roads, and countless high-rises, this is certainly one of the biggest cities we’ve ever seen! We’re here for 4 days to explore the historical sites in and around Beijing, but after our flight in from Xi’an this afternoon, all we had time for tonight was a driving tour through the city and an awesome dinner of Beijing’s famous Peking duck.

Our day started with a quick visit to Xi’an’s Dajianfu Temple and its accompanying Wild Goose Pagoda. Built in 707AD to honour Emperor Gaozong, the temple was one of the most important Buddhist temples in Xi’an for many centuries. The pagoda was used to store sacred Buddhist texts, brought to Xi’an via the Silk Road for study and translation into Chinese. 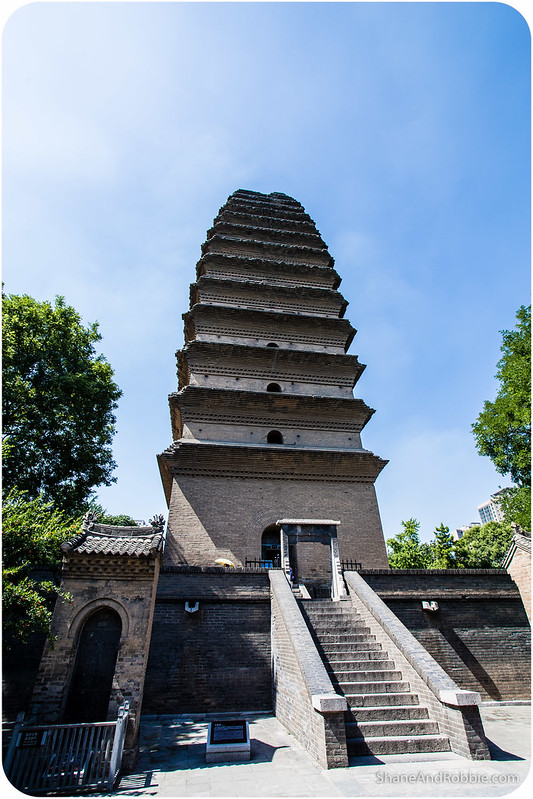 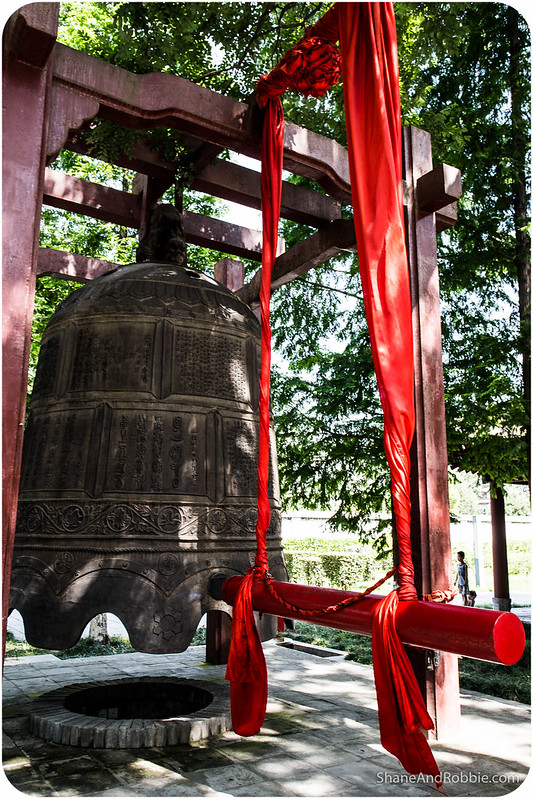 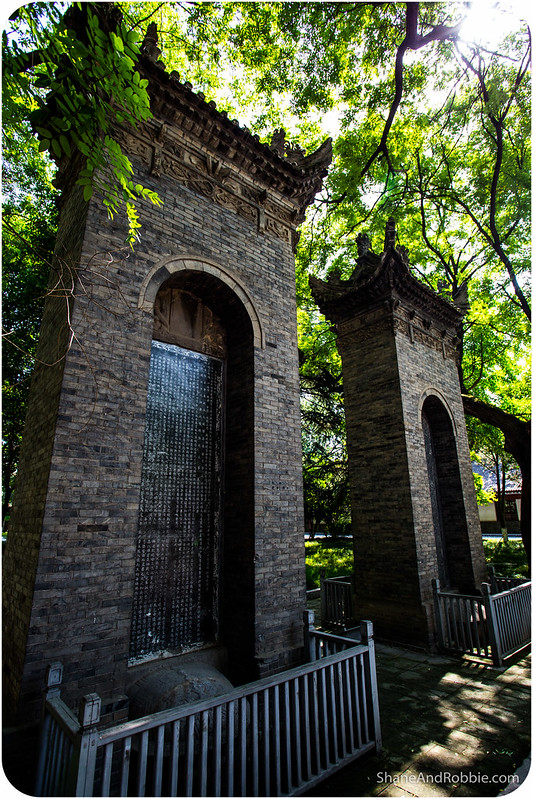 Like many temples in China, Dajianfu is no longer used for religious rites* and the grounds of this once flourishing temple are now just used as a public park. It’s a nice enough park, and made for a nice morning walk before we headed back out of Xi’an to the airport.
*With the ascension of the Chinese Communist Party in 1949 many Taoist, Confucian and Buddhist temples around China were destroyed and religion deemed “unnecessary”. As a consequence of this, most Chinese are proclaimed atheists – only about 30% of the population adheres to a faith, though superstitions still seem to reign supreme. 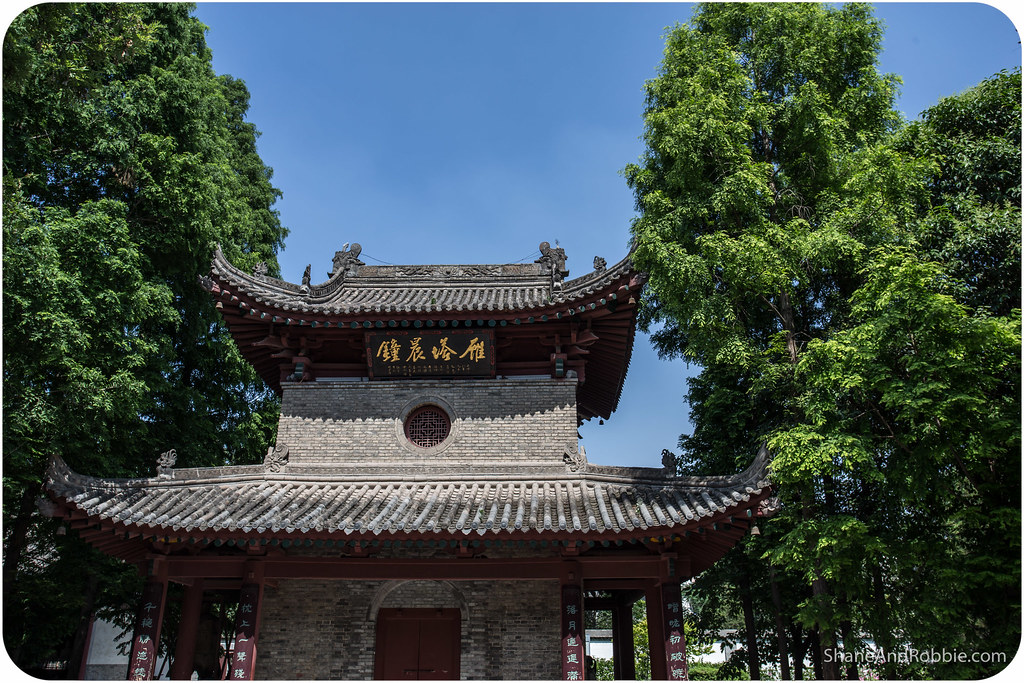 After an uneventful flight (no one smoked on board this time!), we arrived in Beijing and were taken to our hotel to freshen up before dinner. The drive from the airport to the city took 2 hours, which doesn’t seem too bad until you realise it was a 30km drive! The traffic in this town in legendary (not in a good way either) – we’ve been hearing about how bad Beijing traffic is from our first day in China. Despite being psychologically prepared for it, however, we were still shocked by the sheer number of cars jamming up the highways – especially given it was Sunday afternoon! Apparently there are 6 million cars registered in Beijing, and on weekends, they’re all allowed out to drive*.
*To reduce traffic congestion and minimise air pollution on weekdays they have a system that excludes cars whose number plates end in different numbers on different days of the week. 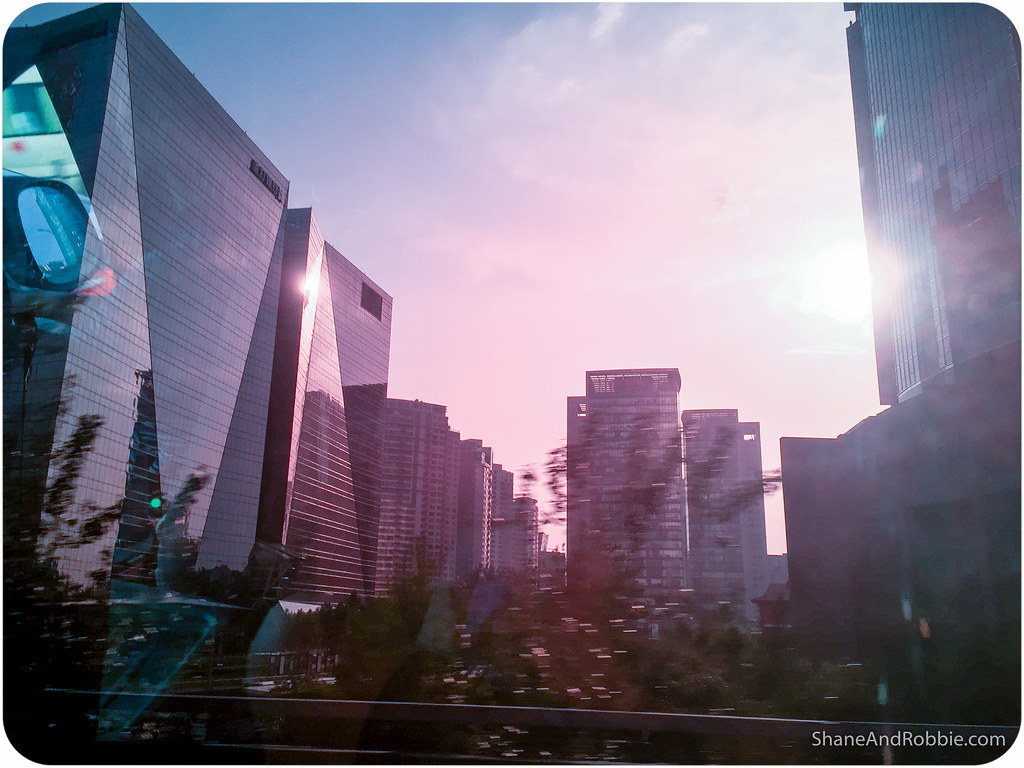 Besides the traffic we also couldn’t help but notice all the high rises and the atrocious colour of the “sky”. The high rises make sense given all the people, but the air pollution was beyond anything we had expected. Knowing air quality was an issue in China we’ve brought some disposable face masks with us to wear when it’s bad. So far we’ve lucky though, even in big cities like Chengdu and Chonqing the air quality wasn’t too bad. In Beijing today, however, readings were up around 170 (i.e. well into the “red zone”), so on went the masks.

We read a lot about the issues with air quality and pollution before coming over here, but coming from Aus where the air is clean and fresh, today was a shock. How do all these poor people handle it*?!
*From what we’ve been able to gather, they don’t cope very well at all; China has one of the highest incidences of lung and throat cancer in the world. No doubt the ubiquitous Chinese habit of cigarette smoking contributes largely to this, but the air pollution can’t help. We read some studies that showed the air pollution along China’s eastern sea-board is so bad that it’s affecting air quality as far away as Canada and the USA! 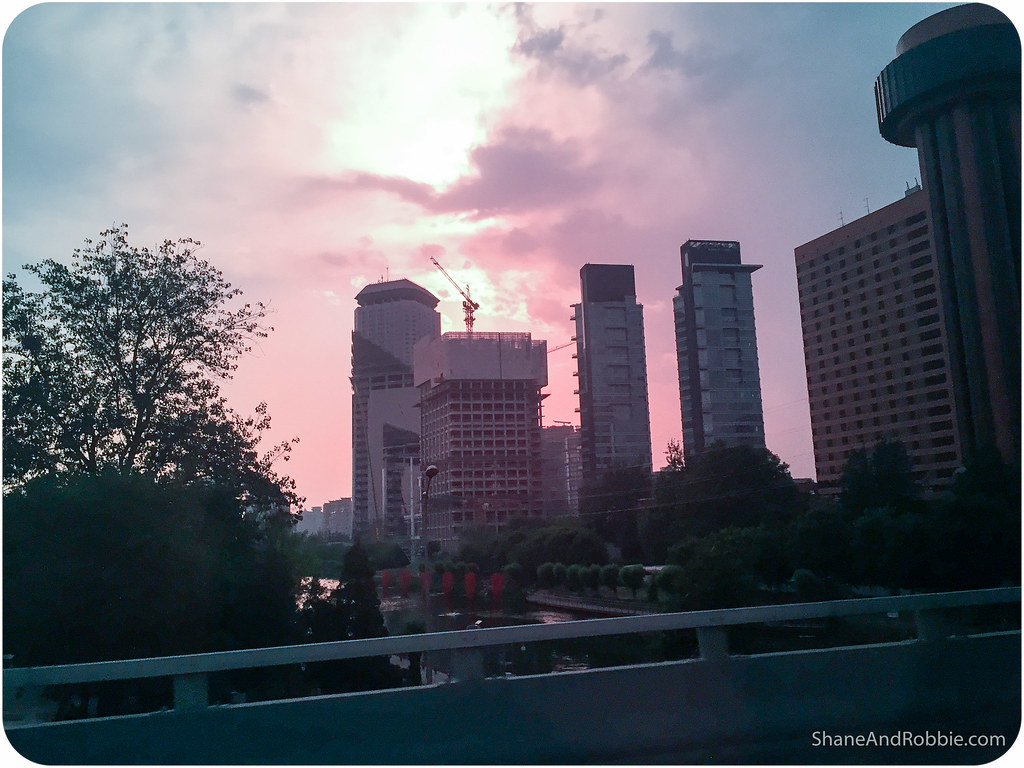 Beijing, formerly known as Peking, is the capital of the People’s Republic of China and one of the busiest and most populous cities in the world. It is the centre of government in China; home to the headquarters of most of China’s largest state-owned companies; and a major transport hub for the country (Beijing Capital International Airport is the second busiest in the world by passenger traffic). It’s also one of the oldest cities in the world, with a history that stretches back 3 millennia.

Beijing has been this political centre of the country for almost 1,000 years; it’s been home to hundreds of emperors and is renowned for its opulent palaces, temples, parks and gardens, tombs, walls, and gates. Beijing is home to no fewer than 6 UNESCO World Heritage Sites: the Forbidden City, the Temple of Heaven, the Summer Palace, the Ming Tombs, the Great Wall, and the Grand Canal. We’re not going to get to see them all, but we’ll try to fit as many as we can into the next few days! Starting tomorrow with one of the world’s most famous walls…