SHANE CELEBRATES HIS BIRTHDAY ON THE AMAZING GREAT WALL OF CHINA!

Today is Shane’s birthday and he got to celebrate it by walking along the Great Wall of China. It was so cool! Actually it was bloody hot – summer is in full swing here and temperatures got up around 36C today. Up on top of the Great Wall, the sun beating down on us mercilessly, we almost baked! But it was still really, really awesome – it’s not often you get to touch a living piece of history like that (and I don’t mean Shane)! 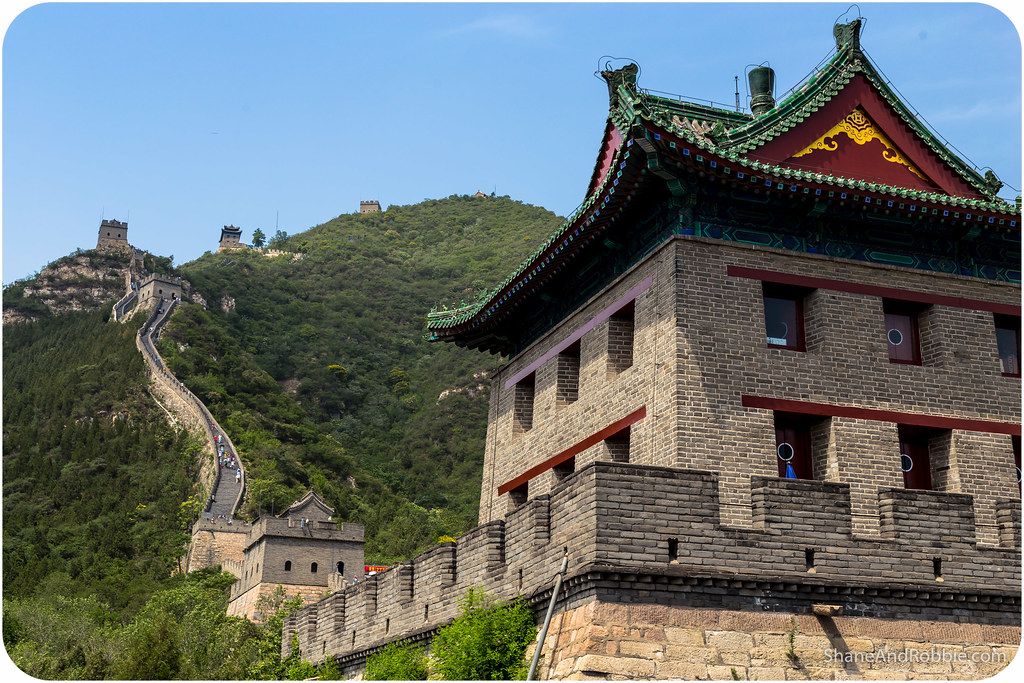 The Great Wall of China is a 6,259km long fortification made of stone, brick, tamped earth, wood, and granite, built along an east-to-west line across the historical northern borders of China primarily to protect the Chinese empire against raids by the Mongols, Manchurians and other nomadic groups of the Eurasian Steppe. The defensive nature of the wall is apparent even today with guard houses built every kilometre or so. 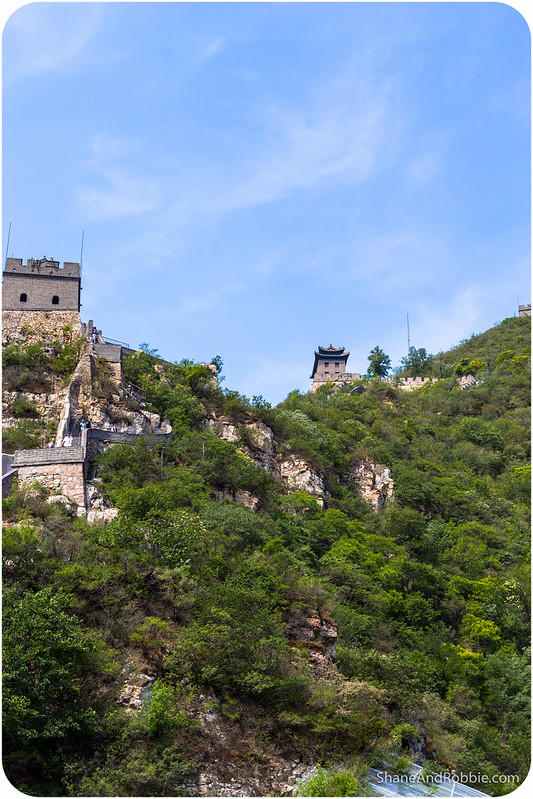 The Great Wall functioned to control China’s borders, limiting immigration into the empire and controlling entry from outsiders. As merchant caravans had to enter via one of the gates, the wall also allowed taxes to be levied on goods being transported and and out of China via the Silk Road. Even though the Chinese empire later grew beyond the Great Wall, its physical presence also did much to help define the Chinese sense of nationhood. 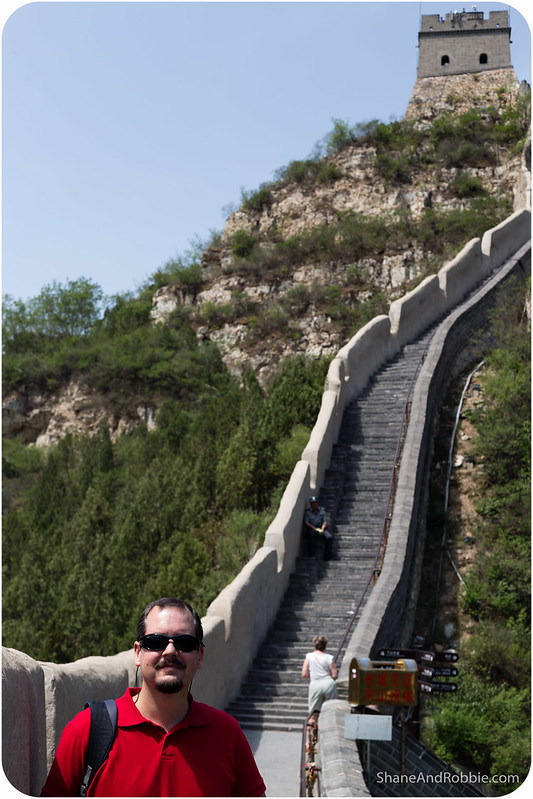 We learnt today that the Great Wall wasn’t built all at once – sections of it were constructed as early as 600BC; other parts were added as late as 1500AD. The initial vision to join all the smaller pieces of the wall into one continuous defensive barrier came from Emperor Qin Shihuang (of Terracotta Army fame) in 220BC; then, over the centuries the wall was repeatedly reinforced, added to, and enlarged. 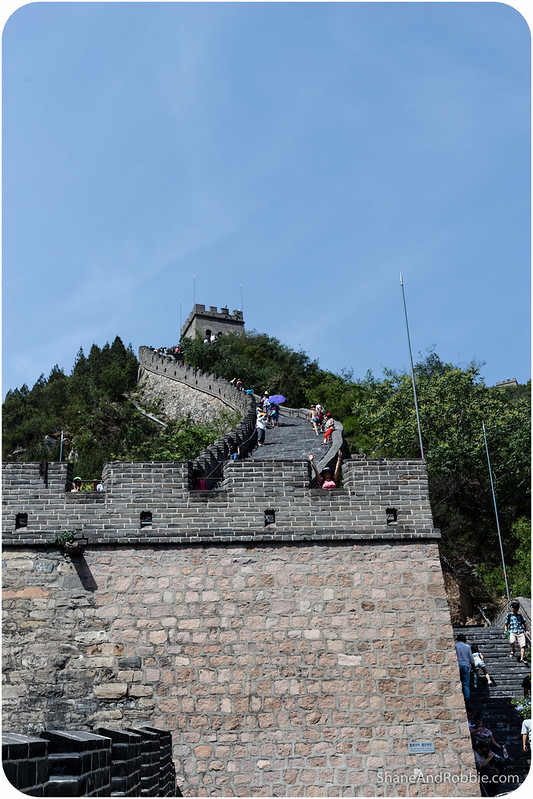 The human cost of the construction is unknown, but it has been estimated that hundreds of thousands, if not up to a million, workers died building the wall (many of them political prisoners and captured slaves). Some section of the wall even have the bones of those that died working on the wall built into the very structure. 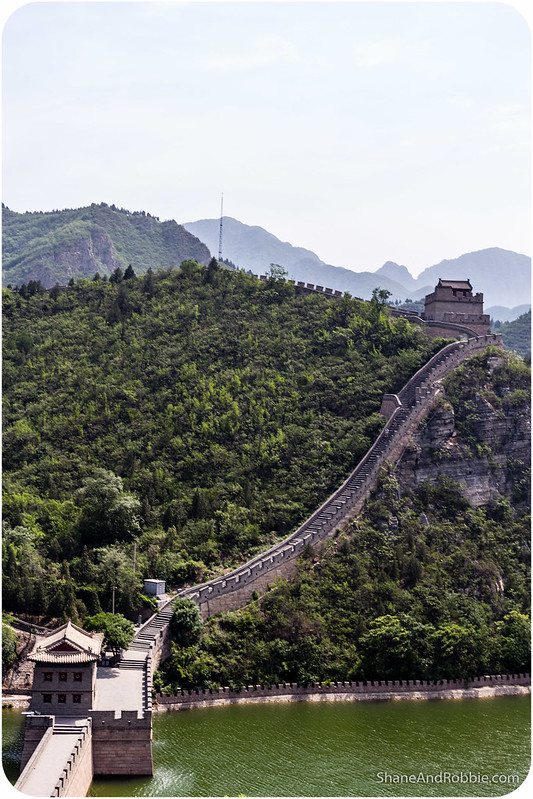 Despite the epic proportions of the Great Wall, it was ultimately ineffective at turning back invaders from the north – both the Mongols and the Manchurians invaded China over successive centuries. Genghis Khan is famously quoted as saying, “A wall is only as good as those that defend it”. Now that’s a damning review of the great Chinese imperial army! 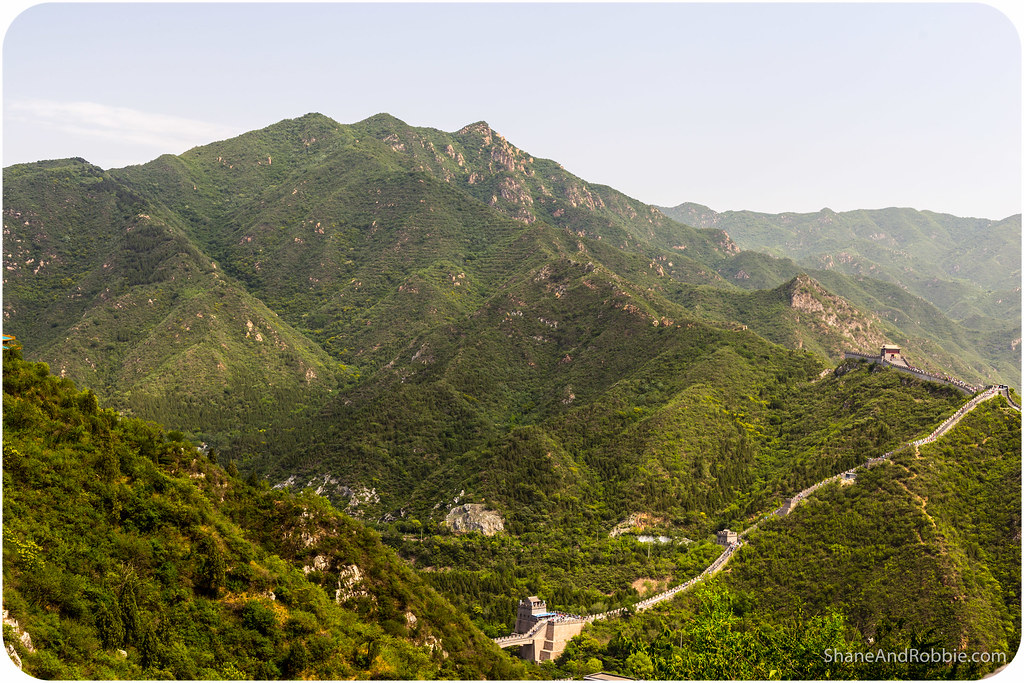 The section of the wall we went to see was the Juyongguan section, which is just 60km (but 2 hours’ drive) north of Beijing. This section was very important as it was used to defend the ancient city of Beijing. Today this section of the wall is one of the most visited sites as it’s one of the best preserved parts of the structure. The Great Wall was built out of available materials: in the deserts the wall was made from compacted sand; in the far west it was constructed from mud and straw; here in the north-east of the country, where the ground is rocky, the wall was built from granite. This means that today, more than 2 millennia after construction began, many of parts of the Great Wall have been eroded by time and the elements. The solid granite of this section of the wall, however, has endured. 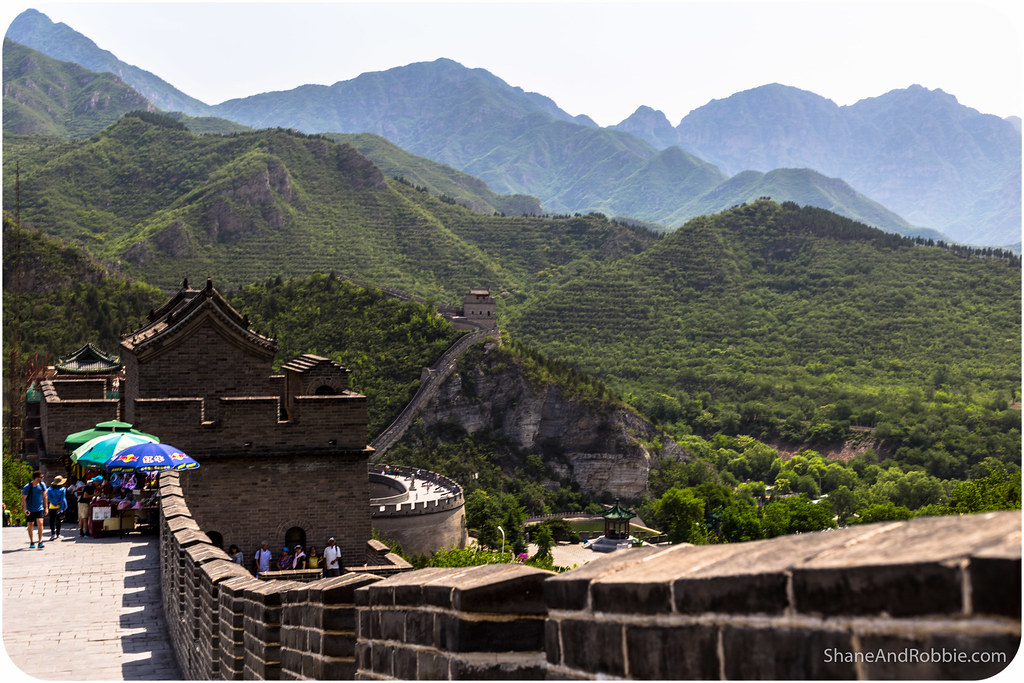 It was amazing, thinking back on 2,000 years of history as we climbed up some of the steeper sections of the wall. Imagining the countless steps that have been walked along the wall over the centuries by construction workers, then guards posted on the wall, and most recently, by hordes of tourists like us! 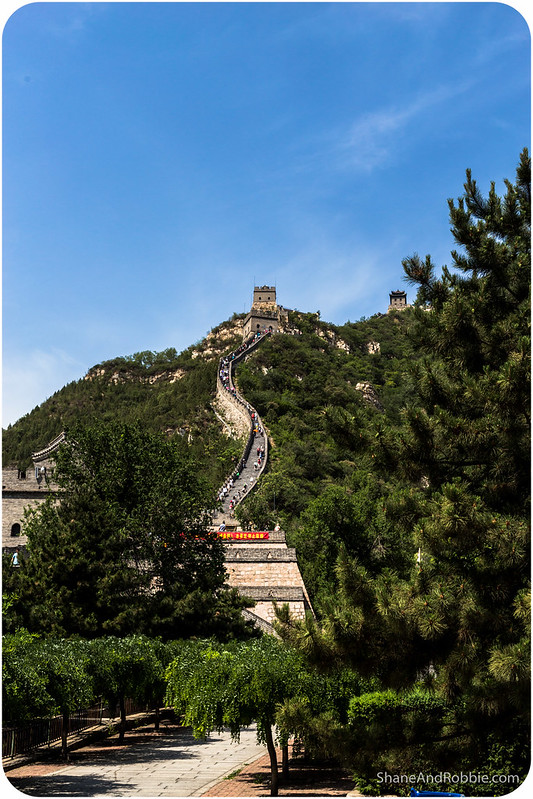 We walked about 3km of the wall before the heat forced us to turn back. Most of the section we walked was steep, which made for a strenuous walk, but was worth it for the views. The area around Beijing’s north is very hilly, and the views across the forested and rocky slopes were magnificent. We were also incredibly lucky today as the prevailing winds blew most of the city’s smog away from us; not only did we have reasonable air quality today, but we even got to see blue skies! 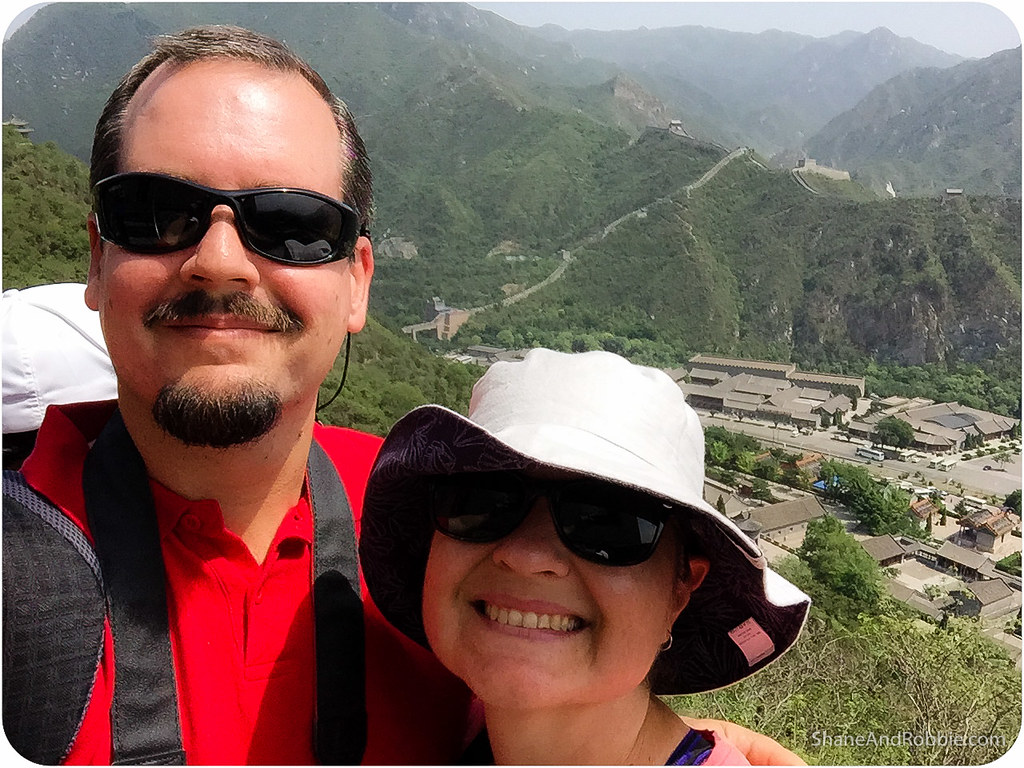 It was a wonderful morning – a real highlight of the trip so far for us. And we were hoping it would get even better after lunch as we had an afternoon visit to the Ming Tombs booked. Unfortunately the Ming Tombs were as disappointing as the Great wall was magnificent. There was nothing down there but an empty bunker with concrete walls and (bad) reproductions of the imperial burial coffins themselves. We thought it was a joke at first, but it seems the Chinese penchant for replacing natural beauty and archaeological wonder with fake, tacky and nasty had struck again! 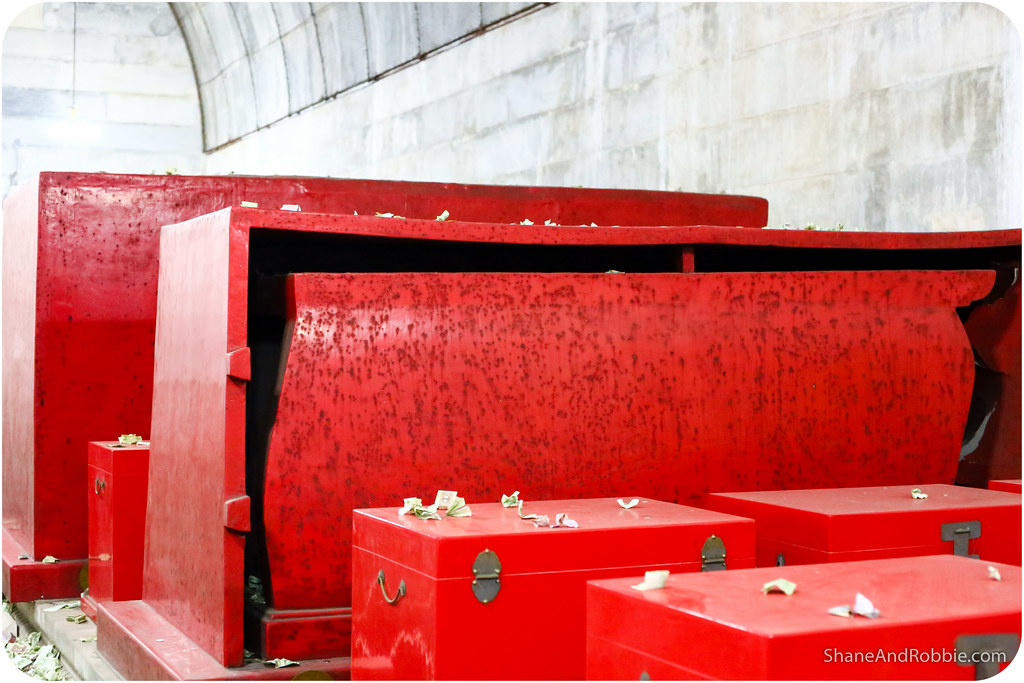 The Ming Tombs were on our list of places to visit as this area houses 13 imperial tombs form the Ming Dynasty (1368-1644). We knew that only one of the tombs has been fully excavated and is open to the public: the Dingling Tomb, which is the mausoleum for Emperor Wanli and his 2 empresses. So this is the tomb we went to visit. 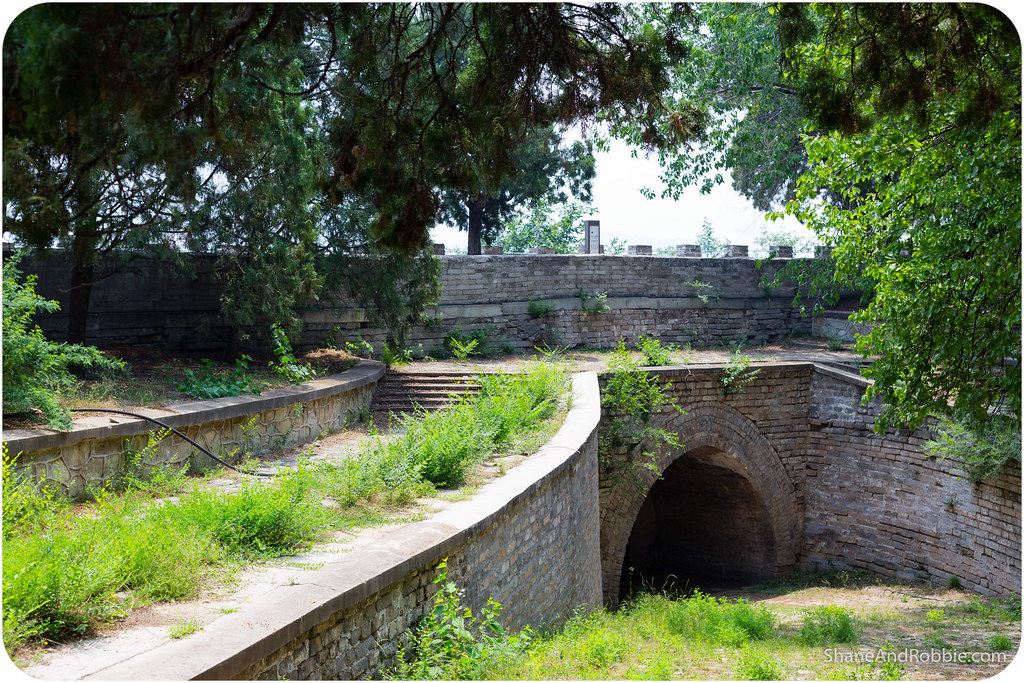 The excavation of Dingling began in 1956 and revealed an intact tomb, containing sandalwood boxes filled with thousands of items of silk, textiles, wood, gold, precious jewels, and porcelain. In the central chamber there were sandalwood coffins containing the skeletons of the Wanli Emperor and his 2 empresses. Unfortunately however, the tomb and its contents were treated in ways that defies logic, with the large amount of silk and other textiles simply piled into a storage room that leaked; wooden artefacts were stored in large sheds without adequate protection; and many of the jewellery and gold simply “disappeared”. Even worse, during the Cultural Revolution of the late 1960s and early 1970s, the Dingling tomb was stormed by Red Guards and the remains of the Wanli Emperor and his empresses burned. Many other artefacts were also destroyed in the fervour. As a result all that’s left today is replicas. As lovers of history, visiting the Ming Tombs was almost traumatising, especially as the tragic history of the tombs was revealed to us by our guide. 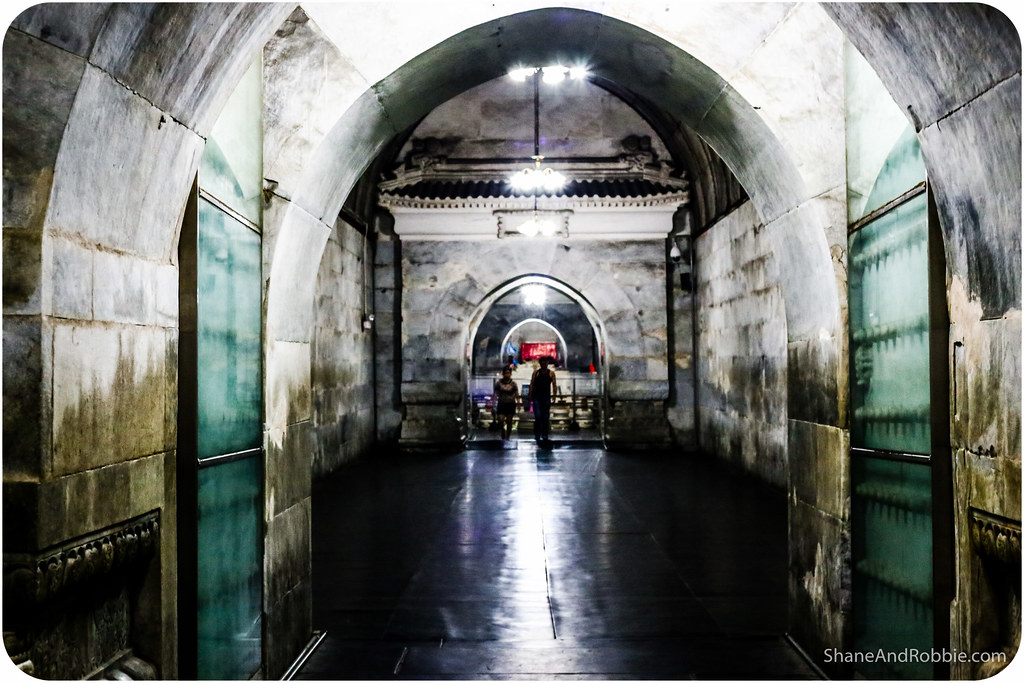 The destruction wrought by the Cultural Revolution is incomprehensible to us. We’ve seen so many sites around China that used to house temples and palaces, that are today just soulless gardens and parks. For a nation to lose so many of its cultural and historical sites so quickly and violently is shocking. It leaves us wondering what the long-term consequences of the Cultural Revolution really are – what changes has that decade wrought on the national psyche here in China? How different might modern China be if the changes of the 20th century hadn’t meant annihilation of so much history and the severing of so many links to the past? 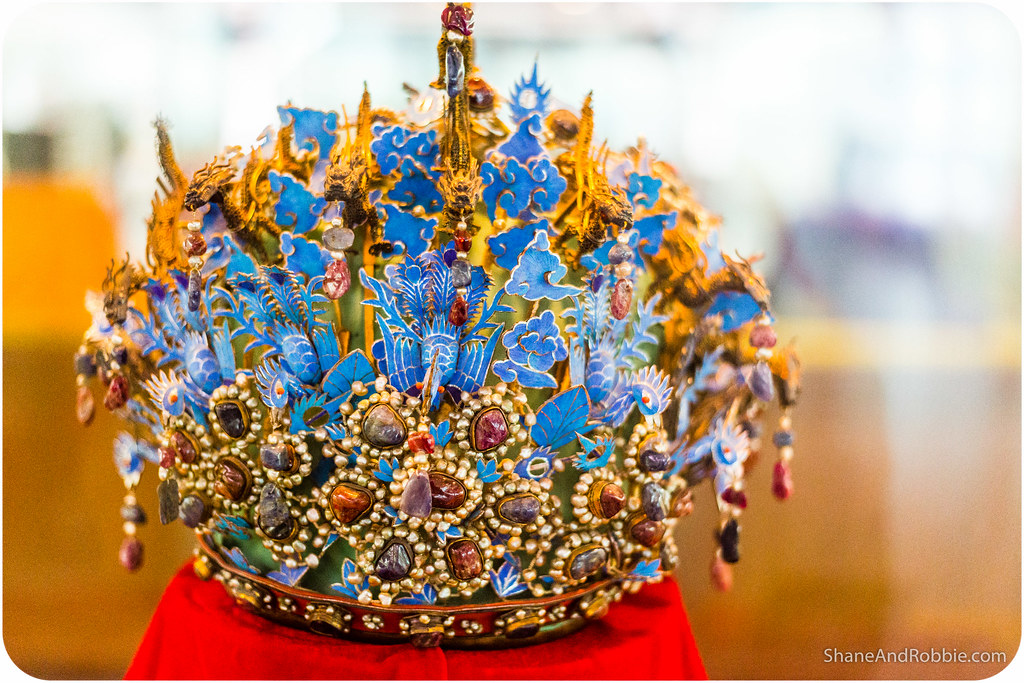 Certainly the Ming Tombs didn’t impress us in the way we expected, but they did make us think about China’s history. In that sense they were well worth the visit and made an interesting counter-point to the morning’s trip to the Great Wall. There is so much history here – layers and layers of history, all interwoven with politics to create a fascinating tapestry that is just so interesting, and just so uniquely Chinese. 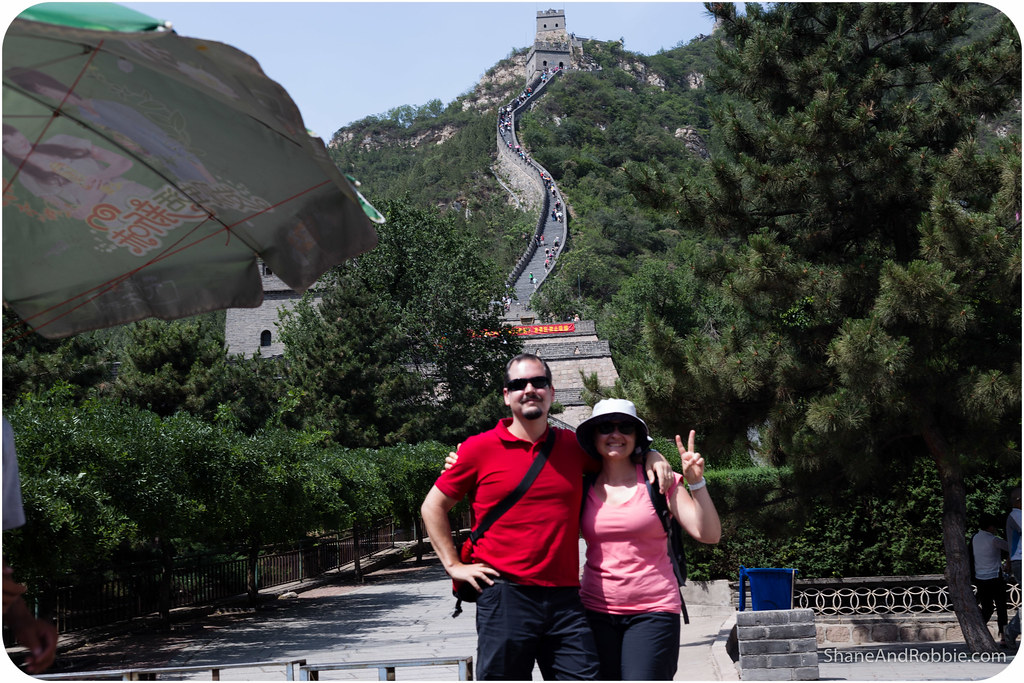