Our sightseeing adventures today focussed on some of Beijing’s most iconic sights: Tiananmen Square, the Forbidden City, and the Temple of Heaven. Clustered together at the geographical centre of this great city, these sites also represent the cultural and psychological centre of China. The size and grandeur of these landmarks left us awed, whilst the heat and crowds* left us overwhelmed and more than a little baked. Still, we were very lucky because strong winds kept the smog away again today and we got to enjoy Beijing at its blue-skied best!
*Tiananmen Square and the Forbidden City are China’s most visited tourist attractions, with 140 million domestic Chinese visitors and 5 million international visitors flocking here every year. Do the maths – that’s almost 400,000 people EVERY SINGLE DAY! 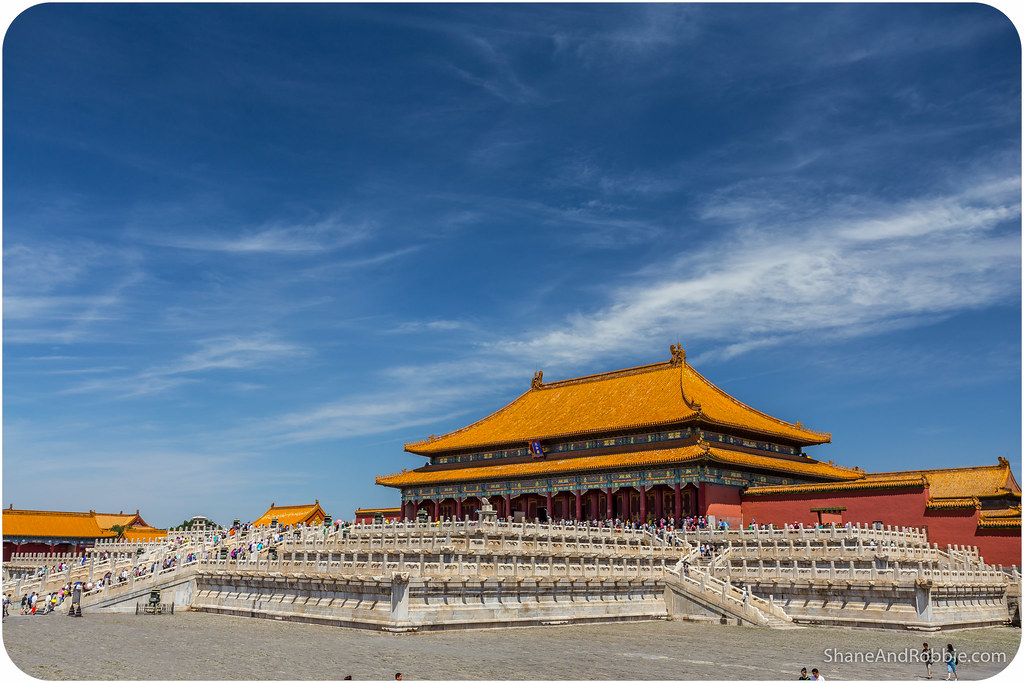 We arrived first into Tiananmen Square and spent 1 few minutes just standing there with our mouths hanging open, marvelling at its size. Designed to accommodate 1,000,000 people the square measures 880m x 500m and covers and area of 109 acres. This immense public square is named after the Tiananmen Gate (i.e. the Gate of Heavenly Peace), which separates the square from the Forbidden City and marks the southern entry into the palace complex. Built in 1417 the Tiananmen Gate marked the line that common people could not cross – only royalty and aristocrats were allowed beyond. 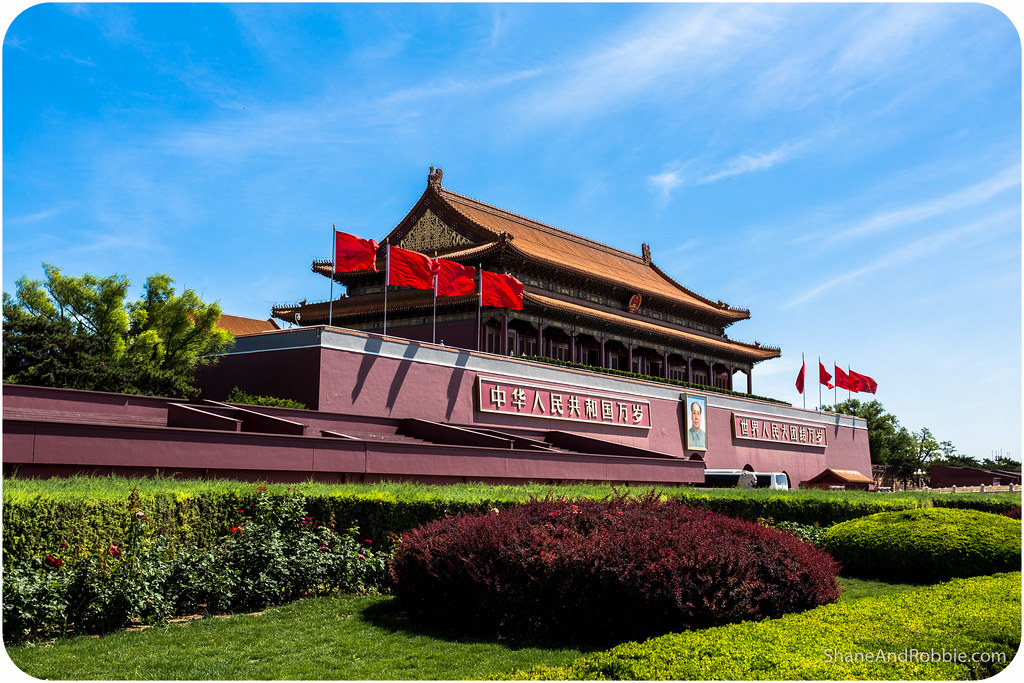 Originally much smaller the square was enlarged in the 1950s after the Chinese Communist Party came into power. They destroyed numerous flanking buildings to create what was designed to be the greatest square in the world. Concomitantly the Great Hall of the People* and the National Museum of China were built on the western and eastern sides of the square. These imposing Stalinist buildings reminded us so much of some of the hideous “official” structures we saw in Russia and Romania that we immediately knew when they were built and under what influence!
*Effectively China’s parliament house. 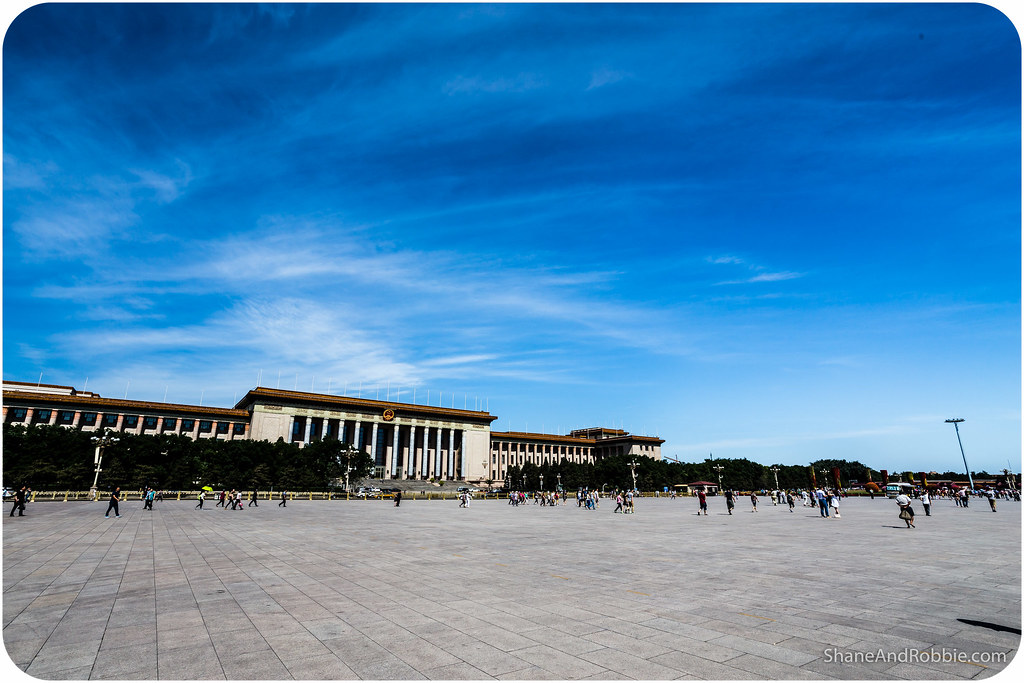 The granite Monument to the People’s Heroes lies at the centre of the square. Built in 1952, this monument is dedicated to Chinese “freedom fighters” who died during the unrest and civil war of the 1930s and 1940s, and whose sacrifice ultimately helped the Chinese Communist Party ascend to power. 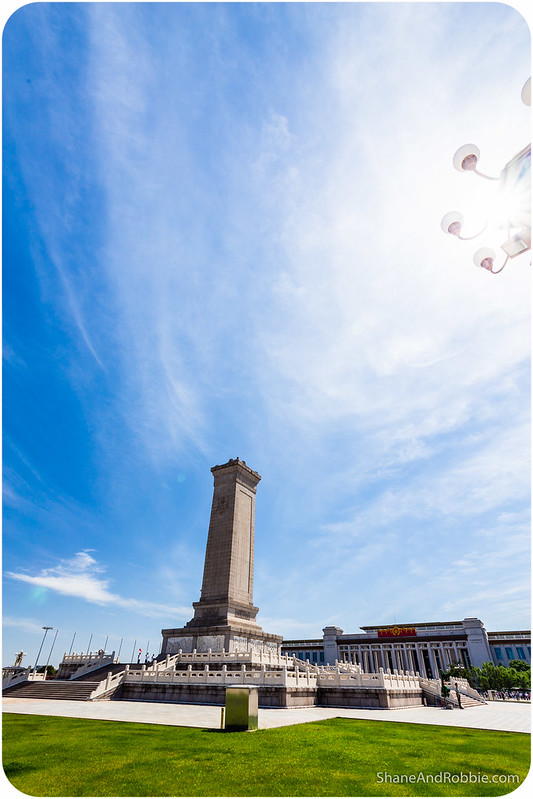 The year after Chairman Mao’s death in 1976, a mausoleum was built on the south side of the square. We didn’t join the 3 hour long queue to see for ourselves, but were told by our guide that Chairman Mao’s body lies inside, in a crystal coffin surrounded by fresh bouquets of flowers. The queue for the mausoleum, combined with the enormous portrait of Chairman Mao at the northern end of the square certainly helped cement in our minds how alive and well the “Cult of Mao” is – even after all these years he’s spoken of reverently and with great respect. We’ve heard some criticism of some of his policies (e.g. the Great Leap Forward, the Cultural Revolution, Mao’s advocacy of “The Hero Mother” whose duty it was to bear as many children as possible “for China”, etc), but generally everything that’s said of Chairman Mao is glowingly positive.

Trees line the east and west edges of Tiananmen Square, but the square itself was an open, treeless expanse of grey concrete. Very intimidating! Even more intimidating were all the security cameras and policemen patrolling the square. We were stopped a couple of times and asked brusquely for our passports. Luckily our guide intervened both times and (presumably – not speaking Chinese we really have no idea what was said) explained our purpose. It seems 2 white people on their own are rare enough that we warrant some suspicion (most tourists here, regardless of country of origin, travel in large packs)! 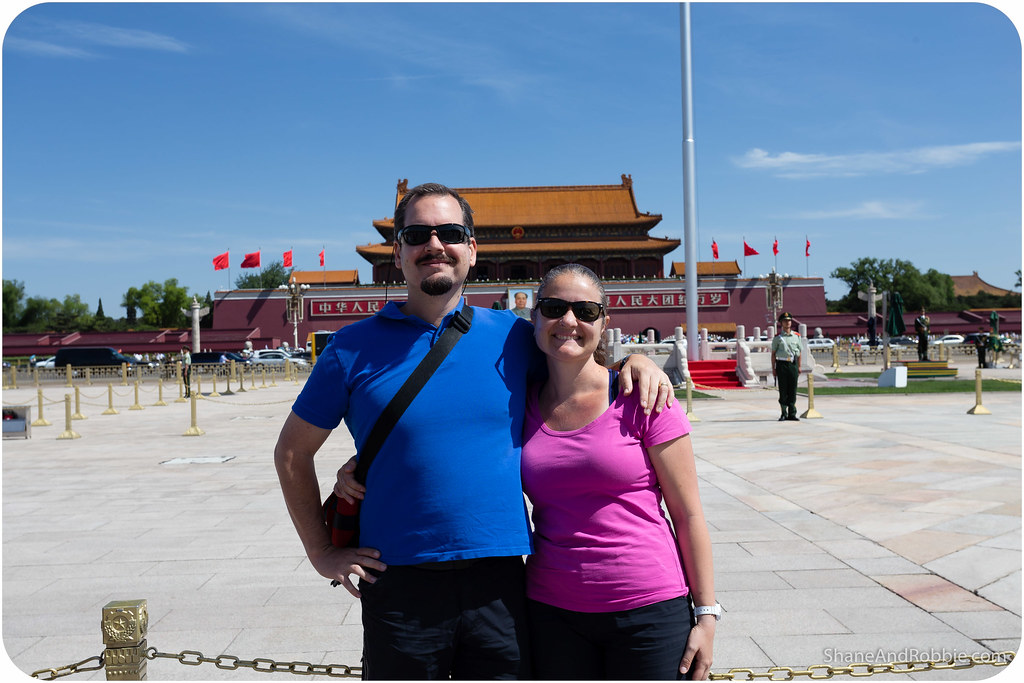 Thoroughly awed we moved from Tiananmen square, through the Gate of Heavenly Peace and into the Forbidden City. 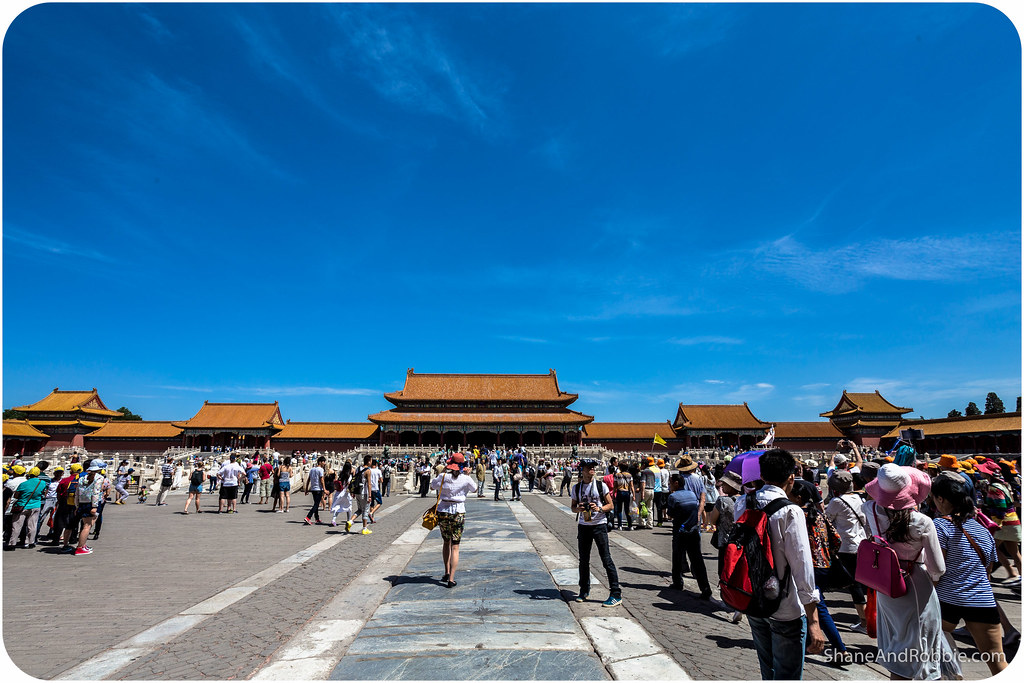 Seat of supreme power for over 5 centuries (1416-1911), the Forbidden City is the world’s largest palace complex and covers 74 hectares. Surrounded by a 52-meter-wide moat and a 10-meter-high wall are more than 8,700 rooms. The wall has a gate on each side, one for each direction of the compass; the distance between the northern and southern gates is 960m, while the distance between the eastern and western gates is 750m. In case you missed it: that’s BIG! 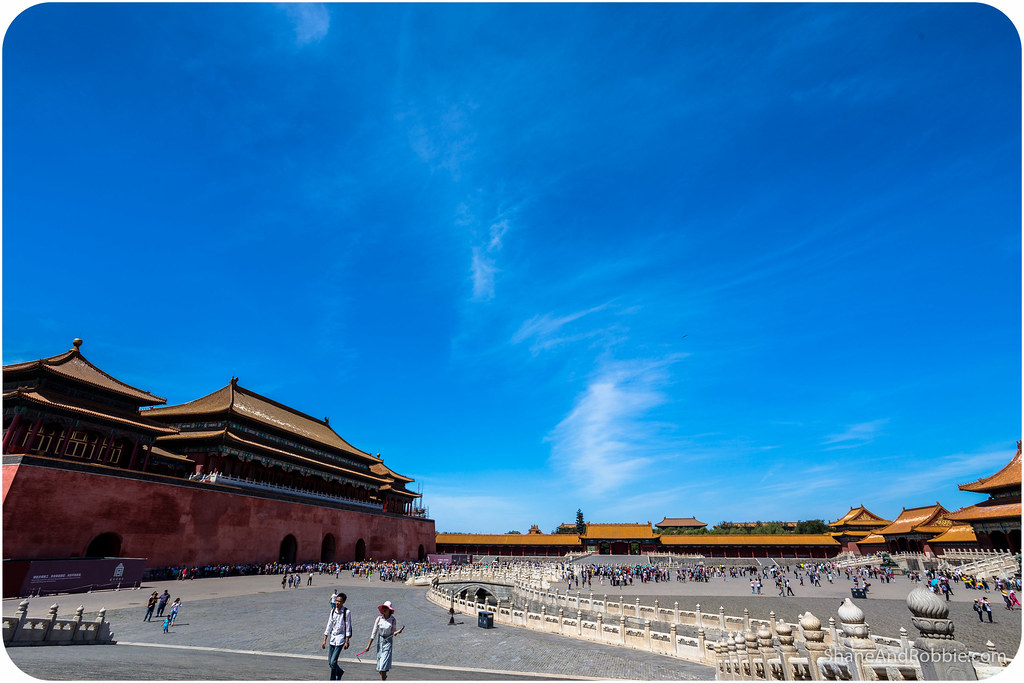 As the royal residences of the emperors of the Ming and Qing dynasties the Forbidden City was the centre of state power in feudal China. Over a period of 505 years 14 Ming and 10 Qing emperors were enthroned here. The final imperial resident of the Forbidden City was driven out in 1924 (a story famously told in the 1987 movie “The Last Emperor”) when China’s 2,250 years of history as a united, feudal state officially ended. 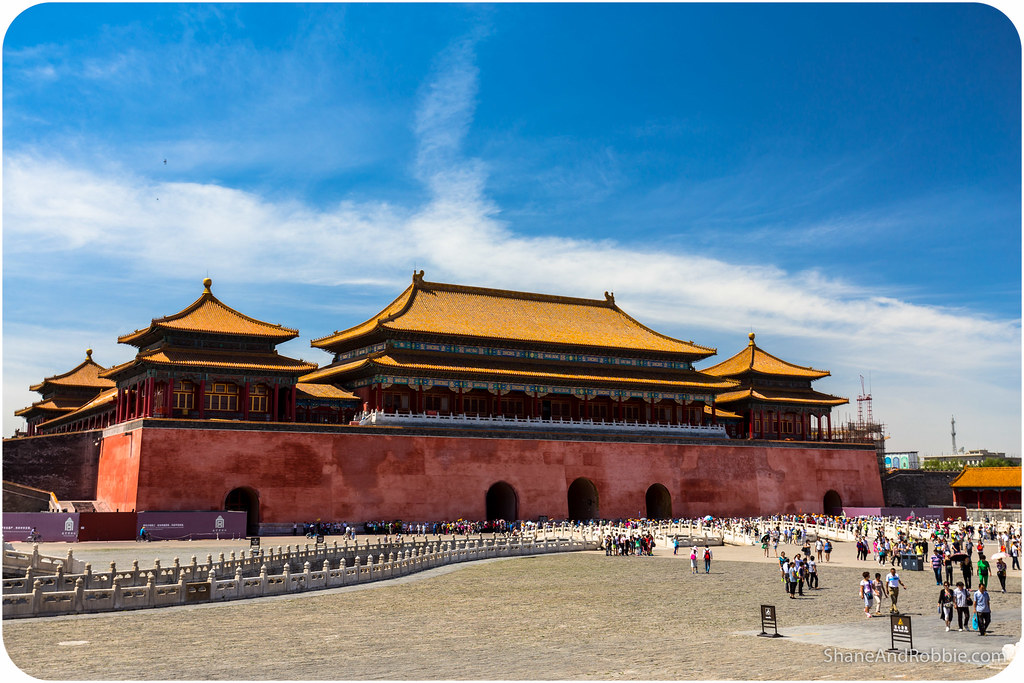 The Forbidden City is an extremely formal place: it is almost symmetrical and hierarchically arranged so that all the important buildings run down the centre, north-south. The various halls have poetic names, like the Hall of Supreme Harmony, the Hall of Central Harmony and the Hall of Preserving Harmony. These halls we passed through first as these comprise the outer palace where the Emperor met with ministers and supplicants and exercised his supreme power over the nation.

Moving further into the Forbidden City we passed into the inner palace where the imperial family lived. The emperor, his empress and 300+ concubines, and up to 5,000 eunuch servants all lived in the rear third of the palace compound. Most of these areas are in closed to the public today, though some have been partially restored and are used as museum rooms housing various displays. 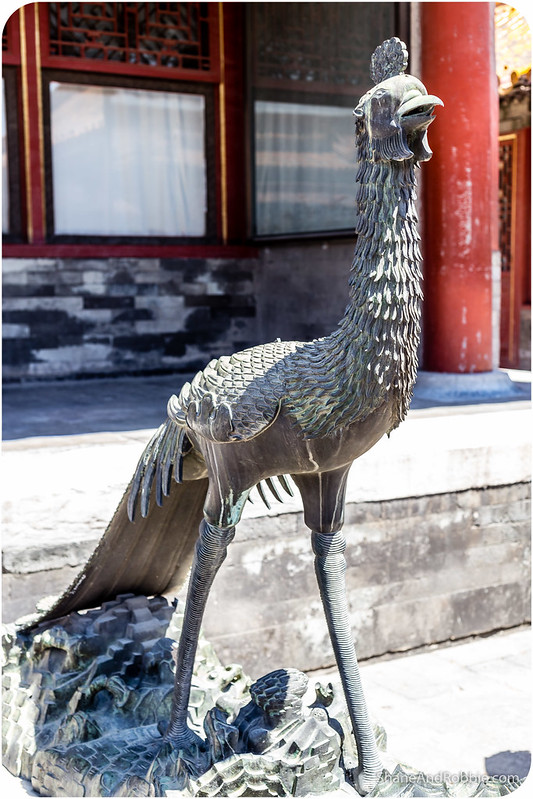 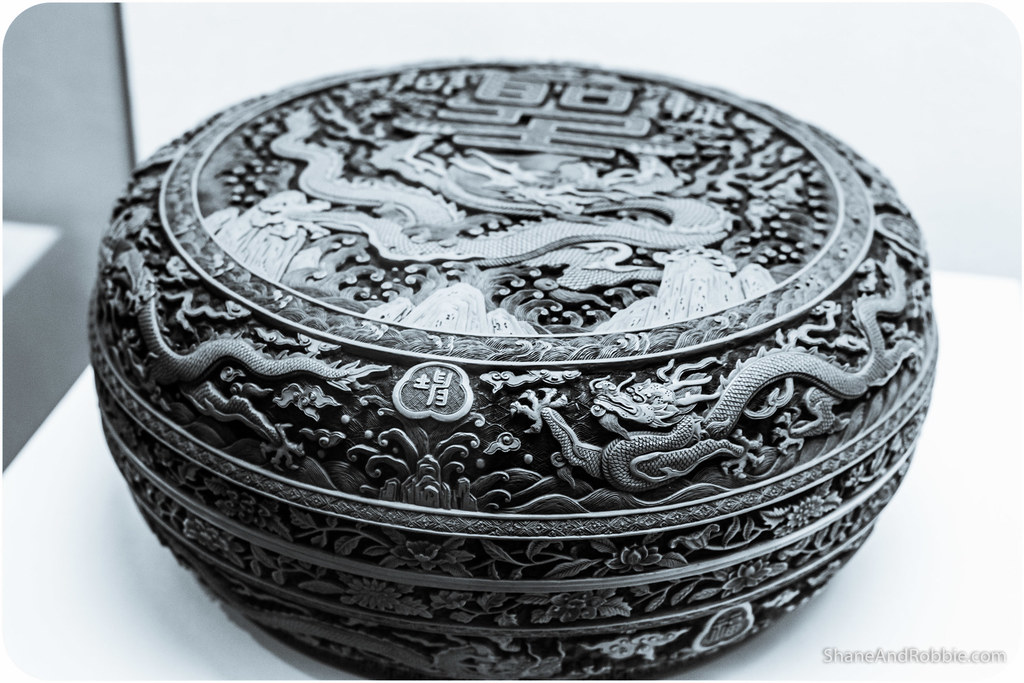 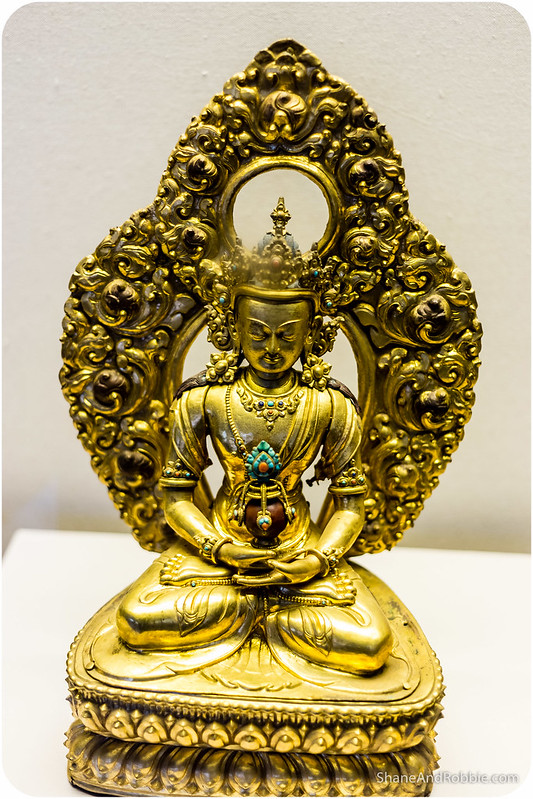 Construction of the palace complex began in 1407; it was completed 14 years later and is said to have taken a million workers to complete. Given the scale of the complex we believe it! 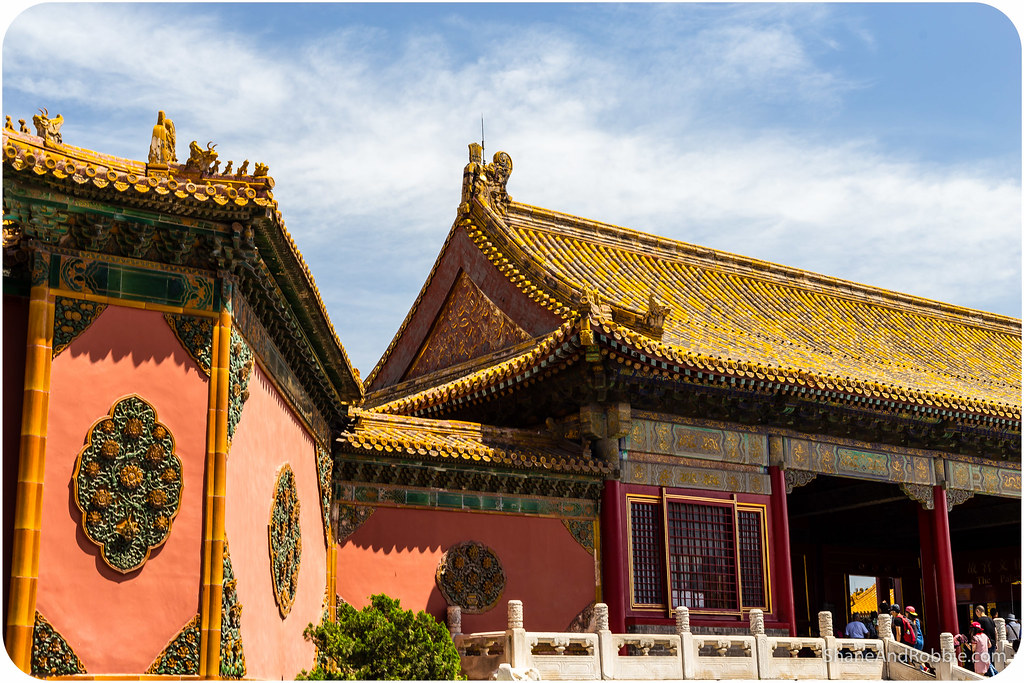 Significant engineering and artistic skill went into building the palace complex. The grand red city wall, for example, was built with bricks made of lime and glutinous rice mixed together, and held together by a “cement” made of egg whites and rice. These incredible materials make the wall extraordinarily strong. 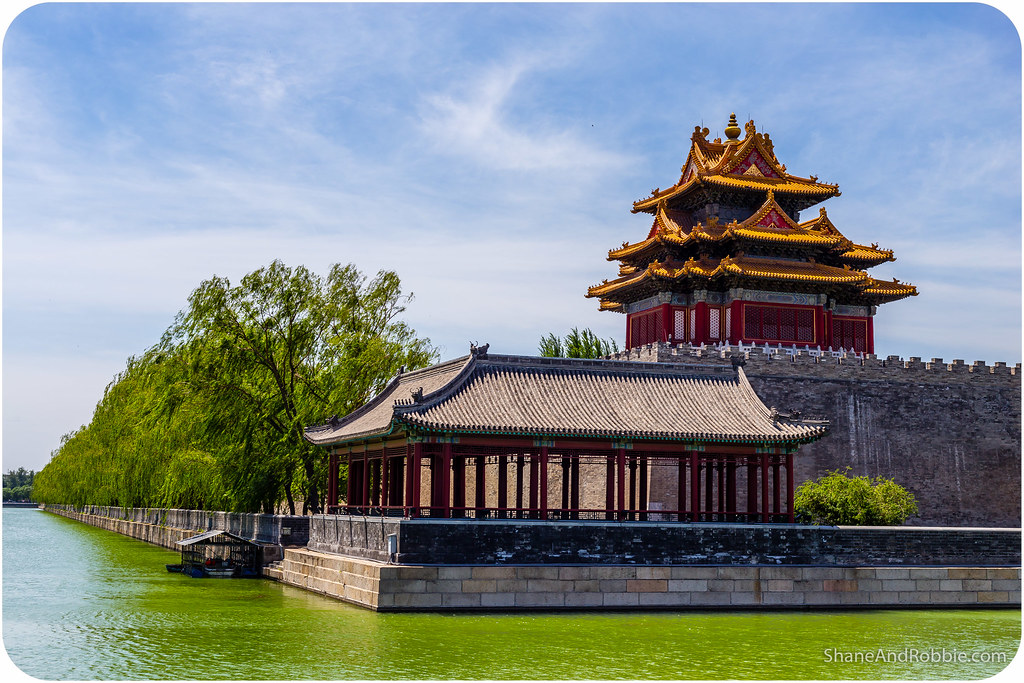 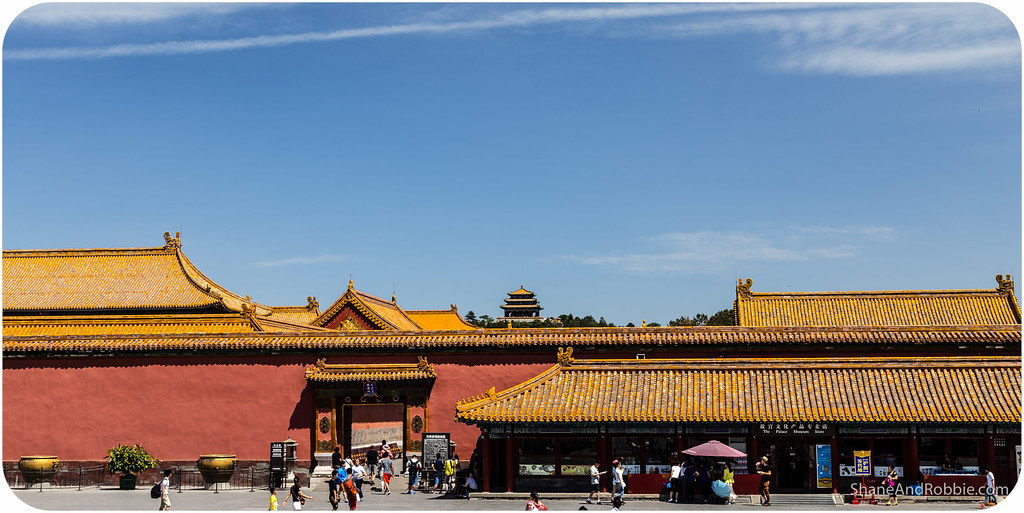 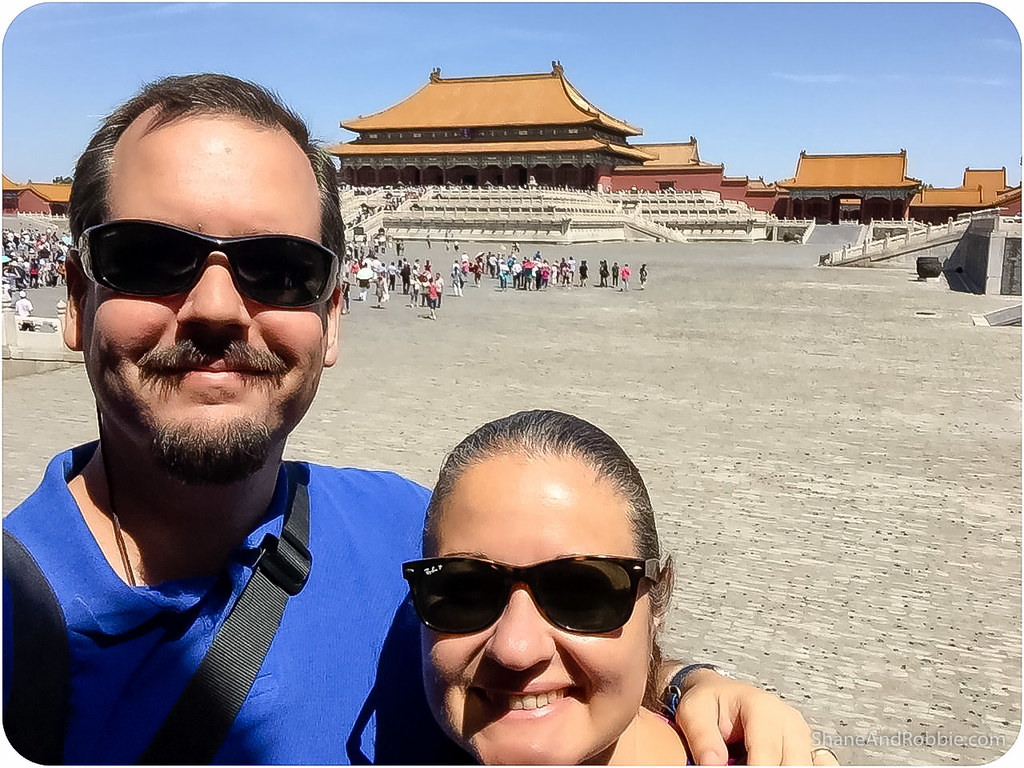 Since yellow was the symbol of the royal family, it is the dominant colour in the Forbidden City. Roofs were built with yellow glazed tiles; decorations in the palace were painted yellow; even the bricks on the ground were made yellow. 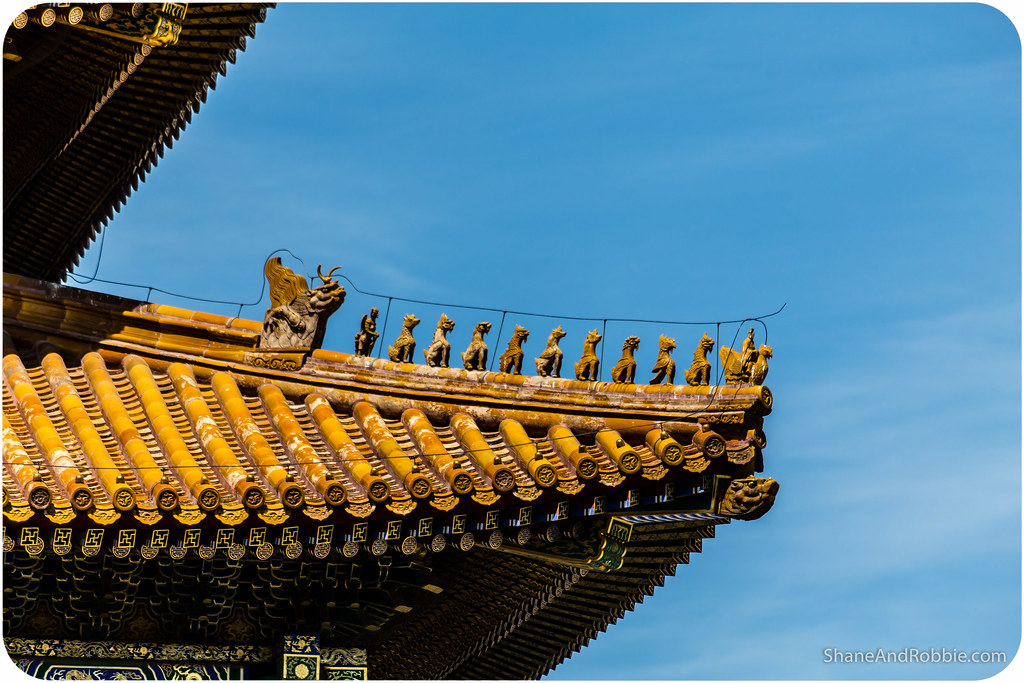 Also repeated everywhere is the dragon motif. Of all the animals of Chinese mythology and symbology, the dragon is the most regal and was exclusively used to decorate imperial buildings, clothing, and possessions. 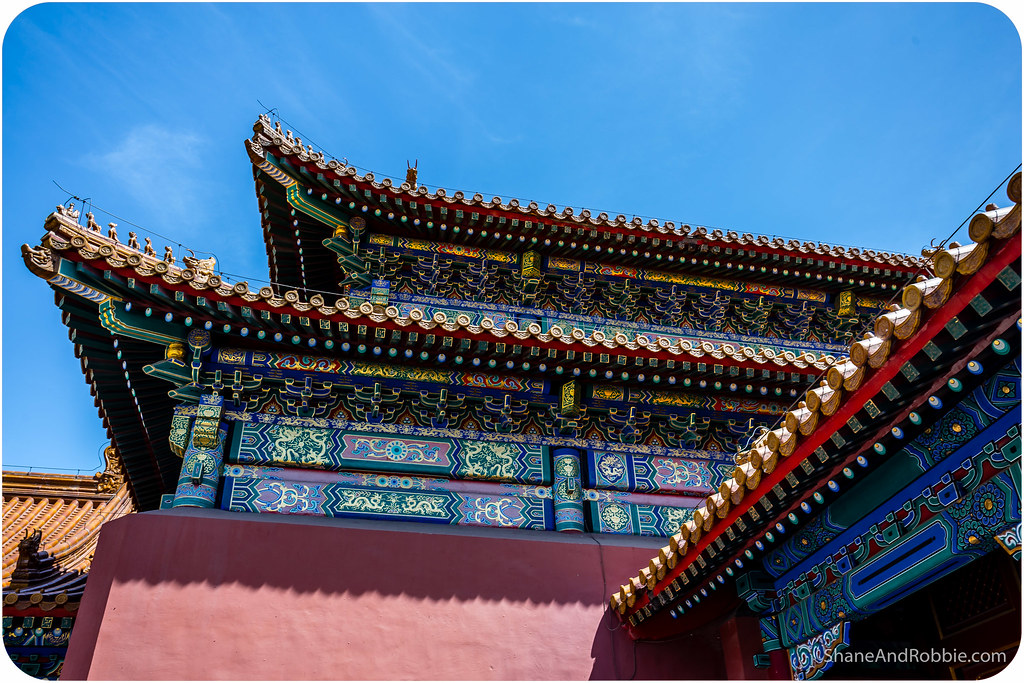 We spent quite a few hours strolling through the Forbidden City, exploring the various wings and museum displays. There’s just so much to see! Eventually though hunger drove us to seek an exit and we headed out for lunch in the old part of Beijing.

After lunch we headed a little further south to our last imperial site for the day: the Temple of Heaven. Never a temple for general public use, this was where the emperor would go every year to pray and beseech God in Heaven for a bountiful year and a plentiful harvest. Today the 267 hectare grounds have been converted into a vast public park, with just the central temple area walled off for tourist visits. This meant we had to walk through the park on our way to the Temple of Heaven. It was wonderfully cool under the shade of the ancient cedar trees, and in contrast the chaos and noise just outside, it was nice and quite in the park. We saw groups of retired Beijingers enjoying a relaxing afternoon of mahjong with friends, or just snoozing in the shade. 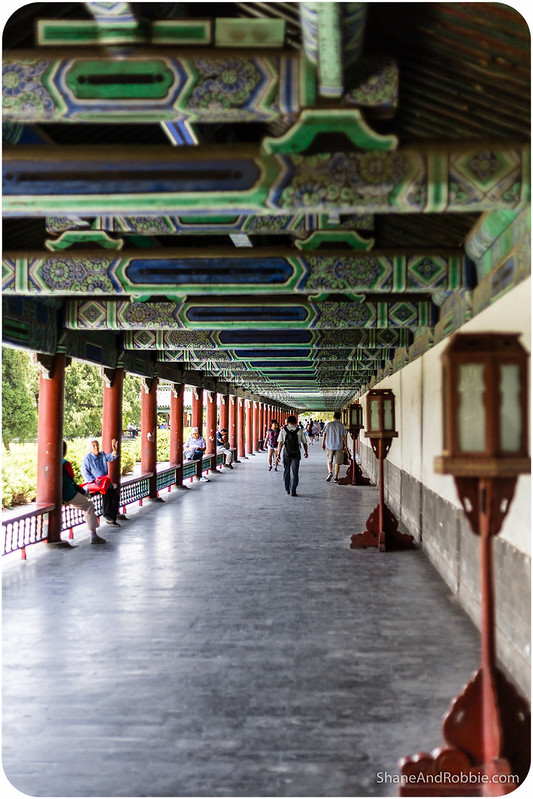 The main Temple of Heaven was stupendous; this 38m high wooden structure was built in 1420 and was where the emperor would say his prayers. The building itself was beautifully decorated and, peering inside (no one is allowed inside unfortunately), we could just see the 12 wooden pillars that hold up the ceiling without any nails or cement. 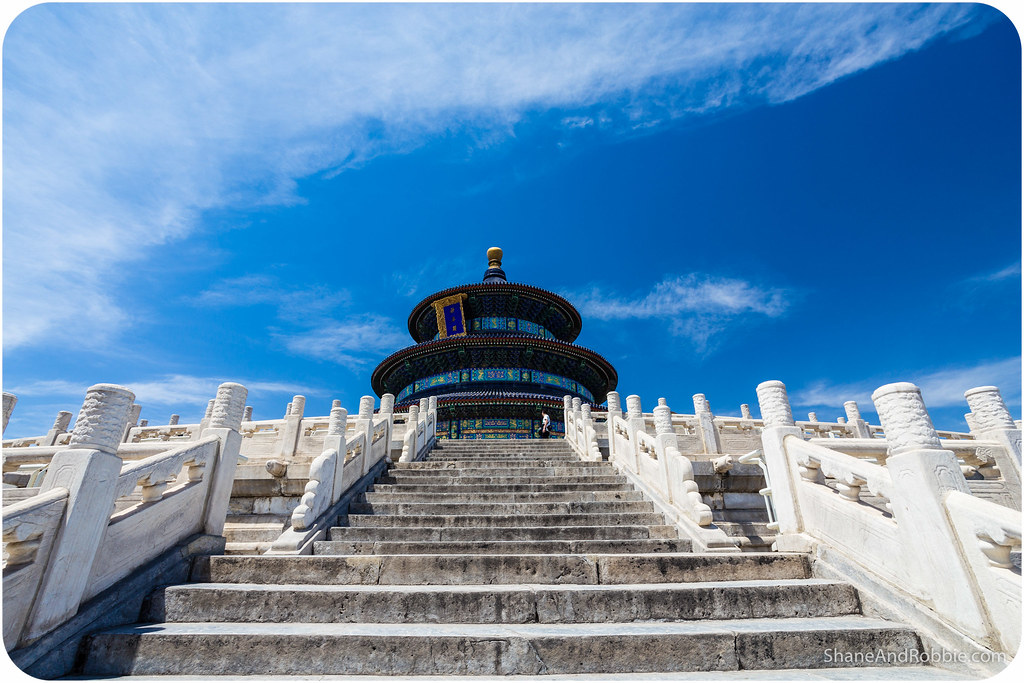 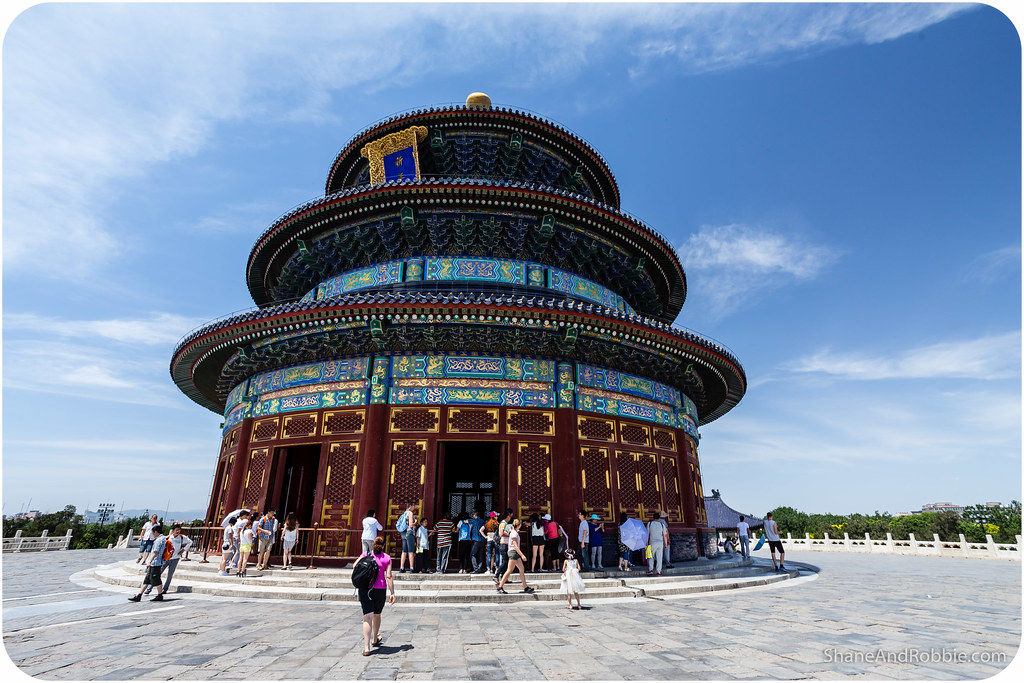 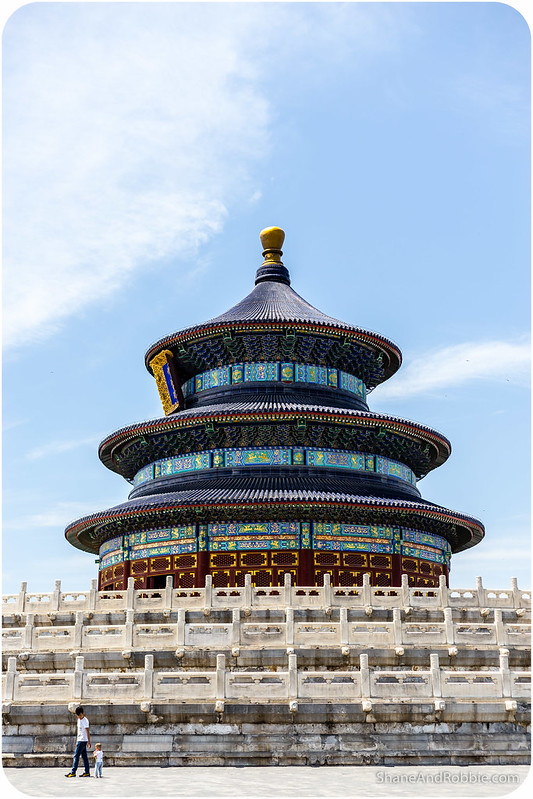 Exhausted and full to the brim with facts and figures about Chinese history, emperors, empresses, eunuchs, and concubines, we called it a day at this point. As always it took us a stupidly long time to get back to our hotel (the traffic in this city is RIDICULOUS!), but now we’re relaxing and enjoying a real cup of coffee in a small café we found near our hotel. Ahh…., so much pleasure from such small comforts! 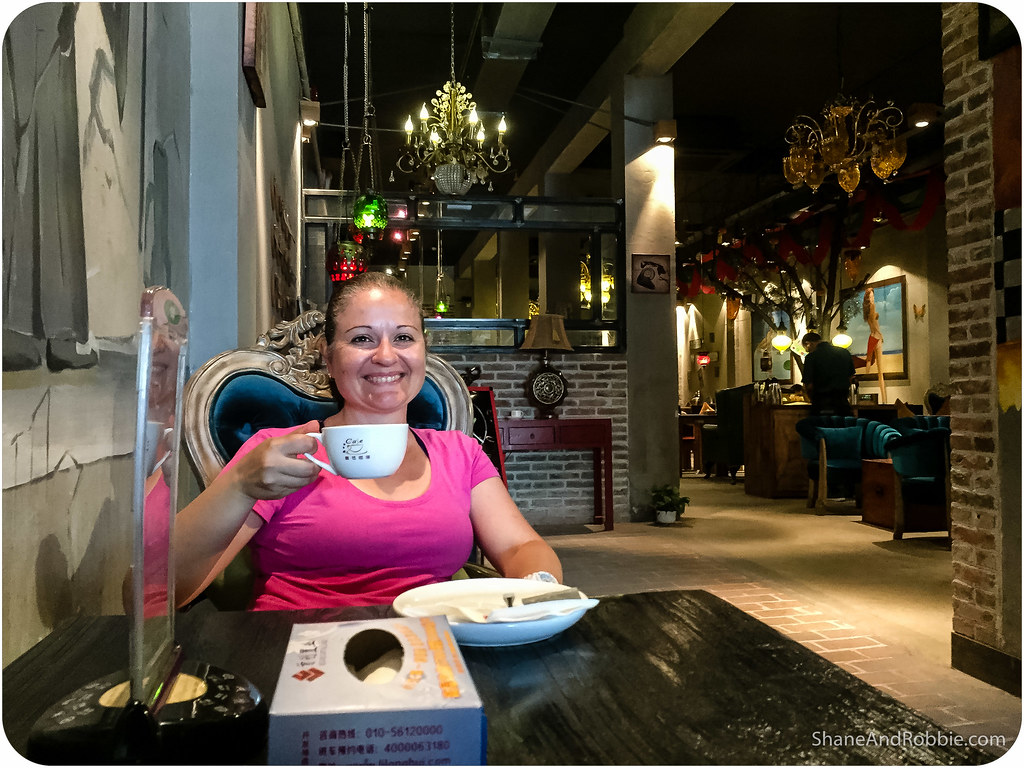 Tomorrow is our final day in Beijing, and our last day in China in fact. In some ways the last month has flown by so quickly that it incredible that it’s almost over; in other ways these have been a very challenging few weeks for us and we can’t wait to get the hell out of this place! 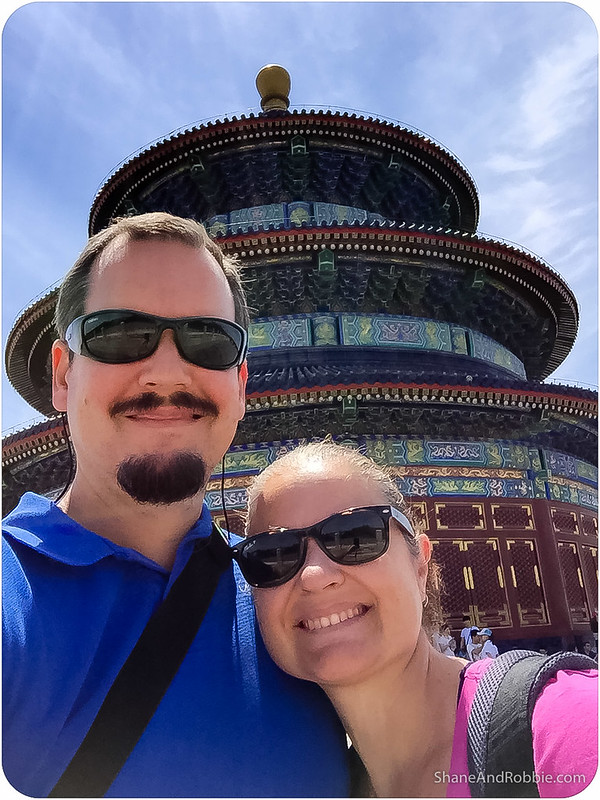