THE IMPRESSIVE RUINS OF CASHEL

Cashel is a small village (population 4,000) about 100kms north of Cork. The town itself is cute and unassuming, but the ruins that lie just outside of town are some of Ireland’s most epic monuments. The Rock of Cashel was the seat of power of the kings of Ireland for 400 years; it was then a significant religious site for 1,000 years; and is today a major tourist attraction. We spent most of our day in Cashel, enjoying the views, the history and the beauty of the area. 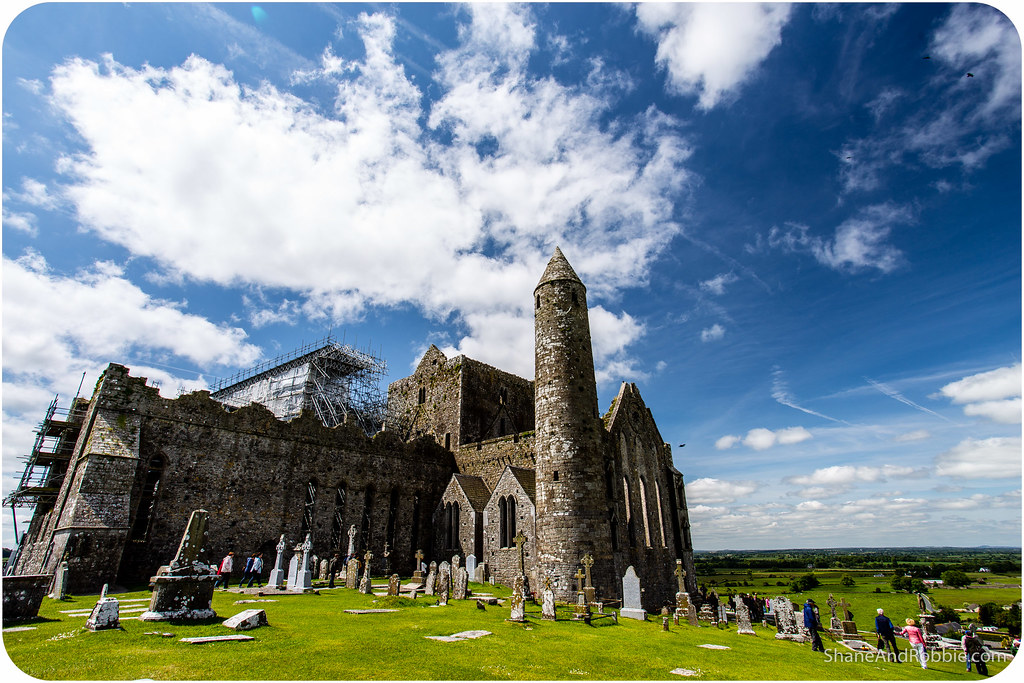 The Rock of Cashel, also known as Cashel of the Kings, was a castle built by the the ancient Eoghanachta* Chiefs on Munster. They rules from there until the Norman invasion of Ireland. Sitting atop a small hill, the castle looked over the rich and fertile plains around it and made for an imposing sight for miles around. Not much remains of the original castle today, but the grey stones of the ruins are still imposing and impressive.
* The Eoghanachta were an Irish dynasty which ruled in southern Ireland from the 6th to the 10th centuries. 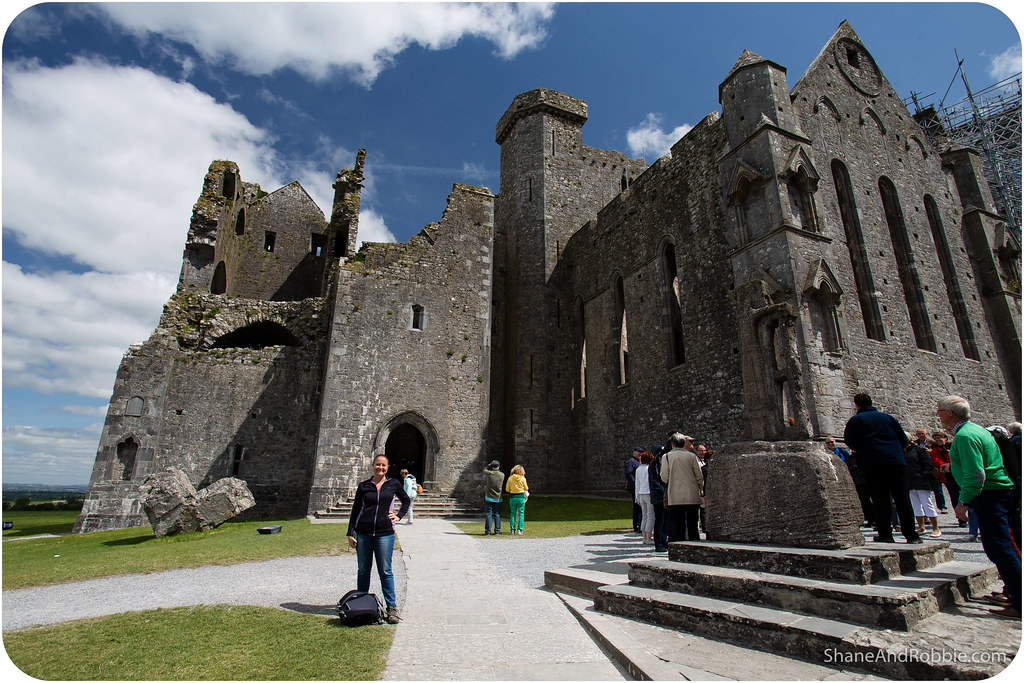 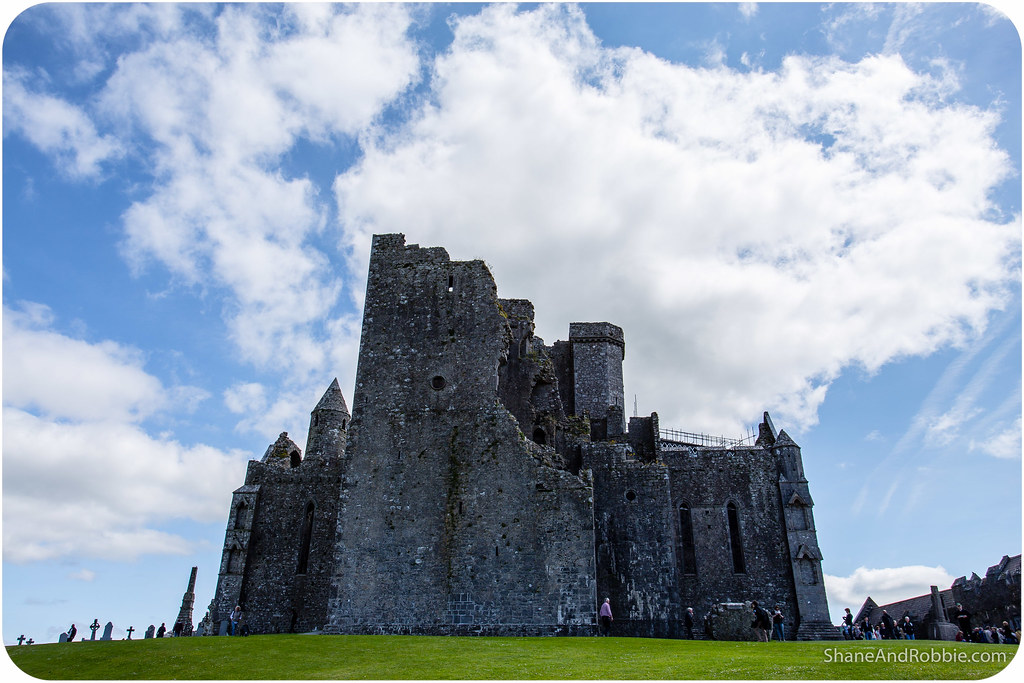 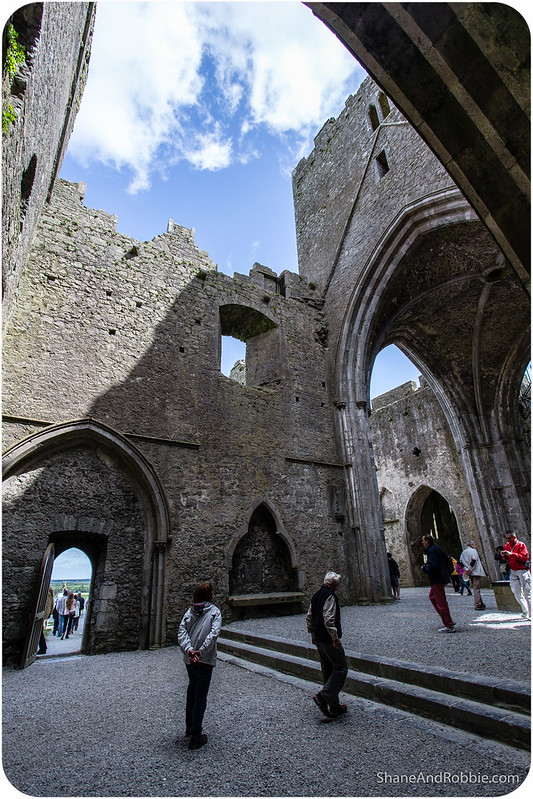 In 1101 the King of Munster donated his fortress to the church and a cathedral was built on the site. Most of what’s left at Cashel now are remains of the 12th century church. With its vaulted ceilings and thick stone walls, the fortified cathedral must have been quite remarkable in its day. It was in use as a church until 1749 and then gradually fell to ruin. Despite this, it’s still a grand structure today that had us captivated. 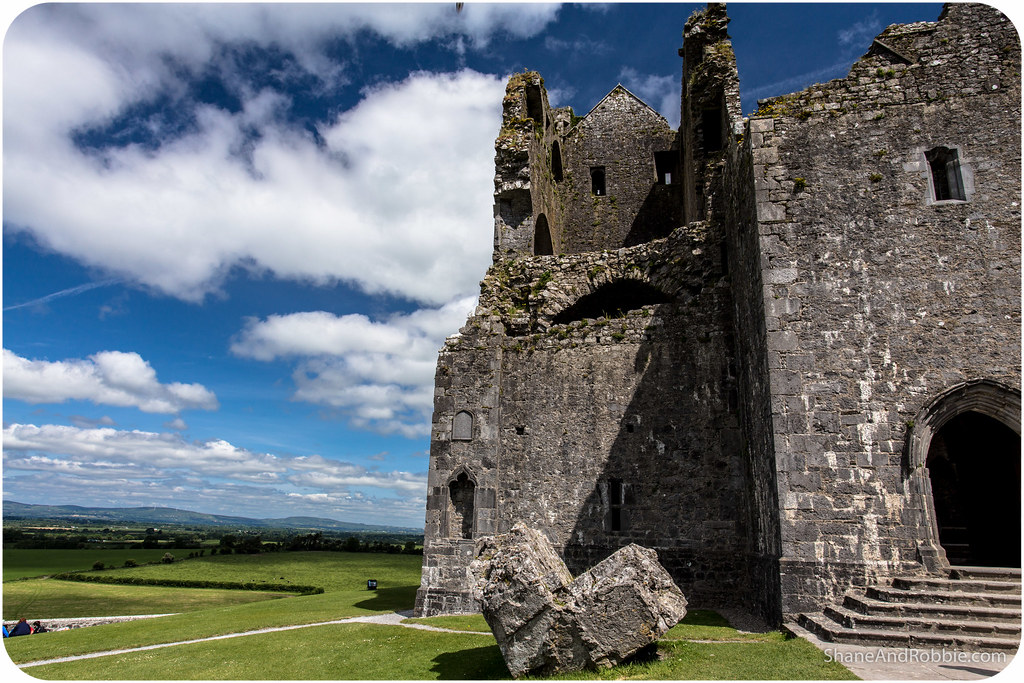 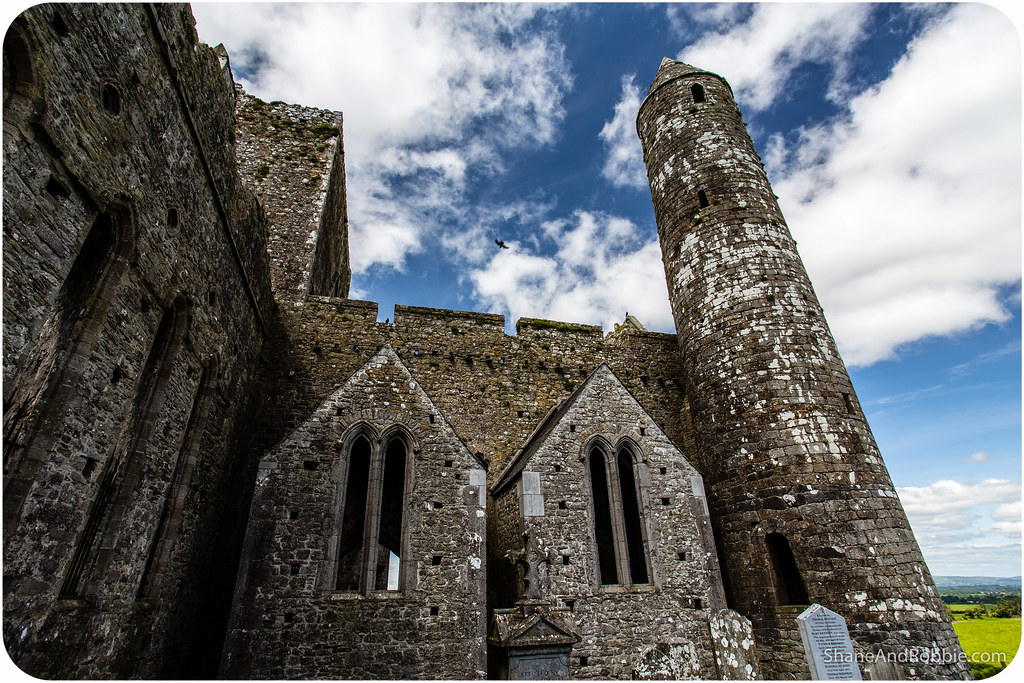 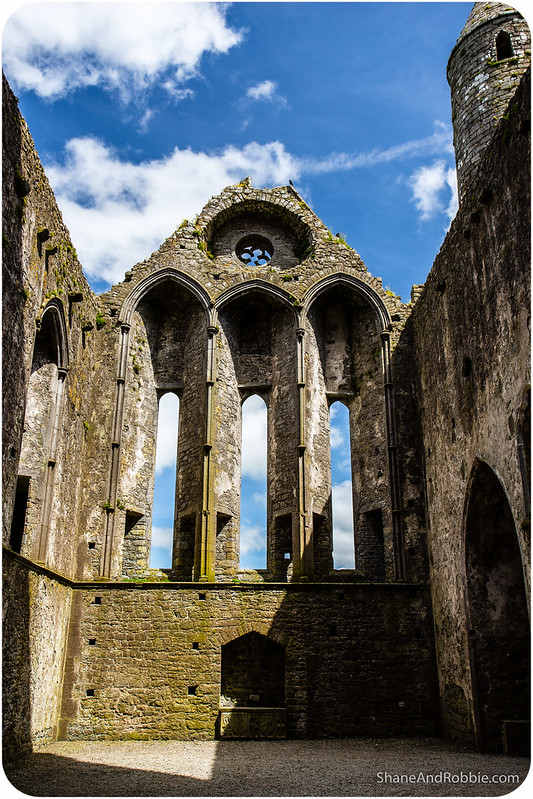 The entire plateau on which the buildings lie is walled and within the walls lies an extensive graveyard dating back centuries. To this day, 7 local families still have rights to be buried at the Rock of Cashel. 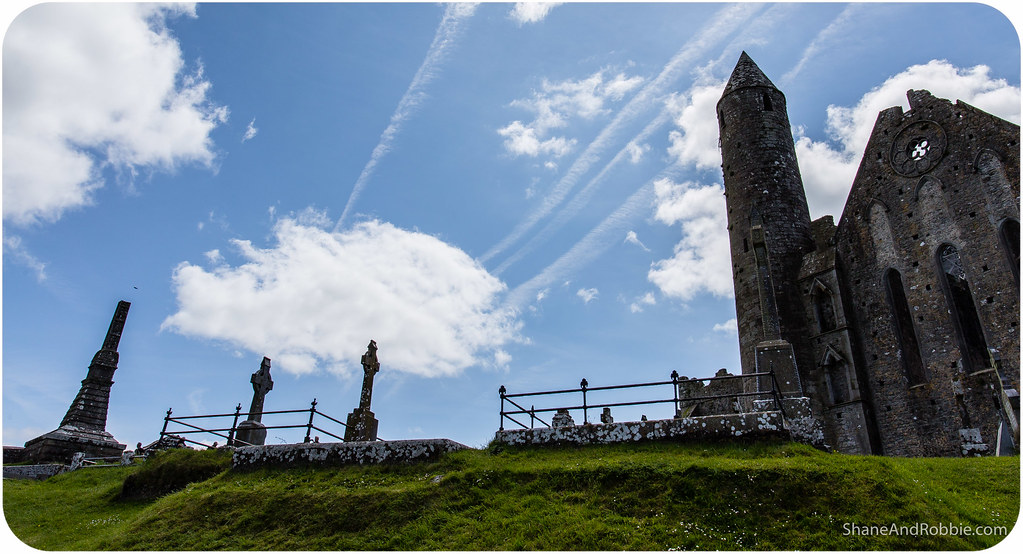 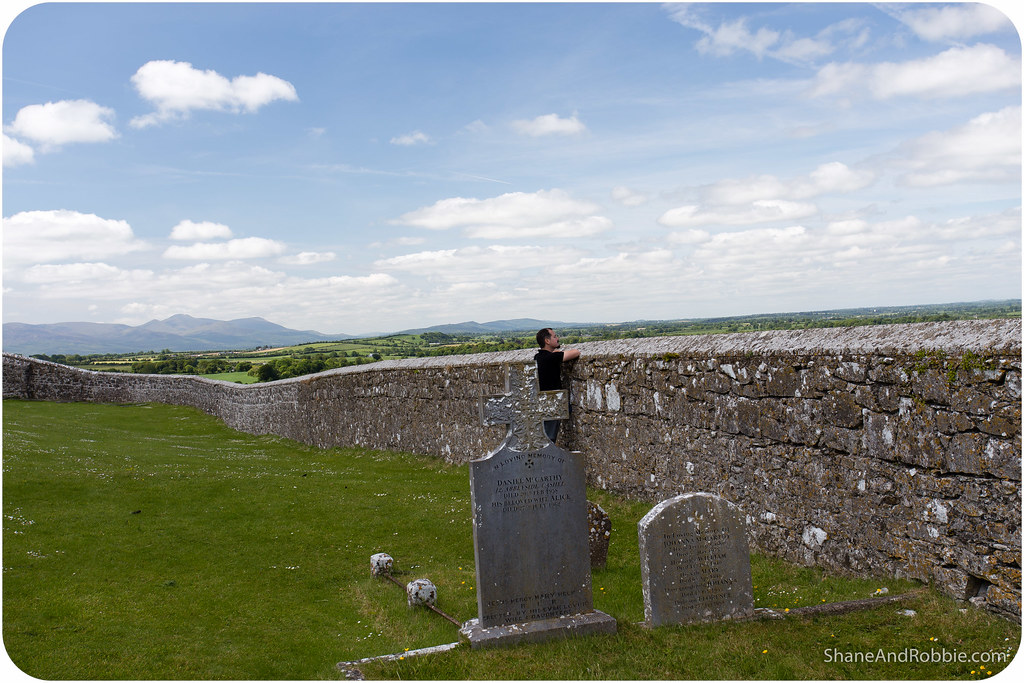 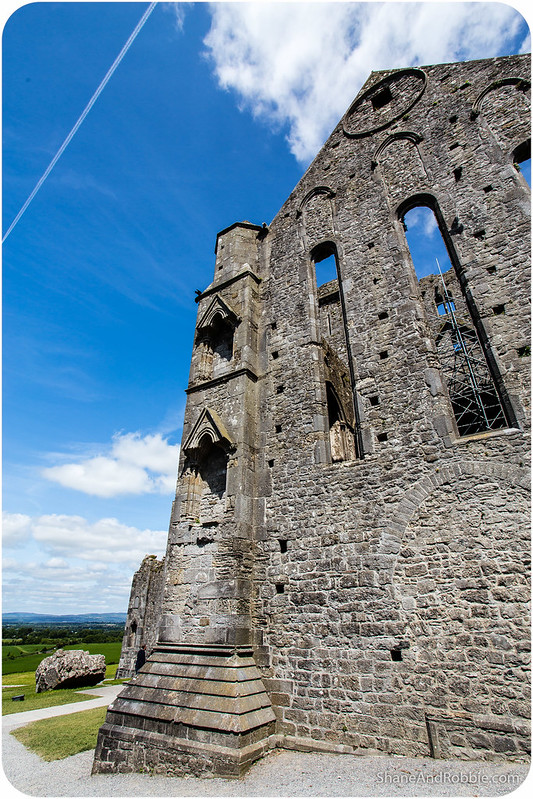 The view of the surrounding landscape from the top of the Rock of Cashel was breath taking. It was whilst we were taking in the views that we noticed another set of ruins a few kilometres away. 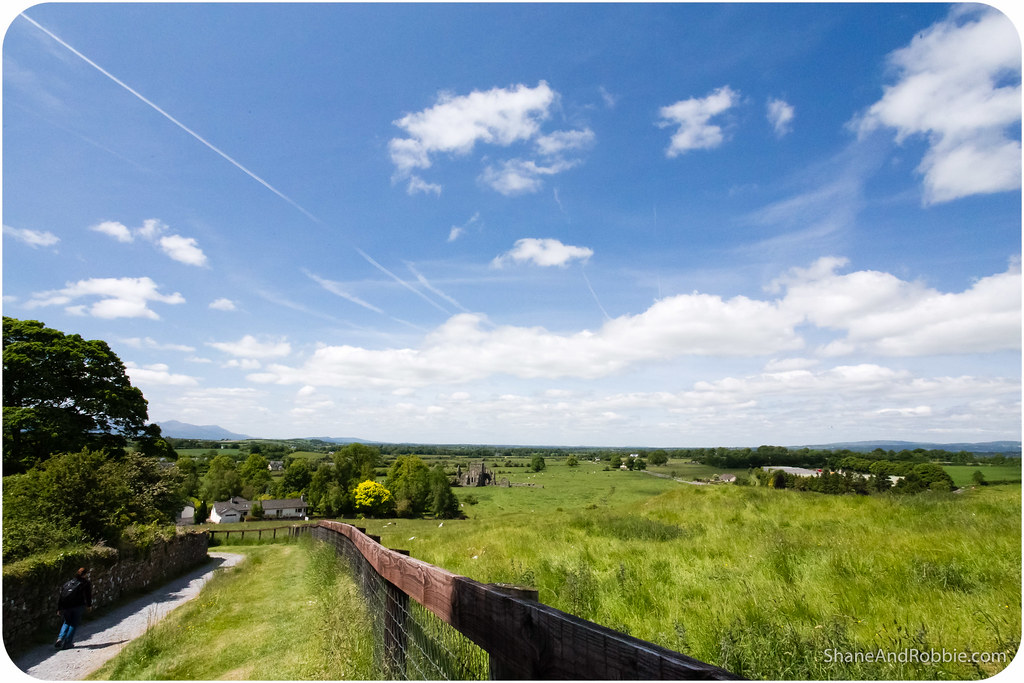 Those ruins, it turned out, were the remains of Hore Abbey. This former Benedictine abbey was founded in 1266 abut fell into disrepair when it was abandoned in the 18th century. 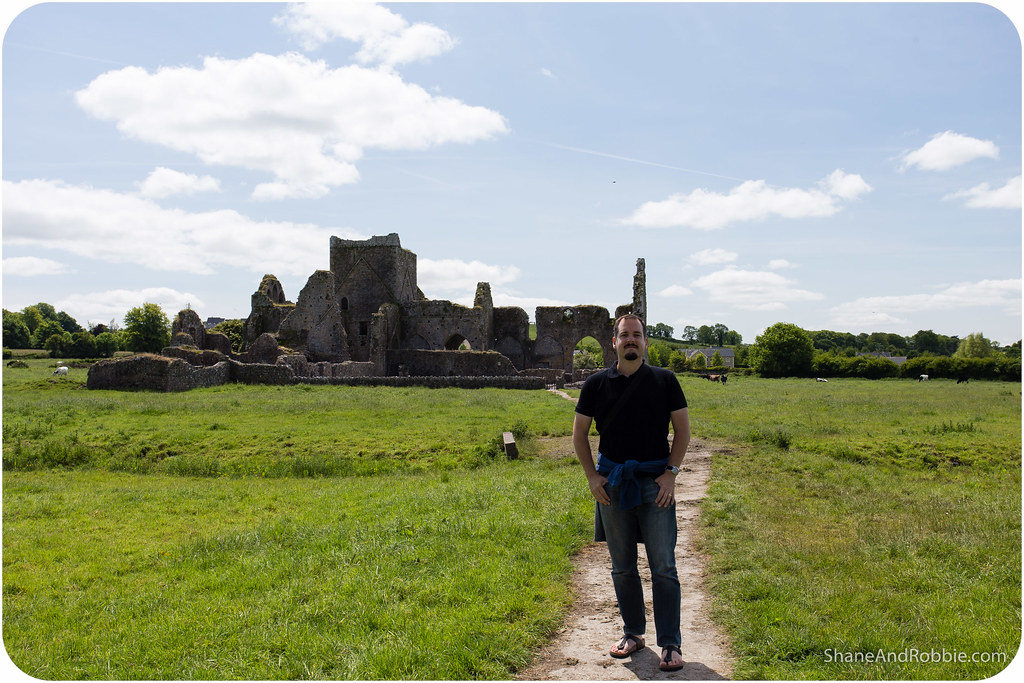 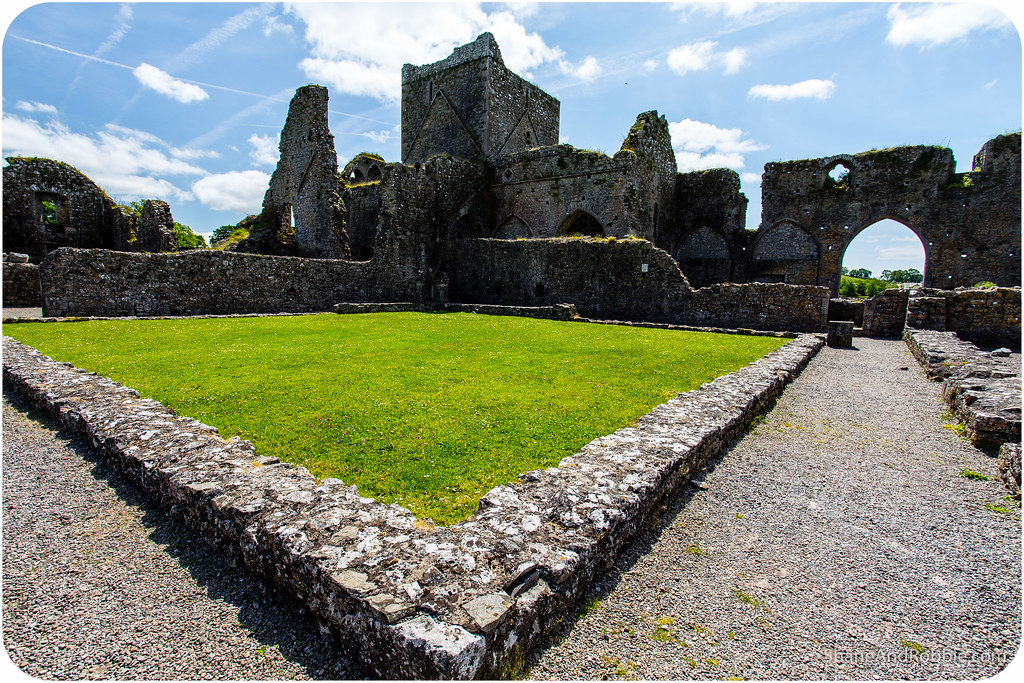 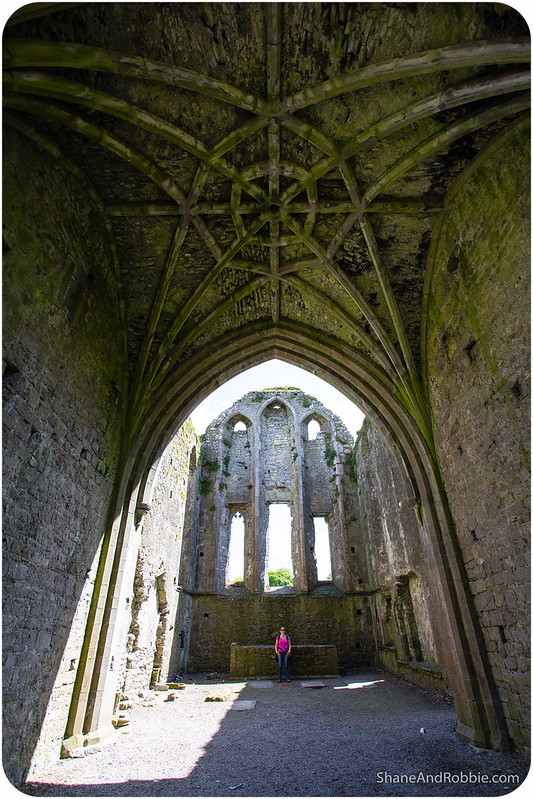 What’s left of the abbey sits in a field, surrounded by grazing cows and used as a roost by blackbirds. Seems a rather ignominious end for such a majestic building! 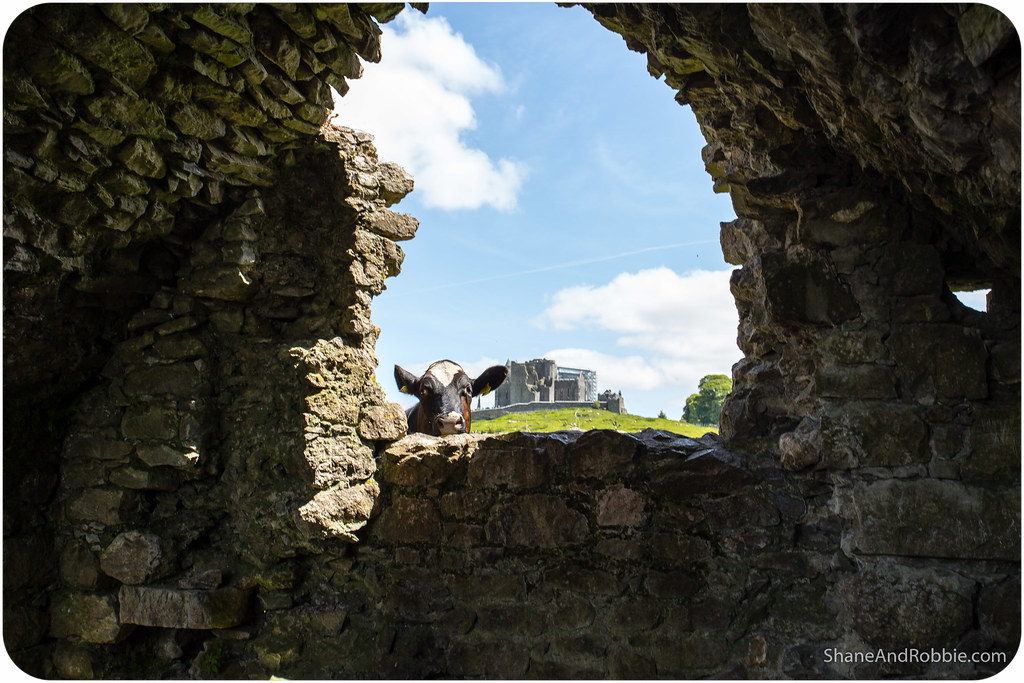 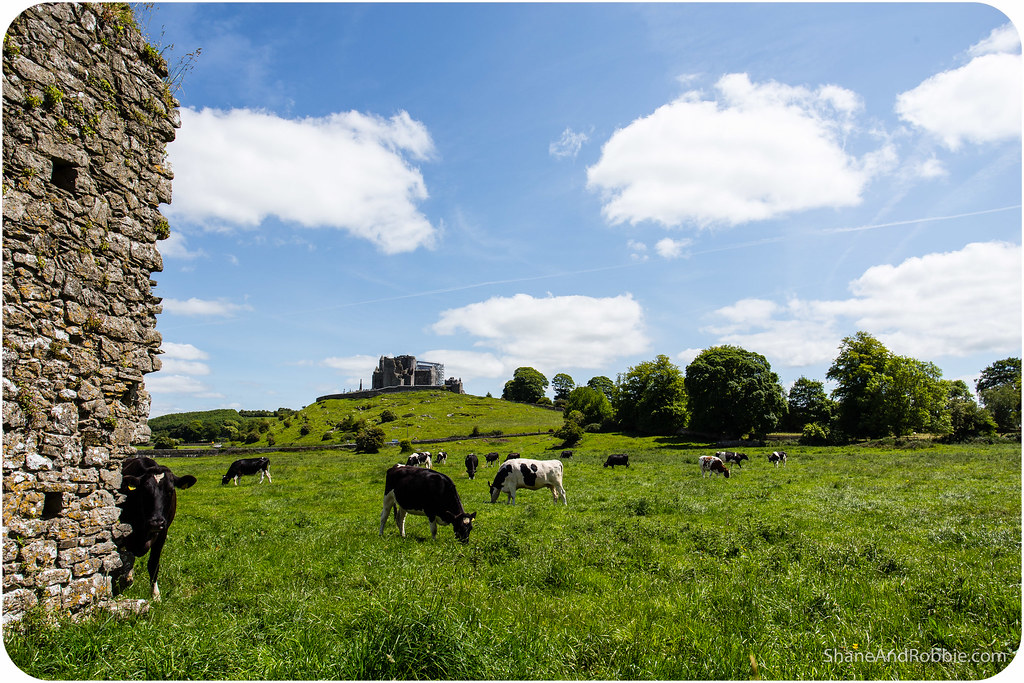 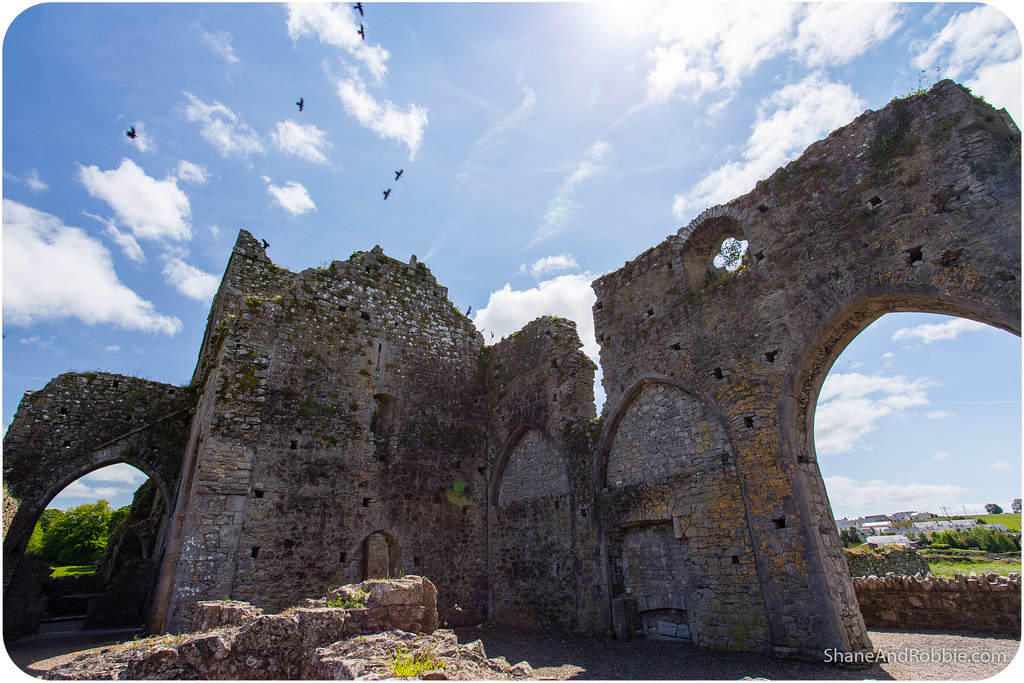 After doing a quick tour of the village of Cashel we found a fantastic pub in town for a late lunch. Seems small town Irish pubs excel in simple, rustic fare! 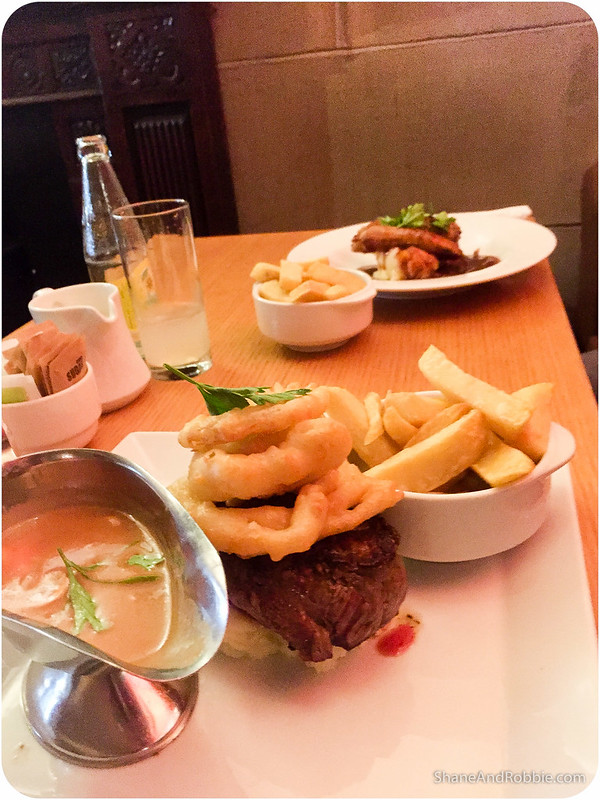 We had a great day exploring the area around Cashel and are really happy to have made the journey out there. The site has a history steeped in power and we left impressed and awed by the Rock of Cashel. Can’t wait to see more of Ireland! 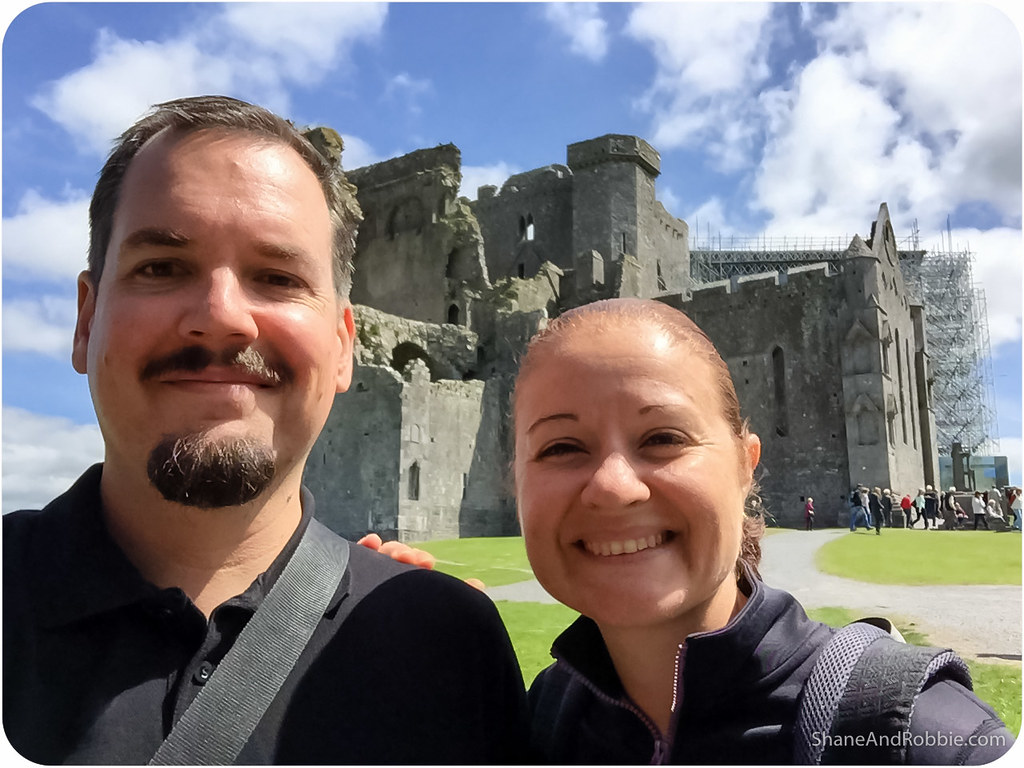