THROUGH THE GAP OF DUNLOE WE GO

To the west the Killarney skyline is dominated by MacGillycuddy’s Reeks. This mountain range includes Ireland’s highest peak (Mt Carrauntoohil – 1,038 m), and the only peaks on the island that are over 1,000 metres. Cutting through the Reeks is the Gap of Dunloe, a glacier-carved mountain pass that we walked through today. Despite the “perfect” Irish summer weather, the views were amazing and we had a fantastic day trekking through the Gap of Dunloe. 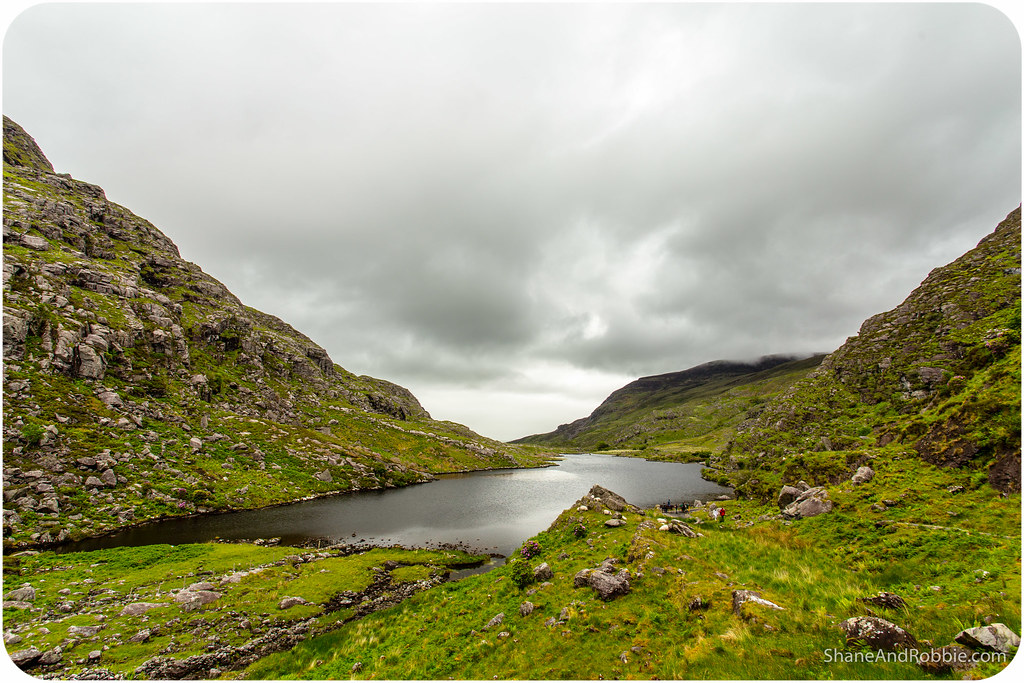 The Gap of Dunloe is narrow enough that it’s impassable for coaches, this means no big tour buses can go through and leaves the mountain pass relatively free of tourists. There’s a local company here that organises transport for people like us, however, who are keen to enjoy the scenery in and around the Gap. Basically they pick you up in a little old bus and drive you round to Kate Kearney’s Cottage (the starting point for the Gap of Dunloe walk). Once you’ve finished your walk (or horse-drawn carriage trip*) through the Gap, they then pick you up at Lord Brandon’s Cottage and take you across Lough Leane, back to Killarney, by boat.
*There’s a well-established tourist trade in horse-drawn carriage rides around Killarney that caters for people who don’t want to walk too much. In many ways it’s lovely seeing horse-drawn traps around the place, but they really do ruin the olfactory serenity with their giant piles of poop! 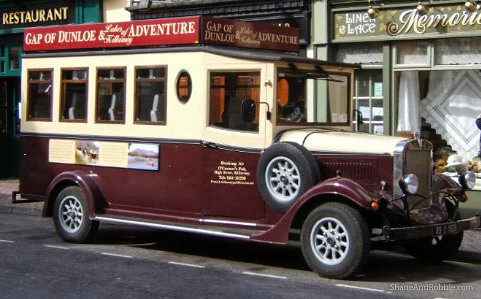 We set out from Kate Kearney’s Cottage around 10:30am (which, somehow, counts as “an early start” around here – we’ve already concluded that, for the most part, Irish people are NOT morning people!). The skies were steely grey and threatened rain, but it was warm enough (i.e. 19C) and we had umbrellas and raincoats with us, so off we went… 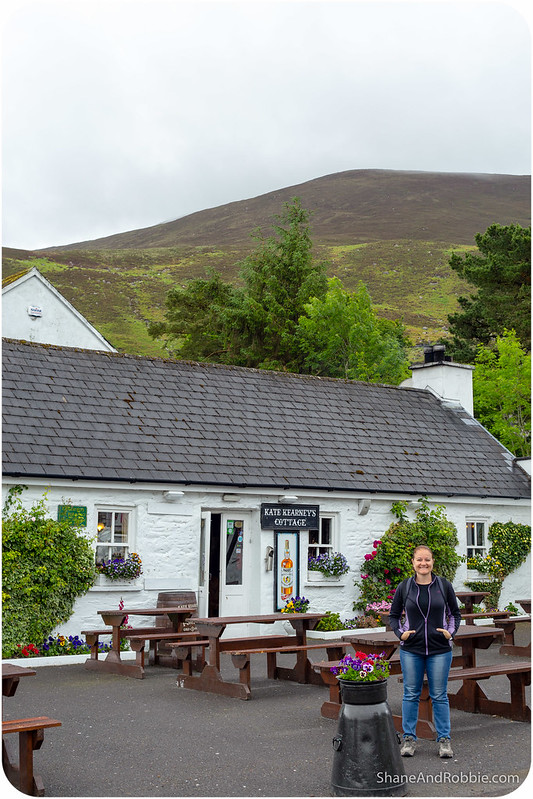 The path through the Gap of Dunloe is about 11km in all and took us about 2.5 hours to complete. Along the way we passed a few isolated homesteads and a whole lot of white woolly sheep, happily ignoring us as they munched on the impossibly green grass. 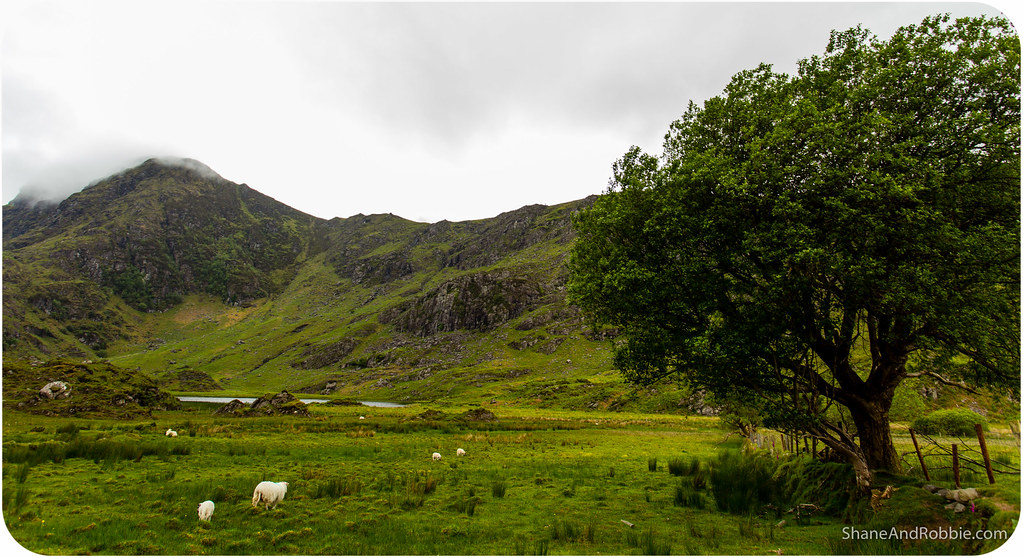 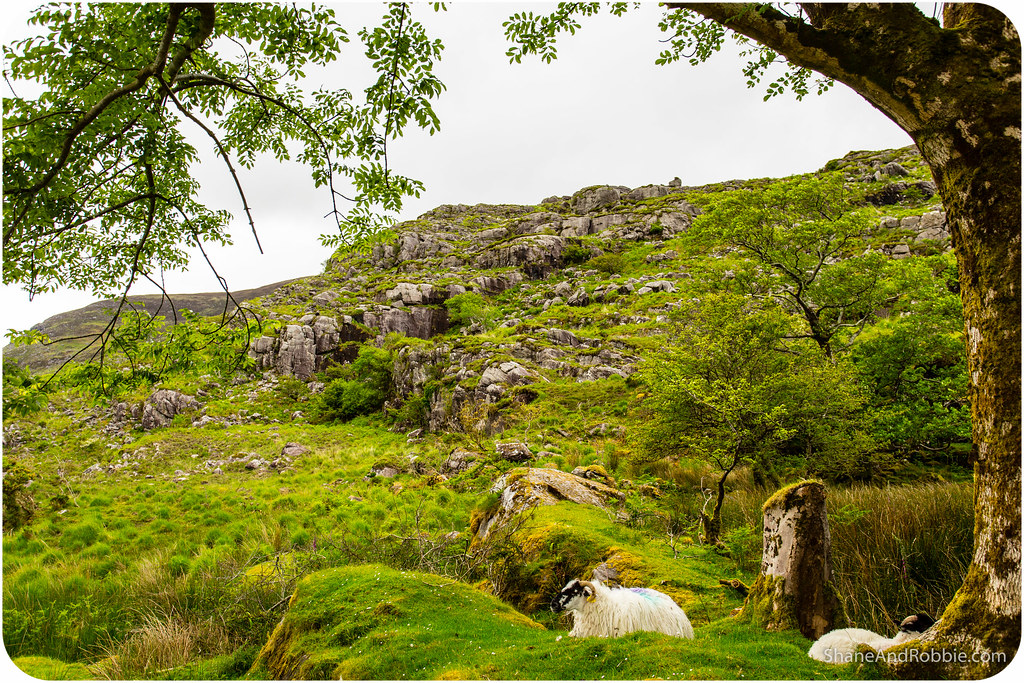 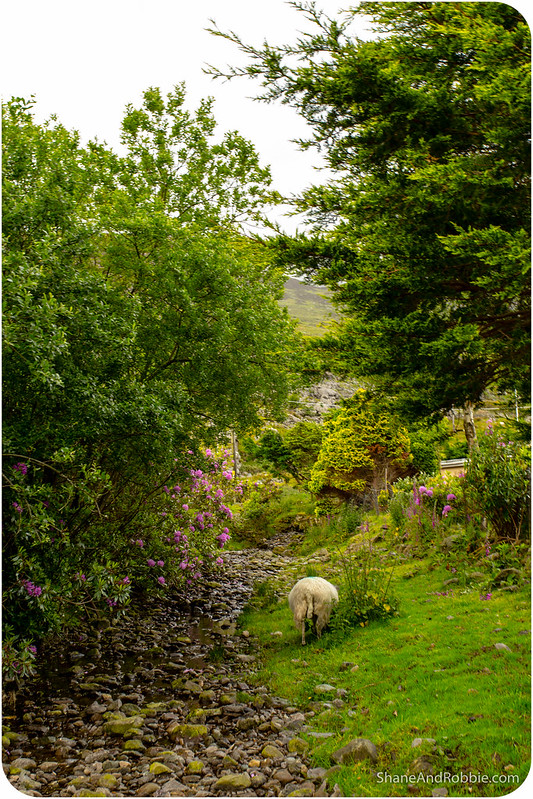 The first half of the walk was uphill and quite narrow and winding, though incredibly scenic. We crossed a couple of shallow, crystal clear streams and passed a small lake during the first half hour. Next to the lake there was a small tent, pitched to avoid the worst of the prevailing wind but make the most of the views. How awesome to wake up in a place like that! Except for the bit where you’ve got to dig a hole to poop in – that bit’s not so romantic or appealing. 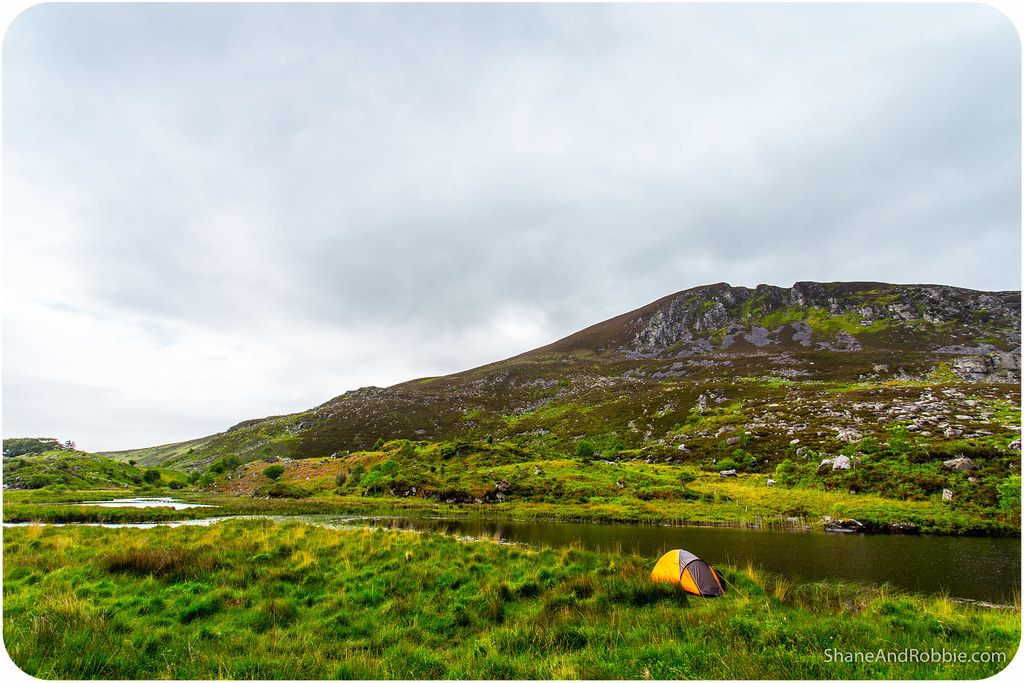 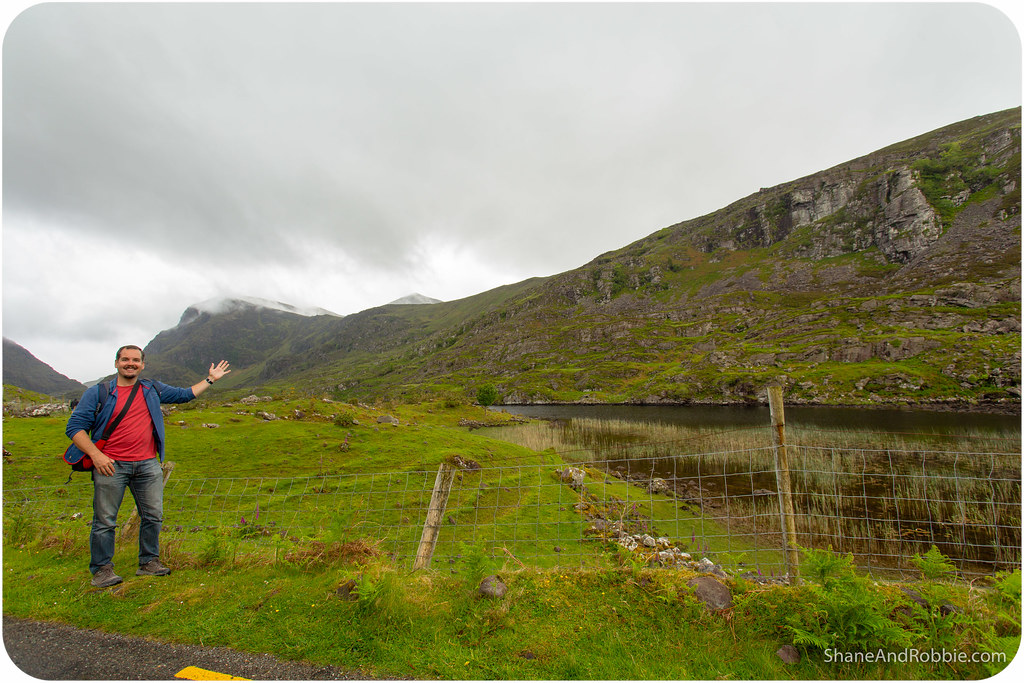 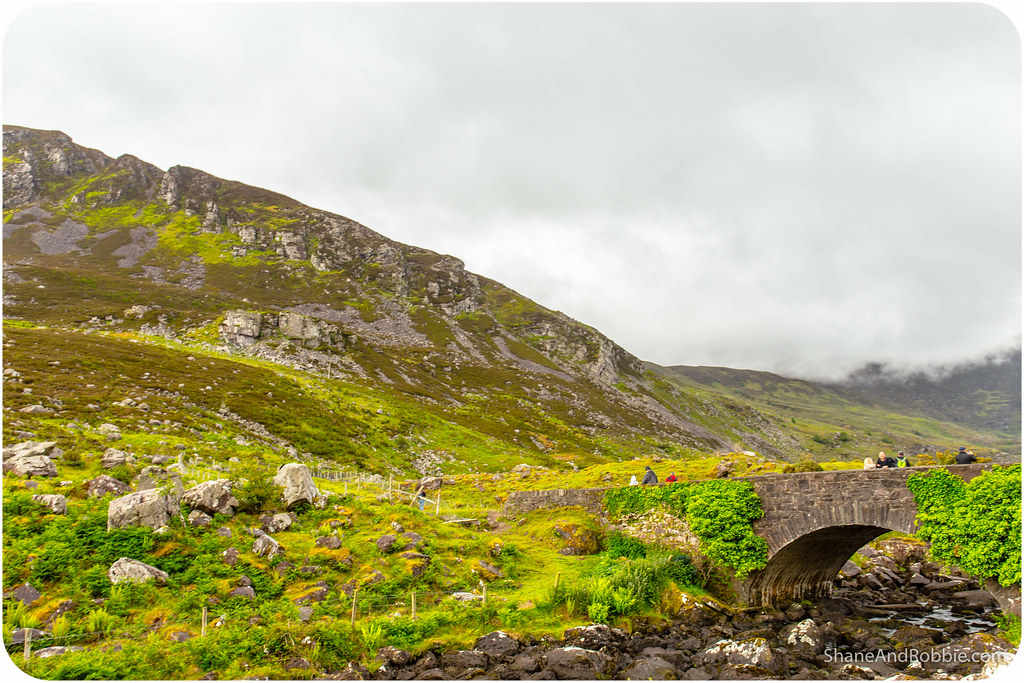 We were passed a few times by horse-drawn carriages, carrying their occupants up to the pass in relative comfort. At one stage an empty carriage pulled over and offered to take us the rest of the way for a reduced fee. By that stage we’d been walking uphill constantly for an hour so we were tempted, but the views were just too good to rush! So we pleasantly declined his offer and kept going. 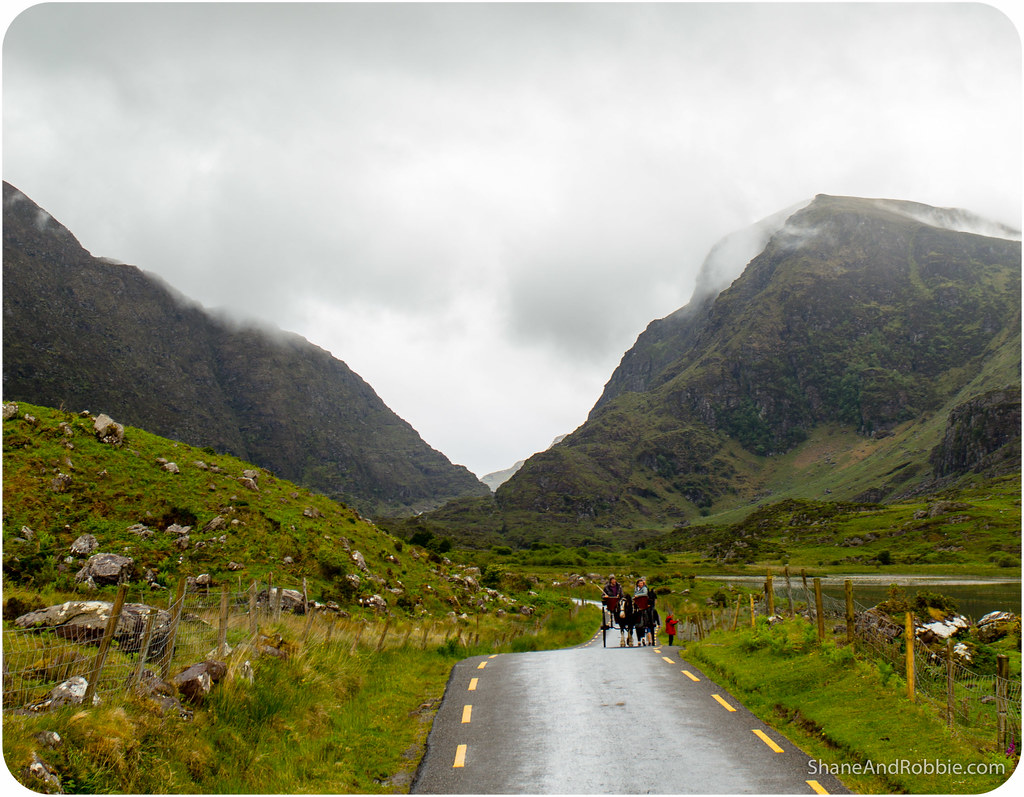 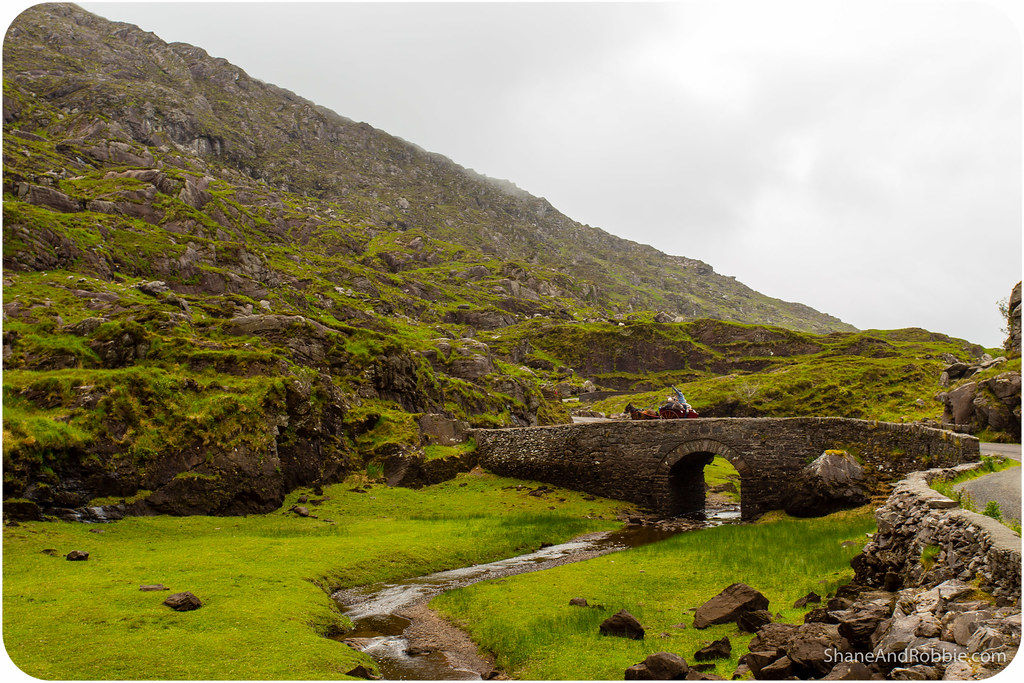 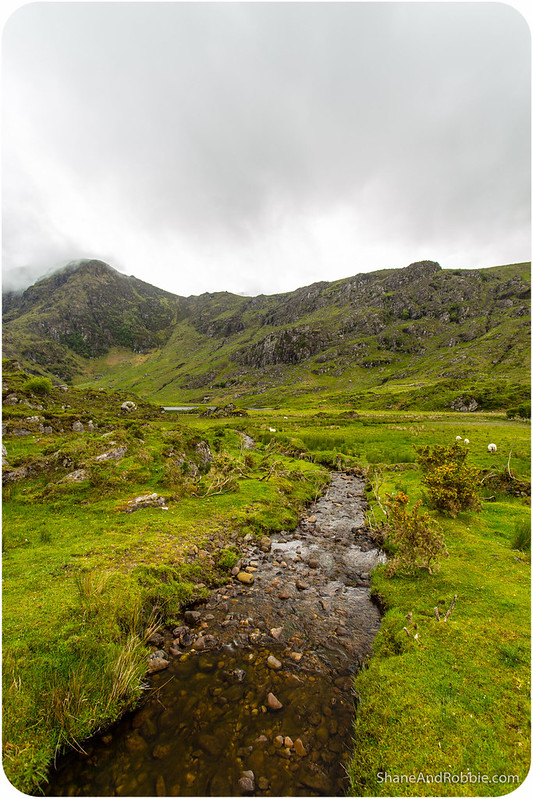 We passed through the pass after about 1.5 hours and took a minute to sit and enjoy the magnificent views of the valley either side of the Gap of Dunloe. We even had a brief moment of blue skies and sunshine while we were there! 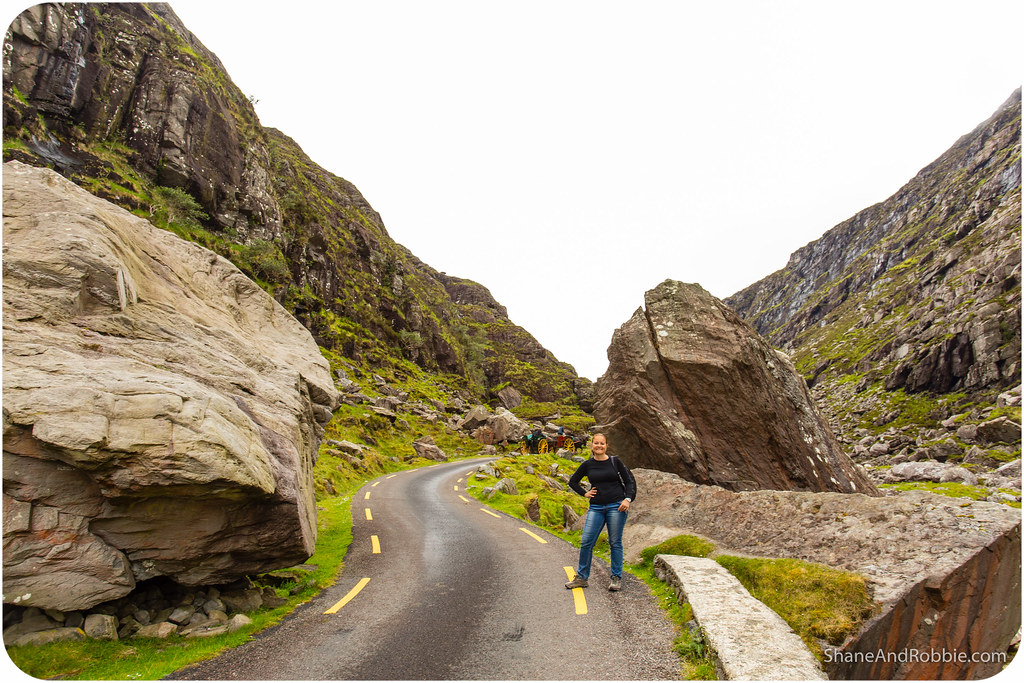 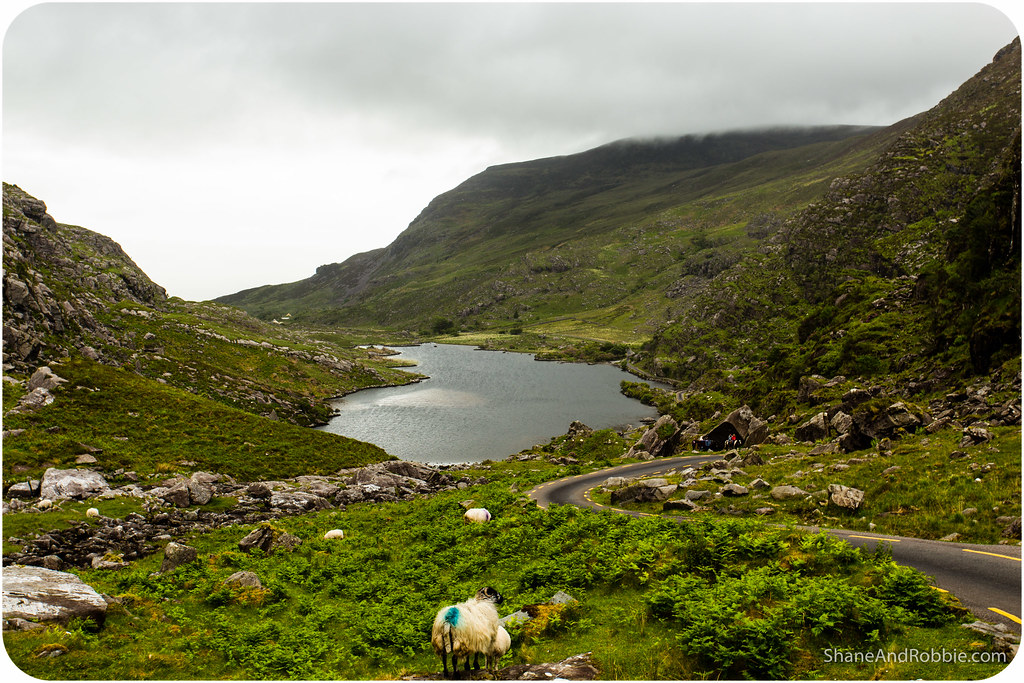 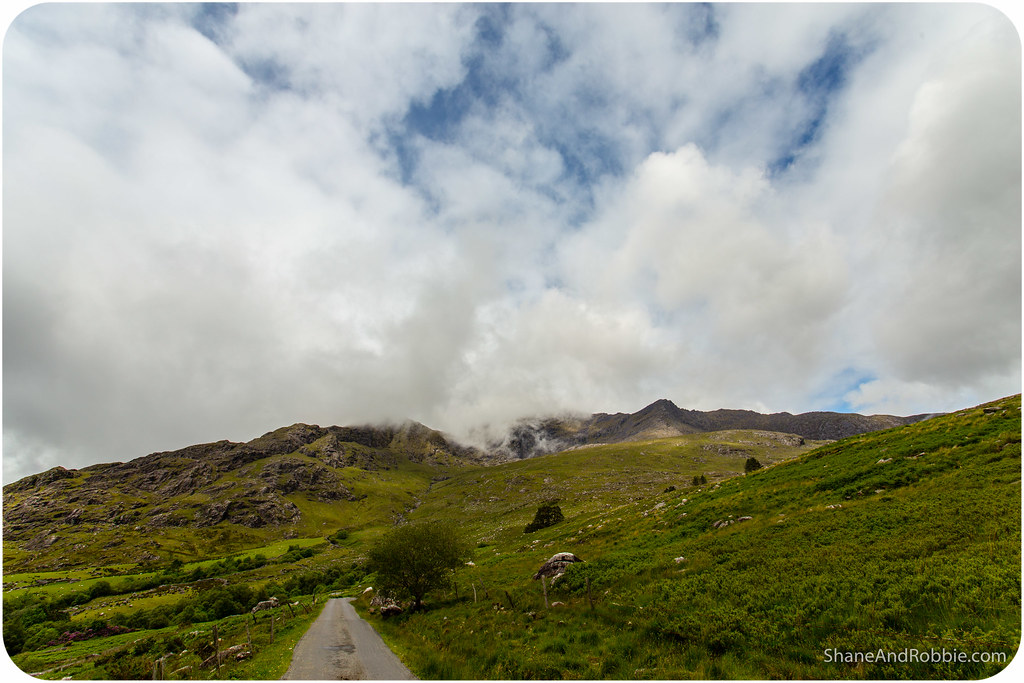 From there the hike got a lot easier as the narrow road wound its way downhill, towards Lord Brandon’s Cottage (so named after the gentleman who had the cottage built for himself as a place for some summer R&R), and the lakeshore. 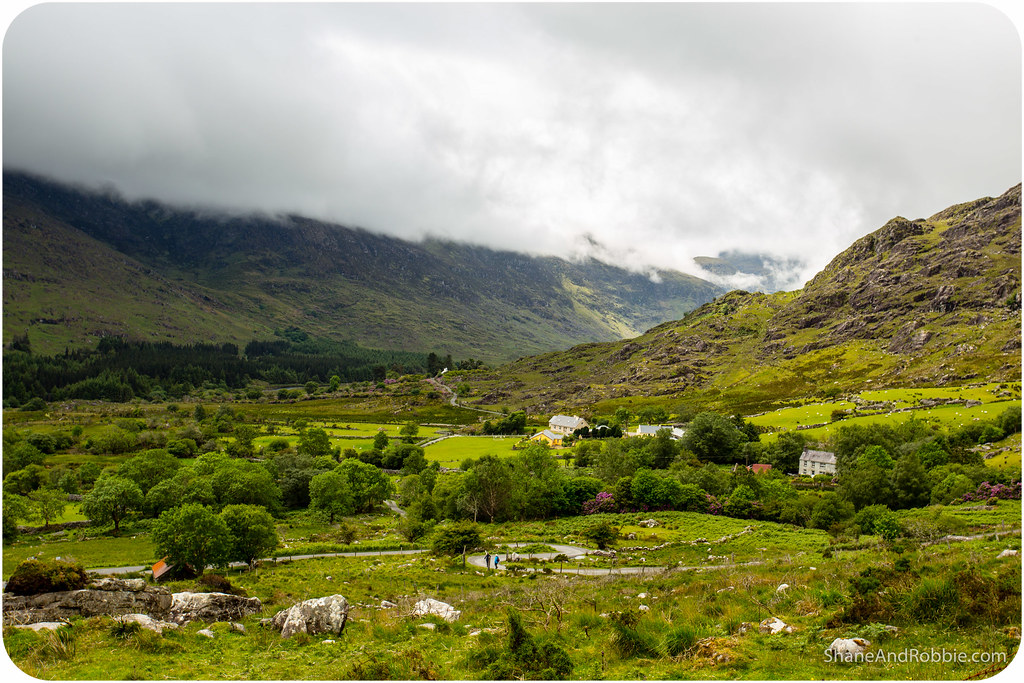 During the last hour of the walk we passed a number of derelict stone cottages. These farmhouses were abandoned during the 19th century when their inhabitants emigrated out of Ireland during/after The Potato Famine. There’s something fascinating about these neglected, collapsing architectural skeletons; each of them is a testament to a life story that took a dramatic turn down a completely different path at some stage in history. 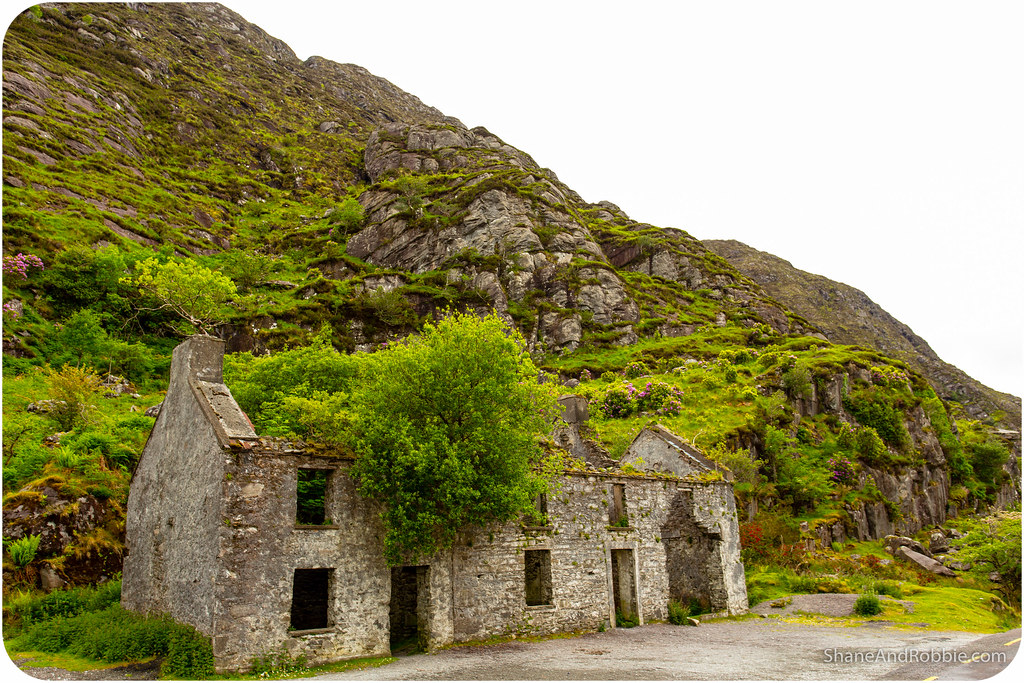 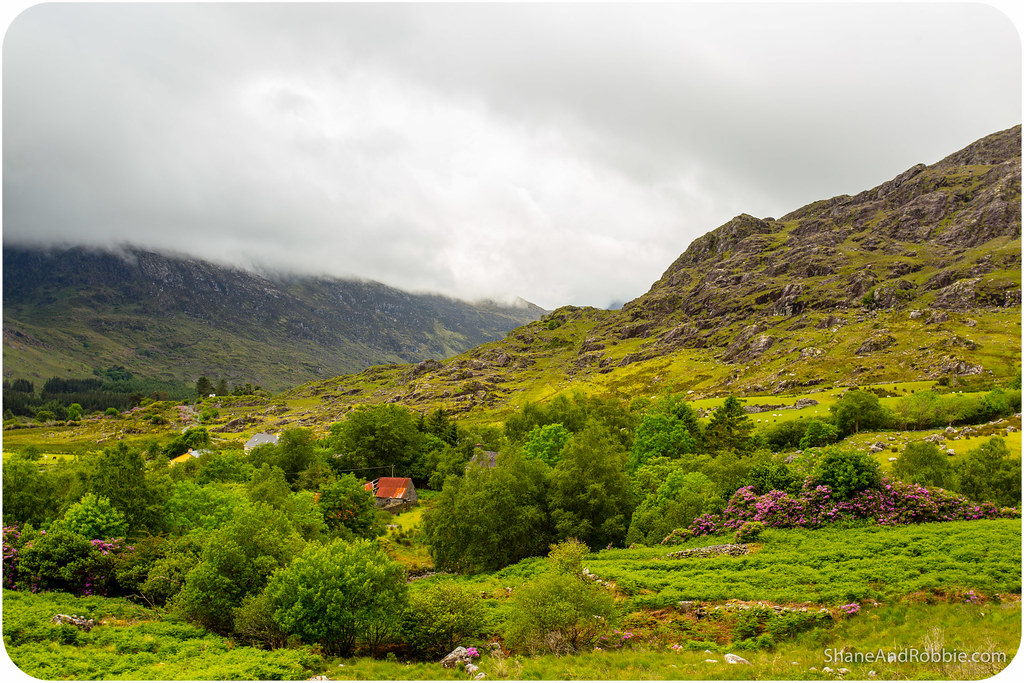 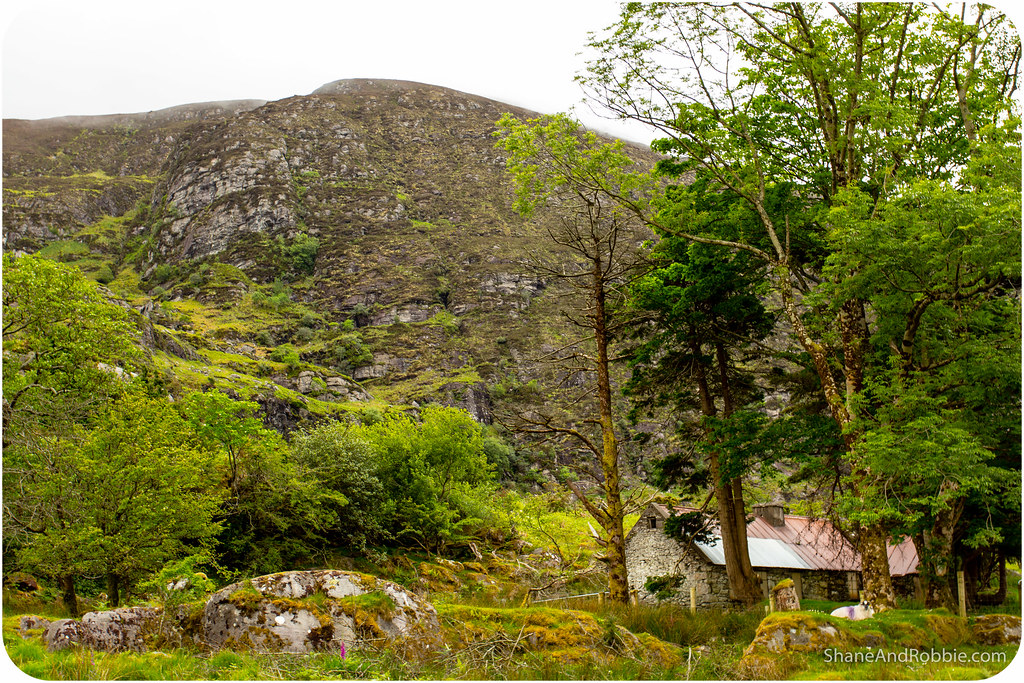 We arrived at Lord Brandon’s Cottage at about 1:00pm, just in time for lunch at the cottage tearoom and a brief wander around the grounds. 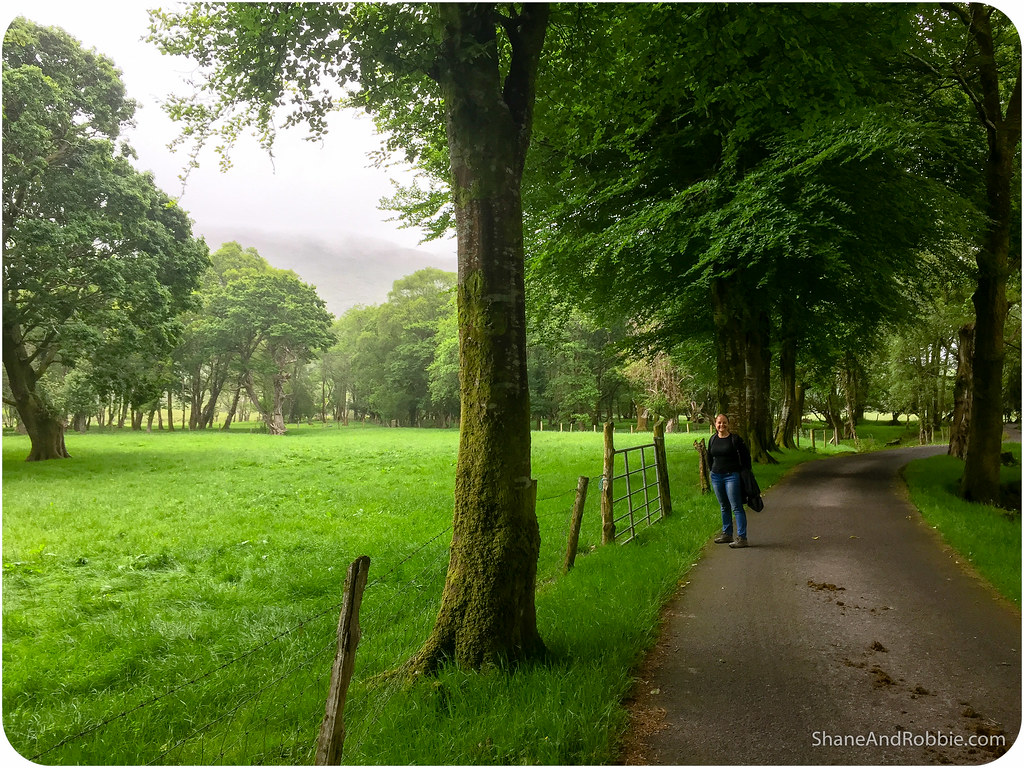 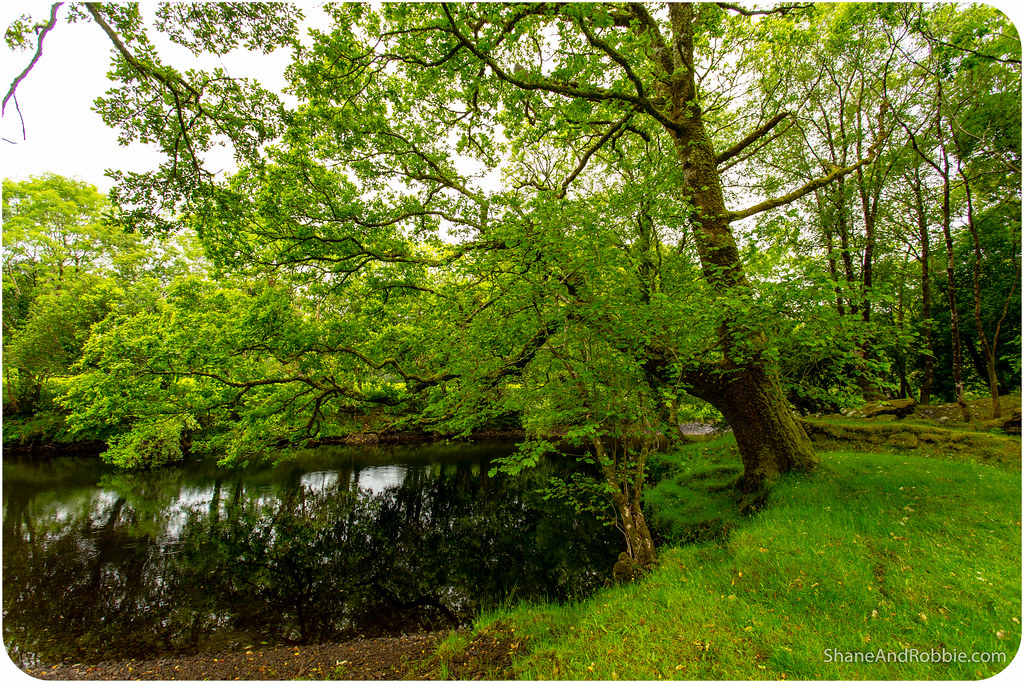 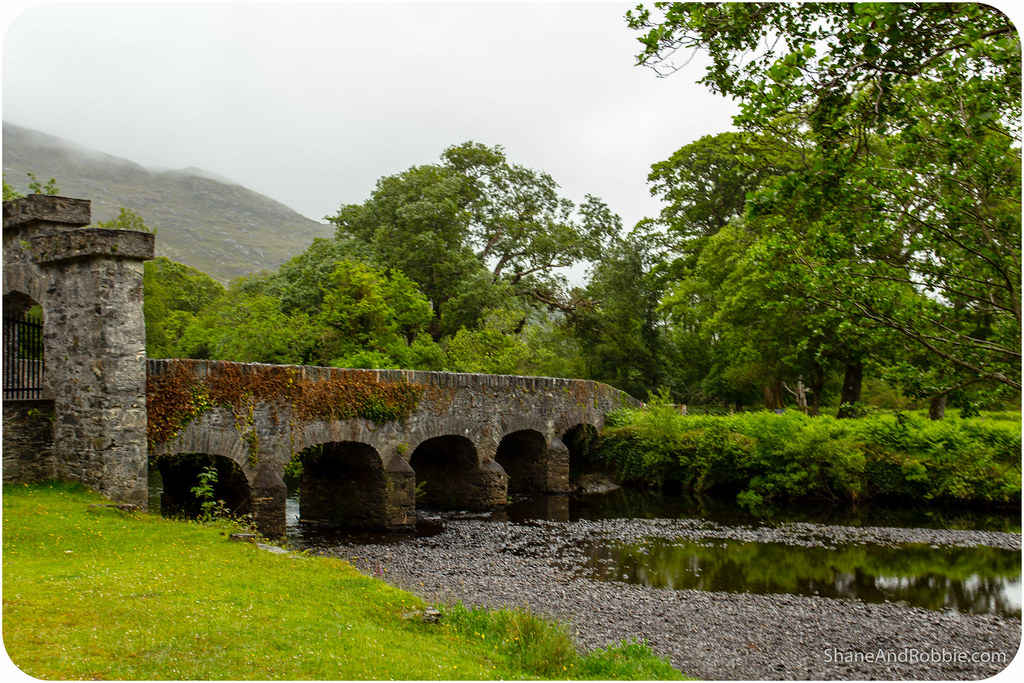 At 2:00pm we were called to the tiny pier where our boat back to Killarney township awaited us. Given how rainy and cold Irish weather tends to be (especially here on the western coast, where the winds and clouds come straight off the north Atlantic), we fully expected the boat to be an enclosed, comfortable vessel, complete with heating and a small restroom. Man were we wrong! 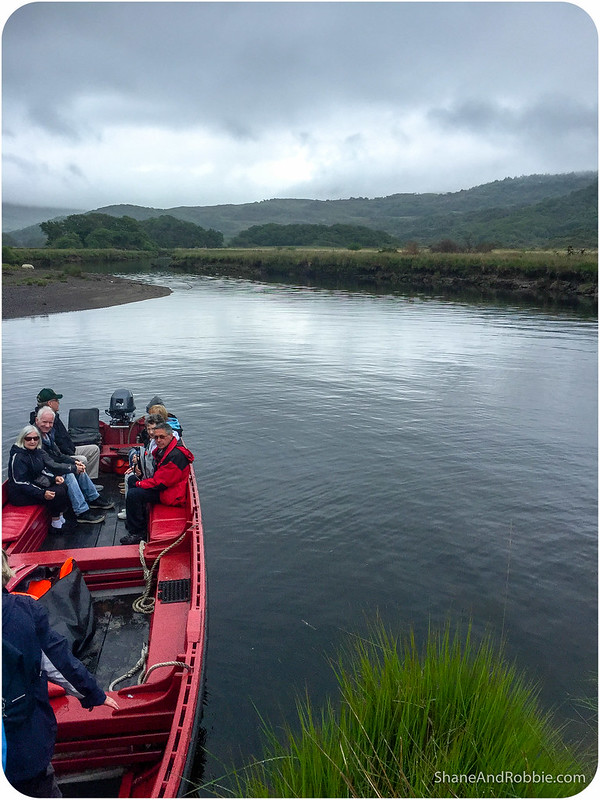 Our vessel was a traditional fishing boat, used by fishermen for centuries to trawl the lakes around Killarney. Open to the elements and not a bathroom in sight (unless you count the lake itself), this was no luxury vessel. One of the older ladies in the group, upon seeing the boat, exclaimed loudly “THIS is the boat? You’re joking right?!”. The tour guide/bus driver/boatman’s reply had us laughing out loud – without a word of a lie, he stared straight back at the silver haired lady and stated, “Sure looks like a boat, dun’t it?”*. She didn’t seem to sure about the whole thing, but our crazy tour guide/bus driver/boatman got her (and the rest of us) on board and without any further ado, we were off across the lakes of Killarney.
*We’ve noticed since arriving in Ireland that people here are incredibly friendly and helpful, but their customer service skills do not carry to obsequience. Also, it pays not to take yourself too seriously in Ireland – they make fun of EVERYTHING and EVERYBODY. Aussies are similar, so WE love it here, but a few of the tourists we’ve encountered here seem to struggle with this lackadaisical and irreverent approach. 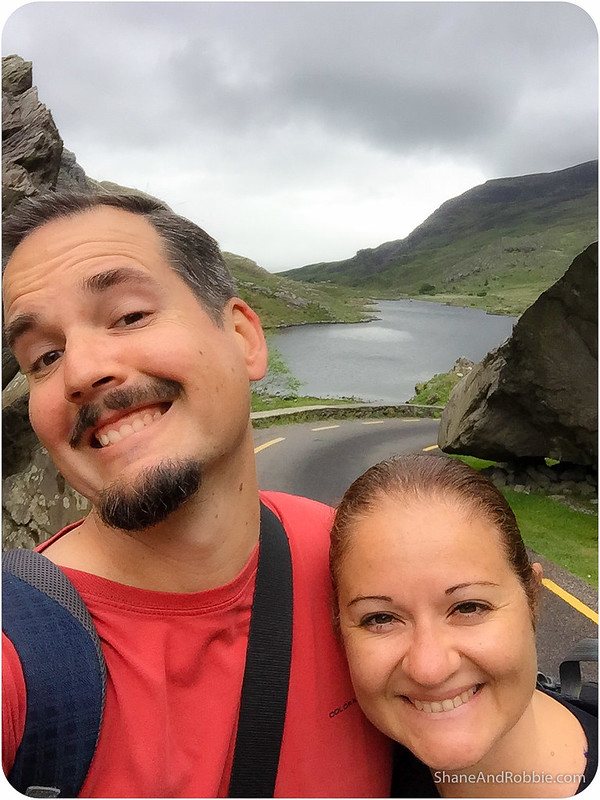 Central to Killarney National Park are the famous Lakes of Killarney, which cover about a quarter of the Park’s total area. There are 3 lakes: Upper Lake, Muckross Lake and Lough Leane. This afternoon we crossed all 3 lakes, blithely navigating the narrow inlets that link all of them together in our flat-bottomed boat. At one point the water got so shallow we all had to get out and walk a few hundred metres so the skipper could get the boat through the channel. 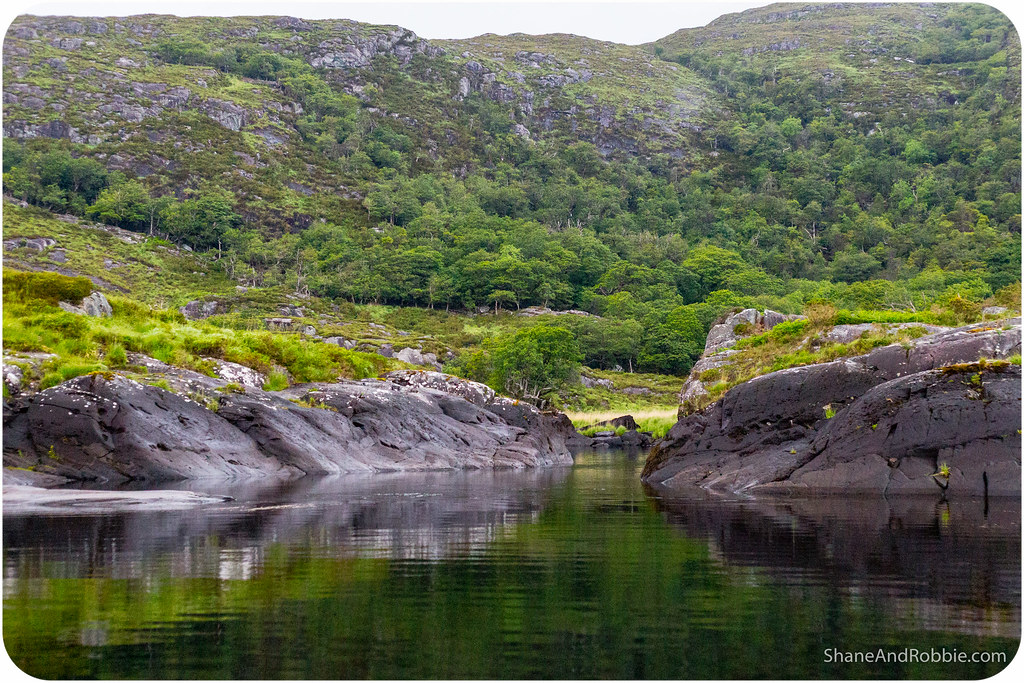 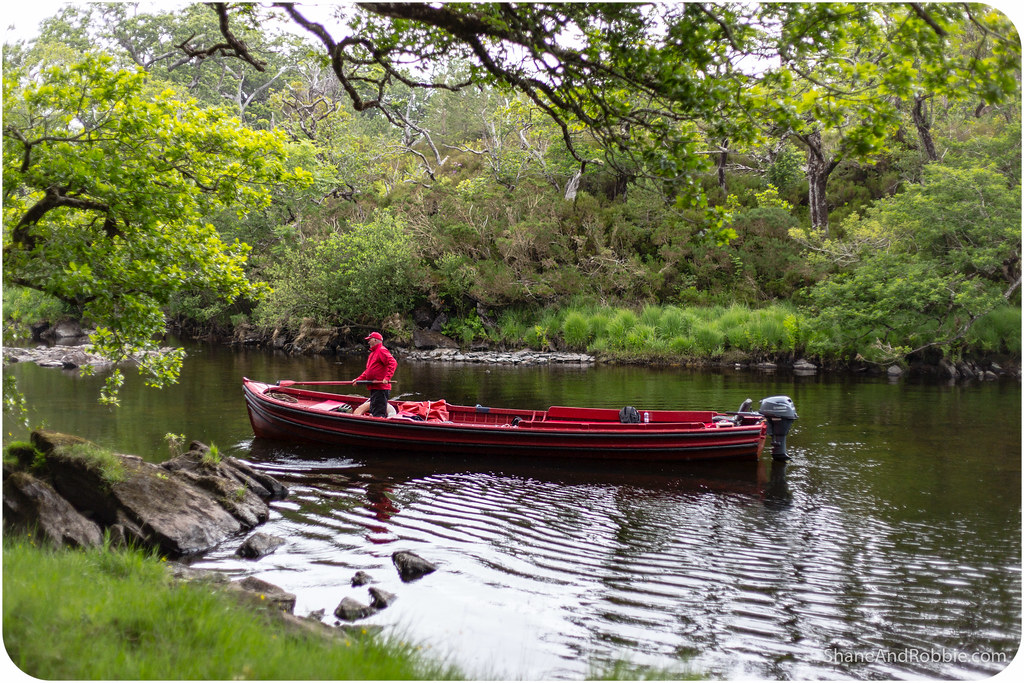 All together the boat trip took about 1.5 hours, with the first hour providing fascinating access to vistas of high mountains, soggy marshlands and densely forested islands. 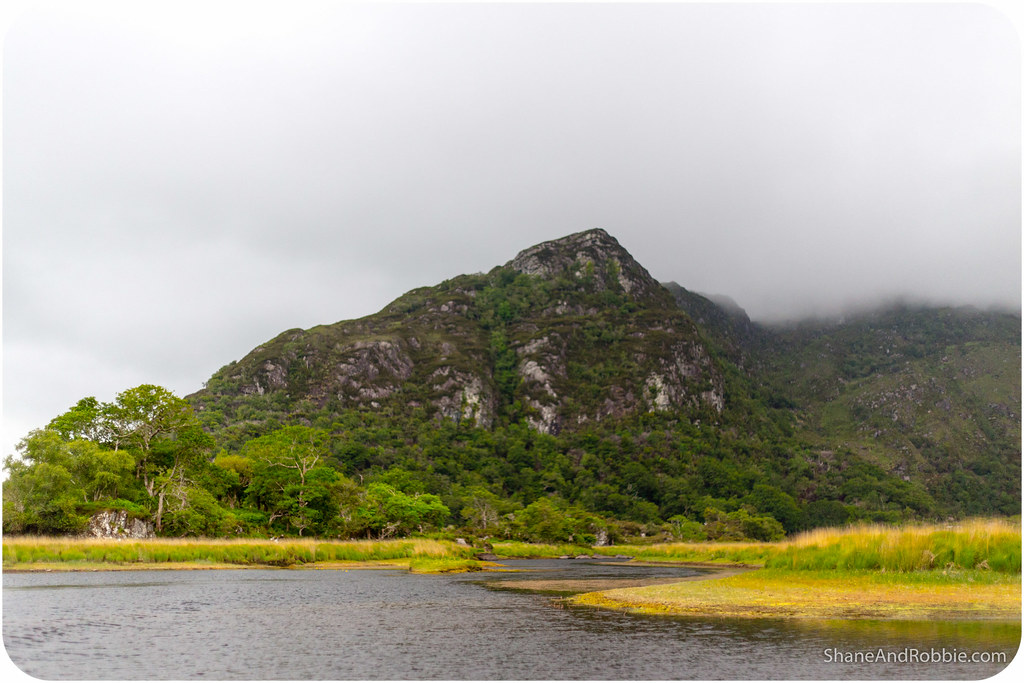 About half way across Lough Leane, however, the skies opened up and the rain that had been threatening all day finally arrived. The picturesque scenery quickly disappeared behind a blanket of cloud cover and our boat trip soon got REALLY uncomfortable. Half an hour of boating through the wind and rain and we finally arrived back in Killarney where our little old bus awaited us. 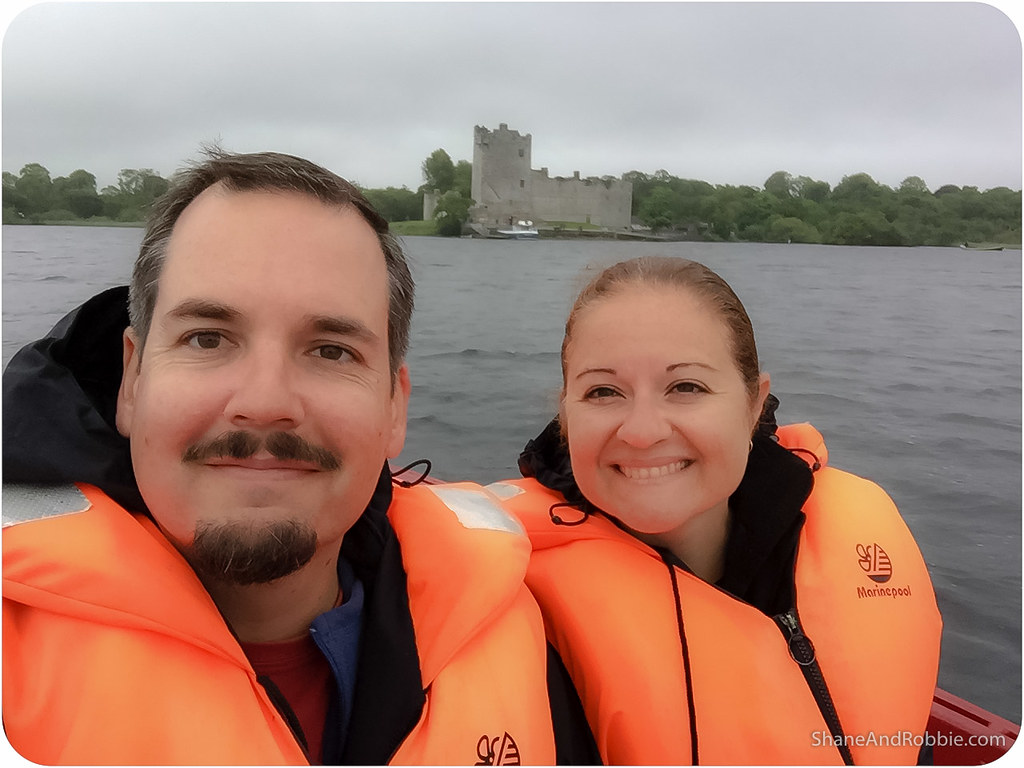 We were quickly bundled out of the rain and onto the bus, and now we’re back at our B&B towelling our hair dry and looking forward to something warm and hearty for dinner (Irish stew tonight? Or maybe some beef and Guinness pie?). Where ever we end up for dinner tonight, no doubt it will be warm and inviting, and we’ll have ample opportunity to sit and reflect on another awesome day in Eireann!