The Ireland you see in postcards and on TV exists! Impossibly green hillsides, blue skies peppered with fluffy clouds, and an ocean that goes on forever. This, ladies and gentlemen, is the Dingle Peninsula at its best… 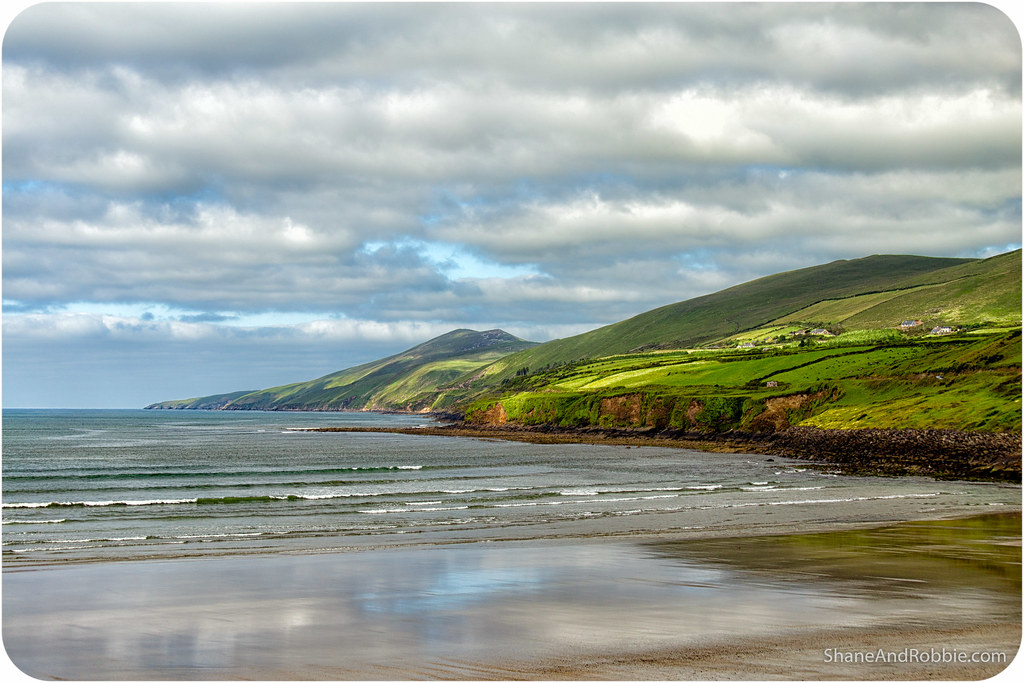 The Dingle Peninsula is an isthmus just north of Killarney that stretches almost 50km into the Atlantic Ocean. We decided to hire a car and explore this corner of Ireland on our own today, rather than do a tour, just so we’d have the freedom to explore what and when we wanted. We’re so glad we did! It was a beautiful day and we got to spend it enjoying some of the most picturesque scenery Ireland has to offer. 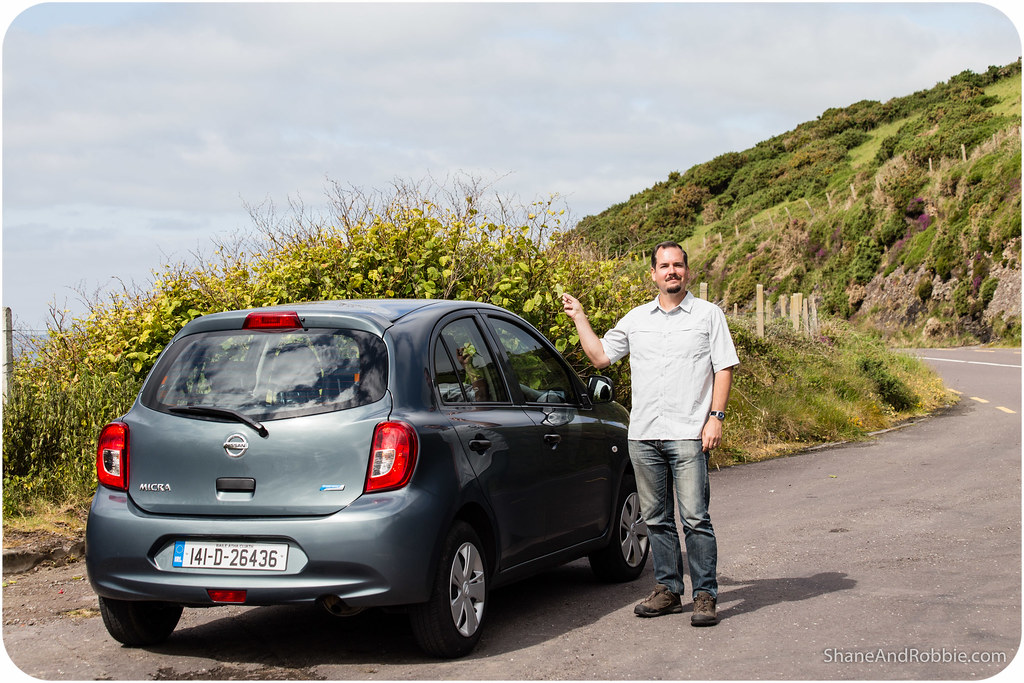 Named after the only large* town on the promontory, the Dingle Peninsula is dominated by the range of mountains that form its spine. One of Ireland’s highest mountains, Mt Brandon (altitude: 951m), forms part of the beautiful high ridge that dissects the peninsula from east to west.
*If 2,000 people counts as “large”, that is. 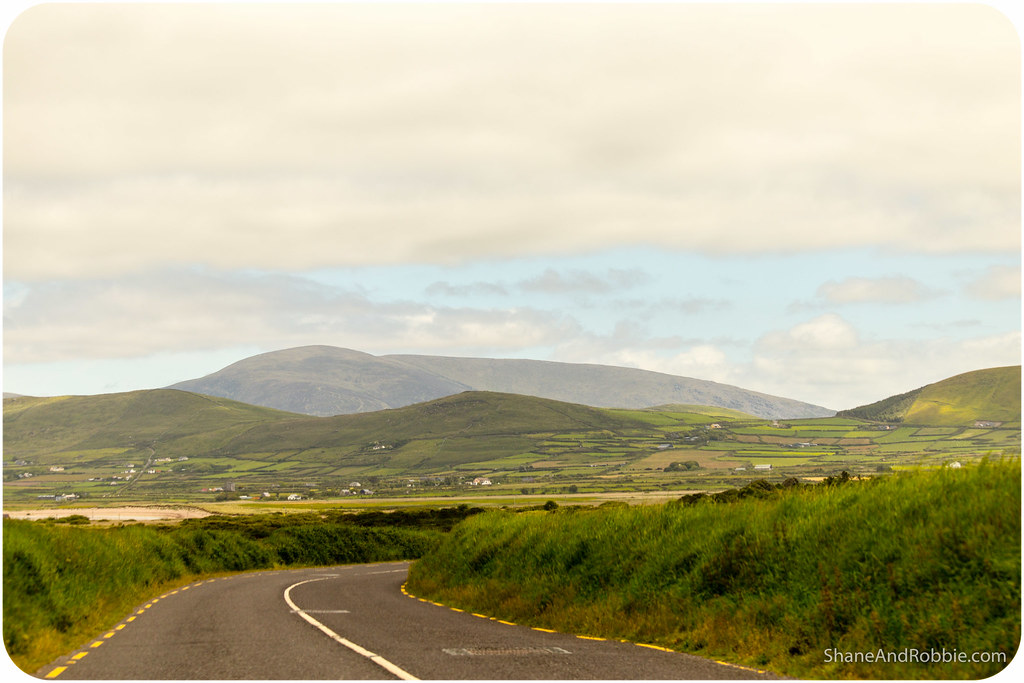 The entire peninsula is home to only 10,000 people, most of them farmers. The land in this part of Ireland is rocky and unsuited to crops; sheep happily graze on the grasses that grow between the rocks however. There is no doubt that this is one place where sheep outnumber the people! We had to take extra care to avoid the ovine pedestrians as we drove along some of the narrow country roads today. 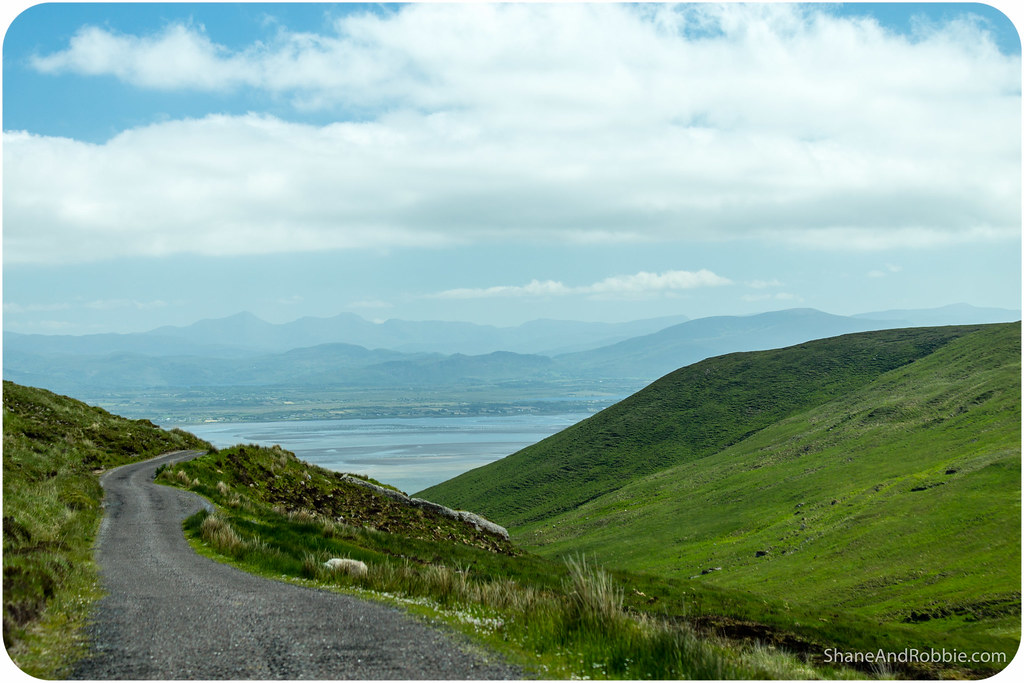 The beauty of the Dingle Peninsula lies in its contrasts: there’s a seemingly endless supply of sandy white beaches, sheer black cliffs, rolling green hillsides, rocky outcroppings, and deep blue lakes to feast your eyes on. 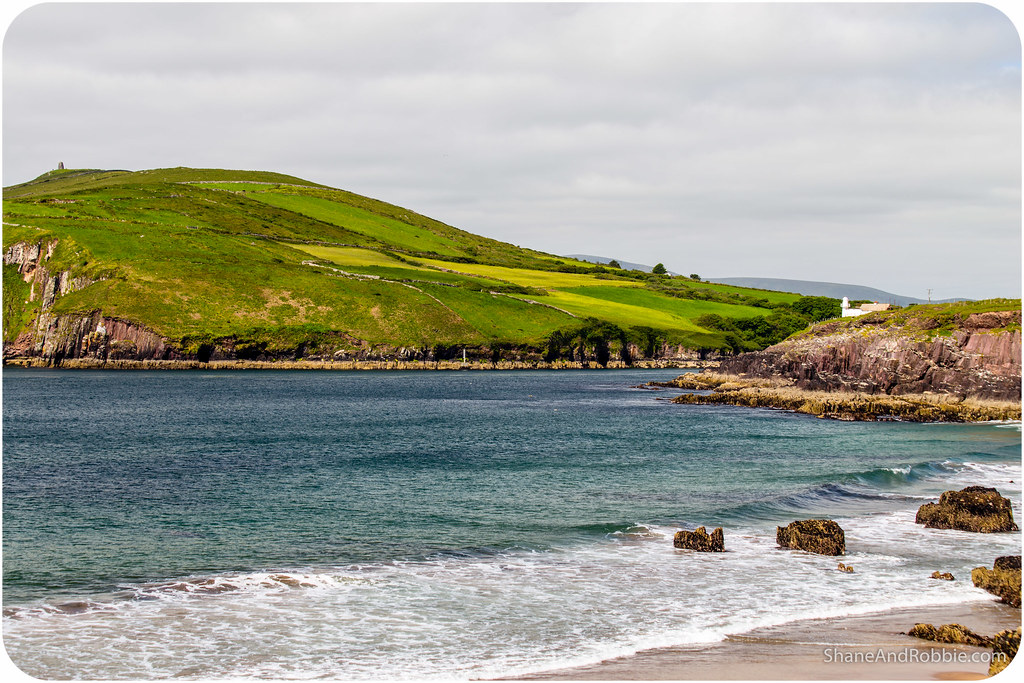 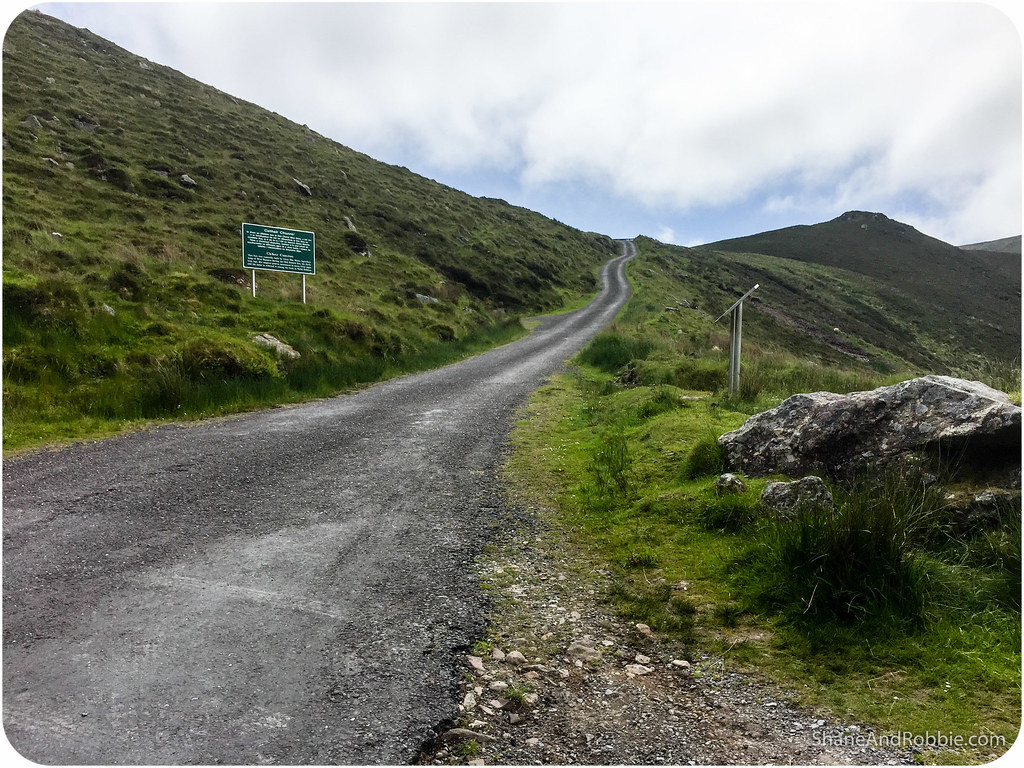 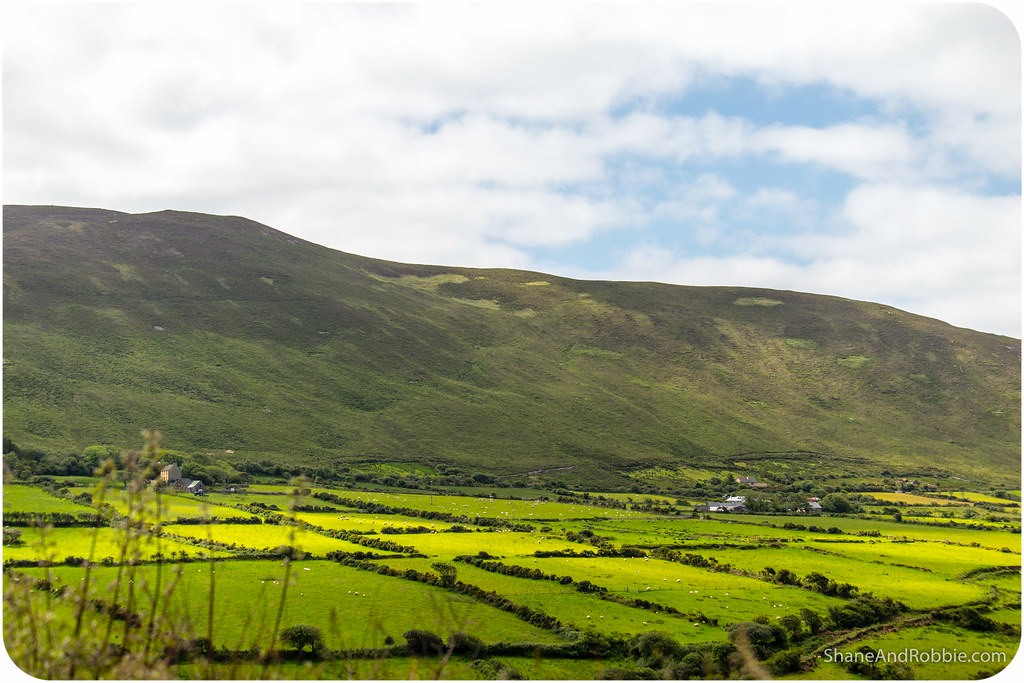 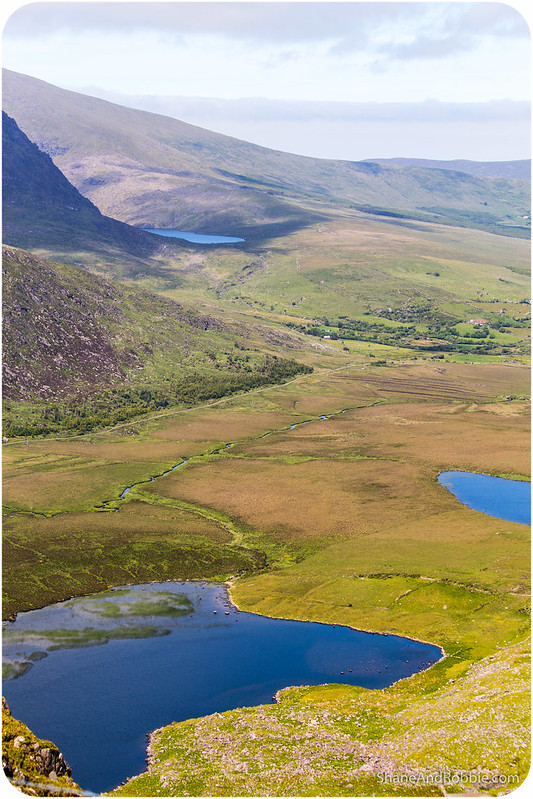 We started out this morning after another hearty “full Irish” breakfast (sweet Jesus – soooo much food….) and drove out of Killarney, through the town of Castlemaine* and across to the hamlet of Inch. Famous for its 5km stretch of pristine beach, Inch was lovely. The thing we’ll always remember about Inch Beach, however, were the guys out in the ocean surfing. It may be summer here but it ain’t exactly hot and the water temperature is nigh on freezing (by our standards any way); and yet, there were half a dozen surfers out there today in their wetsuits catching waves! Admirable perhaps, but also slightly CRAZY!

*Best known to Aussies for its ties to the brewery of the same name back home and because this is where Ned Kelly hailed from.

West of Inch the views just got better and better. The jagged coastline was magnificent, and the views across the fields captivating. 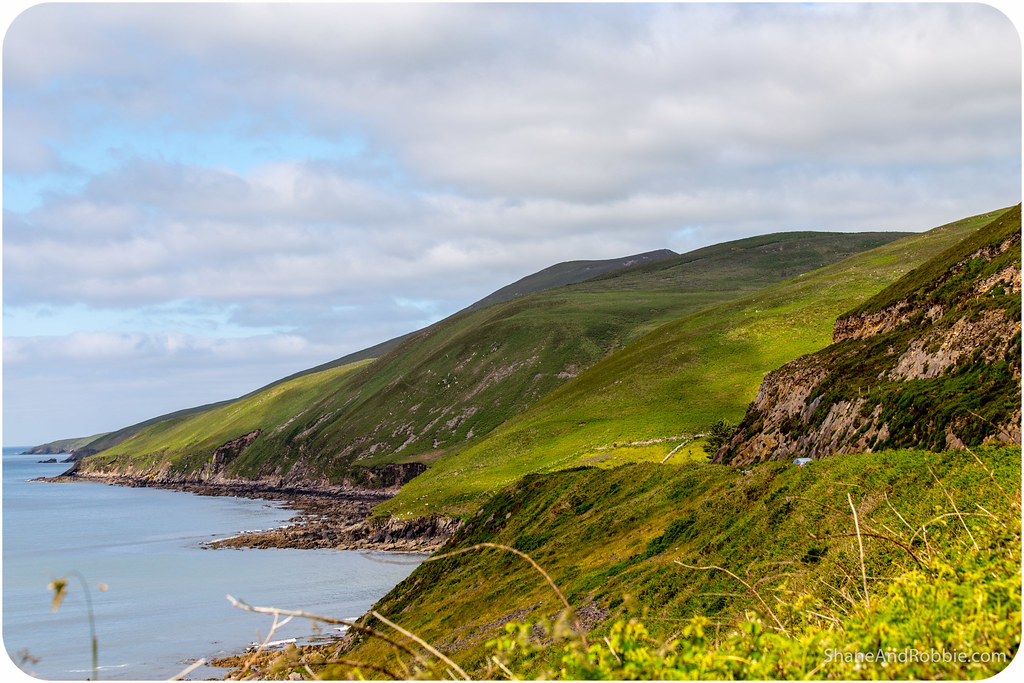 As we rounded the southern end of the peninsula at Slea Head a couple of islands came into view. We stopped at a tiny café* to enjoy the view and some home-made scones and heard from the owners that the larger island, Skellig Michael, contains the rocky remains of a 6th century monastic settlement. Next to it the smaller island, Little Skellig, is a breeding ground for gannets and other sea birds.

*”Cafe” is perhaps a bit of a stretch. The elderly couple who ran the place had basically converted their front room into an indoor seating area and put some table and chairs outisde their front door with a sign advertising tea, coffee and fresh scones. They were lovely but were both easily 80 in the shade! Must be worth their while though, giving over their dining room and front yard to paying customers for the summer. We saw a dozen people come and go just in the half hour we were there! All we can say is the coffee was good, the scones delicious, and the service solicitous. So good on ’em! 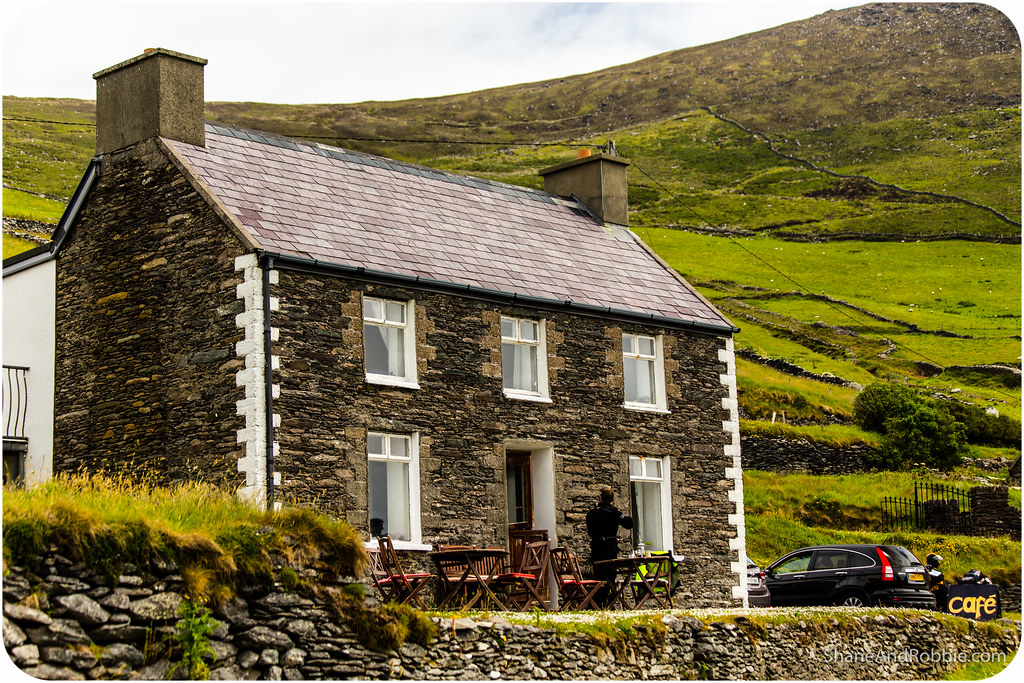 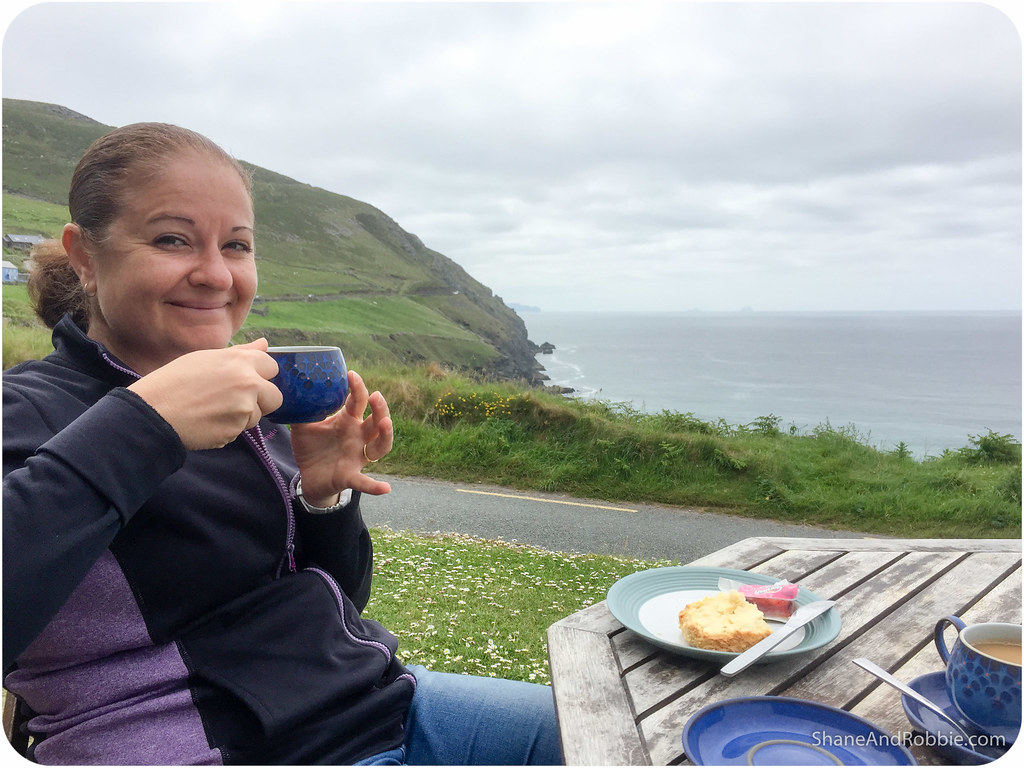 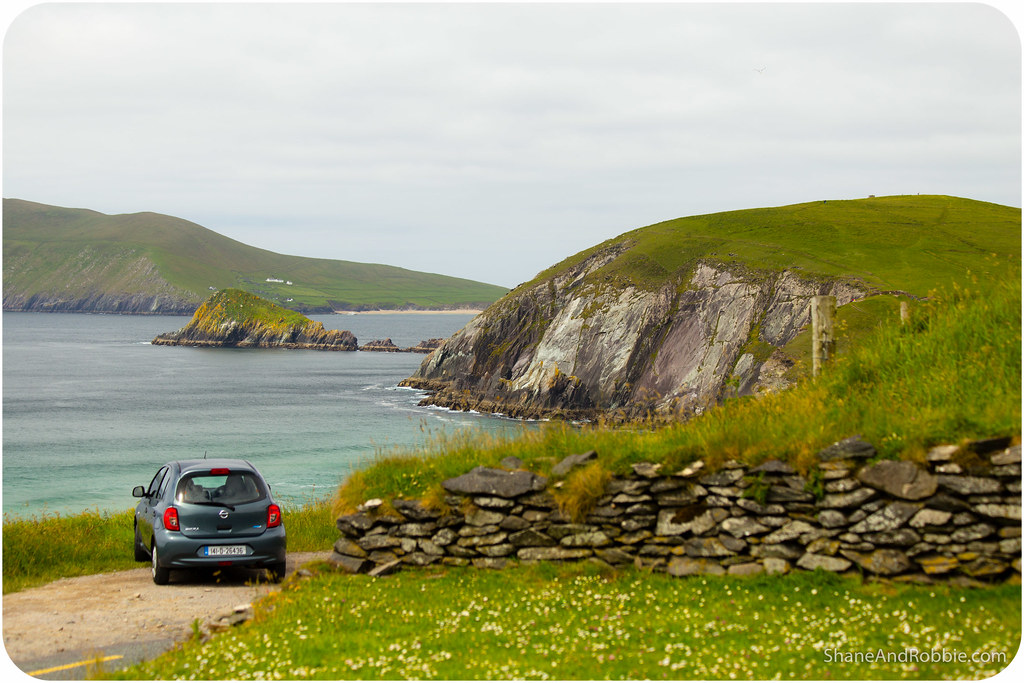 Not being in any rush we took every little turn we could to explore as much as we could of Dingle. At one stage we stumbled across a tiny, windswept beach near the village of Dunquin where the waves were crashing against the rocks, sending salt spray metres into the air. Awesome to watch! 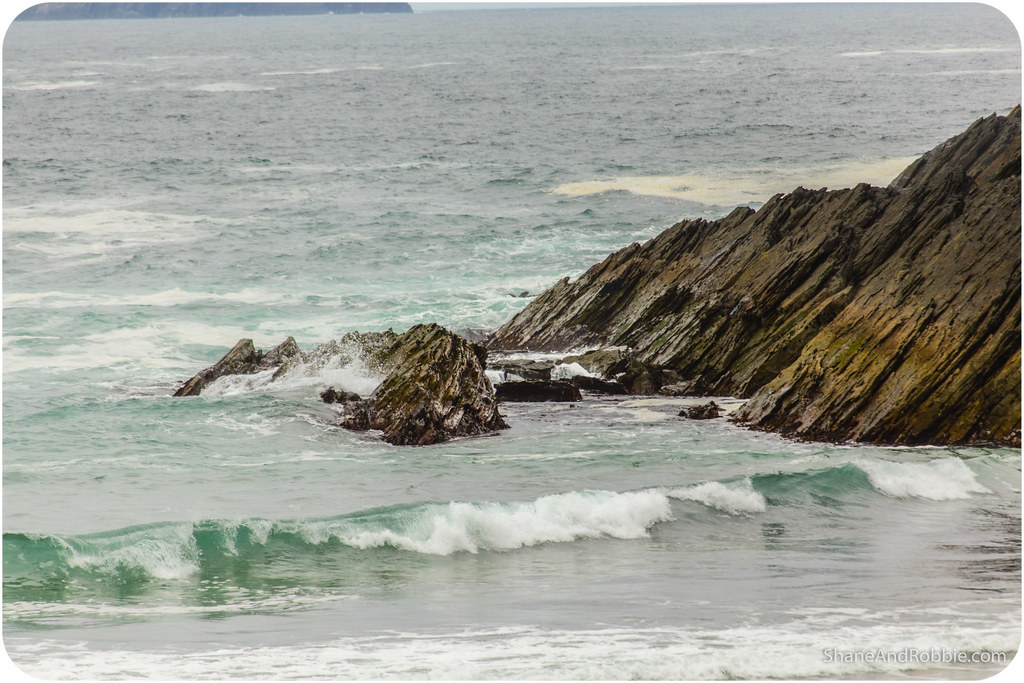 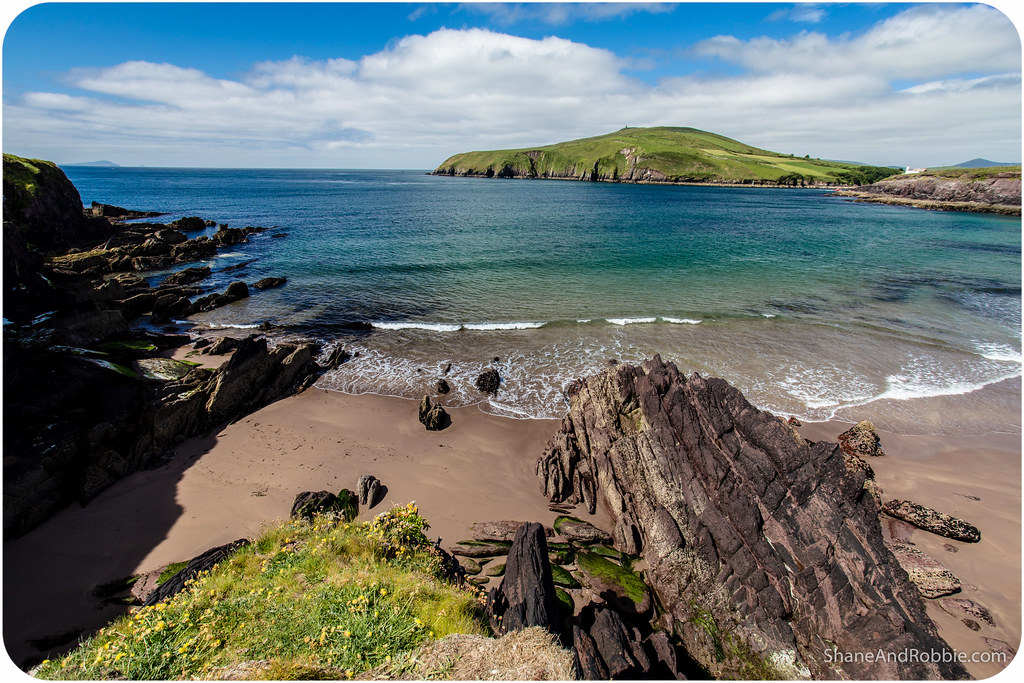 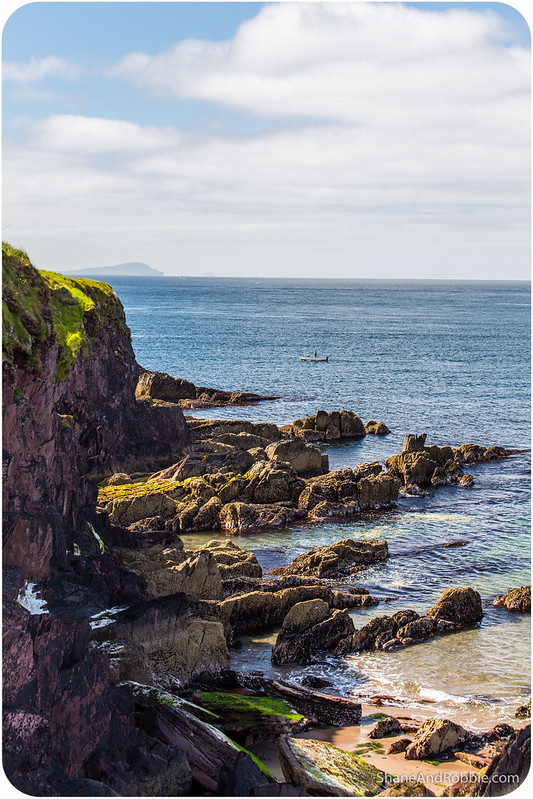 Fishing was once the dominant industry around Dingle, but now its tourism that keeps things ticking along. The peninsula’s popularity means there are coach-loads of tourists that visit every day. To avoid the crowds we set out very early this morning (i.e. by Irish standards 9:00am IS very early!); this meant we were always an hour or 2 ahead of the buses and had the roads, the beaches, and the views virtually to ourselves. 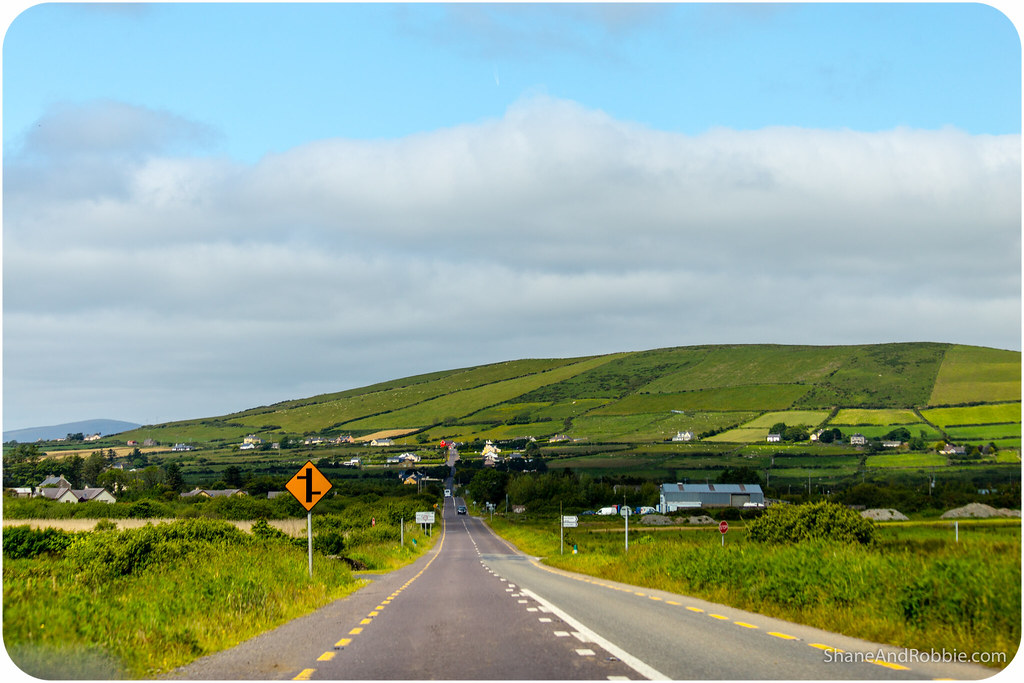 The only place we ran into crowds of people was Dingle township itself. We had thought to stop there for lunch on our way back through, but with no parking spaces or free café seats in sight, we chose to keep moving through Conor’s Pass to the northern side of the peninsula. 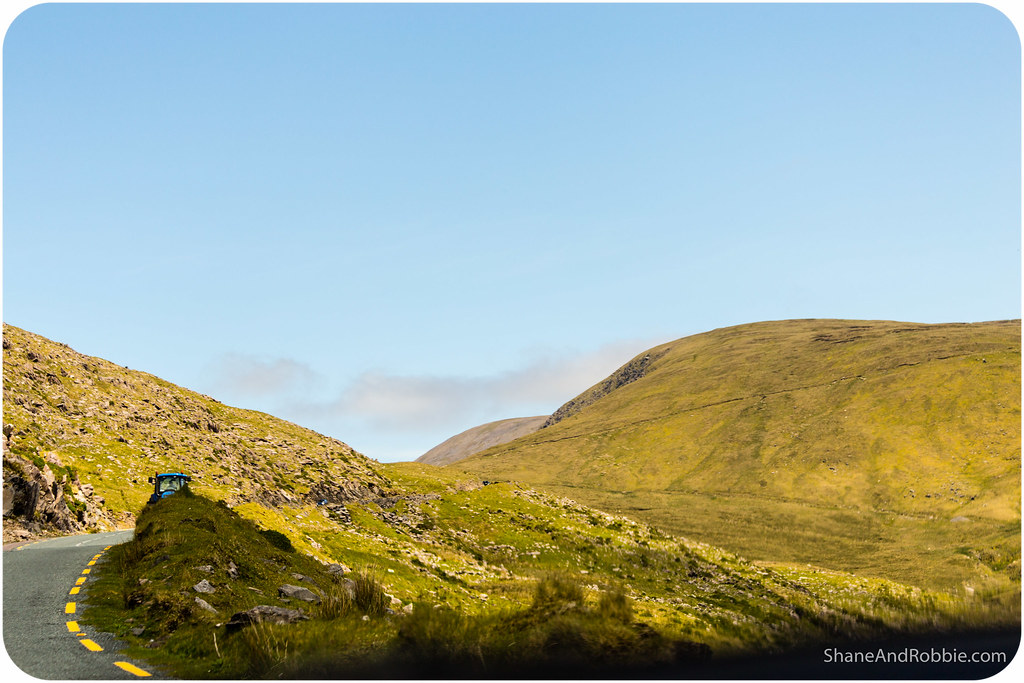 Conor’s Pass is a high mountain pass which allows the Dingle Peninsula to be traversed from south to north (or vise versa). The road up to the pass was narrow and winding, and all along signs warned that vehicles wider than 1.8m and/or weighing more than 2 tonnes should not proceed. That gave us some indication of how narrow the road through the mountains was going to be! 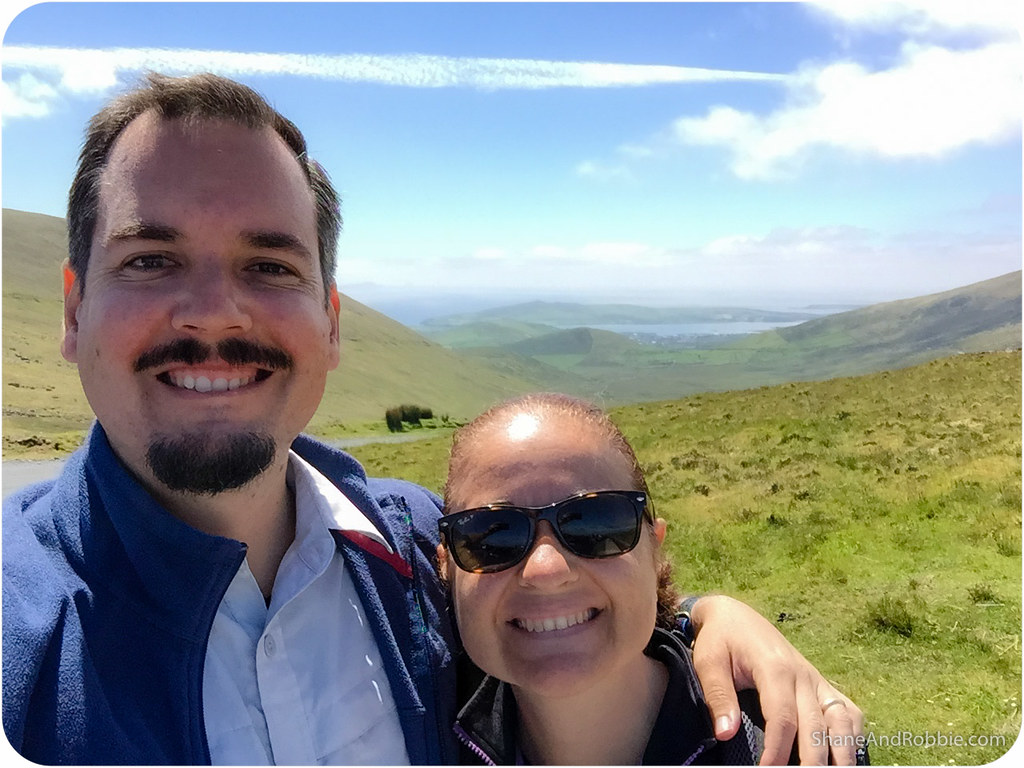 In our tiny rental car we squeezed through the gap between cliff-face and precipice just fine, and the views from the road and at the very apex of the pass were well worth it. We could see all the way to Dingle township on the south and all the way to Castlegregory to the north. 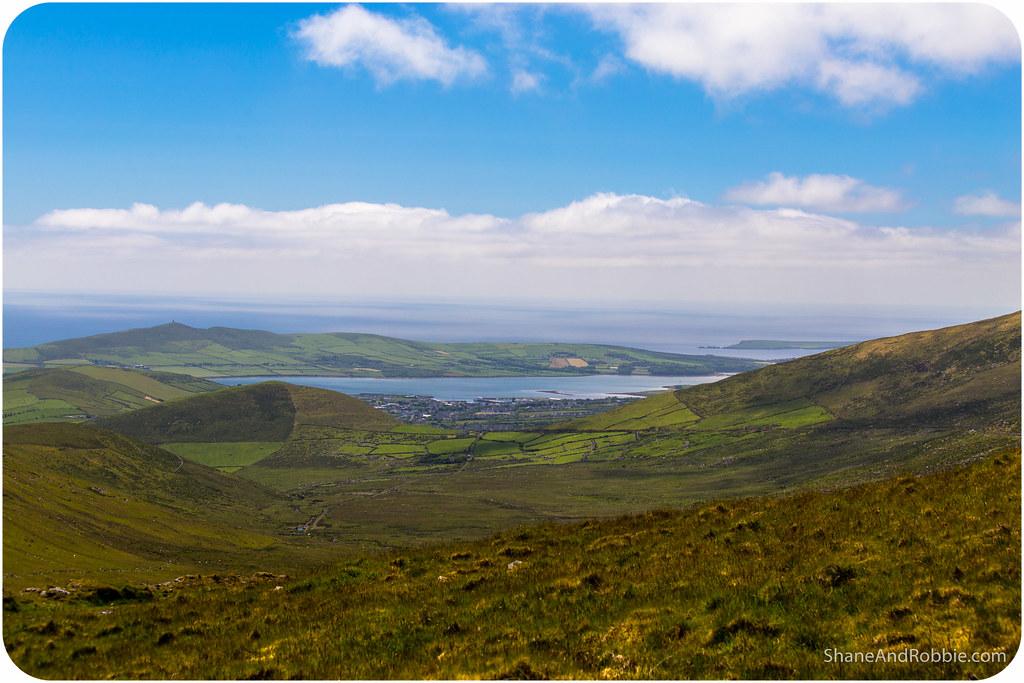 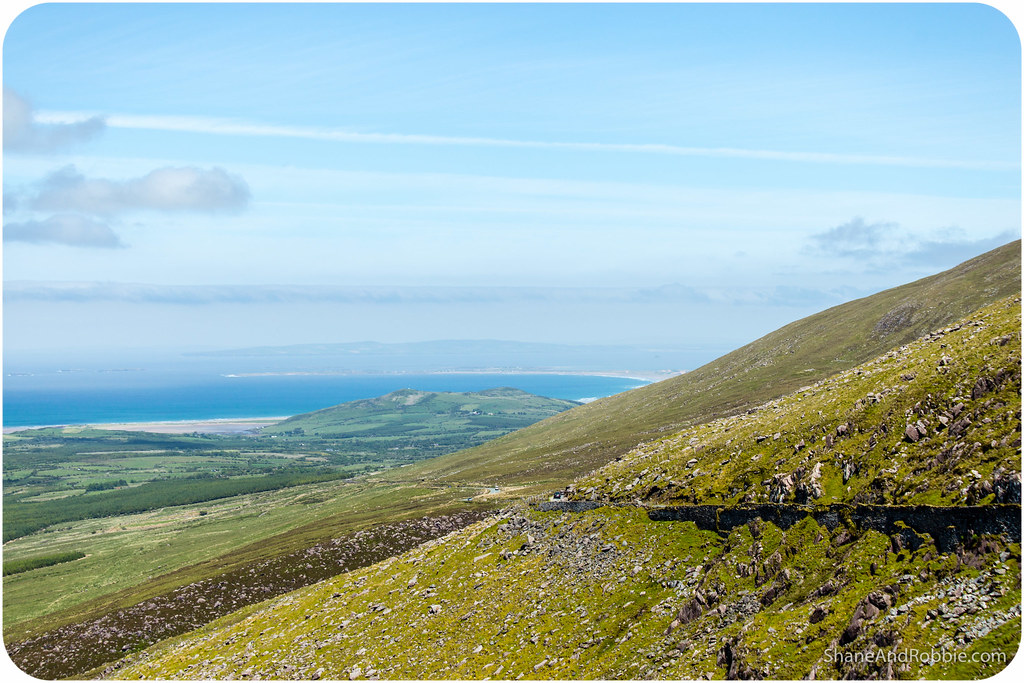 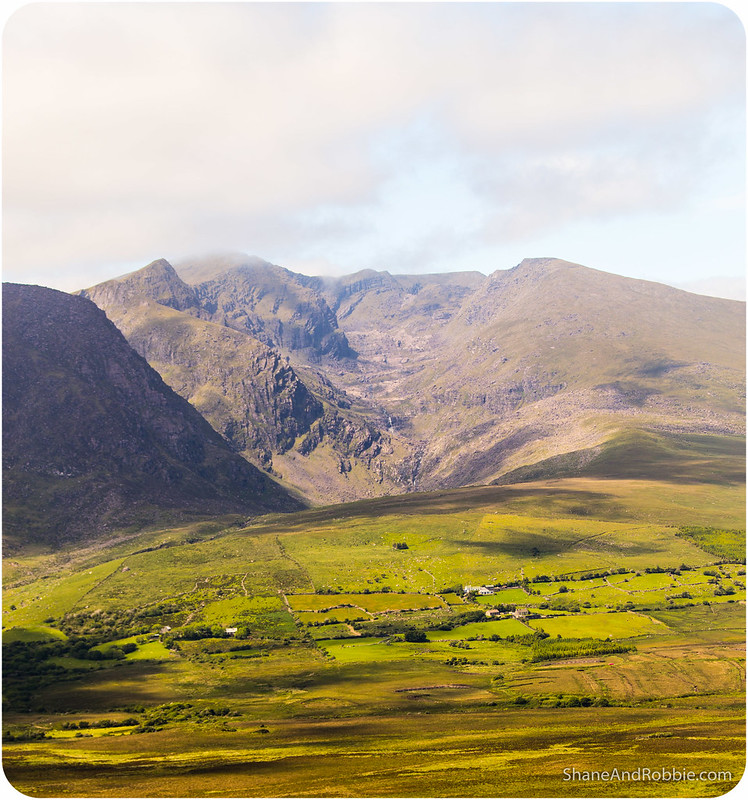 Once through Conor’s Pass and back down on the coast we turned east and then south, bound for Killarney once again. On the drive back, rather than follow the main road, we took a few country lanes instead – just to see where they ended up. We made it back to civilisation just fine and along the way discovered some of the most epic scenery of the day! Love serendipitous discovereis like that! 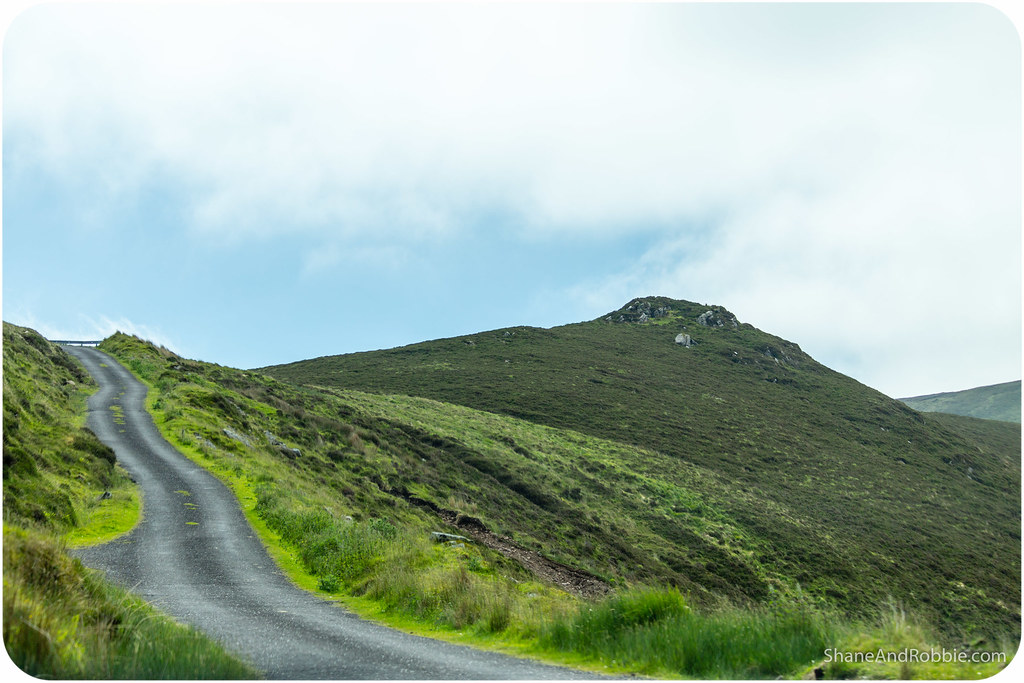 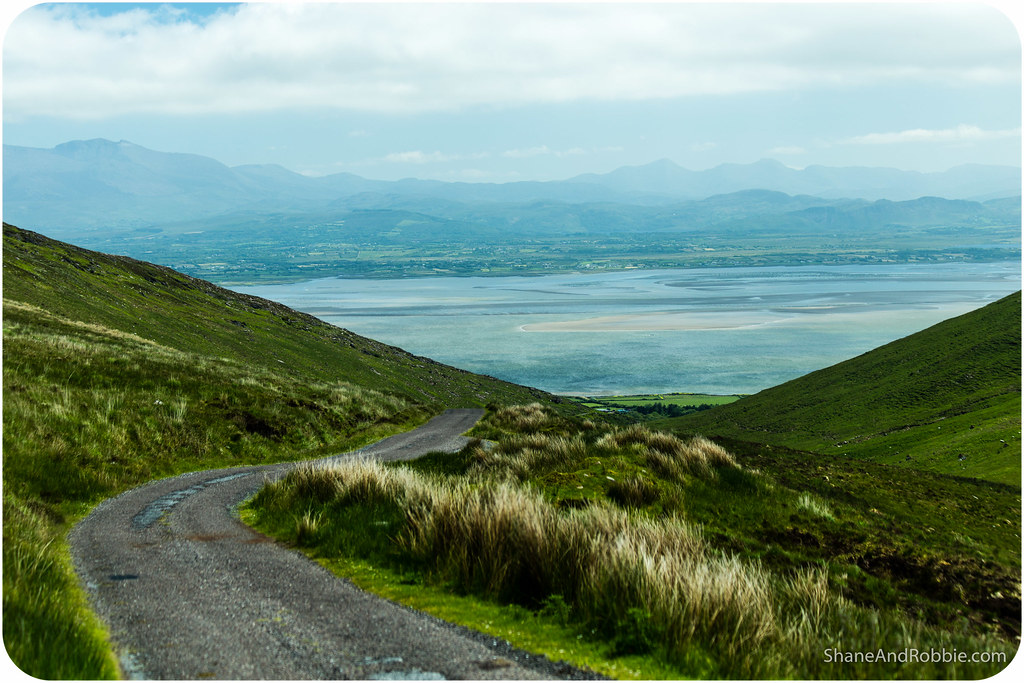 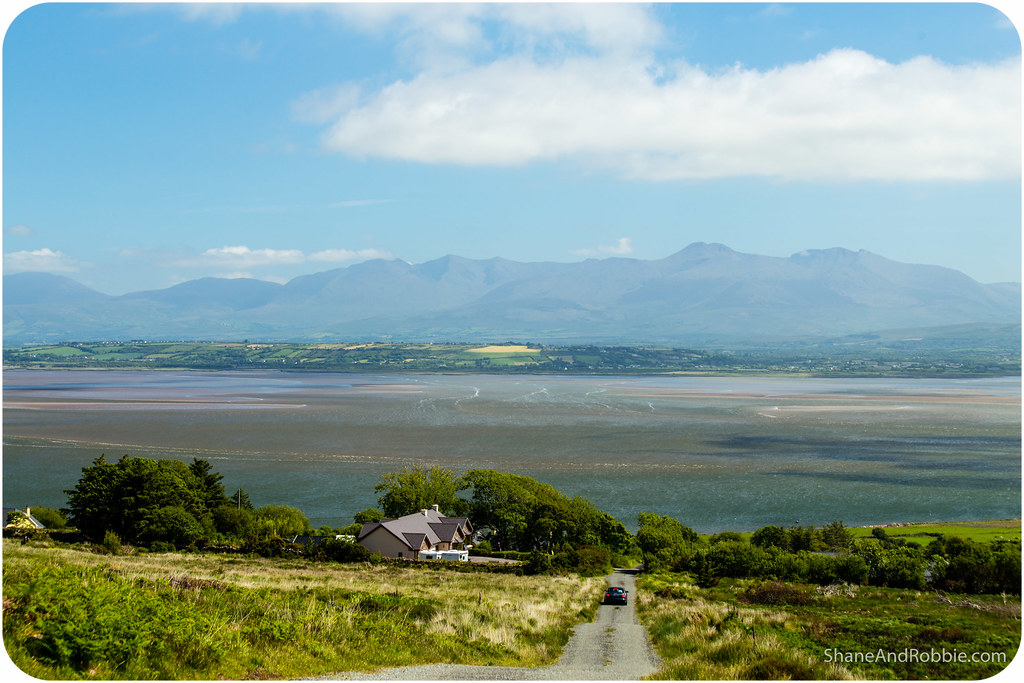 It rains 2.5m a year in Dingle (which is why it’s so green!), so we feel blessed to get a day like today. What a glorious day to be driving around the Irish countryside! Can’t wait to do more of it… 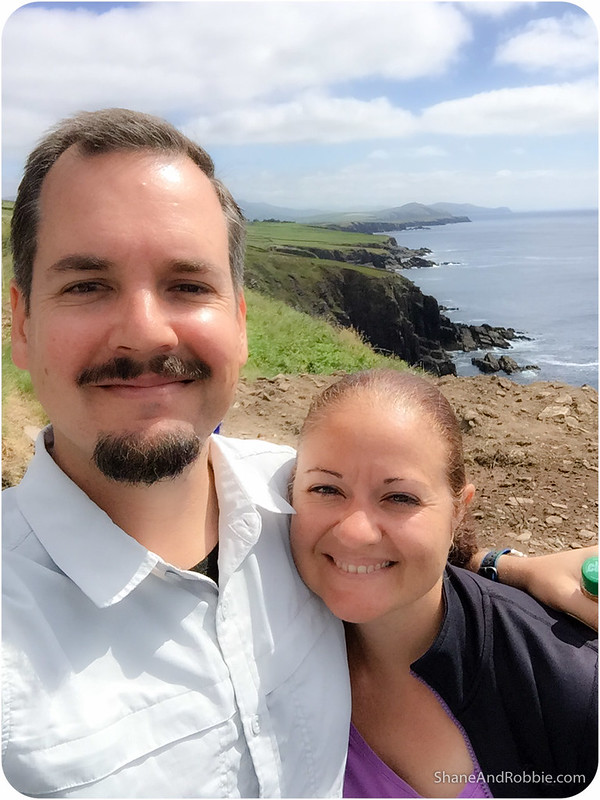