Welcome to Dublin blog fans! This city of 1.2 million is the thriving commercial, political and economic hub of The Republic of Ireland; it’s also our home base for the next few days. We got here around lunch time and spent our afternoon exploring some of the city’s livelier areas, straddling the River Liffey. There’s so much personality to the city, and the compact town centre thrums with energy. It’s great! At the same time, however, it doesn’t seem TOO busy, and the pace is certainly not chaotic (granted, it’s not as laid back as in the smaller Irish towns we’ve visited, but it certainly isn’t hectic around here!). All round, this seems like a pretty easy city to live in! 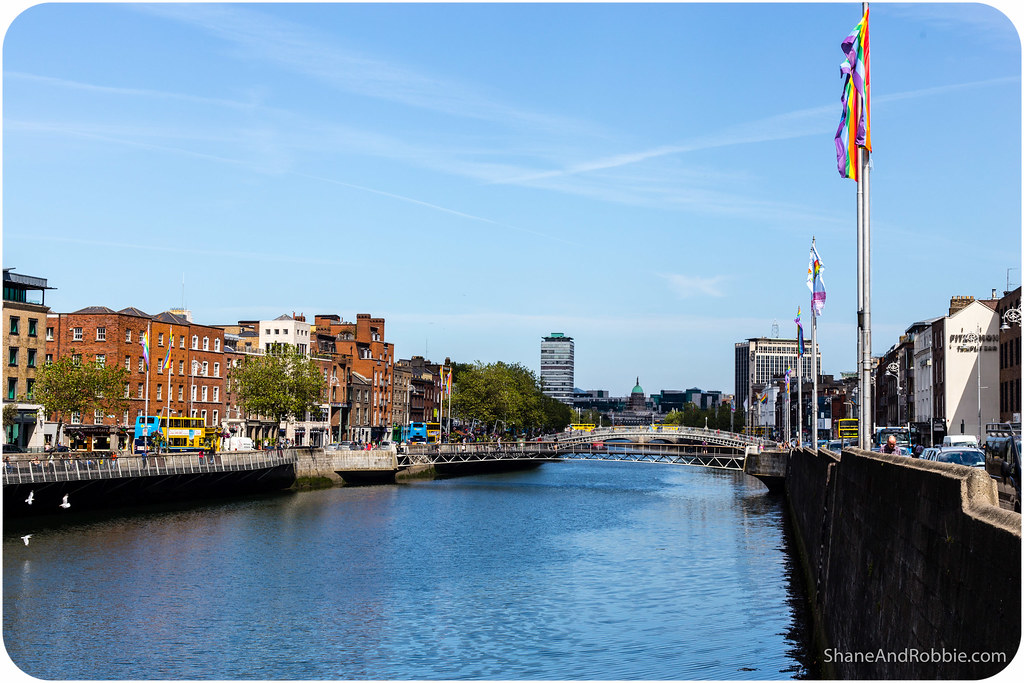 We left Galway and the dramatic scenery of Connemara, Moher and The Burrens behind, speeding out of town by train towards Dublin. As we headed east and the cloudy Atlantic weather lost its influence, we found ourselves staring out across green fields and blue skies. Dotted with cows, sheep and farmhouses, the landscape really was picture postcard perfect. 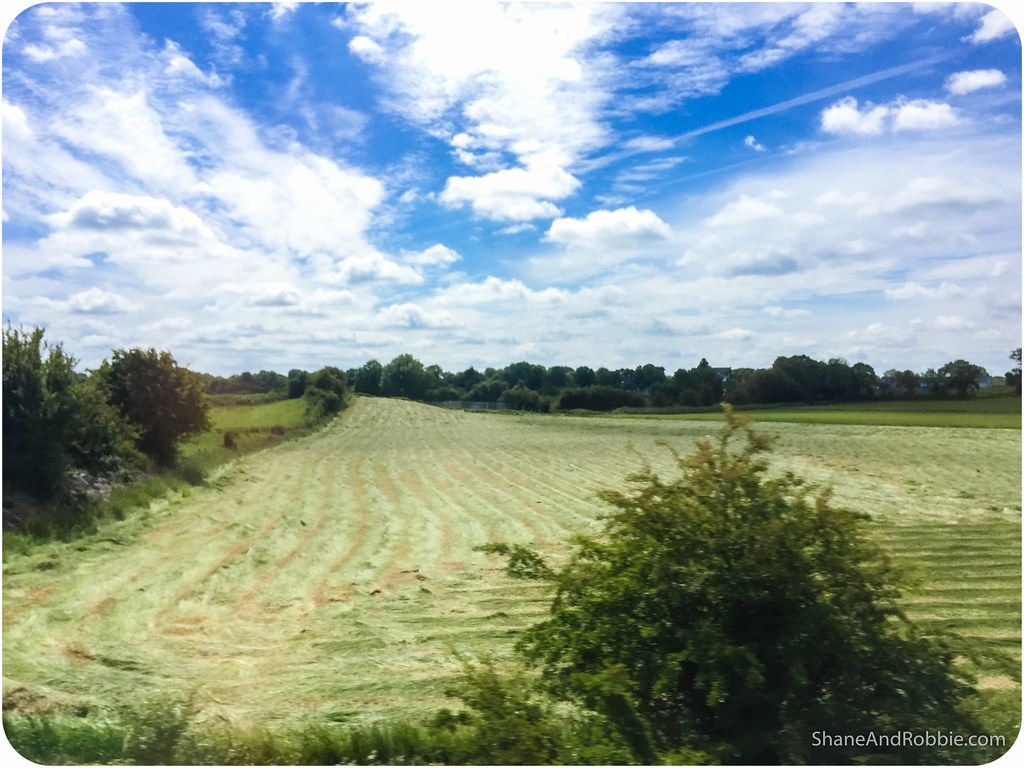 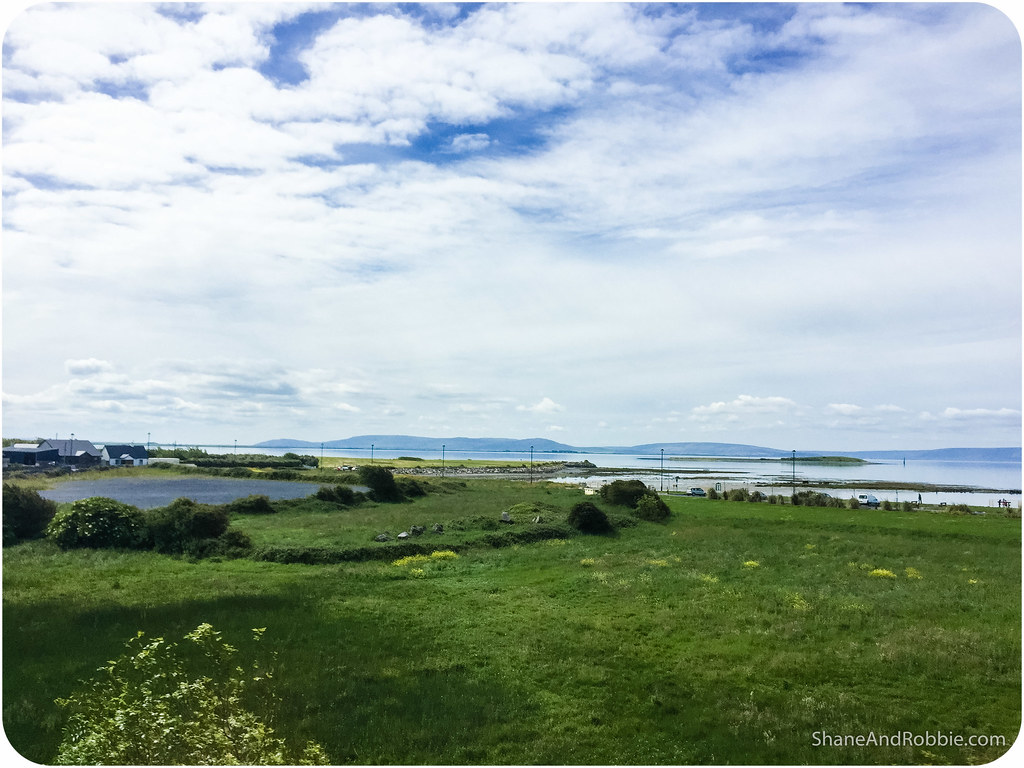 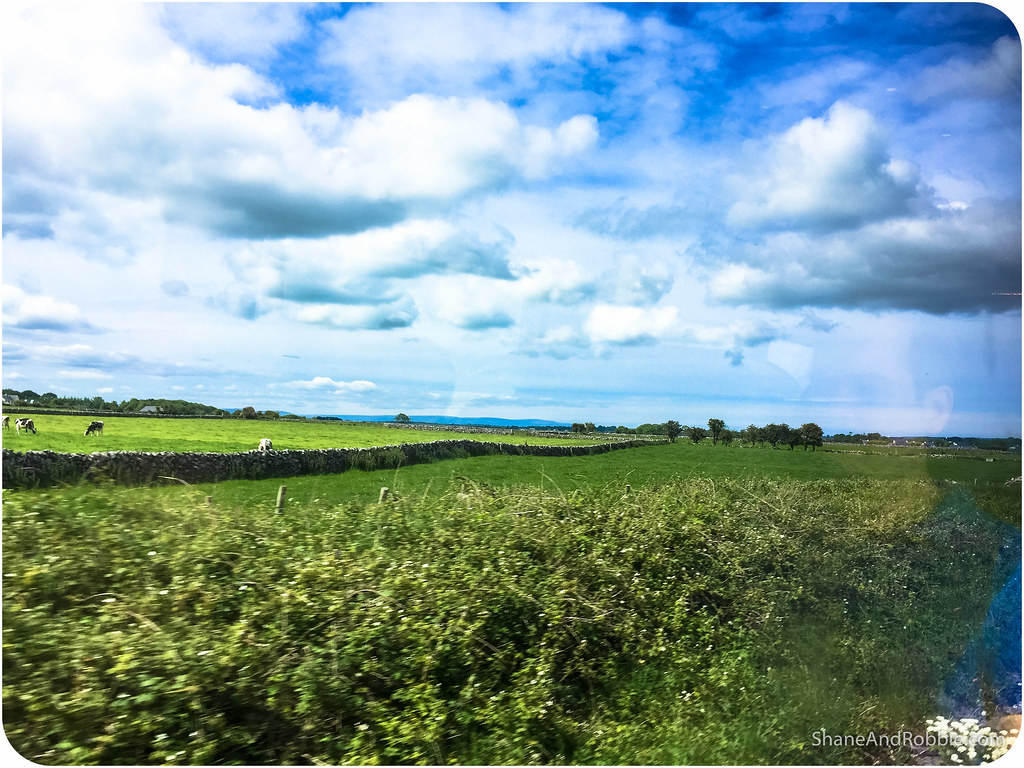 We arrived into Dublin’s Heuston station and caught the tram across town to our hotel. Turns out our hotel is in Dublin’s Red Light district. *SIGH* Seems THAT’S why the room rate was so much cheaper than other hotels… Luckily the hotel itself is great – quiet, comfortable, safe and secure, with a full Irish breakfast thrown in every morning for good measure. We’ve found ourselves staying in some of the, shall we say, less salubrious parts of town previously* and it’s been OK (not ideal, but OK). We just avoid being out and about in the wee hours of the morning, and keep our wits about us during the day.
*For example: Zurich, where Shane got propositioned by a gender-bending “lady of the night”; and Copenhagen where a fat ugly naked guy revealed himself to us and made our morning… SHUDDER. It’s one of the pitfalls of booking stuff on the internet – you never quite know what you’re going to get! 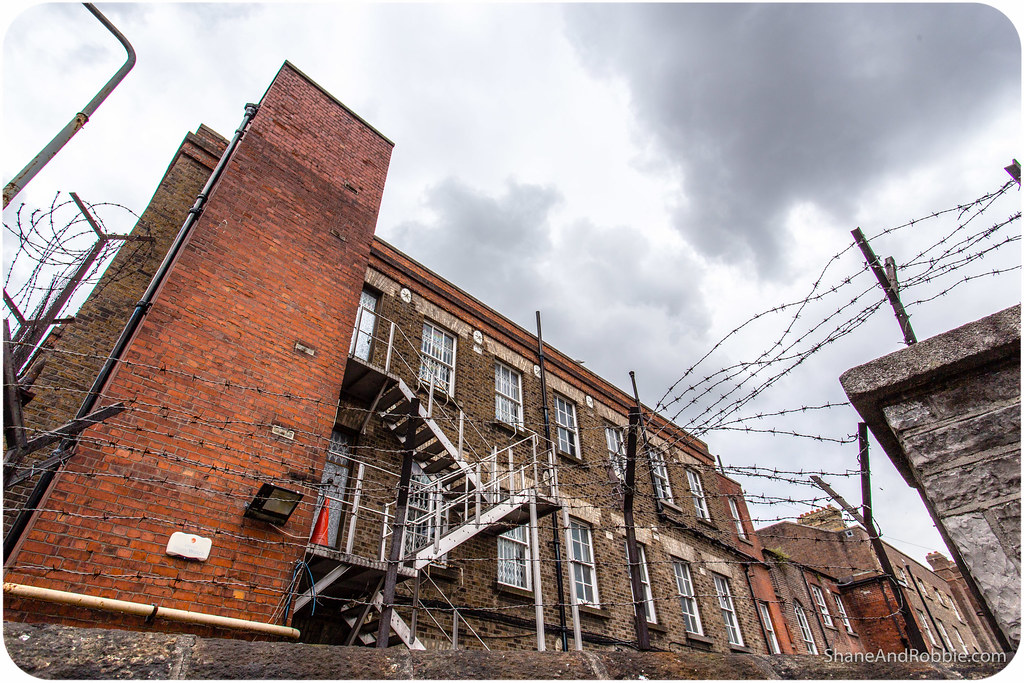 We’re staying north of the Liffey River, in the part of town traditionally the bastion of the working class (south of the river has always been more gentrified). Some of those classist division went by the wayside with the economic boom years of the 1990s/2000s (i.e. the years of The Celtic Tiger, when Ireland’s became the IT hub of Europe and investment in the country sky-rocketed), but something of the north/south divide persists. 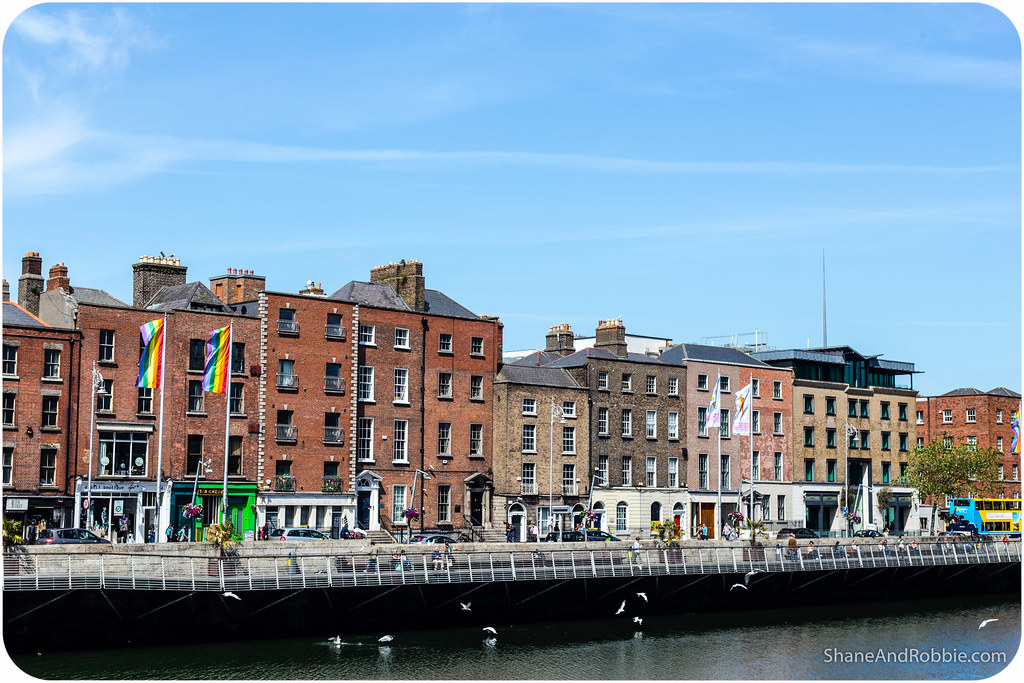 Once we’d dropped our bags off at the hotel we set out for some lunch and an afternoon of exploring. We started with our immediate neighbourhood and quickly discovered O’Connell Street, Dublin’s main thoroughfare. This wide boulevard has been the city’s main north-south road since the 18th century, and is lined with lovely buildings from every period of the last 300 years. 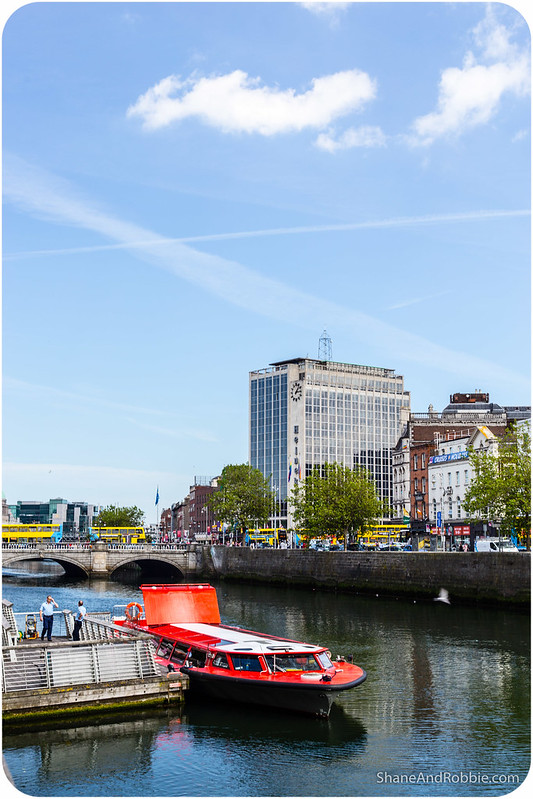 Named in honour of Daniel O’Connell*, there’s a large statue of the street’s namesake just near the river.
*Daniel O’Connell was an Irish nationalist leader of the early 19th century, often referred to as The Liberator. He’s revered here in Ireland for his work campaigning for Catholic emancipation, including the right for Catholics to sit in the Westminster Parliament. His work also led to the Act of Union (which combined Great Britain and Ireland) being repelled, paving the way for Irish independence in the 10th century. 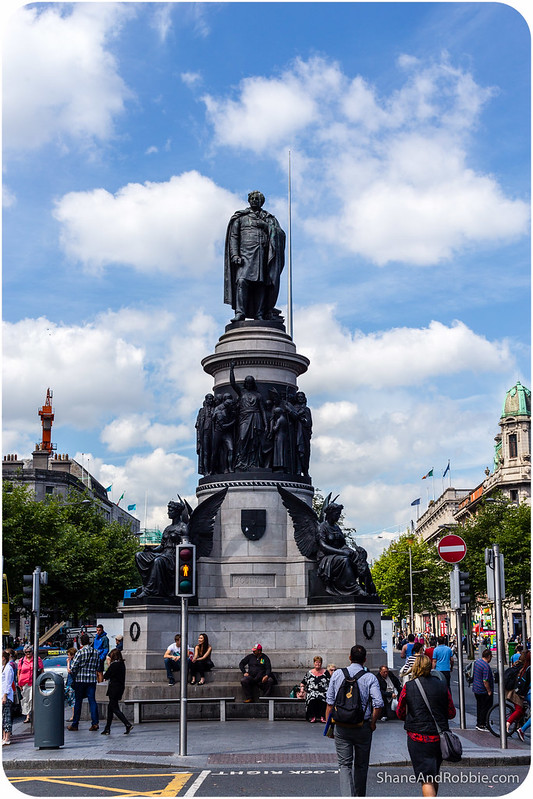 Not far from the statue of Daniel O’Connell we also found one of Dublin’s newest monuments: The Spire. This 121m high steel needle is a relatively new addition to the Dublin skyline, and rather an odd one in many ways. Still, it makes finding our way home easy enough – we just look for the giant spire. 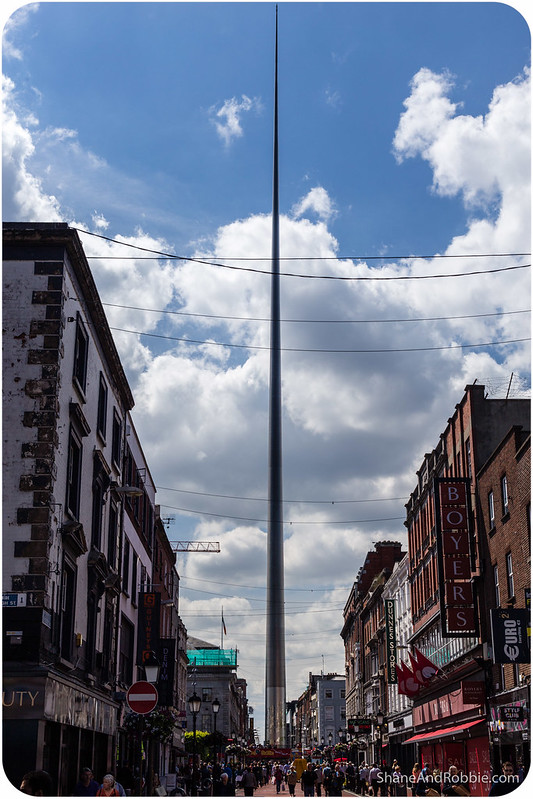 Crossing the river we found ourselves in Temple Bar, Dublin’s bohemian district. The area is named after the most famous bar in town (i.e. the Temple Bar), which is itself named after the street it’s on (i.e. Temple Street), which was named after Sir William Temple, one of 17th century Dublin’s most notable citizens. Famed today for its nightlife, boutique theatres, art galleries, and photographic studios, Temple Bar is pretty funky, though a little touristy for our taste. 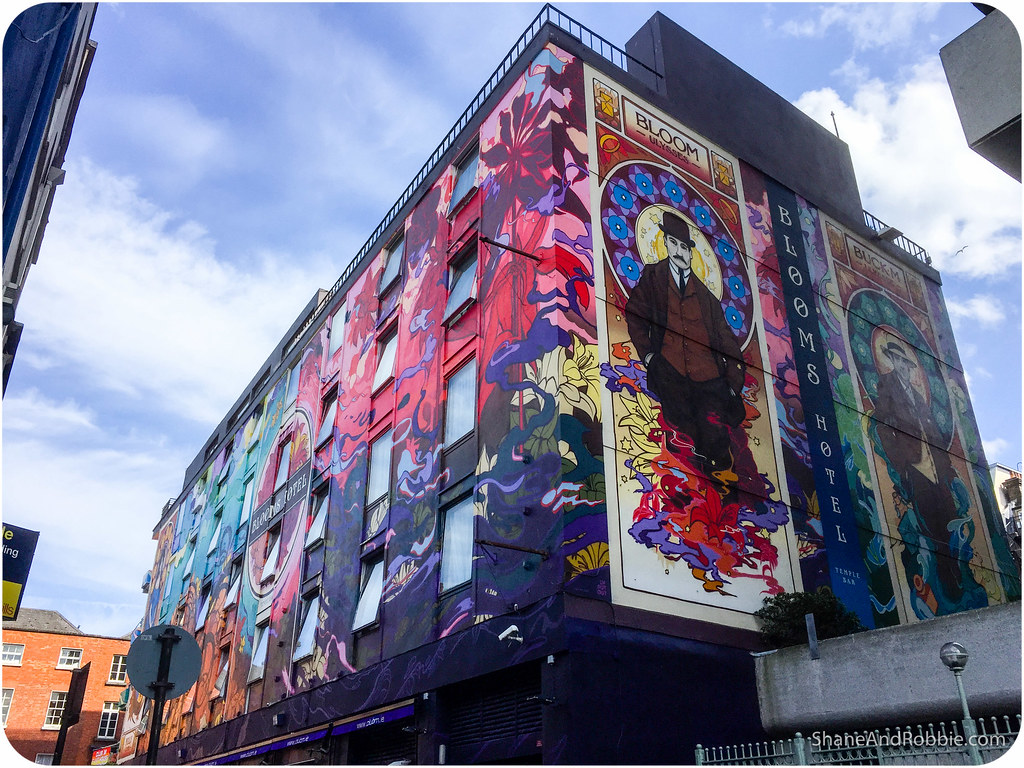 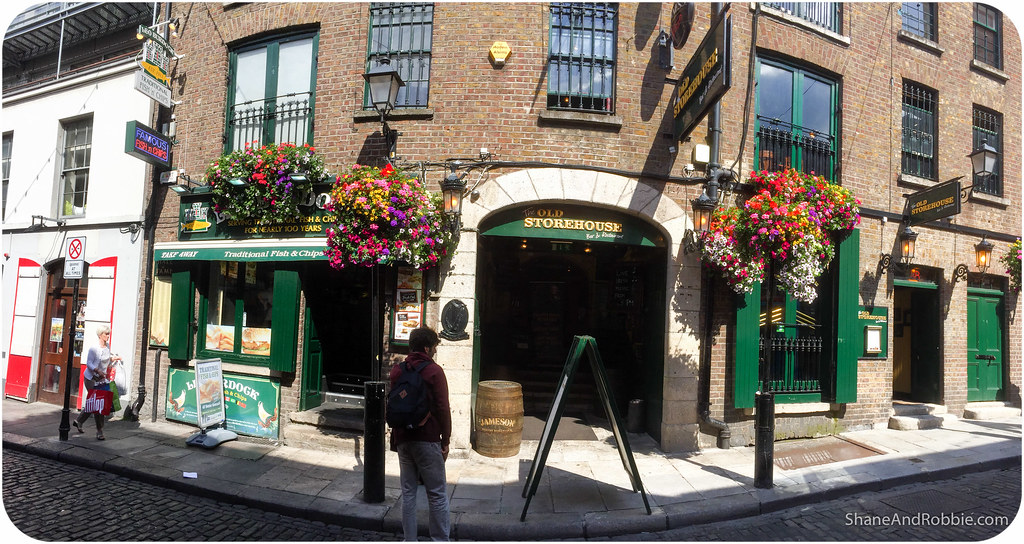 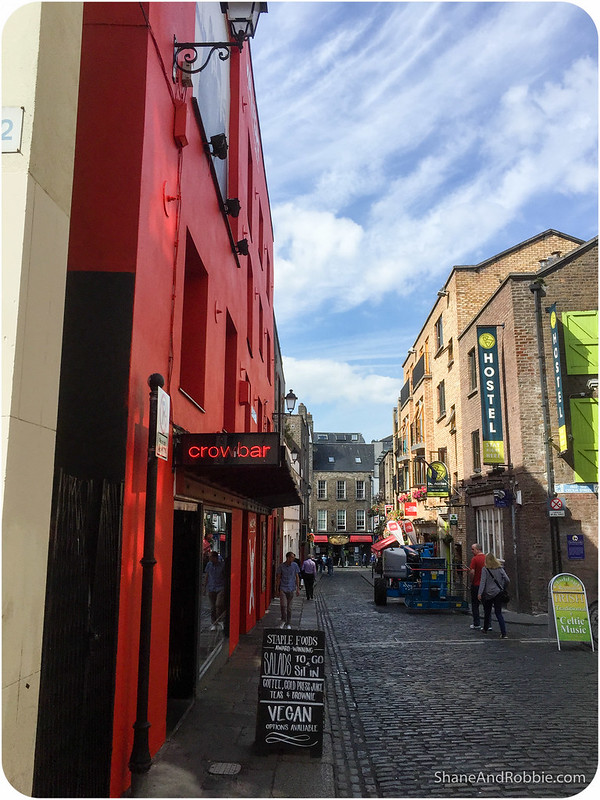 Interestingly enough, during the 18th century Temple Bar fell from grace and became a centre for gambling, prostitution, and the like. By the 20th century it had become a derelict, decaying district, with little appeal. Government grants and some concerted efforts on the part of some proud Dubliners ensured that Temple Bar underwent a major reinvention during the 1990s, however. And to make the success story even better, today Temple Bar is one of the city’s biggest tourist attractions.

Continuing our wandering we ended up on Grafton Street, one of Dublin’s main shopping streets. Lined with elegant buildings, this street was thrumming with people. 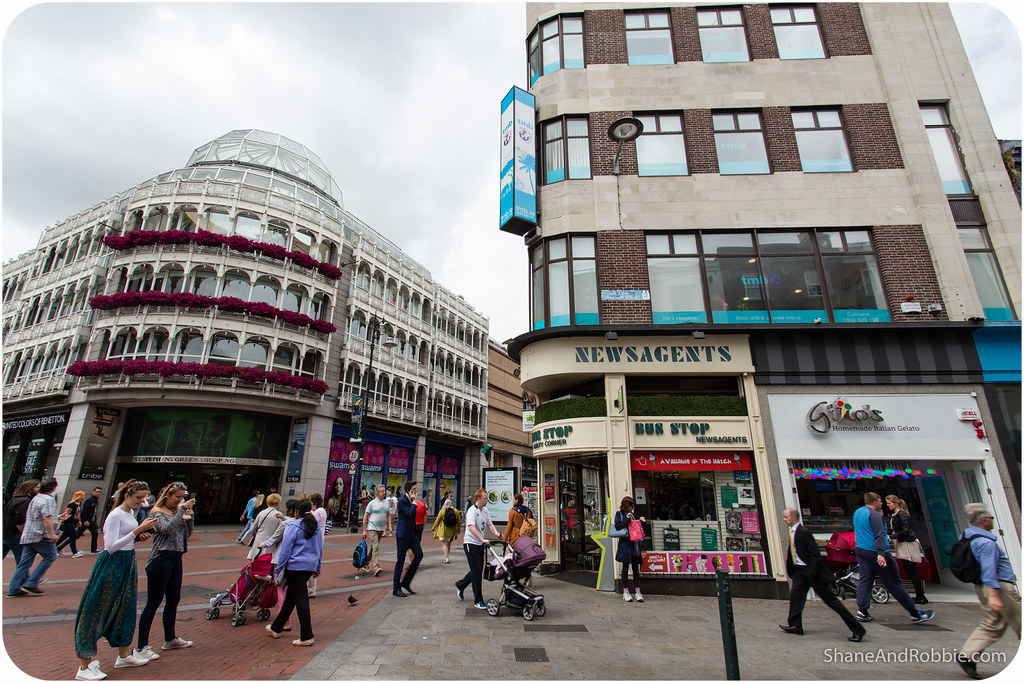 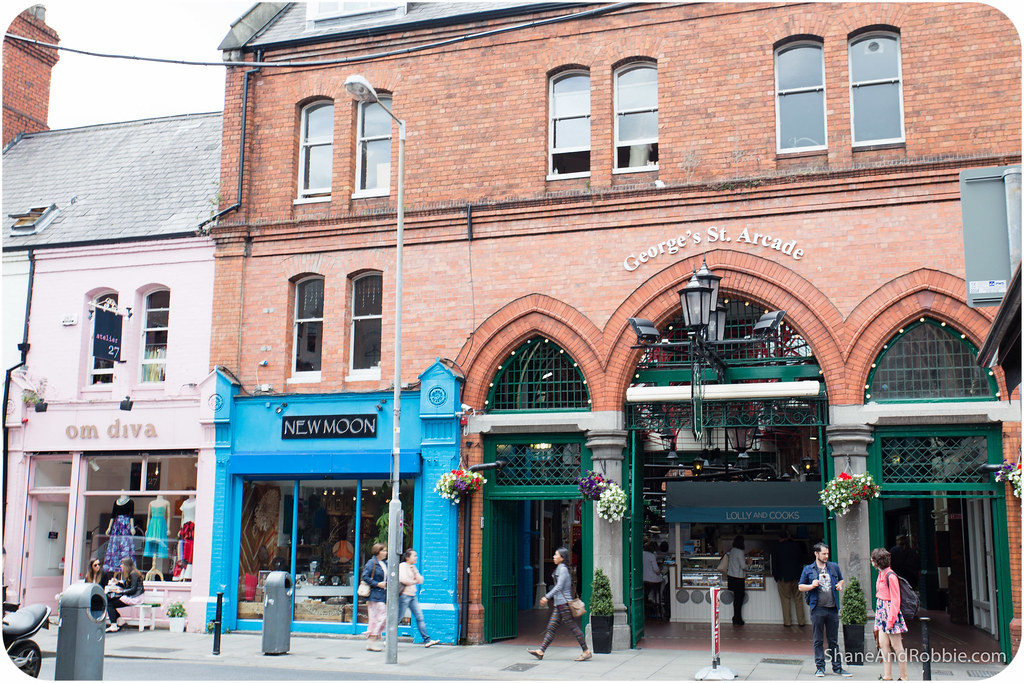 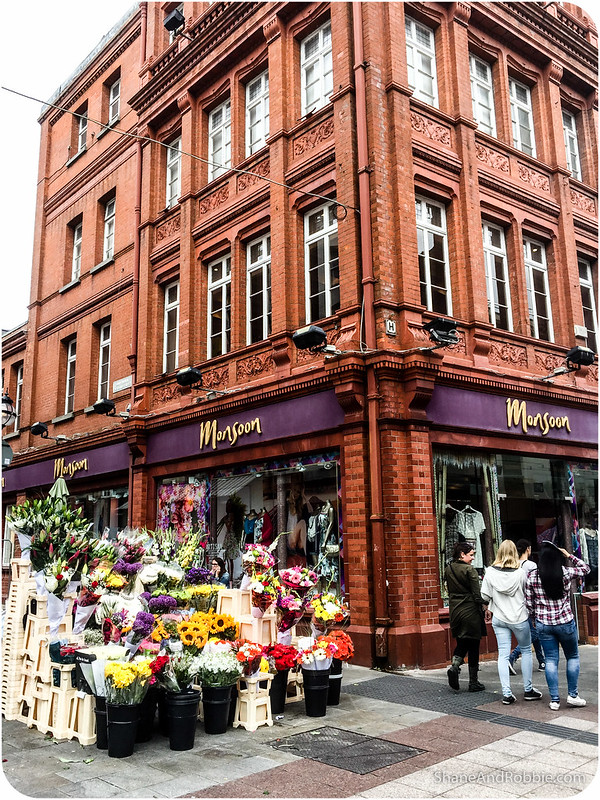 We spent a lot of afternoon strolling down Grafton Street, window shopping and just getting used to being around so many people again. Eventually the mall ended and we found ourselves following the steady stream of people across the road and into St Stephen’s Park. 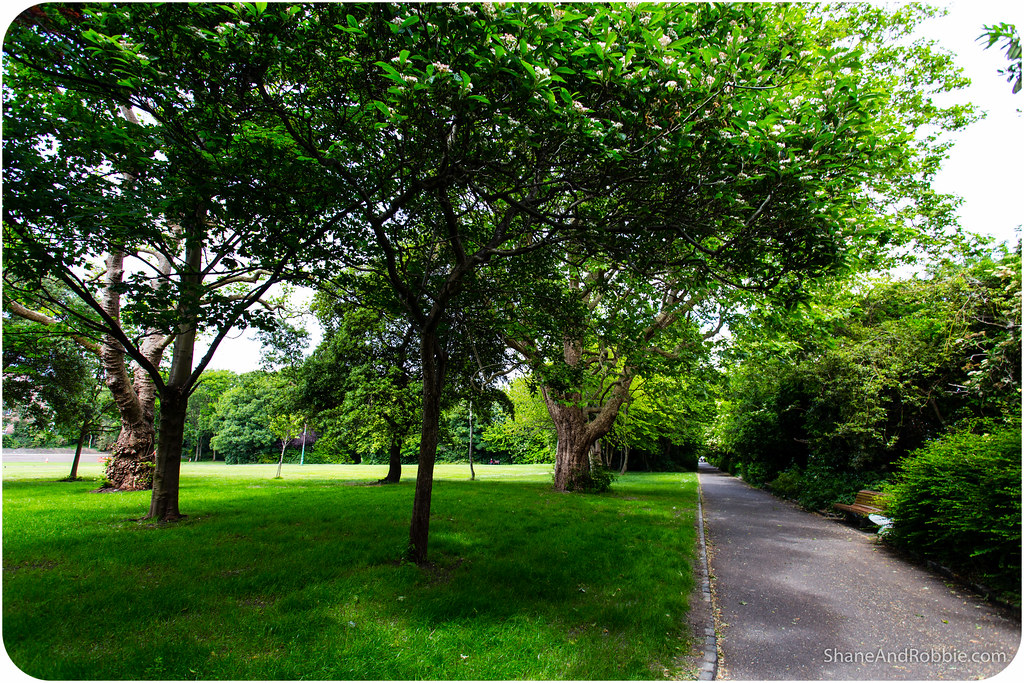 Dublin has more green spaces per square kilometre than any other European capital city, and St Stephen’s Green is one of these. This 22 acre park has been a focal point of Dublin life since the late 1800s thanks to the good work (and good moneys) of brewery baron Arthur Guinness. Given the beautiful weather we joined the locals and spent the rest of afternoon enjoying this lovely urban oasis of tree-lined pathways, meadows, flowers, and ponds. 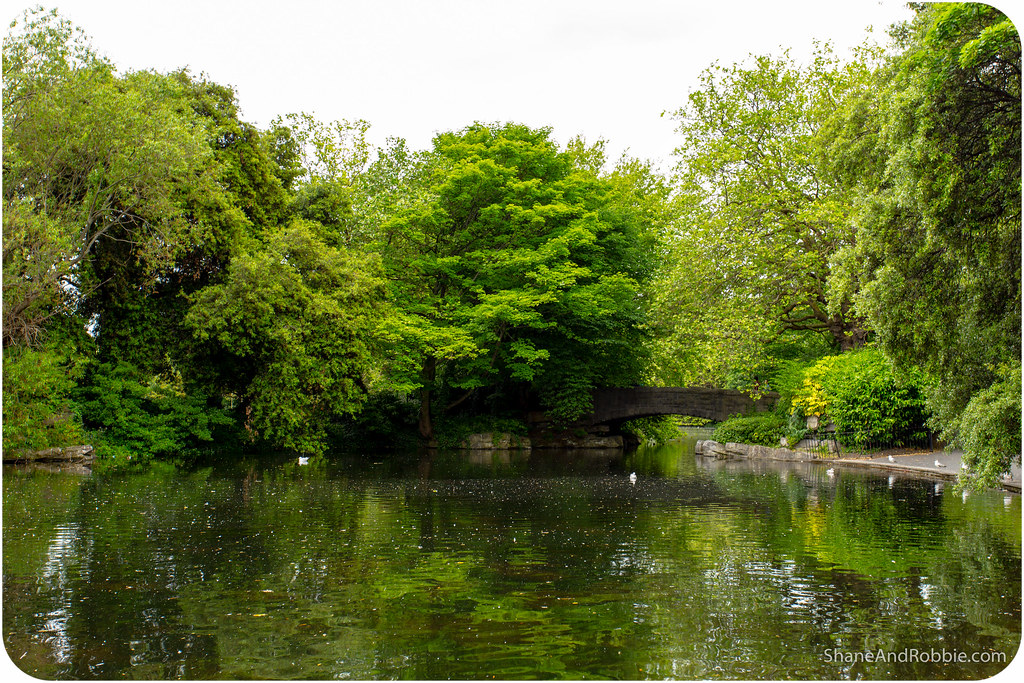 A good start to our time in Dublin. We didn’t do too much sightseeing, but given the sunshine, it seemed a waste to send the afternoon indoors! Besides, we’re on holiday – what’s the rush?! 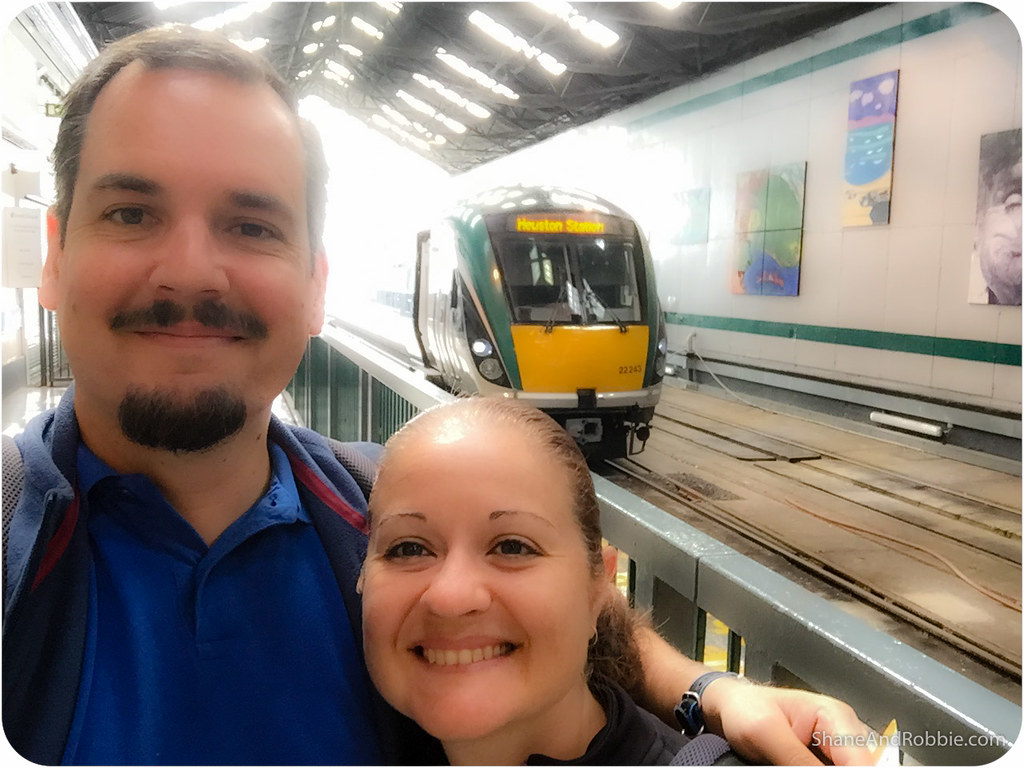