SCRAMBLING UP (& DOWN) SNOWDON

Today we climbed Mt Snowdon – all 1,085m of it. Then we had to get back down the mountain – all 1,085m of it. It was one of the most epic, beautiful days we have ever had. It was also by far one of the hardest days we have ever had. Don’t be fooled by the fact that it’s a mere kilometre up, scrambling up (and down) Mt Snowdon is not an easy undertaking. The mountain’s slopes are covered in scree, steep stone steps, and jagged rocky outcroppings. This makes for some tricky footing and an intense day of hiking. The views, however, are spectacular; and as exhausted as we are, it was worth every step! 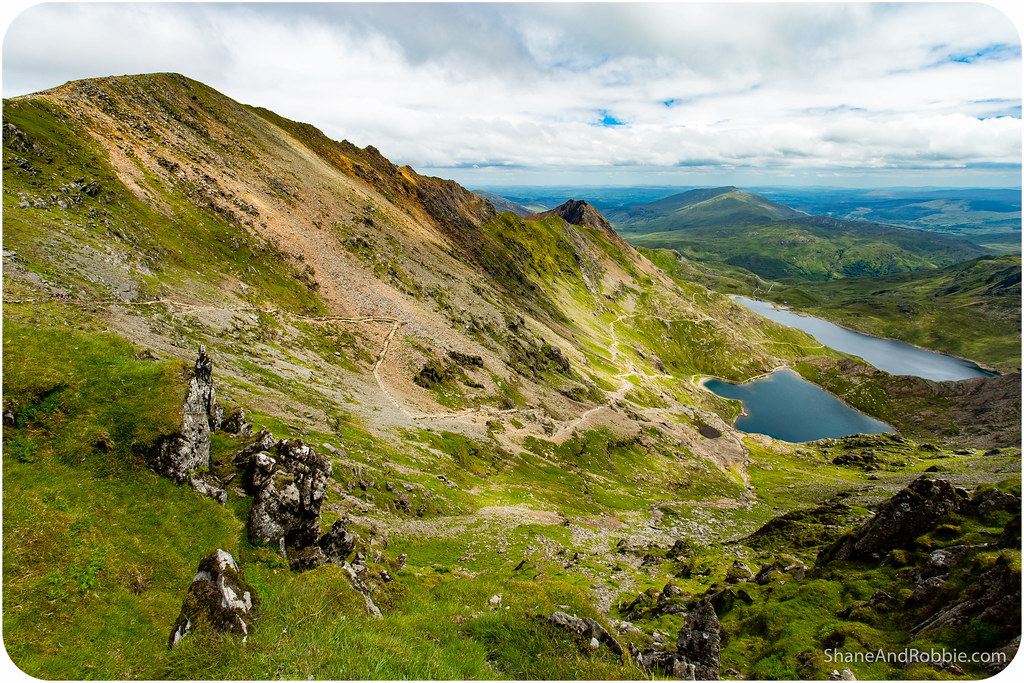 The highest peak in Wales, Mt Snowdon has a number of ridges that lead up to its peak. There are about half a dozen trails that lead to the top of the mountain, most of them following one of these ridges at least part of the way. We did a lot of reading and research* before choosing the trails we wanted to walk and (based on our skill level, lack of local knowledge and my intense dislike of heights and precipices), decided to climb up the Llanberis Trail and down via the Miner’s Track.
*Mt Snowdon has been described as “the busiest mountain in Britain”, with thousands of people coming to hike the mountain every year. There are some seriously precipitous parts to the mountain, however, and many inexperienced walkers have been killed trying to scale its heights without proper preparation or due caution. They even had the helicopter out today whilst we were hiking, searching for someone that got lost and went down the wrong side of the mountain! The last thing we wanted to do was to over-estimate our abilities and end up as smears on the landscape, so we erred on the side of caution and chose 2 easy routes for our trek today.

At 8km the Llanberis Trail is the longest route to the summit, but it has the shallowest gradient and is thus the easiest of all the trails. We chose this route to start with just to get a feel for how tough Mt Snowdon really is – i.e. if even the “easiest” route proved to be too much for us, we wouldn’t have even attempted any of the others! 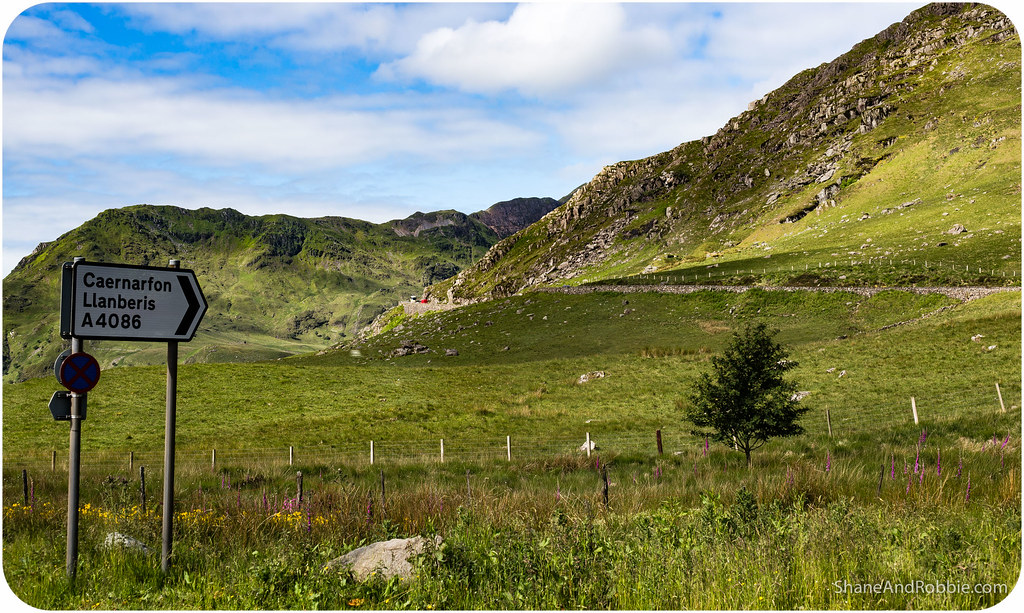 Turns out the Llanberis Trail is fine – even for cream puffs* like us. The path was easy to follow, well maintained, and a pretty easy climb. The first bit, getting from the village of Llanberis to the trail head, was actually the steepest bit! Once we got on to the trail proper though, it was fine.
*A “cream puff”, by our definition, is a rather soft urbanite whose natural habitat is more likely to be the 5-star resort, rather than a mountain-top! 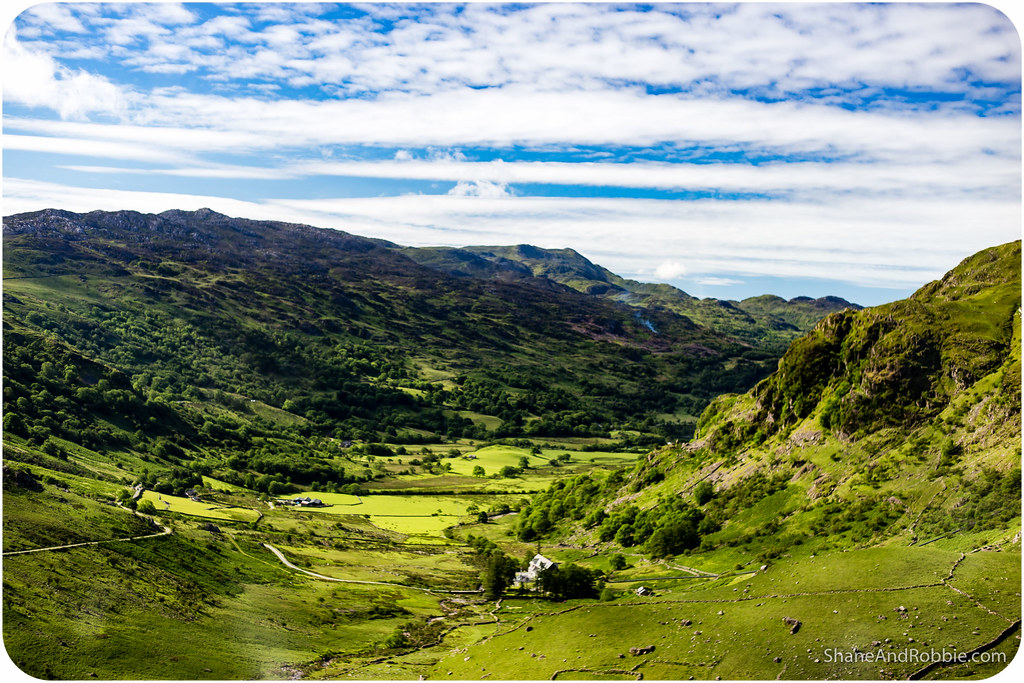 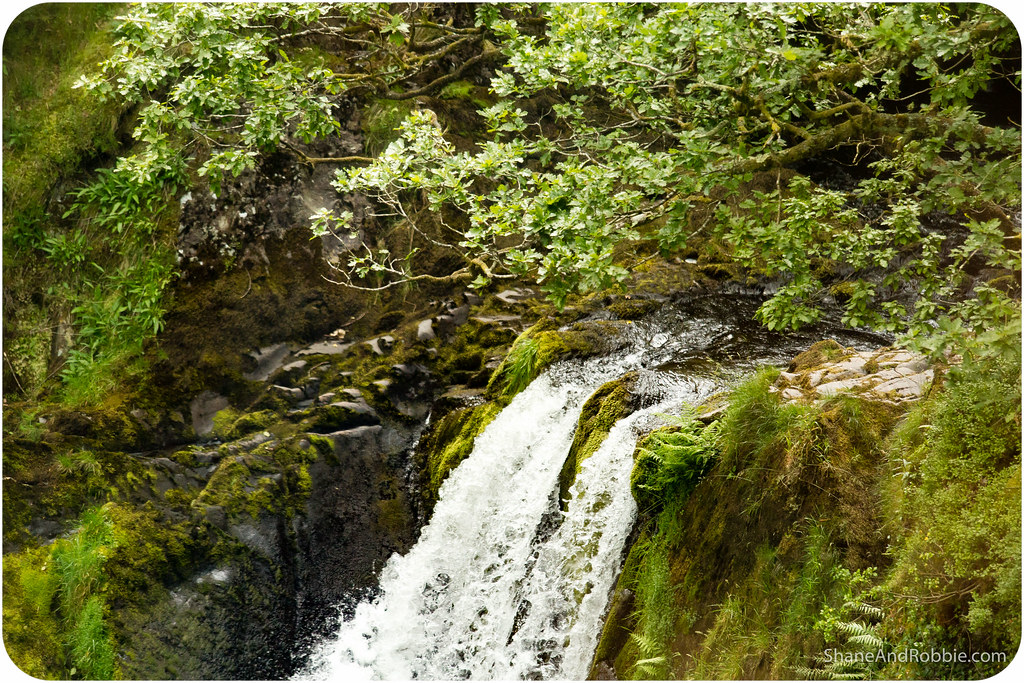 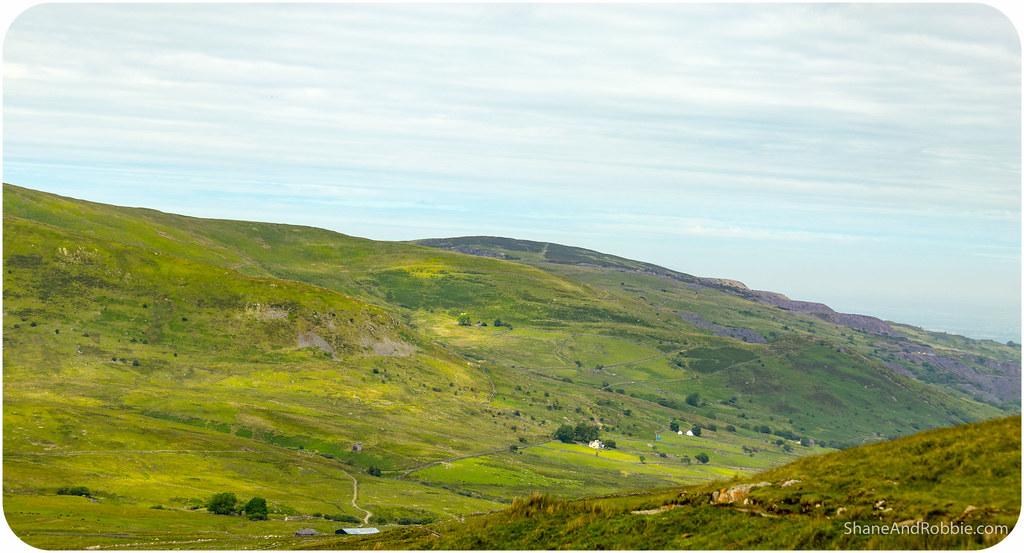 We had a bit of a huff on the last bit, up to the peak too, but once we were up there, the views across the valleys of Snowdonia National Park made it all worth it. 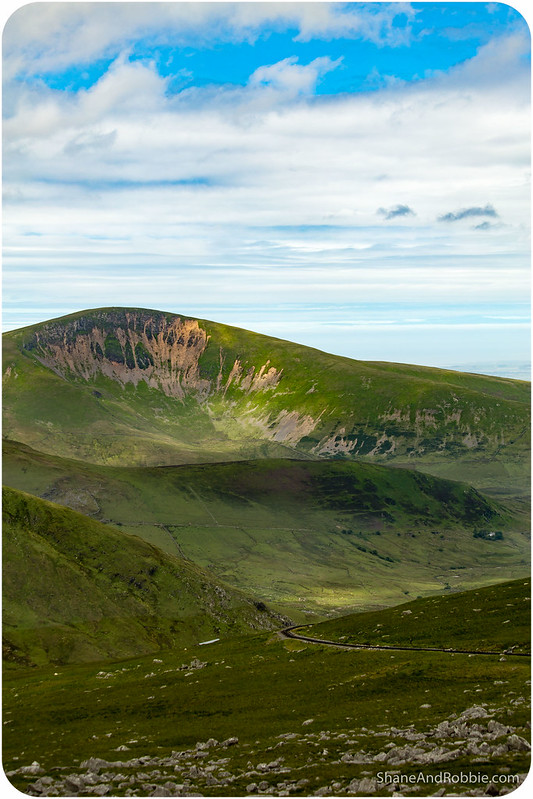 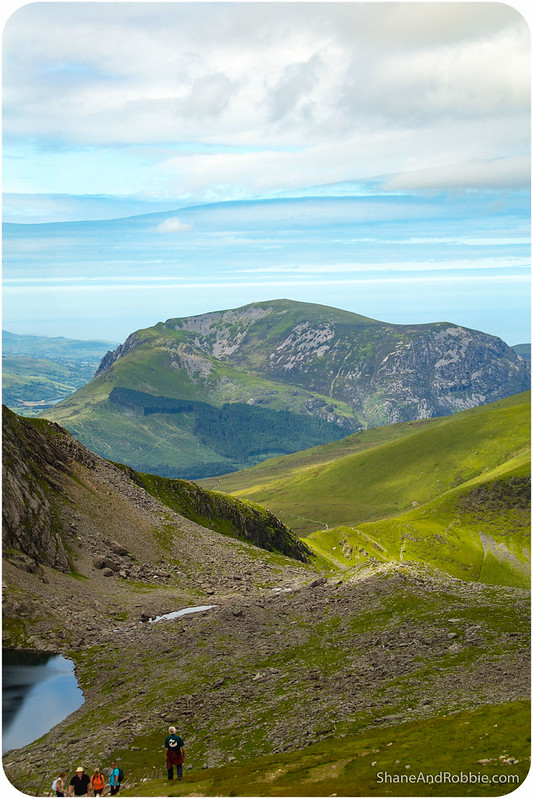 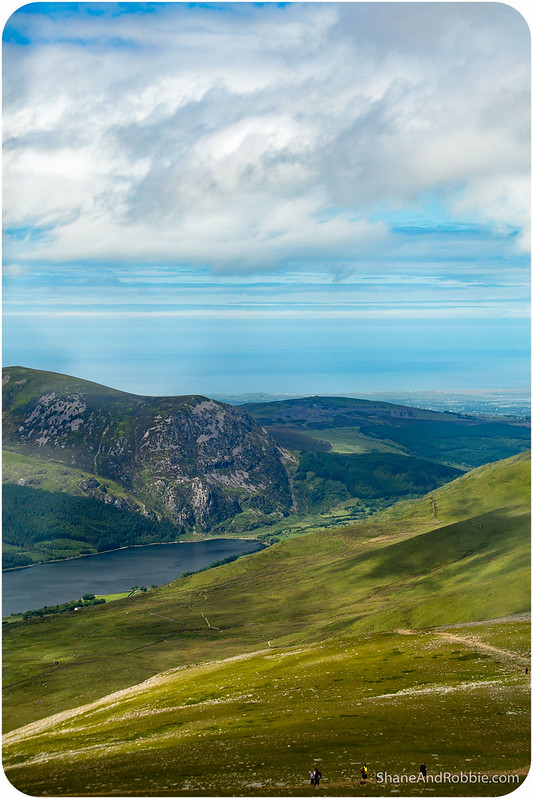 The Llanberis Trail follows the line of the Snowdon Mountain Railway, which is one of the national park’s biggest attractions. This narrow gauge, rack-and-pinion railway was opened in 1894 and exists purely for taking tourists up and down Mt Snowdon. It’s ridiculously expensive, but every time the tiny train came chugging up the mountain, it was packed! Seems the Snowdon Mountain Railway is as popular today as it was 100 years ago! 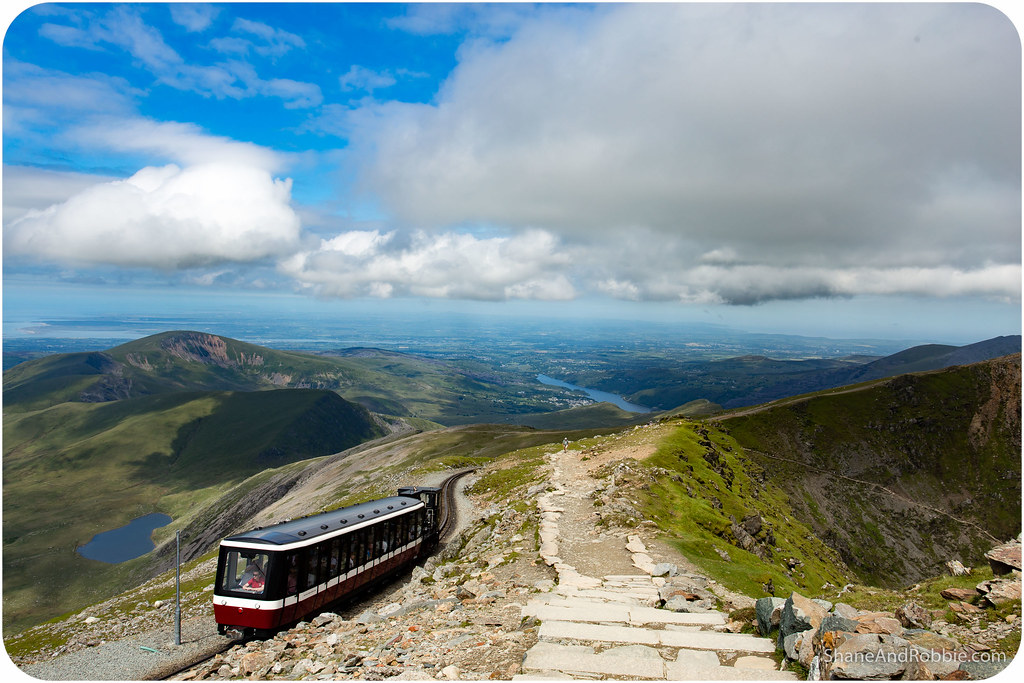 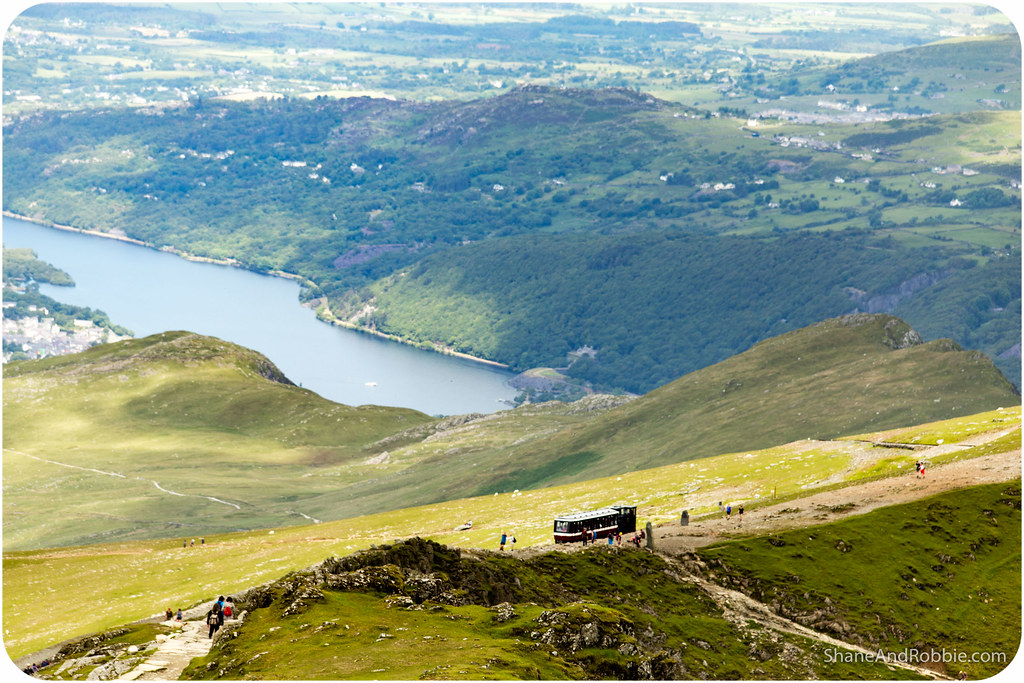 It’s often foggy, misty and wet up at the peak; and given that the name Snowdon means “snow hill” in Old English, it’s common to get a bit of a white dusting up there, even in June! Luckily for us, though, the weather was on our side and the hike was made far more pleasant by the lack of rain, sleet, or snow. We had been warned to take wet weather gear and be prepared for all sorts of possibilities as far as the climatic conditions went. Great Britain is in the grips of heat wave at the moment, however, so we enjoyed 25 degrees and blue skies. 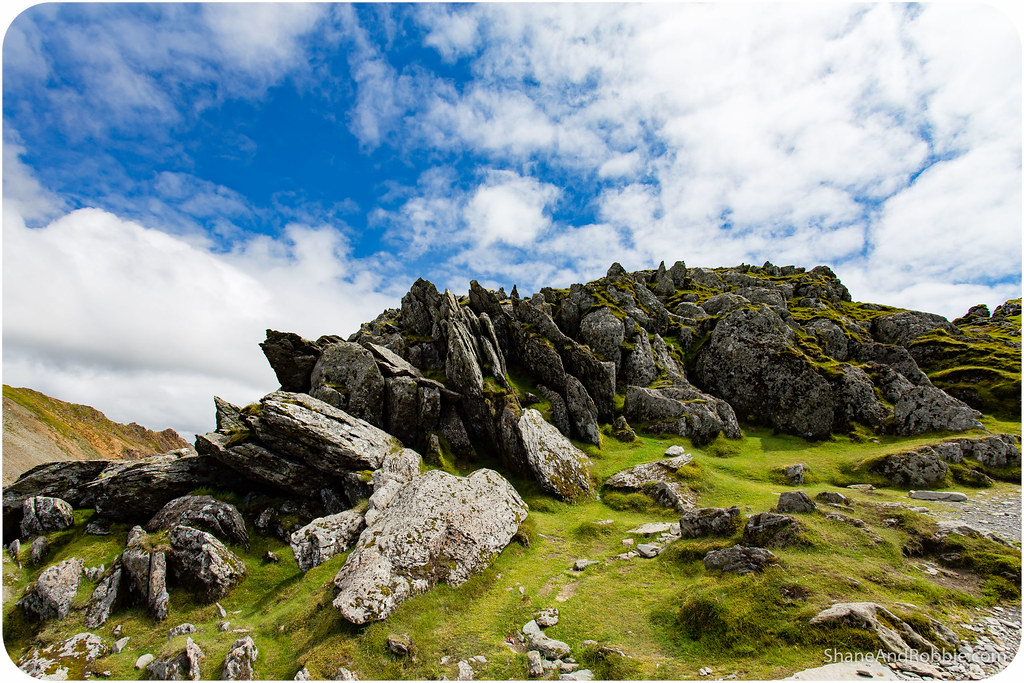 The visibility was so good, in fact, that we could see all the way to the coast! On exceptionally clear days, Ireland, Scotland, and the Isle of Man are all visible, apparently. We couldn’t quite see THAT far, but near enough. Totally awesome! 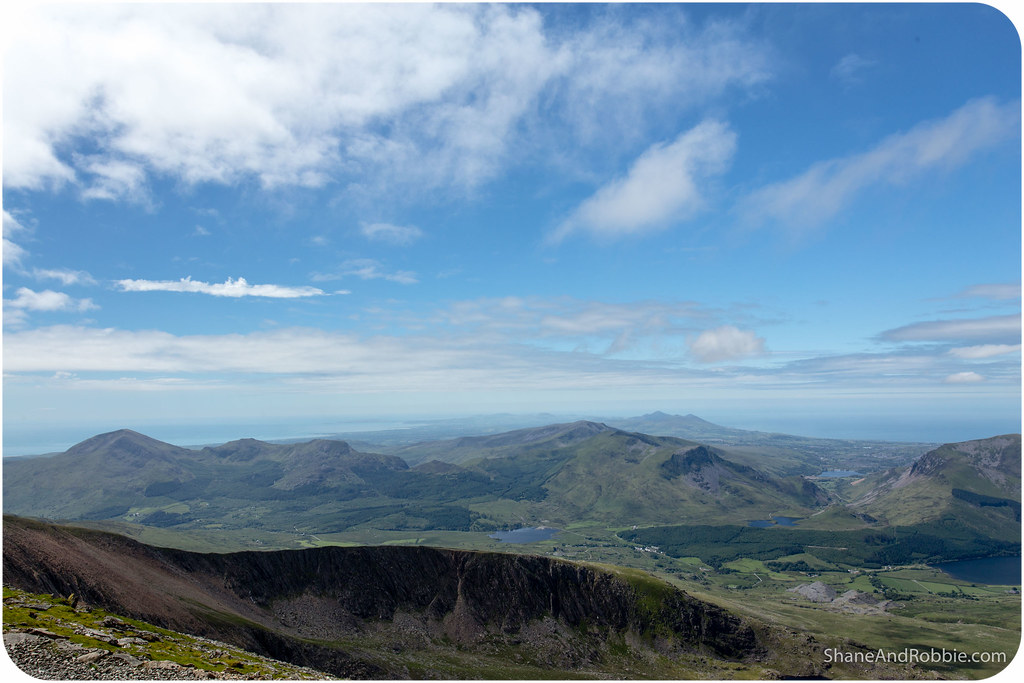 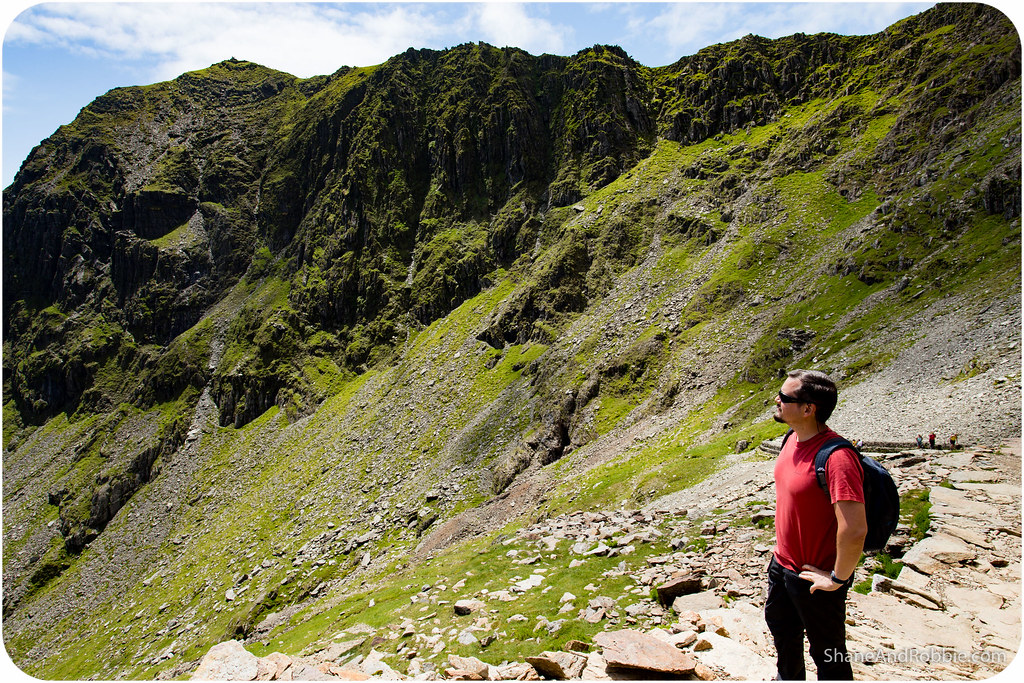 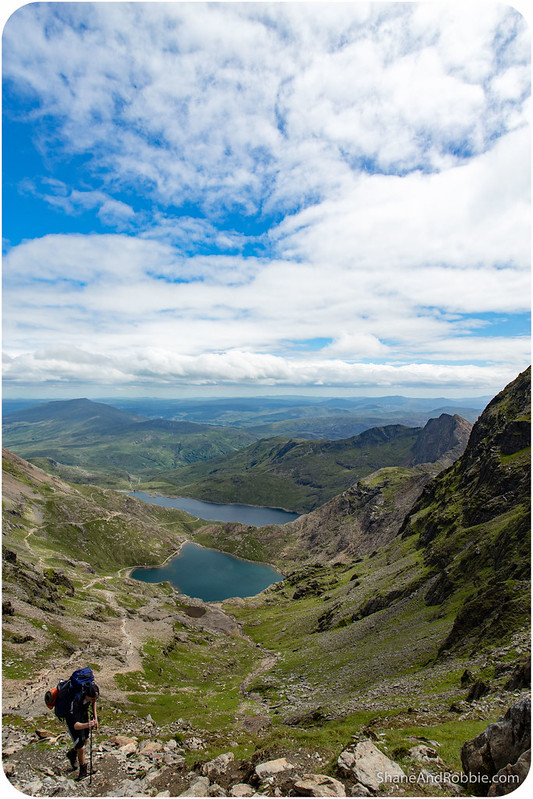 It took us about 2.5 hours to get up to the top of Mt Snowdon via the Llanberis Trail, and we spent about an hour up there enjoying the views and refuelling at the café up there. 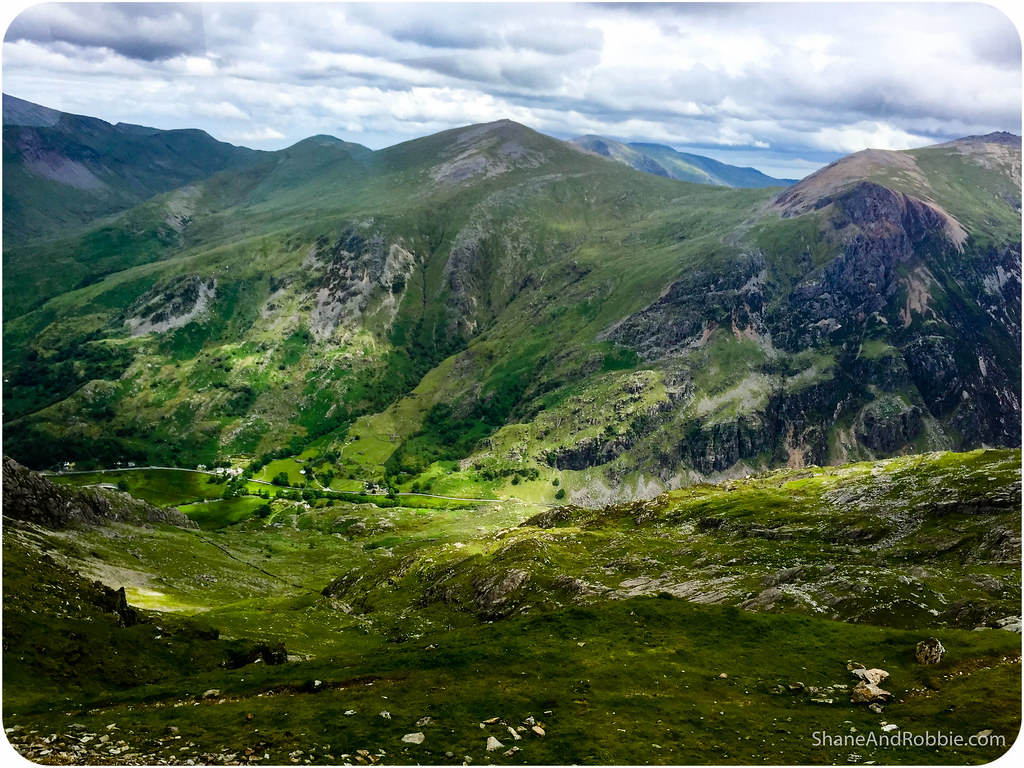 When the time came to start heading back down we felt confident enough to tackle a different route down, and enjoy some different views. We chose the Miners’ Track as it’s only rated “Moderate” in terms of difficulty, and runs down the eastern edge of Snowdon (the Llanberis Trail runs roughly down the northern mountain ridge), past some beautiful lakes. 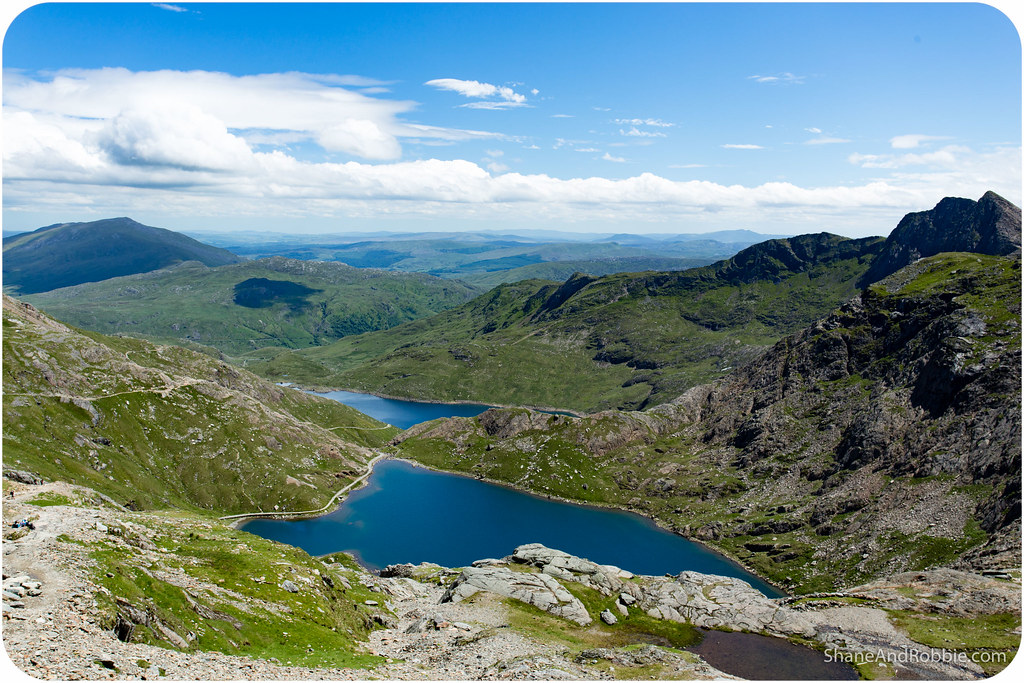 We knew we were in for a bit of a challenge as soon as we started on the Miner’s Track: the first section of this 7km trail is quite steep and involved A LOT of scrambling over rocks and stepping carefully through loose scree. Not fun when your legs are already a little tired, and you’re just a little (or a lot) afeared of heights and the only thing between you and what feels like imminent death is… well, NOTHING! Shane was fine (being part mountain goat), but I was soon wondering if I had made a terrible decision trying to come down this way… 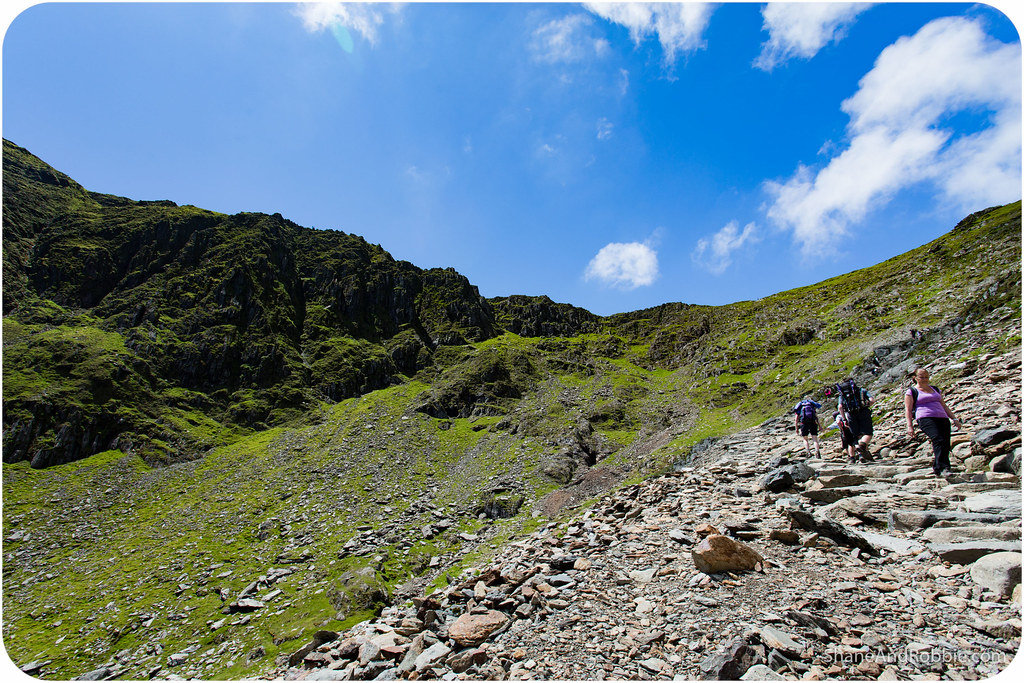 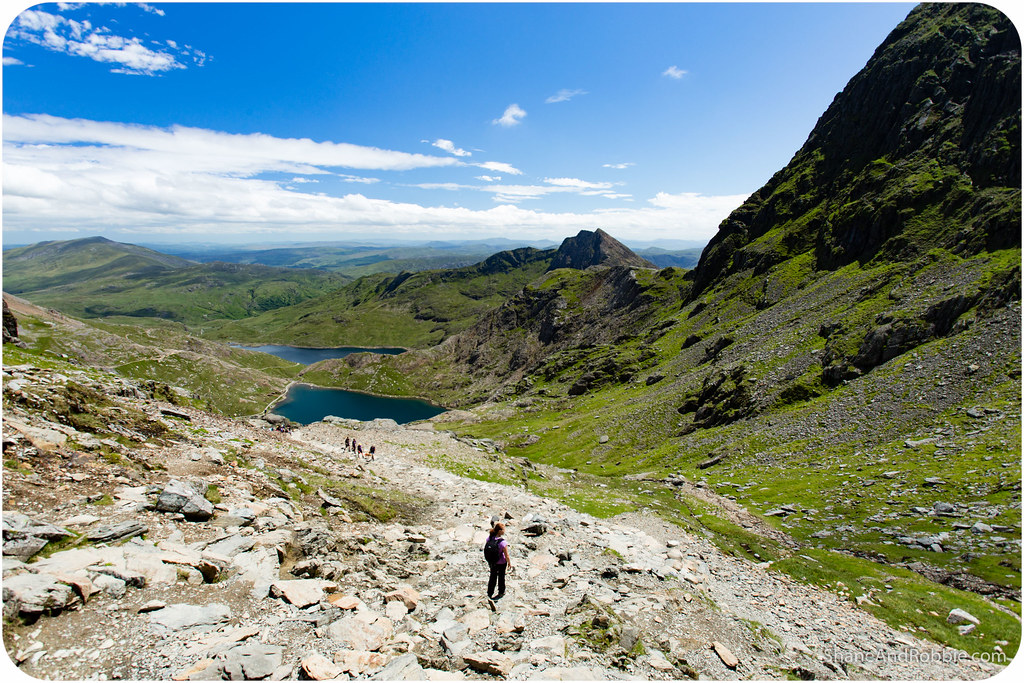 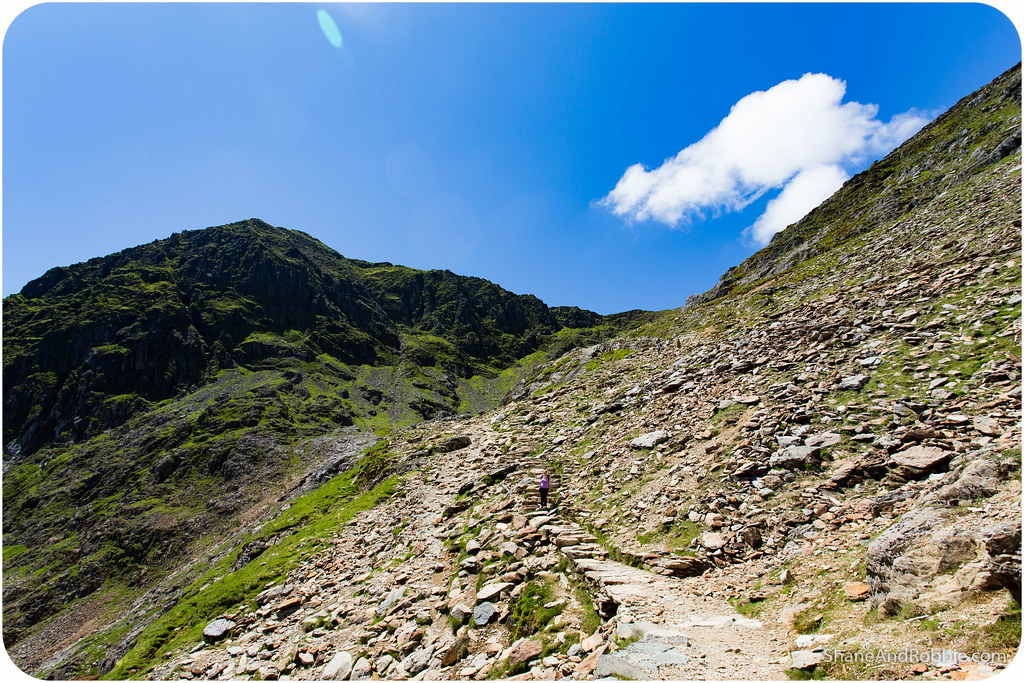 Going slowly and taking lots of care, we both made it down the first part of the Miner’s Track without any injuries or incidents. From there the trail flattened out and was much easier to navigate. 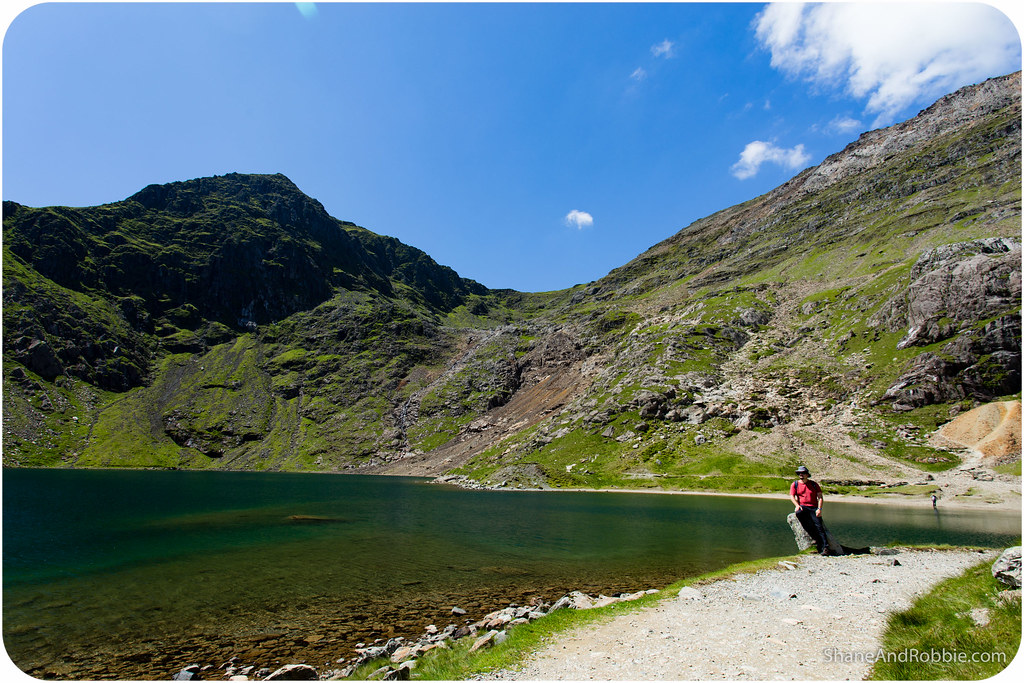 The valley we walked through for the last part of the Miner’s Track was formed by a glacier many eons ago and contains a number of deep lakes. We skirted around a couple of these alpine lakes, giving us some of the most amazing views of the day. It was incredible seeing Mt Snowdon and the other peaks reflected in the waters of Llyn Llydaw and Llyn Teyrn. 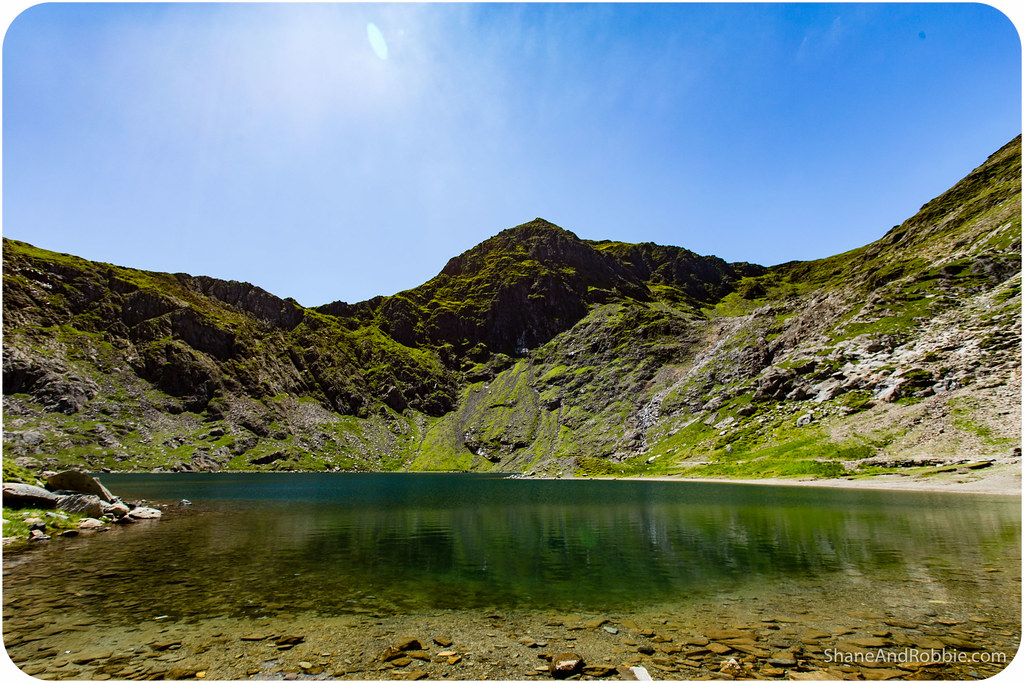 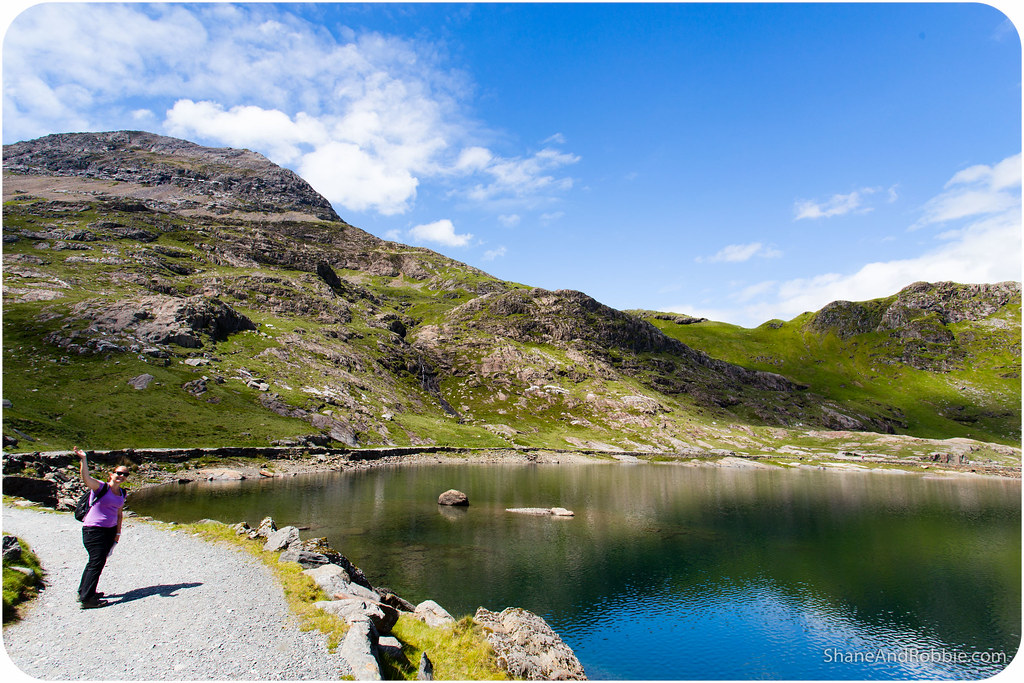 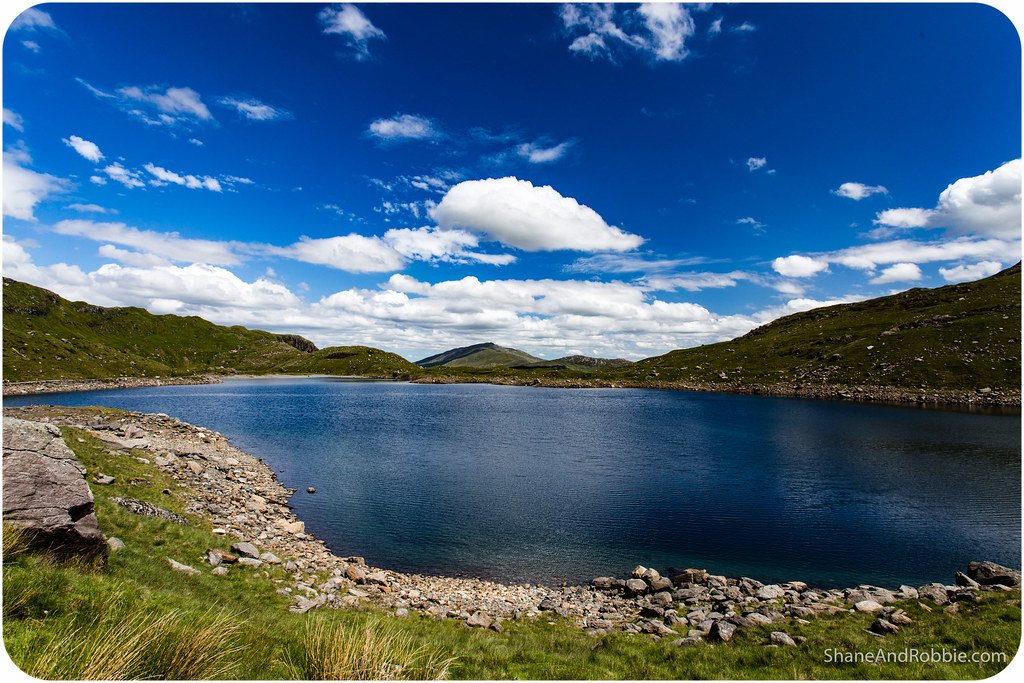 Leaving the lakes behind we rounded a final corner and made our descent into the hamlet of Pen-y-Pass to await the bus* back to Betws-y-Coed. All in all it took us 6 hours (including the hour’s rest at the top) to scale the mountain and get back down – not bad for a couple of cream puffs!
*They have a great system of buses through Snowdonia National Park that criss-crosses the region. This means you can start your hike in one village and end in another, like we did today. 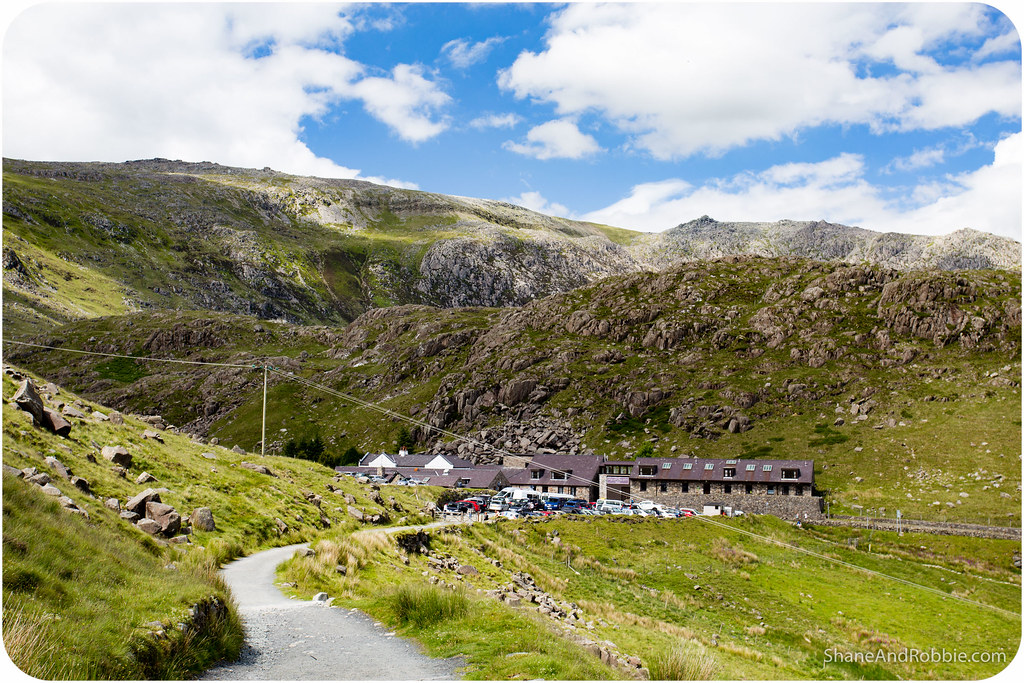 A short bus ride later we were back here in our favourite little village, ready for a hearty meal and a hot shower. And now we’re bathed and refuelled after our epic 15km hike/scramble, and just about ready for bed. Scaling a mountain sure does take it out of you, but man was it worth it! 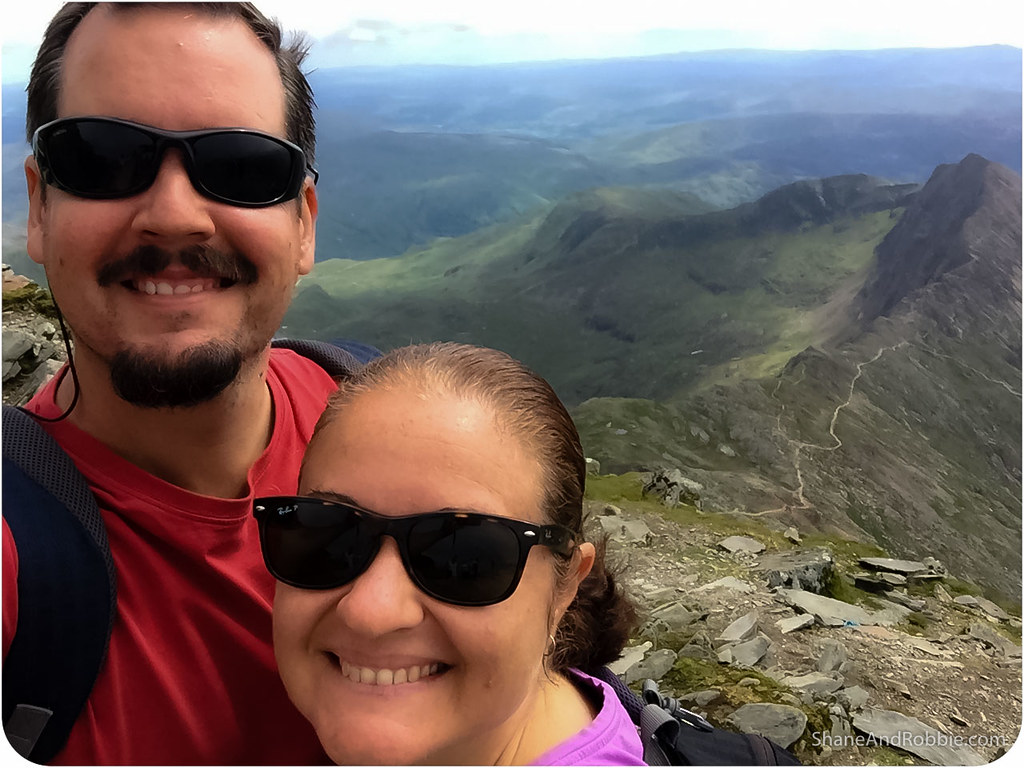