GLASGOW: OUR GATEWAY TO SCOTLAND

Having had more than enough sunshine for now we left England and headed north today, across the border into Scotland. We’re here in Alba, as it’s known in Scottish Gaelic, for the next couple of weeks. While here we’re hoping to see some of the glorious vistas this country is famous for; enjoy the delectable local cuisine; and experience the best of Scottish hospitality. 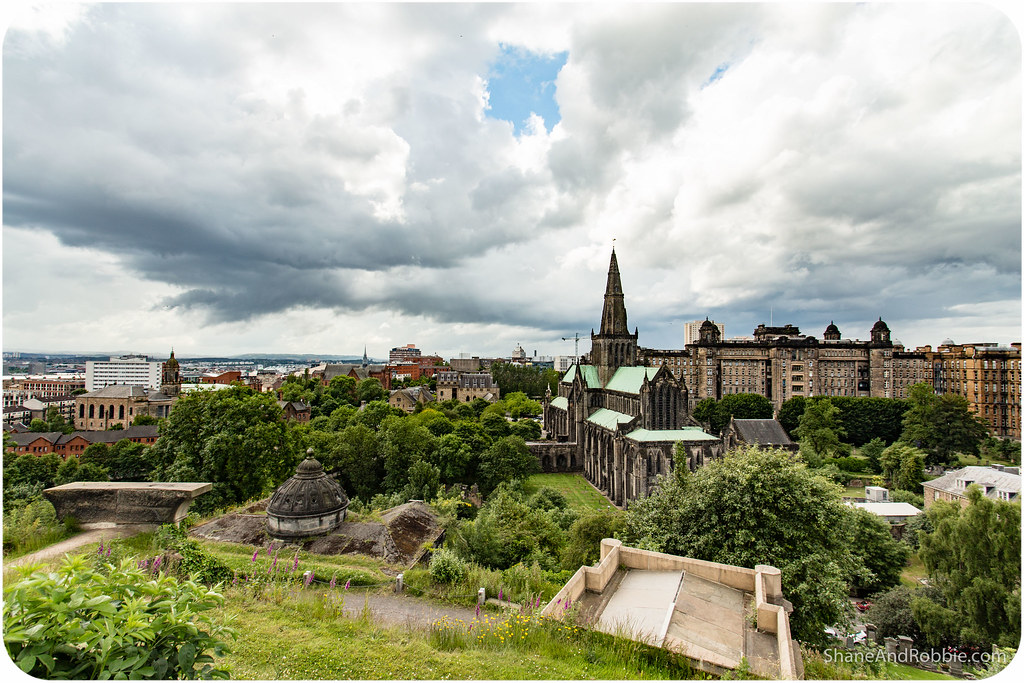 No sooner had we crossed the border, it seemed, than the clouds closed in and the accents got thick and incomprehensible*. Welcome to Scotland indeed!

*There are jokes aplenty about Scottish accents and how hard they can be to understand, but thick Glaswegian accents really are impossible to decipher! When our train pulled into Carlisle, the last large town in northern England before the border with Scotland, a whole bunch of very large, very pale, and very loud Scottish lads got on. They spent the next 90 minutes joking (very loudly) amongst themselves in what we believe was English. It was very hard to tell exactly what language they were speaking, but every third or fourth word seemed to be English. Luckily not everyone in Glasgow speaks with such a thick accent, but it still takes a fair bit of concentration on our part to work out exactly what’s being said to us at times! 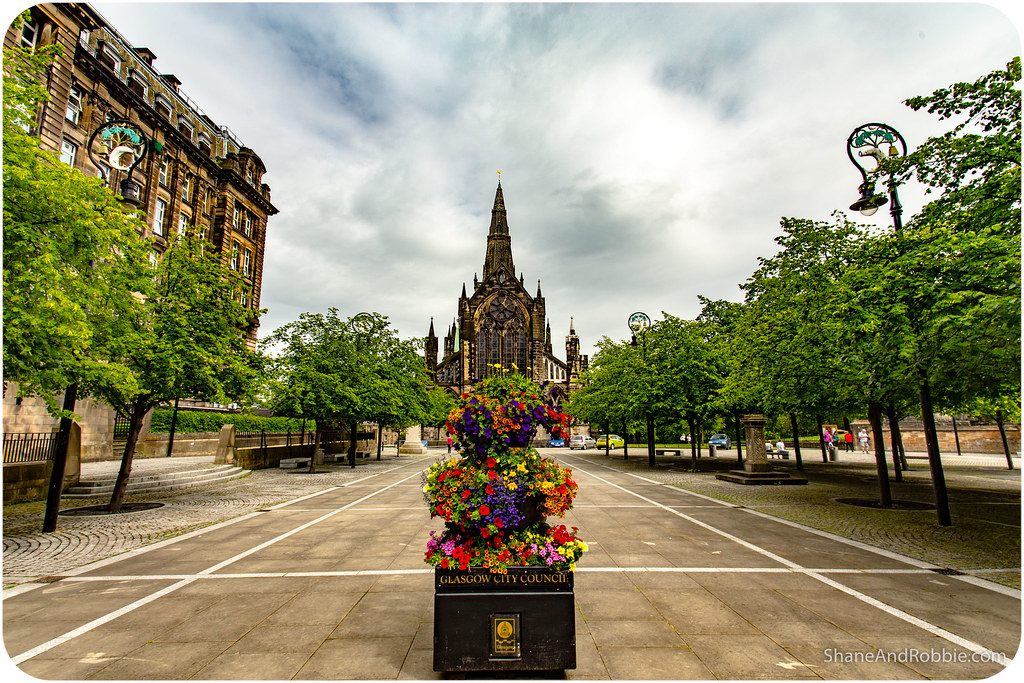 Our first stop on this Caledonian* tour was Glasgow, Scotland’s largest city. Edinburgh may be this country’s capital but Glasgow is its largest city. Home to 1.25 million people, Glasgow is home to a quarter of Scotland’s population and was once one of the world’s leading industrial cities. Ship-building, coal mining, tobacco and steel works made this one of the United Kingdom’s most prosperous cities in the 18th and 19th centuries. By the mid-20th century, however, Glasgow had gone into economic decline as new industrial super-powers (e.g. Japan) emerged. Unemployment and urban decay led Glasgow to develop an exceedingly unsavoury reputation during the 1970s and 1980s. The last 25 years, however, have seen improvements through urban renewal programs and economic growth due to service-based industries. The result is a city that still seems to have a pretty gritty edge to it, but without the same level of violence and crime it was once infamous for.

*Caledonia was the what the Romans called these barbaric lands, north of their colony of Britannia. 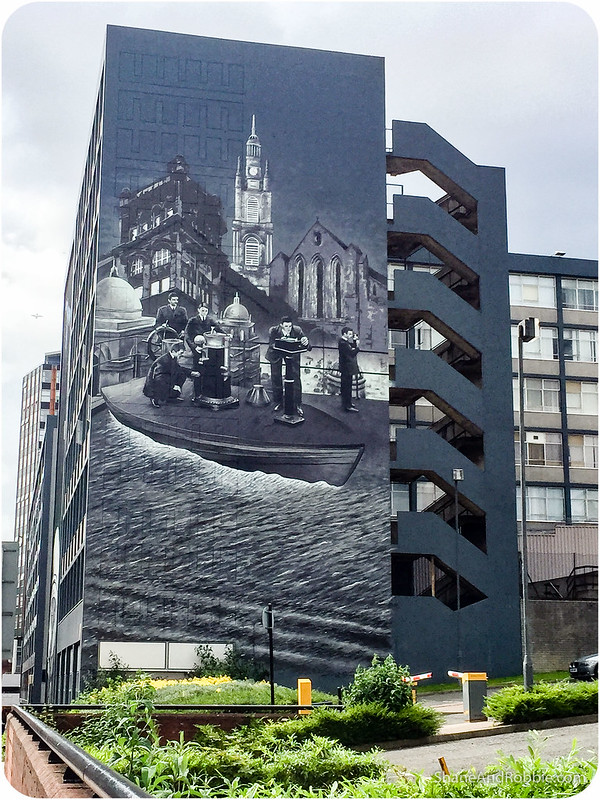 Exploring the city this afternoon we didn’t feel unsafe, though there did seem to be a lot of groups of young men dressed in tracksuits hanging around. Talking to some locals we’ve since learned that these youths are colloquially referred to as “neds” and are best avoided. Makes sense really, anyone wearing a velour tracksuit* in public is generally best avoided in my opinion.

*We’re not exactly in a position to judge fashions, given that we only own 3 outfits apiece, but on what planet are tracksuits fashionable?! We haven’t seen velour tracksuits since we were in Russia a couple of years ago – they weren’t cool then and they most certainly are not cool now! 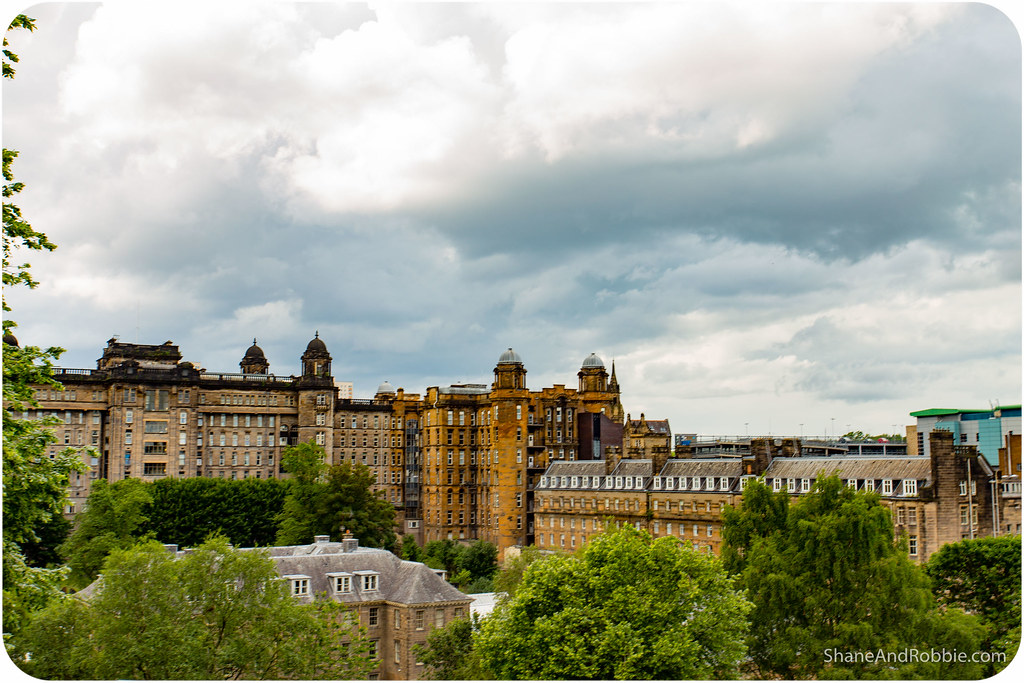 We noticed, walking around town this afternoon, that the vast majority of Glasgow’s architecture dates from the city’s industrial hey-days of the 19th century. It makes for an attractive cityscape, especially in the city centre. 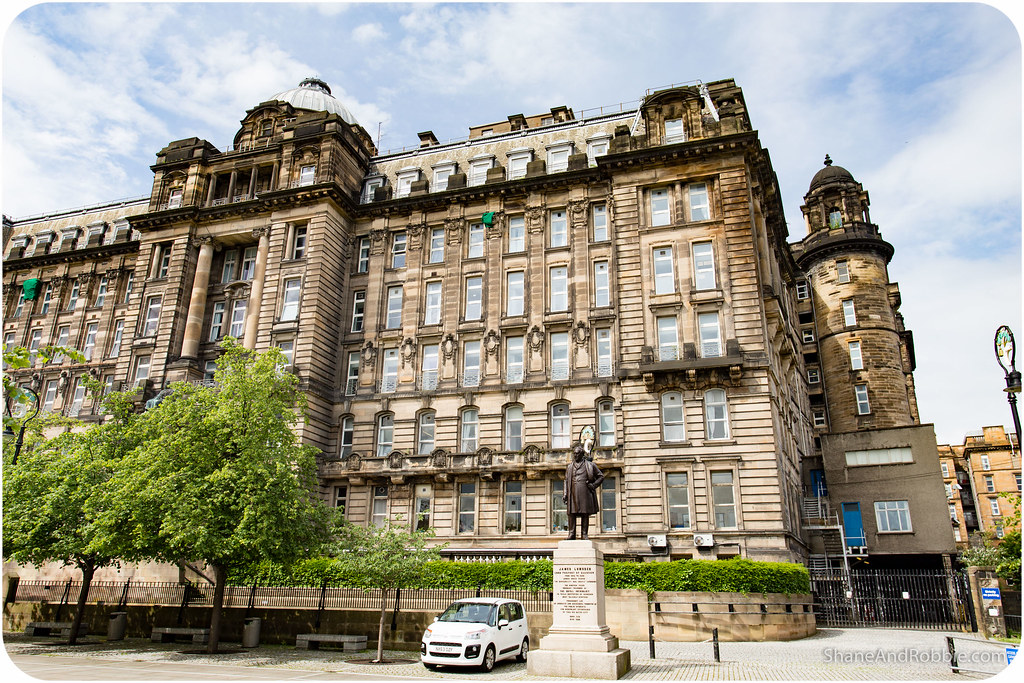 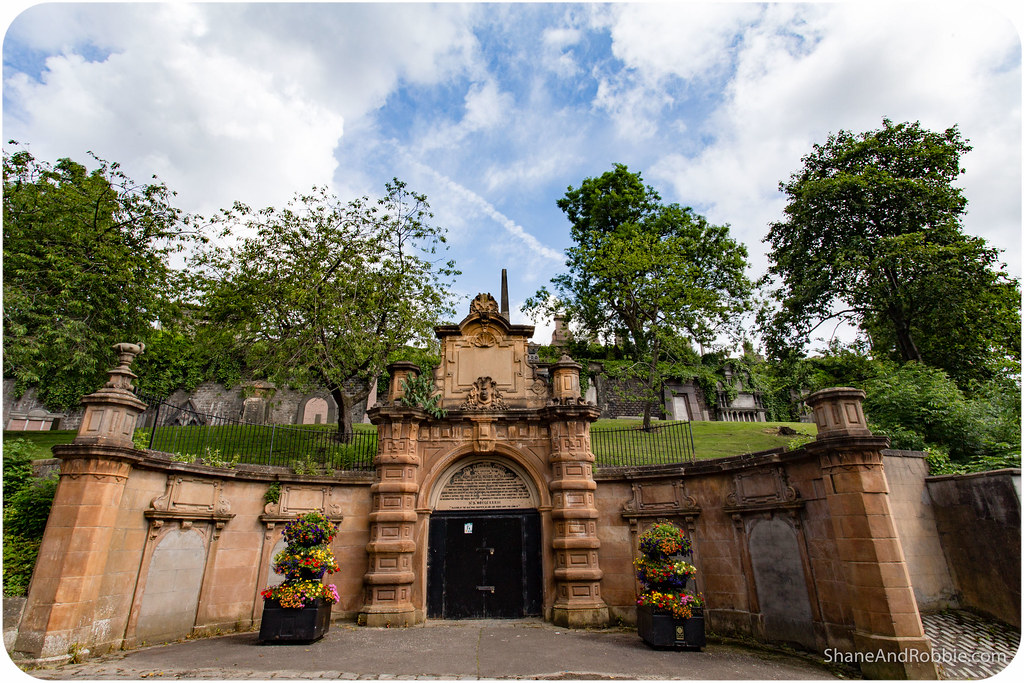 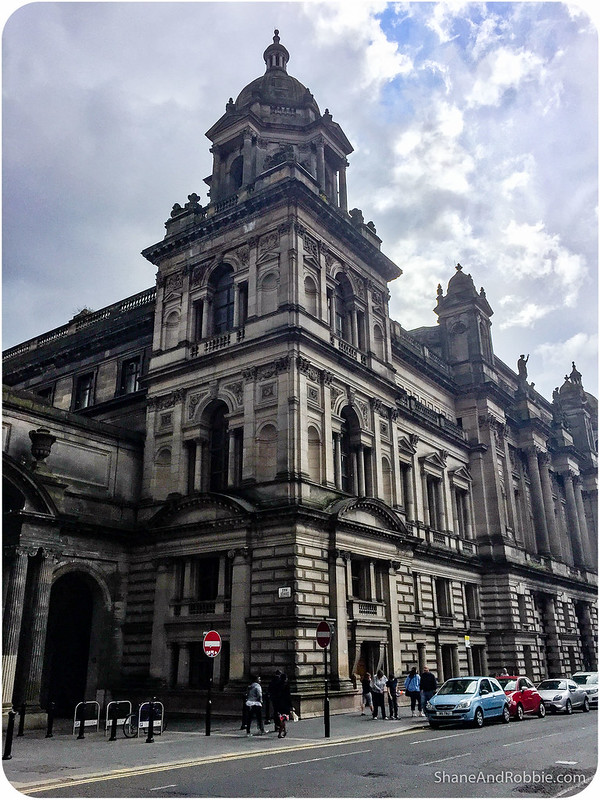 The only Medieval buildings left are all clustered together, around Glasgow Cathedral. Built in the 12th century, this Gothic church is dedicated to Glasgow’s patron saint: St Mungo. 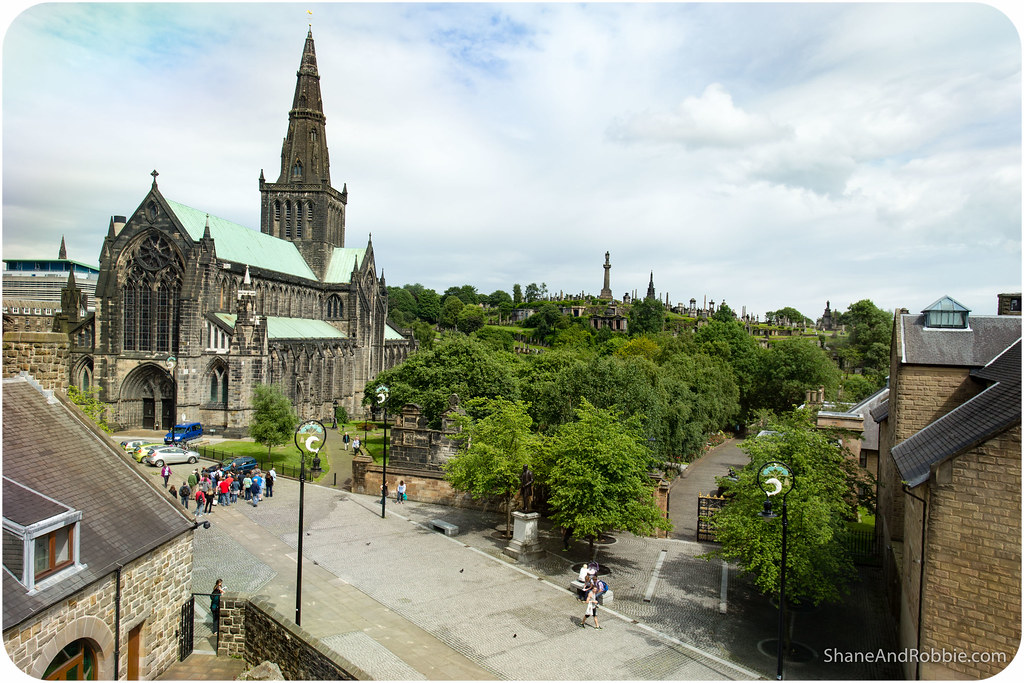 St Mungo* was a 6th century evangelist attributed with founding the Christian city of Glasgow. Glasgow cathedral is located where the St Mungo built his original chapel and houses the saint’s tomb in its lower crypt.

*Intrigued by the name we looked into it and found out that ”Mungo” is actually just a pet name for St Kentigern. The name is based on the Scottish Gaelic word for “dear one” and is used as a term of endearment by Glaswegians for their patron saint. 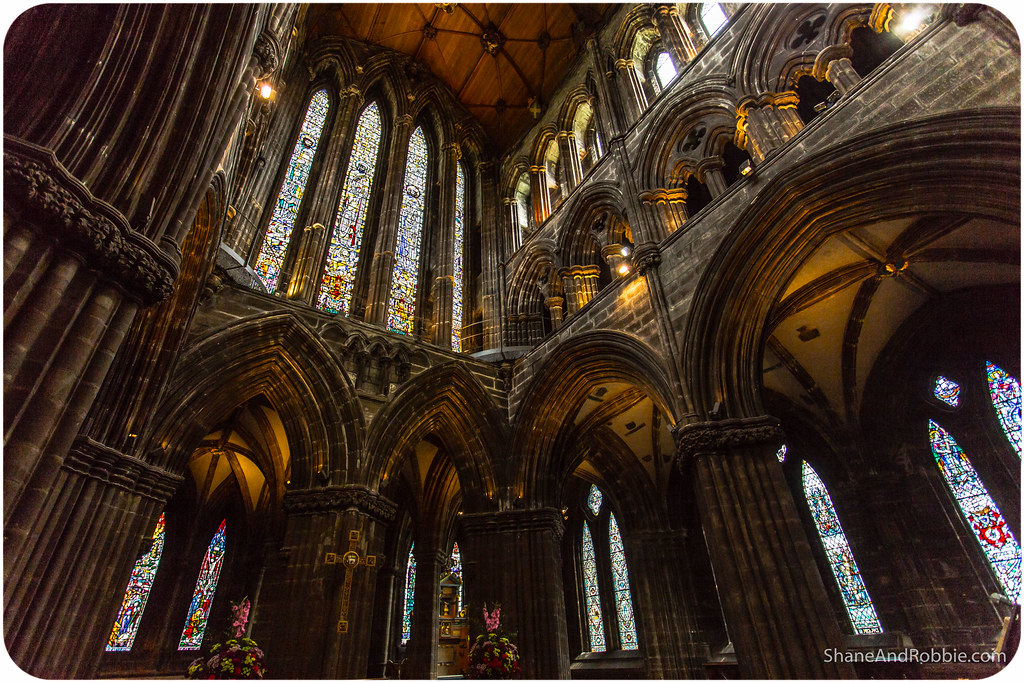 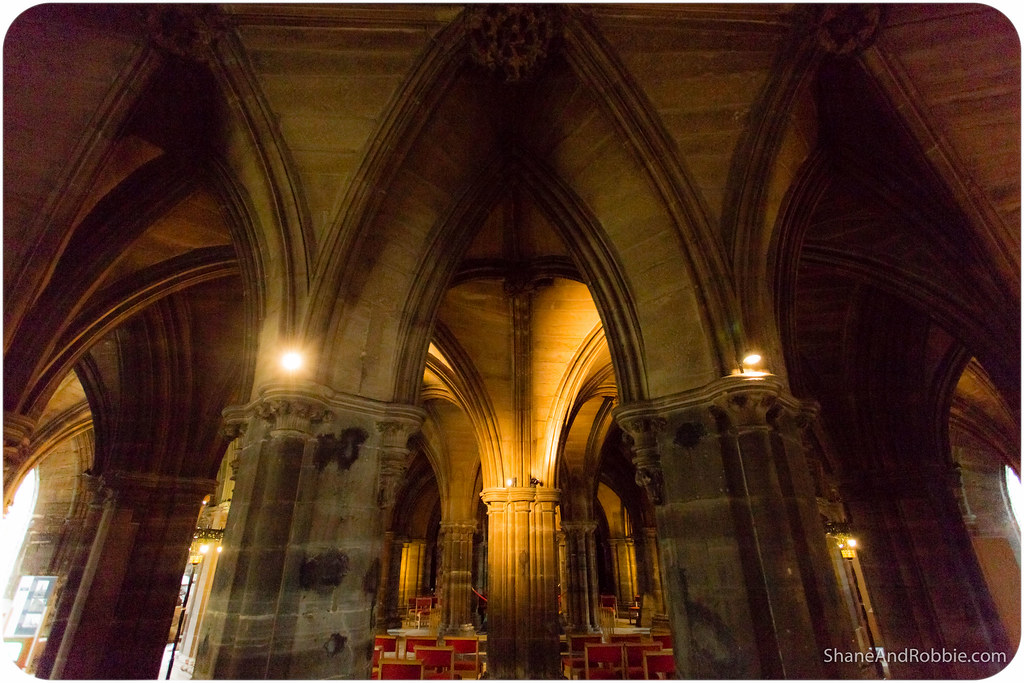 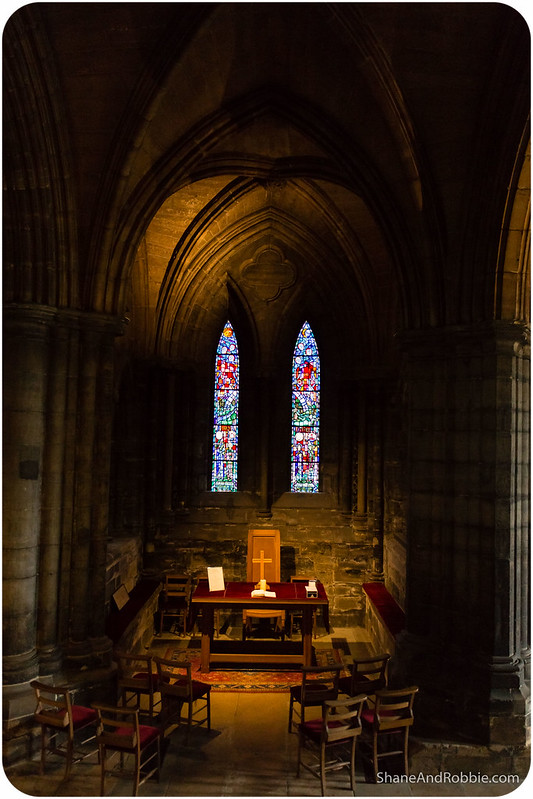 Near the cathedral we stumbled across a small museum also named after St Mungo. The St Mungo Museum of Religious Life and Art housed exhibits relating to all the world’s major religions, including a Japanese Zen Buddhist garden and a sculpture showing Islamic calligraphy. It was an interesting enough diversion, especially the exhibits that showed how various religions celebrate and mark key life events. It seems that despite all their differences, all religions have the same basic set of core rituals to help believers mark the important transitions and events in life (including death). 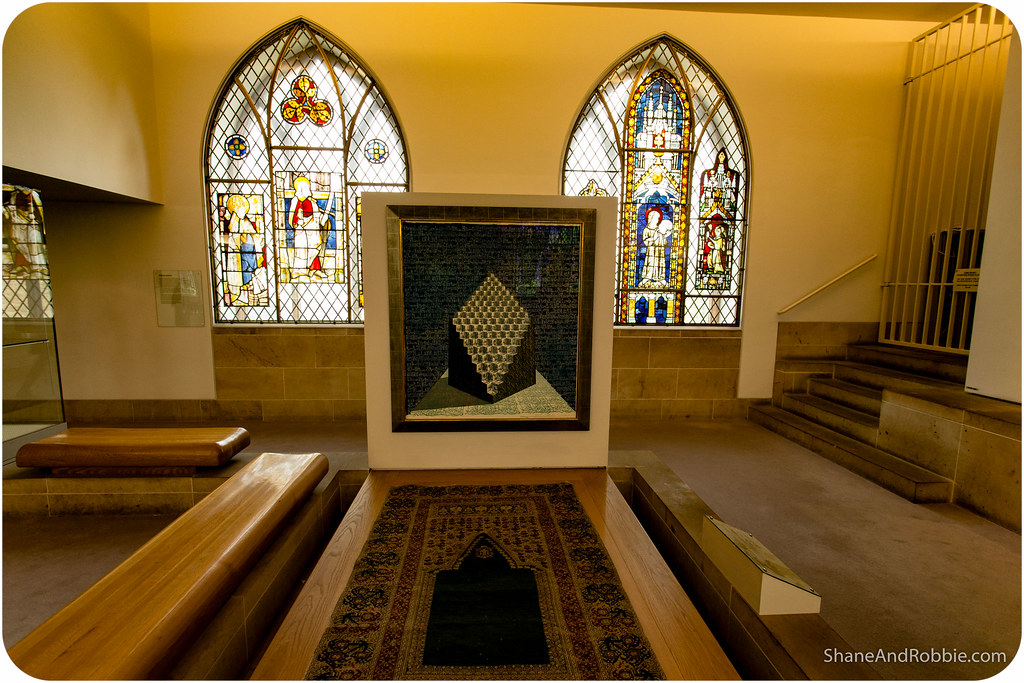 Our final stop for the afternoon was the Glasgow necropolis, a Victorian cemetery built on the hill behind Glasgow Cathedral. The sun came out for a brief moment whilst we were up at the cemetery and the views from atop the hill were great – we could see all the way across Glasgow’s city centre and out to the River Clyde. 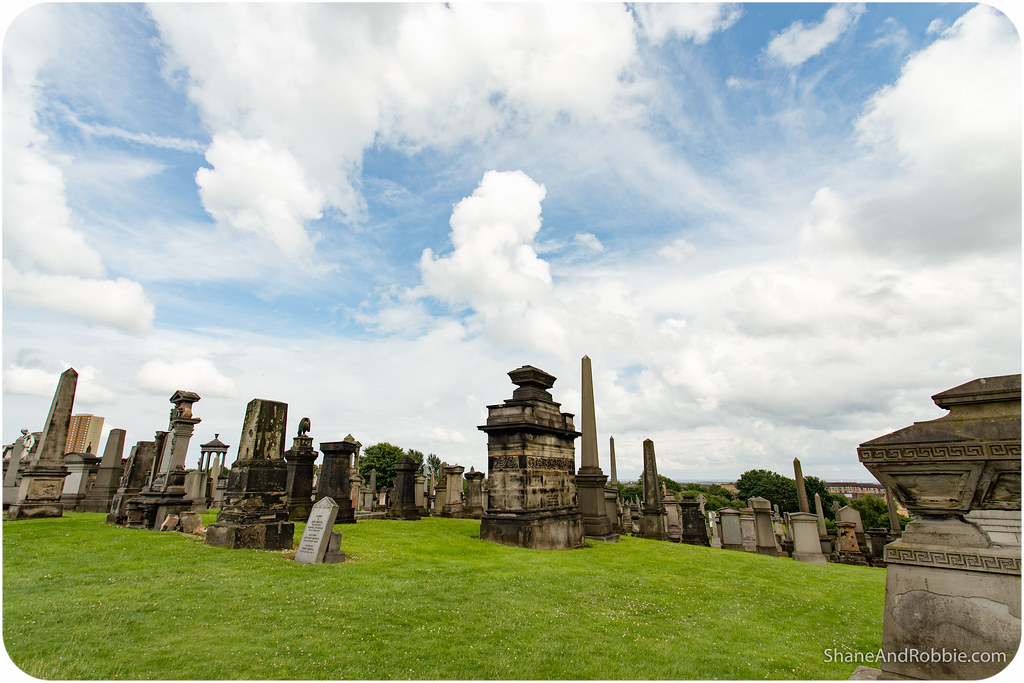 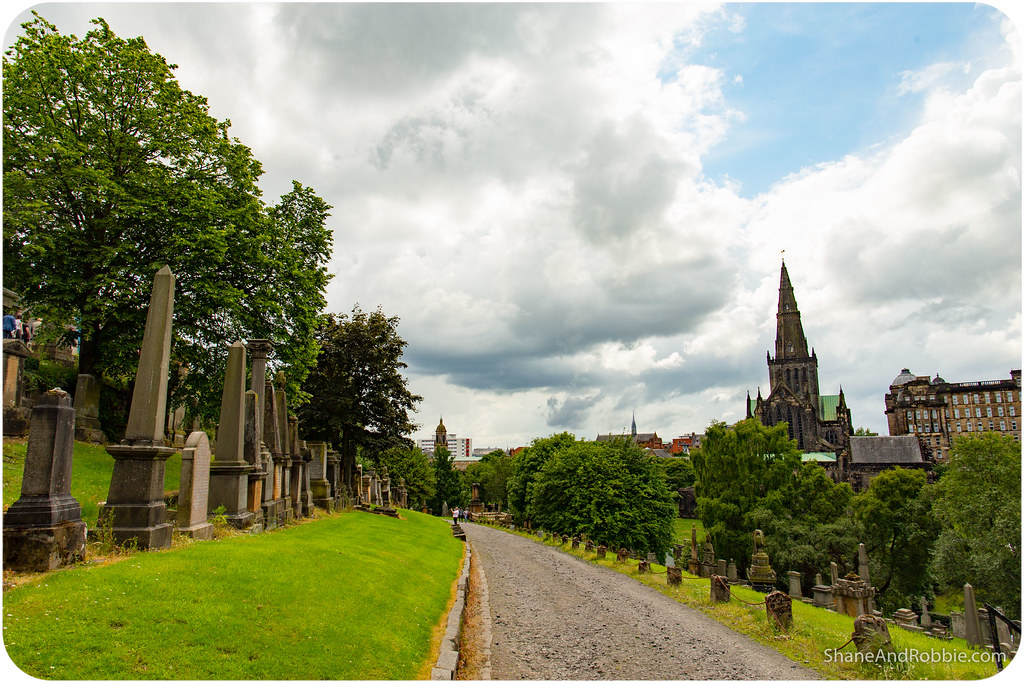 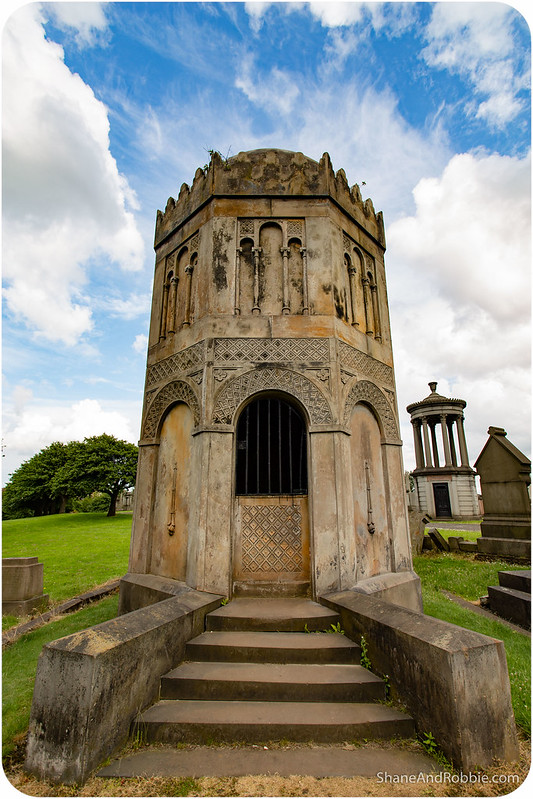 By that stage it was late enough that we were getting hungry; we soon found ourselves at little pizza place enjoying some very unScottish cuisine and pondering our first day in Scotland. Our first impressions of Glasgow are a bit mixed; on the one hand, the city itself is attractive and interesting enough, but on the other hand, the people just seem so…. grim. Obviously it’s impossible to get a true feel for a city after just one day, but first impressions can be hard to shake. No doubt there are some fantastic things about Glasgow, but we’ve not seen much to make us want to stay so we’re moving on tomorrow and heading north towards the Scottish Highlands and all the epic beauty that entails… 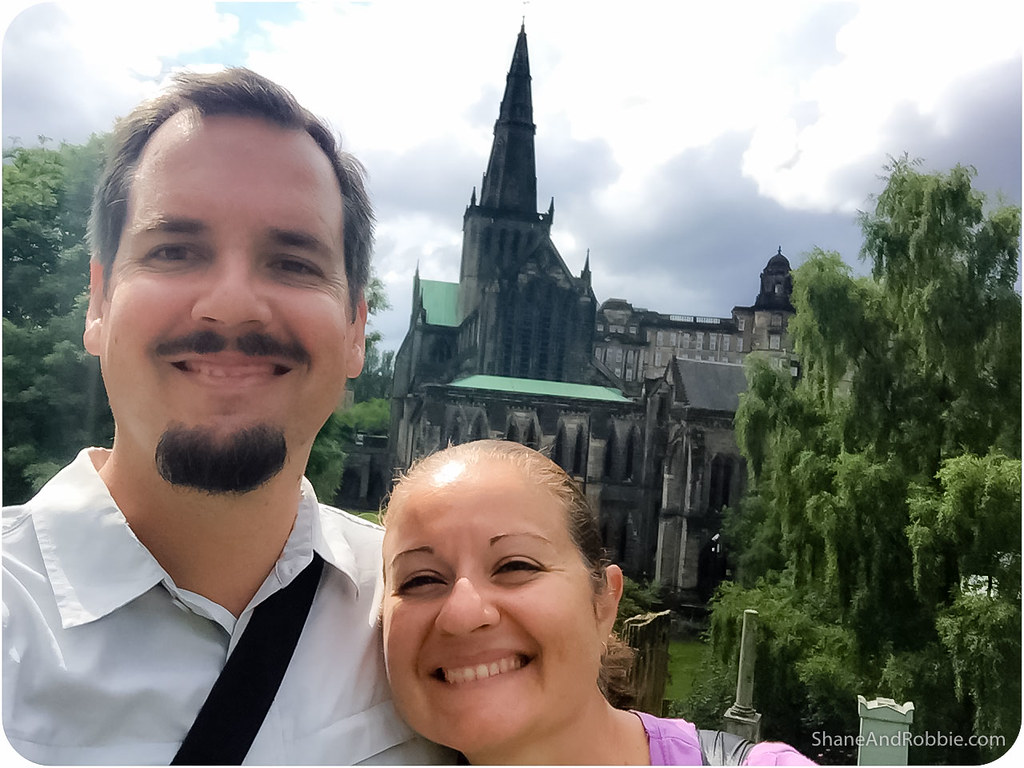