END OF THE HIGHLAND ROAD FOR US…

We pulled into the car rental place at Inverness with heavy hearts this afternoon; our Highland road trip came to an end today so we had to hand the keys back over and bid farewell to the glorious Scottish scenery we’ve become accustomed to. Our final day in Highlands finished on a high note, though (pardon the pun), with the sun shining brightly and another epic castle to thrill us. 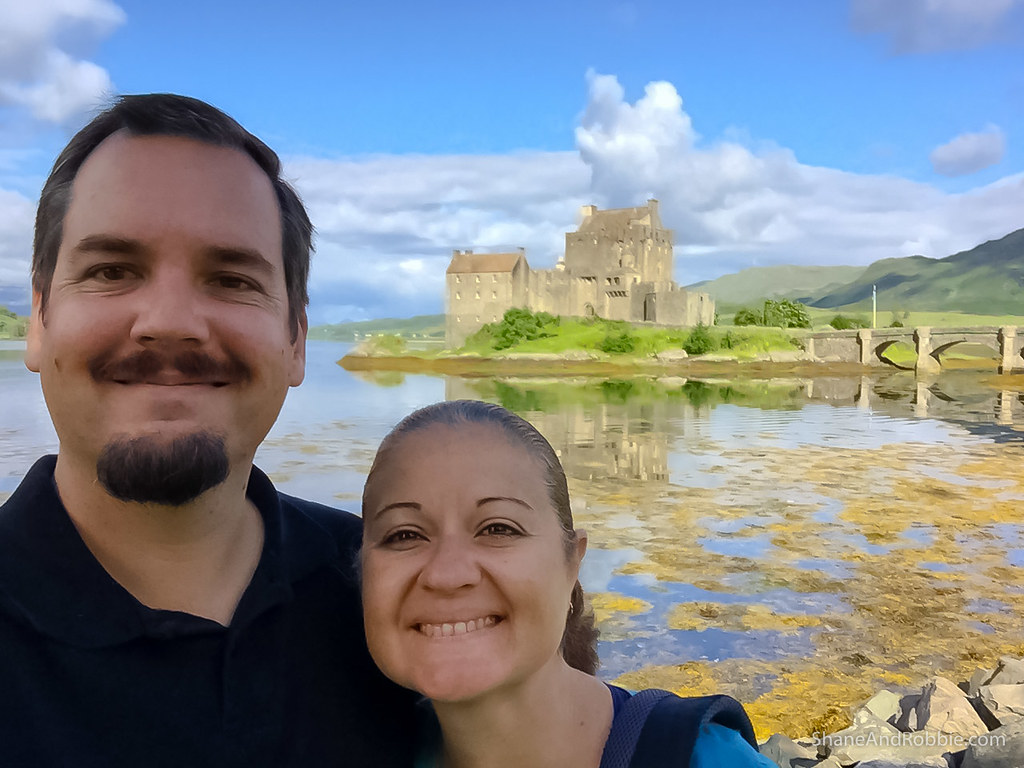 We started out with a visit to one of Scotland’s most photographed icons: Eilean Donan Castle. This beautifully reconstructed fortress is a recognised Scottish icon, frequently appearing on shortbread biscuit tins, whisky labels, tea towels, and other Scottish-themed paraphernalia. It’s also played a starring role in numerous films and TV series (e.g. in “Highlander” as the home of Clan MacLeod; as the Scottish headquarters of MI6 in “The World Is Not Enough”; and in “Elizabeth: The Golden Age”). 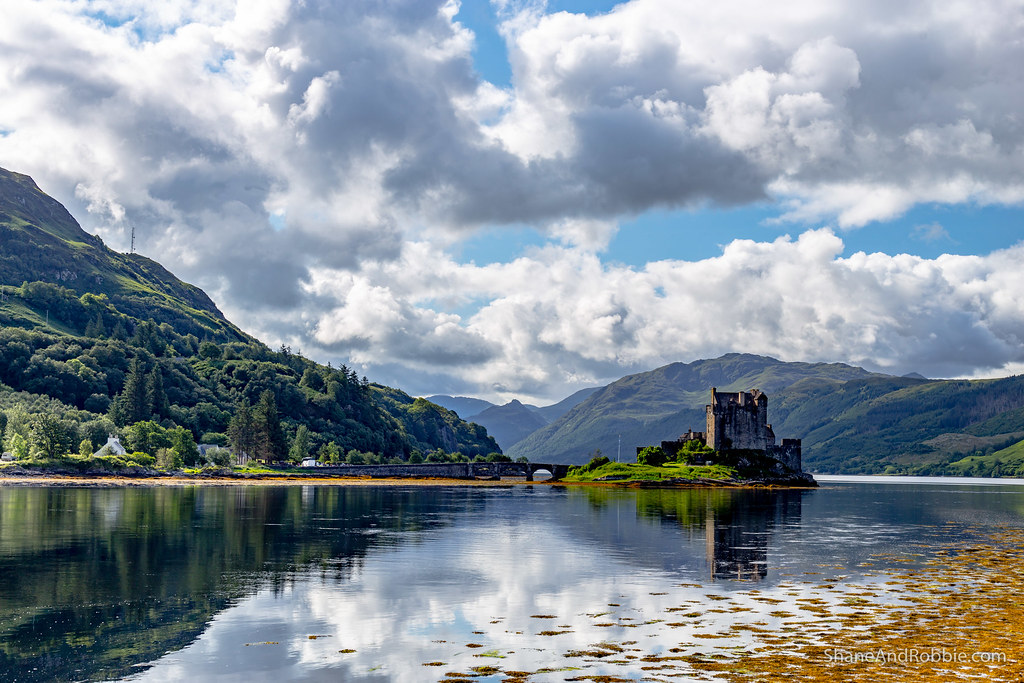 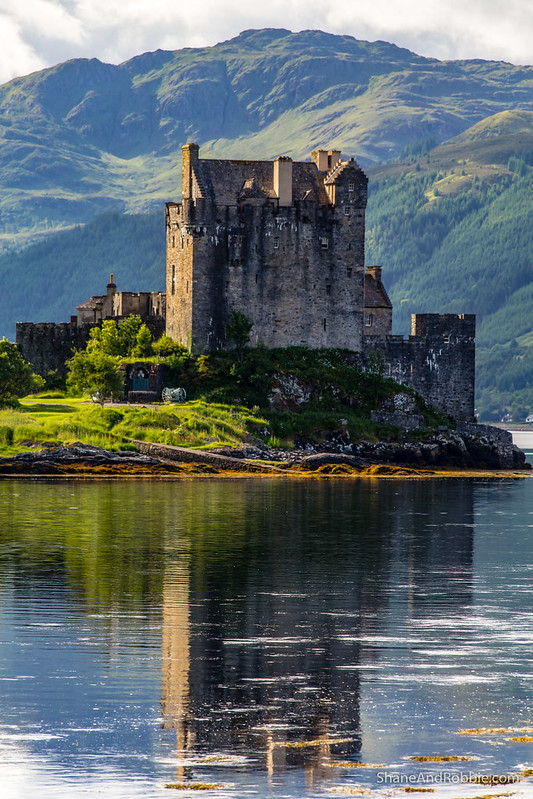 The castle sits on a small rocky island at the meeting point of 3 lochs: Loch Alsh, Loch Long, and Loch Duich. The castle was founded in the 13th century and became a stronghold for Clan Mackenzie. Unfortunately the Mackenzies’ involvement in the Jacobite rebellions led to the castle’s destruction by government ships in 1719. Not that you can tell today; the castle ruins were salvaged and the fortress rebuilt by a descendent of the family in the early 1900s. We got to explore the castle and its grounds at our own pace and without interruptions this morning as we got there right on 9:00am when it opened, well before the coaches started arriving (by the time we left around 10:00am, however, there were 10 buses in the car park). It was great – really well restored and maintained with lots of cool nooks to explore. Unfortunately they don’t allow photos to be taken inside the castle, so you’ll have to believe us when we say it’s well worth a visit! 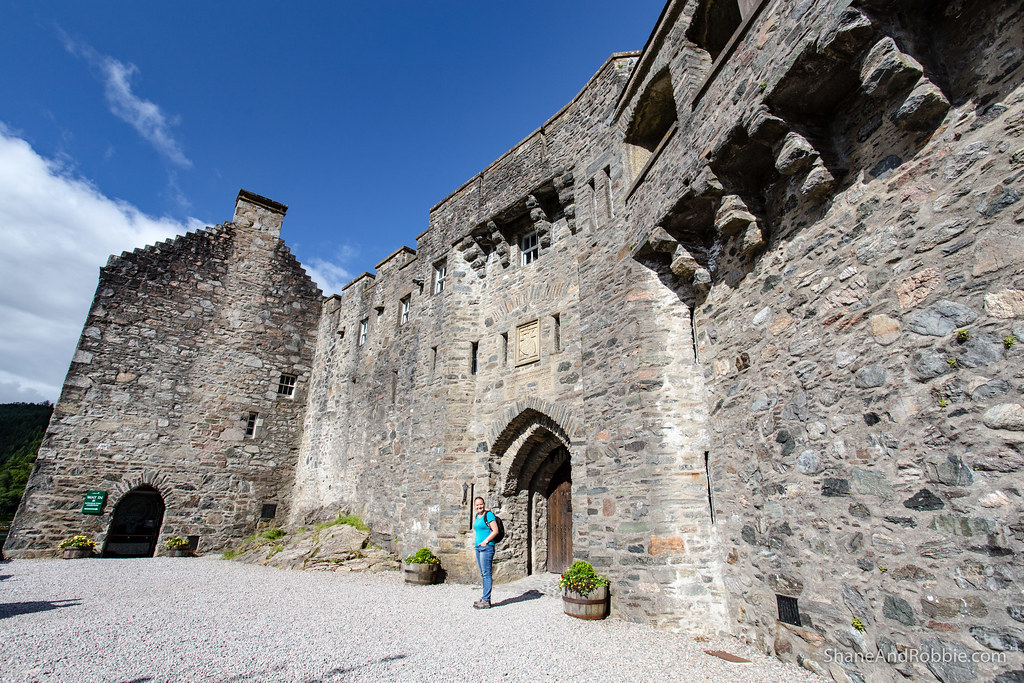 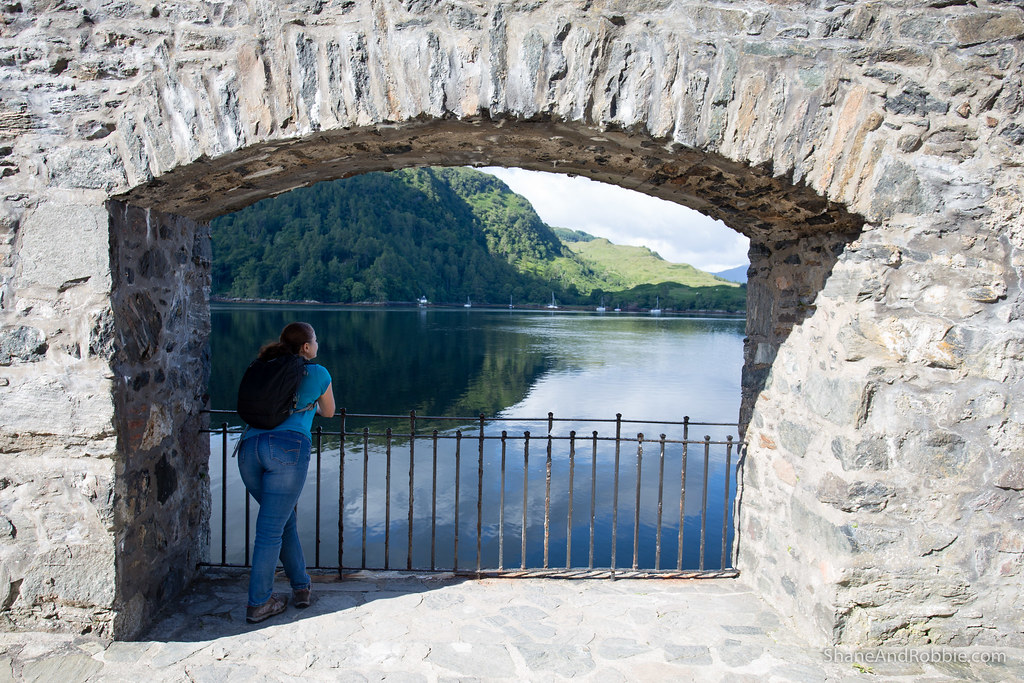 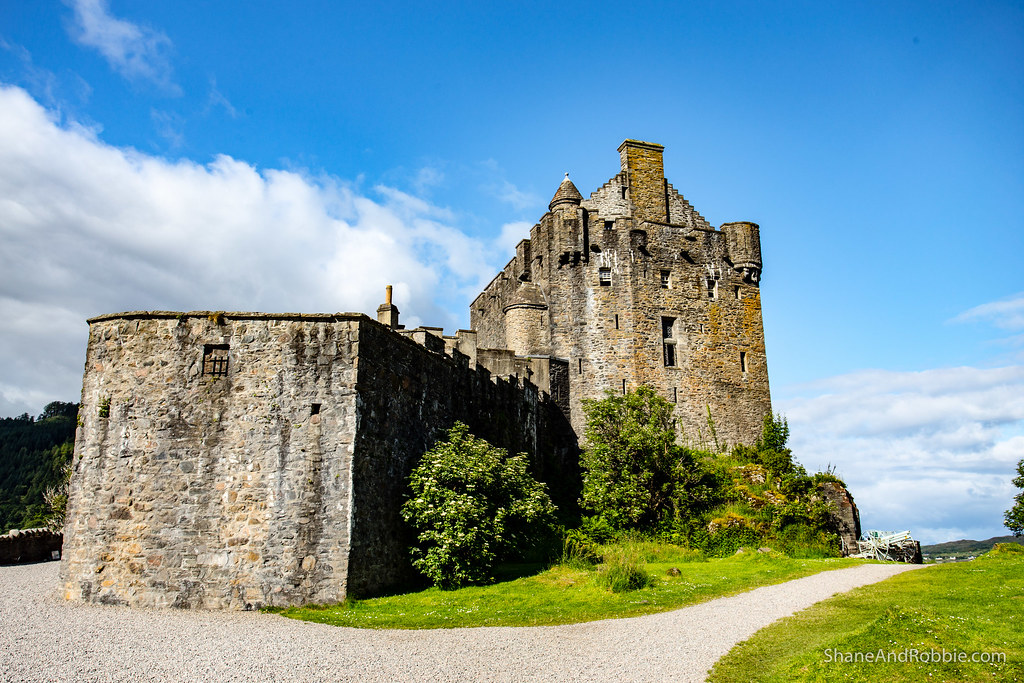 We left Eilean Donan Castle just as the car park filled up and drove along the shores of Loch Duich for a while, stopping every few kilometres for photos as the morning sun brought out the best of the landscape. Scotland in the sunshine is even more stunning! 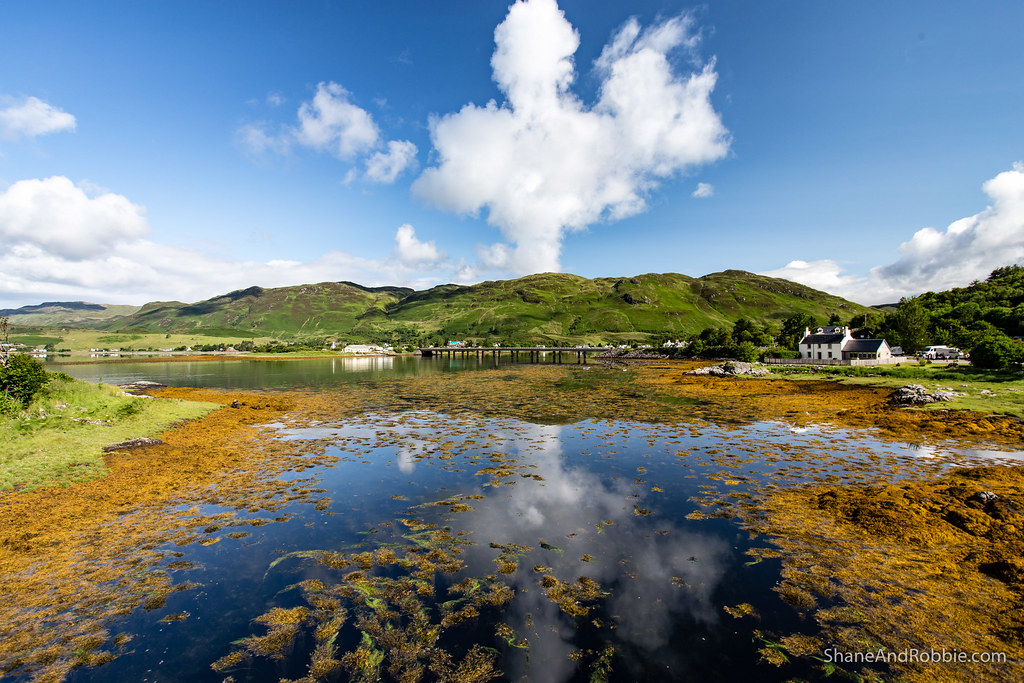 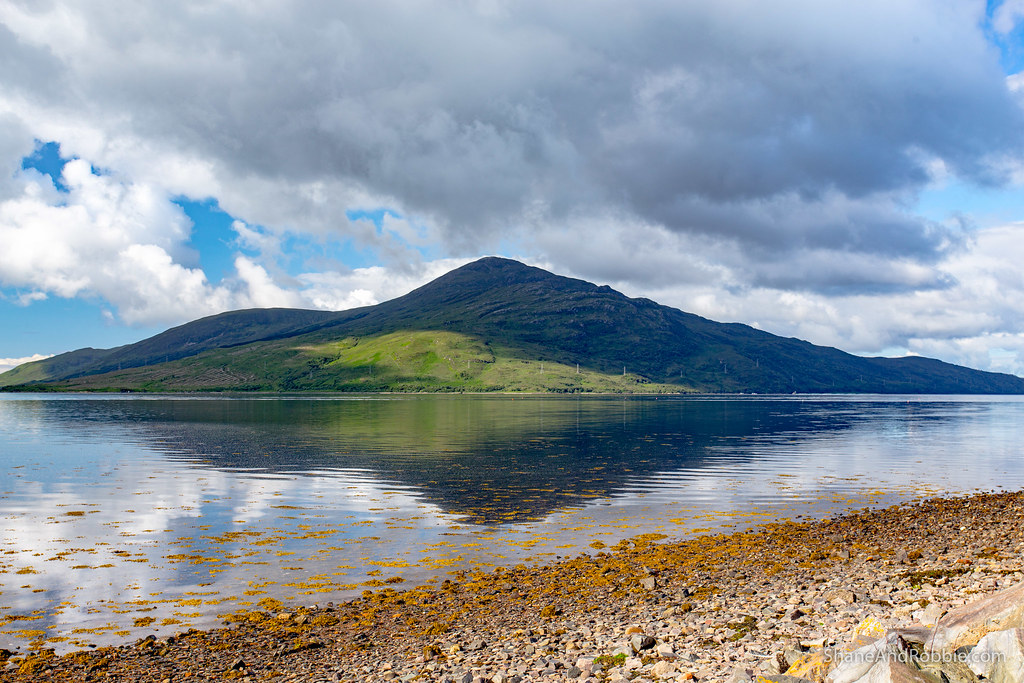 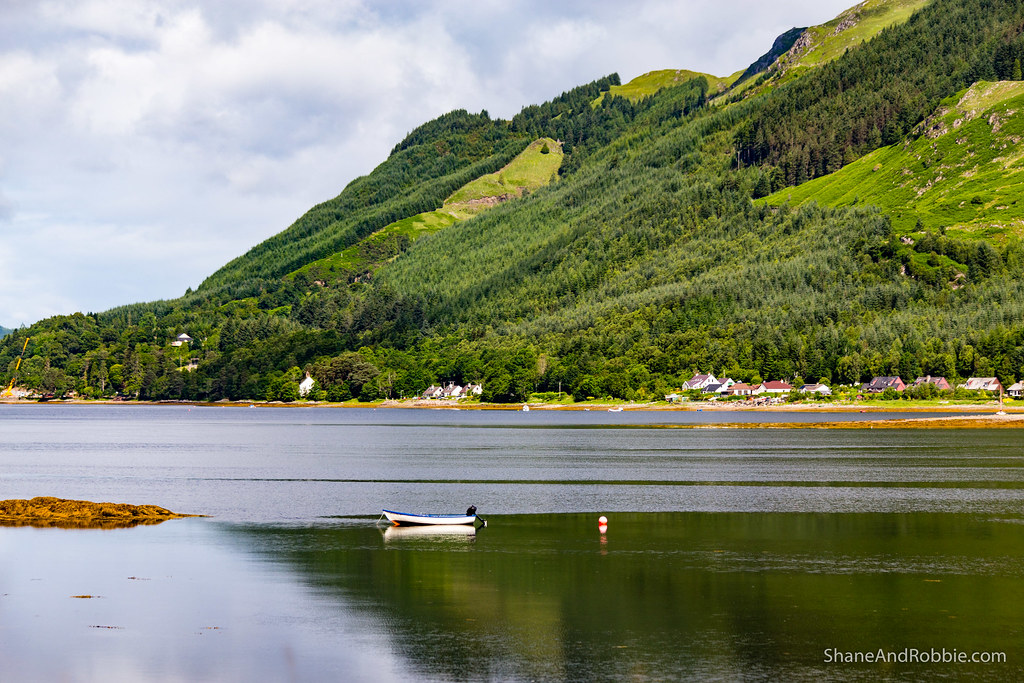 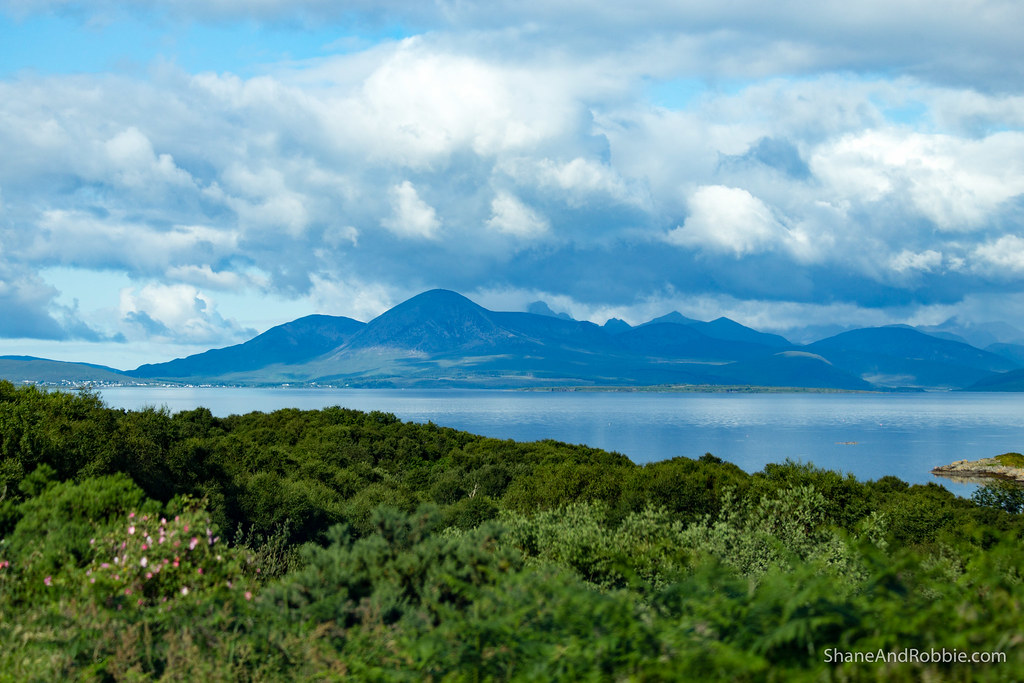 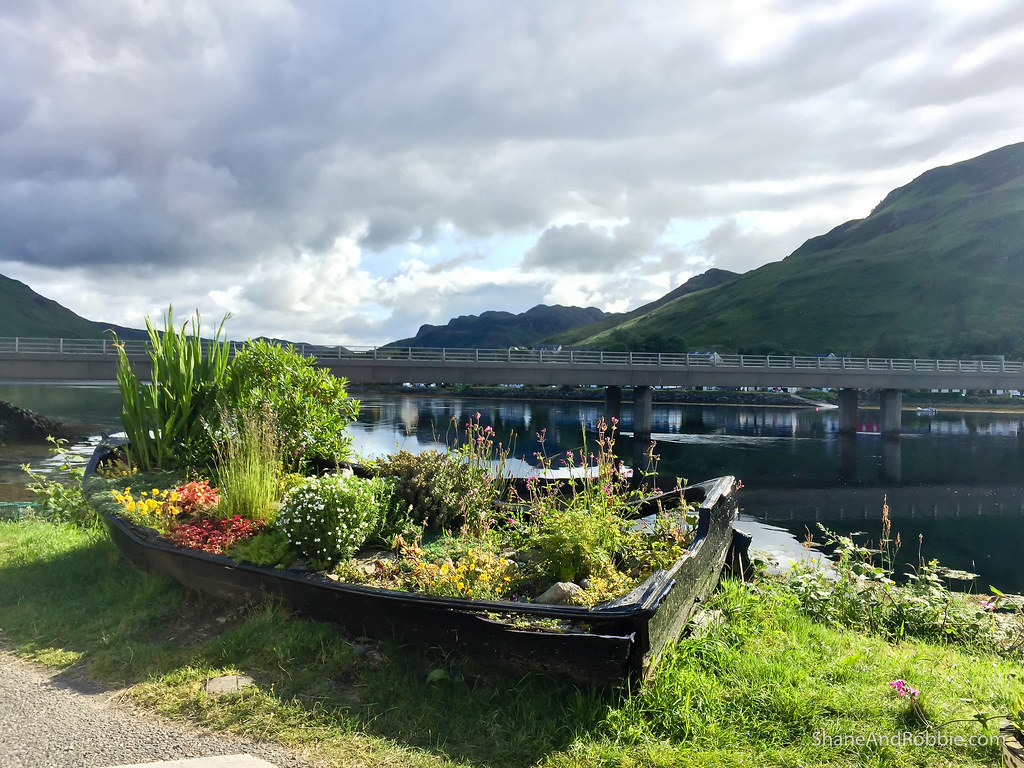 The road then wound its way through Glen Shiel, another of Scotland’s glorious valleys. The road through Glen Shiel took us past foaming river, cascading waterfalls, and craggy mountains that still have patches of snow on their peaks. Even after a week of staring at landscapes like this, we’re still not immune to their beauty and would definitely rate Glen Shiel as one of the most beautiful valleys we’ve seen in Scotland. 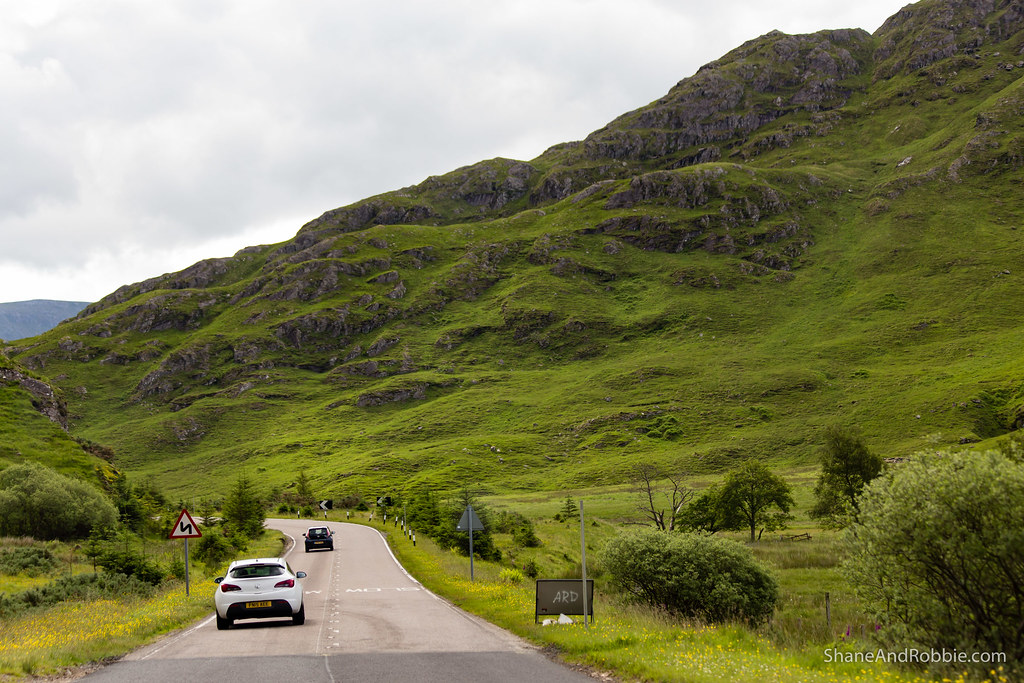 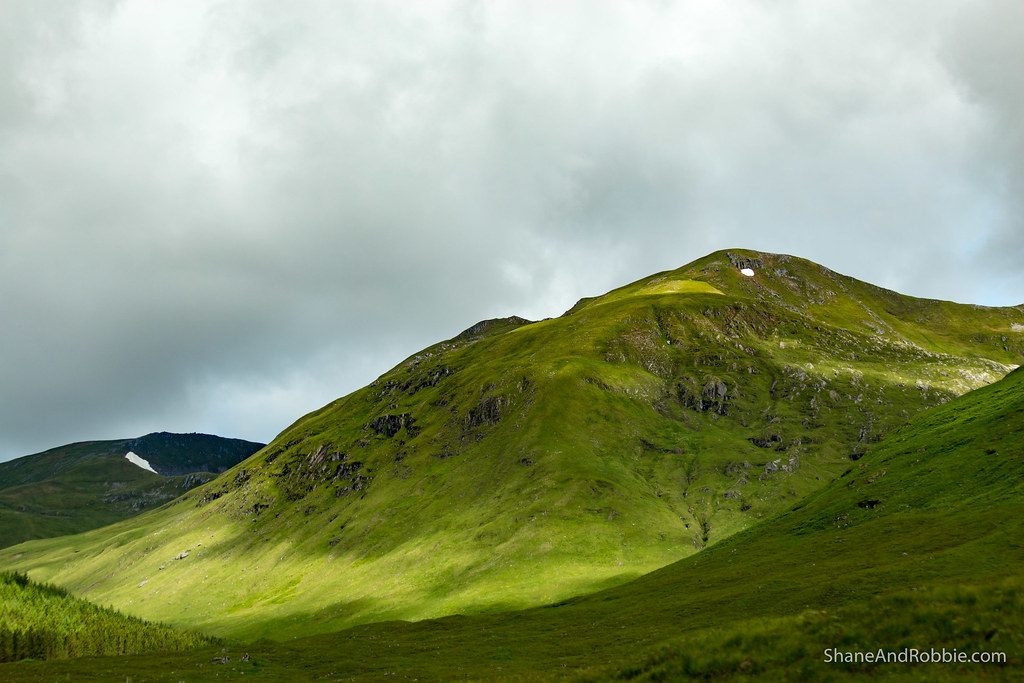 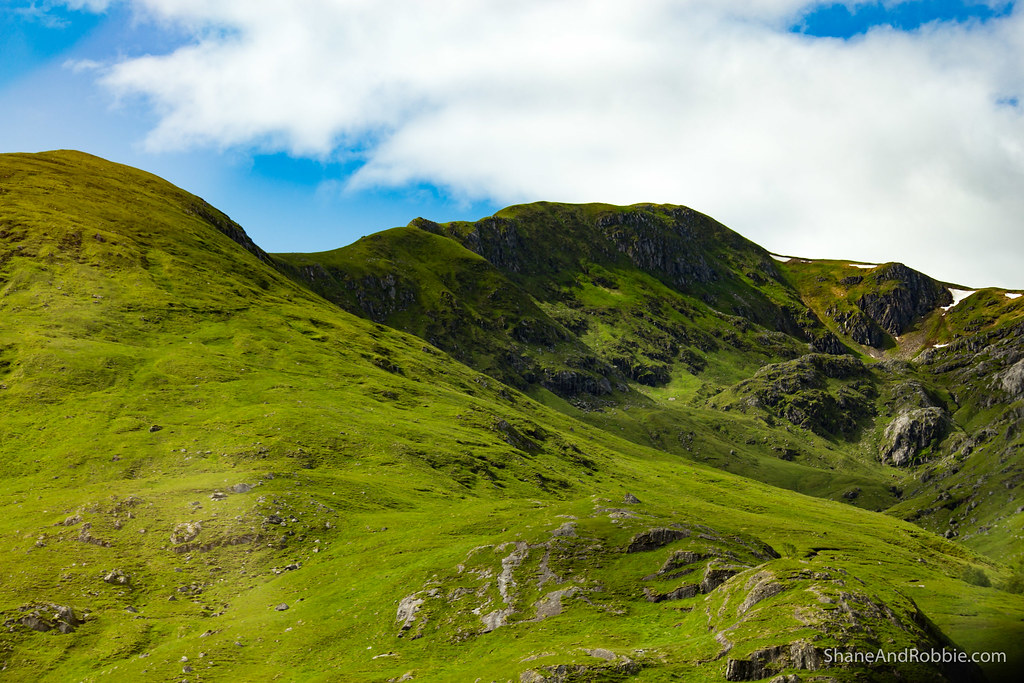 Once we pulled out onto the A82 for the final run into Inverness the views got pretty boring (for Scotland) and the traffic gradually built up, until we finally pulled into “the big smoke” (i.e. Inverness) and went back to being car-less. 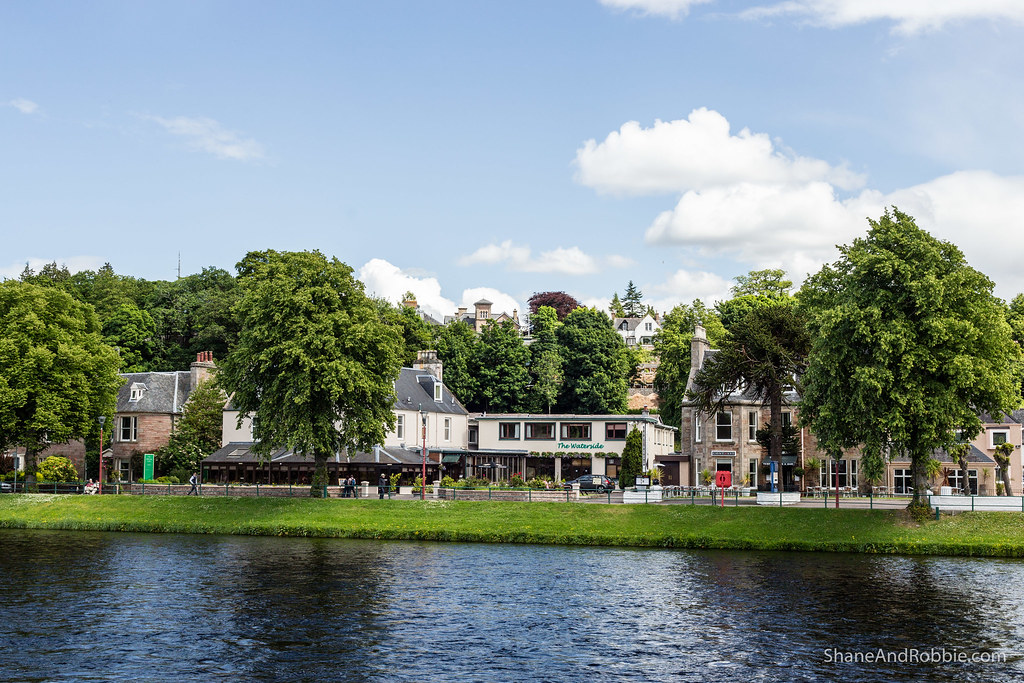 We’ve spent the past few hours here in Inverness exploring the town itself and have been pleasantly surprised: this is actually quite a cute town! Despite being VERY touristy, Inverness has lots of pretty buildings and a nice vibe to it. 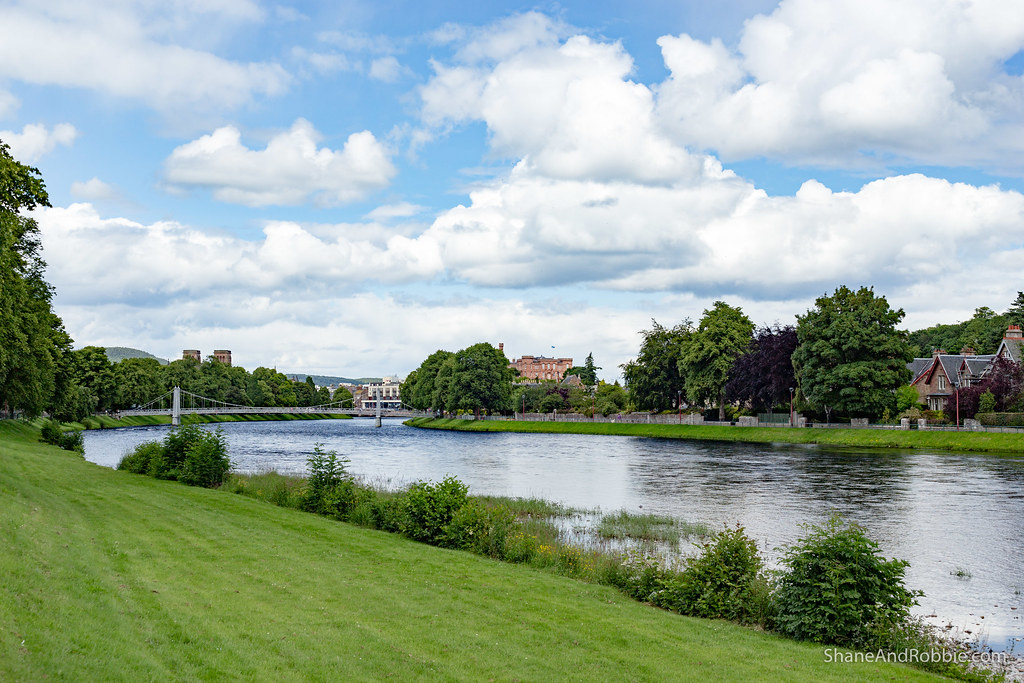 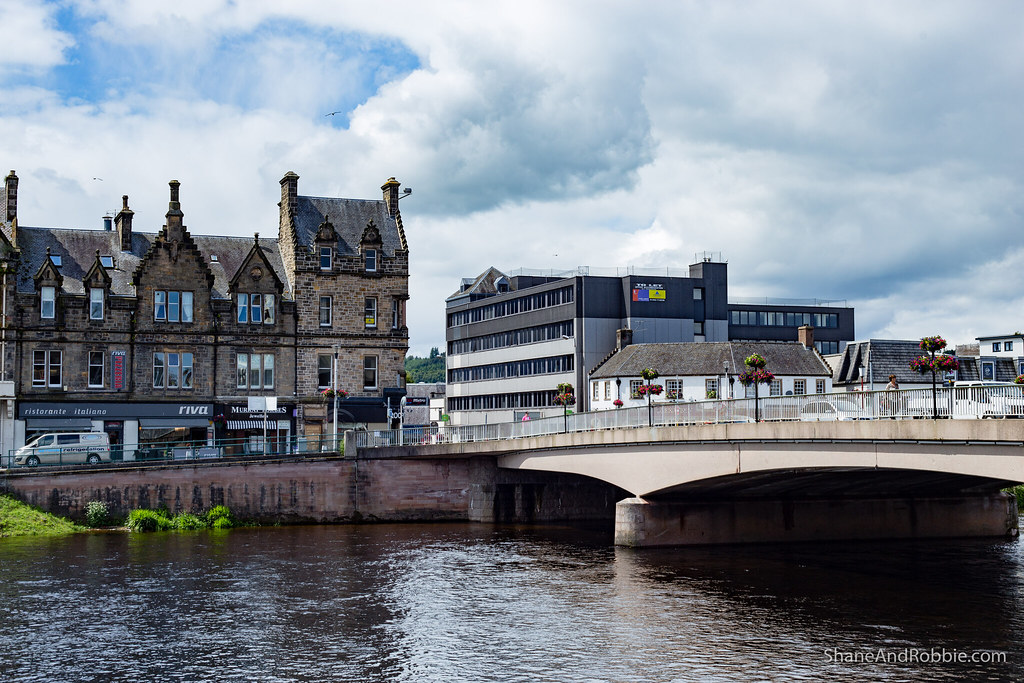 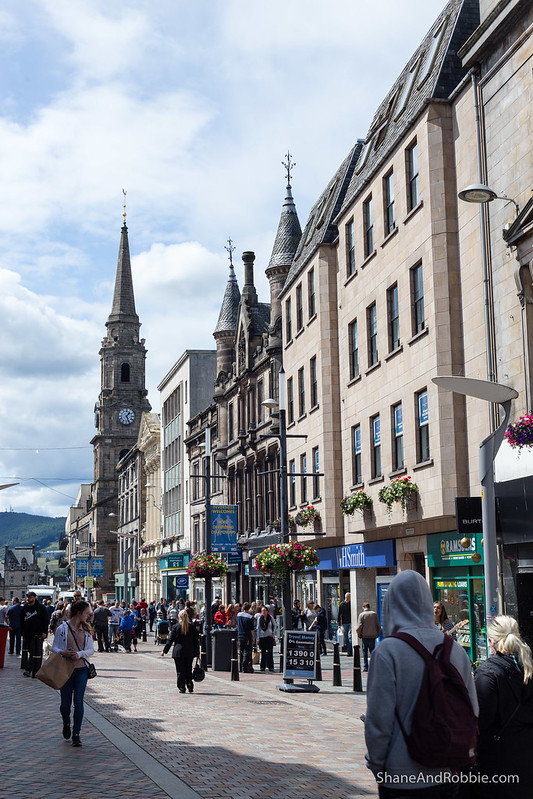 Inverness is the “capital” of the Highlands and the northern-most city in the UK. Built along the banks of the River Ness, where the waters of Loch Ness drain towards the west coast and the ocean. Given the sunshine and warm(ish) temperatures we chose to spend most of our afternoon strolling along the banks of the River Ness, down to the Ness Islands and back to the town centre. It was a lovely afternoon wander and left us thinking Inverness is worth another visit! 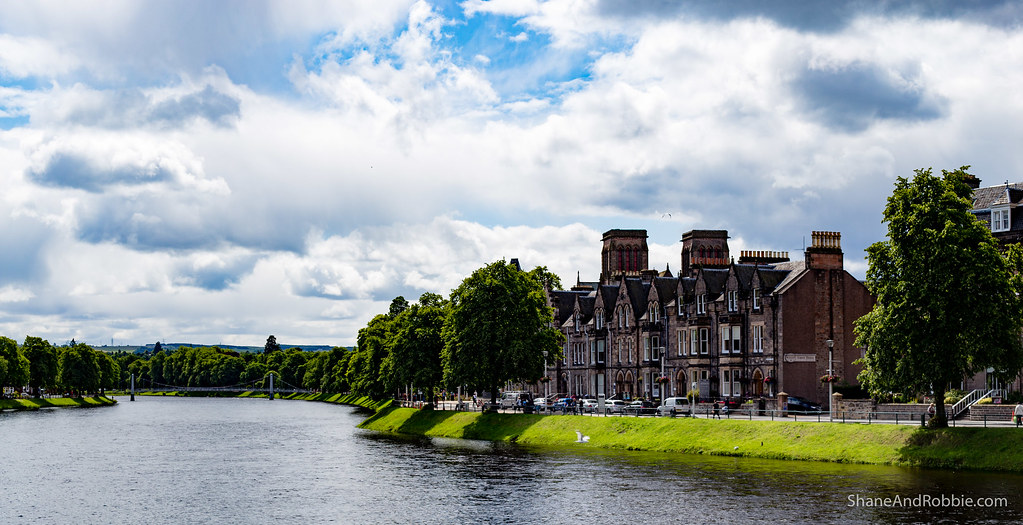 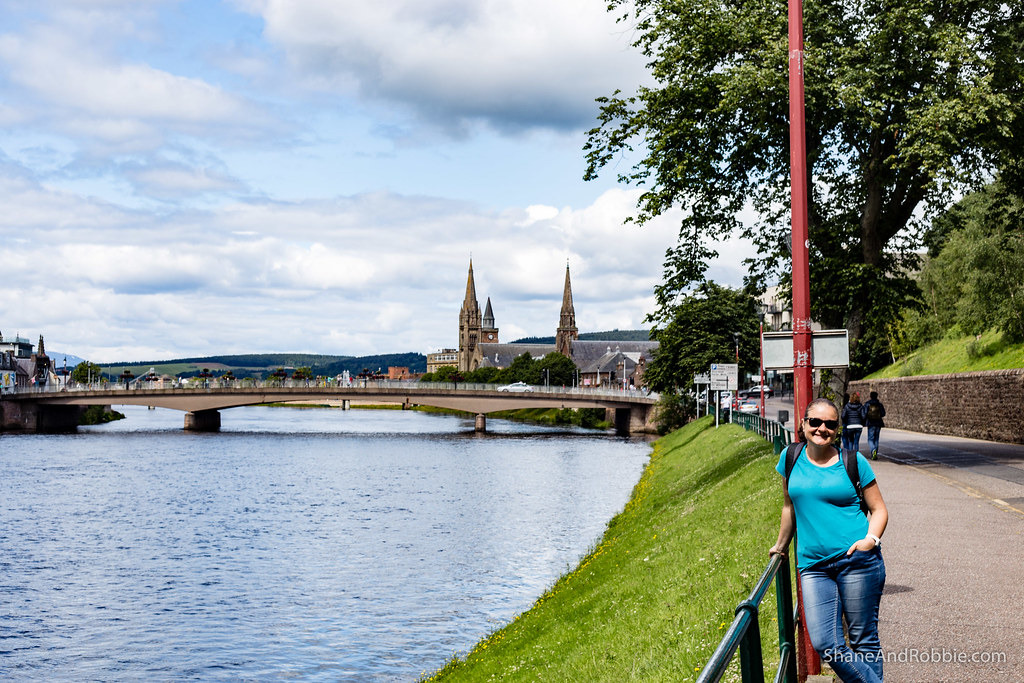 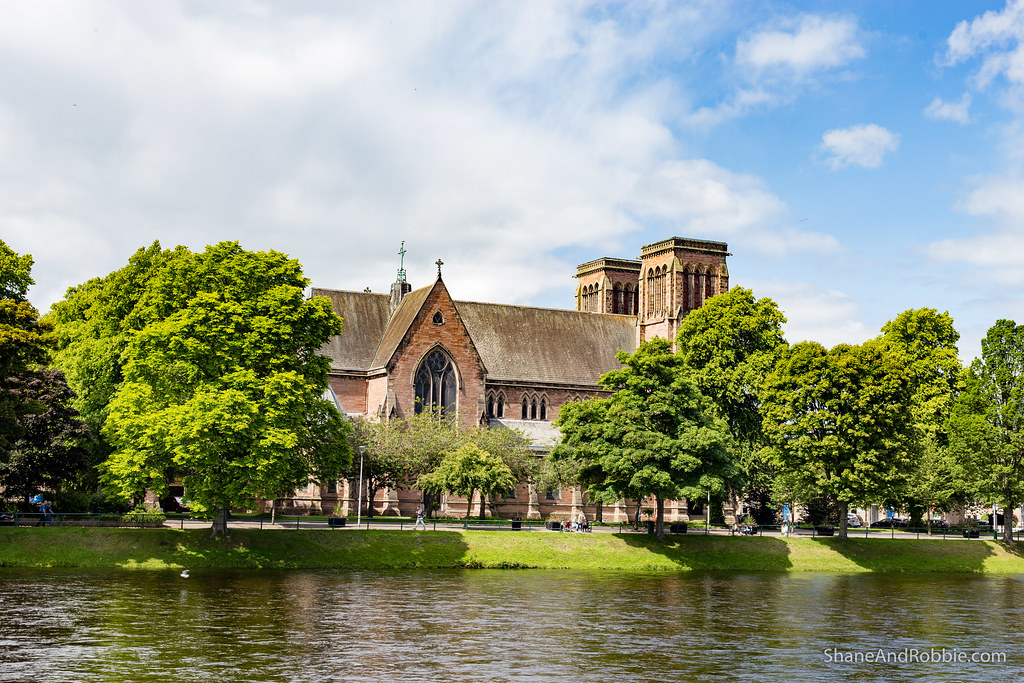 One of the town’s main architectural highlights is Inverness Castle, a red sandstone structure built in 1836 which today houses the courts of Inverness. A succession of castles has stood on the site since 1057, including the castle in which Macbeth of Scotland murdered Donnchad of Scotland. Nothing like a bit of Highland intrigue… 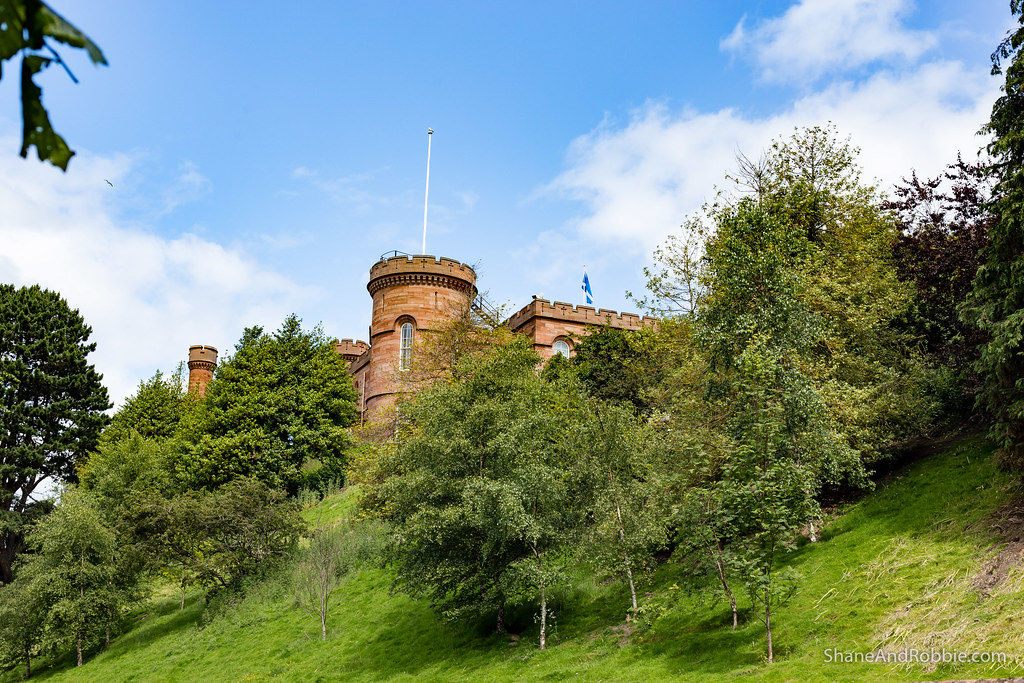 After another day exploring around the Highlands we’re now attempting to address our sadness (at having to leave the Highlands) at a local pub. A couple more drinks and we should be ready to accept that we’re leaving for Edinburgh tomorrow… 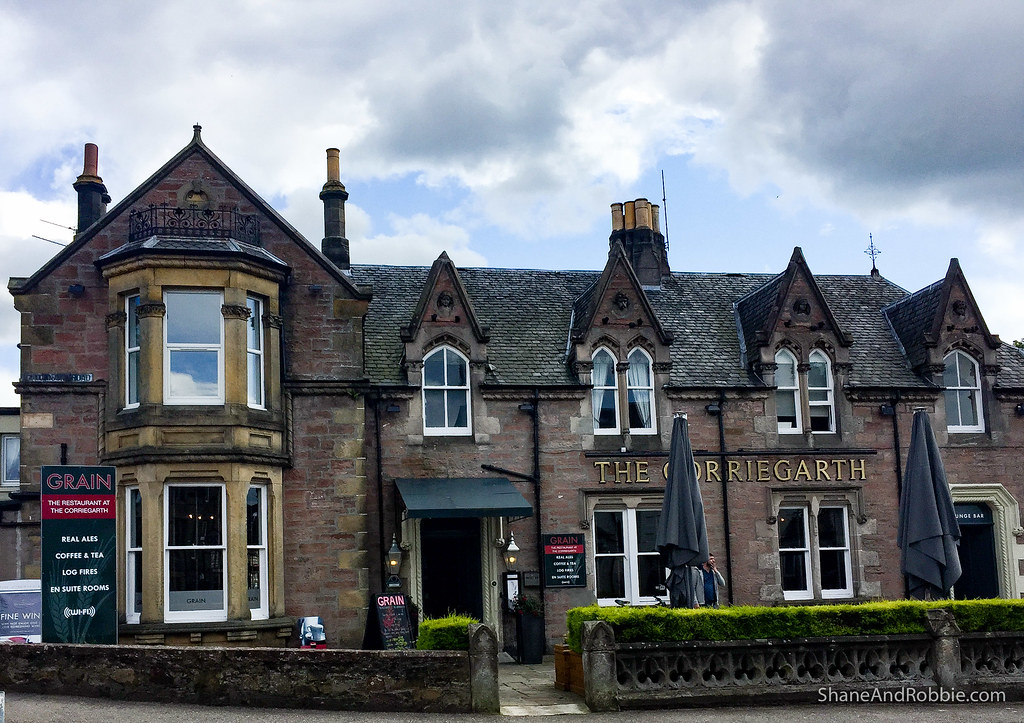 To anyone who hasn’t been to the Scottish Highlands we say: DO IT! Our trips for making the most of your visit include:
• Be prepared to take your time – we zipped through the Highlands too quickly and really want to come back and do it all again, much slower.
• Don’t limit your explorations to the Isle Skye and Inverness; sure see them, but go further afield and prepare to have your socks knocked off!
• Prebook your accommodation in peak season or risk getting stuck with some truly craptacular digs. Better still, travel off-peak (i.e. NOT July or August) and have your pick of lodgings and take your time.
• Don’t scrimp on accommodation – the difference between a hotel room worth $60/ night and one that costs $100/night is MORE than worth the added expense.
• Stay in B&B and guesthouses away from the main towns, it’s so awesome being able to wake up by the lochs and in the glens rather than in town.
• Be prepared to spend more money than you think – it gets expensive up north in the remote parts of the country (which is fair enough, you’re MILES from anywhere up there).
• Eat the seafood! Langoustines, lobsters, salmon, mussels, oysters, haddock – it’s all amazingly fresh and delicious.
• Avoid haggis, it’s not food.
• Hire a small car – the roads are all sealed so you don’t need a 4WD. Also, given that the roads are very narrow at times, a big car would just be awkward
• Be prepared to go slow on the narrow roads and learn to use the passing places.
• Watch out for the sheep, wild goats, deer and other random road traffic when driving.
• Even if the weather’s foul, GET OUT THERE! The weather is so changeable and what starts out as a wet, windy day can turn out spectacular. Also the cloudy weather can make the scenery even more interesting, giving things a moody overtone that we learnt to love.
• Get off the road and into nature. Take time to go hiking, to do one or two of the many cruises around the lochs to see seals, otters and sea birds.
• Talk to the locals – we found Scottish people to be a little reserved at first, but crack a joke and they open up straight away. They’re crazy, funny, friendly and absolutely worth their weight in gold. There are some pretty “rough” people living out in the sticks up north, but they were all wonderful to us.

Since we left Glasgow we’ve been immersed in the wonder of the Scottish Highlands and we have absolutely LOVED it! We have fallen in love with this amazing landscape and its people, and cannot wait to return one day. 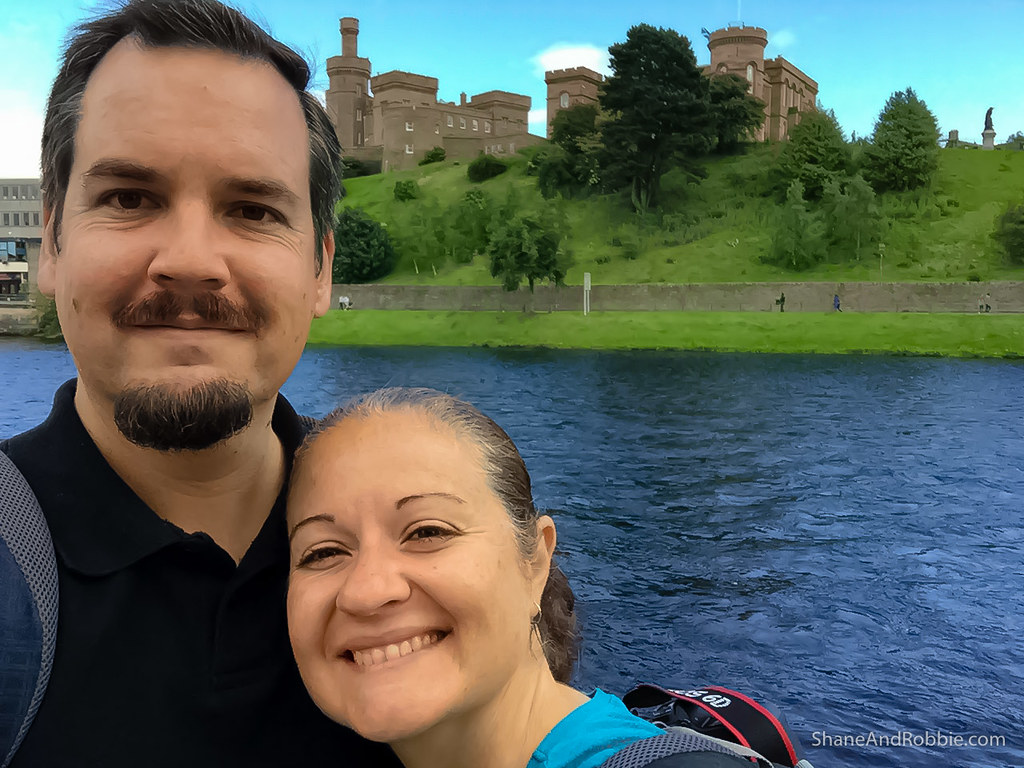