CLOSE ENCOUNTERS OF THE ORANGUTANG KIND

Our encounters with Borneo’s orangutangs to this point have been tempered by distance, basically because they were high up in the trees and we were 60-70m below in our river boat. Today, however, we got to see orangutangs up close – almost too close in the case of this cheeky young guy…. 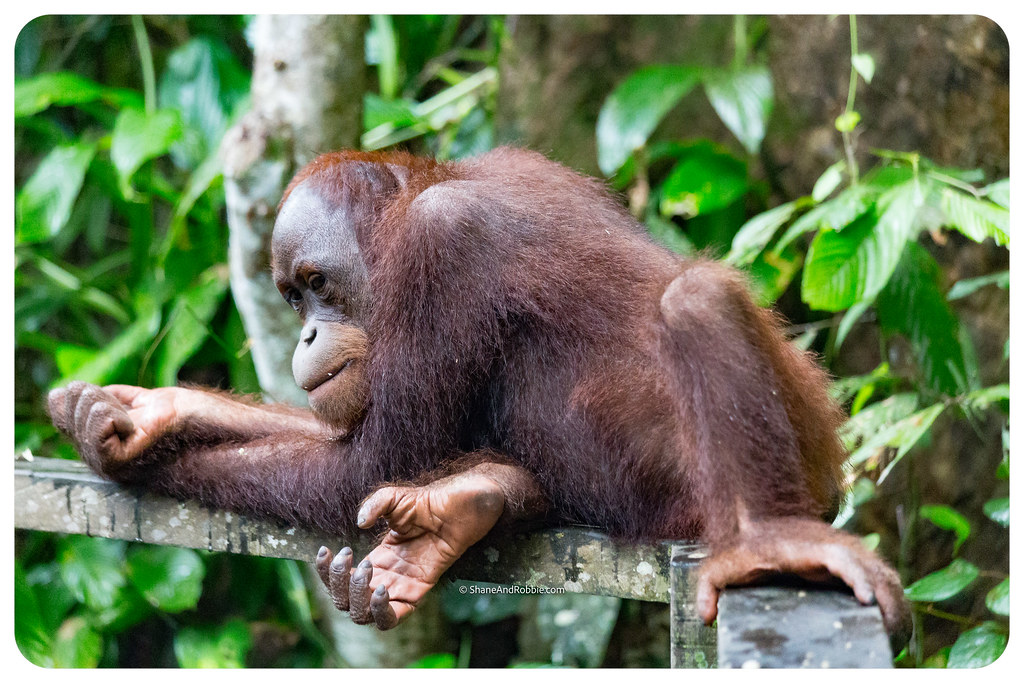 We visited the Sepilok Orangutang Rehabilitation Centre (SORC) today and saw for ourselves how strong and ingenuous these apes can be when this young orangutang decided he found one of the other tourists’ camera bag particularly colourful and attractive*. This youngster came right up to the tourists on the wooden walkway that winds its way through SORC and literally chased the lady with the colourful camera bag. Unable to steal her bag, the orangutang settled for her shoe – ripping the rubber sandal off her foot**. Once he had the prized item in hand, he raced off up into the trees faster than we thought was possible. Seems our orangutang friend got a new prize to add to his collection…

*We were warned repeatedly coming into the sanctuary that the animals we would see are not tame and like colourful things. We were strongly encouraged to leave all bags, umbrellas, and accoutrements in the free lockers provided to avoid tempting the younger orangutangs. Not everyone heeded the warnings however and that one hapless tourist suffered the consequences of her choice. Lesson of the day: do NOT take anything bright, colourful, shiny, dangly, or loose into SORC. Unless you’re prepared to risk losing it to an orange critter with a penchant for collecting touristy paraphernalia!

**The funniest part of the whole episode was hearing one of centre’s rangers warning people to hurry up and move along when the young orangutang first landed on the walkway balustrade. His exact words were, “Move along now. Move along. You need to move. Move NOW.” When most of the tourists refused to budge, instead actually moving CLOSER to get photos of the creature, the ranger shrugged his shoulders, walked away, and just said, “Fine – I told you.” 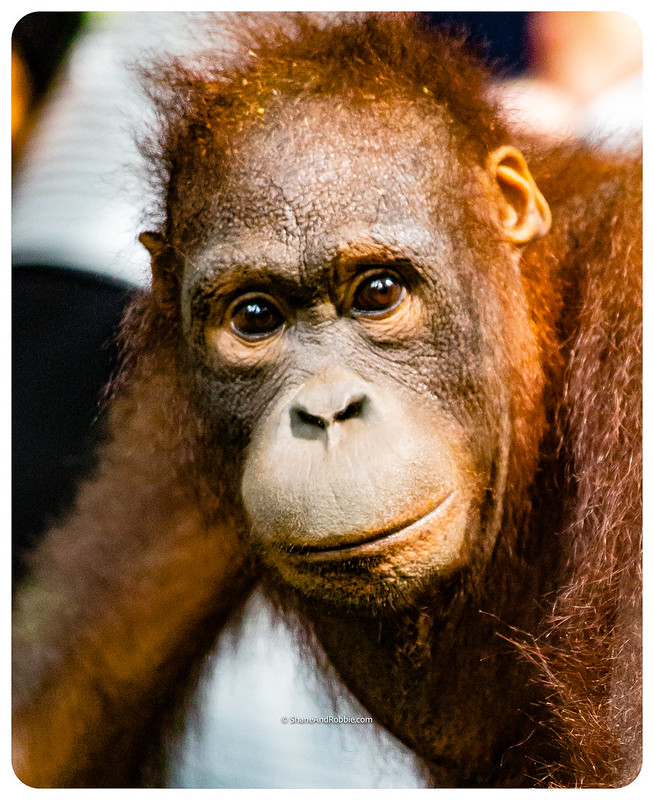 SORC opened in 1964 as the first official orangutang rehabilitation centre for rescued orangutangs from logging sites, plantations, private homes, or poachers. Thanks to the joint efforts of a passionate English conservationist, Barbara Harrison, and the Malaysian government, 43 square kilometres of jungle have been set aside to house, protect, and rehabilitate a population of around 80 orangutangs. 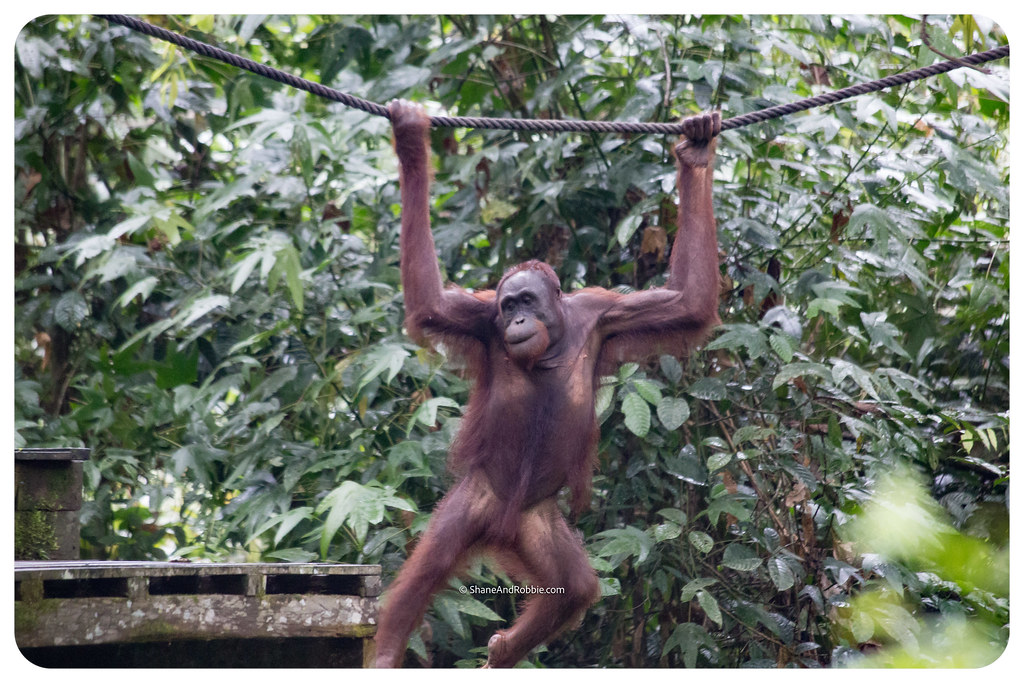 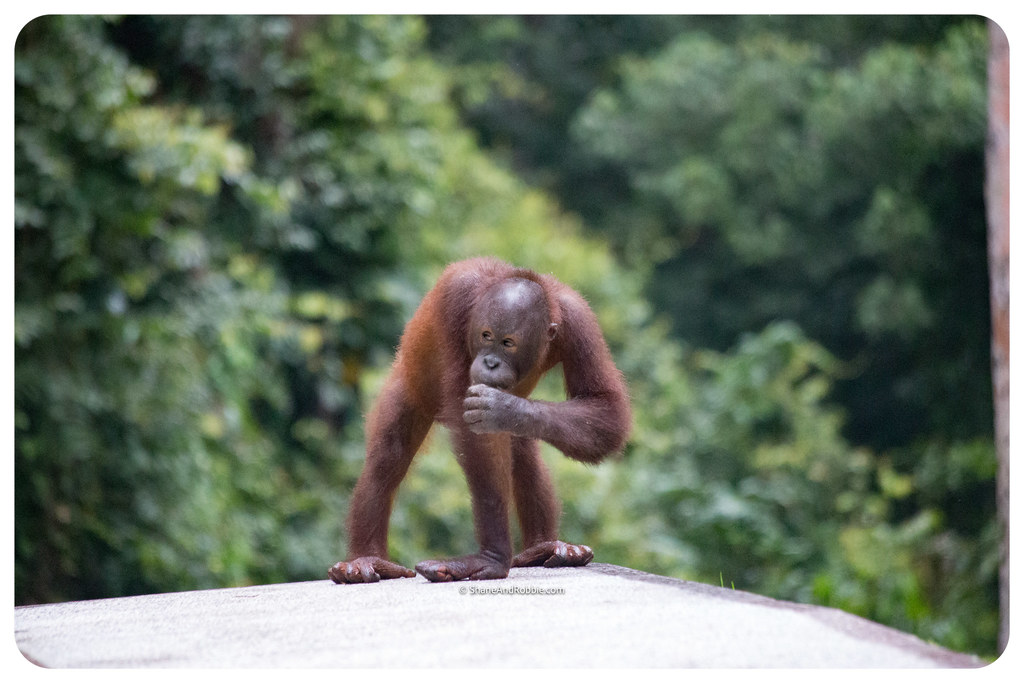 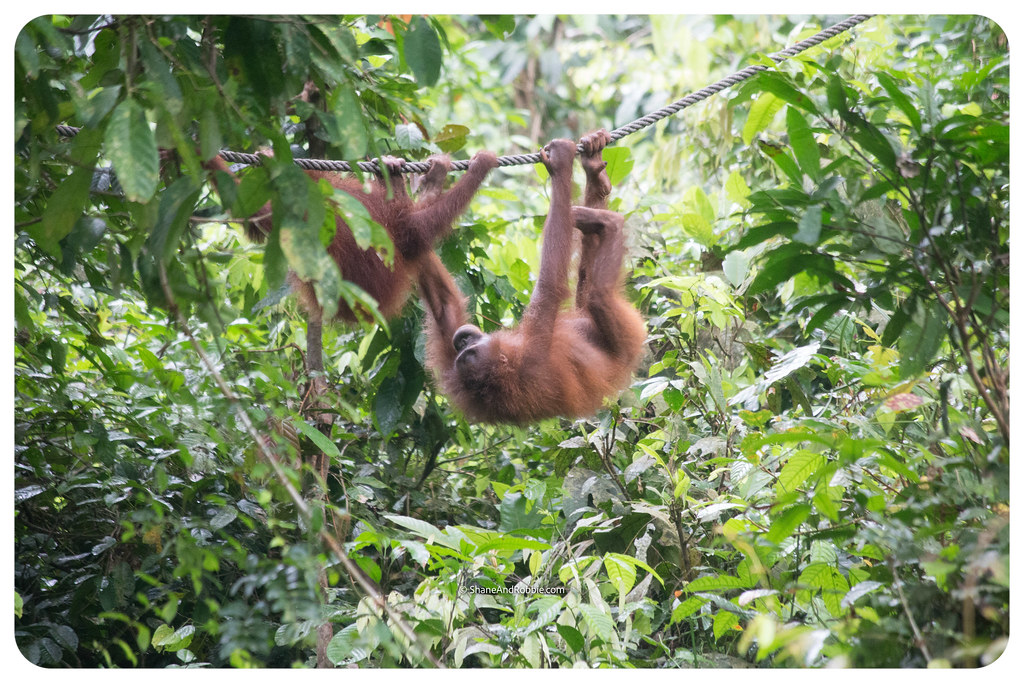 SORC works on the principle of achieving “The 3Rs” – i.e. Rescue, Rehabilitate, and Release. Orangutangs come to the centre after being found injured, as illegally-kept pets, or orphaned and alone. Older animals are patched up as required and released back into the wild*, whereas youngsters are kept at SORC until they too are old and confident enough to be released. For this reason most of the orangutangs at the centre are young and ridiculously cute!

*Occasionally they will be brought an older orangutang who has been in captivity for too long, or is too injured to be returned into the wild. A few of these “long term” residents remain at the centre and have become regulars – appearing in many photos over the years. Overall, though, the centre rehabilitates and returns to the wild the majority of the orangutangs brought to them. 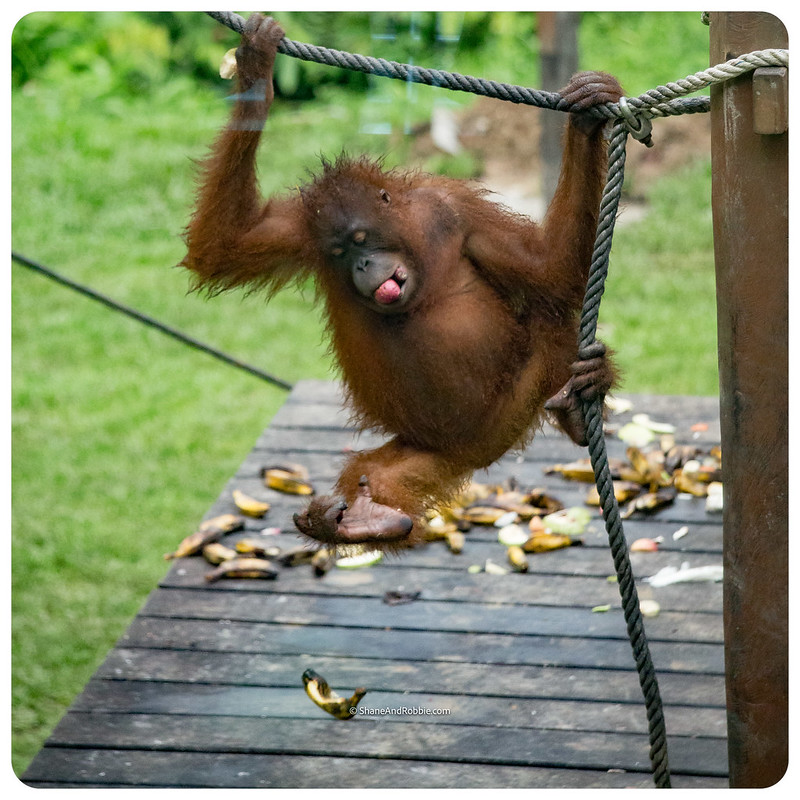 At the centre the young apes are taught important skills such as climbing, swinging, nest-building, and foraging. They have even set up a viewing area where you can sit behind one-way glass and watch the youngest orangutangs develop their skills on the purpose-built jungle-gym. We spent hours in this part of SORC watching the antics of the baby orangutangs. With their fuzzy orange hair, funny little bald bellies, and large expressive eyes, baby orangutangs are definitely one of the cutest critters on the planet*.

*SORC runs a very successful orangutang adoption program where visitors can “adopt” an orangutang for a nominal fee and receive regular updates on the progress of their adoptee. The money you donate goes towards feeding, housing, training, and rehabilitating the baby orangutangs. It’s a great way of raising funds and, from what we saw today, is a very popular charity endeavour – there were loads of tourists queueing up to sign up for the program when we were there. 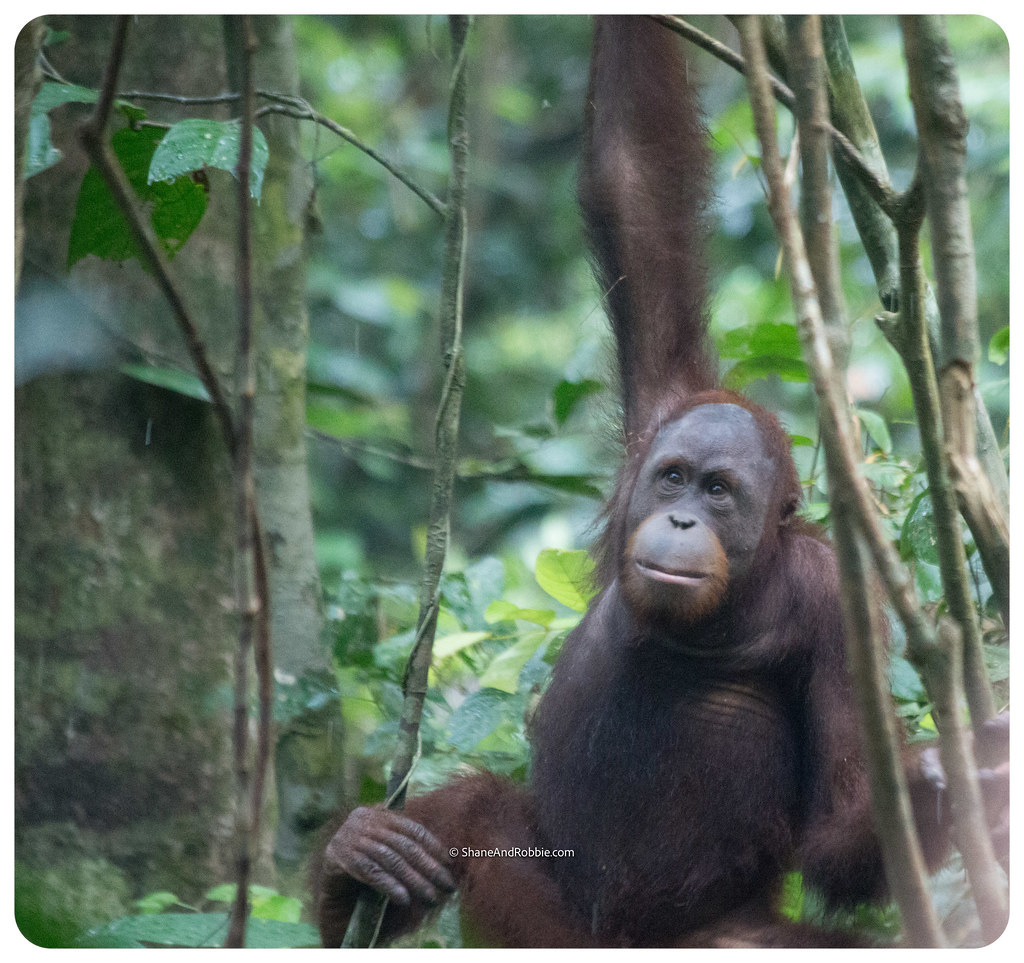 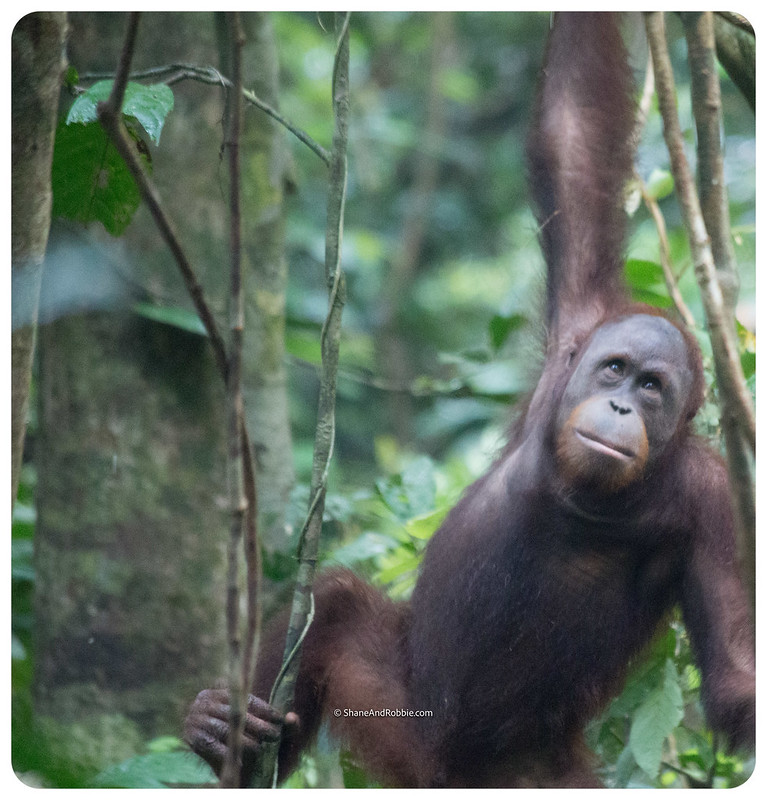 What fascinated us most is that the sanctuary is not fenced in at all – they keep the orangutangs coming back through regular feedings, but the rest of the time the animals are free to explore and utilise the jungle. It’s a great way of ensuring the youngsters develop their awareness and confidence of what living in  the jungle means. They DO have security guards and staff on site and patrolling the jungle to dissuade poachers, but otherwise the forest remains unspoilt and untouched. So much so that you have every chance of spotting a whole range of other wildlife at SORC – we saw monkeys, snakes, and a number of bird species whilst we were there. 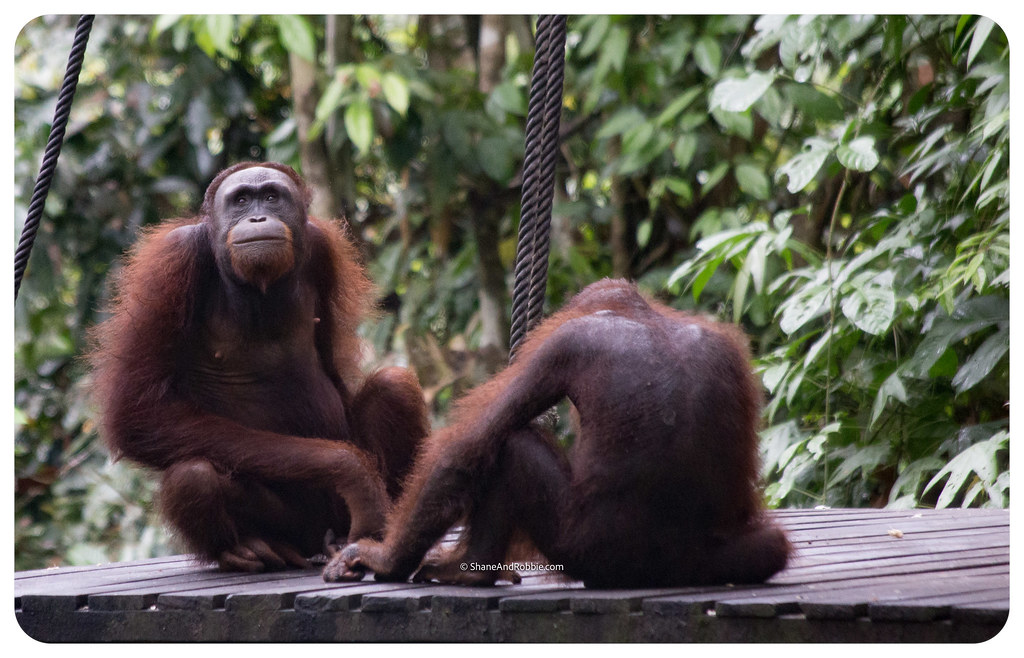 We stayed most of the day the centre and saw the afternoon feeding as well as the morning one. The morning feeding session was horrendously packed with tour groups and would not be the recommended time to attend – we felt a bit like WE were the animals in that session, being herded along like a pack of dumb animals. The afternoon session was far less crowded and we actually got to just relax and watch the orangutangs swing in, down out of the trees, towards the feeding platform. 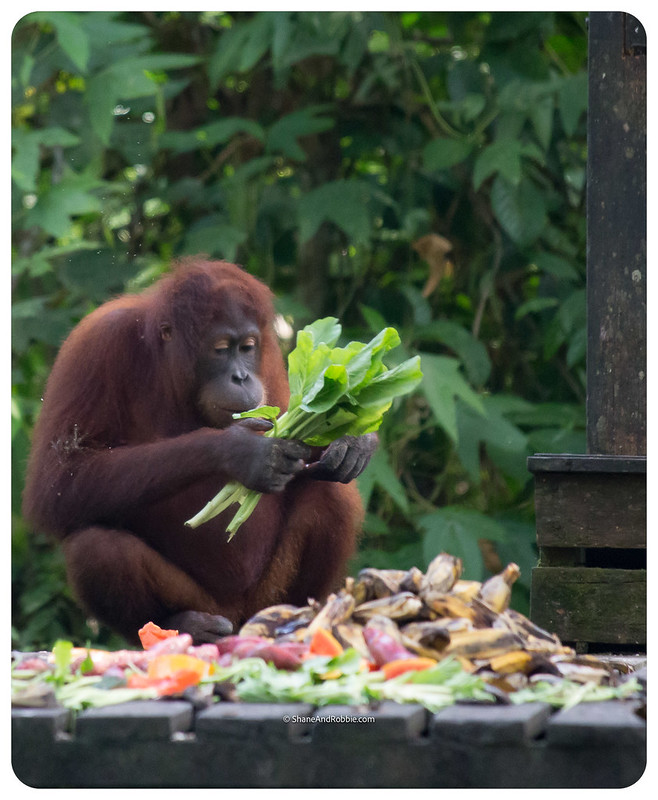 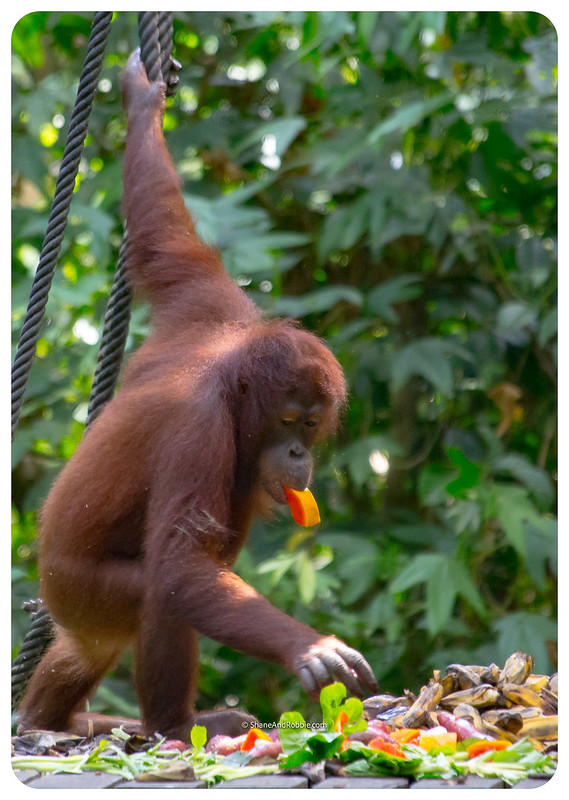 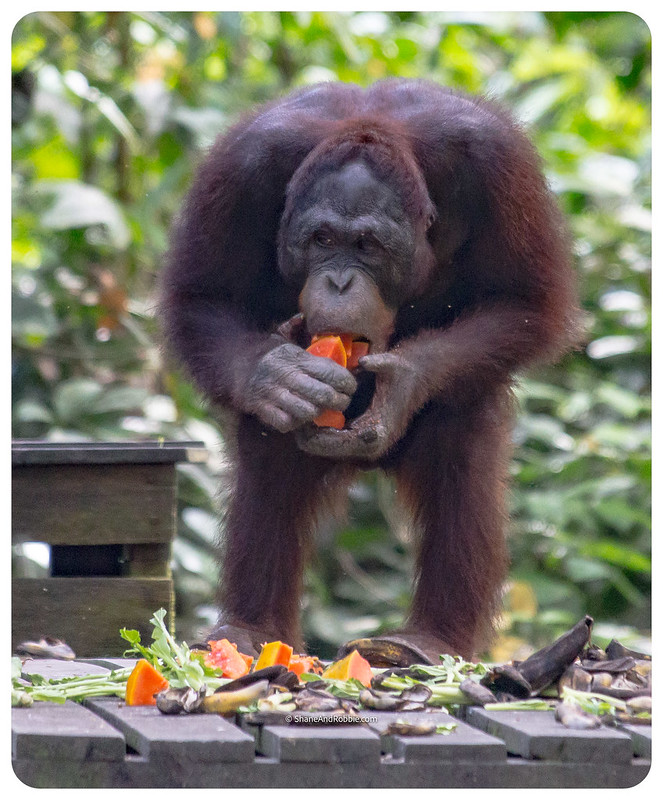 In the afternoon session we got to see a mother and her 4 week old baby come down for lunch/dinner. The tiny orangutang was so cute – seeing her was one of the highlights of the day. The hair on that little orange ball of fur was especially amusing. 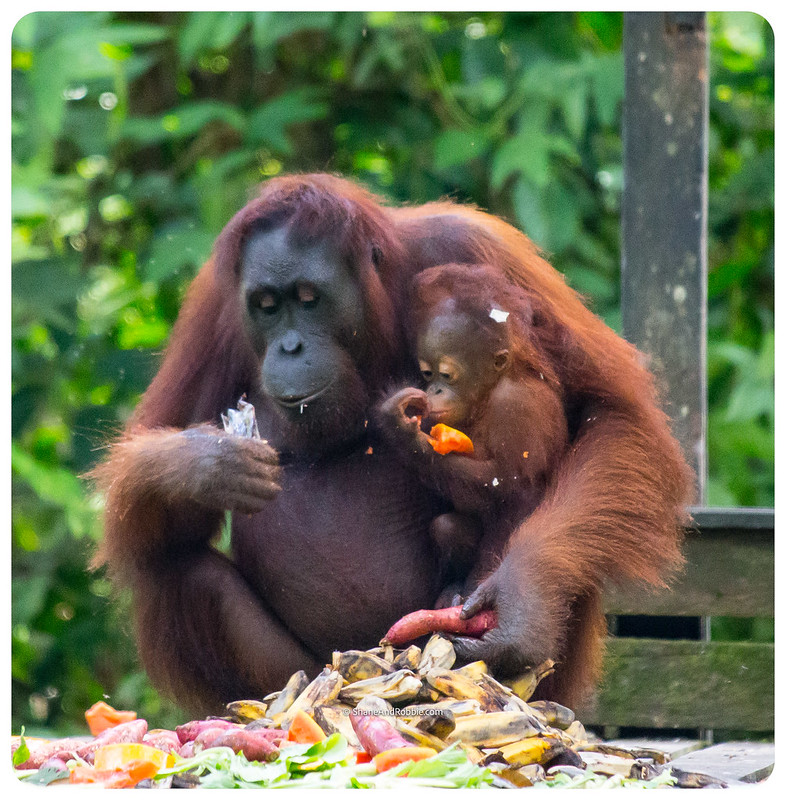 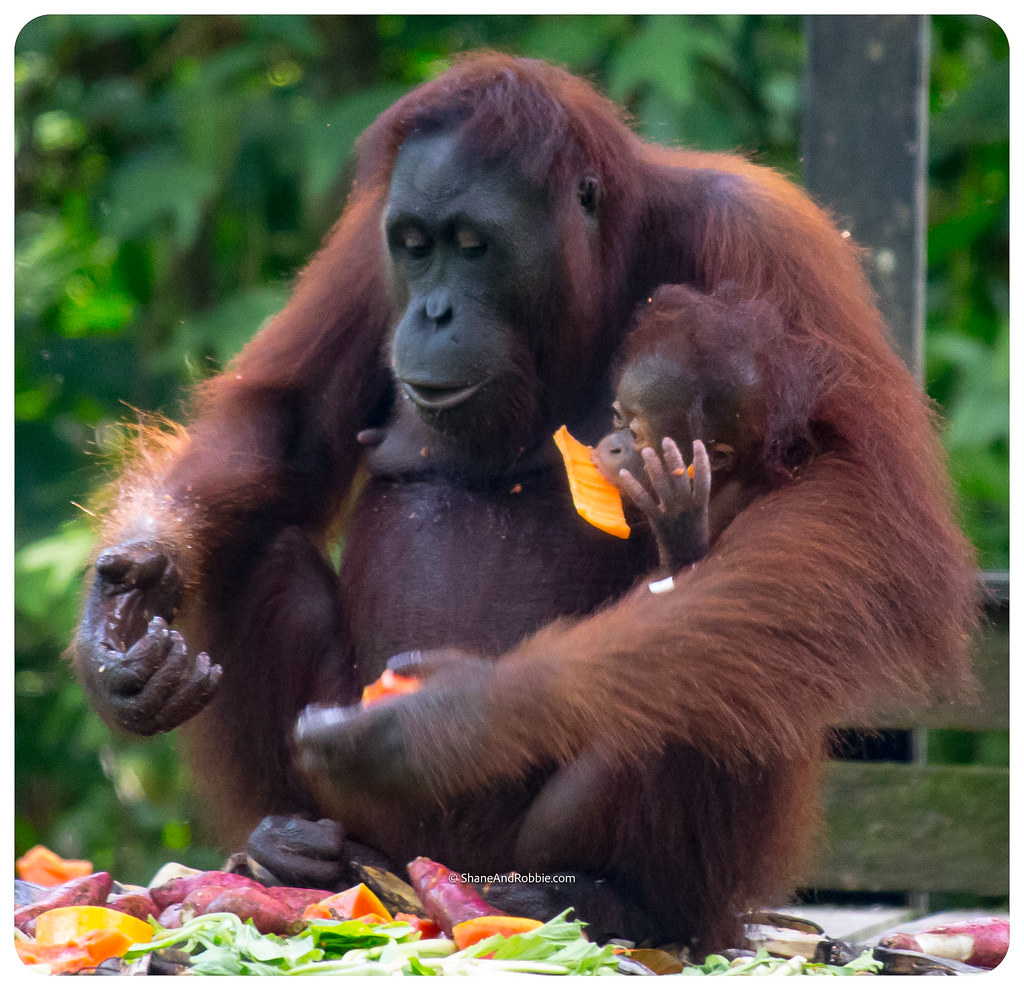 Watching these wild (but habituated) creatures at such close proximity was wonderful and an absolute highlight of the entire trip. The fact that there is a need for an orangutang rehabilitation centre is sad, but the fact that it exists is fantastic. And the way the centre is run is great; they do a lot to educate visitors, raise awareness of the plight of orangutangs in Borneo, and raise funds in a way that doesn’t seem at all commercial or distasteful. For anyone looking to come to Borneo we would say: put Sepilok Orangutang Rehabilitation Centre on the itinerary – it’s worth it! 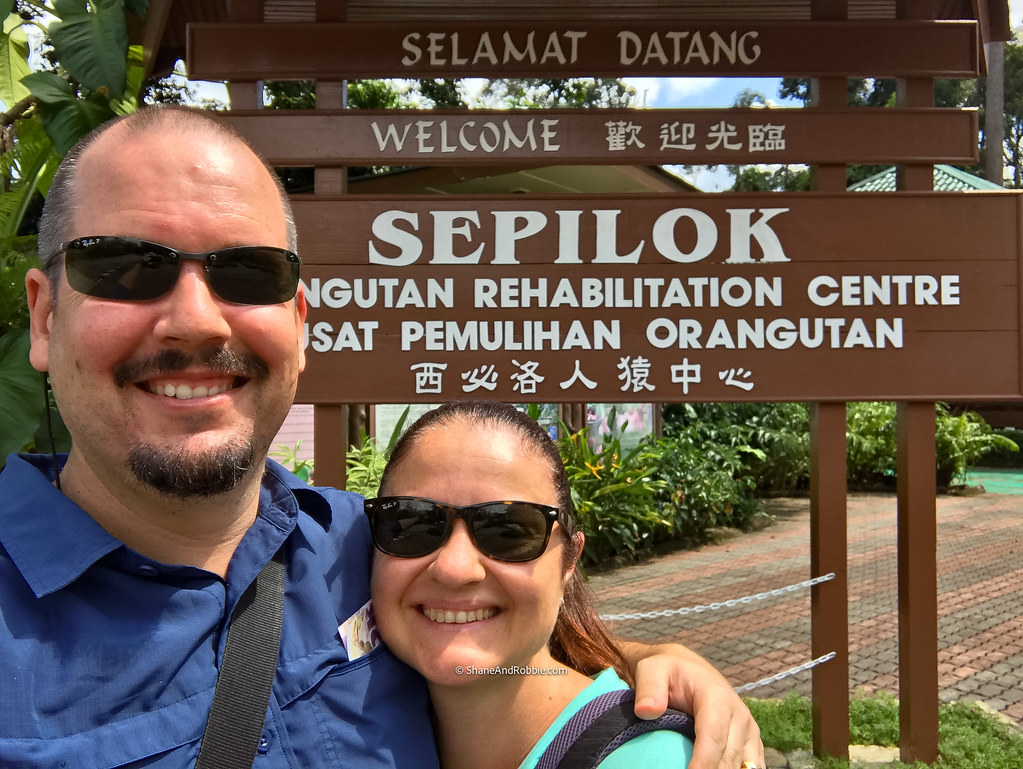