As well as the Sepilok Orangutang Rehabilitation Centre, there are 2 other wildlife sanctuaries around Sandakan:  the Bornean Sun Bear Conservation Centre and the Labuk Bay Proboscis Monkey Sanctuary. We visited both of these today to see some more of Borneo’s amazing wildlife up close and learn a bit more about them. 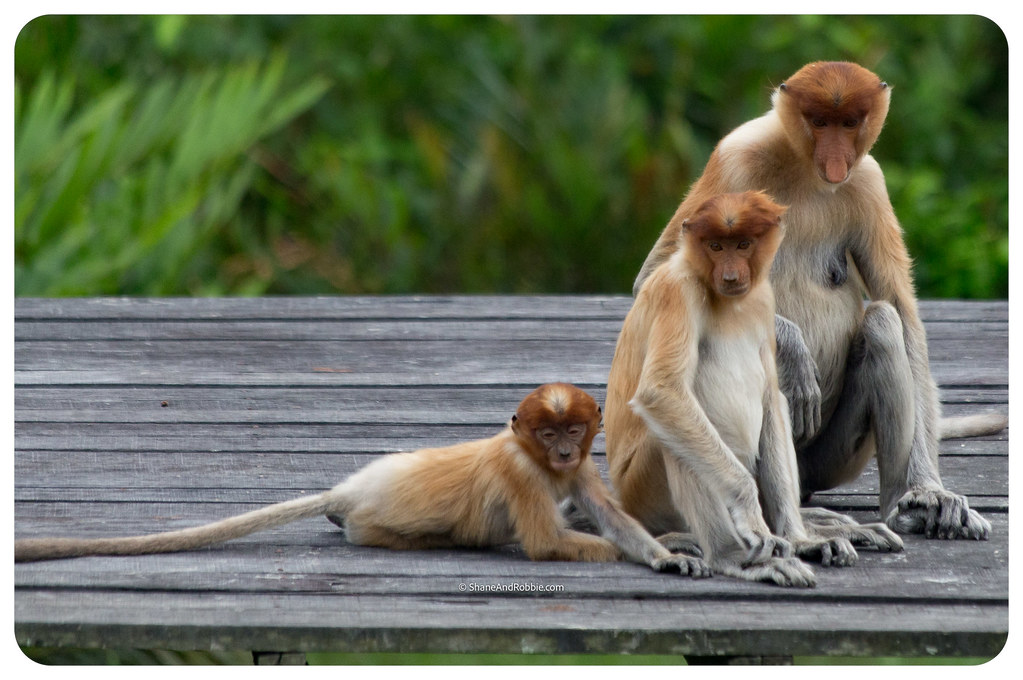 Sun bears are the smallest member of the bear family, living an insular life in the dense forests of Asia. Historically found throughout Asia, from southern China to eastern India and as far south as Indonesia, sun bears, take their name from the golden patch on their chest, which legend says represents the rising sun. We learned today that every bear’s golden chest hair pattern is as unique as our fingerprints. 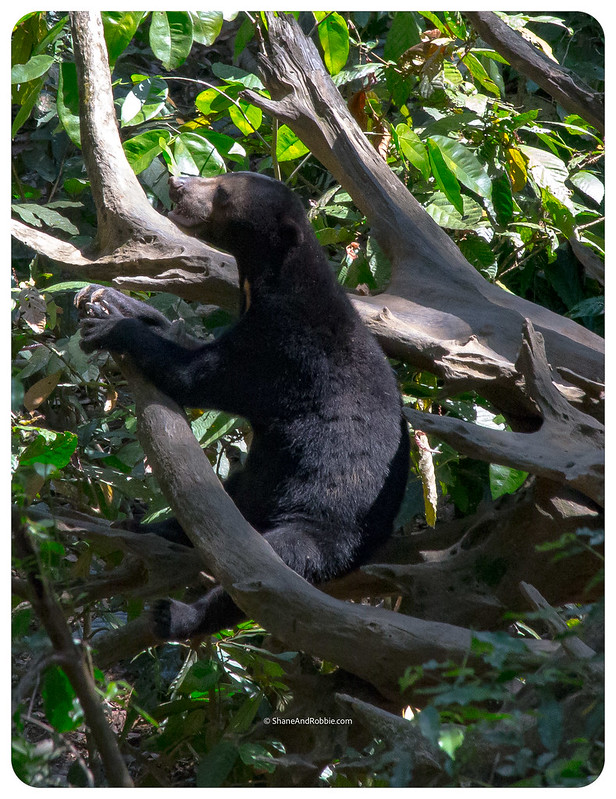 These small bears are endangered, with habitat loss a major threat to remaining wild populations. Poaching is another serious threat to these quiet ursines, with young bears captured for sale as exotic pets and older bears enslaved for their valuable gall bladders. 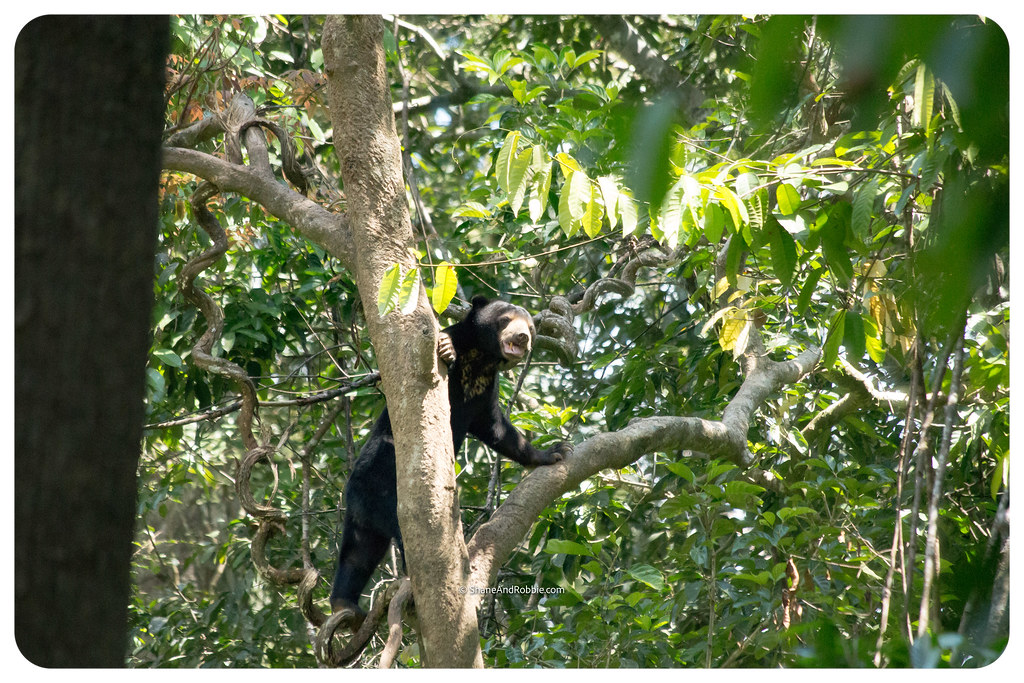 Sun bears are the primary bear species targeted for the bear bile trade in Southeast Asia, and are often rescued from bear farms where their gall bladders are “tapped” and “milked” for valuable bile in a truly horrific form of animal exploitation. The commercial production of bear bile feeds a growing demand from increasingly wealthy, yet ignorant and superstitious peoples, who believe that bear bile and/or gall bladder itself is a valuable medicine. Even more horrendous, though, is that the mechanisations of capitalism has now turned bear bile from a traditional medicinal ingredient to a commodity with bile now found in products like cough drops, shampoo, and soft drinks. 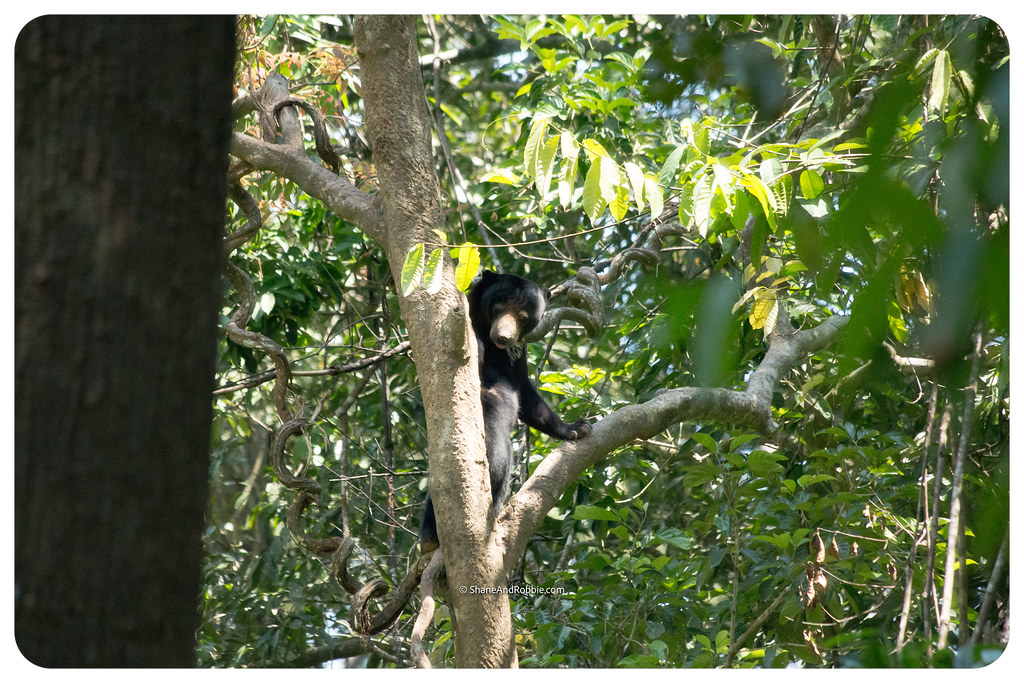 We learned all of this at conservation centre today, along with some more pleasant facts about the bears themselves, how they live, and their habits. We learned, for example, that (somewhat ironically) sun bears are actually nocturnal. They lumber through the forests by night, snacking on fruits, berries, roots, insects, lizards, and rodents. They have an excellent sense of smell and extremely long claws, exceeding four inches in length, which they use to rip open hives and termite nests. They also have an almost comically long tongue for extracting honey from bee nests, giving them their other moniker, “honey bear.” 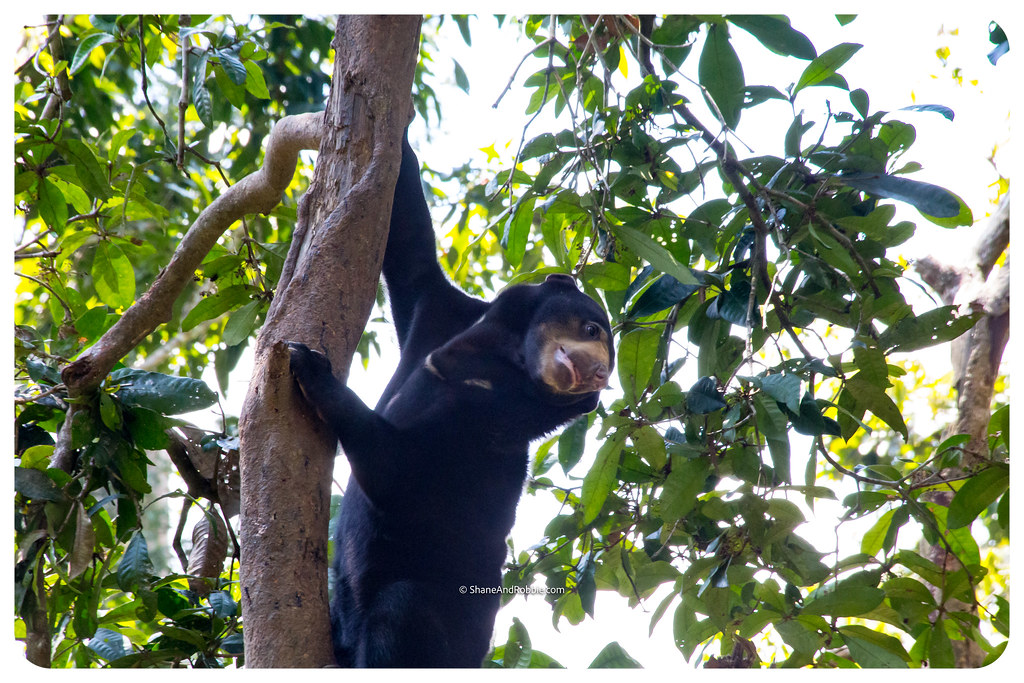 The Sun Bear Conservation Centre is a rehabilitation* and research centre that takes in rescued bears from all over the world.  Established in 2008, it is a a non-profit, joint venture run by sun bear researcher Wong Siew Te, and the Malaysian government. It’s main aim is to raise public awareness about the plight of the sun bears and to increase our understanding of this elusive, shy species.

*Unfortunately most of the rescued bears that have come from captivity are so badly affected by their experiences that they cannot be rehabilitated. For these bears, therefore, the centre represents a safe haven – a long term home safe from poachers. That safety requires a lot of fences, however, making the sun bear enclosures seem far more like a zoo than those at the orangutang centres nearby. 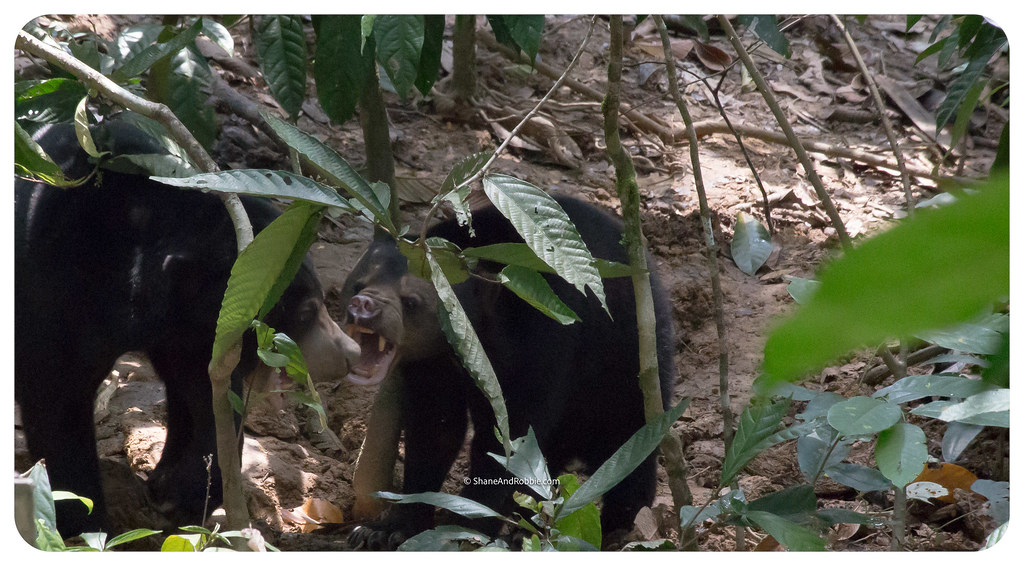 Another of Borneo’s endangered animal species that is being protected and researched here is the proboscis monkey. We visited the Labuk Bay Proboscis Monkey Sanctuary this afternoon to see some of these primates up close. 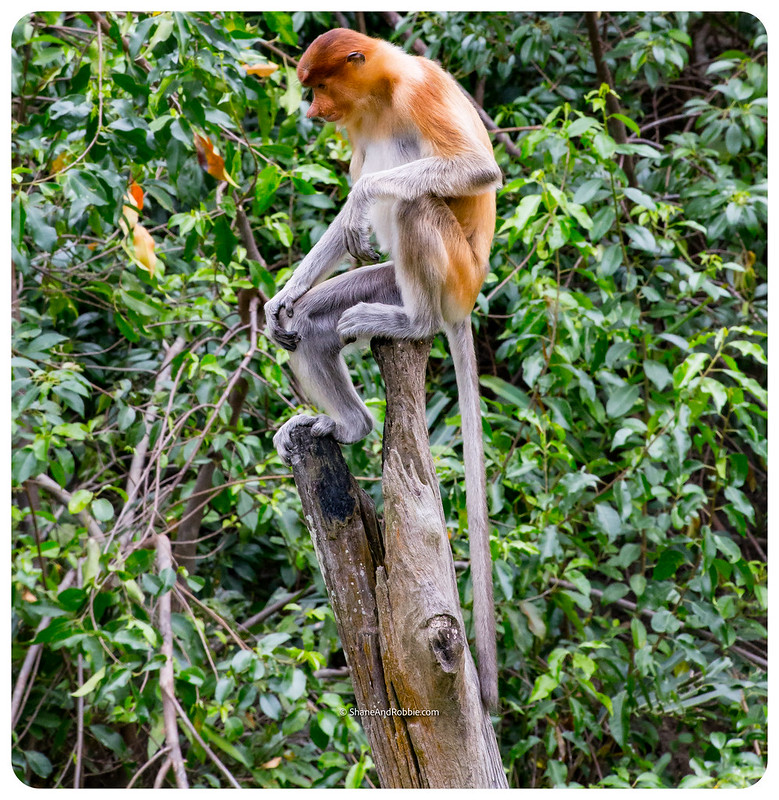 Unlike the Sepilok Orangutang Rehabilitation Centre and the Sun Bear Conservation Centre, Labuk Bay Proboscis Monkey Sanctuary is privately owned and not as focussed on research or education as the other centres. The centre is owned by a palm oil plantation owner who had originally planned for the whole area to be planted with palms. During the development of the site, however, numerous colonies of native proboscis monkeys were uncovered. The owner of the plantation decided to spare fragments of the animals’ natural habitat and to develop it as a tourist attraction. 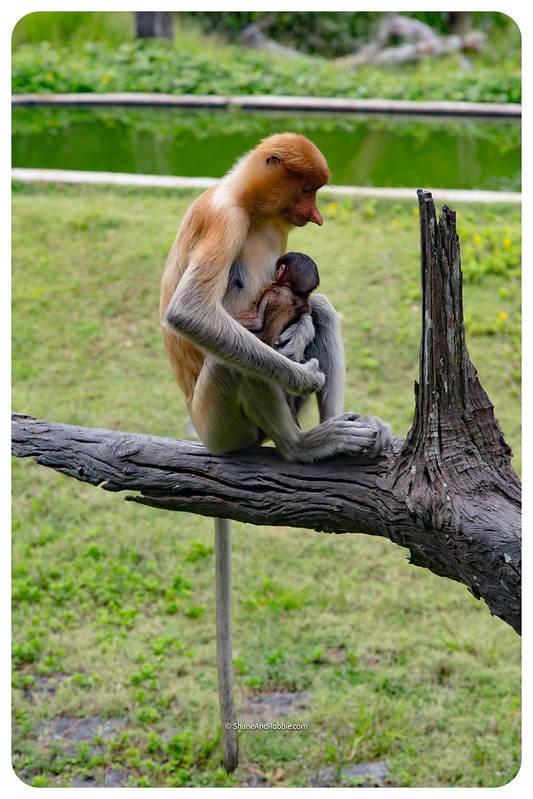 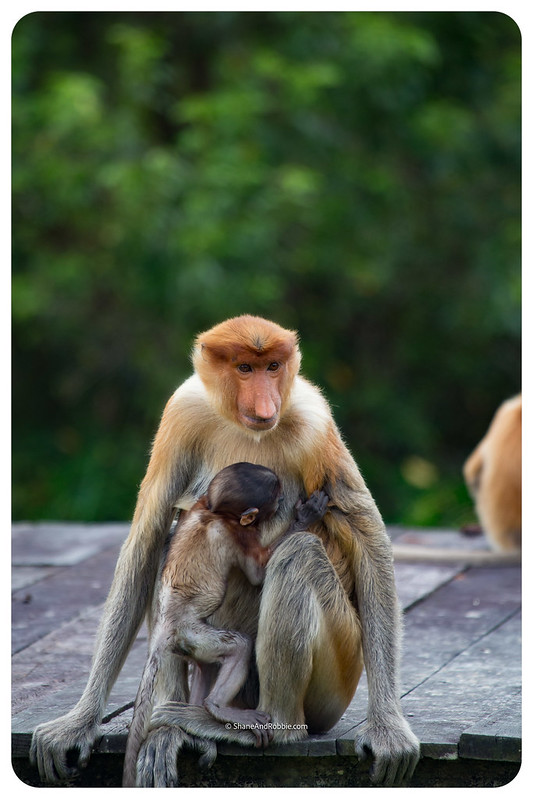 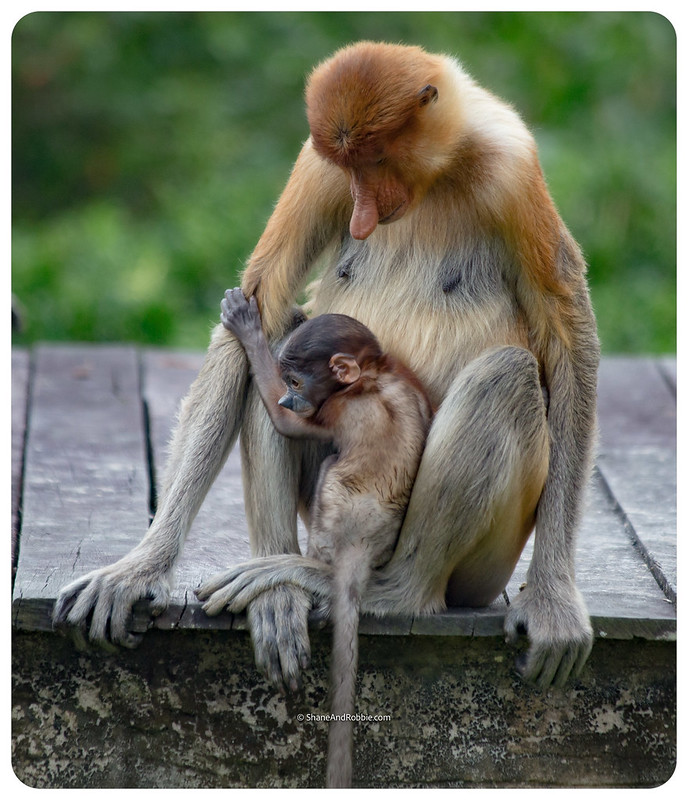 The sanctuary is composed of fragments of mangrove habitat where the proboscis monkeys live. Each area has man-made feeding platforms and a covered viewing deck from which tourists can watch the monkeys being fed.  It certainly provides an opportunity to see these surprisingly large primates up close, but doesn’t have the same impact as the other centres – it really just feels a bit more like a purely commercial enterprise and there is little to no effort made to educate visitors about the monkeys or to raise awareness of their plight. 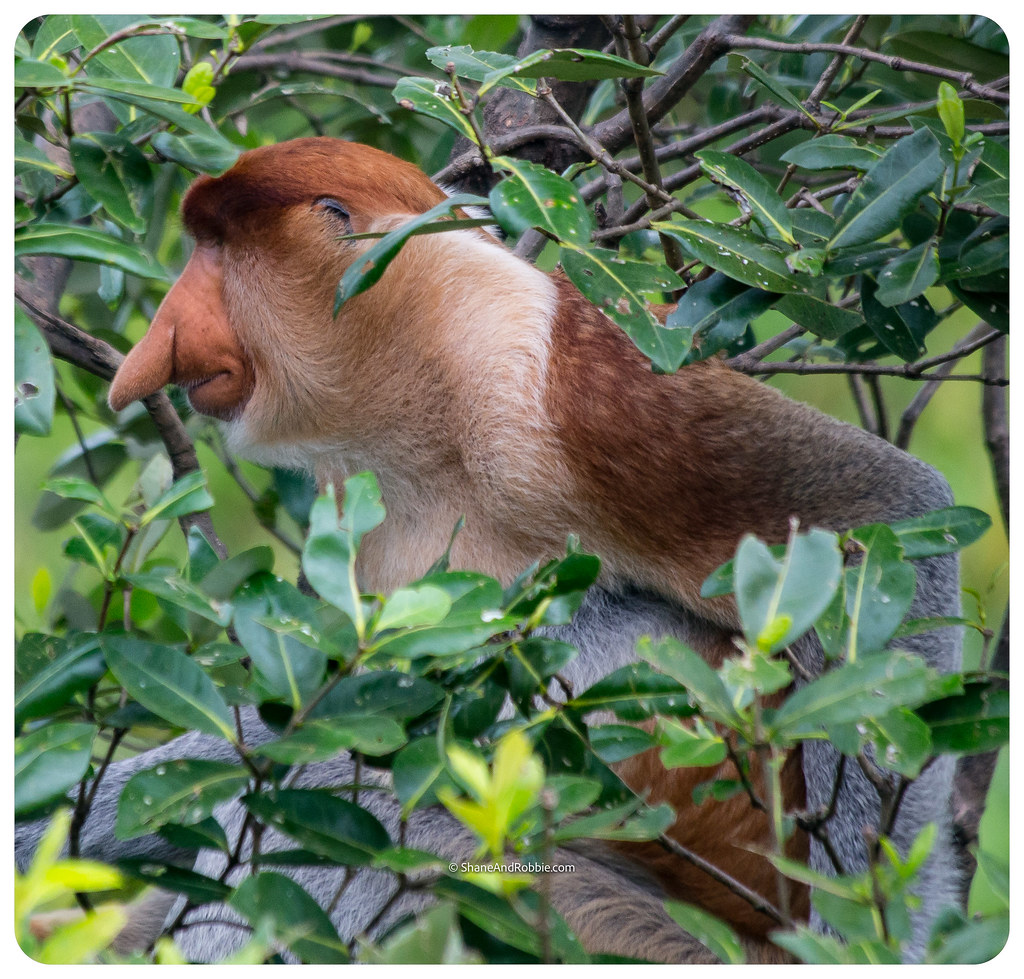 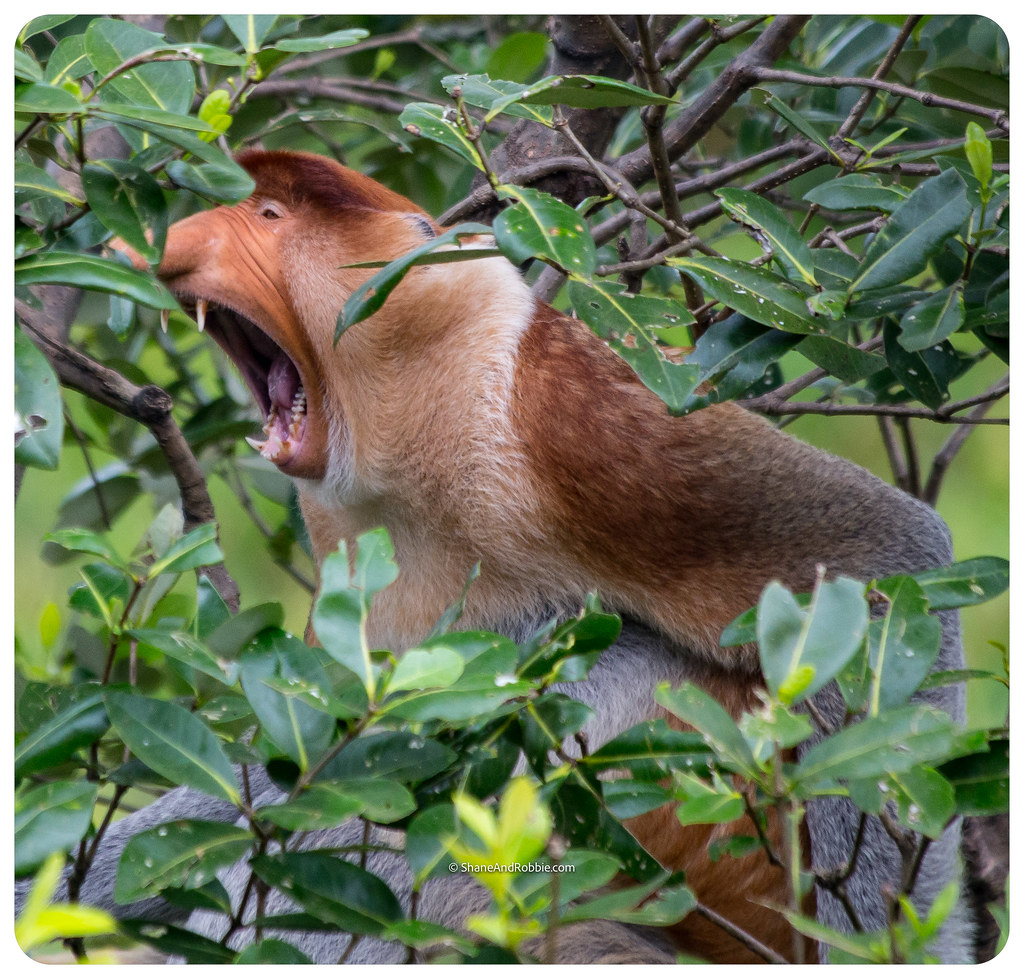 Having said that, there were 4 large troops of monkeys there when we were there, with each of the 4 big males very vocally protecting his harem of females. Turns out male proboscis monkeys use their fleshy, pendulous noses to attract mates – these fleshy organs create an echo chamber that amplifies the monkey’s call, impressing females and intimidating rival males. They live in harem groups consisting of a dominant male and up to 7 females and their offspring. The males are twice the size of the females, reaching a weight of up to 24kg. With their large fangs and significant size, these monkeys are quite intimidating – as we found out when one sprung onto the viewing platform right in front of us and started asserting his dominance. He was quickly shooed back to the feeding area by one of the staff, but for a moment it was quite scary! 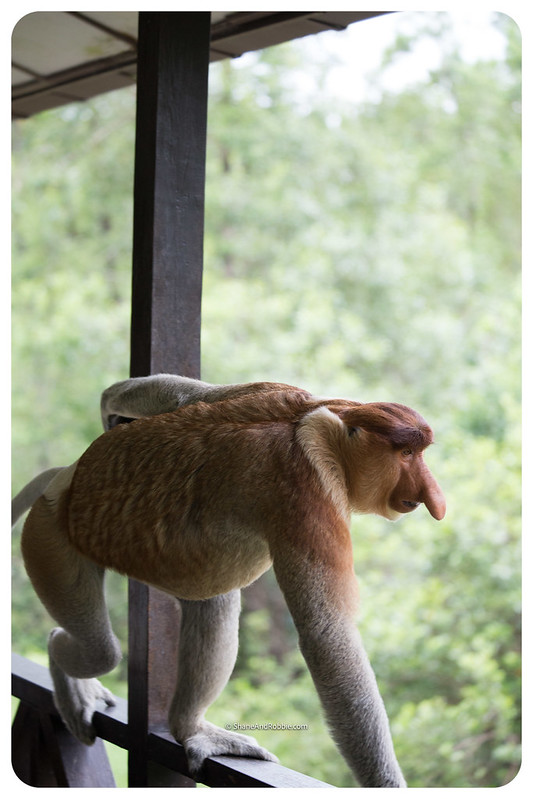 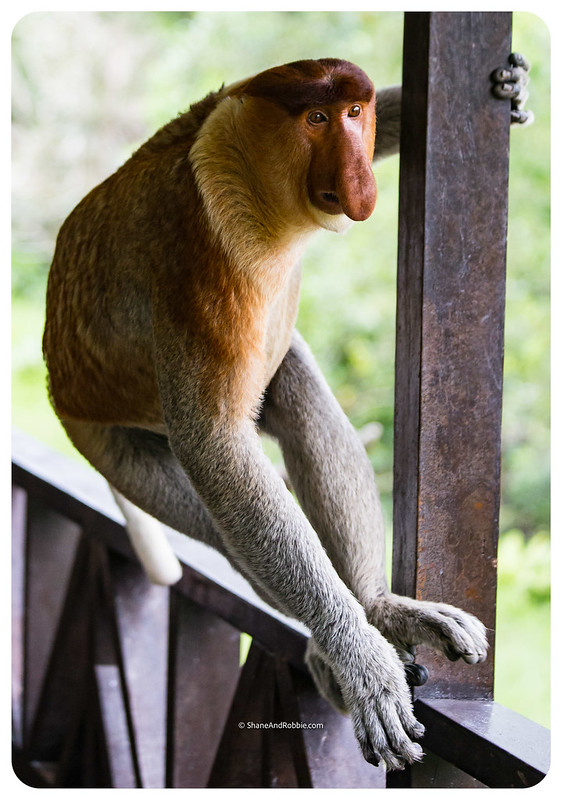 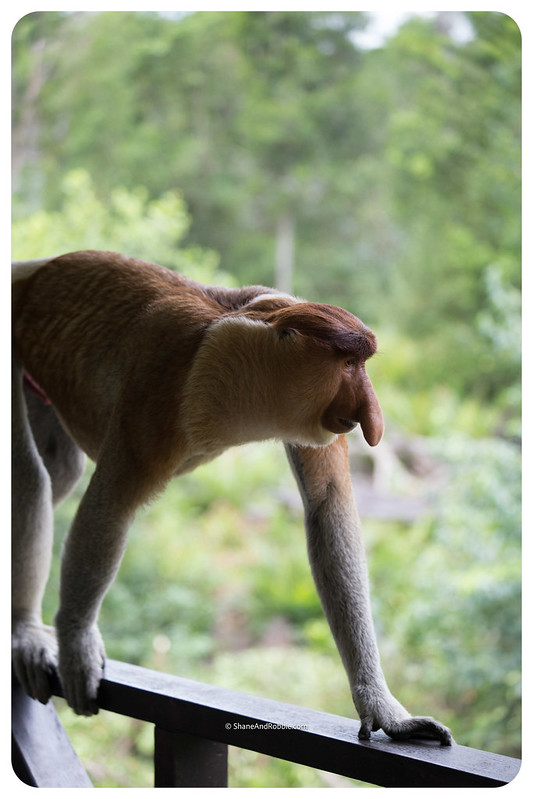 With their huge pendulous nose, these monkeys are truly unique and quite fascinating. They are an endangered species found only in Borneo and face the “usual” threats: habitat destruction from logging, plantations, human settlement, and forest fires. Additionally this monkey is illegally hunted for food and as a medicine*. Unfortunately proboscis monkeys have a tendency to move quite slowly, which makes them easy targets.

*Since every male entertains a harem of females, it is thought that eating certain parts of the male proboscis monkey endows the human male with sexual strength and fortitude. Idiots. 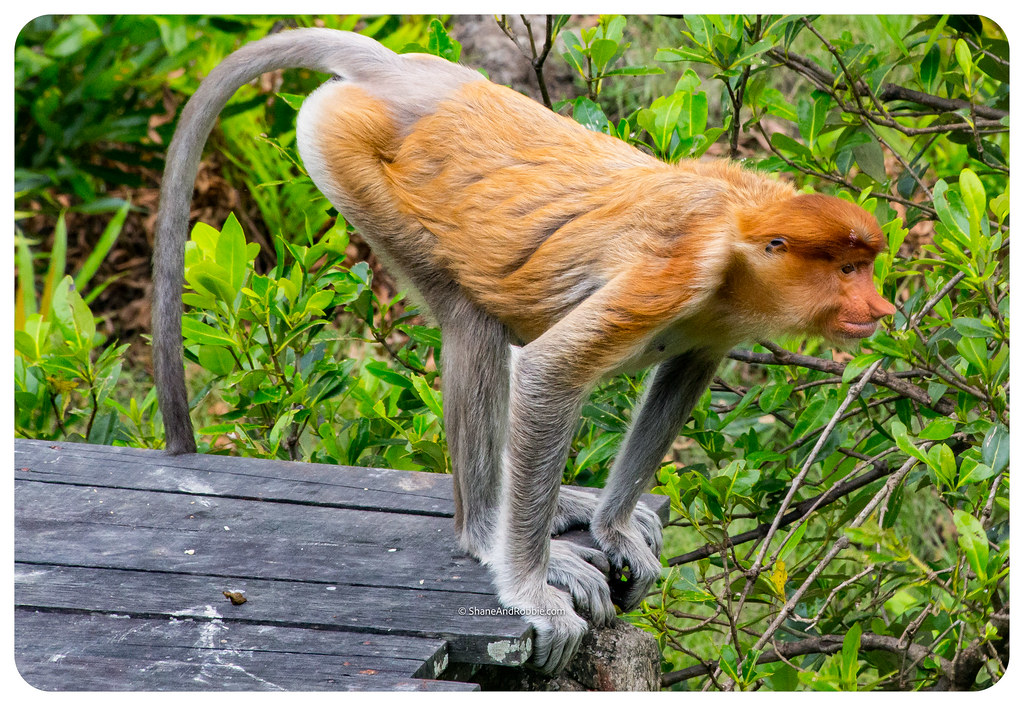 Proboscis monkeys live in the coastal mangrove forests of Borneo, preferring the wetlands and swamps to inland jungles. They are an arboreal species and will rarely venture onto land; though they’re not afraid of jumping into the water and swimming around in search of food. So comfortable are they in the water that proboscis monkeys have even developed webbed feet to help them out-pace the crocodiles they share their watery homes with. 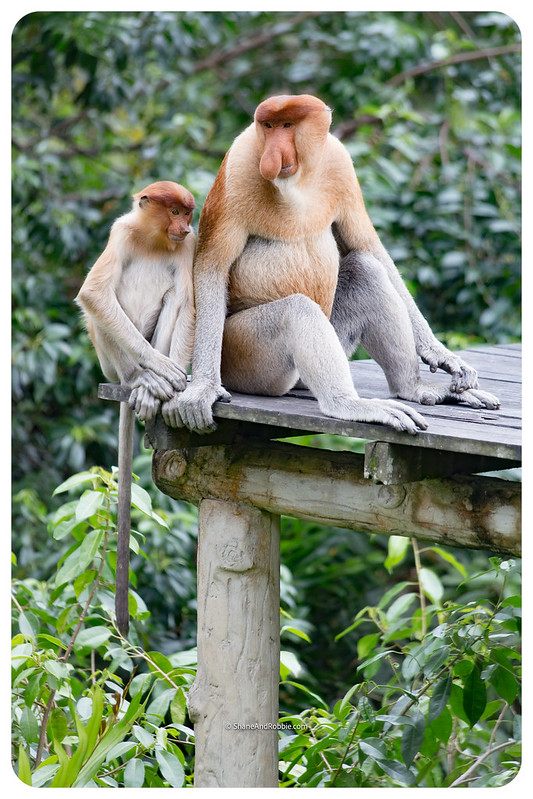 As well as their pendulous fleshy nose, the other distinguishing feature we noticed is that these monkeys all have enormous pot-bellies. Seems their diet of leaves, seeds, and unripe fruits has to be fermented by symbiotic bacteria living in their digestive tracts to provide them with adequate nourishment. It’s all that fermentation gives these critters their rather interesting profile. 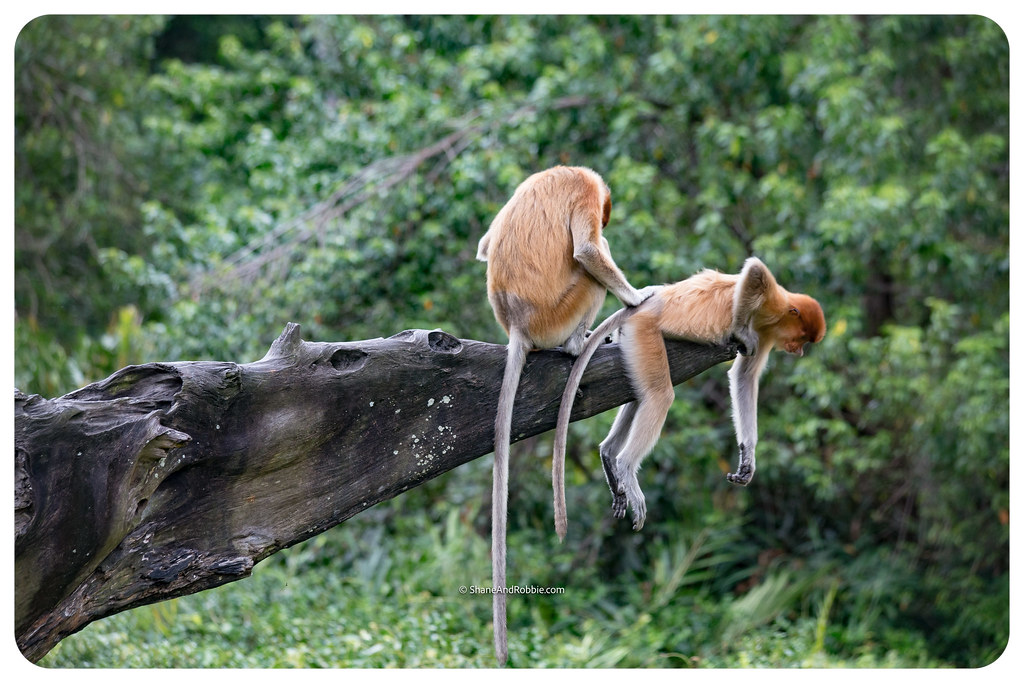 All is all, our days spent visiting wildlife conservation centres and sanctuaries in Borneo has been a nice counter-point to seeing these creatures in the wild. We have learned so much more about them and come to appreciate how close to extinction many of them are. There has been both sadness and joy for us, however, in seeing the efforts being made to keep these animals alive and to increase awareness of their plight. Whether these efforts will be enough remains to be seen however… 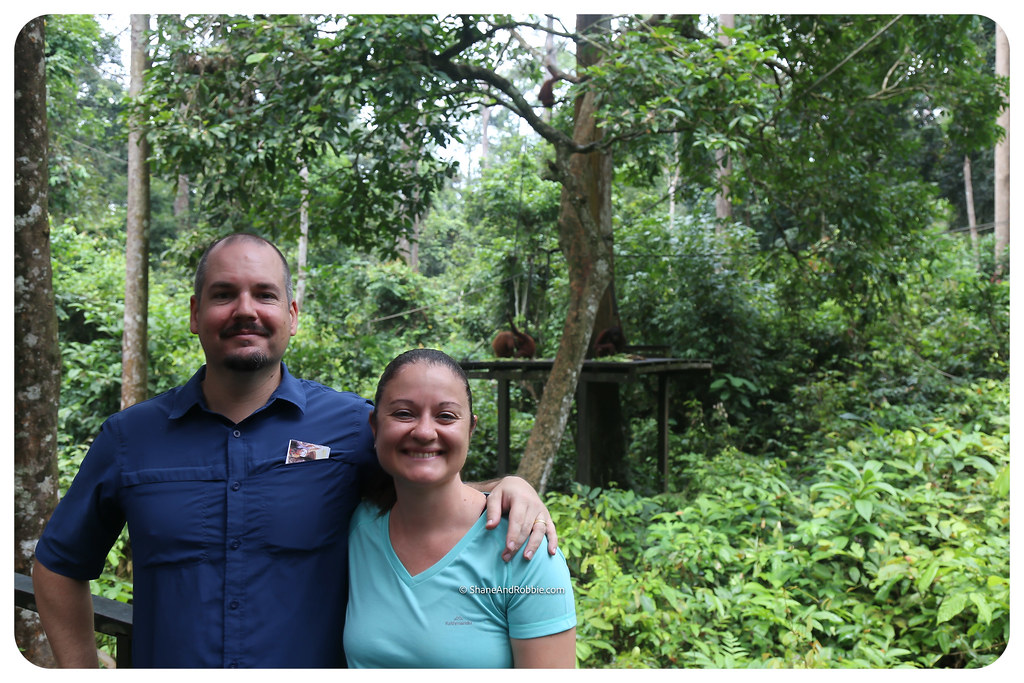